My 40 year old, sedentary friend has a goal of running a 5k in 18 minutes.  We all think he's crazy, but support him in his quest for such a goal.  Last night while sitting around talking I decided to spontaneously run a 5k and time it just for fun.  The last time I ran a timed 5k was 16 years ago in college where I clocked a time of 21:30.  I've ran less than 20 times since then because I really dislike it.  Running is boring and slow.  All I keep thinking about is how much more distance I could cover on roller blades or a bicycle.  Anyway, I took off in the 101 degree heat and kept a good pace where I was breathing hard, but not on the verge of hurling my cookies.  My time was 23:10.  Not bad for a 37 year old guy who dislikes running.  I have no aspirations of ever doing that again unless I'm being chased by a wild animal or the police, but you never know...

Easton's my adventure boy.  They had a camping day at school where they made binoculars out of toilet paper rolls and a safari visor from construction paper.  He was so excited about the gear that he's probably still wearing it in bed. 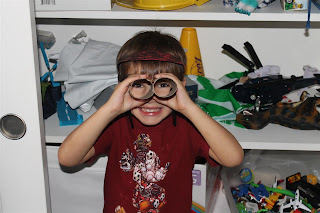 Even though Kendra has arachnophobia, Easton has a squishy spider toy and now a spider ring which he proudly wears.  Ouma would not be amused, but I love how Easton isn't phased one bit by the screams and expletives when a real creepy crawly thing is discovered. 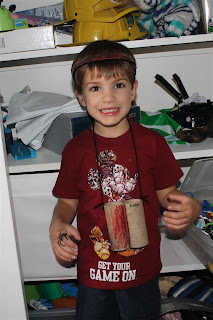 He seriously has an interest in animals and everything in the world.  We ate at Arby's and he asked, "why do they put the little black seeds on top of the bun?"  I had NO answer.  Easton said, "Ask your phone?"  I told him it (Google) probably wouldn't have the right answer either. Then he insisted we ask the "baker" in the back to tell us.  We stood at the counter for a couple of minutes while the cashiers served the people in line.  Then Easton asked one of the cashiers who stared at him like a deer in headlights.  She turned around and screamed some Hispanic name I can't remember.  Apparently he was the boss.  He walked to the front expecting to deal with some disgruntled old lady.  I know this because he was very hesitant until Easton blurted out his question.  By this time the entire staff of Arby's was asking the question of each other and all they could come up with was a collective shrug of the shoulders.  Oh well.  I guess there are some questions that just can't be answered.  His Pre-K teachers have their work cut out for them to satisfy his inquisitive nature.

Our coffee table in the great room became the lounge for Easton and Layla.  We don't allow them to climb on furniture as a general rule, but this table is more a part of their playground equipment than our usable furniture.  It works so well because it is out of the viewable area of the Xbox Kinect sensor, but still close enough so they can watch as Kendra plays Disneyland.  They looked so sweet and best-friend-like I had to grab the camera for a picture.  Nobody said, "make a silly face", but since I neglected to say DON'T make one, this is how it came out. 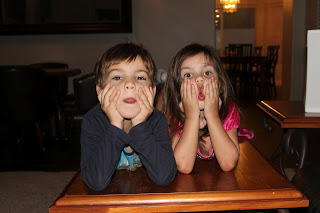 Our minuscule free time this week is focused on getting the house ready for the Smith boys' birthday party on Sunday at our house.  We are excited to host their big celebration!