Today was a special day for the twins and I.  Father's Day is traditionally in June when school is not in session.  Their school shifts the celebration day to late September so we can have a daddy day together.  They were extremely excited all week.  I was the first Dad to walk in their classroom when the doors opened.  They greeted me with the usual enthusiasm of a roller coaster ride.

All the Dads filed in and were treated to a couple of A cappella songs.  I captured one on video and enjoyed the other one because I don't feel the need to record every single moment, but instead chose to enjoy it to the fullest.


and just in case the video doesn't load or gets taken down, here's a picture of them singing their hearts out. 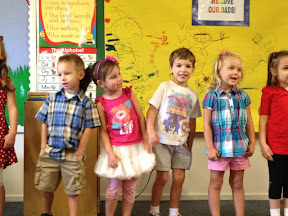 The big surprise of the day was sharing brownies they made and ice cream.  For me it wasn't much of a highlight, but everyone else seemed excited about it.  Each Dad sat up front with their kid in their lap.  Or in my case, two kids in my lap.  Each Dad described their career and then whatever fun thing they like to do together with their child.  Most Dads said wrestling or camping or legos.  I chose a slightly different approach  because I am not normal.  I chose to describe what I like about each of the twins and the time we spend together.
For Layla, I love the moments we spend together at bed time.  I fill her spill-proof cup with ice cold water and kneel next to her bed.  She chooses a song from my ever-expanding portfolio and then lays on her tummy so i can rub her back while singing in the glow of the nightlight.  Our time always ends with a hug and kiss and covering her with her special blanket.
We swung together in the playground outside where she proudly showed me her skills.  A few times i thought she might go all the way up and over because she was swinging so high. 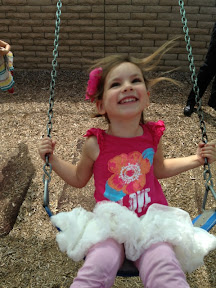 For Easton, I love the moments we spend together in the morning.  He wakes up at 7:15 AM with greater accuracy than England's Big Ben.  I hear his little feet patting across the tile floor into our bedroom as my alarm ringtone.  He crawls into bed with me and cuddles up close.  The first words out his mouth every single morning are (in his whispering voice), "Daddy I'm hungry!"  I act surprised as if I had no idea he would say that.  then we get up together quietly and go into the kitchen.  Sometimes we share a single bowl of cereal and a single glass of OJ while sitting at his little table. 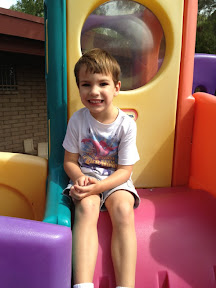 What I noticed most when the Dads shared in front of the class was how every one, except me and one other guy, focused entirely on what they DO together.  I struggle with that because we are human beings, not human doings.  I want Easton and Layla to know I love them and want to spend time with them no matter what we DO together.  The most important aspect of my relationship with the twins is not what we do together; it's that we spend quality and quantity time together.

During Daddy Day at school Easton pushed a huge bull dozer across the playground, digging a big pathway through the sand and tree bark.  I followed close behind with my oversized dump truck.  The other Dads congregated under the shade checking email on their phones, but it took a while for me to notice I was the only Dad getting dirty in the sandbox.  I'm amazed by how odd "normal" for me feels when I'm around other Dads like that.  I wasn't doing anything to make a statement or stand out or just for show.  Easton asked me to join him in playing with construction toys, but he knew I would do it.  He didn't come to me begging or expecting rejection.  He expects me to be an active part of his play time and I always am.

I'm not degrading other Dads.  I'm just trying to describe the contrast between what I live as "normal" fathering and how out of sync I am with what I see in other Dads.  Luckily I don't aspire to be like anyone else or compare myself on a competitive scale.

Every parent has heard the Golden Rule, even the Godless ones.  However, not many realize there is a passage before it that applies to parents:  “Which of you, if his son asks for bread, will give him a stone? Or if he asks for a fish, will give him a snake? If you, then, though you are evil, know how to give good gifts to your children, how much more will your Father in heaven give good gifts to those who ask him! So in everything, do to others what you would have them do to you"

I want Easton and Layla to ask me expecting a "yes".  Especially when it comes to being a part of their playtime and through the ups and downs in life.  If they make a bad choice, I want them to share with me so I can comfort them and say, 'I love you no matter what'.   I see some kids shy away from asking their Mom or Dad for their time because they feel rejected or have a warped sense of what is expected of a father.  If I say "yes" to being a part of their world now, then they will continue to ask me to be a part of it as they get older.

To prove my point, here is a picture from yesterday.  Kendra and the twins came by my work to drop off a paper.  I climbed in the car and said, "do you want to go play in the park?"  They said "yes!" and we spent my lunch hour playing Star Wars and climbing around in the playground equipment.  My work was still there when I returned from lunch, but someday soon i'll turn around and Easton and Layla will be heading off to college...  and my work will still be there. 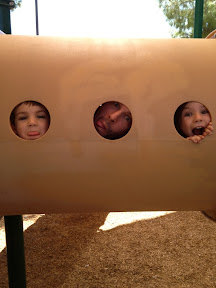