Back when I was a kid there was a doll called "My Buddy".  The cheesy lyrics of the jingle that got stuck in my head are: 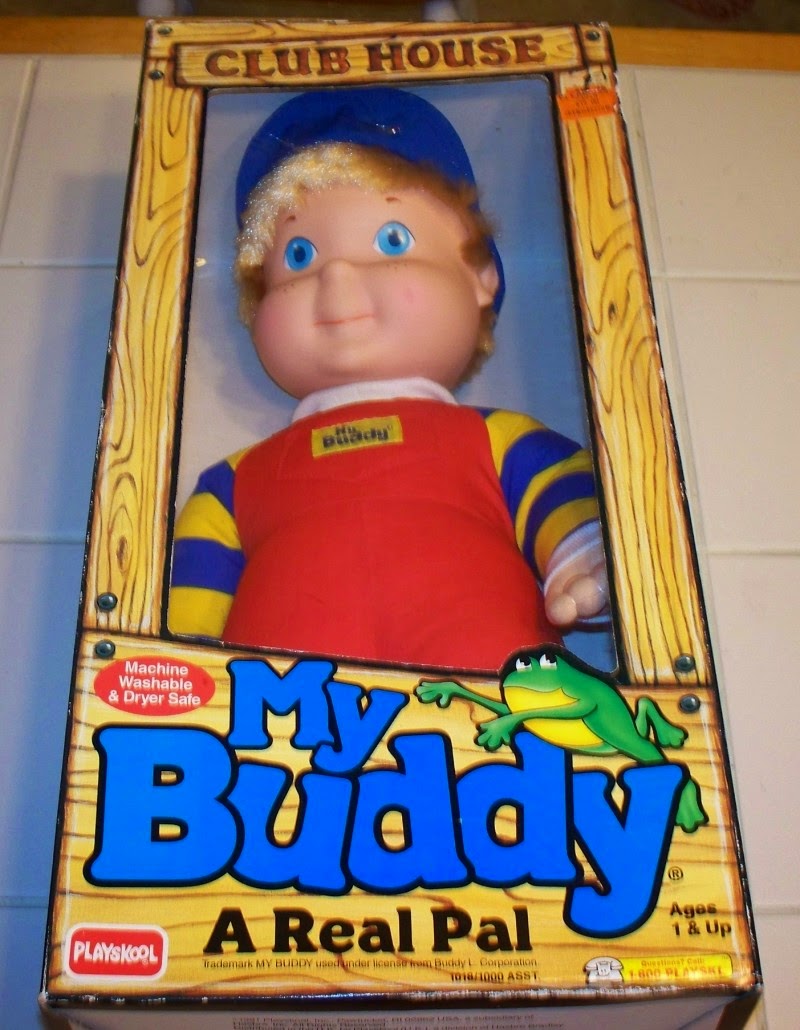 I never owned one of these, but when I think about Easton sometimes I see him as "My Buddy" in real life.  The line between parenting and being a friend is pretty clear at his age.  However, I am really enjoying this age where he wants to hang out with me and go adventuring.  He doesn't like to climb up a tree, but he's more than happy to go mountain biking with me. 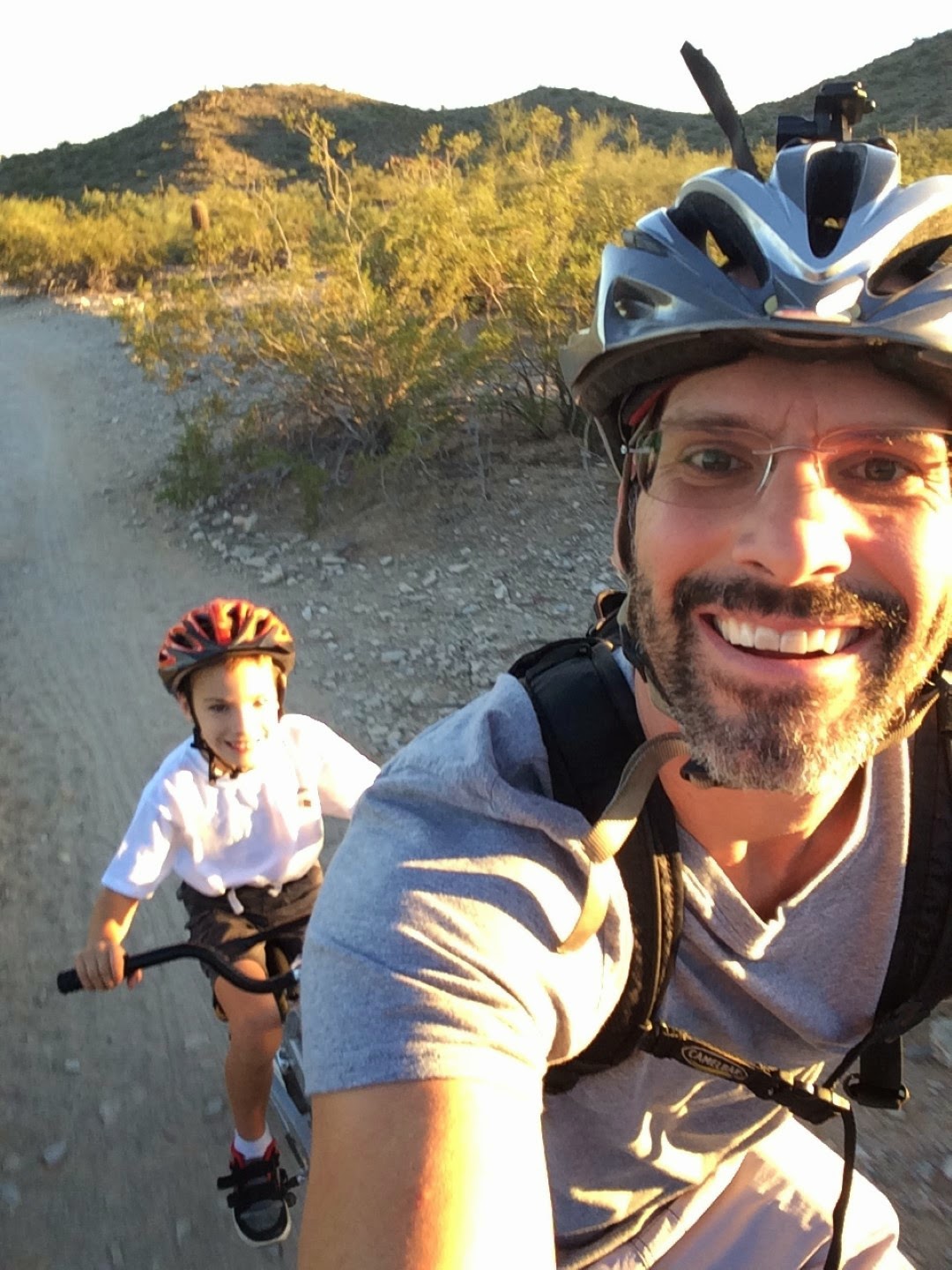 I took an evening to spend with Easton because I knew our time together this weekend and next week is going to really sparse.  I asked if he wanted to go for a mountain bike ride and he excitedly agreed.  It was my idea, but I gave him the freedom to suggest whatever he wanted us to do together.  We went for a sunset ride where he was connected to the seat post of my bike on a Trail-a-bike unit.  The view of the city was spectacular with the sunset. 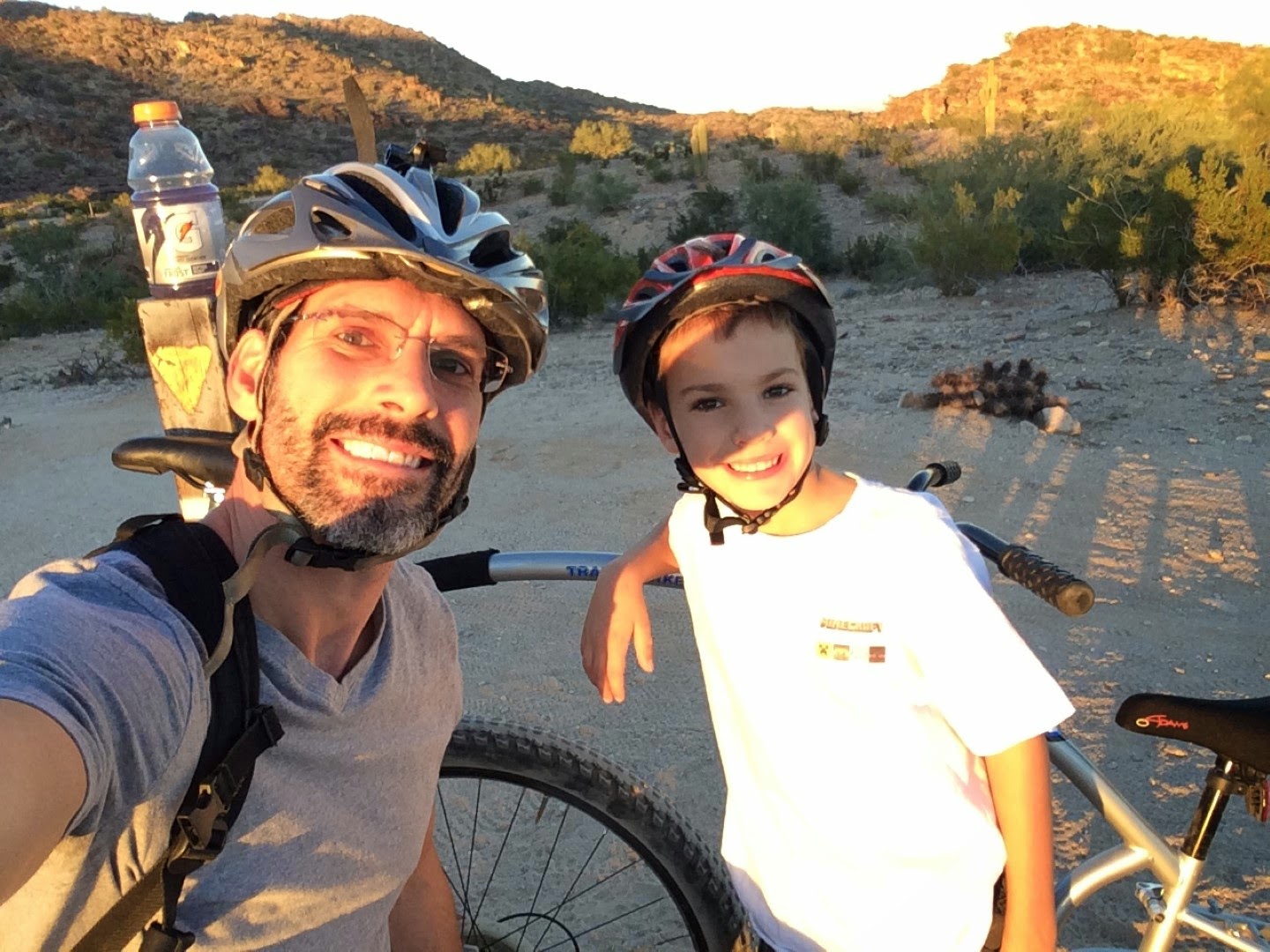 We rode further together this time than ever before.  There is a trail called the "secret" he's been wanting to ride for a long time with me.  His curiosity was the only thing leading him to want to ride the trail because he's never seen it.  We rode it and went down into a valley where there are no houses visible and no people around.  He discovered a small cliff and climbed up in the nook. 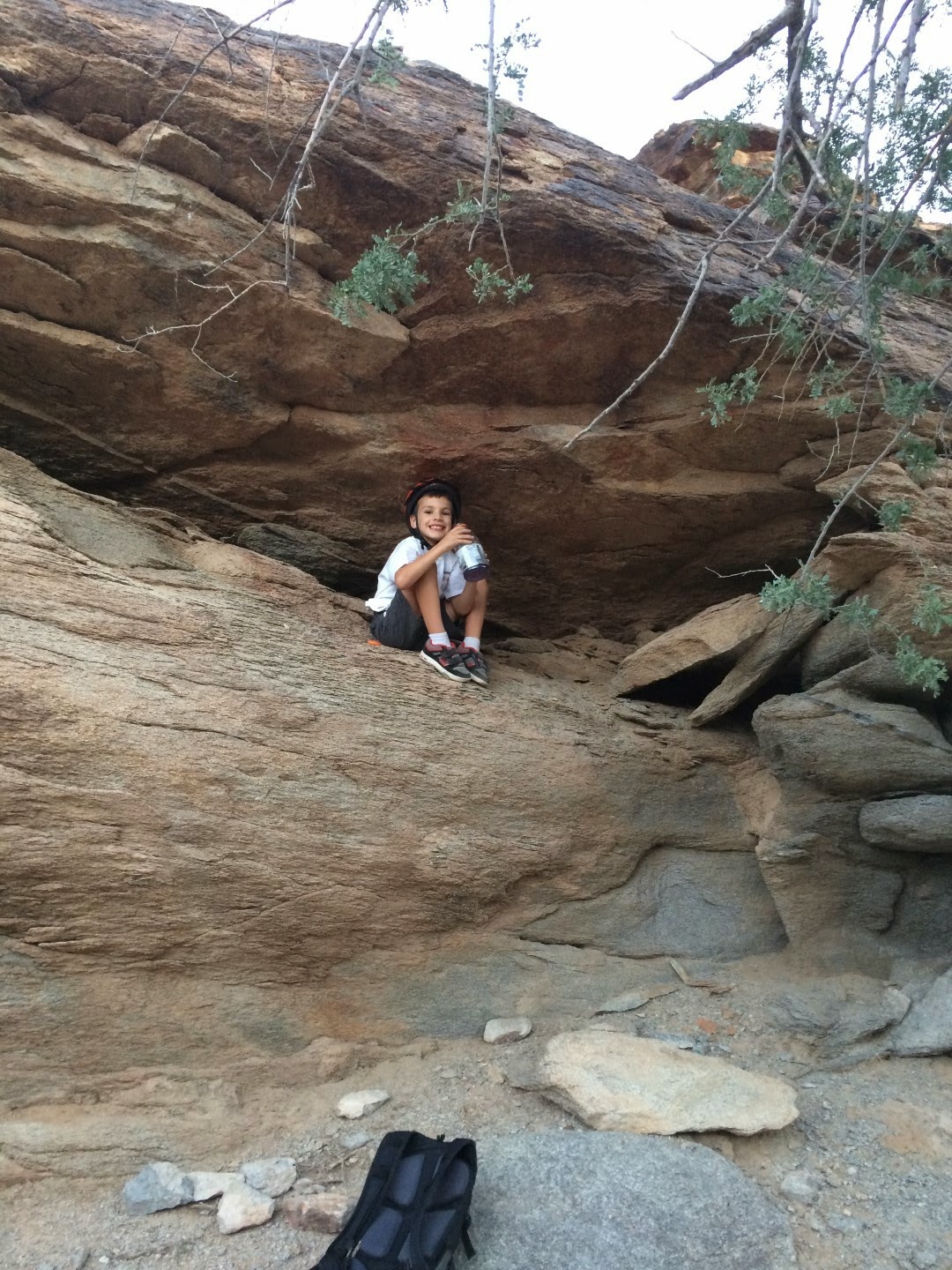 I have mixed feelings about him riding the trail-a-bike.  I agree he needs to learn to ride a bike on his own two wheels with no training wheels.  i get that, but i'm not pushing him to do it.  On the trail-a-bike we are able to ride some really adventurous trails that he otherwise wouldn't be able to ride.  We tackle hills together that a 10 year old probably couldn't do.  At the top of each hill we climb and each fast decent, Easton says, "We can do ANYTHING together, Dad."  and that's when I know the effort and plan is successful.  First he has to believe something is possible.  Then he can believe it is possible for him.  We had a great ride where we arrived back at the van right as the sunlight disappeared from the mountain side. 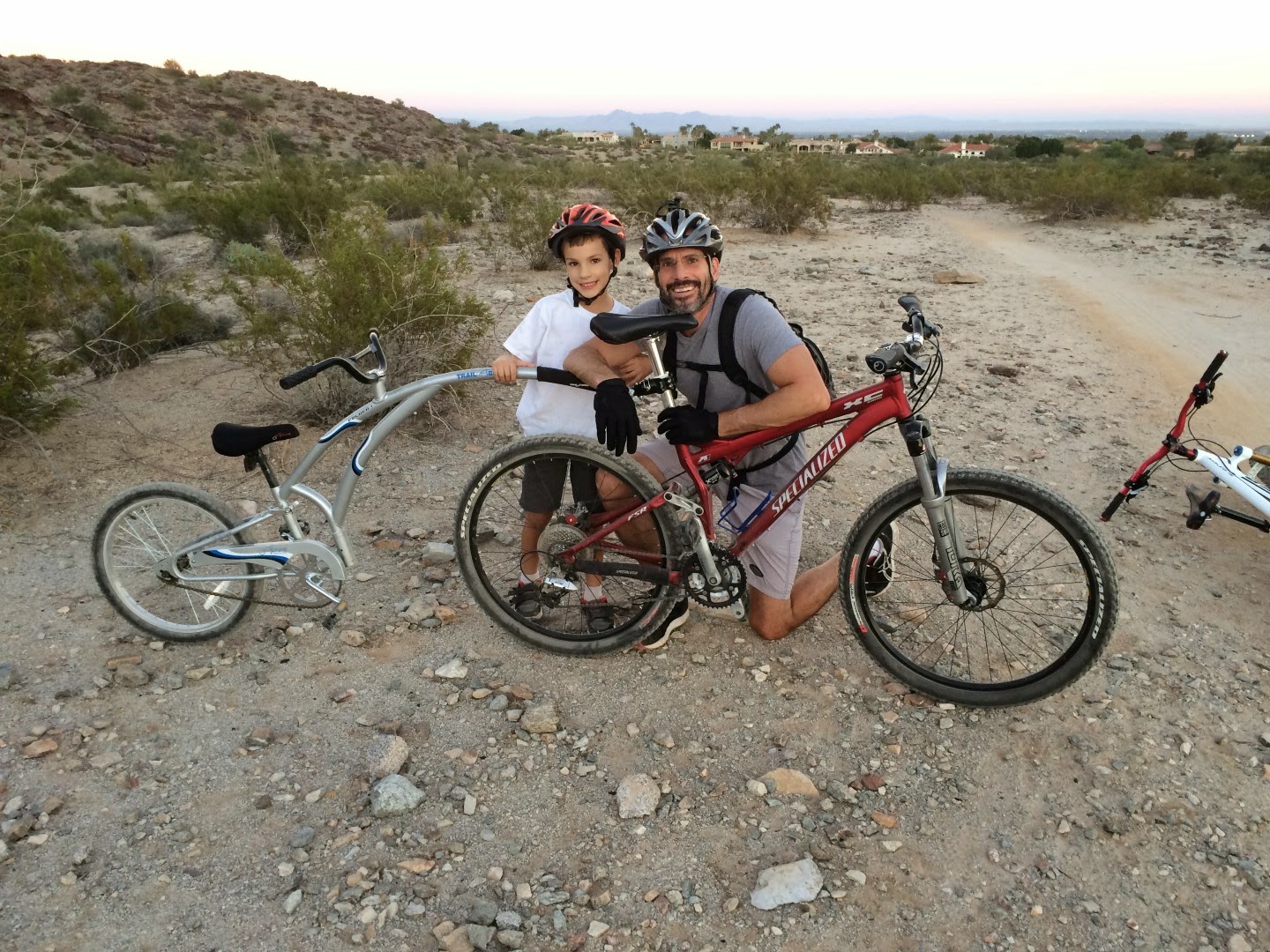 The rest of our time together was spent talking over sub sandwiches.  I asked him, "What can I do to be a better Daddy?"  He thought for a minute and said, "You're already perfect, Dad.  you don't need to change anything."  Although that could be received as an unhealthy prideful moment I responded by telling him I am not perfect and there are areas I'm improving with God's help.  I brought up a couple of situations where I could have responded better and he agreed I am not perfect.  But in the end he was very complimentary and I at least got the wheels turning in his mind.  He knows I value his needs and desires and I'm willing to adjust (within reason) to make sure he knows how much I love him.  That's more than most six-year-olds get from what I've seen.

As a side note, Easton is slowly progressing out of the "butt" stage.  I'm speaking words of life into the situation and calling things as though they are.  I'll be happy when every word and sound and motion isn't related to butts and potty talk.  Parents assure me this is just a stage, but I already can't wait for him to find something else to relate life to.

Kendra chose a terrible week to be sick...  just kidding.  i know she didn't choose it, but of all weeks of the year to be sick this is not the one!  Anyway, she is slowly feeling better and we are expecting her to get back to full health by this weekend.  Ouma is back with us for another few days to be a part of the Webb team as we prepare for our conference next weekend.  She and I took the twins to their soccer game this weekend so Kendra could rest.

After soccer the four of us went to the revolving sushi restaurant.  Ouma chose Teriyaki Chicken while the twins and I chose a bunch of raw fish and other sea creatures.  We ate raw squid, salmon, tuna, and octopus.  Yes, they both love octopus tentacles.  Here's Easton proving the suckers are delicious. 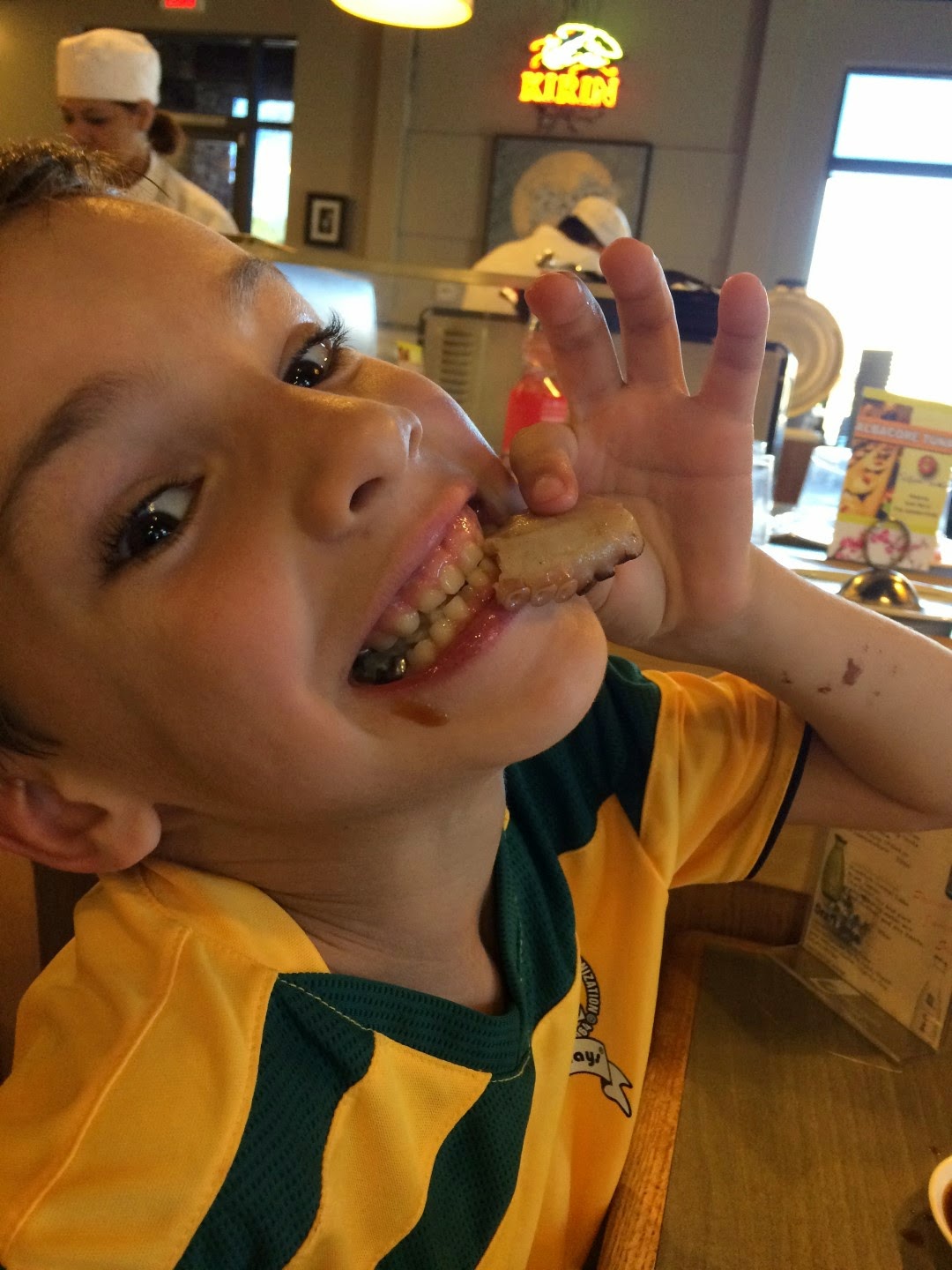 Ouma just shook her head and said, "What six-year-olds are adventurous enough to eat octopus and raw fish?"  Her grand kids are!  My blog didn't get it's name from parenting by passiveness and avoidance!