This daddy had two mountain bike rides in two days.  I haven't done that even once in 2014 until now.  i consider it an accomplishment because i'm focused on spending time with my family, working, and church activities.  Those three things take the majority of my time so riding is a once-in-a-while thing.  The hot summer is gone and the early darkness is here.  that means night riding is possible after the twins go to sleep.  I love overlooking the city as the sun sets. 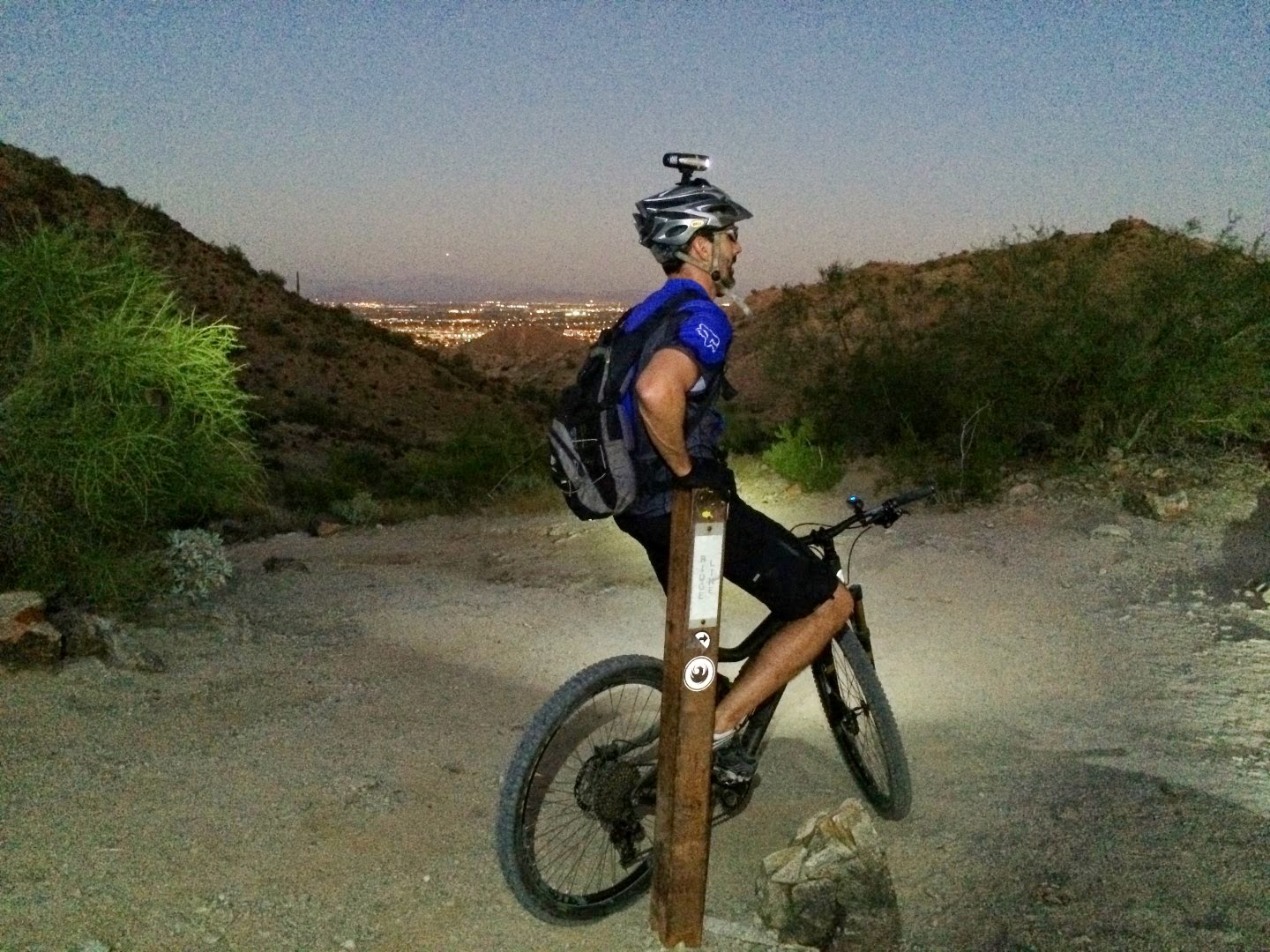 OK, enough about me, I know everyone comes here for the twins.  Taking Layla clothes shopping is a huge weakness for me.  I admit it.  I love to shop for her!  nail polish, dresses, shoes, jewelry, doesn't really matter what because the two of us can find something she adores in almost any store.  I took Easton to the kid's 2nd hand store to look for flip flops.  His broke and I wanted to find some that don't fall off his feet when he walks.  They had no flip flops in his size, but they had tons of dresses! Layla tried this one on.  She promised to dance with me at home in it so I bought it.  that's a no-brainer. 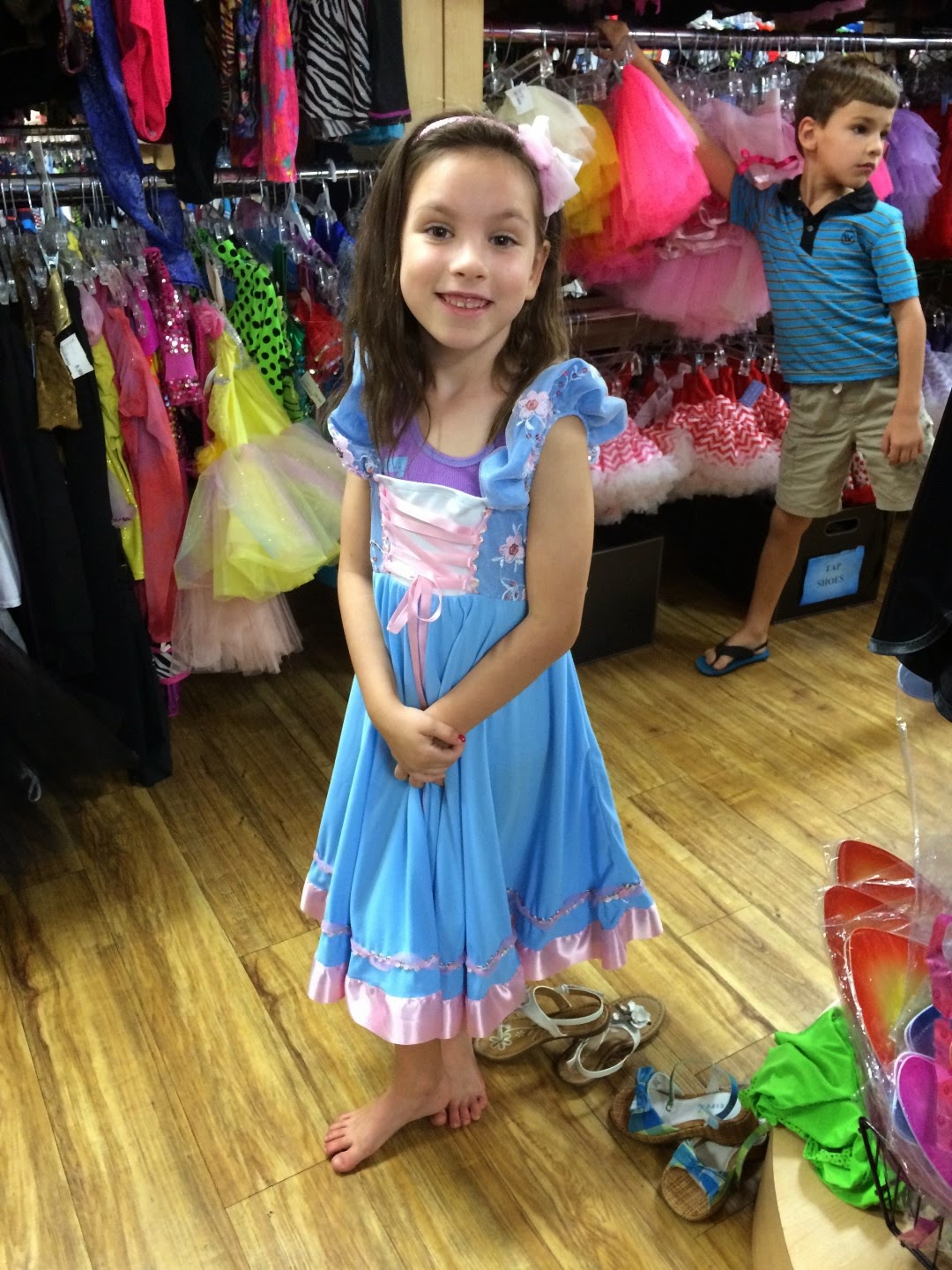 Layla's ice skating lessons are finished and the next class starts this week.  She's been practicing with the goal of completing her current level and moving up to the next one where her friends are.  She did it!  her instructor is not normally dressed like Mario, but this was a special costume-friendly class for Halloween. 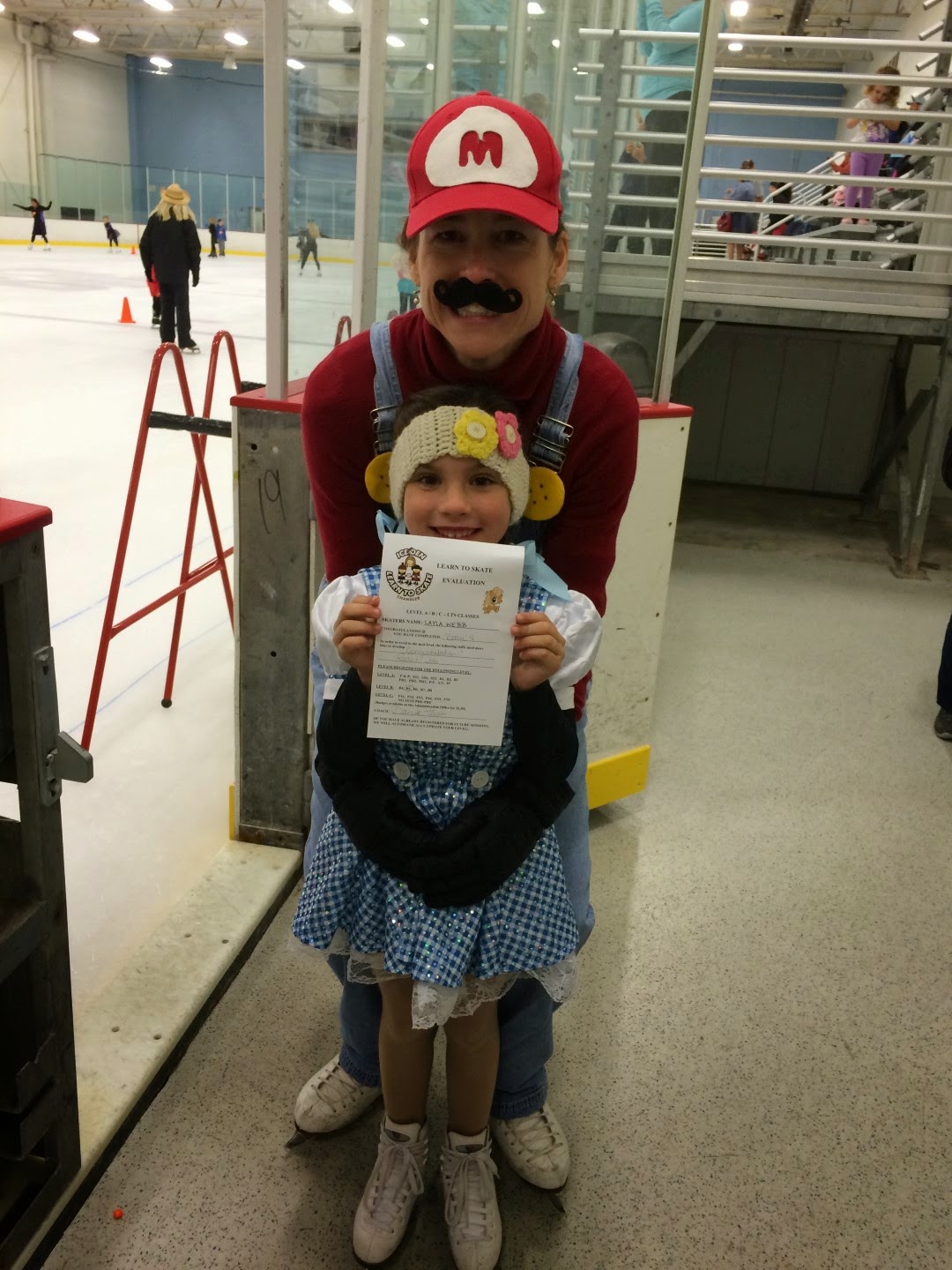 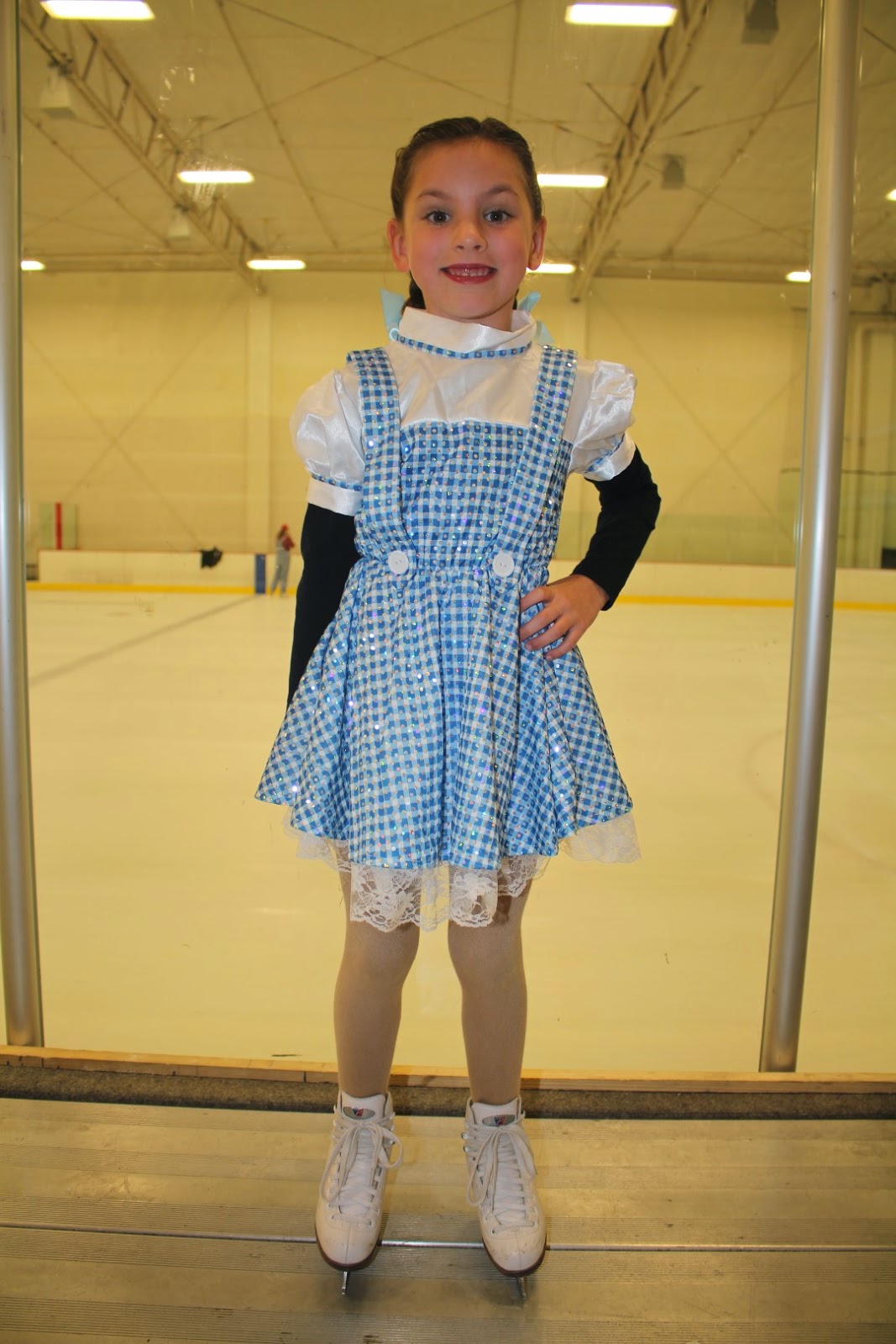 and another girl in her class had the same costume!  Who would have thought the Wizard of Oz would be so popular this many years later. 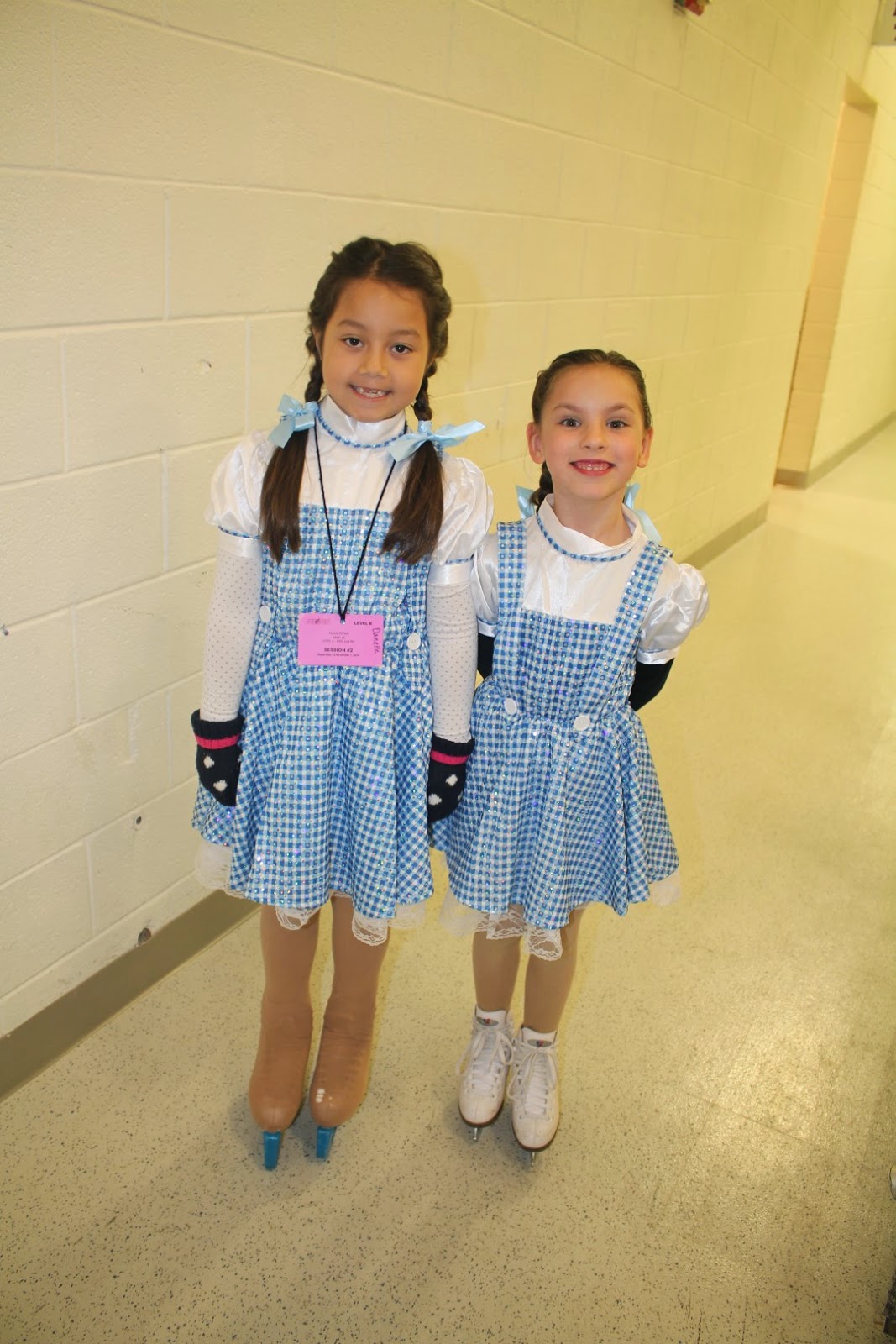 Layla is not the most flexible skater on the ice, but she is one of the strongest and toughest.  Her form is still a work in progress on the basic moves, but she has core strength and persistence galore. 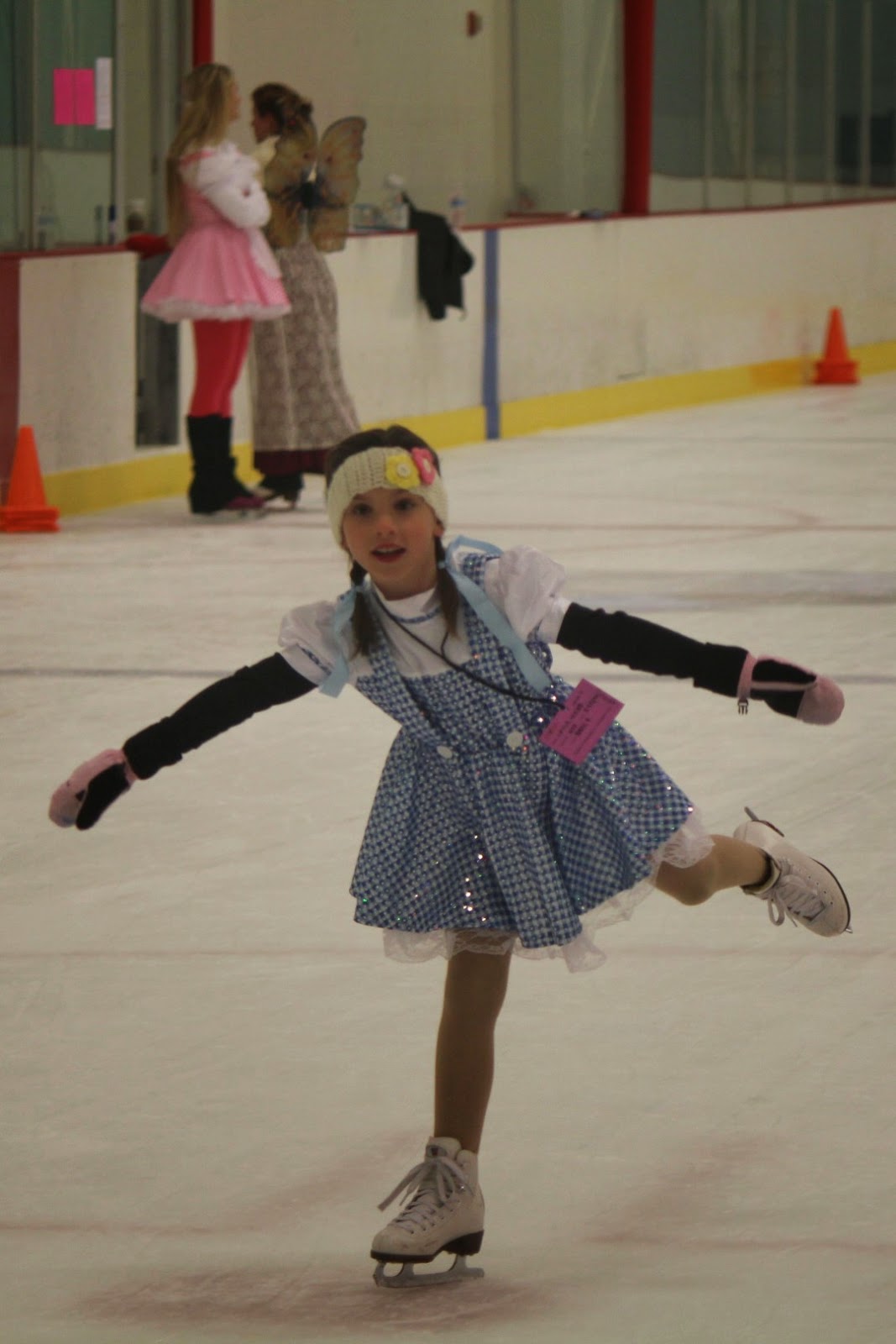 Her balance has come a long way since she started.  I would call her the most improved student of all the classes. 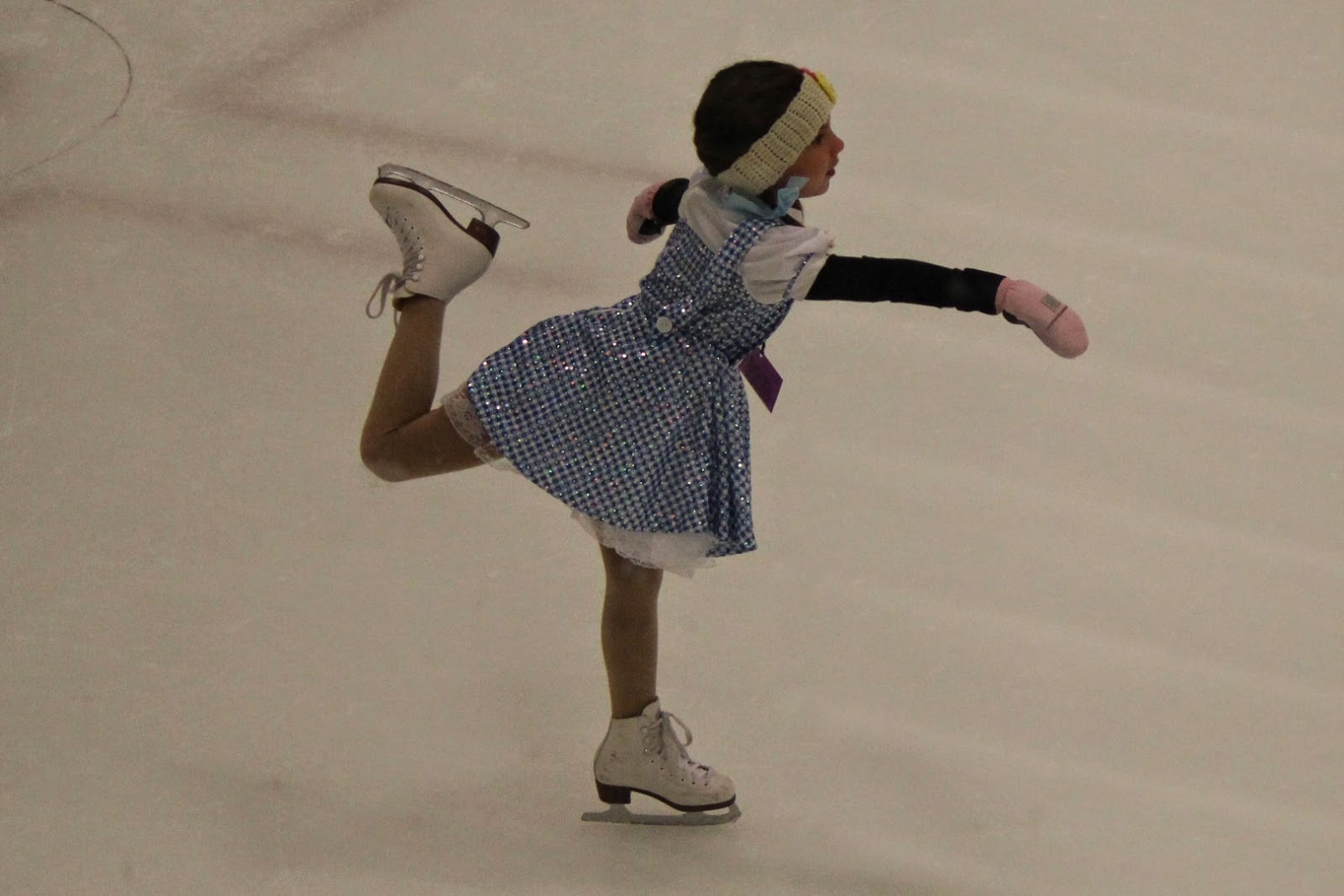 Halloween was the best one yet with the twins.  Layla chose Dorothy and Easton chose the SWAT team.  Easton overlooked every superhero and occupation.  I have no idea why he chose SWAT or what he was really looking for, but in these situations Kendra and I are accommodating.  I could have coerced him into liking something, but why?  If he chose a grim reaper or vampire we would have quickly said "no", but he didn't.  The only categorization I can put Easton into is "reality".  He is 100x more interested in reality than fantasy.  Maybe I should have found a Titanic Captain Smith costume.  Hmmm.. maybe next year.

We carved pumpkins the day before Halloween.  If you carve too early in Arizona, the dry climate turns the Jack-o-lantern into a geriatric, toothless, shriveled up pile of mush.  Easton's owl was mostly designed by Kendra, but Easton was happy about the results.  Layla drew hers without any help and I cut it out with her.  These were our only Halloween decorations because it's just not a big deal around our house other than an opportunity to dress up and go out in public.  Oh wait... we already do that regularly.   So i guess it's about the social interactions and candy. 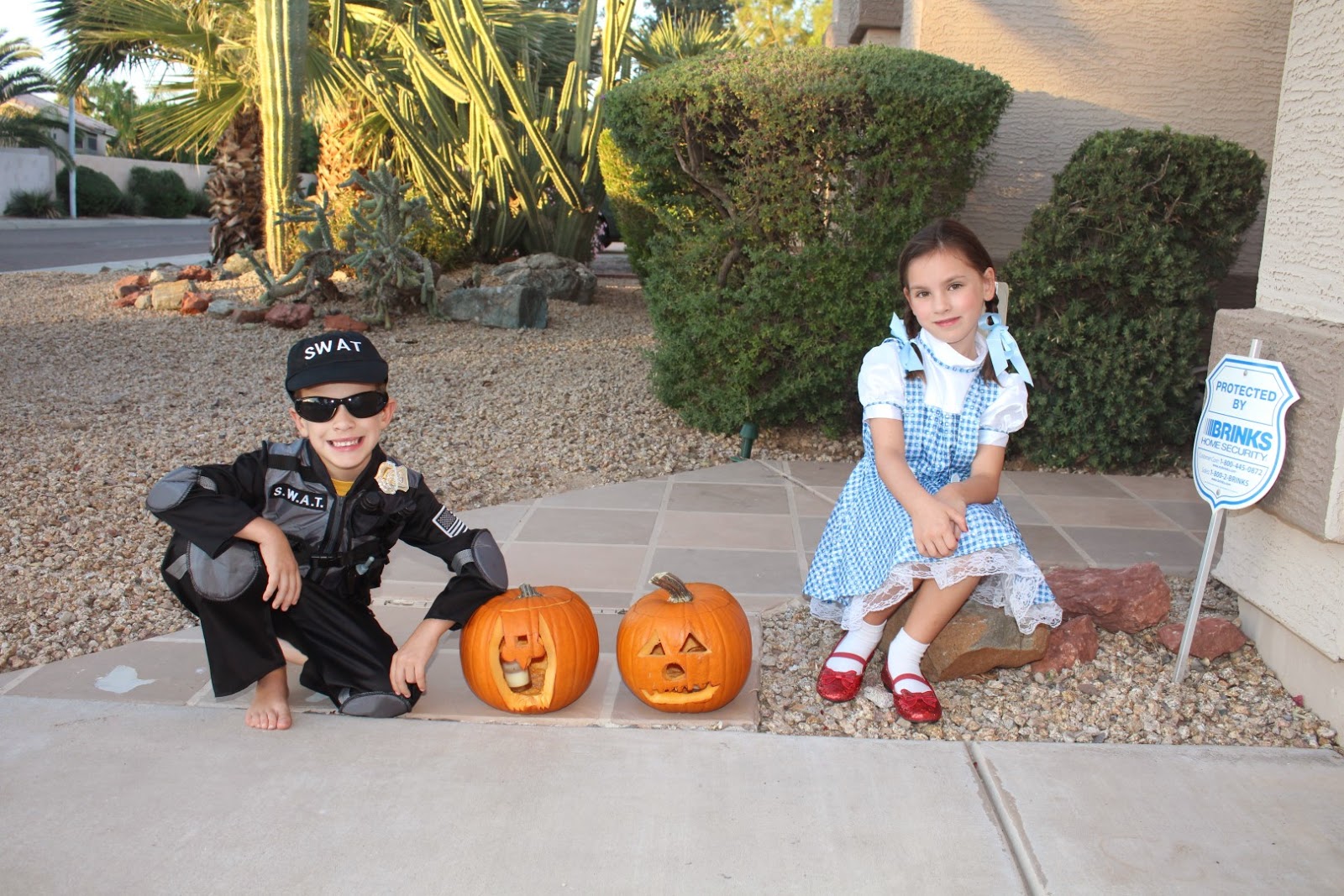 After the sun went down we lit these babies up and showed our jack-o-lantern skills for the neighborhood. 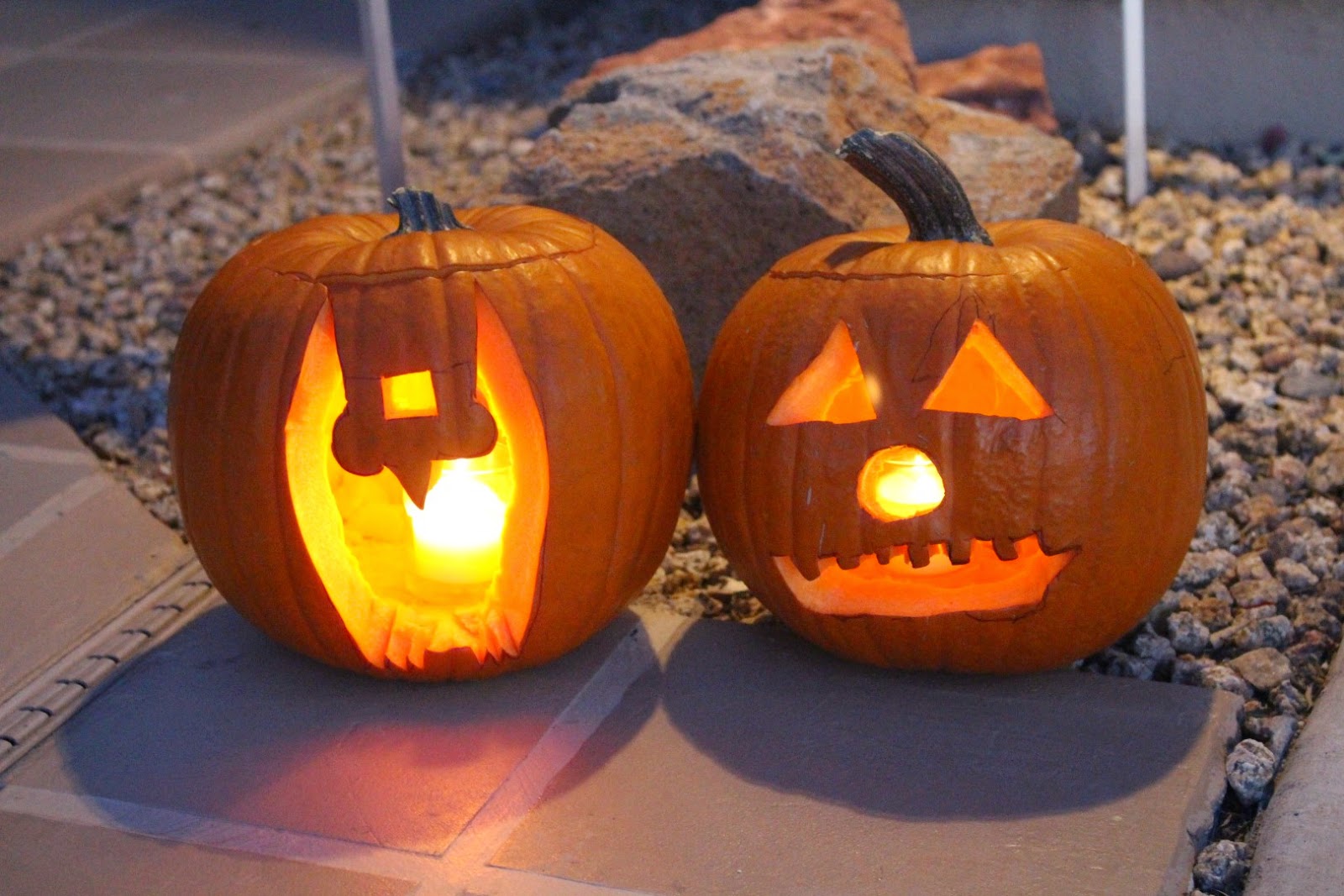 Logan and Bree joined us this year.  She is Pikachu and he is...  I forget what his costume is.  Video game developer guy, i think.  Kendra stayed at the house to hand out candy while the rest of us mobbed the neighborhood. 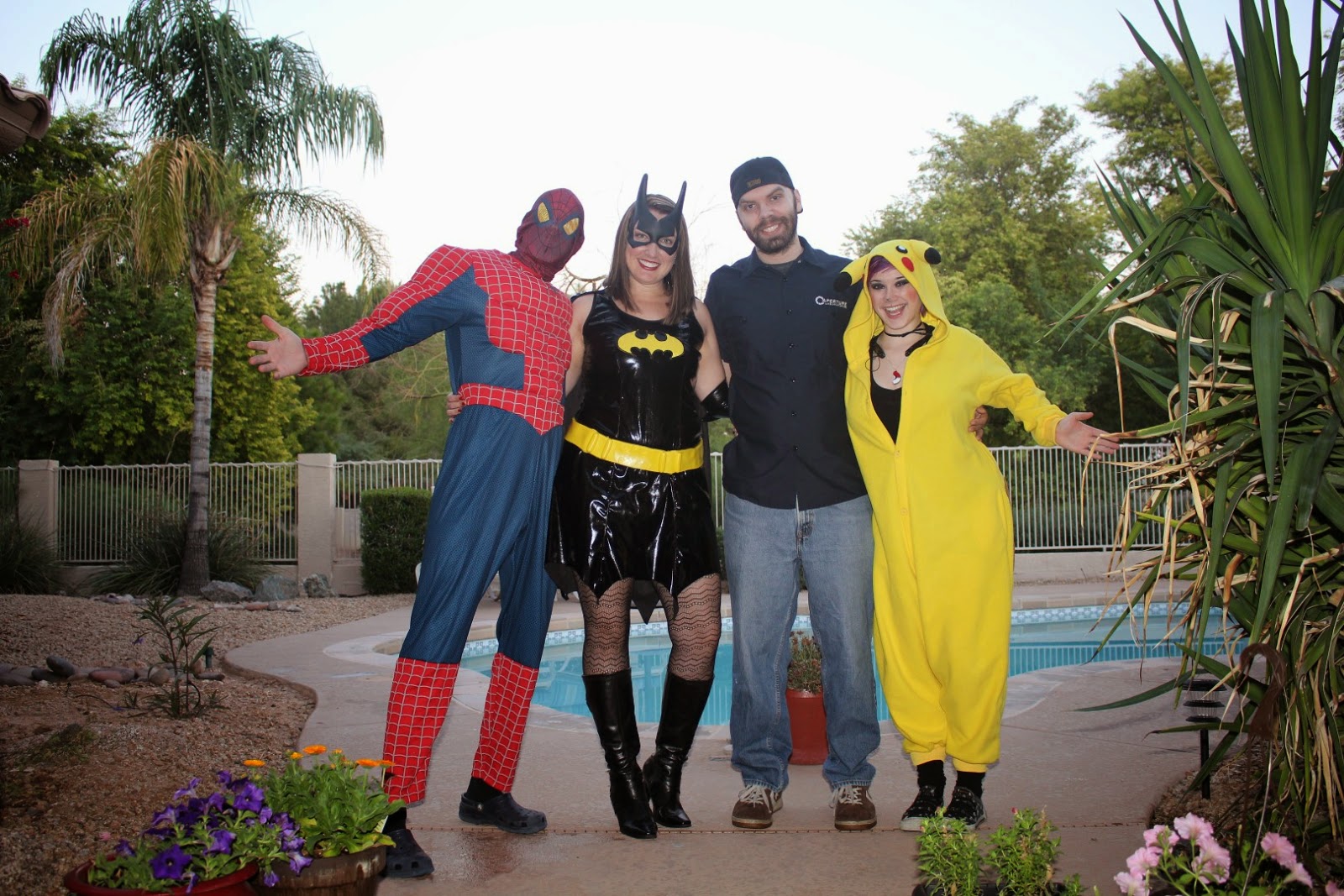 These two characters have great imaginations.  I hope they never lose theirs. 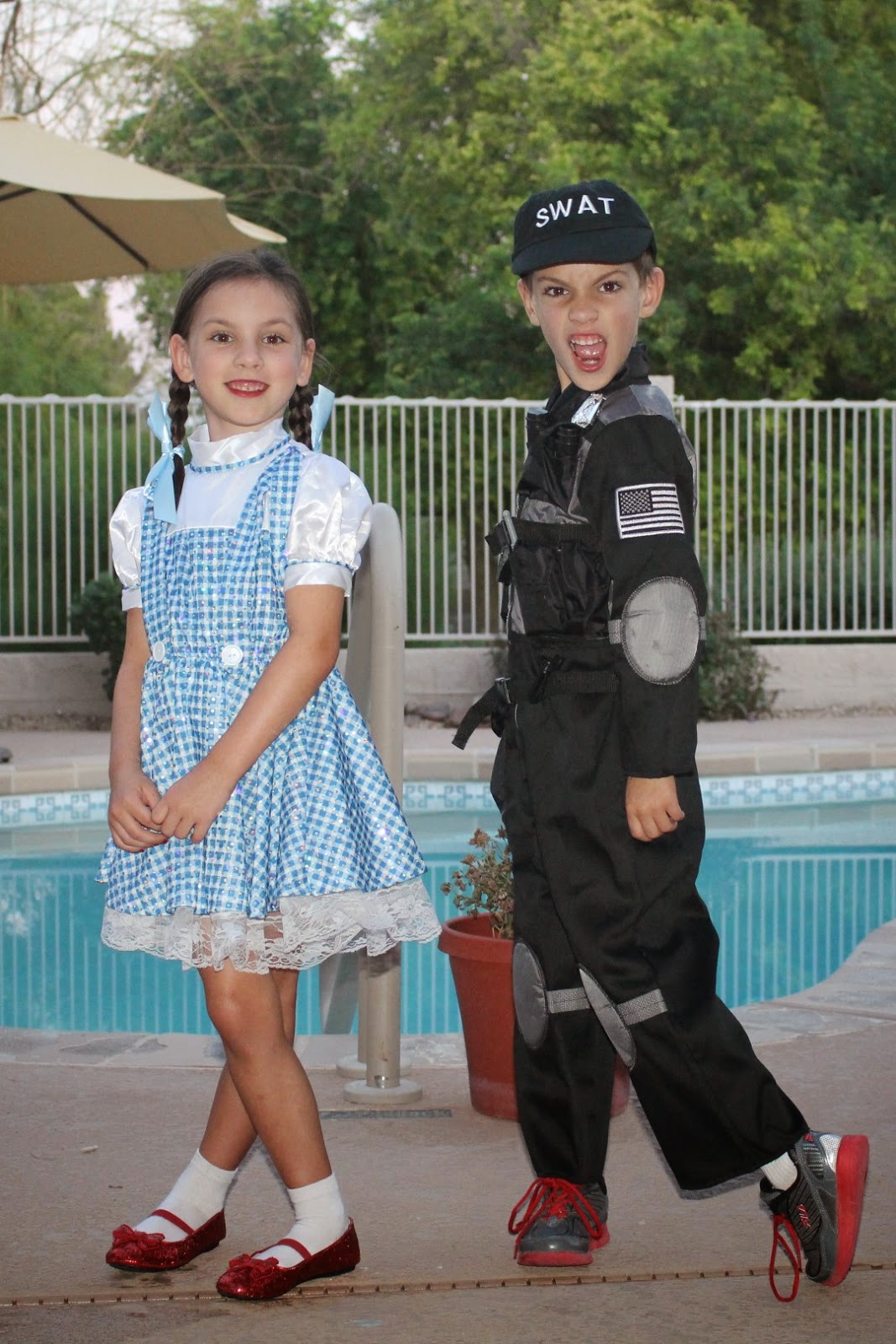 This is our official Halloween 2014 Webb family picture.  kendra's new batgirl costume is pretty awesome.  I may have worn out my welcome with the Spiderman outfit.  How can it get any better than a guy named Webb wearing a spider costume?  hard to top that... 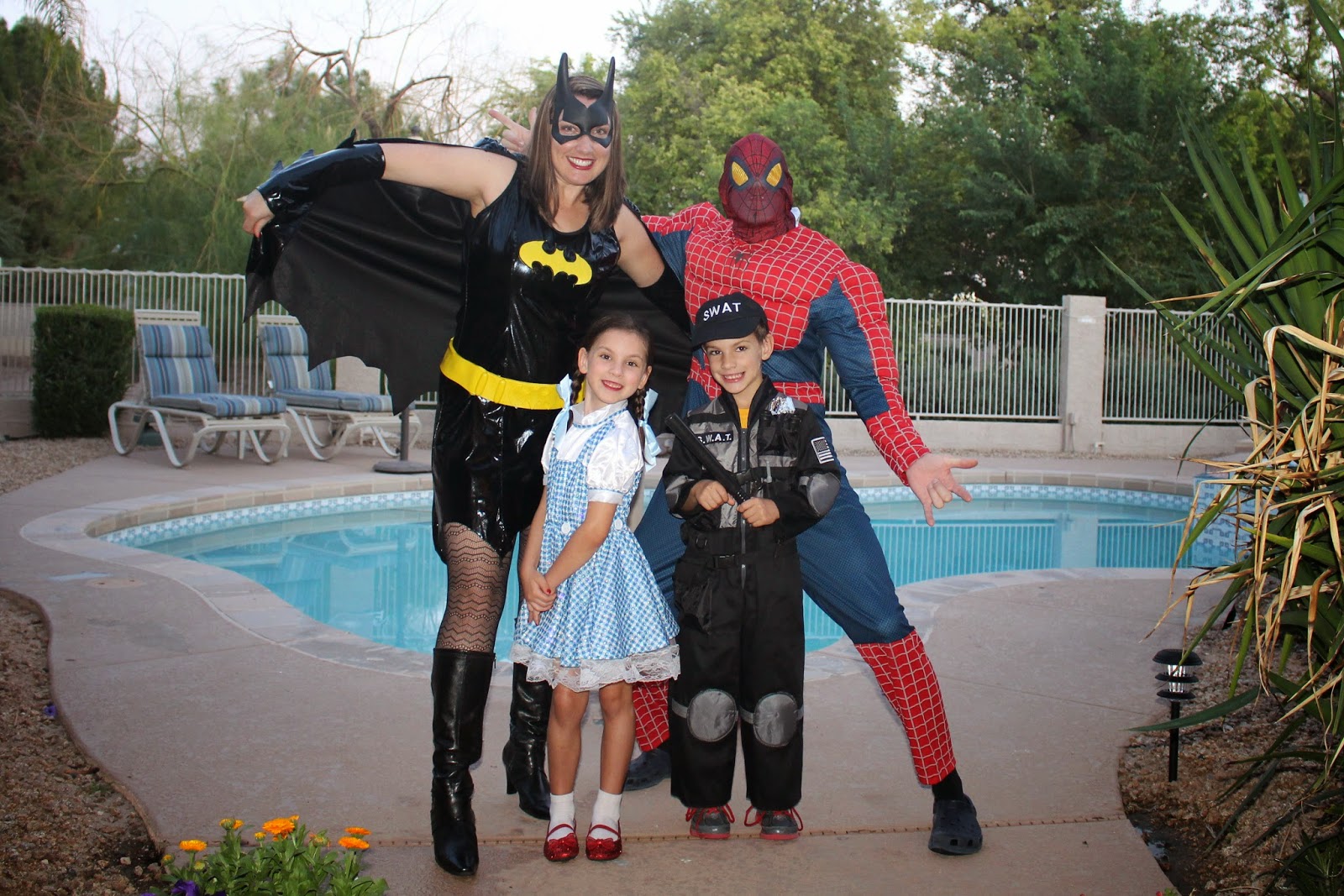 Our French neighbors decided to walk with us just for fun.  Their boy is Captain America, which I thought was humorous considering their French patriotism.  Kendra likes the vampire boy just a little too much.  Gotta admit the french accent is pretty exotic though.  and their little girl was about 20 steps behind the pack all night. 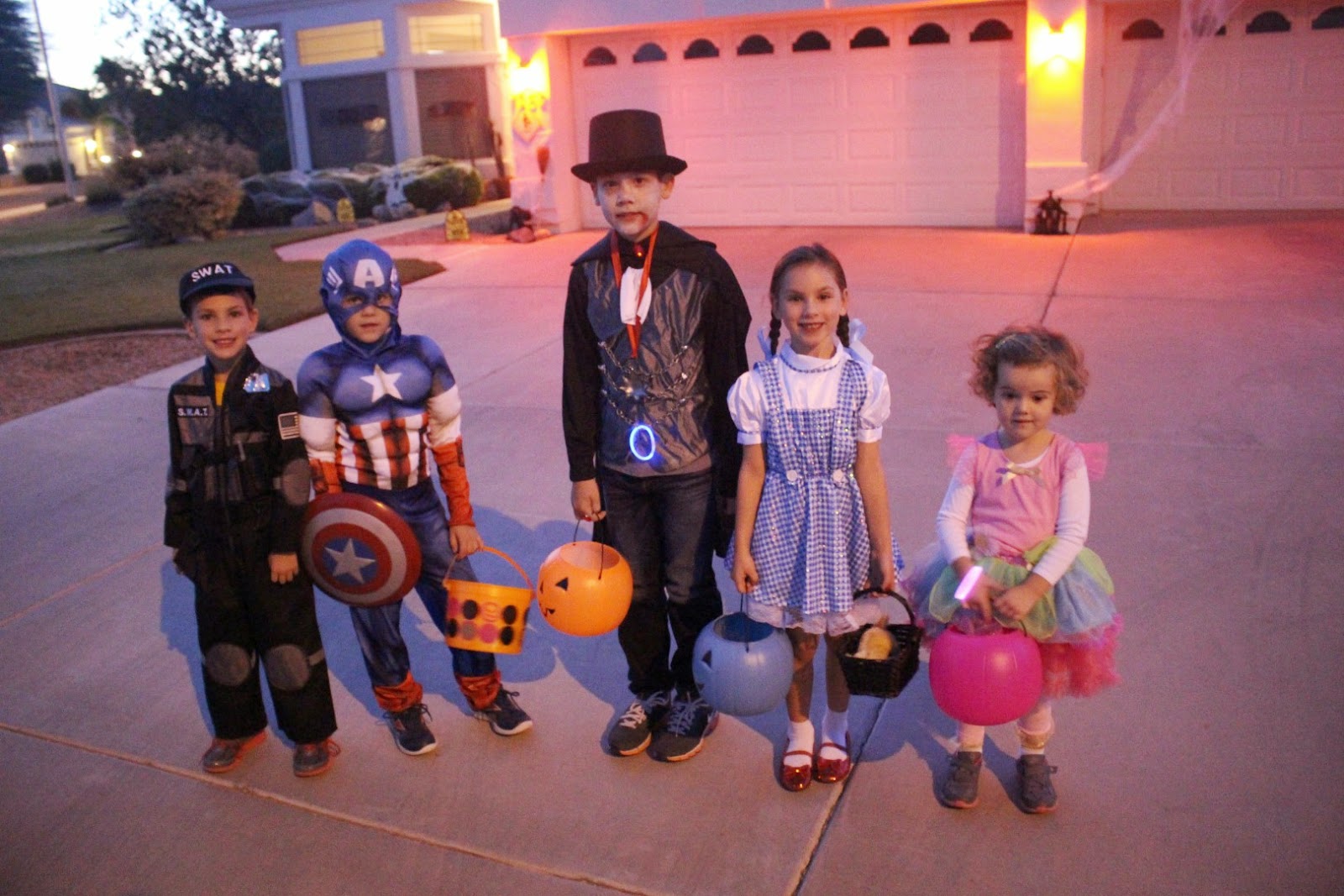 The kids literally ran from house to house.  What started as a single pack of adults and kids dwindled down to just us two dads jogging to keep up with the kids.  first year they got full candy baskets!  Too bad they won't ever get the chance to eat all that junk. 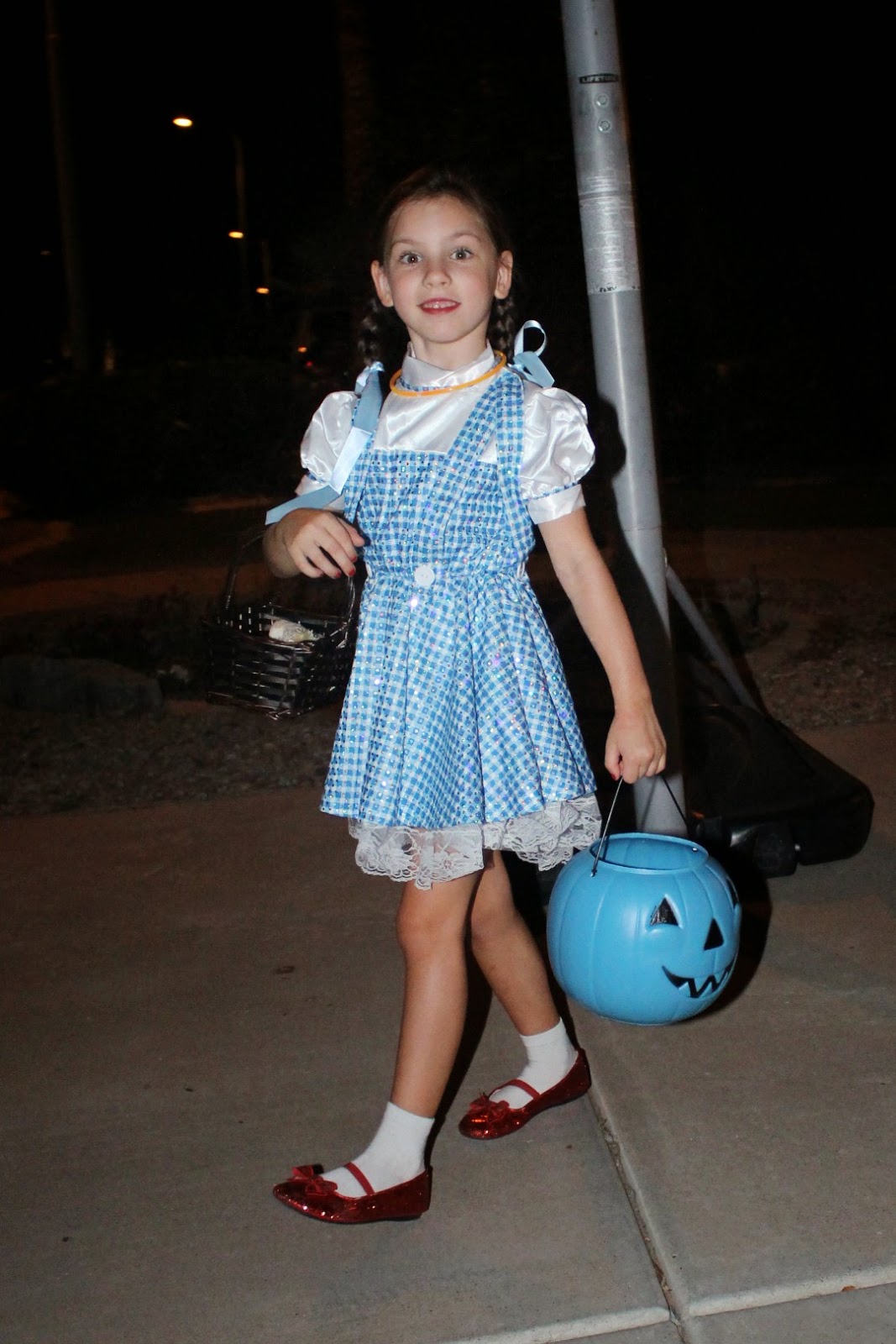 Layla found the Hello Kitty Halloween blow-up doll to be the coolest decoration in the neighborhood.  She asked to have one in her bedroom as a nightlight.  I paused to consider it, briefly. Gotta hand it to her for being innovative. 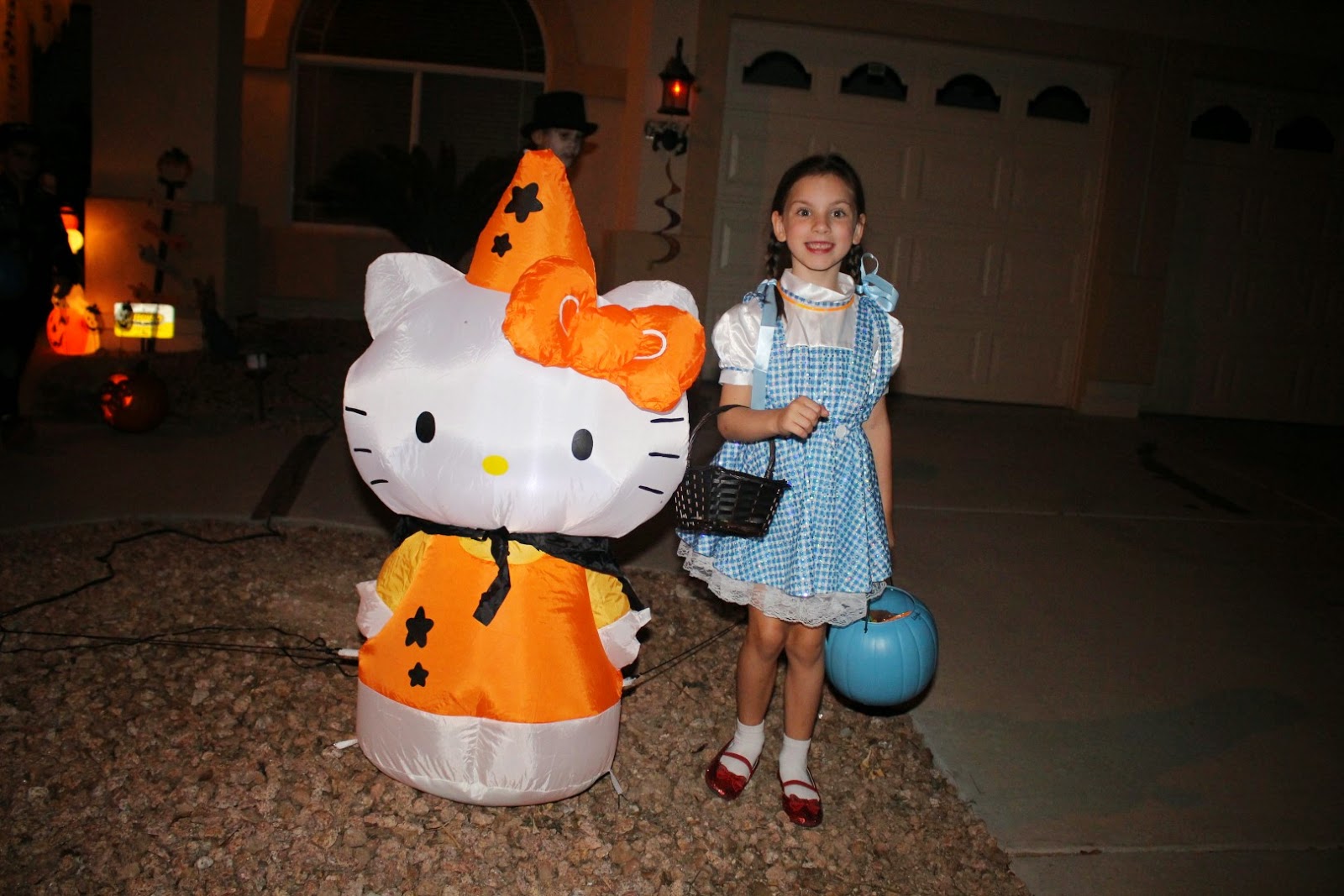 Easton posed with the Mickey vampire and our vampire neighbor just because I asked him to.  The smile is genuine because he was already looking over a the next house we were going to trick-or-treat.  That boy has a one-track mind and when he's focused, he's effective.  wonder where he gets that from? 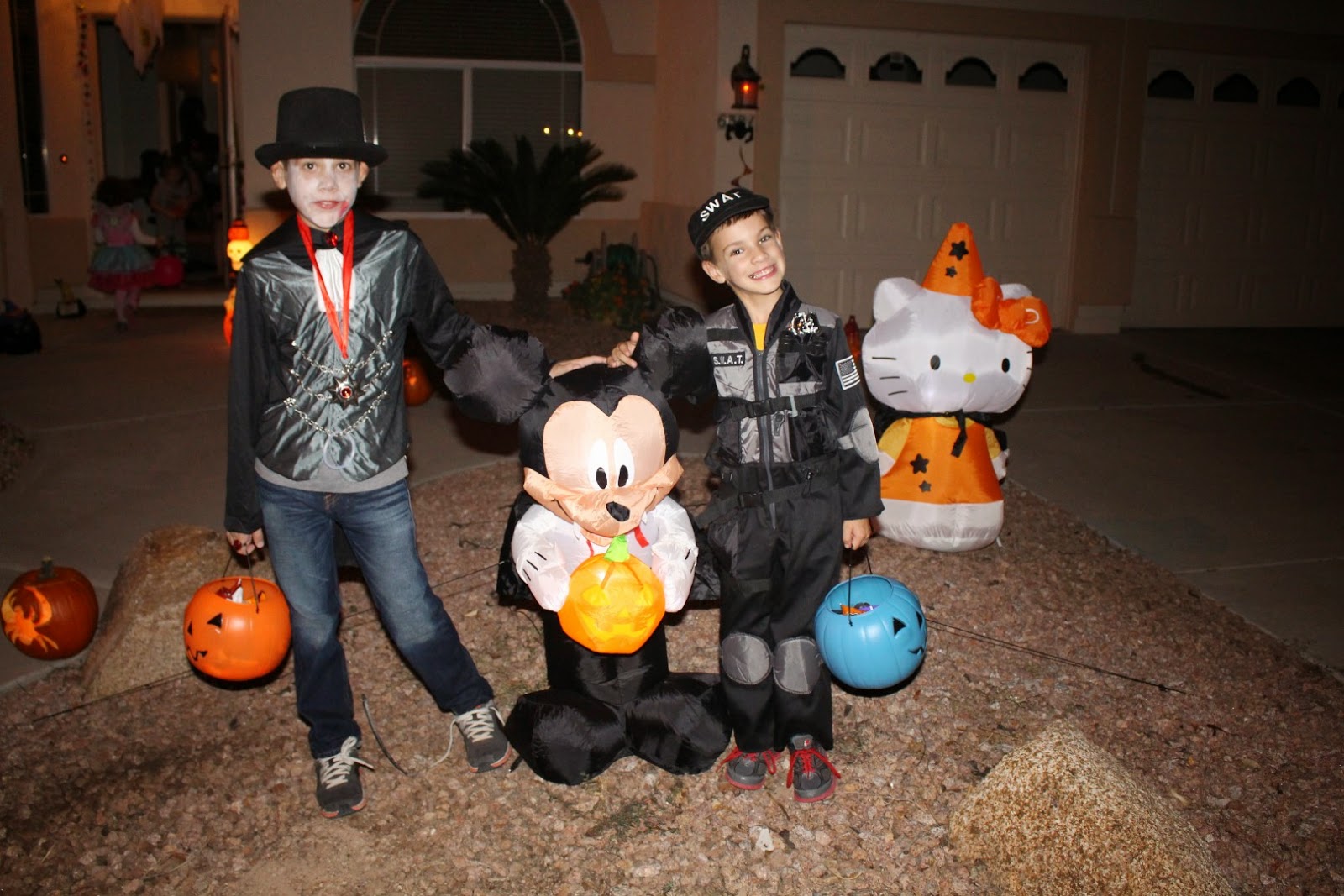 These next two weeks will be a blur.  Kendra and I are coordinating, speaking, and leading a two-day conference for church.  preparing our 10 leaders for the event is like attempting to hold 10 corks under water at the same time.  The frequency of posts will depend entirely on Ouma's picture taking prowess.  4 days until she arrives!