Even 785 miles of distance between the 4 Webbs and home can't keep us from being drawn in by the birthday party black holes.  "Did you say swimming, pizza, cupcakes and kids?  Why, yes, we would love to be there for the party."  It's tough to turn down such an offer even with back-to-back days of the same format of a party.  We spent Friday evening at Aunt Joan's house with Ezra for his birthday, then Saturday lunch was with Isa and all the Mommy friends for her birthday.  Here's Ezra doing whatever he wants because it was his birthday. 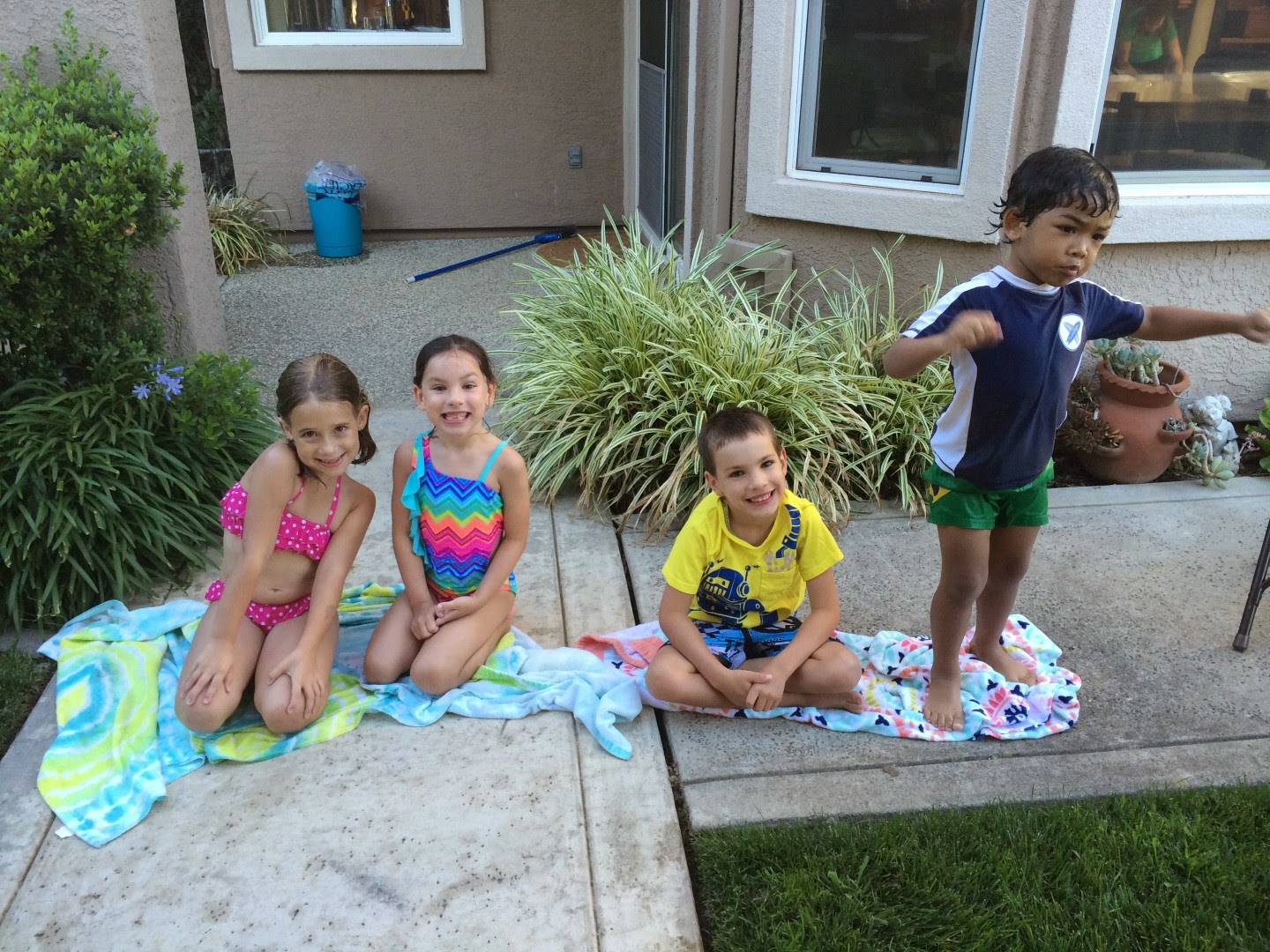 There were only a few kids, which was nice because it was not so chaotic and the twins had two chances to smash the pinata. A few parents directed comments towards Kendra and I about how we need to get Easton and Layla both into baseball.  Their stance, swing, and aggression were notable. 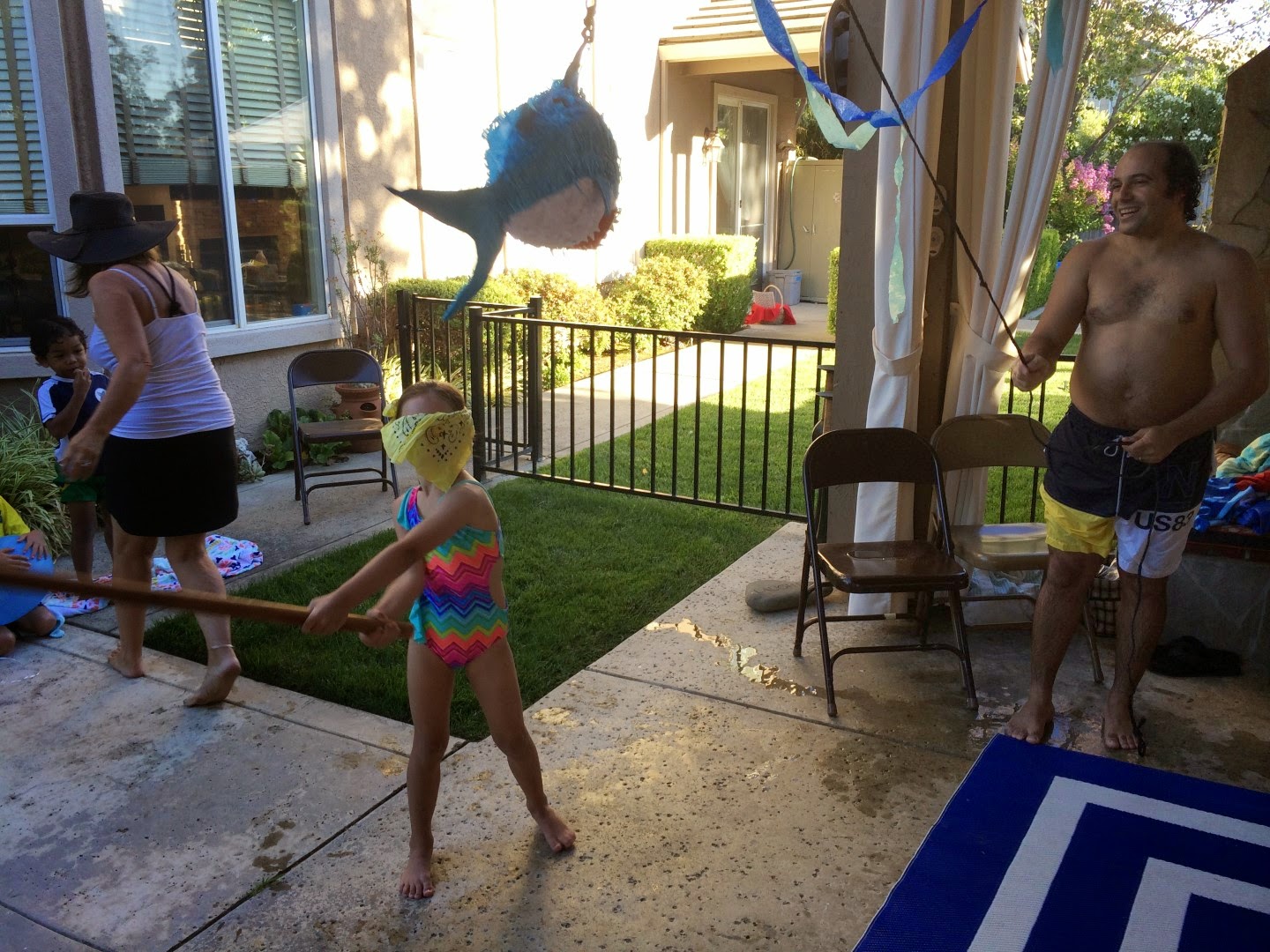 I missed Isa's party because I was getting the wart on my thumb blasted with liquid Nitrogen.  I've been to my dermatologist for the same treatment 8 times in the past 14 months with zero success of freezing that sucker off.  So I got a second opinion from a local dermatologist who basically did the same thing with more intensity, longer.  We'll see if the darn thing disappears finally or if my whole thumb falls off this time.

I had a couple of hours of Daddy time with the twins so that Kendra could hang out with Aunt Patty and GG for adult conversation.  Each day this week Easton has asked, "when will not have to go to work so you can play with us?"  They have a good understanding of the calendar and days, but it's still tough for them to understand how I work for five days then have two days off to play.

Anyway, I took them out for an afternoon river adventure.  We've been driving over Rainbow bridge since the twins were born.  We look down below and comment on the people playing in the river along the banks.  I decided it was finally time to stop spectating and start participating.  They strapped on their life jackets and we headed out for the river bank.  It took a van drive, a hike across the bridge, and maneuvering down the narrow, dusty path to the water's edge.  We scampered across the boulders to find a large rock where we could park our stuff. 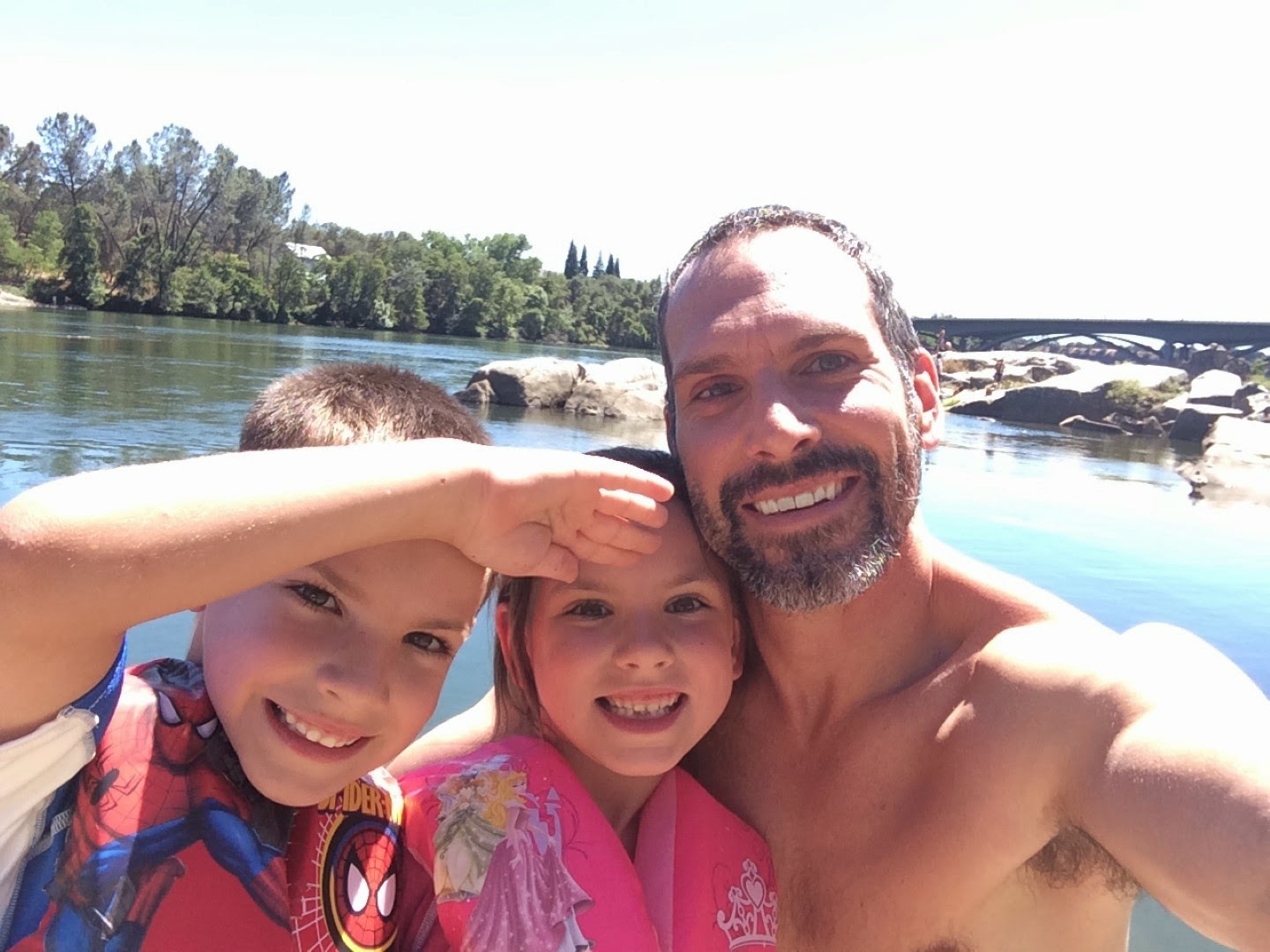 I knew snack time would pop up while we were at the river.  I packed copious amounts of fruit, nuts, and grains along with some semi-healthy cheetoes.  We started eating and noticed a goose swimming towards us.  Easton and Layla flicked a few morsels of chips his way.  He was not shy at all.  he climbed right up next to us. 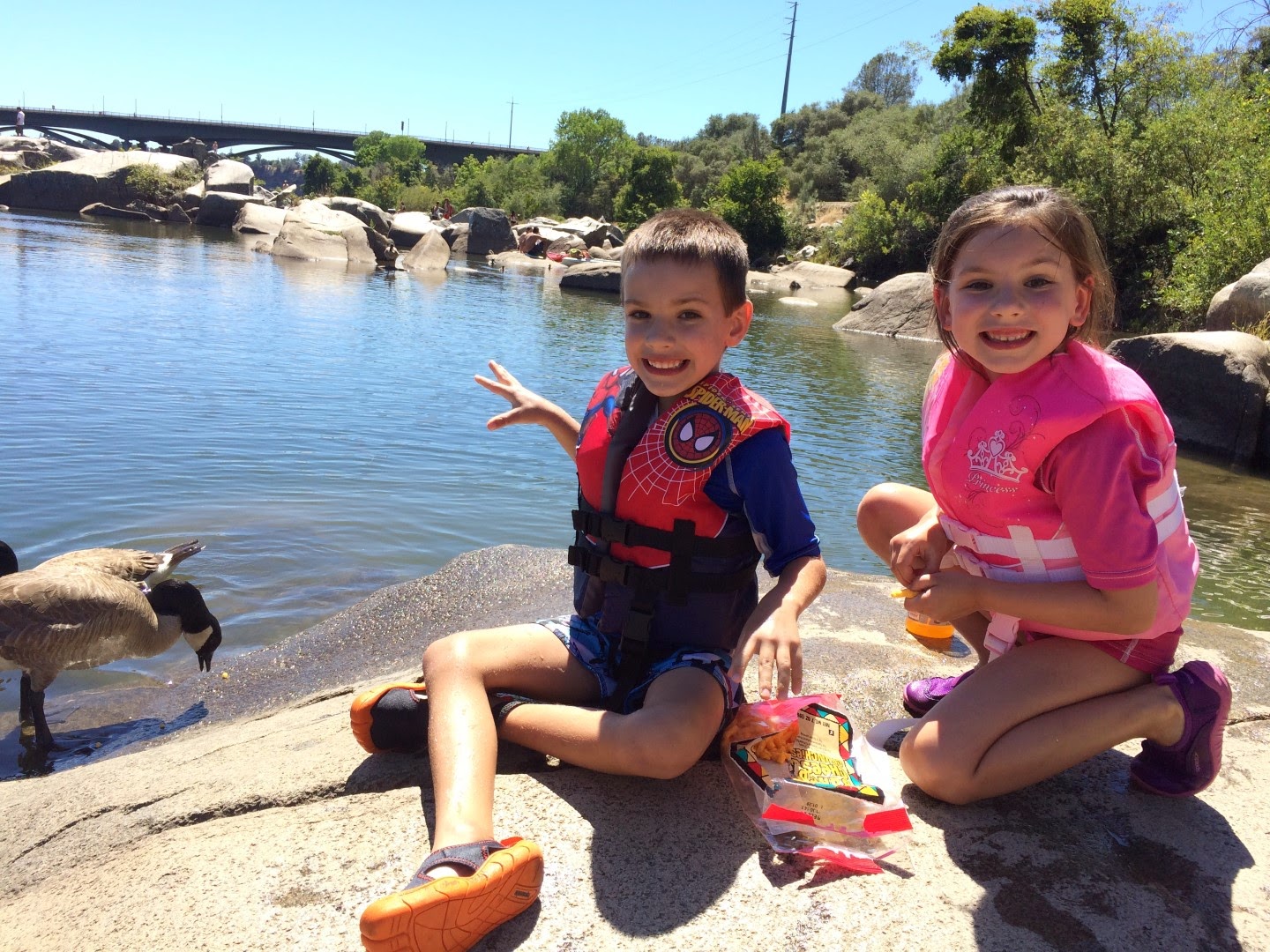 Then we noticed a gaggle of geese and some purple headed ducks migrating toward us.  It is tough to see how close they were to us in the pictures, but just to give some perspective, Easton was able to pet one without it even caring! 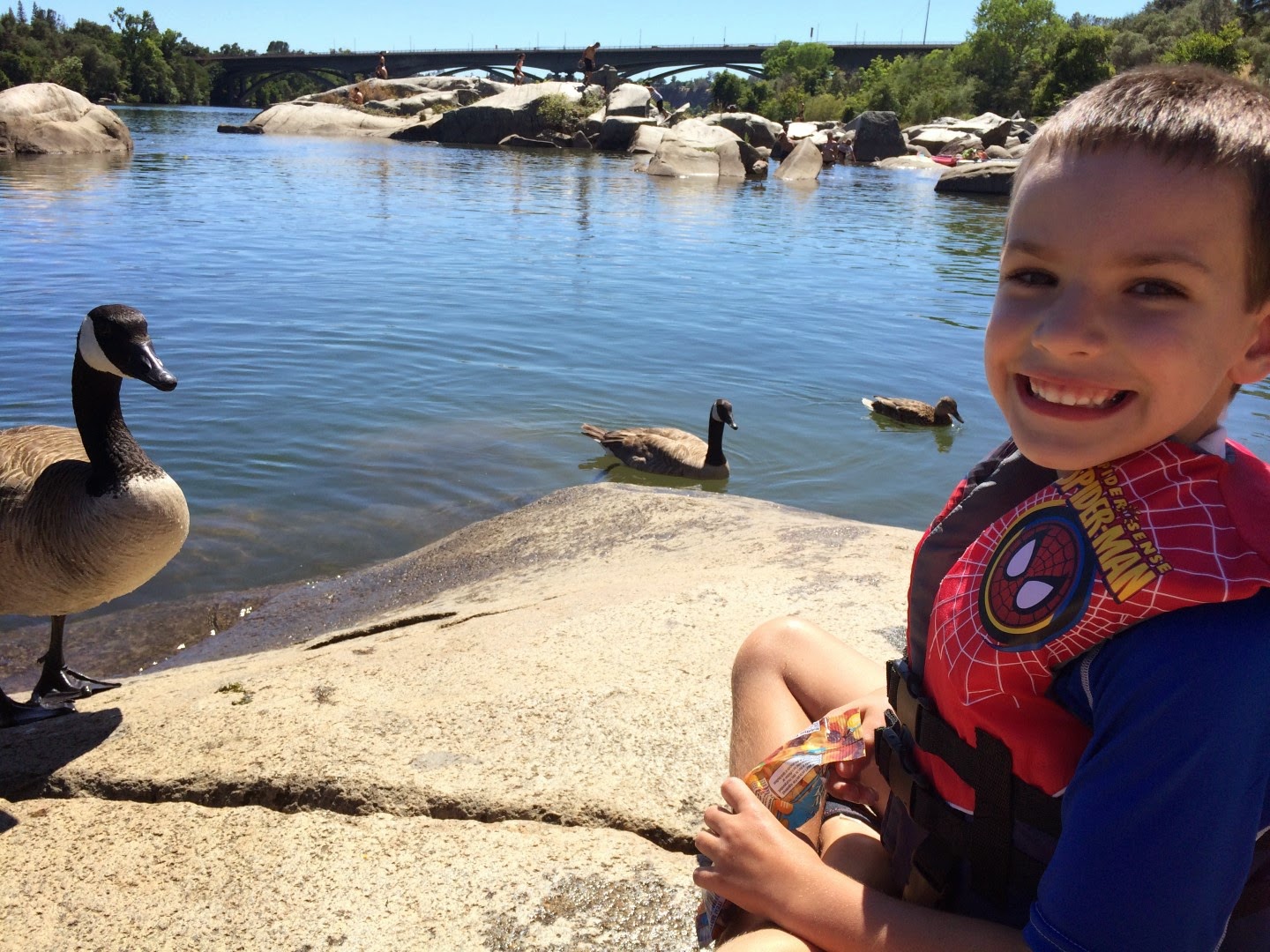 Easton and Layla each had a goose eat from their hand.  Both of them had their fingers bit in the process, but the geese weren't being mean they were just trying to snap up the food.  Luckily, neither of them freaked out when it happened. I even had one take a chip hanging out of my mouth!  these were by far the friendliest geese I've ever seen.

The water was really cold.  Even though the air temperature was hot I spent 20 minutes convincing the twins to get in with me.  Once they were in we swam over to the rocks in the picture above.  We climbed out to the edge where the other 'big kids' were jumping off.  Layla wasn't interested in doing it, but Easton was.  He was super courageous and I was a proud dad.  He and I jumped off together and swam gave a primal scream of epic proportions.  Partially as an acknowledgement of our accomplishment and partially because the water was extra chilly.  I consider this to be our favorite memory maker of the week.  I know they will remember this outing for many years.  We had a great time together and it didn't cost a dime.

Just for kicks I'm adding a link to an article I find interesting.

It draws a link between parenting methodology and ADHD.  I don't know that I completely believe the findings of the article, but it could provide some explanation.  It could be nature or nurture or a combination of both.  We don't have empirical evidence showing root cause of ADHD and that is what bothers me most.  It's not wrong to discuss a few theories, but to put the blame on the parents is a bit harsh.  Still thought provoking though.

However, in this awesome clip about Changing Education Paradigms it shows how ADHD is not spread evenly across the US.  This tells me it is not a country-wide issue.

Hearing that roughly 10% of all kids are diagnosed with ADHD is a real shocker.  This has absolutely nothing to do with Easton and Layla, but it is one of the things I was concerned about before they were born.  I'm very relieved to know neither of them are affected by it, but I can tell you about a few kids in their classes who I know are!