Happy Father's Day to all the dads who happen to stop by.  This is my sixth time to go through this celebration of fatherhood.  I received exactly what I expected and hoped for on my special day.  The twins told me several times over the past few days about their handmade greeting cards.  At six years old there isn't a single thing they can buy for me that isn't mine already.  The only money they get is what I have already earned.  What they can give me is their creativity, time, and love.  Lucky for me they have an abundance of all three.

As soon as I woke up they were  waiting patiently to give me their cards.  Layla's has colorful flowers on one side with her and I smiling on the other.  Easton drew a shark mouth.  That's his version of a shark attack coming straight at you. 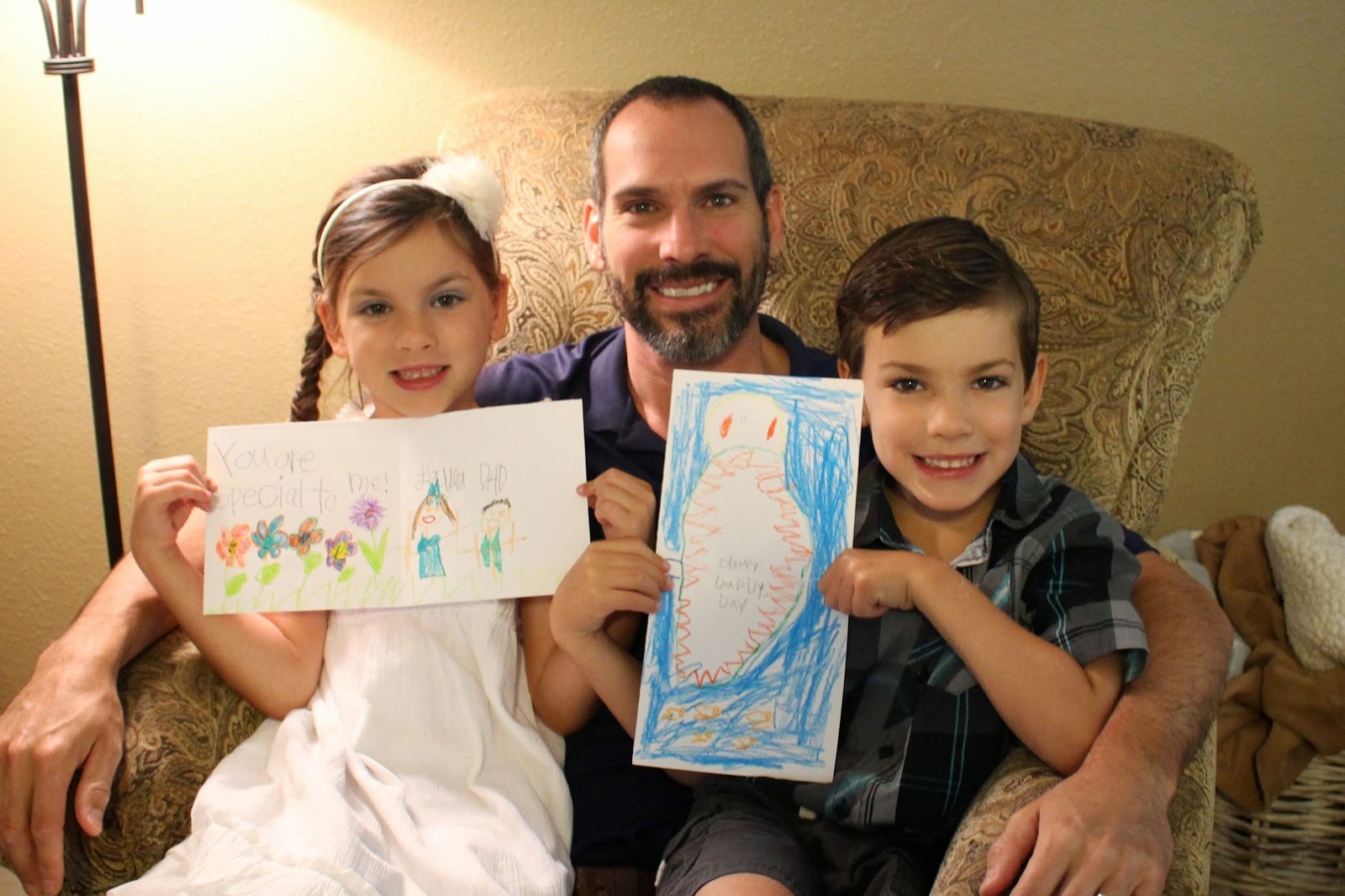 For Father's Day the 4 Webbs, Ouma, and Oupa all drove up north to the "Lake of the Pines".  Kendra's aunt Cindie lives there.  She invited Oupa's extended family up for a BBQ and boating.  We showed up around noon before lunch.  The twins went straight to the water's edge.  There were two other little kids swimming around.  That was enough encouragement for the twins to jump right in. 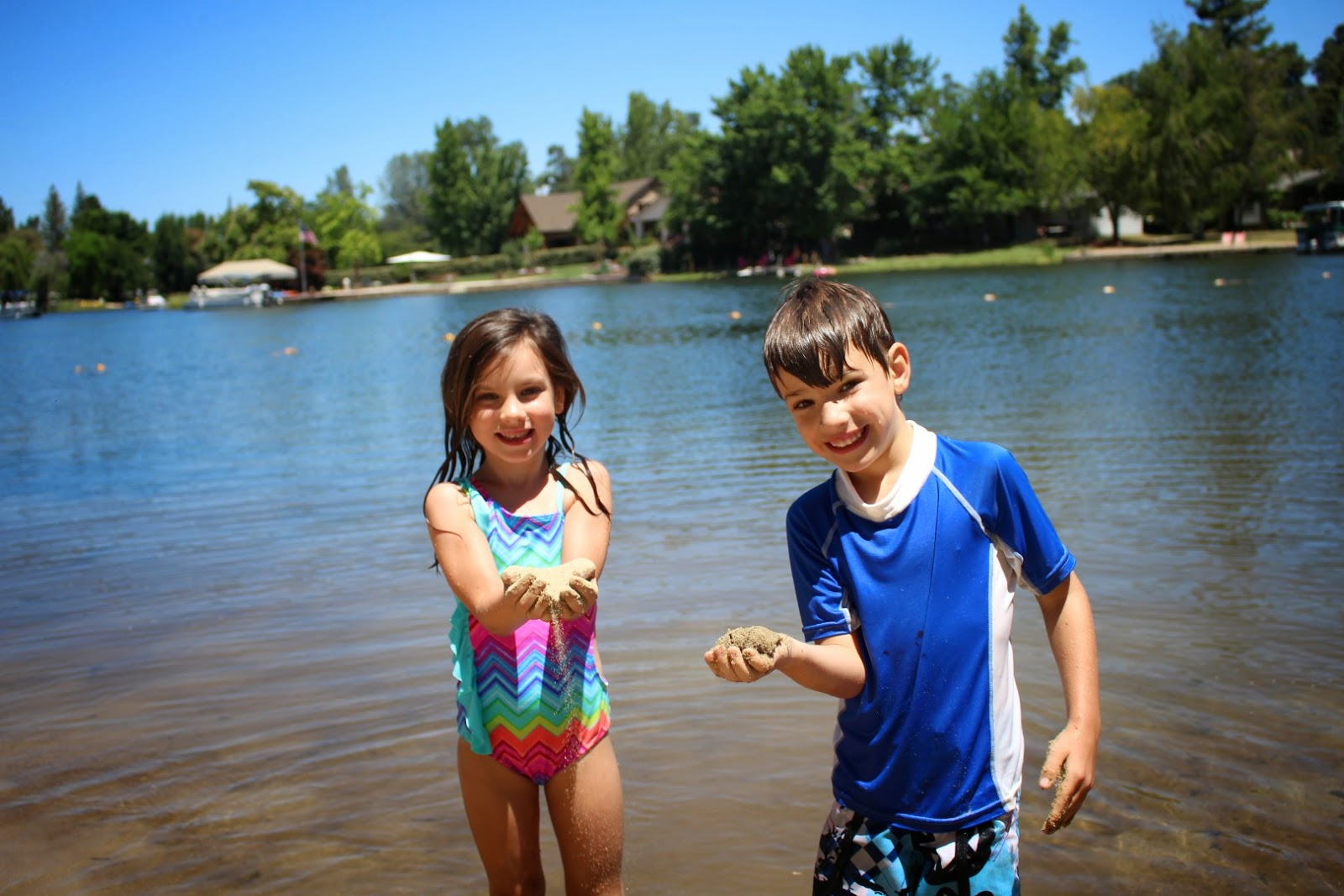 The sandy bottom and pleasantly warm temps made for a great swim time.  We also found a few rocks to have a first lesson in rock skipping.  Easton finessed a rock to get two skips out of it.  Layla had more fun just forcefully splashing the hunks of rock into the lake. 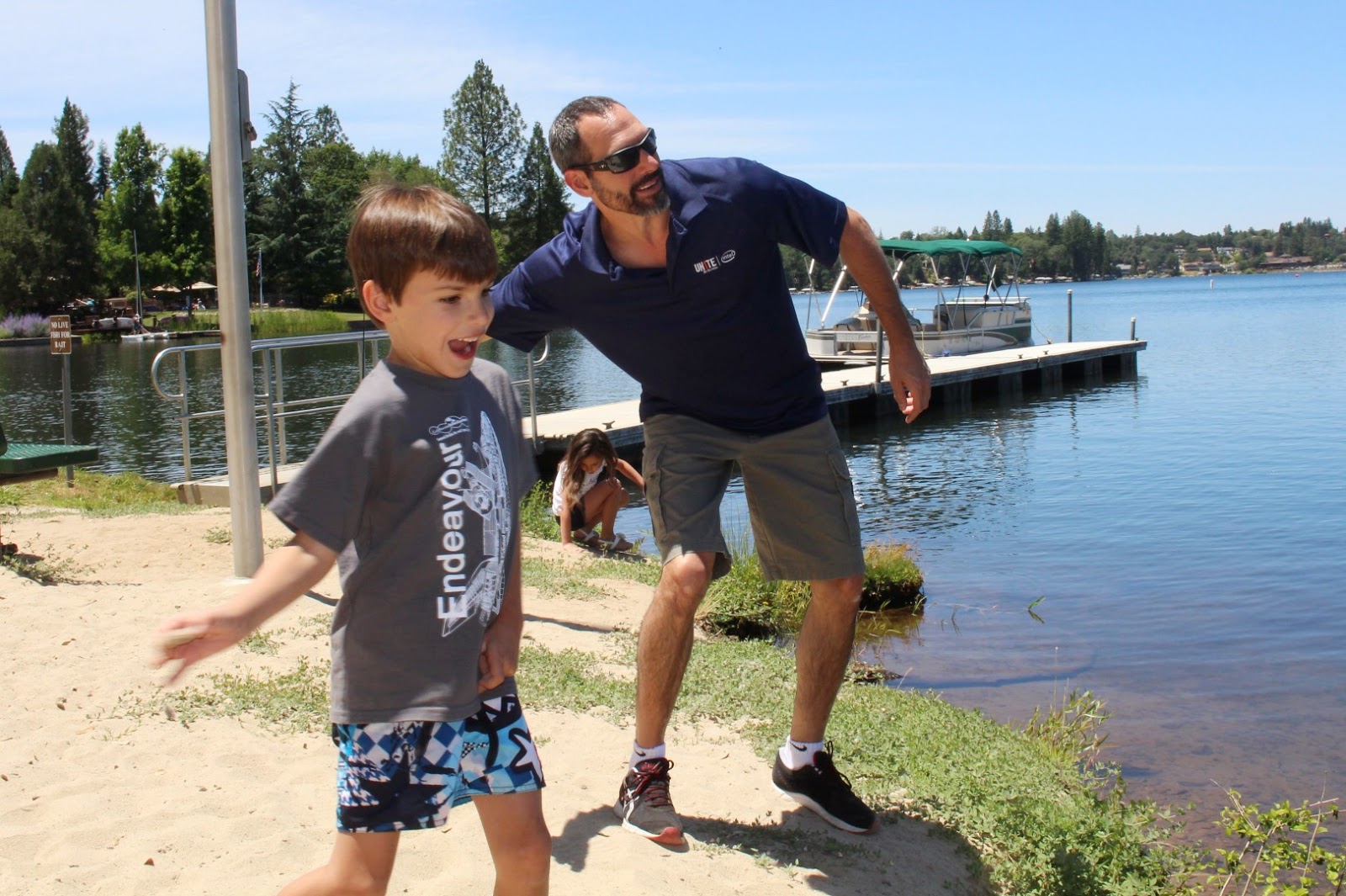 We took a stroll along the lake with aunt Cindie in her pontoon boat.  it was eventful, to say the least.  The scenery and community of houses are amazing.  Kendra kept saying, "I could live there or there... or there, in the three story mansion with a walk out boat dock and deck." 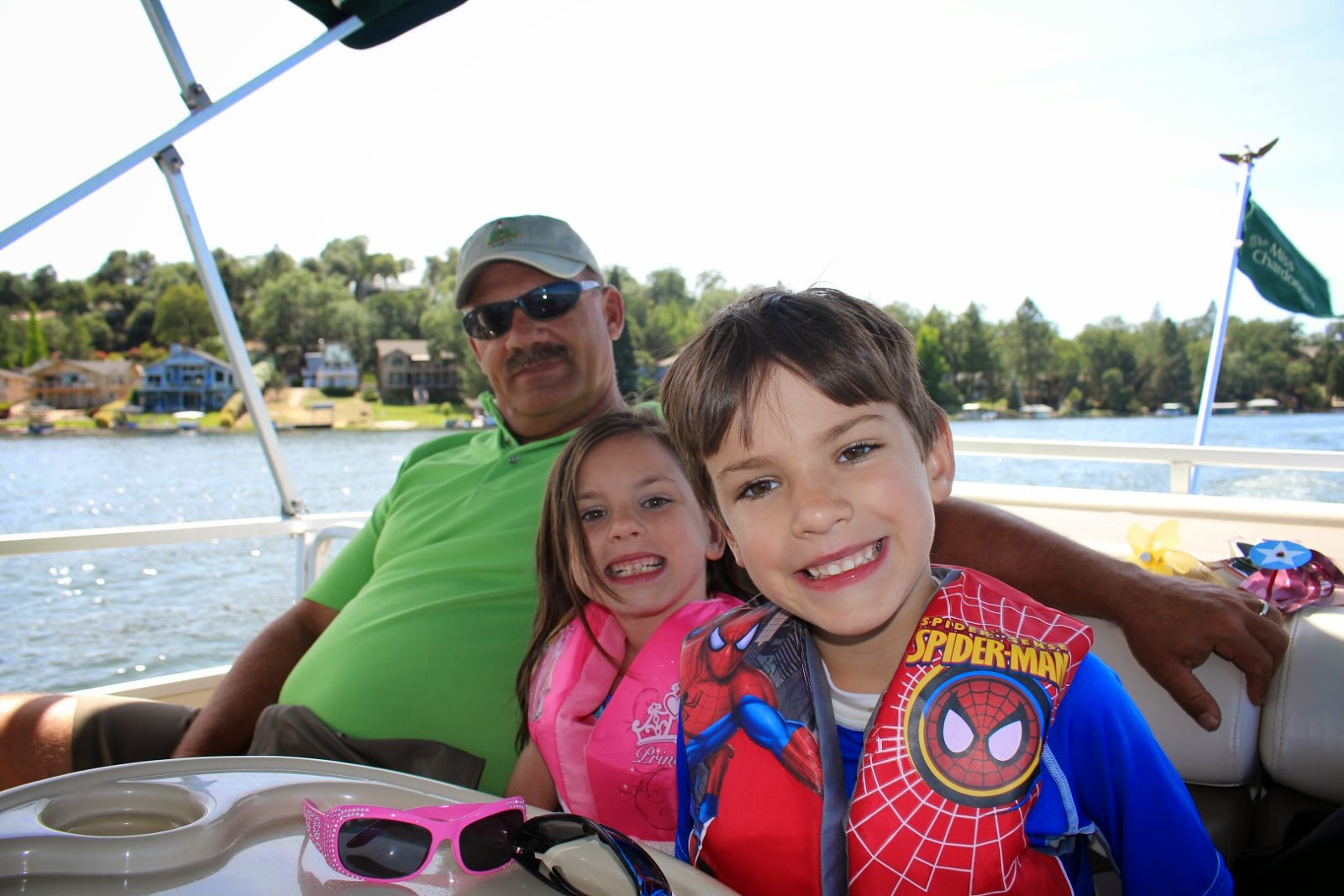 We found a calm cove and dropped anchor.  The three of us jumped in and floated around a while.  Easton and I swam under the pontoon boat.  That was brave of him to follow me.  Layla was content to swim around the outside and meet us on the other end of the boat. 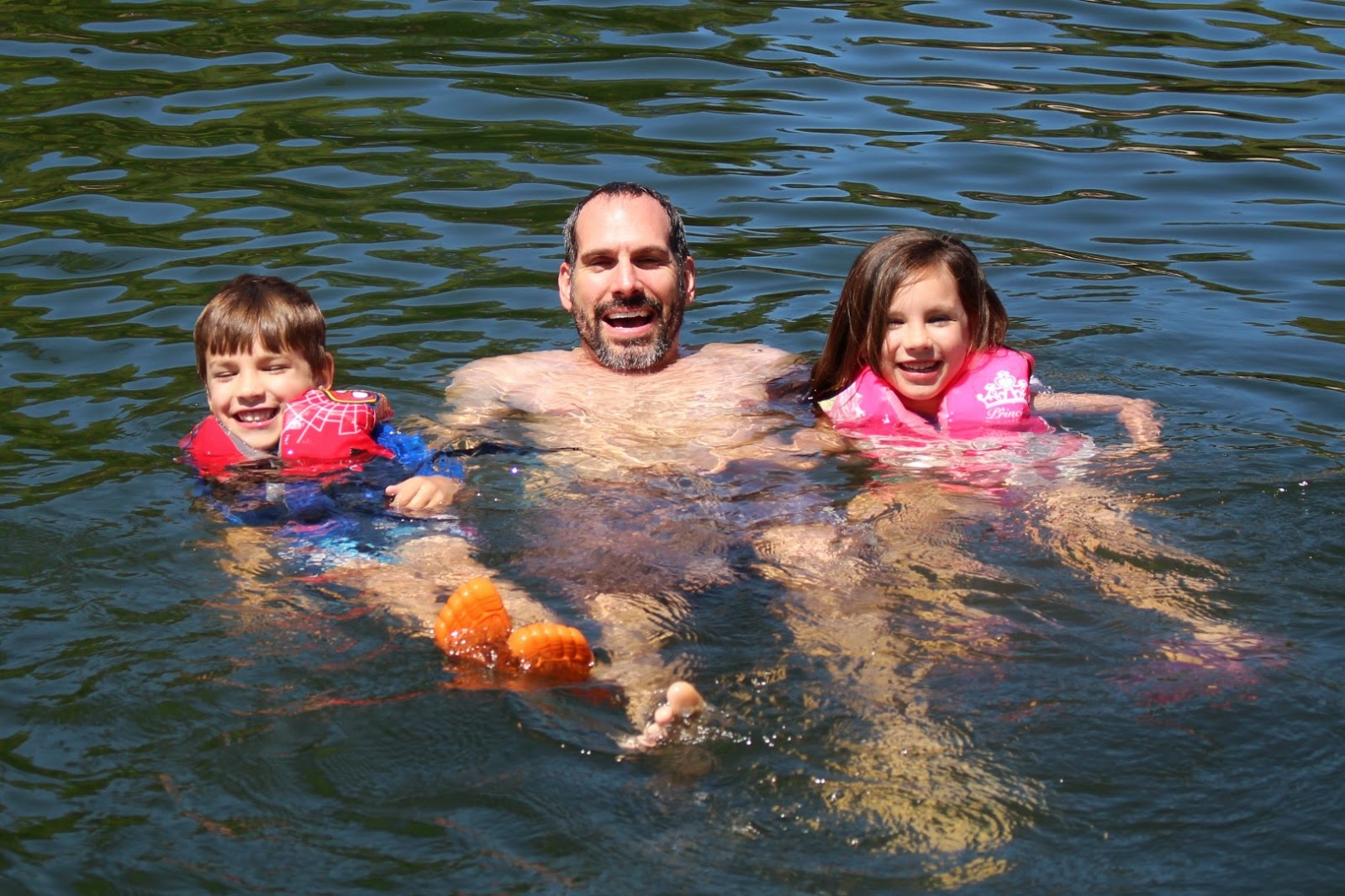 I managed to catch one of the two most important pictures of the summer.  This is the "four generations of men" picture I wanted.  To have Easton, his Dad, his Oupa, and his grandpa all in the same shot is priceless.  This is the heritage or legacy Easton is being handed.  I wasn't born into this family, but I married into it and grafted their bloodline into mine through Kendra.  Every family has good and bad they pass down through the generations.  I'm excited to see how the good ones develop in Easton's life. 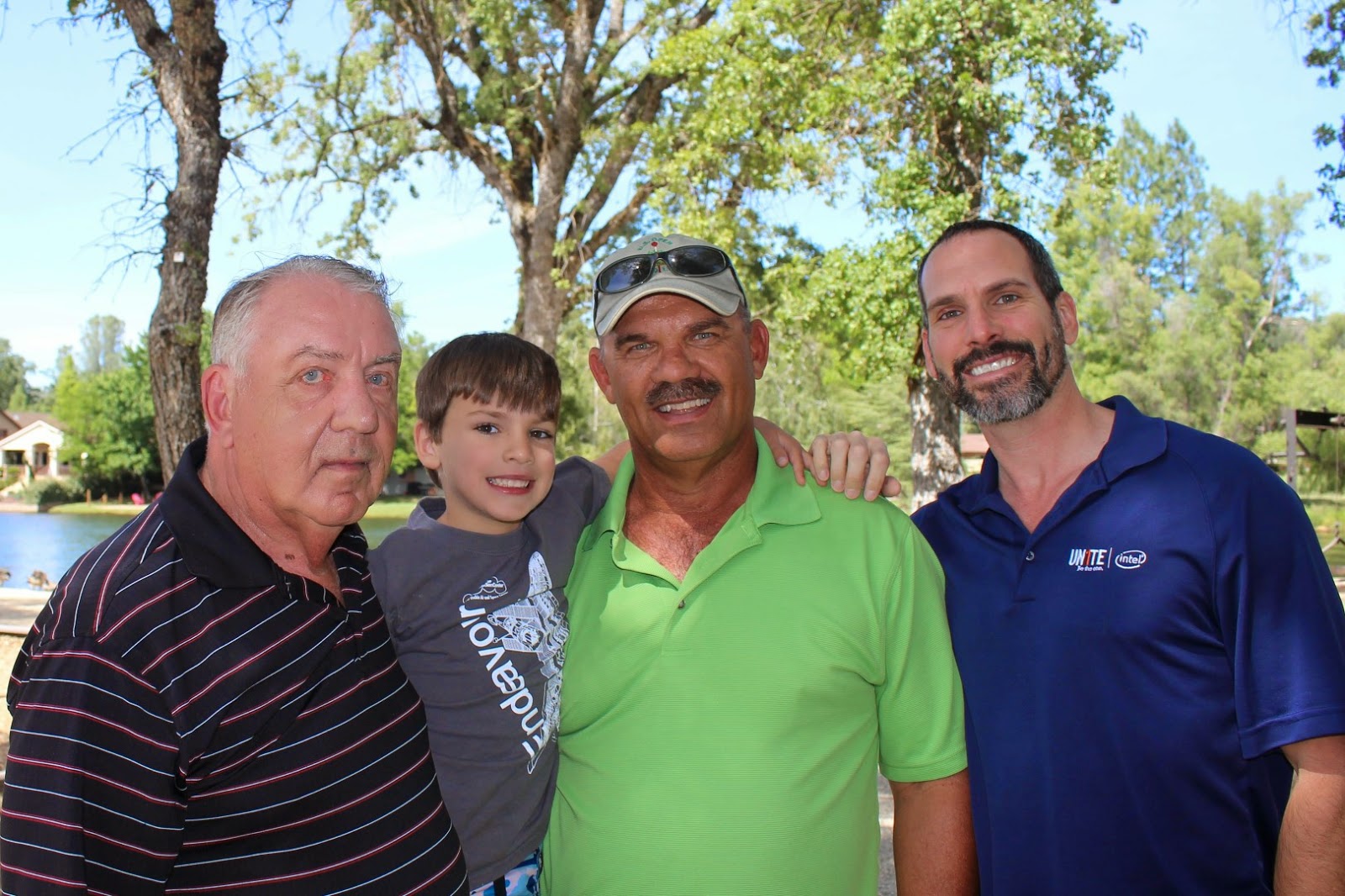 My Father's Day was special in many ways. I spent part of it with family, part of it was just quiet time for me to read my book, and part of it was playing with the twins.  I never want Father's Day to be seen as a "break" from Easton and Layla.  It's a day to celebrate being a father and I can't think of a better way to do that than being a father.  I enjoy time away from them just like every father needs, but today I just needed time to reflect on how it's a privilege and a blessing to be Easton and Layla's dad.  Twenty years from now that may be how I'm known and I'm perfectly happy with that.  They have greatness in their future, in whatever way they allow God to use them.