We are safe in Sacramento and in full vacation mode.  Here's proof.  We are alone on the outdoor patio of Starbucks.  No kids, just the two of us sitting and talking over some coffee.  This is the first vacation moment we've had in a long time.  Date night occasionally is great, but slipping into vacation mode is a whole different mindset. 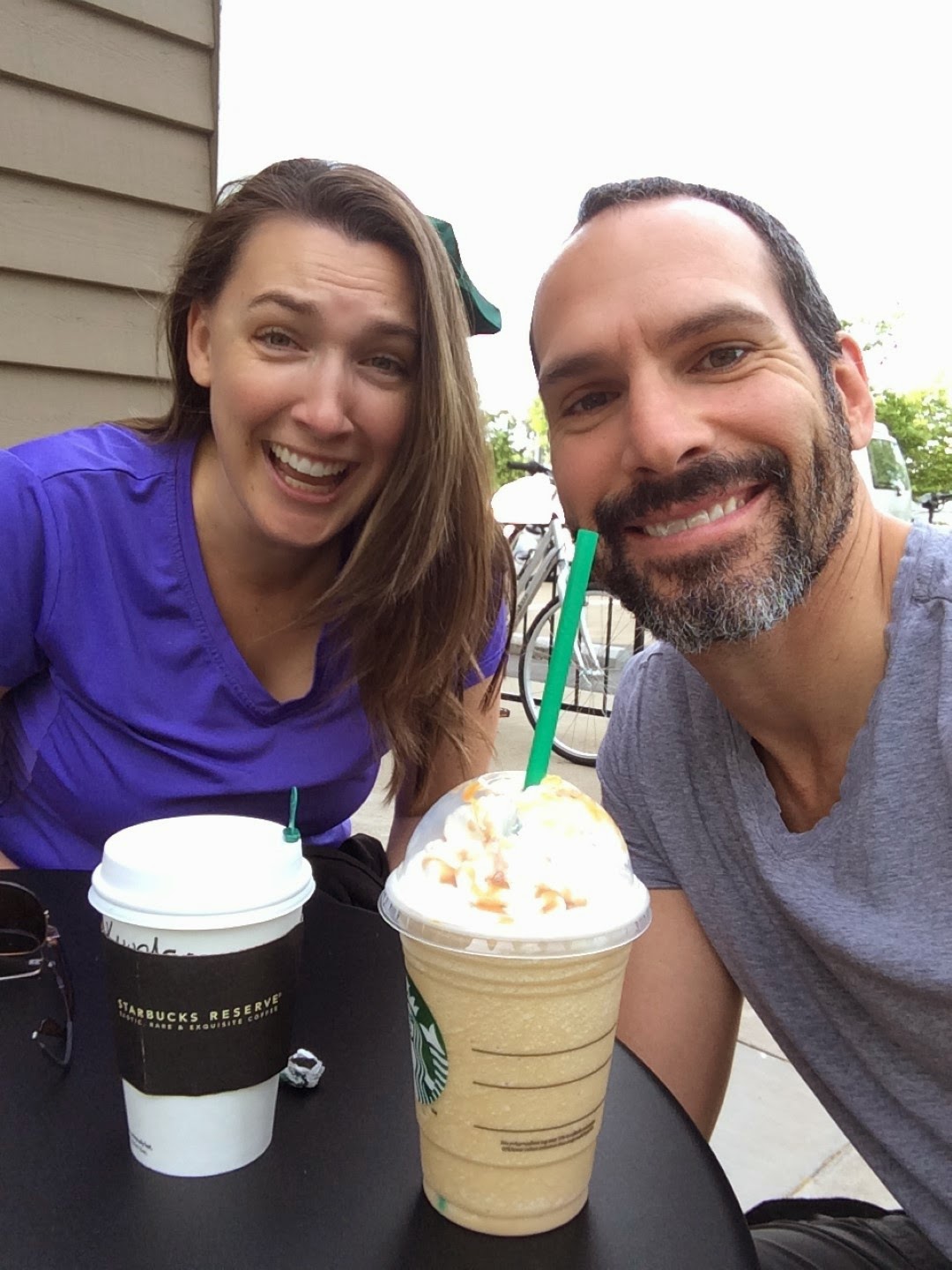 Let me back up a few days.  Kendra and I drove the twins to their last day of kindergarten on Thursday morning.  It was a much bigger deal for us than for them.  I made them stand outside the car before running towards their group of friends.  I am stunned to think Easton and Layla are first graders.  No matter how we respond to these events, time marches on. 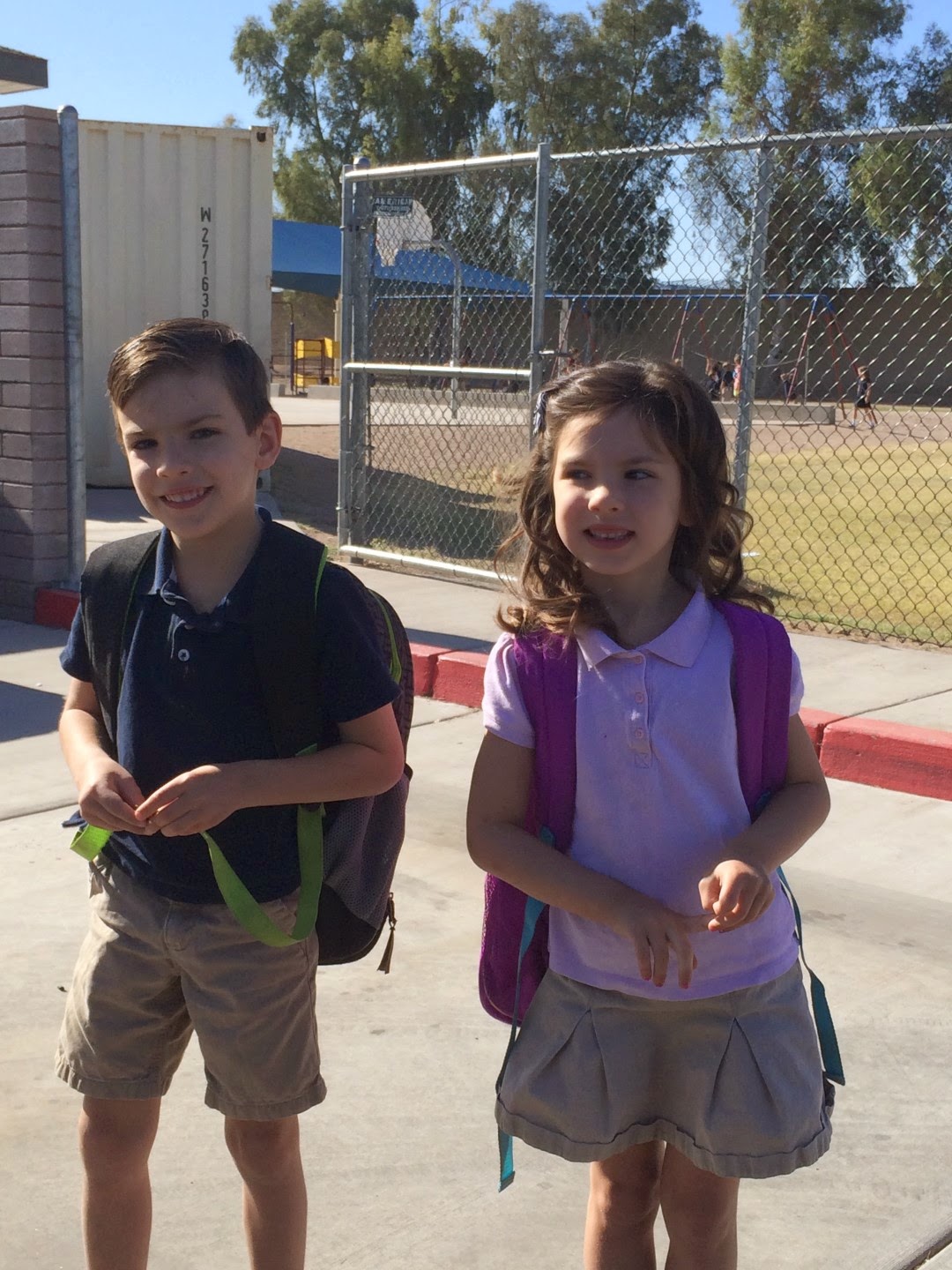 Kendra brought a few new clothes for the kids because they keep growing.  Easton came running up to me and pointed out the man in a space suit.  Of all the careers and hobbies represented, including a pirate, rock star, and skier, Easton was super excited about the space man.  He had no idea at this time what we had in store for him this weekend. We loaded up the minivan and headed out bright and early Friday morning.  Easton and Layla had their first ipod experience.  They could each listen to their own music and control which song to play.  The experience was freeing for them and provided an hour or two of quiet time in the car for Kendra and I to talk. 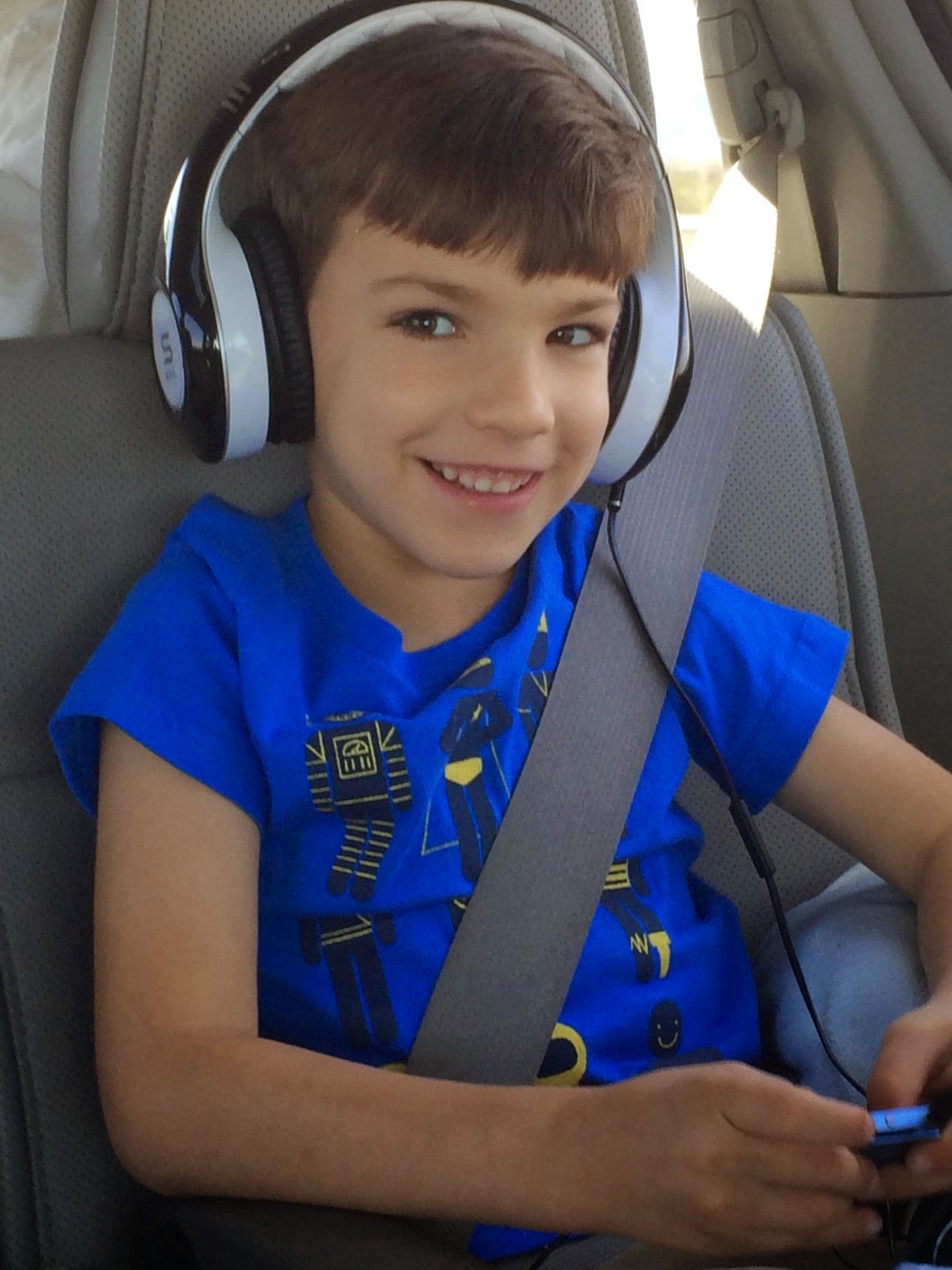 layla provided a background vocal track for us as she sang her way through the Frozen soundtrack.  She said, "who put these songs on here?"  I smiled proudly and gave her that loving look as she realized it was me.  Daddy takes care of his princess. 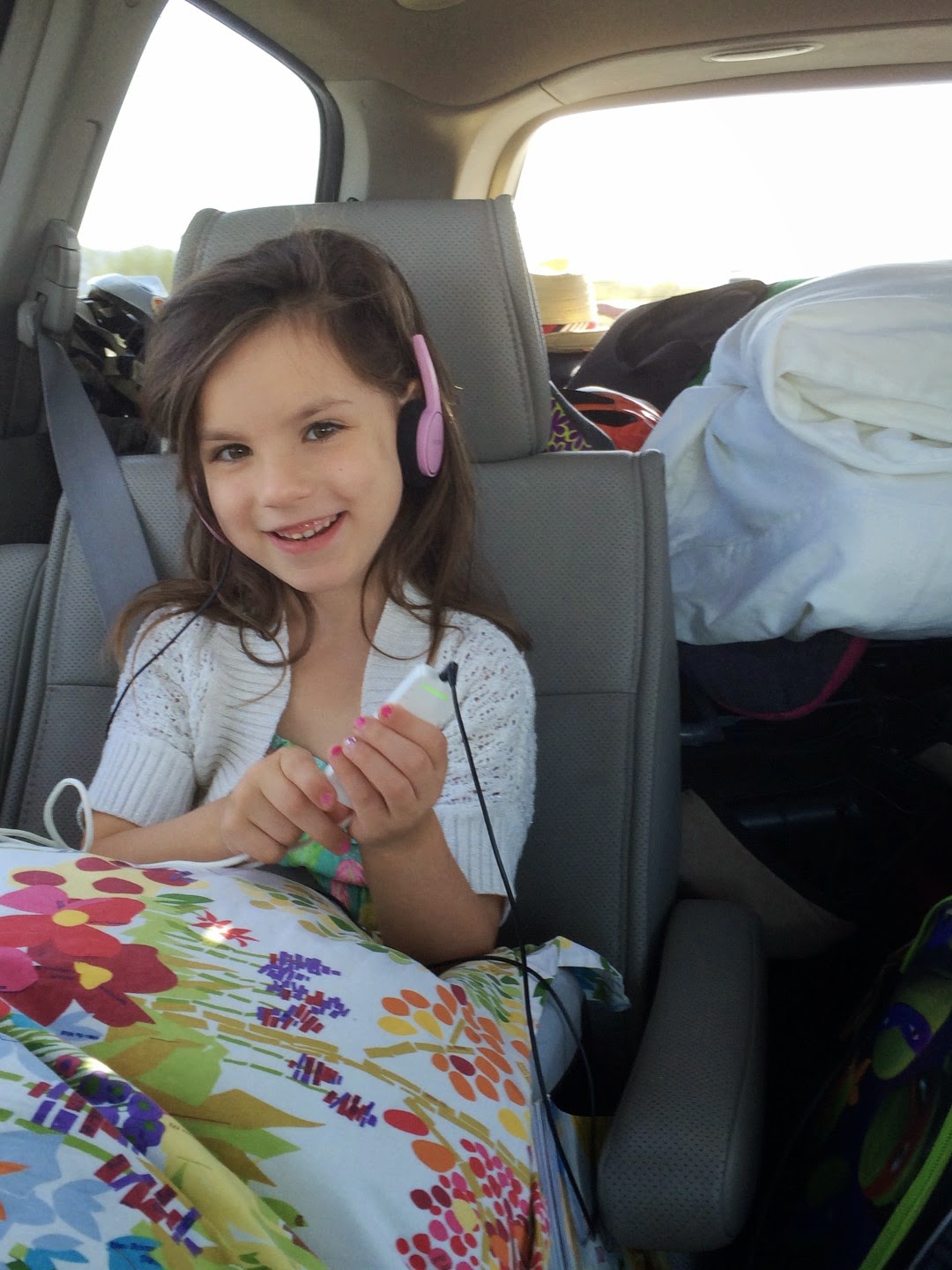 A few months ago i searched the internet to find the final resting place of the existing space shuttles.  I saw this Endeavor was in L.A. only a few minutes off the highway from where we drive by on our trip to Sacramento.

We arrived in Los Angeles at the California Science Center on time and in one piece.  Against all odds of crazy holiday weekend travelers we did well.  The twins were running up and down the sidewalk working out 6 hours of energy.  We passed by a mounted Lockheed SR-71 Blackbird.  I asked Easton if he wants to fly one someday.  He said, "No thanks, I'd rather fly a space shuttle." 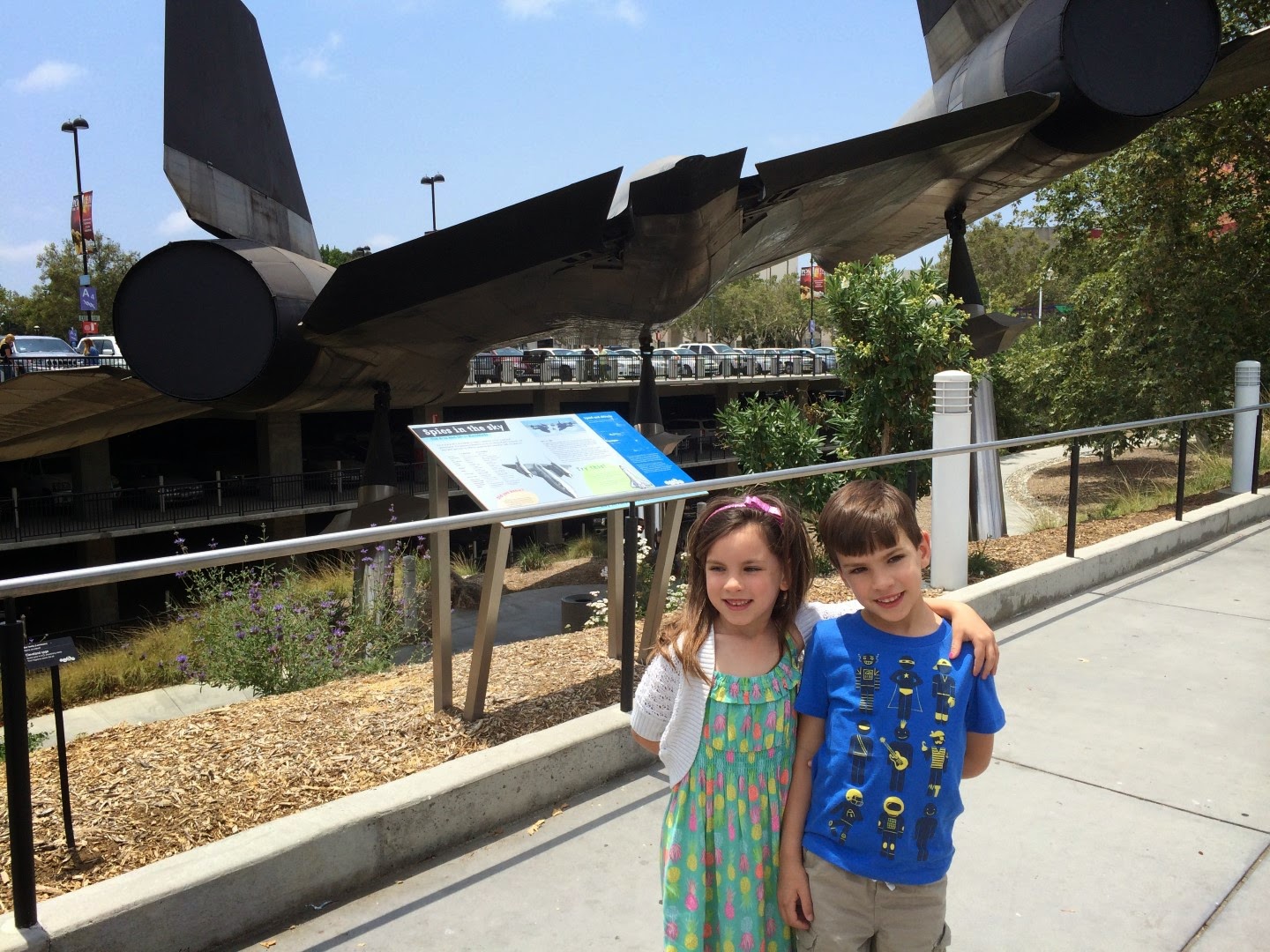 Our discussions over the past few days were geared towards watching the Imax version of the Hubble 3D. 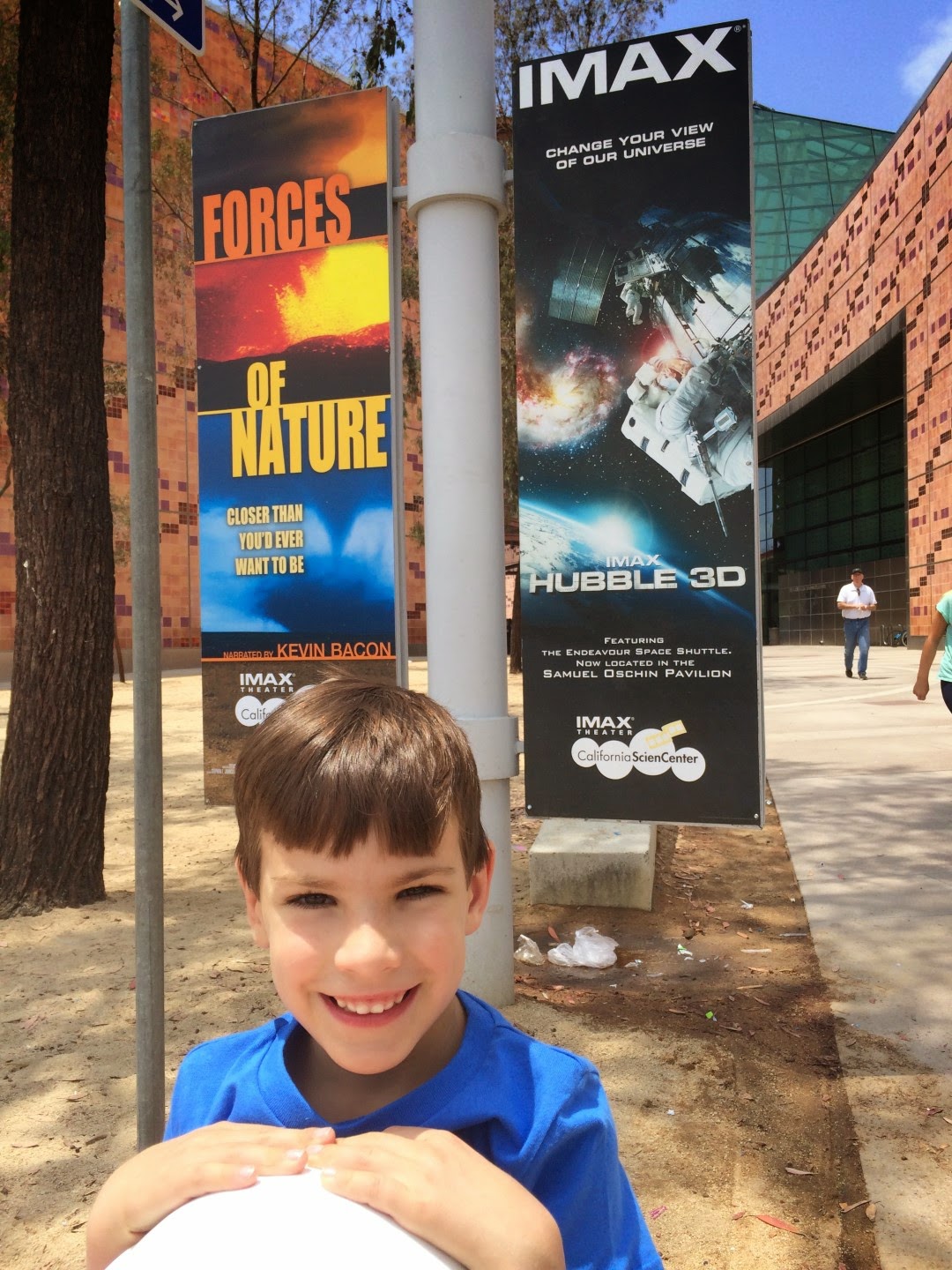 We were among the first people in the massive theater so we found the premium seats in the middle of the middle row.  The Webbs see things differently than other people.  I wonder why? 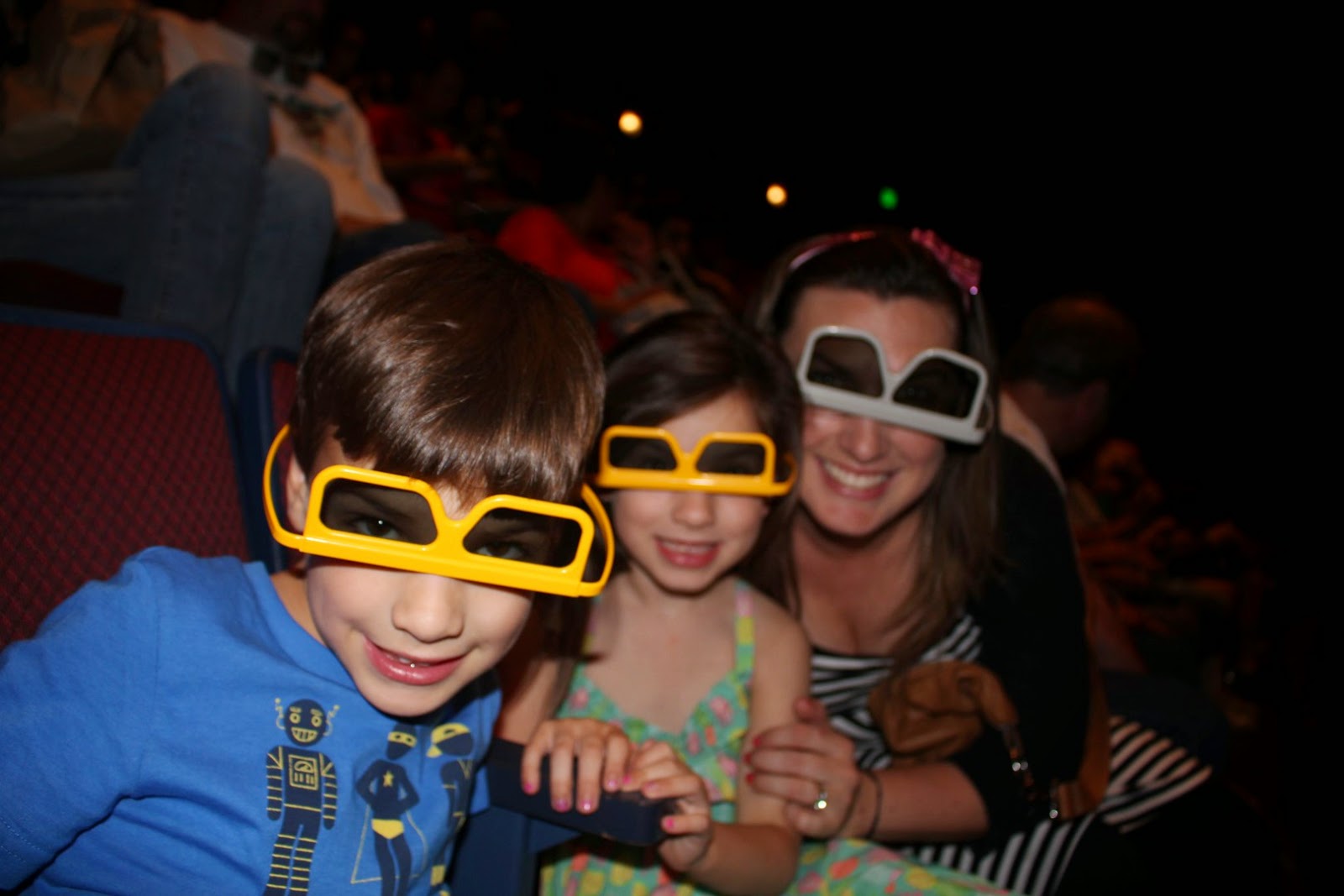 The 3D aspect was humorous to watch because the twins kept reaching out to grab the stars and space equipment.  The movie was awesome.  They both said this was their favorite movie experience ever.  The 3D glasses are ridiculous looking, but we know better than to care what people think. 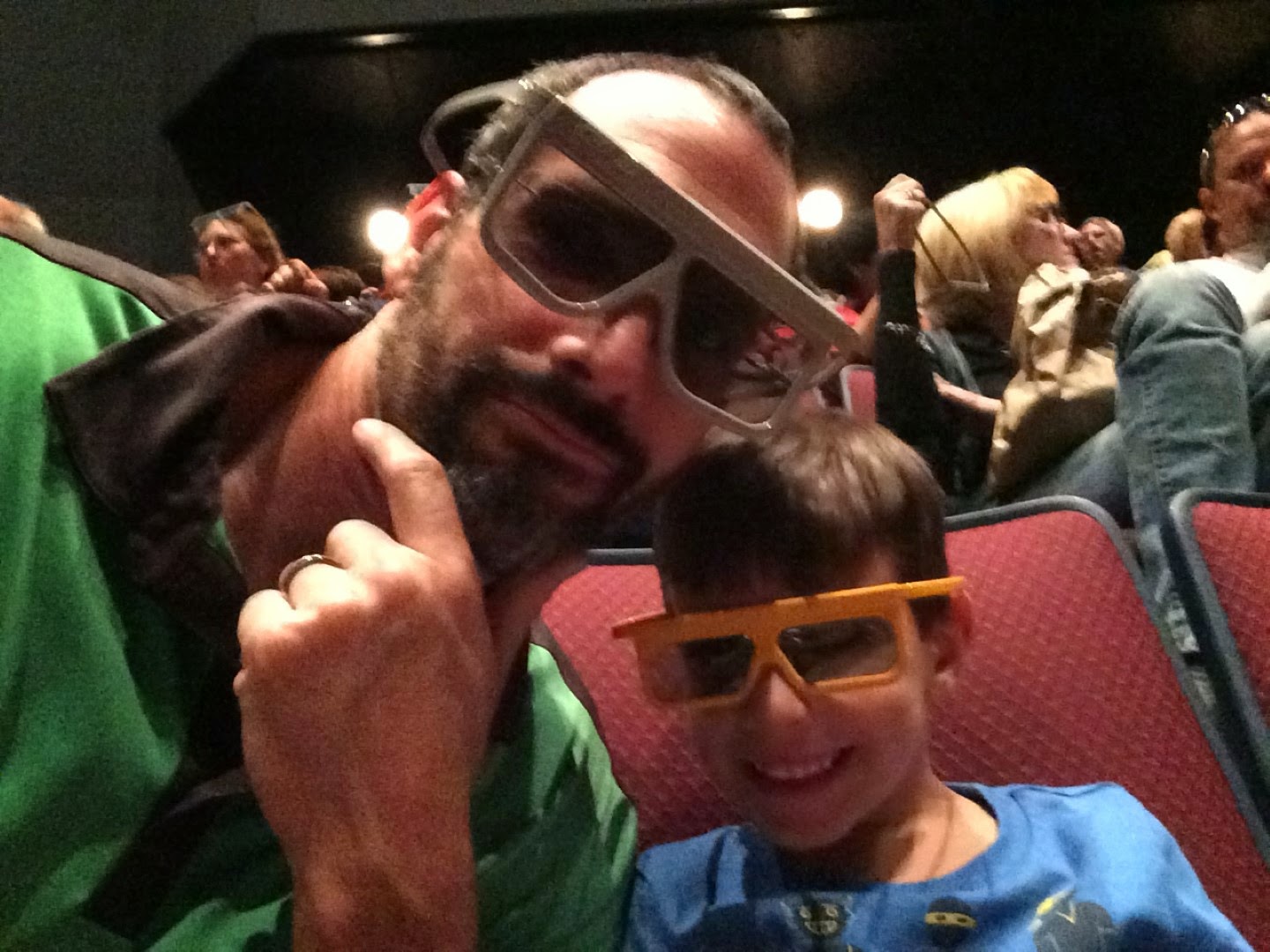 Lunch was uneventful other than the fact we ate our bland sandwiches with real satellites suspended above our heads!  Easton was calling out the names of each one and realizing there are many he has never heard of. 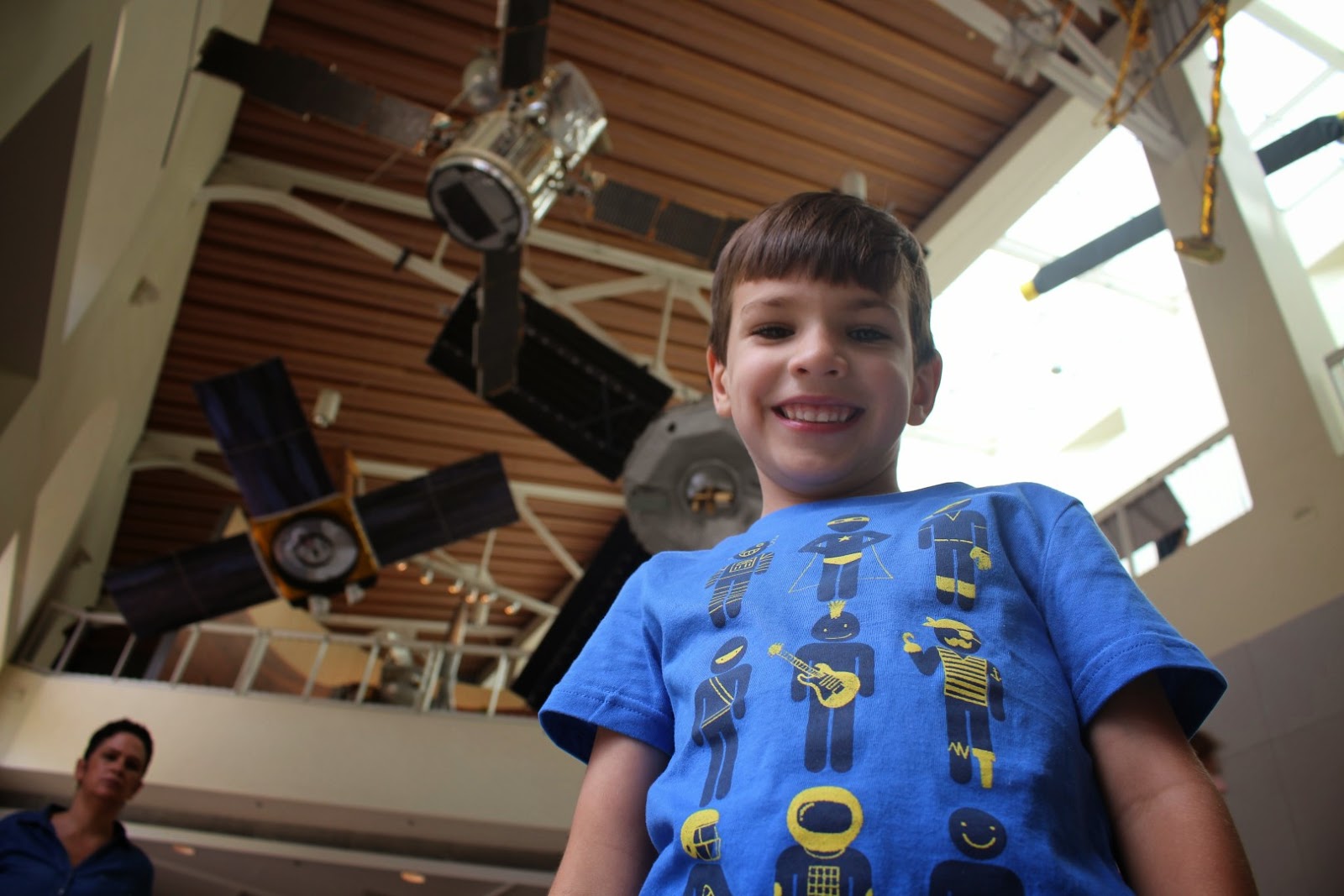 While waiting for the indoor events we played in the outdoor area.  The overcast, cool afternoon was a welcomed reprieve from the hot AZ sun of the past few weeks.  They were a little chilly at one point and we were perfectly happy with that. 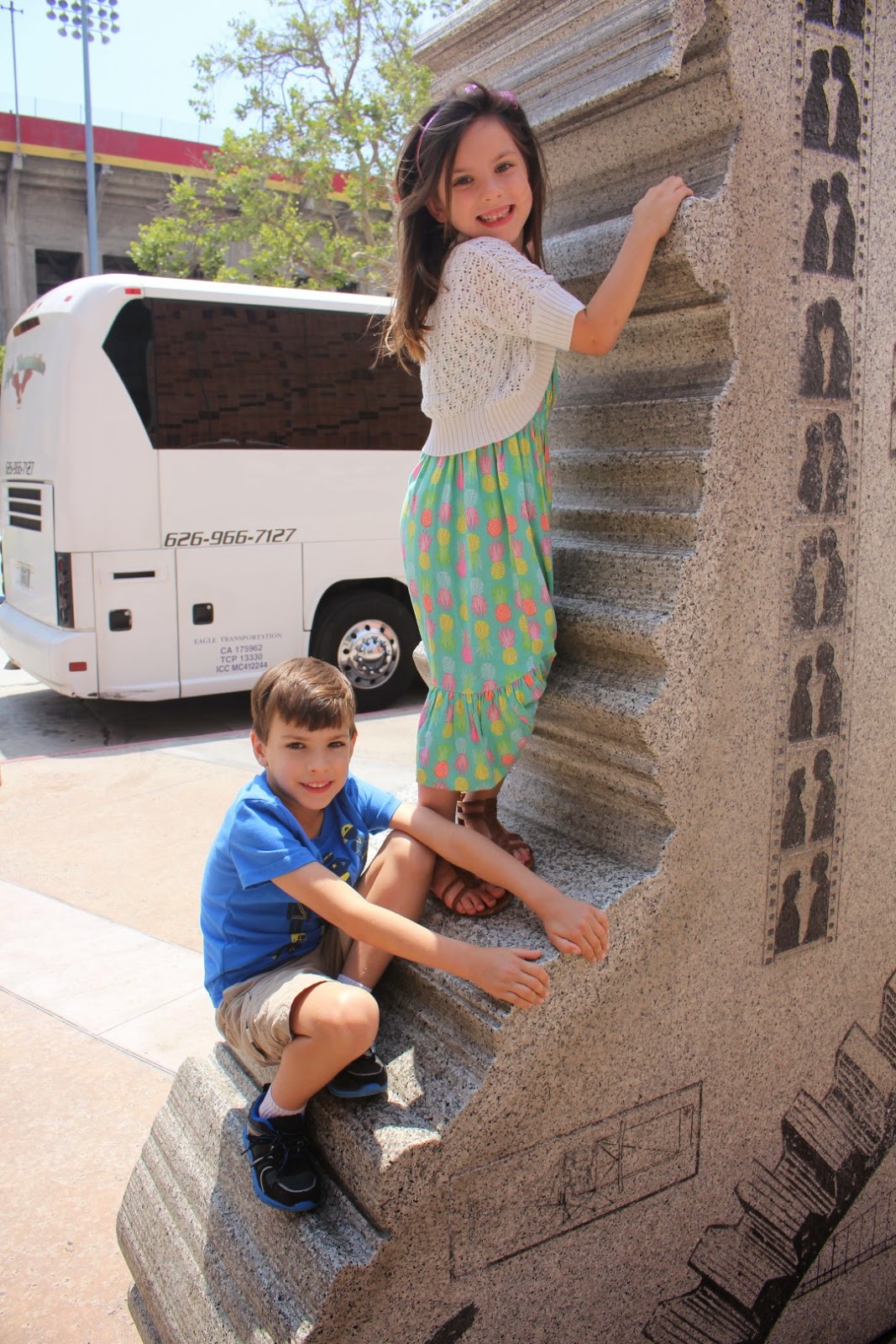 The sculptures were all kid-friendly.  Otherwise it would be torture for the hundreds of kids milling around.  We were surrounded by many school groups, but held hands while wading through the waves of kids.  There are many favorite pictures from our fun day together, but this is one of my favorites because it shows their personalities and cuteness even through the sun-induced eye squinting. 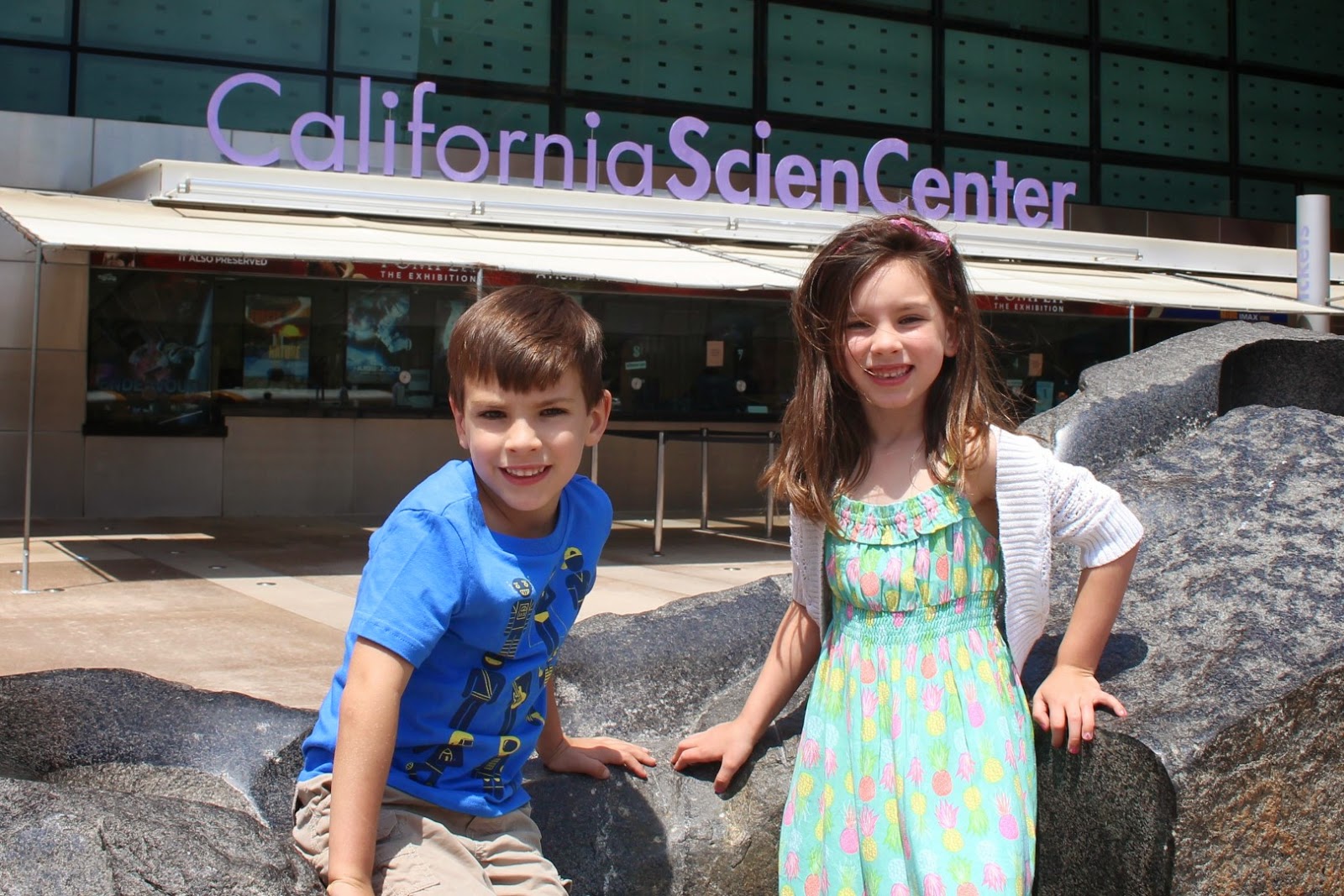 and no outdoor fun is complete without playing chase.  Best friends at their best. 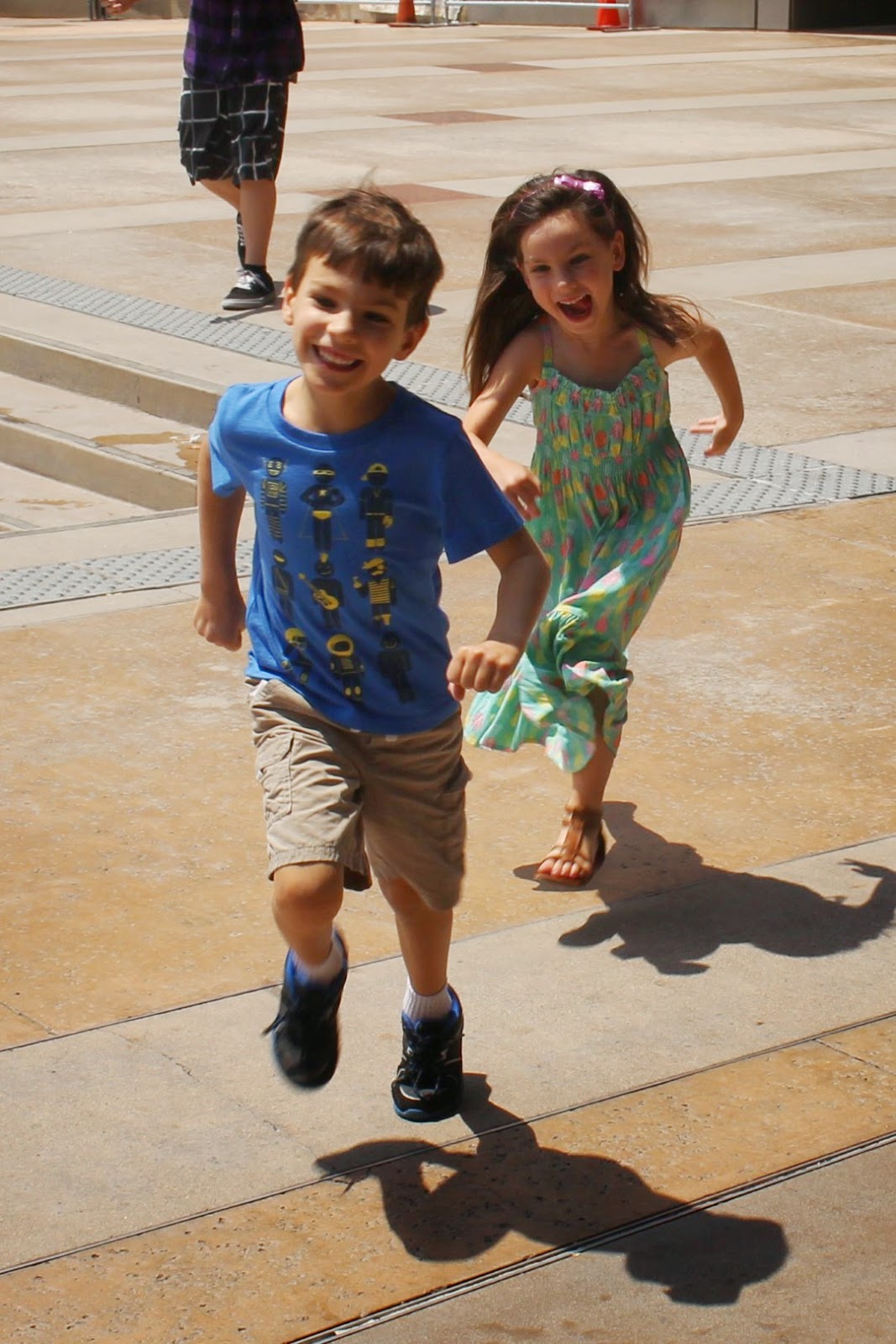 The inside of the atrium is filled with gold ornaments hanging down on strings.  We had almost as much fun playing around outside together as we did inside the science center. 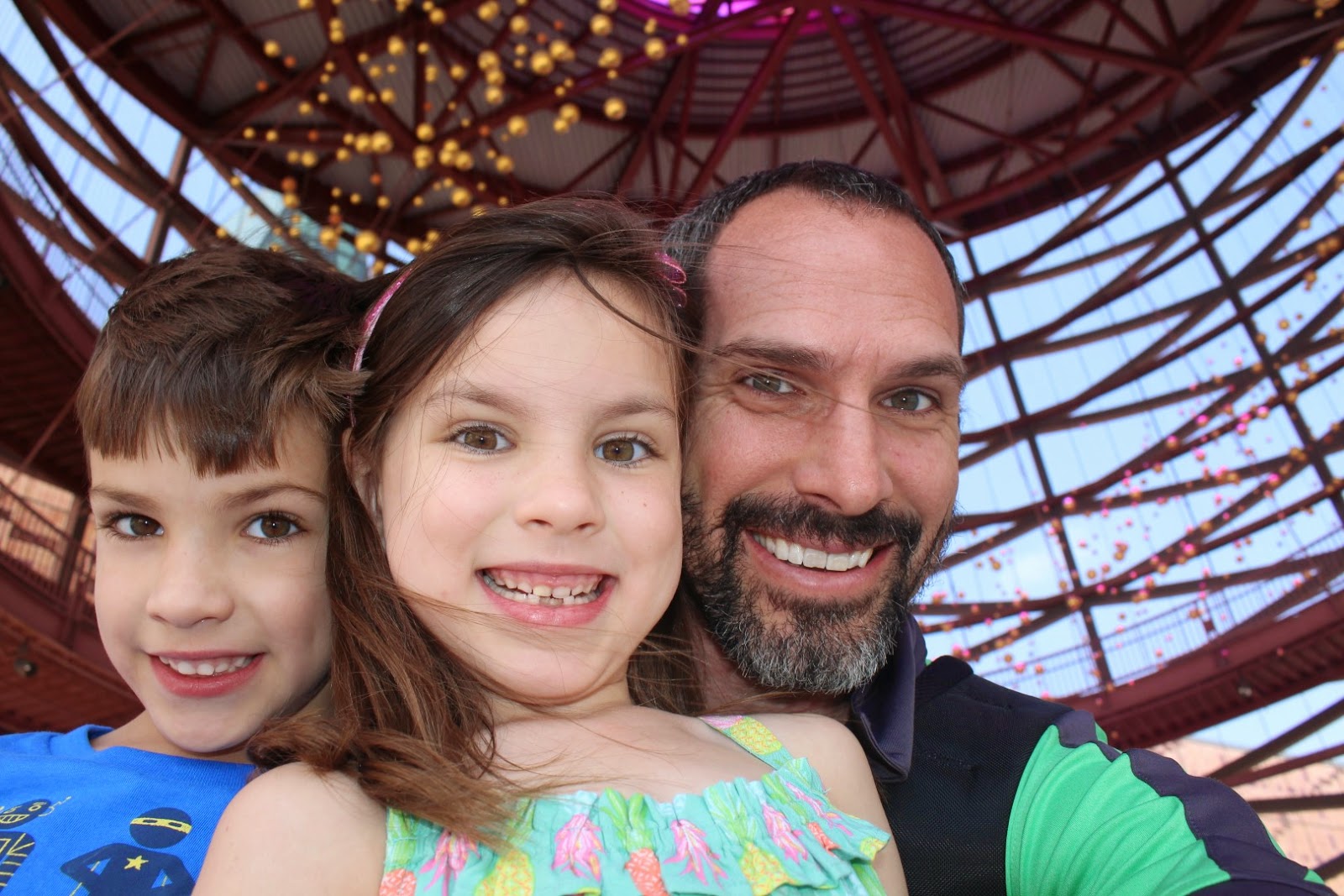 After the Imax movie we headed for the real reason for the trip.  to see the space shuttle.  On the way through the cattle lines we passed a flight simulator.  Easton wanted to go, but Layla didn't.  She happily stood outside watching while Easton climbed inside with 5 strangers.  During the 7 minute simulation he experienced a take off, orbit of the Earth, and landing. 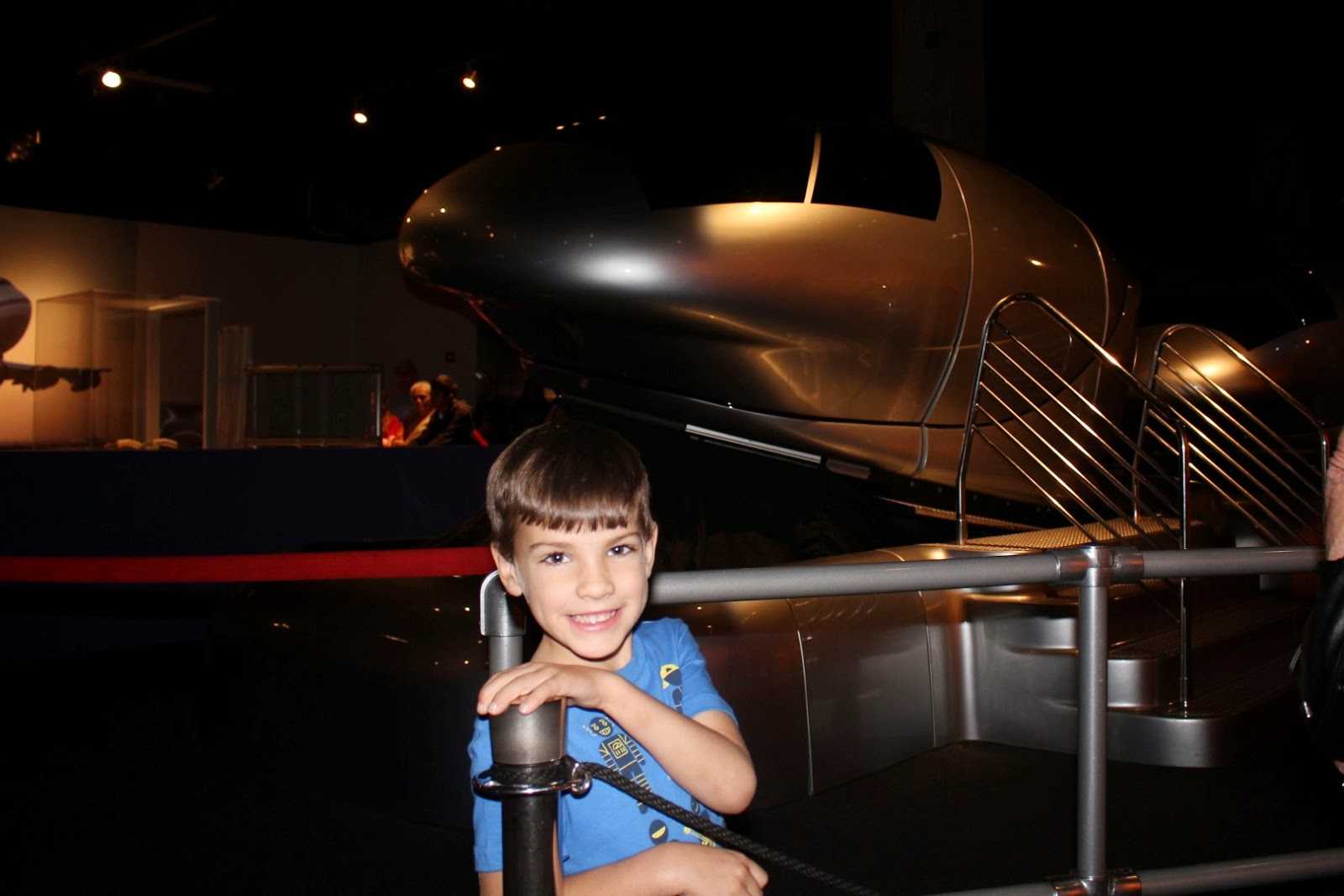 Then we walked into the building where the actual space shuttle Endeavor resides.  It takes a lot to leave me speechless, but seeing this massive piece of technology and history was overwhelming.  No matter what else we experience for the rest of our summer, this will be the time-marker we refer to.  We'll say something like, "Oh yeah, you mean the summer saw the space shuttle?" and all of us will nod our heads. 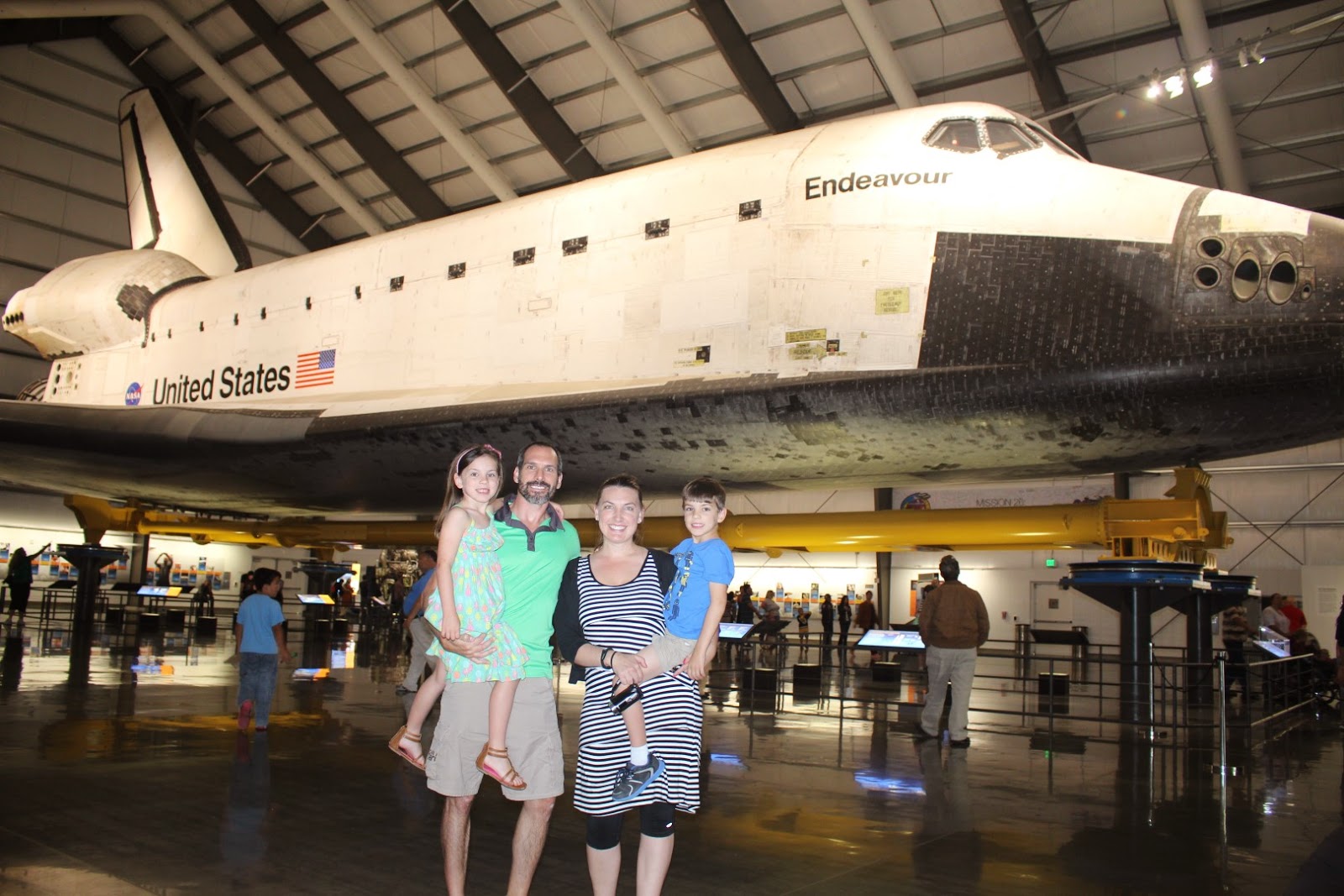 The one moment of the Los Angeles experience I wanted to capture was Easton's first sight of the space shuttle.


After several minutes of Easton looking at the space shuttle I convinced him to let me take a picture of us with the rocket powered bird behind us. 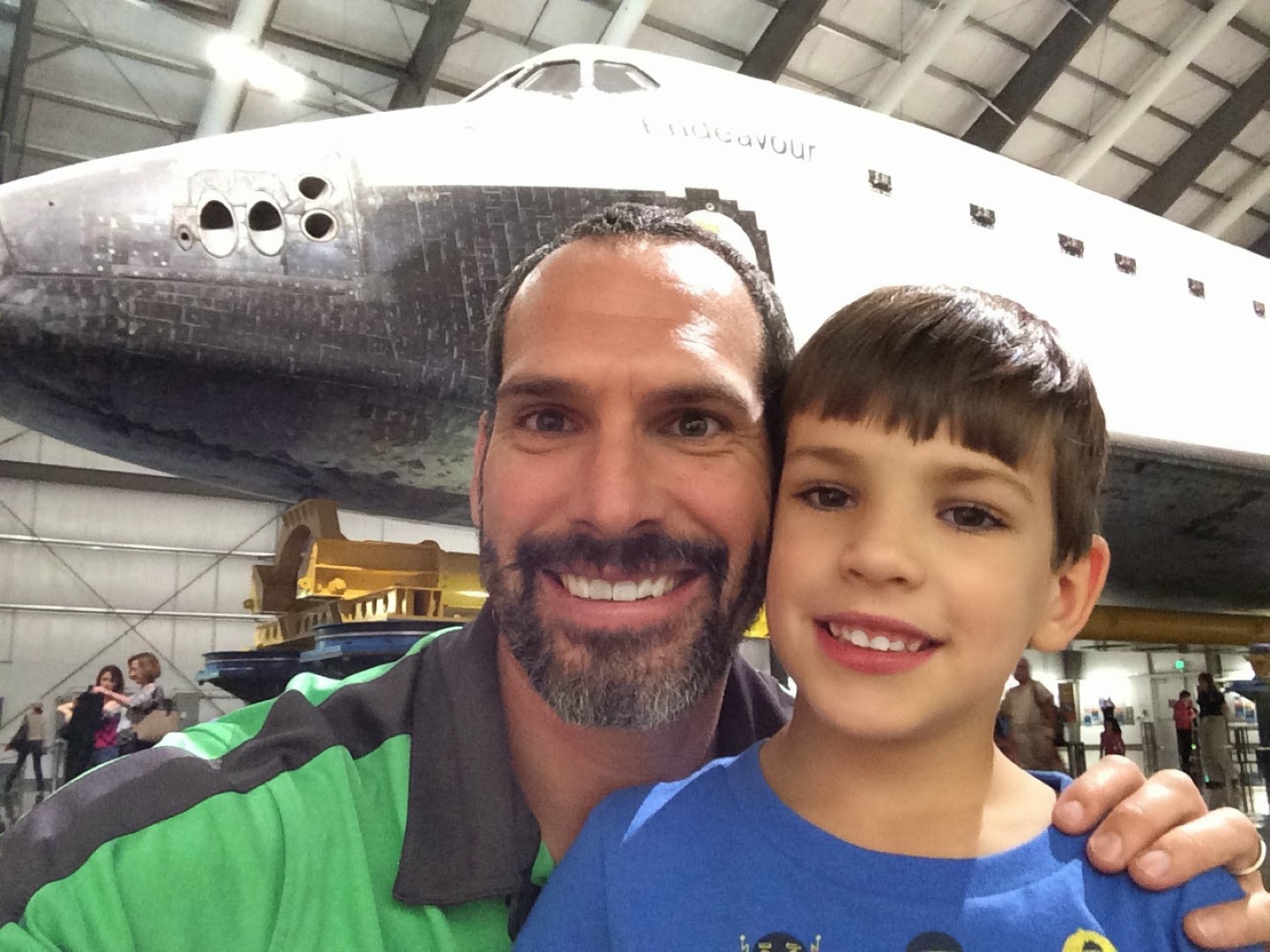 This may be the closest Easton ever gets to space travel.  Or maybe not.  That's not for me to decide, but his passion for space is obvious in every aspect of his thoughts, creativity, desires, and motivation.  He was only inches away from one of the few spacecrafts that did what he dreams about. 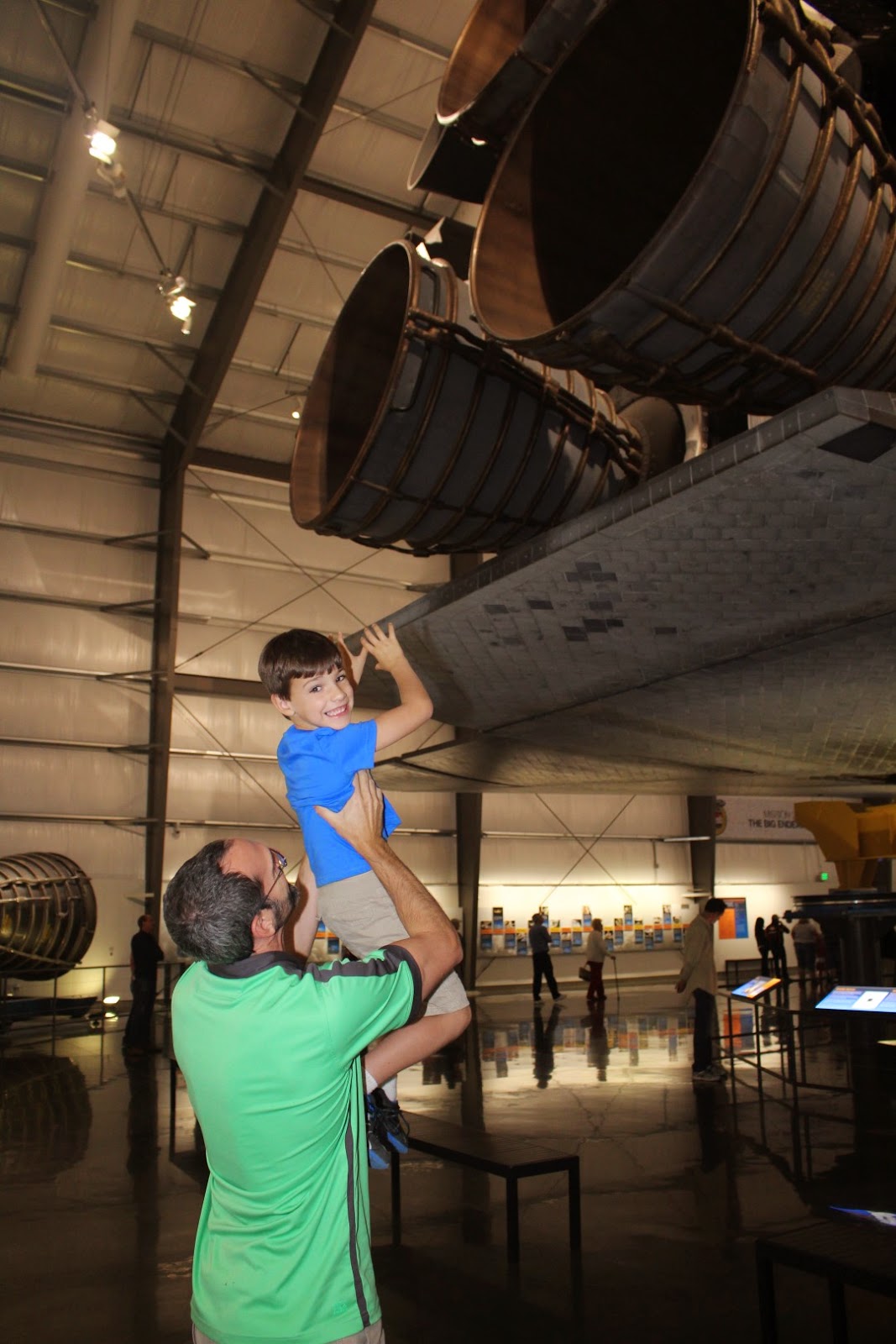 The stand-alone engine shows the magnitude of the pieces that make up the gigantic shuttle.  It's tough to see the length at this angle, but I was impressed with the huge size of the rockets. 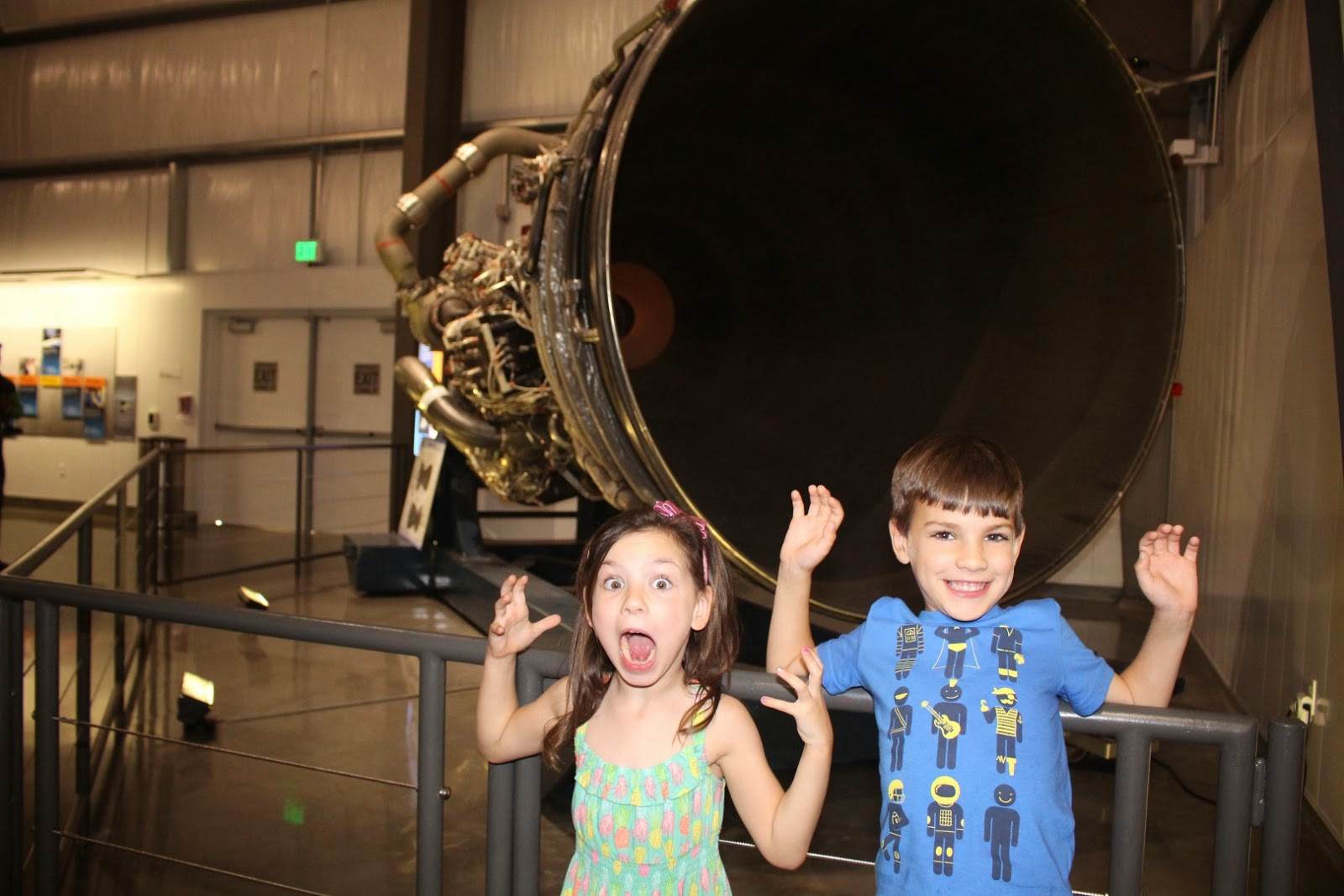 Easton left with a couple of souvenirs.  I wanted to get him a shirt.  Even though it will deteriorate over time and he'll grow out of it, I still want him to have something to wear as a proof of his experience.  Sometimes I have to tell Easton to smile, but this picture shows a genuine happy smile. 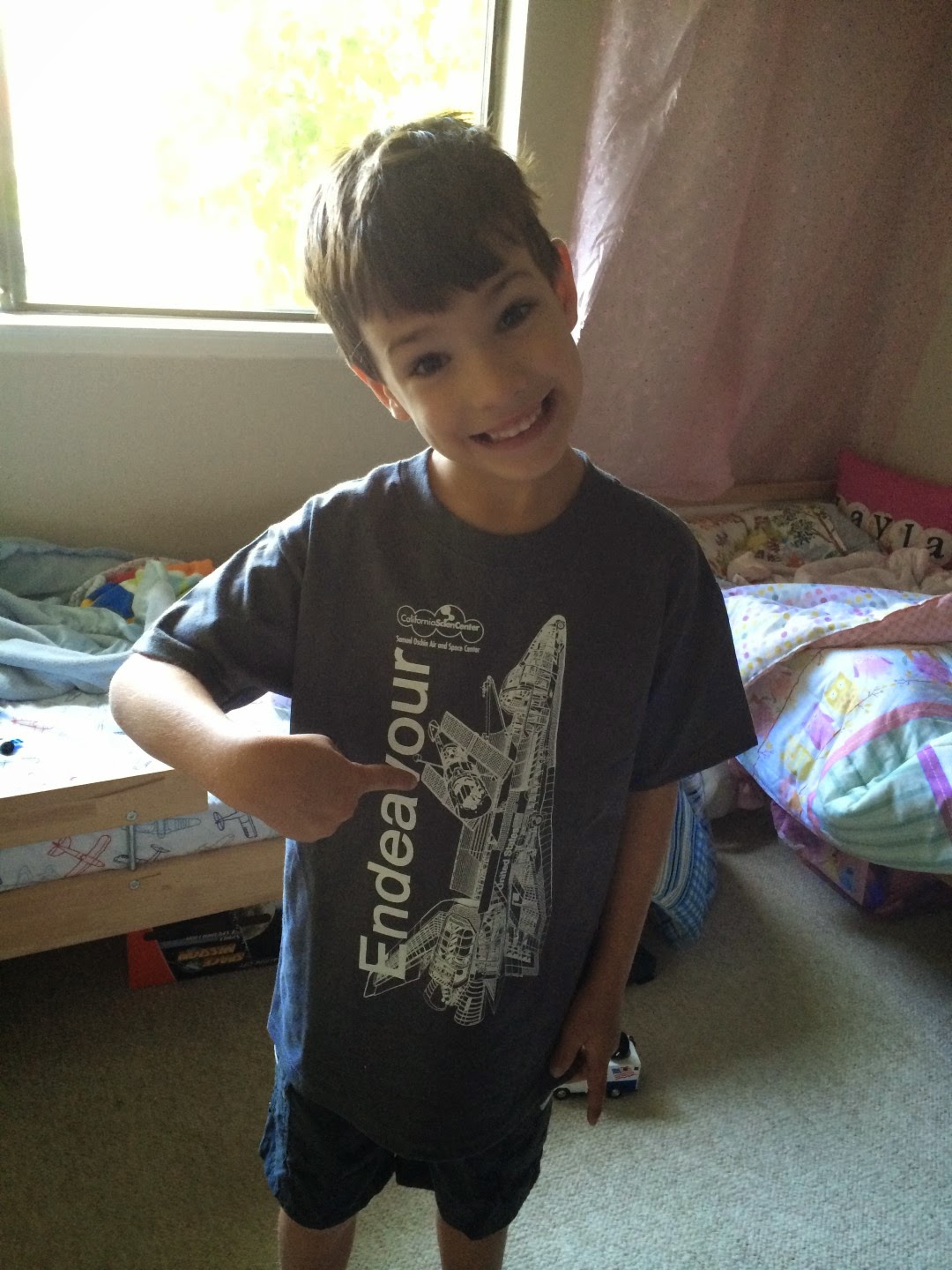 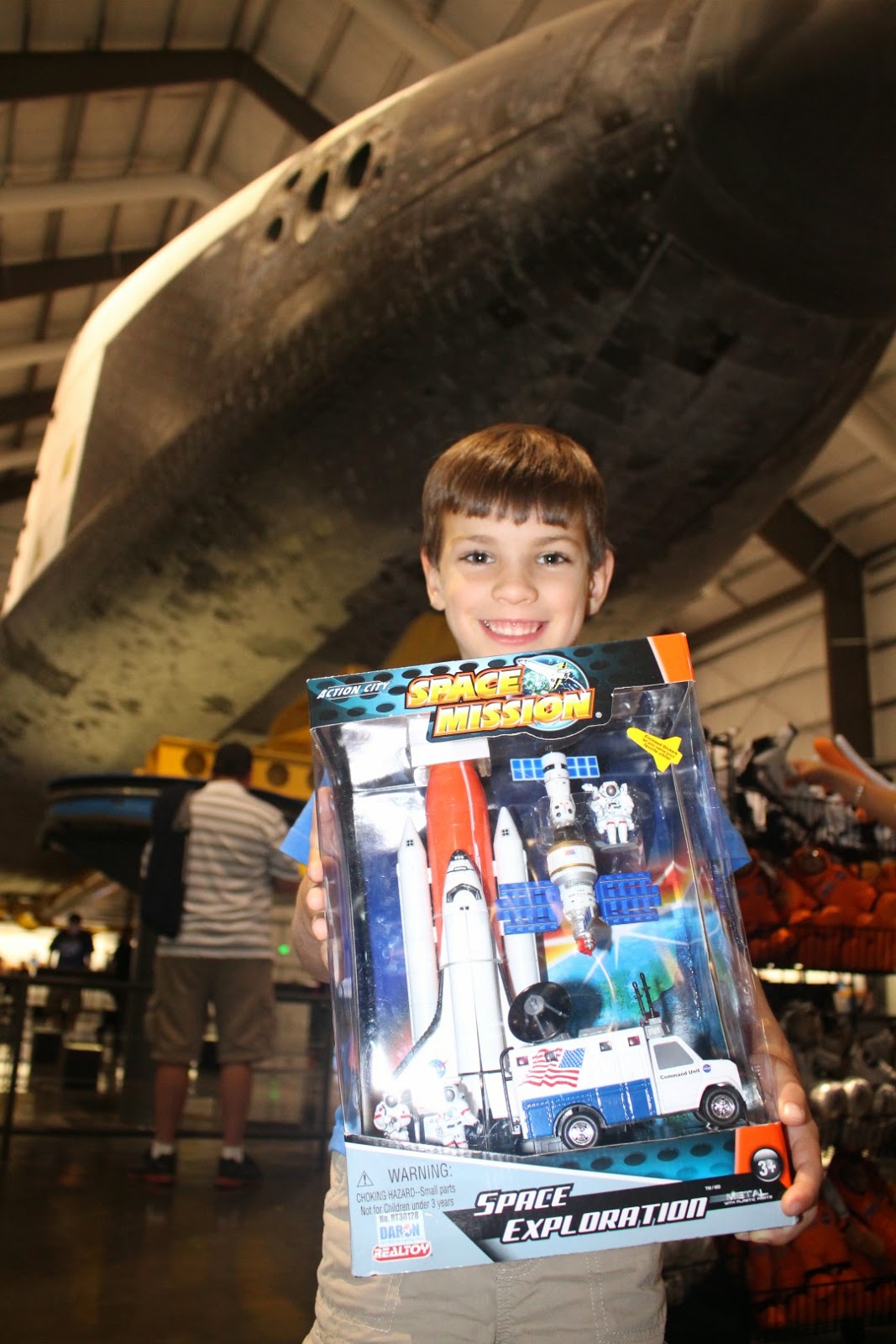 The oddest thing about the space shuttle was the archaic appearance.  I couldn't believe how ancient the whole thing looked.  I expected something more majestic, but instead I just shook my head in disbelief about how something so old unsophisticated could take astronauts to space and back so many times.  Even though we made this stop for Easton's benefit I enjoyed the whole day.  We all did. 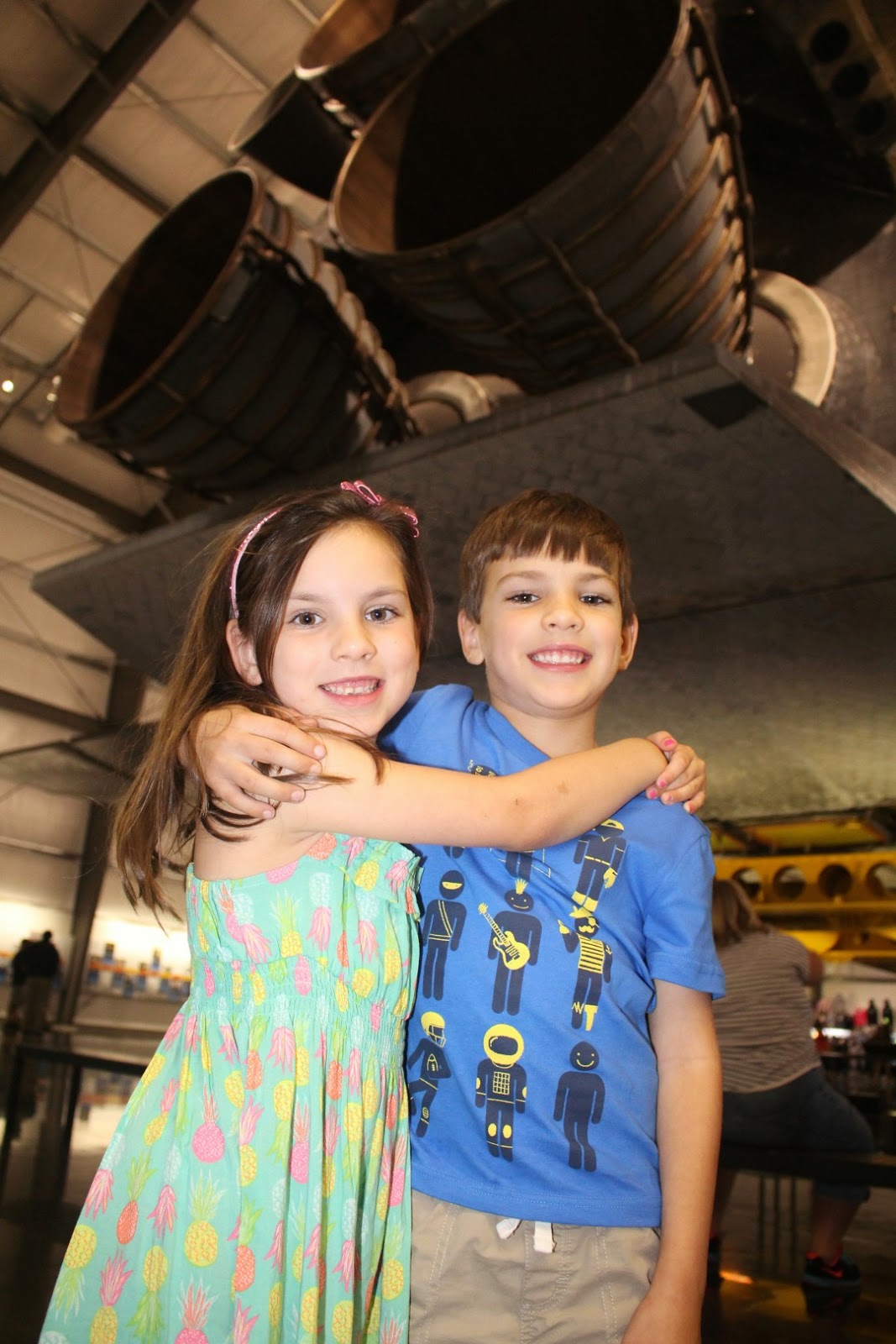 After the space exhibit we wandered through the rest of the science center.  Easton and Layla's school ended the year with learning about ocean life.  Because of that focus, Layla was jazzed about all the ocean exhibits.  this sea bass came right up to the window to see us. 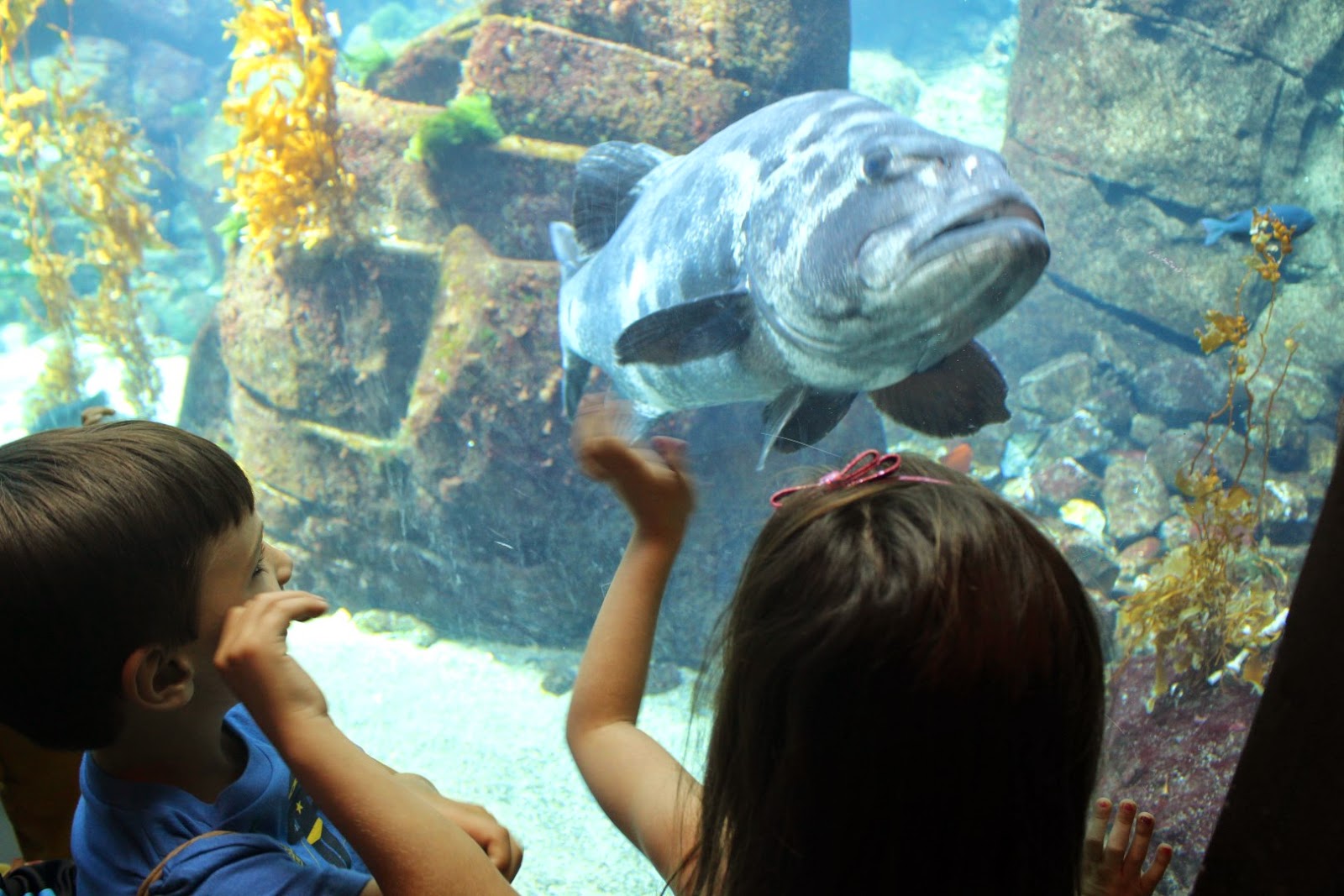 The tank full of touchable animals was Layla's highlight of the day.  She touched hermit crabs, anemone, sea cucumbers, and some other lively creatures. 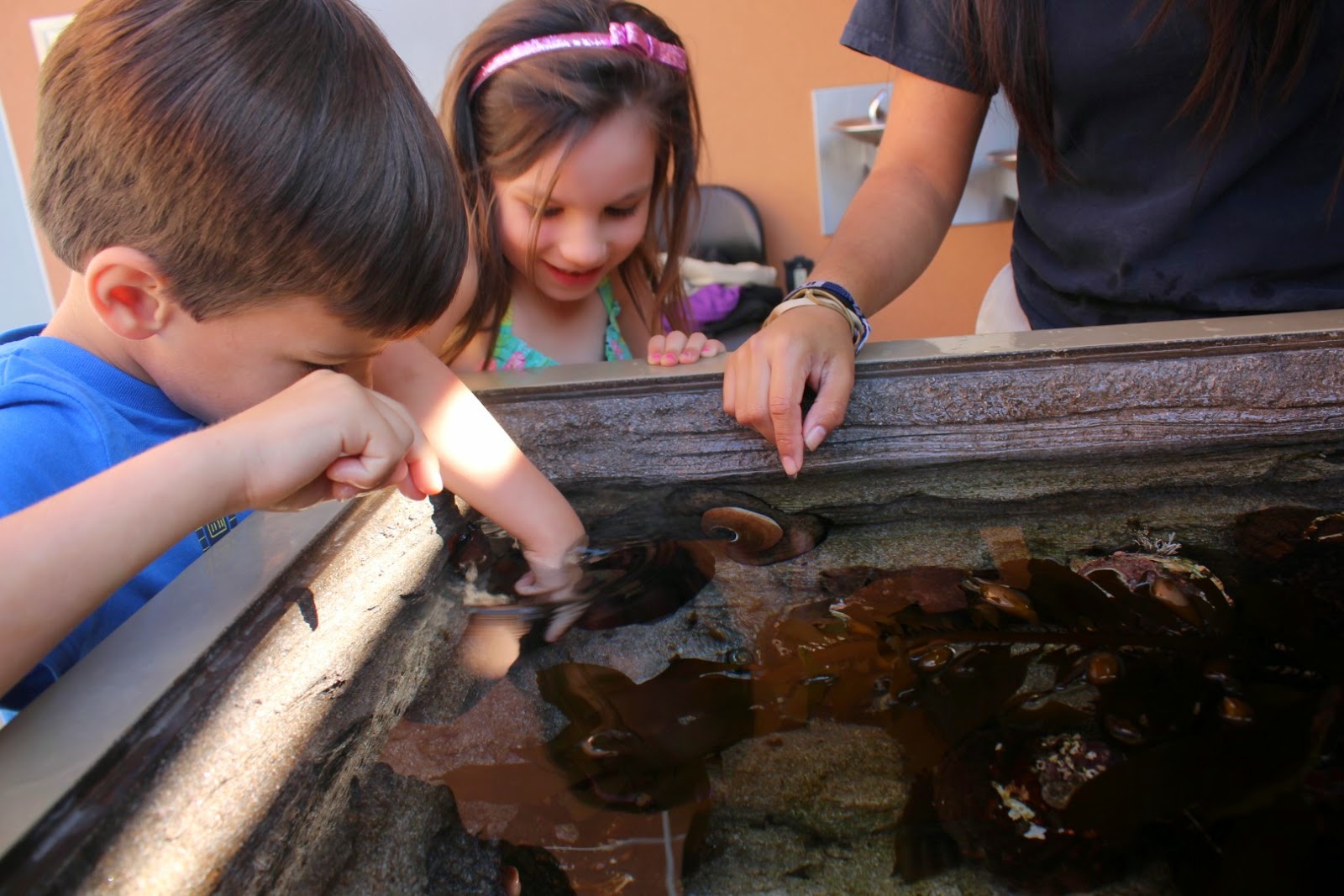 And of course, the starfish.  We spent several minutes watching the starfish slowly crawl around the tank.  easton asked, "what do you think they are thinking?" 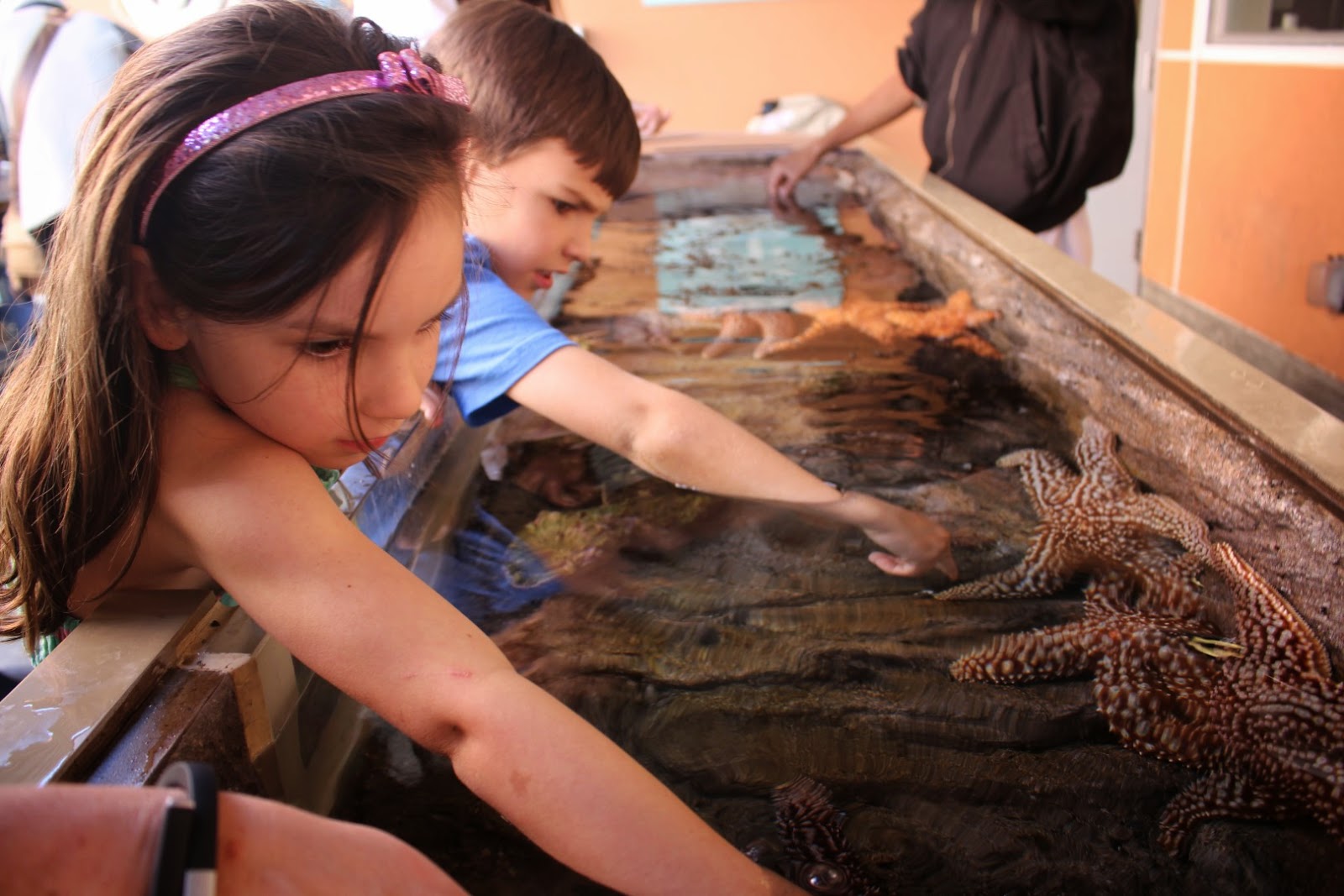 Easton's favorite animal was the shark seen here stalking us through the glass. 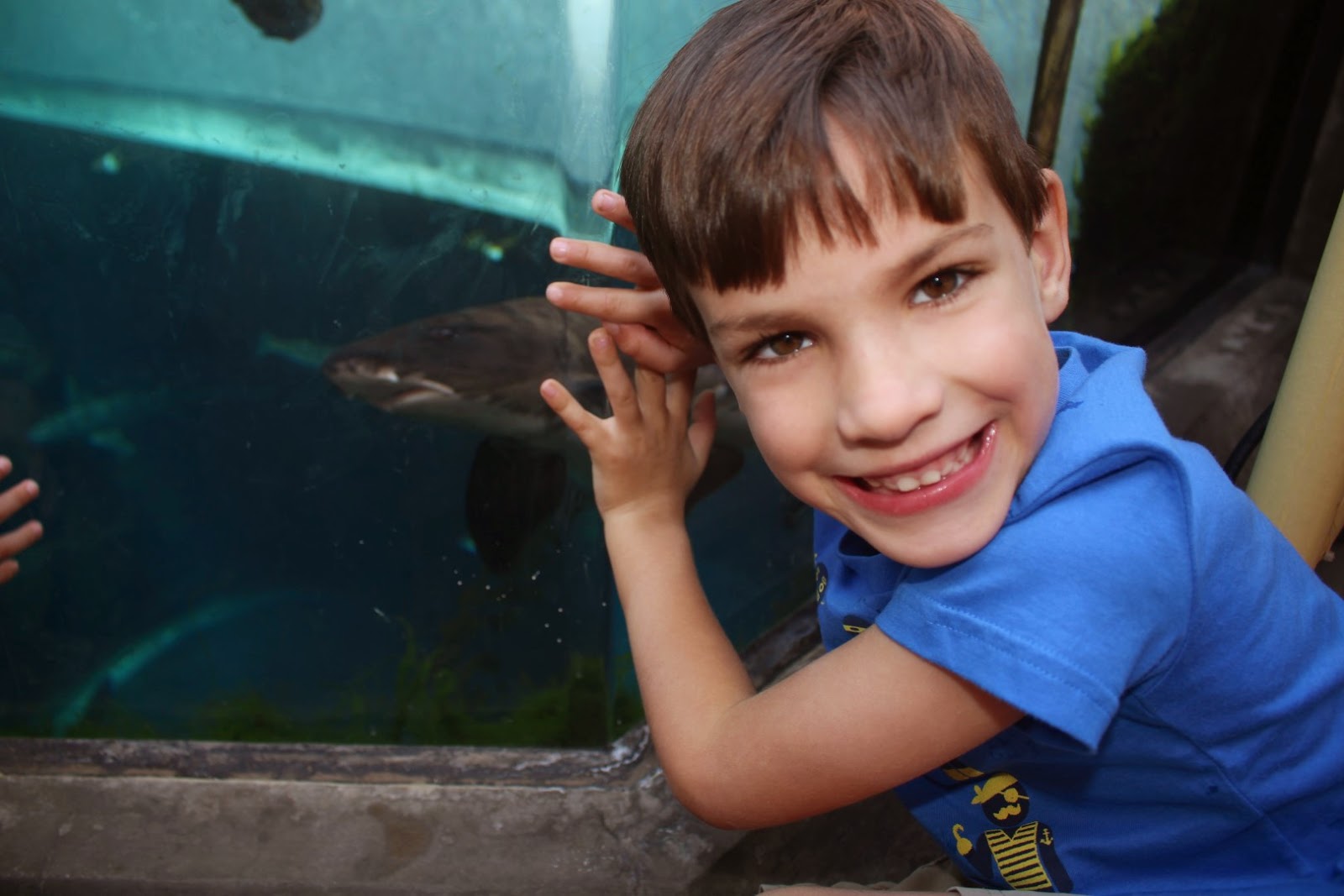 The space capsules encased in plastic allowed us to get up close and see a high level of detail.  These things fell through Earth's atmosphere at 2,000 mph and safely delivered astronauts home.  I have a new appreciation for those crazy men and women who strapped themselves to rockets and then crammed themselves into these tiny capsules to get home.  that's crazy. 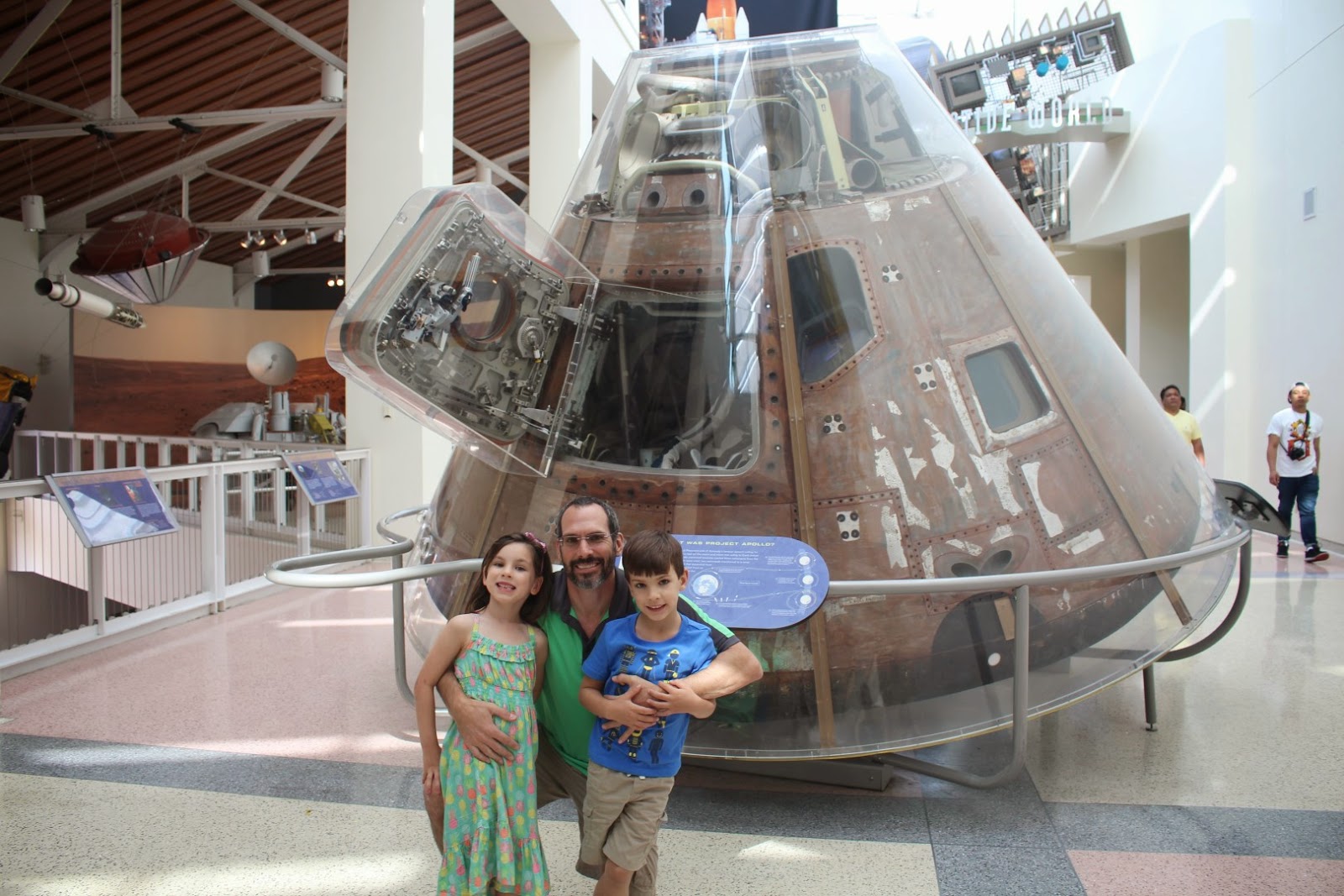 The viking lander caught Easton's attention because he is convinced he is going to Mars.  The Mars background is appealing to him for some reason.  Should I tell him he probably won't go Mars?  No!  I would never throw water on his dreams even if his odds of going are one in a billion.  I've thought about my responsibility as a parent and believe it is my job to help him get where he wants to go in life even if that destination is Mars.  Going to the moon is not what he dreams about.  That's already been done and he believes that is easy.  His sights are set a few million miles further...  Maybe he will go to Mars one day and maybe he won't but I would never want my words to discourage his ambitions. 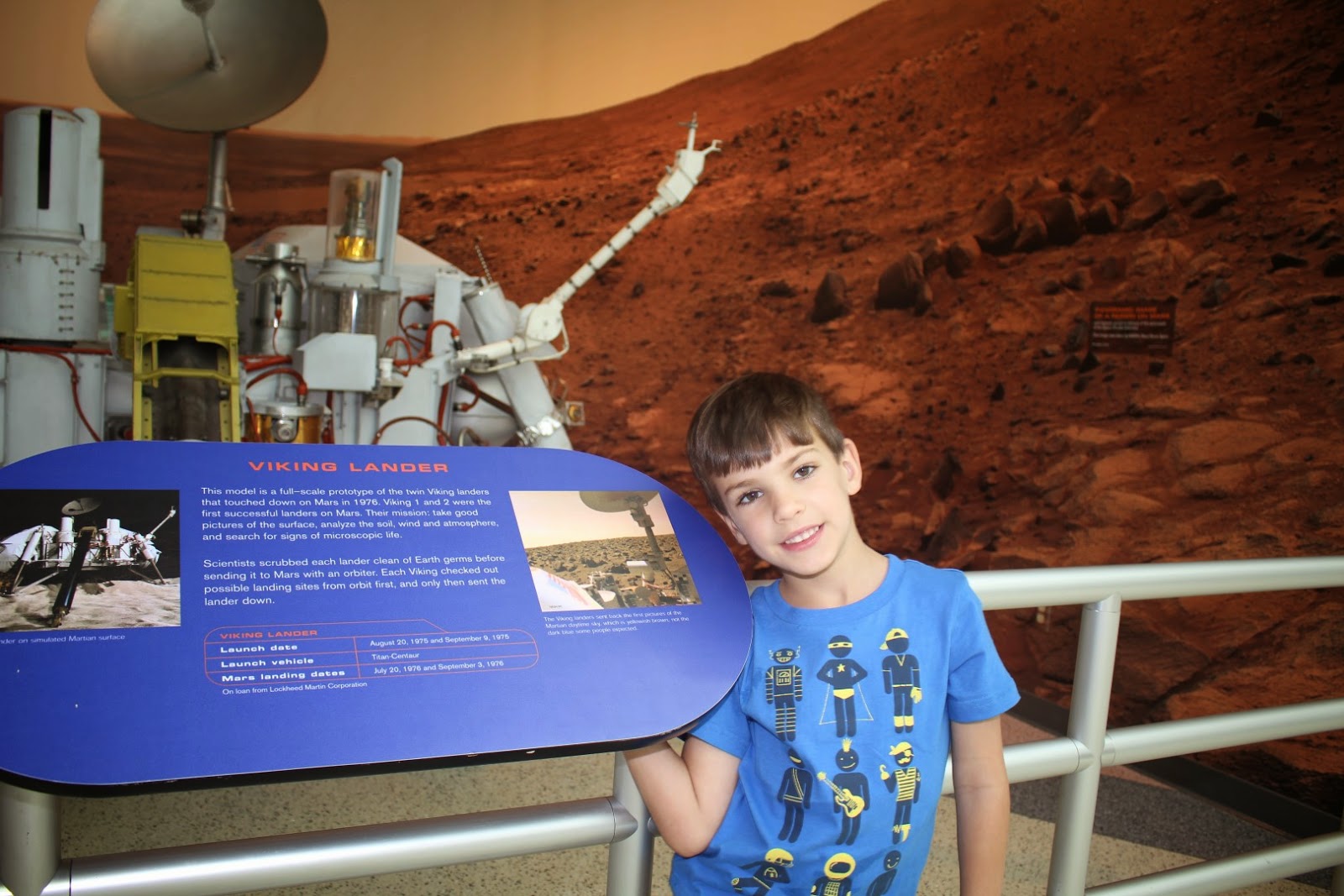 What an incredibly memorable and fantastic day!