Peace is restored to the kingdom.  Of all the pictures from my Daddy week with the twins, this one is my favorite of all.  See that white circle hovering over the airport? That is Kendra's phone responding with location information indicating she landed at the Phoenix airport.  Her anticipated arrival time of 6:20 PM was close... She was only late by FIVE hours.  Thanks, Southwest airlines.  Thanks a lot.  Her flight was cancelled, then she arrived in San Diego to find out she missed her connecting flight and then her next flight was delayed.  more drama, blah, blah and then...  She's home!

We are seriously limiting the twin's dessert times and sugar intake, but once in a while we splurge.  After eating healthy turkey sandwiches at Firehouse Subs (again this week) we walked next door to Culver's where Easton made a complete mess of his mint oreo ice cream cookie.  I'm considering this for his high school year book picture.  The chocolate smile... 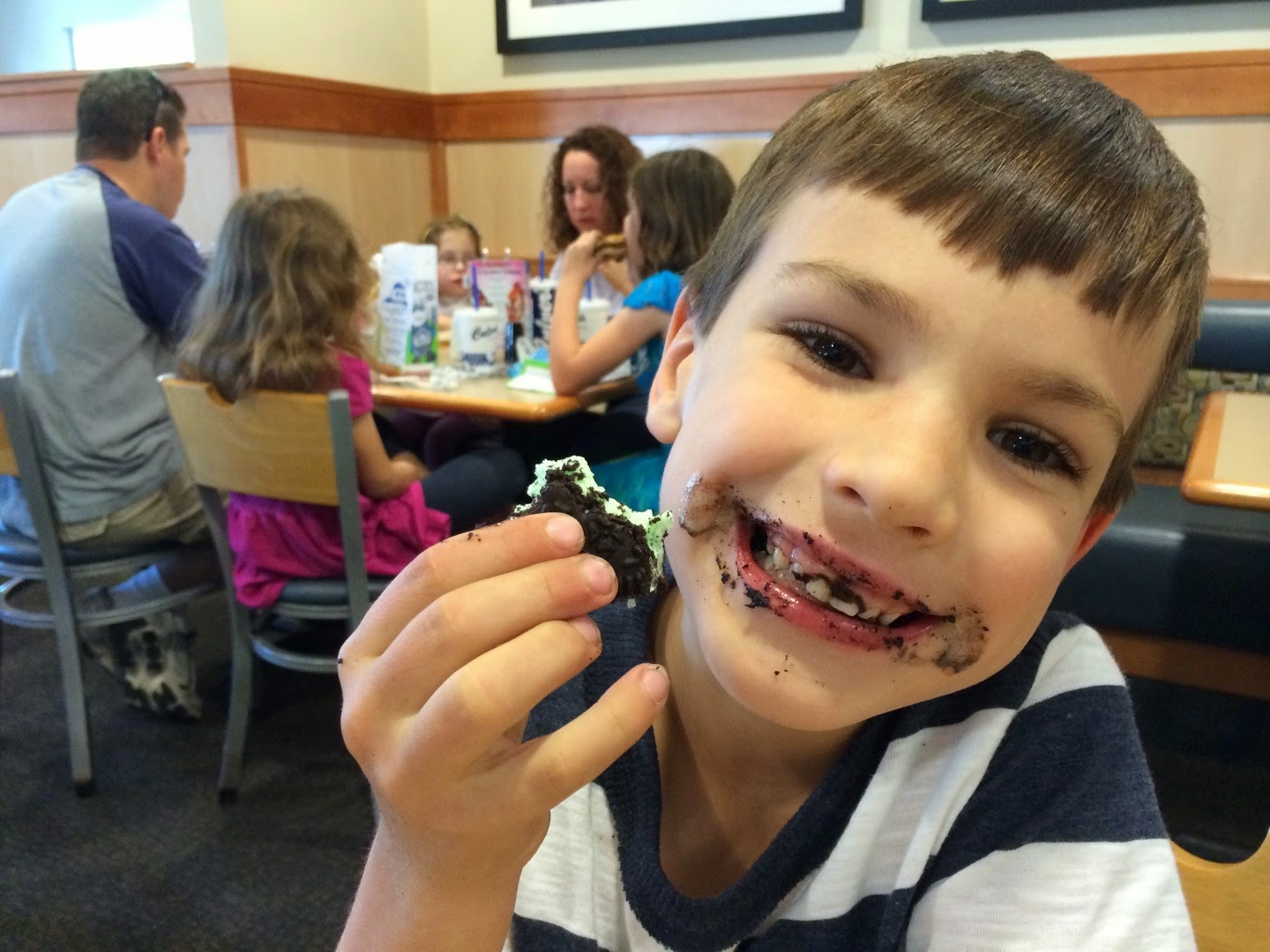 Before Kendra arrived home we had one last day of the "work and school" routine.  I picked them up and went straight to the library because I received an overdue notice.  Do you know how much a single day overdue is for 35 books?  $17.50.  Ouch.  I paid the fine and we headed off to the books. I said, "you can get whatever books you want as long as they fit in the book bag."  Layla went to the I Can Read book section and chose several level 2 books to fit her current reading level.  Easton walked past the kids section straight to the adult science section.  He came to me with this massive book about the universe and asked kindly if he can get it.  Why, yes.  Yes you can. 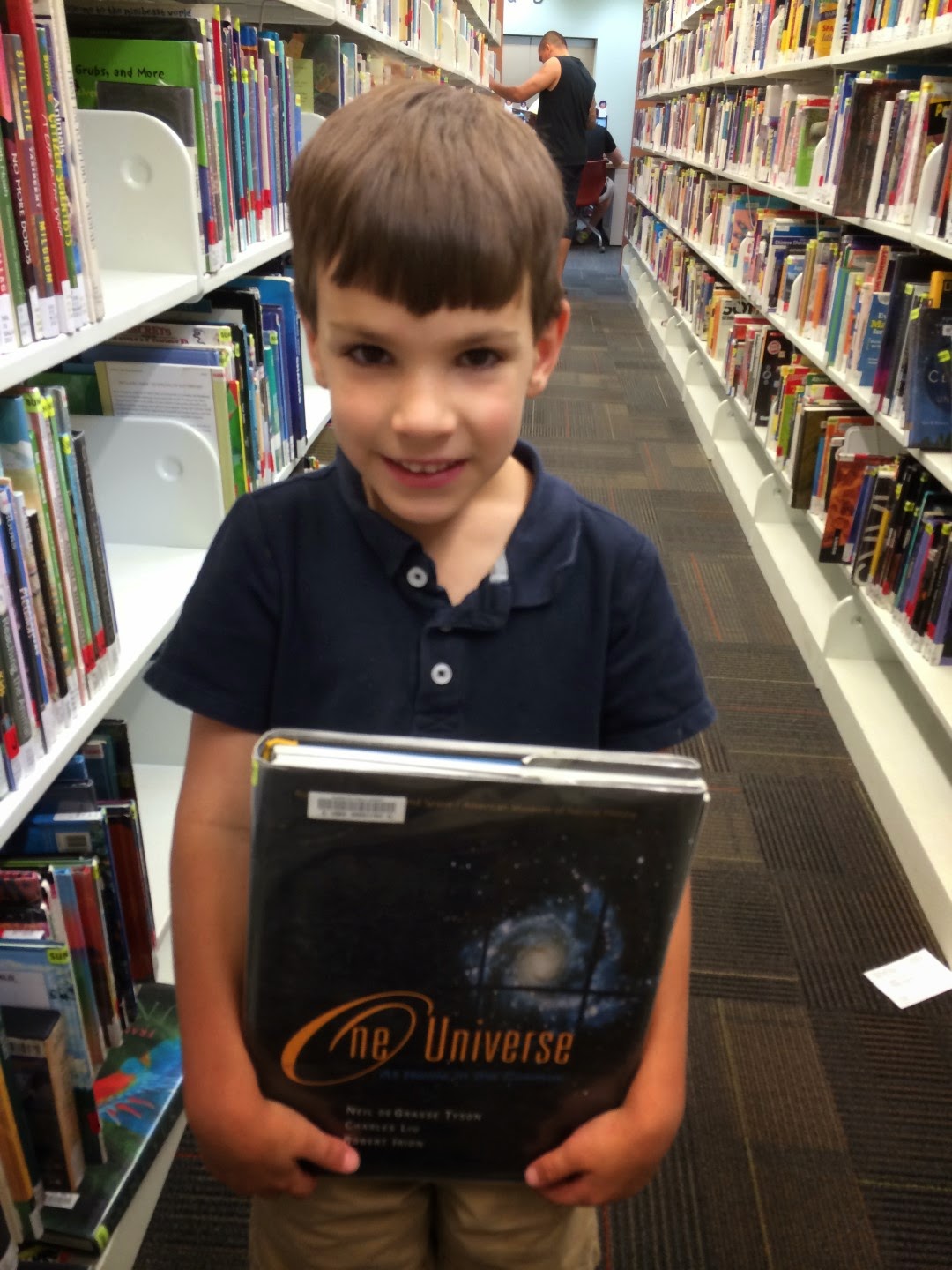 He also grabbed everything about planets he could get his hands on until I called it quits because the library bag was screaming at the seams for mercy.  On our way out the door Layla said, in a not-so-quiet voice, "why are people in the library so quiet?  This place could use some sunshine and dancing!"  people close by did their best to hold in the laughter, but I heard a few chuckles.

At home they did the bed time routine before dinner so we could have plenty of playtime all the way up until the last minute.  I allowed them to make dinner with me.  They came alive in the kitchen as chefs. 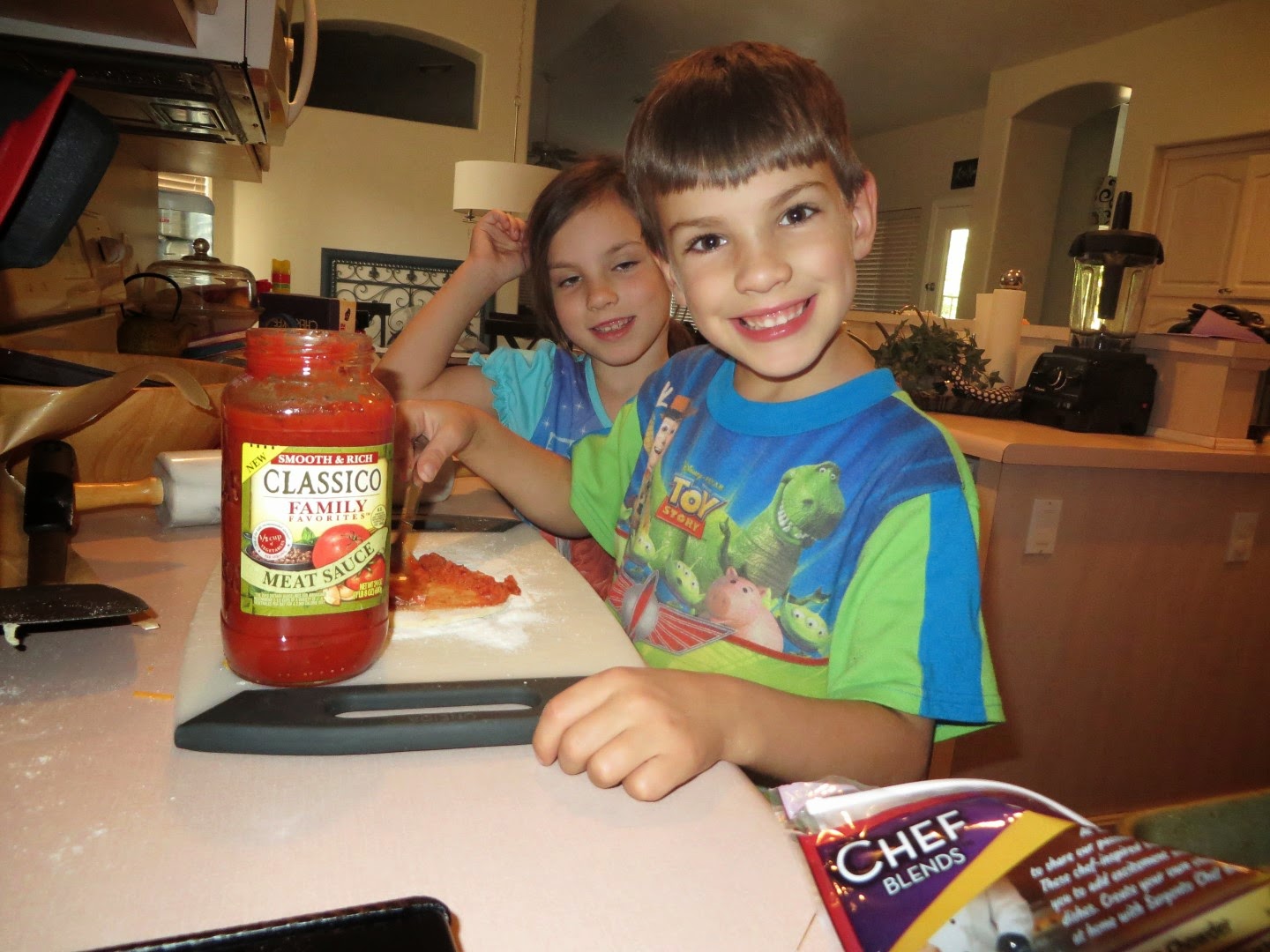 We made mini-pizzas from biscuits, pizza sauce, cheese, and pepperoni.  I even let them roll out their own dough. 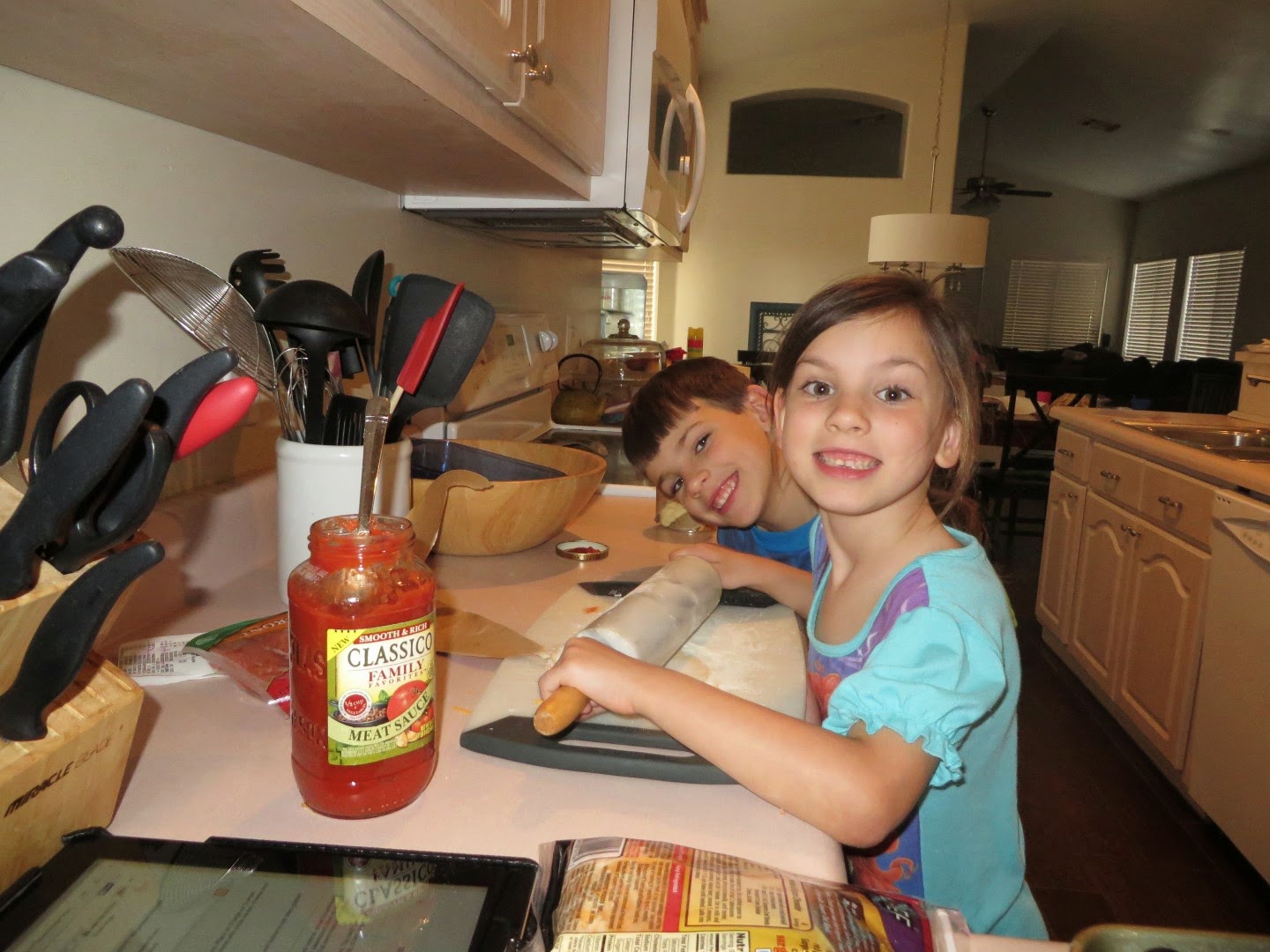 We learned that coconut flour is NOT the same as regular flour.  I also used too much of it so the pizzas were close to disgusting, but at least they were almost tolerable.  I took a picture of the three of us as we trashed the kitchen one last time before Kendra came home. 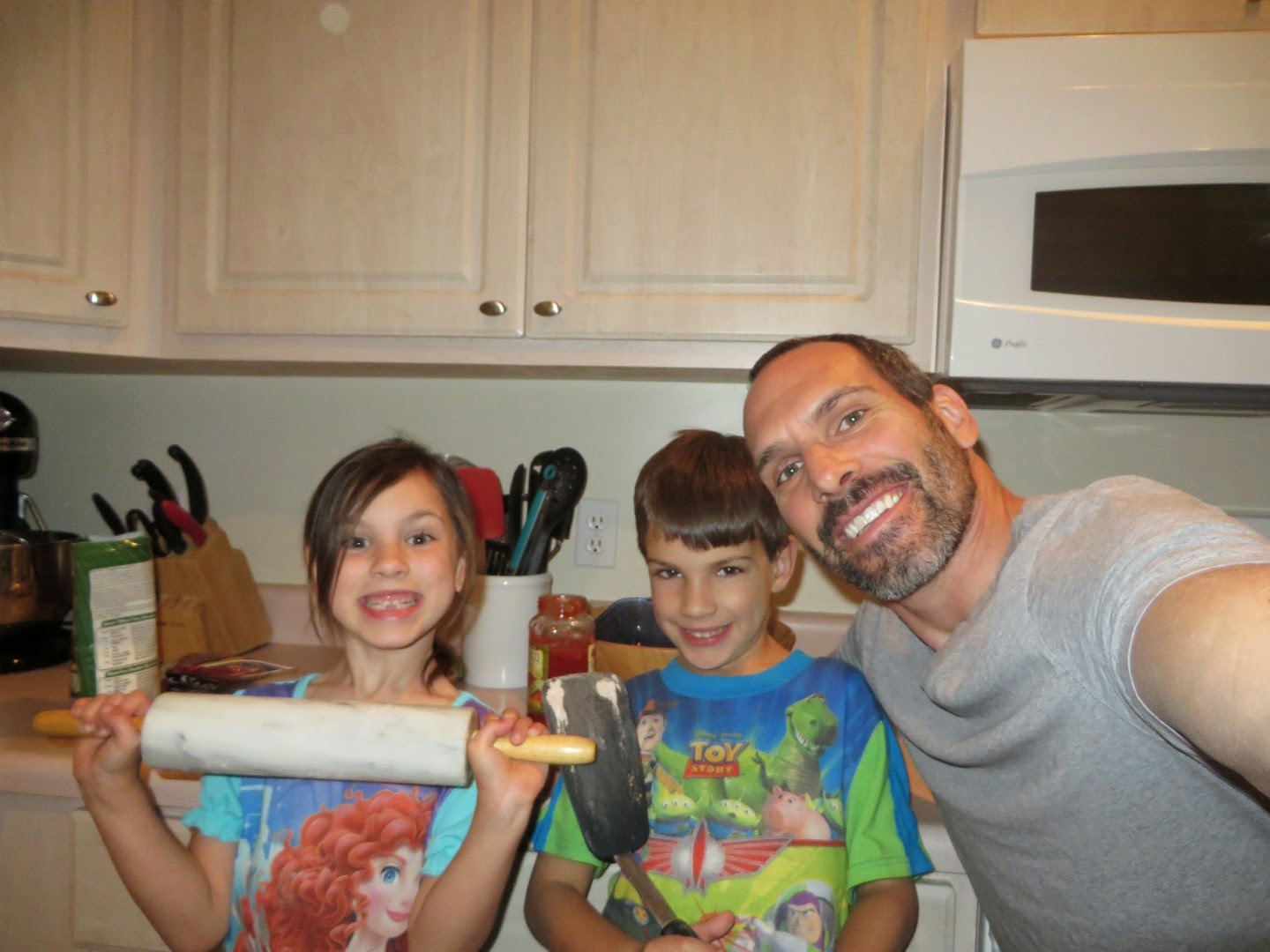 Overall the Daddy week was as successful as I'd hoped.  No lives were lost.  I wouldn't call it "epic", but we had many bonding moments together and lots of quality time doing normal day to day life.  They said they missed Mommy several times per day and I agreed.  I'm just as happy for Kendra to have the time away from the day to day as I am about the chance to have real one-on-two time with them.  Kendra was content with the cleanliness of the house even though the floors were a little crunchy and dirty.  She can never leave us for 7 days in a row again.  Just kidding.  kind of.