The last blog post contained a "before" picture of Layla's teeth.  She bravely strapped on a gas mask, received the shots, and allowed the dentist to yank out her two front teeth. 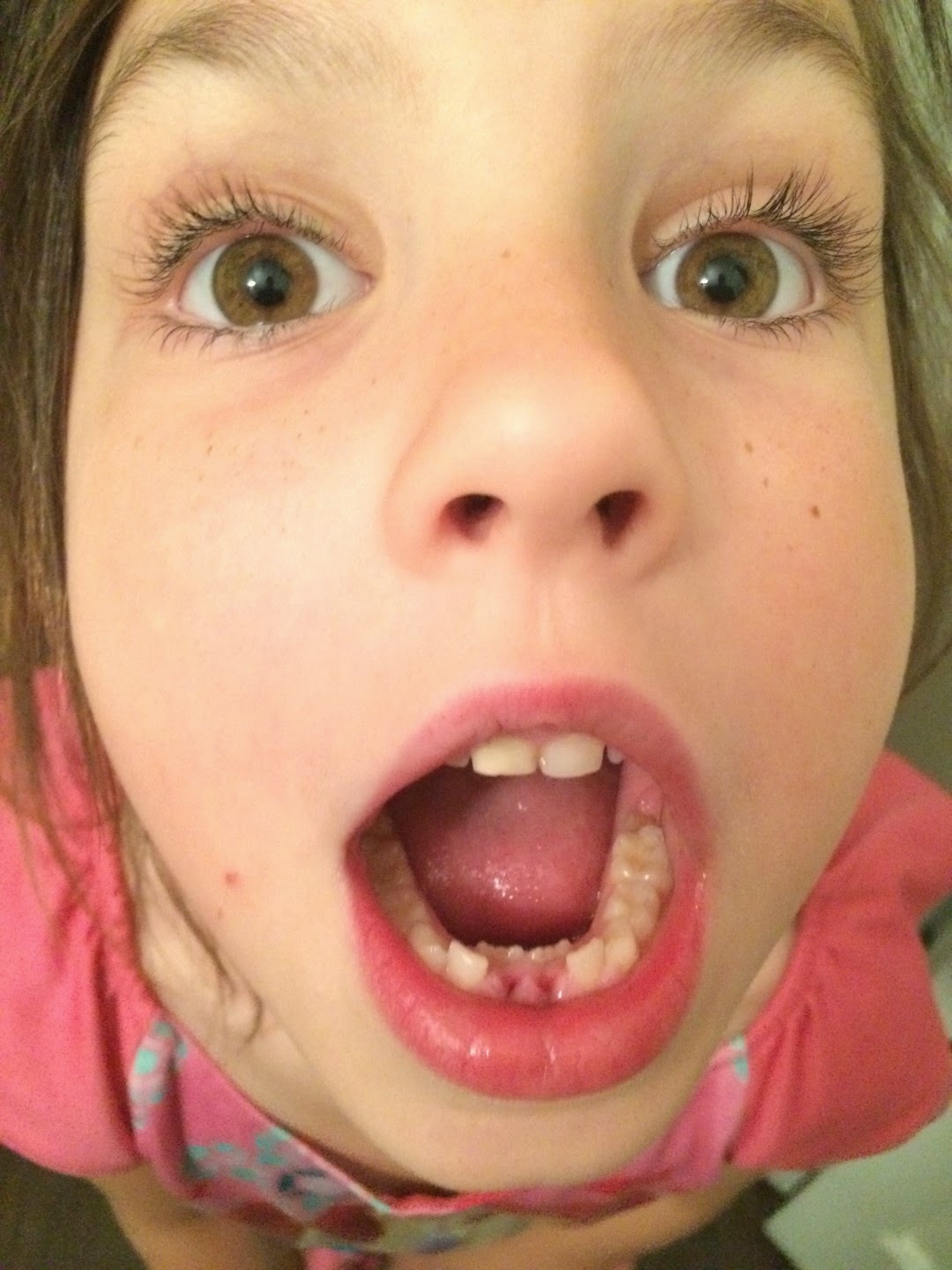 She was the happiest patient the dentist will see this week.  I'm sure of that because I've never heard of a person so excited to get their teeth pulled out.  She proudly showed me her two teeth in the tiny plastic container the dentist gave her. 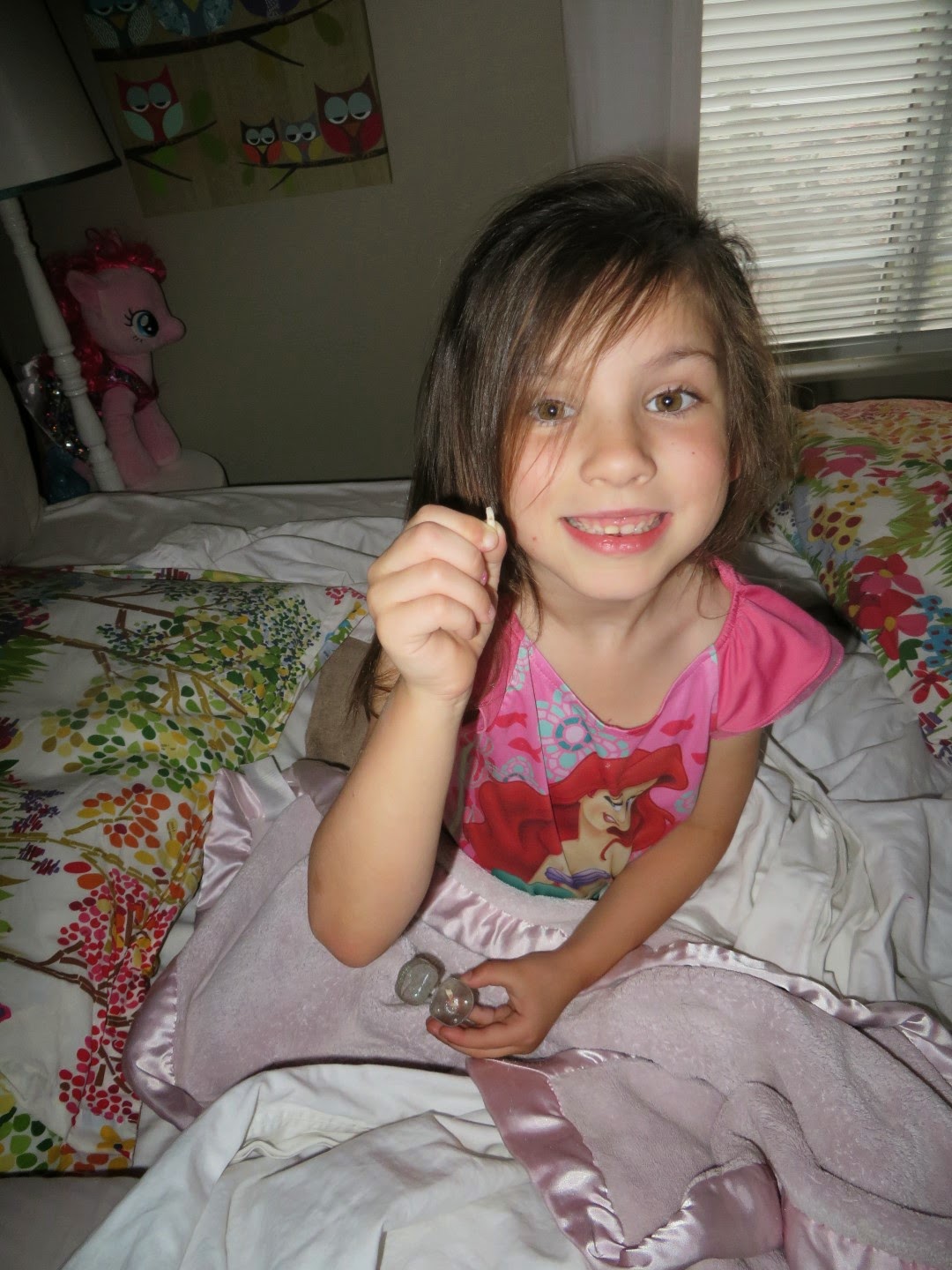 She placed the container under her pillow and woke up to find 4 dollar bills.  She said, "I know the tooth fairy doesn't exist.  You'll be the one to put the money under my pillow.  Maybe you can wear one of my tutus and fairy wings?"  I didn't agree to that, but I confirmed I am the tooth fairy who will pay her dearly for the teeth.  She put the dollars in her money containers (1 in give, then 1 in save, then 2 in spend).  My favorite part of this experience was her happy heart as she put the dollars into the correct containers in the correct order.  It's amazing what a child considers normal when parents role model, teach, and expect.

Easton had strep throat.  His quick spike in fever, sore throat, and lack of appetite resulted in a trip to the pediatrician.  They quickly diagnosed his strep throat and we immediately put him on meds.  Kendra and Layla both were tested and came back negative (hooray).  Kendra cooked homemade chicken noodle soup to help Easton feel better quicker.  He was so down and out that he didn't even want me to take a picture of him.  poor little guy.  24 hours later he was back to normal and the band played on. 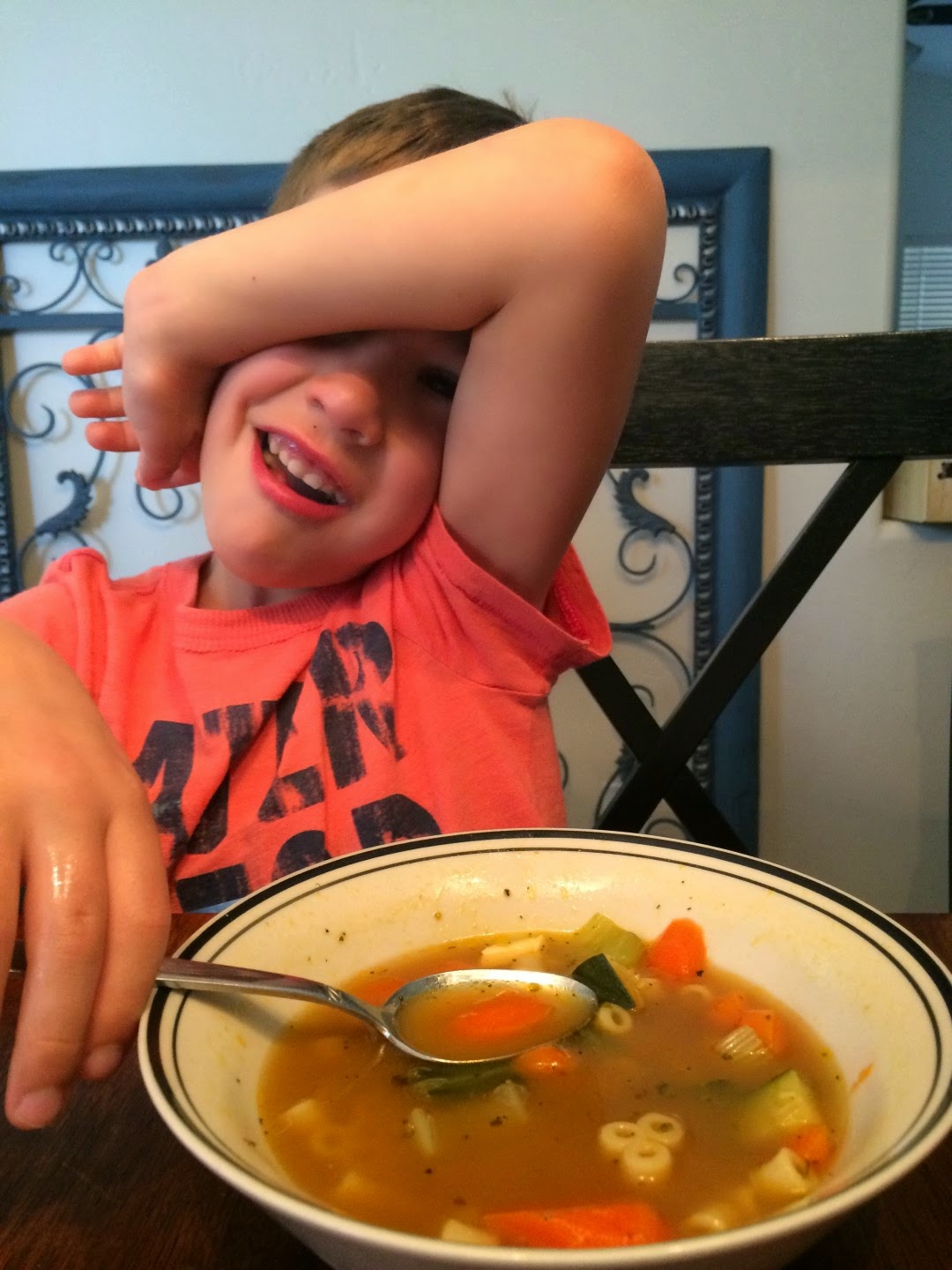 Kendra wanted the van to be cleaned so the 4 Webbs and Rebehka lined up our cars for an old fashioned car wash.  Kendra started in on the van and the twins asked "can i have a rag to help wash?"  Of course they can!  Just another example of whatever the parents do (take care of their vehicles) the kids are sure to follow.  I got that from my dad and gladly pass on the tradition of taking care of what we have. 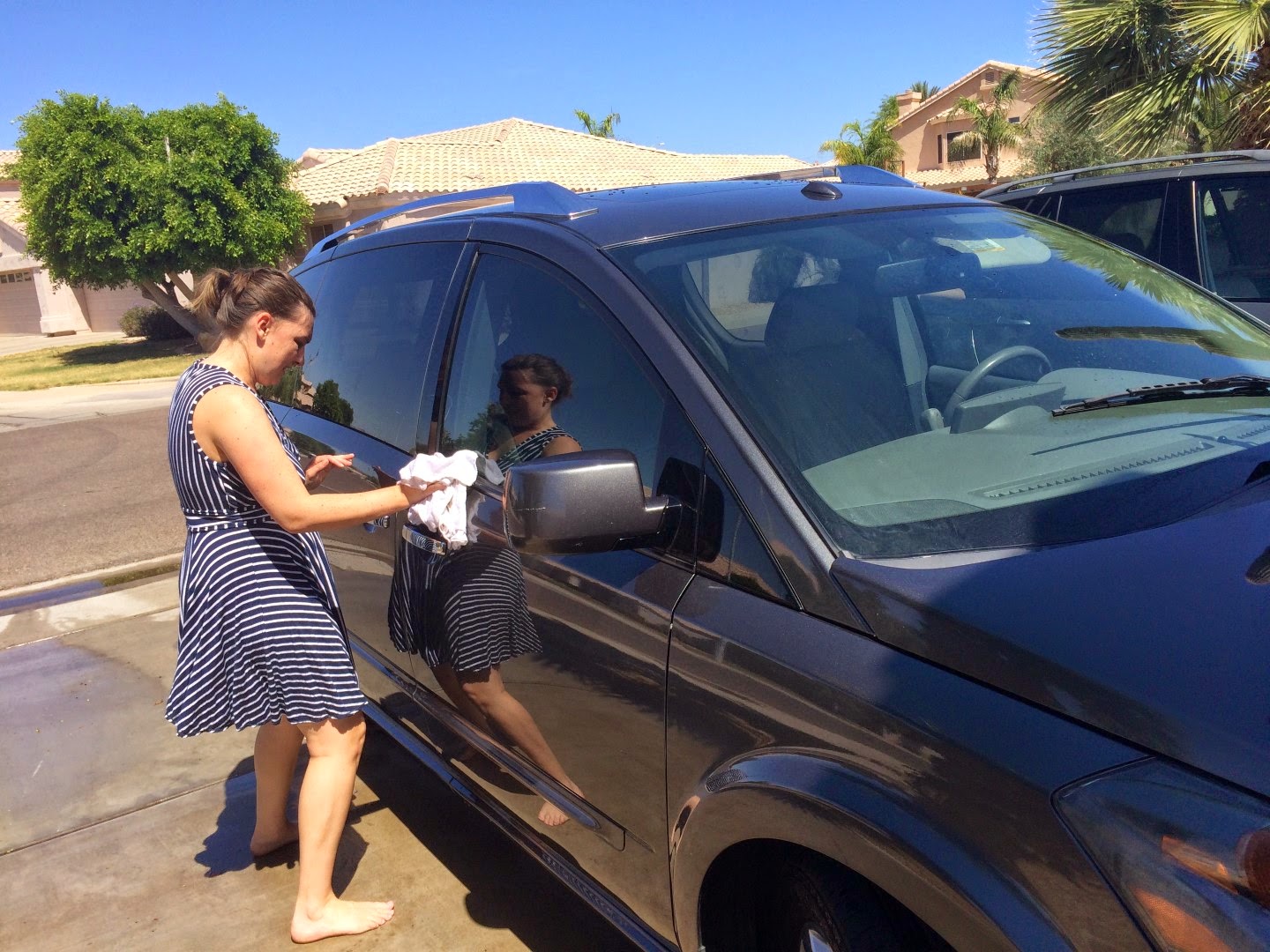 Our weekend roommate, Rebehka, joined the 4 Webbs.  Her car was dirty so she joined the cleaning bonanza.  After a few swipes with the soapy cloth she said, "I've never washed a car.  how do you do this?"   I was surprised someone could be 22 years old without ever washing a car.  Even so, I gladly jumped in with an explanation of the basics on how to wash a car.  Easton and Layla jumped in with their rags and scrubbed it clean. 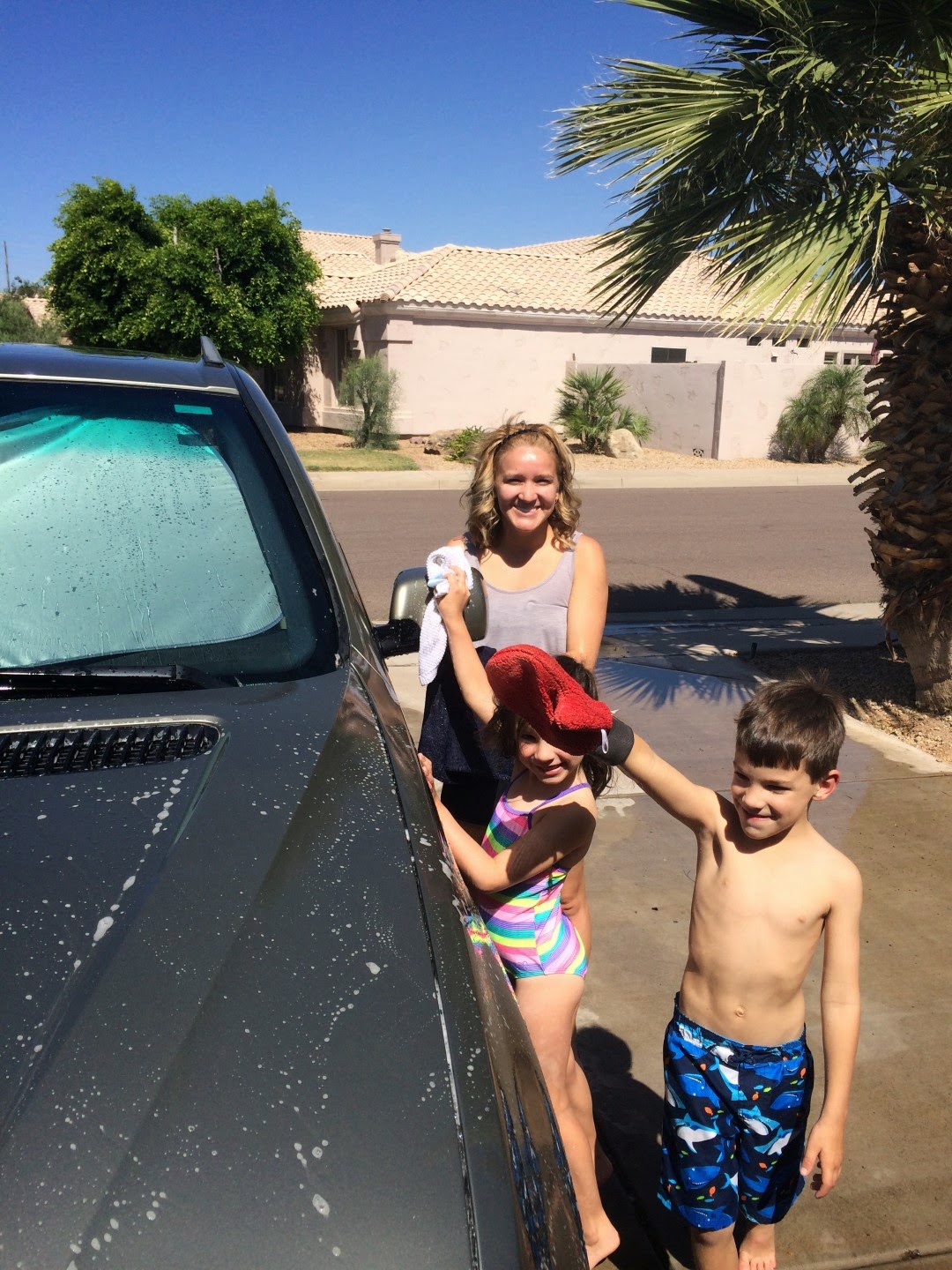 Not to be left out, they asked, "Can we clean our Y Bikes?"  "Yes! yes you can", I replied.  I smiled and proudly helped them scrub the dust off their vehicles.  I was proud to see the way they put into practice what we teach them.  Now, if only they'll do that with everything we role model... 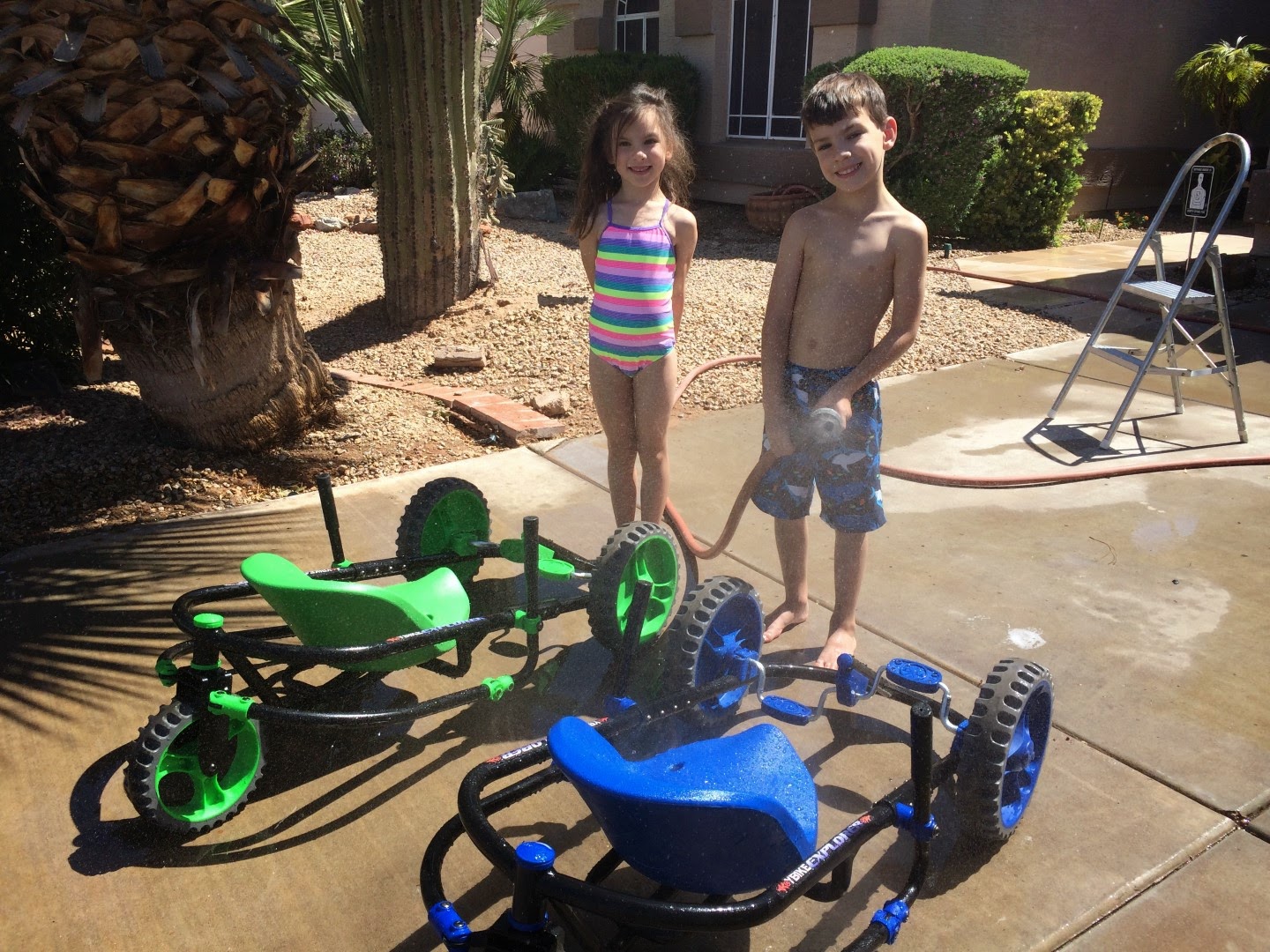 Layla's love for ice skating is growing even though her chances of continuing through the summer are shrinking.  I drove the twins over to Gilbert for Layla's lesson where she is blooming into an ice dancer before my eyes.  After the lesson was over we stayed another hour because she kept on skating and begging for more ice time. 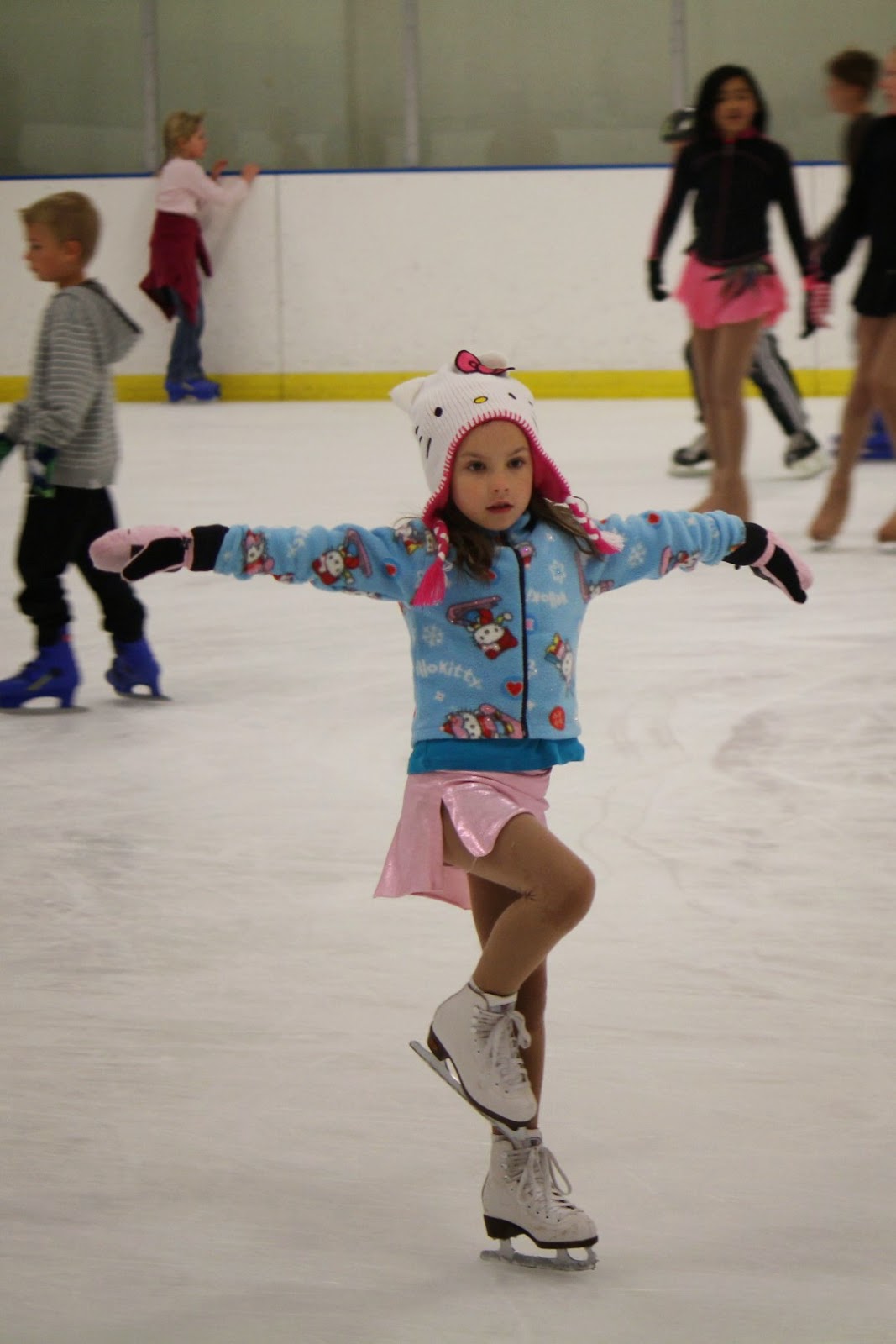 Her balance and strength are working to her advantage.  All it takes is a little practice!  Easton spent this time working on his photography skills.  I sat him on the wall separating the hockey team's bench from the ice.  He used my camera and we played with the settings to capture these pictures.  This one below was taken by Easton.  It was trickier than it may appear because the mob of people flowing past made it a real hole-in-one to take a clean picture as she passed by. 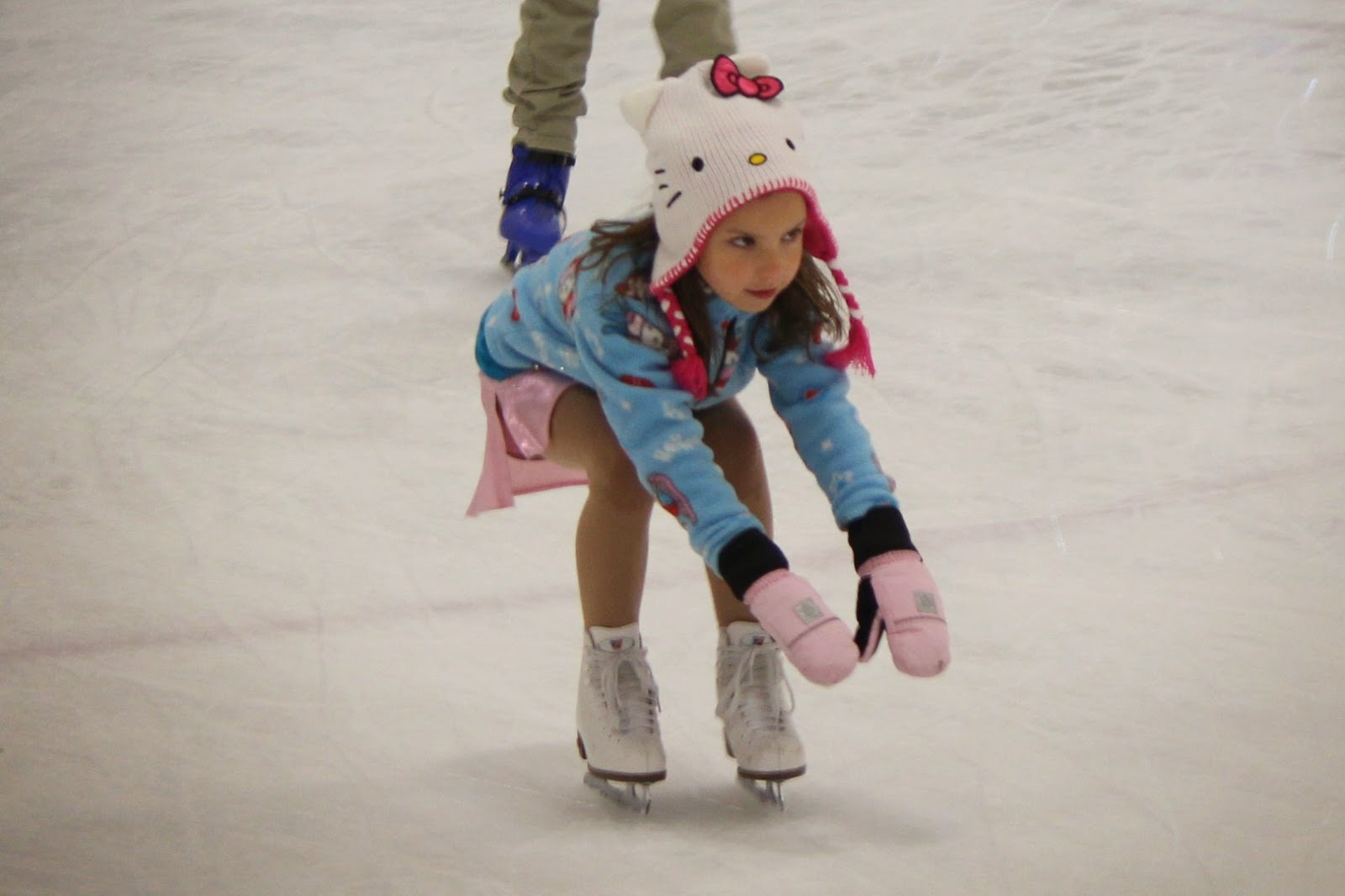 Saturdays are crowded with people.  It is the other end of the extreme spectrum from when we were virtually alone in the building at the Chandler facility.  We took a little break as the Zamboni machine cleaned up the mess.  Easton wants to drive one.  Big surprise there. 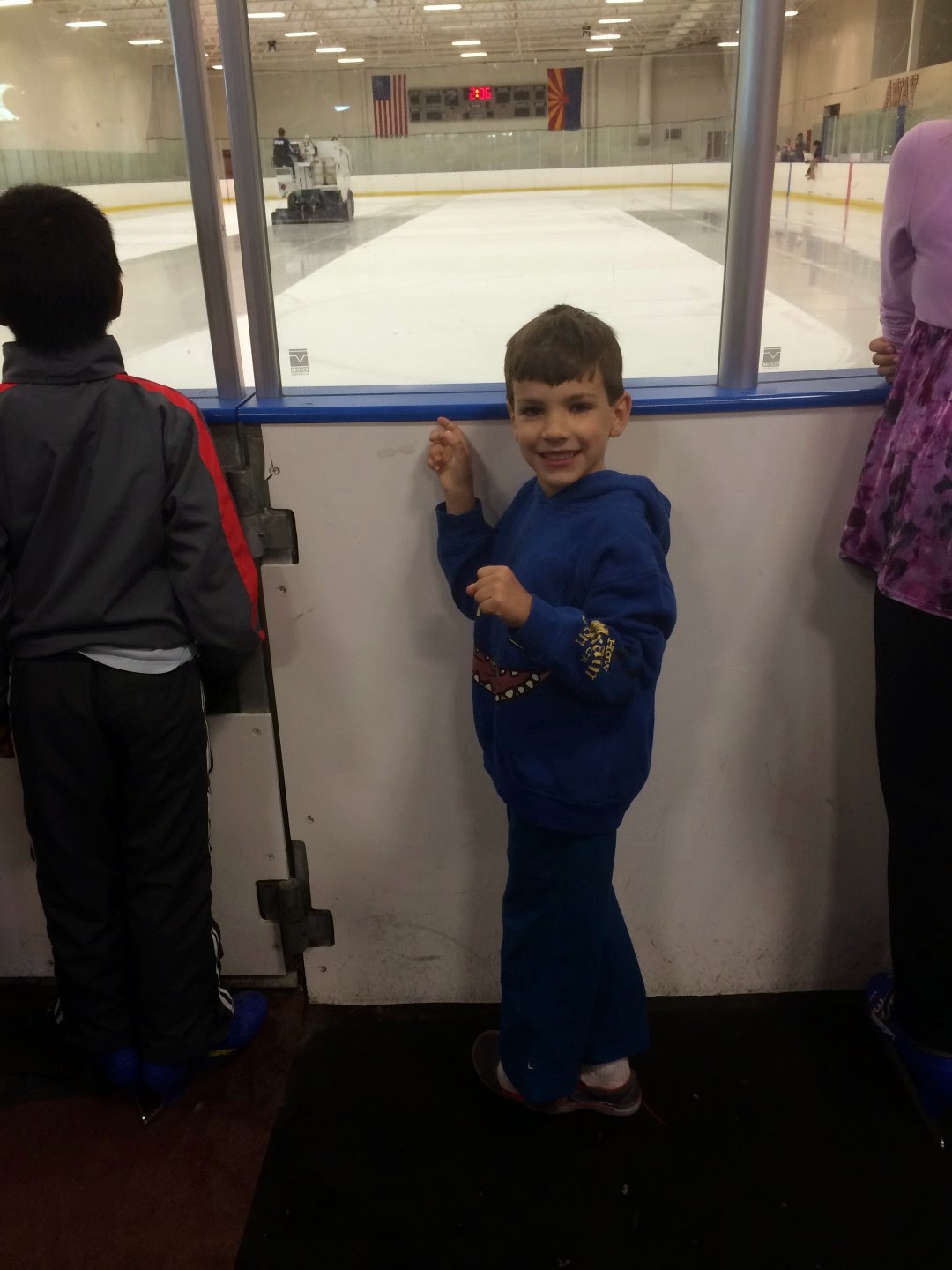 Another spontaneous thing we did was costume dinner night.  About once per month I declare costume night where we eat dinner together in character.  We scramble to find what princess or superhero we'd like to be for the evening.  Easton and I are both Spiderman.  Layla is princess Aurora.  Kendra didn't participate because she doesn't have any costumes.  Mother's Day and her birthday are coming!  I foresee costumes in her future... 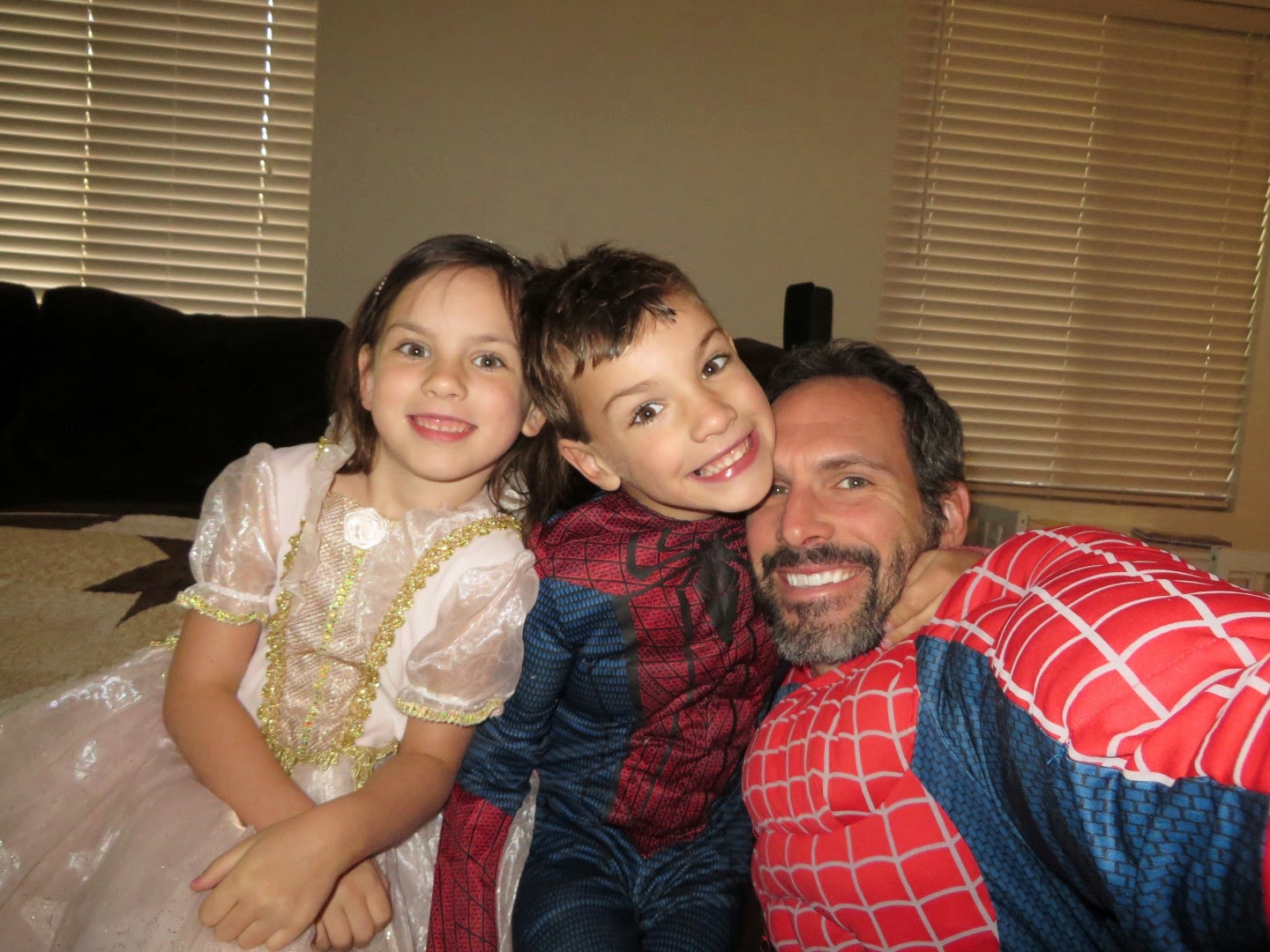 We cranked up the music and danced the night away after dinner. 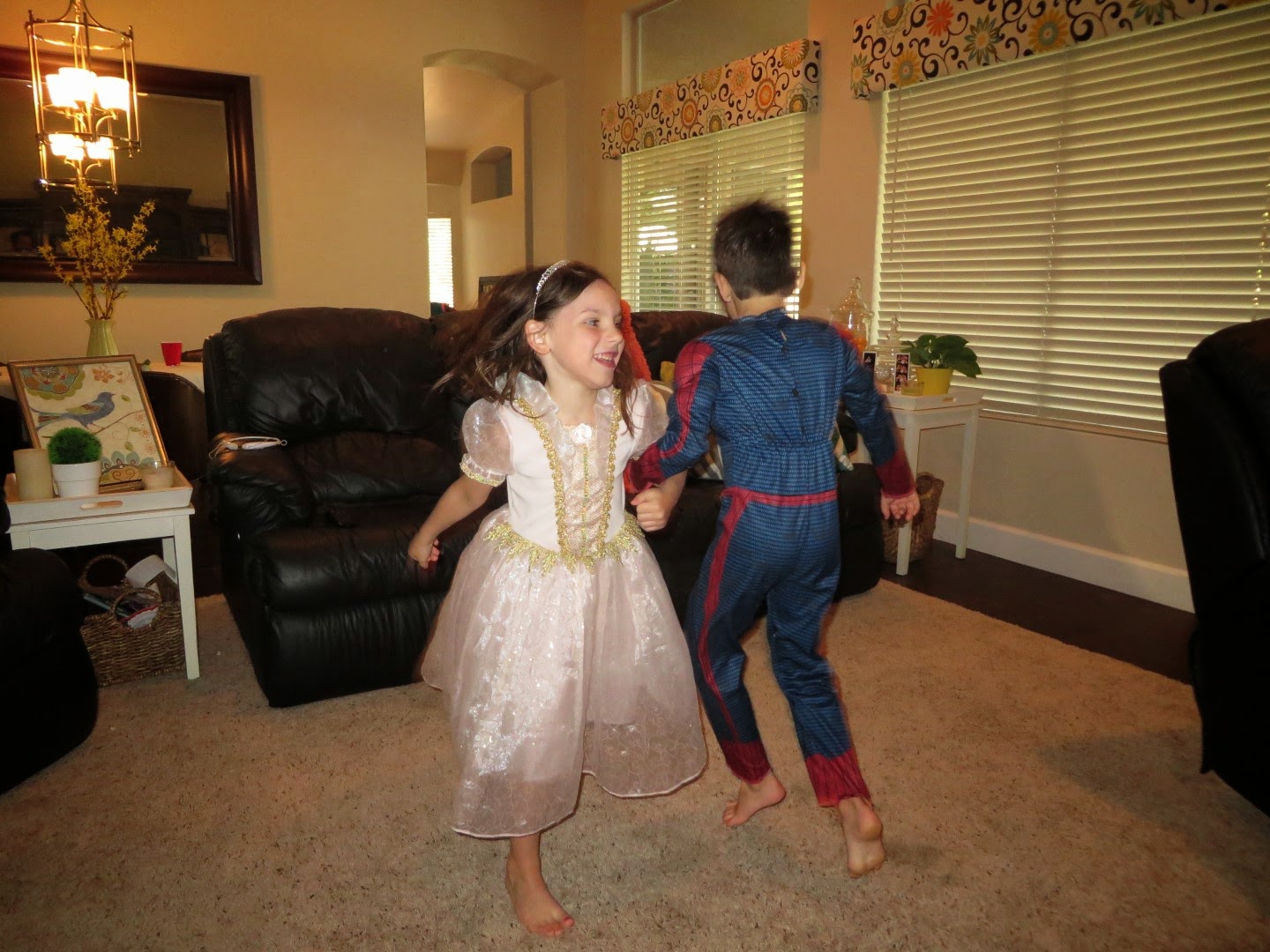 You'd be surprised how much happiness can be expressed by just dancing around and being silly in costumes. 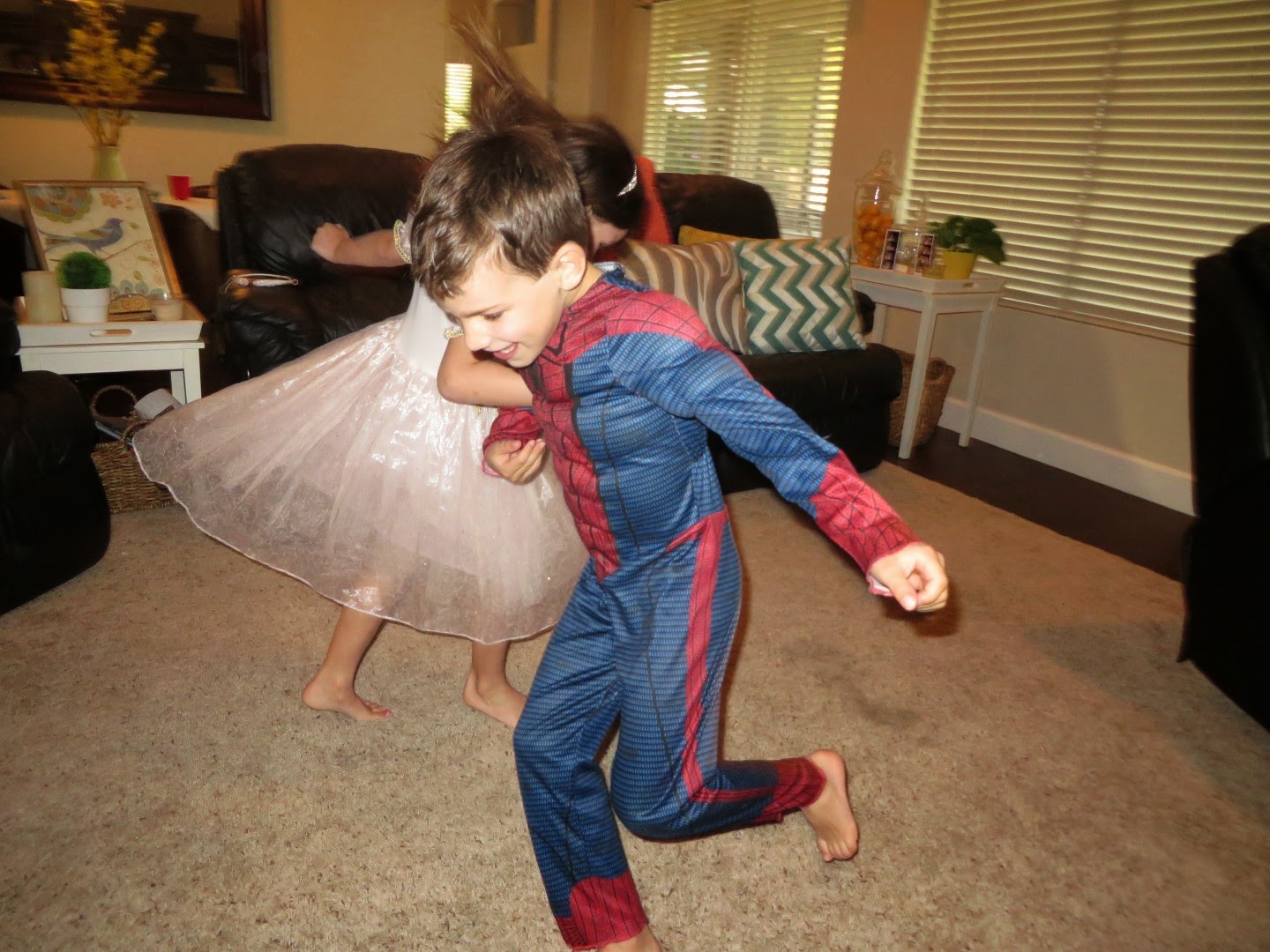 Saturday was a Daddy day because Kendra had several social and ministry gatherings.  The twins and I were at home with an hour to kill so we did one of the things I've always wanted to do.  We made a volcano.  I used a paper plate, a shot glass, tin foil, and a big cooking sheet to catch the mess.  I didn't go the extra step to use food coloring so that the eruption is lava red.  I didn't know how big of a mess it would make.  We'll try the food dye next time. 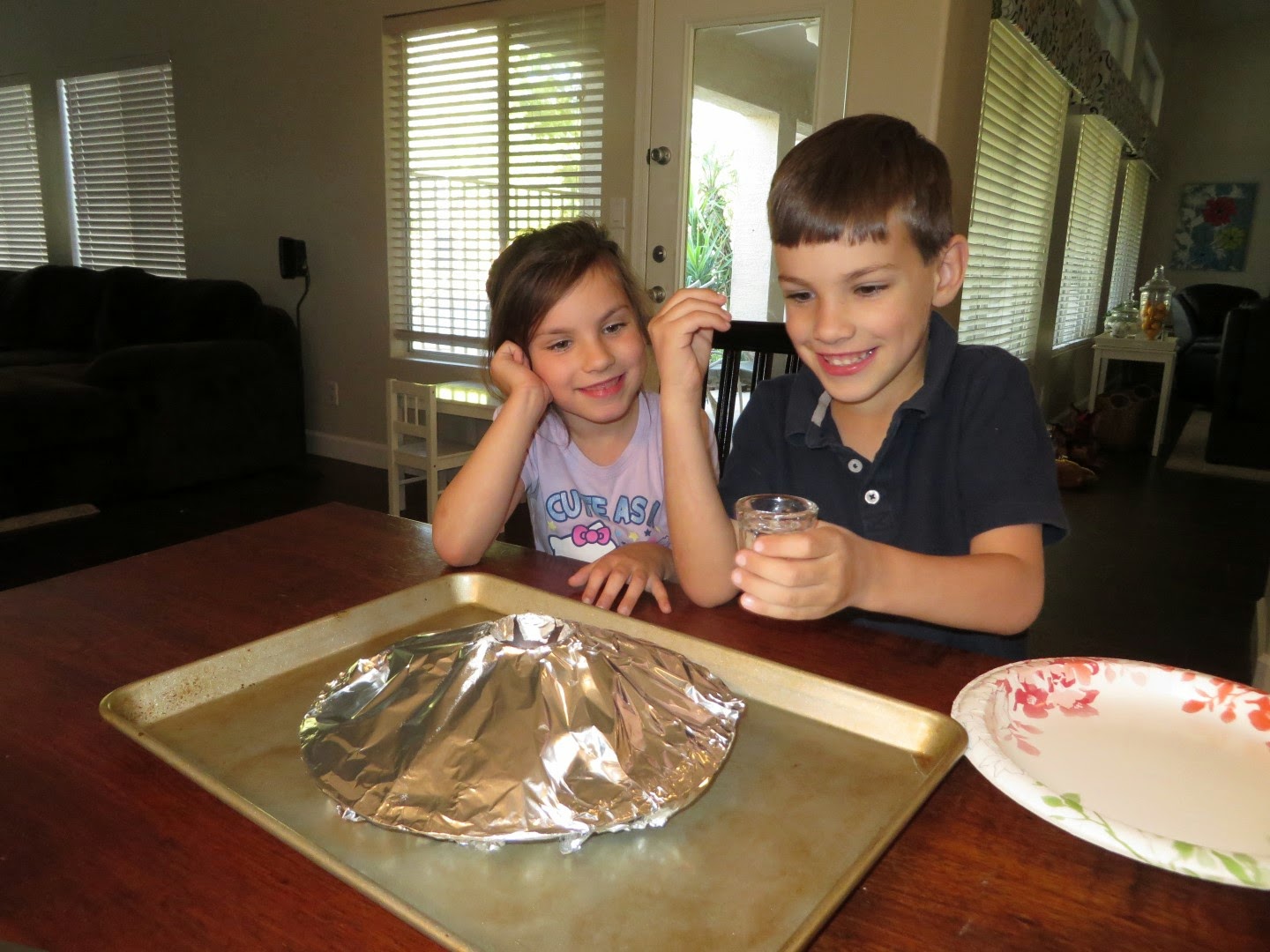 Then we spent another 20 minutes or so debriefing about chemical reactions and hypothesizing about other experiments.  I've created science monsters!  Hopefully this will continue through their schooling.  Here's a video clip of the experiment.  More than anything it shows Easton's personality.  It's not all that thrilling, but to a six-year-old it was magnificent.


Kendra leaves on Tuesday for 7 days.  That's right.  The longest I've ever been alone with the kids and the house.  I'm not scared or worried.  It's just a lot of extra effort to juggle work and kids and house.  I always have a deeper appreciation for single parents after going through something like this.  The truth is, I'll miss her very much and don't want to be away from her for this long.  I'm looking forward to Daddy Week!

see you soon
Posted by The Four Webbs at 9:03 PM