The vacation in Sacramento continues as I go to work during the days and the rest of the family relishes the last bits of summer fun.  Everybody knows what starting school means except Layla and Easton.  They have no idea or way to comprehend the incredible change coming their way in just a few short weeks.  Their first day of school will be the beginning of a 18 year (or so) journey towards being educated.

I wrote about divergent thinking some time ago, but have not come up with any ways of directing Easton and Layla's path away from the inevitable "down side" of current education methods.

As sad as I am to write it, there is no way I can guide the twins to improve their divergent thinking while at the same time succeeding in today's educational system and tomorrows workplace.  Our country simply doesn't value divergent thinkers.  as long as that is true, then they will never make a living doing those things which require the skill set.  I hope I'm wrong about a few things I see coming in the future and this is one of them.  I hope I'm wrong that our nation is cranking out zombified convergent thinkers who believe the goal is to all reach the same conclusion for the problems they will face.

We can instill in them a sense of responsibility, character, integrity, morals, consideration, and such.  So that's what we do.  The twins are old enough to take care of their own morning routine and that includes making their own bed, every morning.  Here's Easton showing off his skill without being told!  Yes, it IS possible to set expectation high enough to be challenging, yet realistic.  "Make your bed" is one of those.  The only issue with developing this skill is that they expect US to make our bed too.  Such observant children... 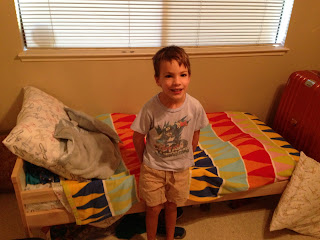 I haven't given up hope on parenting or education or teaching, just the idea of attempting to maintain their divergent thinking muscles in the midst of public educations daily attempts to squash them.

An example of our continued focus on education is Vacation Bible School.  The most important aspect is teaching them about who God is so they know who they are in Him.  Nothing will help them through life more than this relatively simple understanding.  If God is love and they know God, then they know love.  It really is that simple.

Kendra took a few pictures on the way out the door.  I was already at work this morning so I'm putting a few different ones up here because I liked them so much.  Each day I would come home to a double-dose earful of how great VBS was.  I know Easton's expression was not descriptive of how he feels about VBS. 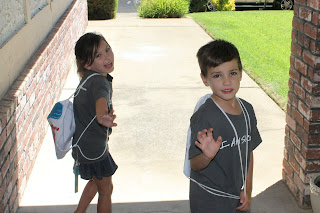 This next one is more like their personalities though.  Layla busting a dance move and Easton holding nice and still for the camera. 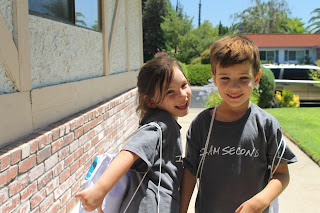 Easton is stepping into the big brother role more each day.  I vow to never make him feel responsible for Layla's well-being.  It's not right to put anyone on a child's shoulders as a burden to be responsible for them.  As their Dad I am responsible.  however, when they are away from us at school where Daddy isn't allowed then they know to take care of each other as best they can.  I told Easton he is expected to help Layla and be there for her when she needs him.  he can certainly do that. 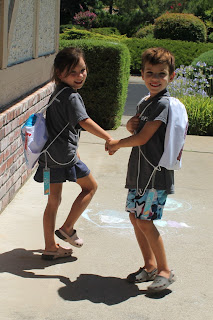 The last week was my first full week of work.  Every day at the job then every evening spent working out or spending time with friends and family until 11:00.  Saturday morning arrived and I was super tired.  Guess who wasn't?  Yep, Easton the early riser.  that's probably his Native American name, "he who rises early" or something like that.  Anyway, I woke up when he did and we snuck out of the house for breakfast so the rest of the family could sleep in.

We agreed on the Waffle Barn and had a fun time hanging out together.  I took some pictures and he was intent on taking some silly ones because lately I've given them the freedom to take happy pictures and then a few silly ones.  We smashed our faces together and this was the first time I felt him push back.  on anything.  He's been very docile his whole life, shying away from conflict and avoiding all confrontation.  I don't rough him up at all.  ever.  but we do "rough house" with wrestling around and playing tag.

This day was different.  As we were face to face I made a little bear growl noise and pushed against him.  He strengthened his neck and growled back at him!  We were giggling and growling and pushing our foreheads with a tug-of-war effect.  I snapped this picture. 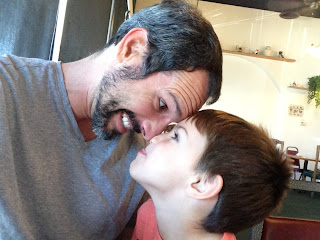 Then realized the other two families in our section of the restaurant were smiling watching our friendly (loud) banter.  I've been waiting for this stage in his life to toughen him up through teaching him to engage without running away.  He'll never be a violent person because he has such a loving heart, but I want him to confidently know he doesn't have to be afraid of anything or anyone.

Our trip this year to Sacramento amounts to several weeks worth of time spent here.  We usually shoot for at least one evening out with Neill and Jenny, two of our most valued mentors.  Their daughter, Aimee, watched the twins while we went with them and our parents for a dinner evening out.

As soon as she came in the door they went straight for the books and the then the chair.  Aimee is such a good sport and gladly cared for them while we went out on the town. 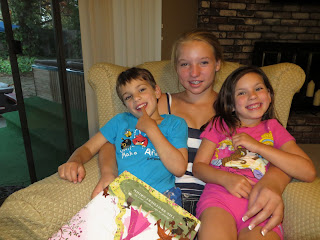 by "on the town" I mean up the hill to El Dorado Hills.  Kendra found a highly acclaimed restaurant called Sellands where we tried gourmet dishes and conversed about life, love, and serving others.  We always take their gift of time with us very seriously because we realize how sparse it is and how thinly spread they are between traveling and teaching here at home.  I'm most thankful for how they believe in us as worthwhile to input  into our lives.  I know they see our potential and desire to help others. 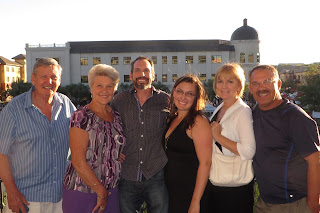 The weekend was a blur, and I still haven't made it to bed before 11:30 one time this week because we were too busy having fun.  Lots of pictures to sort and stories to tell even as this thing called "work" starts again bright and early tomorrow.  Work is sounding less foreign everyday, but I'm already looking forward to my next sabbatical in 1682 days.  Time to start saving and planning!