Being a Daddy's Girl

Ever heard someone described as a "Daddy's girl"?  Sometimes it's used as a term of endearment and sometimes with sarcasm or spite.  I'm dedicating this post to describe what it means to me.

I refuse to let any boy tell Layla who she is.  As an adult I know the source of my identity is God alone.     I am who He says I am.  I don't let the TV or friends or family or even my own thoughts dictate my identity.  Have you ever made a mistake and thought, "You big dummy!"?  Those thoughts and words have a powerful impact on our own lives.  Even something as insignificant as that can have devastating long term effects because we start to believe whatever we think and say whether it's true or not.  I still think negative thoughts sometimes, but I've come to the place where I'm open enough to challenge what I and others say about me by comparing it against whom God says I am.

Here's the problem.  Layla isn't mature enough to build her identity based on God's Word (because she can't read yet) or his voice (she's starting to hear, but it takes time to develop that).  So for now, that responsibility of being Layla's inner voice is up to me.  What I tell her about herself has a direct impact on her self-esteem, confidence, courage, and outlook on her future. This is the coolest superhero power ever!  but it's short-lived.  I only get a few years to convince her of the truth.  If I tell her she's lovely and wonderful and worth my time then she believes me!

When I do this correctly and consistently then she gives me more permission speak into her life.  She craves my attention, affection, and approval.  This is normal and proper.  If I don't meet her needs now then she will develop judgements against me and against men and against God.  She'll attempt to fill these needs with other people or things or achievements or (insert anything a girl seeks that is improper).  However IF I meet her needs now then she develops this intensely useful thing called trust. She knows how to give love because she knows how to receive love.  She knows how to share because she live out of abundance and not out of scarcity.

Sometimes her love needs feel like a bottomless pit, but I know every seed I plant will lead to good fruit.  in time.  That's a tough part of having a Daddy's girl.  Her needs seem to be unending, but with every seed I plant, I'm building her capacity to love others and live a life of greatness.  My goal is to make her mind so filled with compliments, encouragement, and love that the words of others will have no room to squeeze in her ears.

One of the most prolific concepts she gets is how important she is to me.  I have her convinced she is the second most important person on the entire planet to me.  Kendra is first.  Layla is second (in a tie with Easton, of course).  It's one thing to feel loved, but totally different to feel like you are more important than anything or anyone else in the world.

I've lived life with that in mind, but just recently explained it to her in words.  Now she tests me on it. In the car she'll say, "I'm more important than your friends, right?"  and I reassure her with a resounding "yes!"  Then, more importantly, I show her.  We had a few people over to our house one night and I went to her room to do the bedtime routine of songs, hugs, and kisses.  I left the people waiting in the living room.  Without me saying anything Layla recognized she IS more important than my friends.  It's not enough to say something over and over.  There must be actions to prove words to be true.  It is possible for a daughter to see her father as authoritarian through his fear tactics or shame or guilt or any number of negatively prescribed manners.

A daughter WILL hear words and see actions of her father to define her identity.  Those Dad's

Using that content as the backdrop I'll describe what it means to be a "Daddy's Girl" or "The apple of her father's eye".  It means she receives love from me at such a deep level that she knows in her heart how important she is.  Not in a spoiled rotten brat kind of way, but in a secure, confident kind of way.  I was not designed to nurture Layla.  that's Kendra's responsibility.  I was designed to speak life into her and define her identity of who she is.  I was made to call her out to become the woman God designed her to be.  by the way, it's never too young to start.

All of this may seem a little too ethereal for some so let me put some concrete examples to my content.  20 hugs per day with at least one being longer than 20 seconds.  That goal is one I set for myself long ago.  Some study somewhere on the internet (which means it must be true) referred to the emotional needs of children regarding hugs.  I believe 12 per day is a minimum of maintaining the current status of a child's emotional stability.  20 is a high water mark I set for myself because I like round numbers.  This doesn't include what she gets from Kendra or relatives or friends or teachers, just me.  Another study suggests a hug longer than 20 seconds produces an increase in trust.  Layla doesn't stay still long enough for me to get too many 20 second hugs in, but when we do I make the most of it.

Simple things like that lead to a daughter's admiration of her father.  To me this creates a Daddy's girl in the most positive context.

Everything above this comment is just a dump straight from my brain to paper.  I think this could be consolidated and formatted to be useful somehow, but for now it'll remain as just my attempt to put my heart and mind on paper, digitally speaking.  As a more explicit example of the concept above I'll describe the Daddy date we just had.

Yesterday I told Layla we were going on a Daddy date today.  She gets excited about that because we've had some excellent times together in the past during our dates.  I planned this one out more than usual with extra effort and extra dollars going towards this min-celebration.

I made reservations at Chop's steak house for an early time so we wouldn't stretch the bedtime routine too far.  last night's fireworks led to a 10:00 PM bedtime, which happens less than five times per year.  I bought flowers at Trader Joe's, took them and a vase to the restaurant, and asked them to care for the flowers until we arrive.

Back at home I dressed up in the most dressy outfit in my suitcase.  Layla had her hair done-up by Kendra, then dressed in her Merida princess dress and crown.  We drove to the restaurant and arrived promptly on time for the reservation.  Easton or I usually open her door and hold her hand to help her down.  Tonight was no different.  I want her to know how to be treated like a lady long before she ever has to depend on a boy to act like a gentleman.

Inside the restaurant they had the flowers waiting on our table.  A few minutes into our conversation I told Layla the flowers were for her and she can take them home.  She was amazed!  She asked, "Did you really bring those to the restaurant early so they would be on the table?"  I was happy to know she understood what "effort" means when it comes to spending time ON her and not just WITH her.  I spent my time earlier in the day when I could have been doing a million other things.  The little stuff matters... even to a five-year-old.

Every waiter and patron and even the owner of the restaurant came by to talk with Princess Layla.  She was boldly kind, as always, with impressive manners. 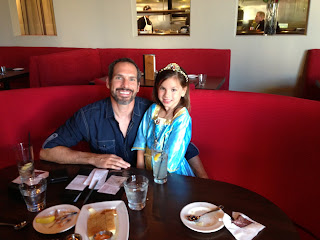 I used a buy one get one free for our meals.  That was part of the reason for picking this restaurant.  I know Layla didn't care about getting a good deal, but I do!  She ordered the chicken fettuccini and I ordered the shrimp scampi with noodles.  We slurped our noodles.  The bad behavior was completely out of character for a princess, but she's five and I'm silly so we did it! 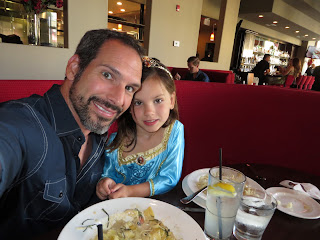 Our conversation was filled with loving compliments and encouragement for her as she enters kindergarten.  We talked about how she could be anything she wants and do anything she wants in life.  I was pleased with her willingness to listen and respond as I did my best to share heartfelt thoughts.  I've been waiting since she was born to have a real date with meaningful conversation and allowing her to experience an elegant evening out together.

She posed outside with her flowers to let me capture the moment.  I don't know how many more years she'll want to wear princess attire out in public, but for now I'm enjoying every occasion. 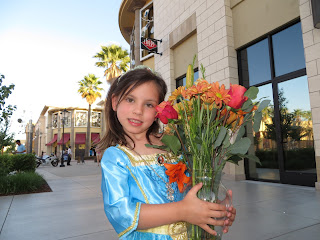 She asked for dessert in the restaurant, but I had a better idea already planned.  Across the street was Pinkberry, the frozen yogurt business.  We tried a few flavors then she settled on cherry with caramel sauce and gummy bears.  Sharing isn't instinct for a two-year-old, but it is getting to be for Layla.  She took the first bite then offered me the second.  As always, I gladly accepted! 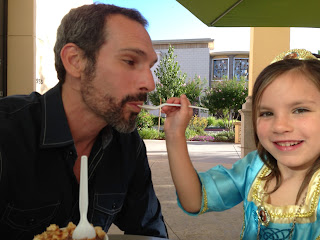 We walked along the outdoor mall sidewalk to window shop and let our food settle.  Everyone we passed smiled and stared.  Layla waved at each person making eye contact.  Her joy is contagious.  just walking with her and observing how much beauty she breathes into the world is a real honor.  Calling her a Daddy's girl is a real compliment.

Next stop...  Boy time with Easton.  plans are in progress.  See you soon!

Loved your description of your special date with Layla. If more dads did this it would certainly make this world a better place. Your unselfish love is demonstrated so well. Miss seeing you all. Love ya gobs, MOM