Riding a bicycle without training wheels is a rite of passage for most kids.  A neighbor kid and my friend's kid, who are the same age as the twins, are winning trophies riding bmx bikes on dirt tracks.  Easton and Layla are not even able to ride without training wheels.  The comparison is between kids on opposite ends of the spectrum.  I wish the twins were able to ride two-wheeled so we could go for rides together.  I'd be lying if I said it didn't create a bit of envy inside me, but I'm not losing any sleep over it.  For all the wonderful aspects of who Easton and Layla are and their many talents, bike riding is just not one of them.  yet.

Mom and Dad bought them 16 inch bikes with hopes of getting them on two wheels.  Since the first day we arrived almost four weeks ago we've been planting seeds of how fun it is to ride without training wheels.  They've been apathetic for the most part, but Dad convinced them a few times to give it a try.  they worked on balance and then a short push from Dad to me. 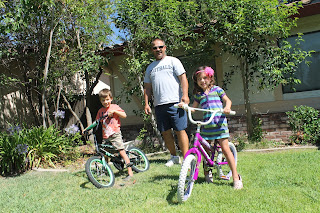 Once they realized it doesn't hurt to fall in the grass then they were much more willing to pedal a few times.  Learning to ride a bike is a process, I know.  I doubt they'll be fully functional to ride by the time we get home, but at least they've been exposed to it.  One thing is clear; their 12 inch bikes at home are entirely too tiny to ever ride again.  Craigslist, here I come!

Ouma bought a hammock for the backyard with two anchor points on each end.  That prevents it from spinning around and dumping the occupant on the ground.  The twins had some cuddle time reading books and watching the squirrels.  I haven't found the way to express to them how lucky they are to sit rest comfortably outside while the temperature at our house in Phoenix is a toasty 108 degrees.  We come to Ouma and Oupa's house for family time.  We choose THIS time of year to escape the heat.  These two kiddos are happy to hang out with our Sacramento friends and family for extended vacation. 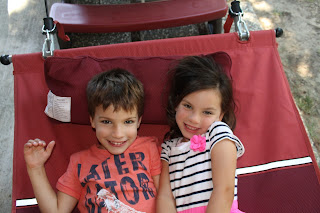 Uncle Casey wasn't able to join us for the neighborhood block party Independence Day celebration.  We saved back a box of California approved fireworks for a special time with him.  The twins were able to light the fireworks, which is a different experience than simply watching the big kids of the neighborhood set them off.  We did some silly dancing around the big fountains and holding our ears for the loud whistlers.  I'm glad Casey was able to spend the evening with us and it was worth keeping the kids up past their bedtime so we could all enjoy the fireworks together. 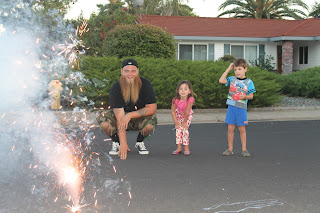 My last Daddy date with Layla was such a big success that Easton picked up on the magnitude of fun.  He's been patiently waiting his turn for boy's time together.  Oupa had the idea of going to an Oakland A's baseball game.  I agreed it would be a great experience for us so he set it up.  On Sunday we were backsliders who skipped out on church.  At least we made the most of it.  From 9:00 AM to 8:00 PM we spent the entire day hanging out together.  Here's the prize picture from our time together. 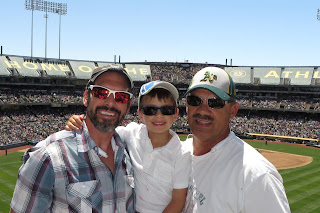 We drove to the bay area with Easton knowing we were going to his first MLB game ever.  What he didn't know is that we planned to take the BART mass transit system for the final leg of our journey to the stadium.  When he figured out were going to ride a train his interest in the day grew even more. 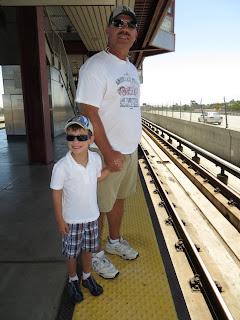 Being from the middle of suburbia Easton's only been on a light rail a couple of times.  Some people dread the daily commute and ride on mass transit, but for this boy it was a real treat. 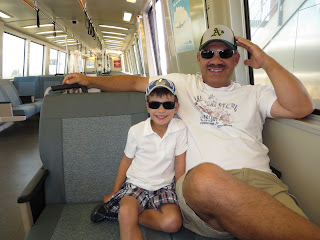 We had the whole train to ourselves because we started at the very end of the line.  Easton was able to run around the car and take our pictures. 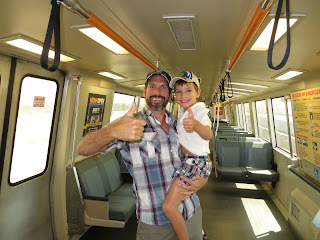 The number of the steps we took between the car and stadium was measured in miles, but I gladly welcomed the outdoor strolls in the slightly breezy and cool afternoon.  Our seats were out in center field with a good view the plate.  I'm pretty sure we could see the strike zone better than the umpire at home plate.  I found the next picture intriguing because of the resemblance of their profiles.  He's not quite as dark skinned, but sure looks like a family match to me! 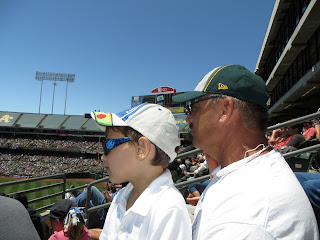 I took a panoramic picture of our seats.  Not sure if it will come out as well here on the blog, here's the view including the tall guy who sat in front of Easton with the big straw hat. :)

We ate lunch and snacks all the way through the third inning.  Easton lasted another four innings before needing a bathroom break and some exercise.  I took him into the team shop with the hope of finding a hat that fit him and he likes.  bingo!  He set his eyes on this one and now he's officially an A's fan. 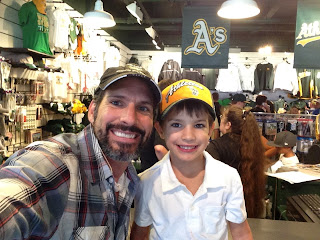 One of Easton's game highlights was when the crowd did the wave.  The wave made the rounds three times.  I held Easton up over my head for the first two then I captured this short video clip of the last time around.


I was hopeful Easton would make it through all nine innings.  He did.  What I failed to consider was the possibility of extra innings due to a tie ball game.  With no reason to leave early and Easton patiently enjoying our time together Oupa and I agreed to stay for the ending.  I'm really glad we did because the A's won with a walk off.  Our celebration picture followed the high-fives and cheering. 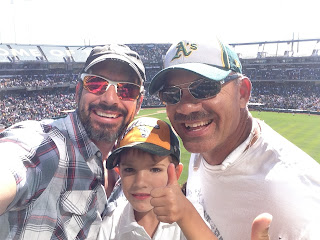 As we gathered up our things to leave the stadium I noticed a kid-sized glove stuck in the chairs next to us.  The group of people who sat there left several innings ago so I commandeered the glove and gave it to Easton as a souvenir.  In hindsight, I should have given it to lost and found, but occasionally I make bad choices as well.  confession is good for the soul.  making good choices is better because it makes confession unnecessary.  Such is life.

The train ride, stop at In-N-Out, and drive home were as enjoyable as the rest of the day.  Easton claimed this was "the best day ever", which is a good benchmark of success.  He mentioned how awesome our boy's time was on several occasions since then.  His recognition of our efforts and genuine bonding time together made the whole day worthwhile.

Layla spent the day with Ouma and Kendra, but I don't think there are any pictures from their relaxing time together.  I'll check with the boss and recount their day as best I can.