The 4 Webbs packed up the minivan and drove from Texas to Oklahoma.  We planned to stop in Dallas and surprise the twins with a day of water park fun at White Water.  Being the spontaneous, flexible family we are, we decided to instead check out a water park called Splash Kingdom just off the highway.  With no idea what to expect we pulled into the parking lot to get a closer look.  Easton and Layla exited the car with egg-sized eyes and mouths open wide.  They had a Keanu Reeves "whoa!" moment.  I researched to find out the insanely expensive ticket prices and compared them to the equally insane prices at White Water.  Well?  We're here... let's do this.  Turned out to be a great choice.  We had the a blast running around like four little kids.

Easton really stepped up his courage by taking the plunge down "The Express" at Splash Kingdom.  The video shows him going down first and then me.


As we waited in line Easton and I overheard the other kids talking about how scared they were of the express ride.  Easton jumped into the conversation saying, "I did that and it was awesome!  Now I'm going to do it again."  The other kids were waiting for a different ride and they took notice of his claim to fame.  The kids looked at me as if to say, "we don't believe him.  is he telling the truth?"  I validated his claims and the kids all gave him a high-5 with congratulatory statements.  He was very proud when he realized how courageous it was for him to ride it.

I made it out to be no big deal and that's what set his expectations properly before we did it the first time (sneaky daddy).  Layla ran behind Kendra when I asked if she wanted to ride down the Express.  I shook my head and cursed the Tower of Terror in Disneyland for tearing down the trust between us.

When Easton wasn't doing dare-devil stunts he had just as much fun in the kiddie castle pool area chasing Layla in knee-deep water. 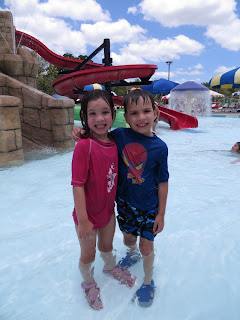 Kendra got burned to a crisp by the sun on her legs and back.  This was mid-scorching when we were all soaking in the sun.  Their smiles show the excitement of the surprise pit-stop. 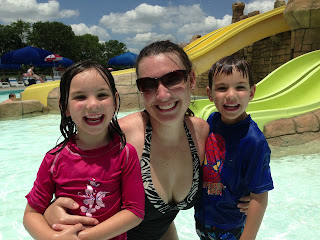 The water park isn't huge, but neither were the crowds.  We were able to ride the slides several times without waiting in line very long.  The twins were confident enough to ride without a parent.  Layla was a little apprehensive, but after they left the starting gate it was nothing but giggles and thrills. 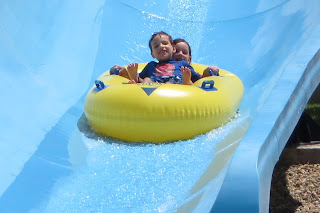 and since Kendra had to take the pictures that left me to take a solo run.  I screamed most of the way down just to get some laughs from the people walking up the steps. 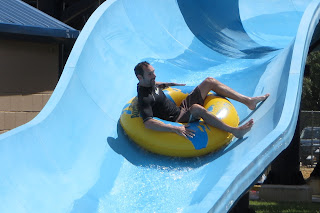 The first thing Easton saw when we arrived was the volcano ride.  The top looks like flowing hot lava and the two slides coming out are fast.  at the end we were dumped off into a pool 10 feet deep.  Easton and Layla loved the ride and had no problem splashing down and swimming to the side for the exit. 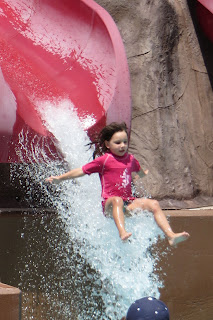 They were both barely above the 42" minimum height requirement.  Each time we went to ride a ride they would have to be measured.  They enjoyed it because each time they "passed" we would all cheer as though they won a gold medal at the Olympics. 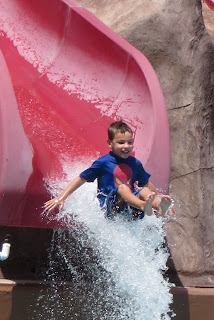 I caught one more quick picture with the big splash kingdom sign before hopped back on the highway.  They were well exercised and worn out, thank goodness. 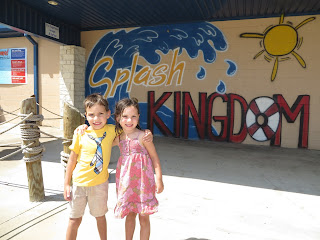 I can't remember exactly where the SPAM pictures were taken, but in some grocery store there was a kid-high photo opportunity next to the SPAM display. 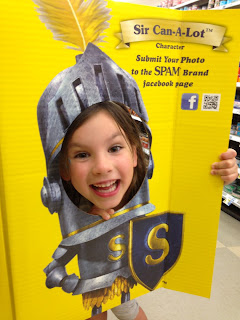 These two characters are hammy enough to do this with style.  They viewed their own picture several times after we took them.  Any time I wanted to get a laugh from them I turned on the camera and showed these pics.  Truly humorous... 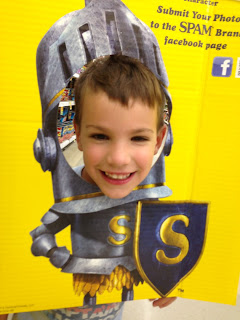 The rest of the ride to OKC was uneventful.  The end of our journey took us on I-35 through Moore where the tornado carved a path. 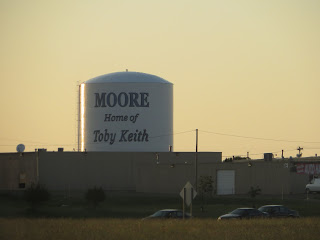 Seeing the destruction from the highway was horrific.  Just knowing people died, trapped in their vehicles, just a few days ago right where we were driving.  It was a sobering conclusion to our long drive, but we were glad to be done travelling.

During 30 days of vacation through four states we didn't stay a single night in a hotel.  The driving portion of our trip took us from OKC to Springfield, MO to Memphis, TN to Chattanooga, TN to Nacogdoches, TX and back to OKC.  What a unique opportunity we had to experience such an adventure!

I still have Mary's to catch up on, but I'm getting closer to blogging real time again.