To recap our previous few weeks, I've been off work now since April 25 (roughly 8 weeks).  Kendra and I attended a conference in Dallas, the 4 Webbs joined Kendra's family for a week in Disneyland, and then the 4 Webbs took a tour of the midwest for 30 days.  Talk about a once in a lifetime opportunity!  Being away from home was everything and more of what I envisioned when we planned my sabbatical several months ago.  However, even with the best of plans there are limits and drawbacks because of opportunity costs.

During the last week at Aunt Mary's house Easton and Layla both were missing home to the point that they expressed it daily.  Their longing to be back in their own rooms and familiar environment had nothing to do with Mary's.  The longing was due to the long absence from their bed and toys and day-to-day life.

When the day finally came to fly home, the twins were excited and ready.  Our departure was delayed, but eventually Southwest came through and gave us a plane to board.  Seeing our plane taxi up to the runway was cause for celebration. 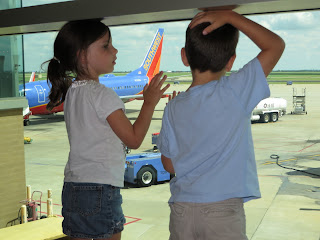 I sat with Easton and Kendra sat with Layla.  Even though we checked-in online and printed our boarding passes within seconds of the availability window we were still way far in the back for boarding.  There were no three seats together like when we flew to OKC.  There weren't many two seats together either.  Easton wasn't able to get a window seat, but there are worse things in life than missing out on the views afforded by a window seat.

We arrived home safely and slept like bears in a coma, tucked into our own comfy beds.  Watching the sunset over our big Saguaro cactus was a sight for sore eyes. 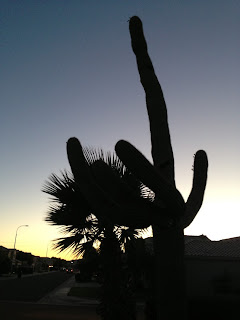 There was one picture I neglected to post from our OKC trip.  This one of Easton and Layla.  It is significant because of the expression conveyed in it.  As I walked with them between businesses in a shopping area I purposefully stood behind them with guidance for where we are going.  I pointed in that direction and said, "go ahead, I'm right behind you."  They walked hand in hand abiding by the street crossings and people traffic patterns.  Easton lifted Layla's hand and kissed it just as I took this. 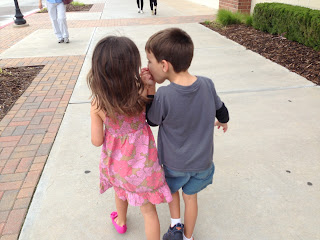 Two things expressed here.  One is that I'm giving them a chance to lead more often and quietly observing their behavior without correcting them unless it is absolutely necessary.  They are headed into Kindergarten in 6 weeks so their internal guidance systems need to be given more room to navigate through life without Kendra and I involved.  Two is that Easton is taking care of Layla more and more now.  Not in a co-dependent way, but in a big brother way.  I'm glad to see him stepping up and acting like a gentleman on his own prompting and choices.

After two short days back at the home sweet home Kendra flew to Sacramento.  that's right, she left me alone with the twins for five days! 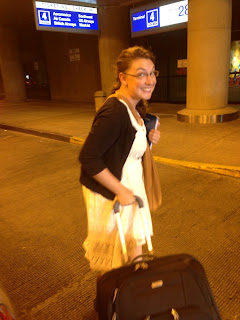 I was excited for her to have kid-free time with Mom and her Bree, her future sister in law.  She threw the wedding shower and bachelorette party for Bree.  That means her vacation from the kids and me wasn't really a vacation, but at least it was a chance to spend a few days away after being around us for 30 days straight.

The twins and I had a great week together.  It was fun to be responsible for all meals, schooling, and adventures.  Well, it was fun for a few days anyway.  Not sure I could do this full time, but I can do anything for a few days...

First stop after dropping Mommy at the airport was a trip to the grocery store.  The fridge was bone dry from being gone 30 days so i had to replenish it with enough food to last us 5 days.  I gave the twins a chance to push the cart just for fun.  They didn't hit anyone and kept it between the shelves.  They gotta learn how to drive sometime, right? 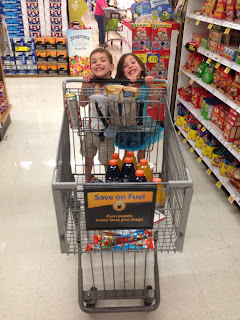 Back at home I realized there was nothing to eat (just a joke) so we went to sushi.  happy hour prices make it reasonably priced and eating healthy certainly has a cost. 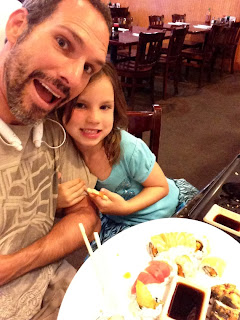 With one of them on each side of me we chowed down and conversed with the sushi chef since we sat at the bar.  Easton likes all the same sashimi (raw fish) I like.  big surprise, huh.  If only i can get him to like carrots and tomatoes.... 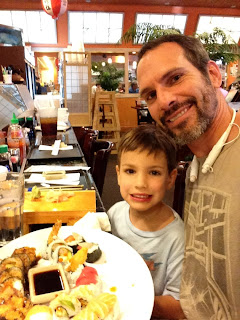 At home we had full days of playtime and school time.  After getting out of the pool Layla put on her Snow White attire and exclaimed, "my hair is black when it's wet so I need to wear my Snow White outfit because her hair is black."  Makes sense to me. 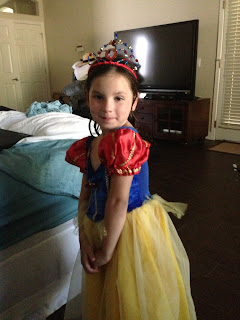 Out of five days I only included two people (Jacob and Kyle) for a total of four hours.  I could have packed my days with having friends over to hang out, but I intentionally kept the front door locked and my phone off.  I wanted the twins to have my full attention and daddy time.

We went to Culver's for an ice cream sandwich treat after swimming.  Mint Chocolate Chip is their new favorite flavor.  Smash it between two big Oreo cookies and you have a tasty treat. 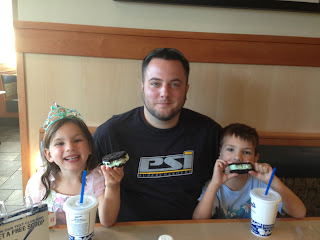 While we were touring the midwest our friends used the pool to keep from melting in the AZ heat.  Chris discovered the deflated orca whale and blew it up.  The last time the twins saw the inflated orca whale was last year, but it was too scary then.  They decided to have some fun playing on it. 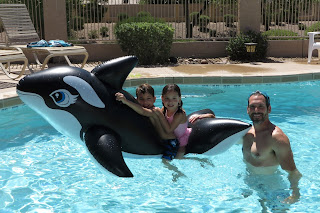 I gave them a lot of independence during our Daddy week.  One example of this was the freedom to choose their own clothes.  I did my best to give them responsibility for the morning and bedtime routines.  Layla came out wearing her special dress made by Ouma.  She was ecstatic about wearing it.  Ta Da! 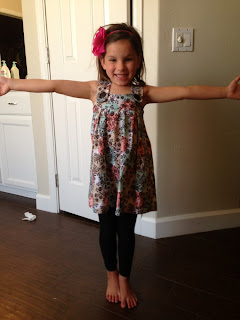 I stumbled on a coupon for Jamba Juice so one of the days we went to cool off and get some berries with protein. 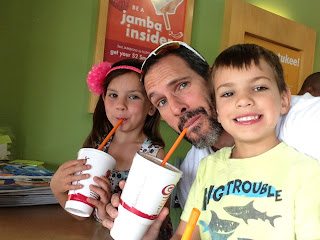 Layla saw my sunglasses on my desk and tried them on.  She looks uber cool, but her reasoning as to why she had to have them is because they match her dress.  She's so observant. 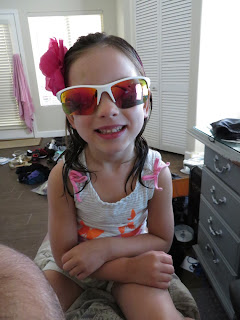 We had some form of schooling each day.  Kindergarten is coming up quickly so we need to start ramping up the learning.  We took one morning to learn about one of my favorite topics:  money.  Until this day they saw all coins as equal value.  However, now they can argue over who's stack of coins is worth more as well as who has the most coins.  greaaaaaat!  Easton was most interested in the quarters with state emblems on the back.  I was asked to read from which state each and every quarter came from.  He was smart enough to ask me if these quarters are worth more. 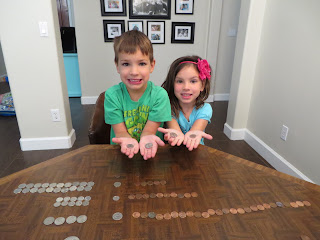 The money learning exercises led to earning some of the coins.  That led to the reintroduction of the Give, Save, Spend containers.  Each time they earned coins they loaded up their containers in the proper order.  There was some seriously good behavior going on as they filled them up. 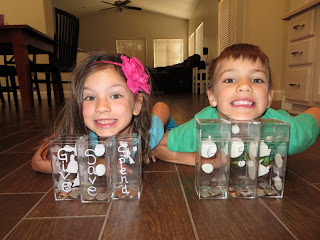 Each day I made a list of ways they can earn money.  I kept this handy so I could watch for good behaviors resulting from right attitudes. 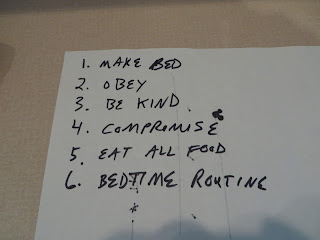 I searched the clearance rack at Target and found Easton a gem:  Angry Birds pajamas!  He is a big fan of Angry Birds and also had a real need for new pajamas that he could fit in. 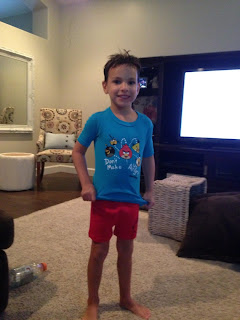 The sunrise to sunset regimen was not stressful or taxing, just long.  It was worth it because I felt more connected to Easton and Layla than any time in their lives.  Their excitement to spend time with me and include me in everything was very fulfilling.  They invited me to see every bug on the sidewalk, every pirouette, every new Xbox discovery.

I accepted their invitation and paid attention because I believe that if I am interested in their lives now for the little things, then they'll continue to invite me to be a part of the big things when they get older.  This is all just theory because I've never parented teenage kids, but based on my own experience and observation of other families I'm sticking with my theory.  Many parents ignore their kid's request to be involved in the little things.  I've seen how those kids turn out.

There are many things I keep in the front of my mind when it comes to being a father, but few are more front-and-center than this one belief Easton and Layla need more than just my presence in the same house or park or restaurant.  They want my attention, affection, and approval.  I don't want them think they are the center of the world, but I want them to know they are the center of my world, after Mommy.  As I review my list of priorities I'm content with how I'm living that out day to day:

God
Kendra
Easton and Layla
Career
Others
Me

By the way, church is included in the "others" section.  That means the only person on Earth more important than Easton and Layla is Kendra.  I don't want to tell them that...  I show them.  To me that defines the nature of a parent-child relationship.  If they don't feel important then they aren't.

This last section was just me writing out my thoughts.   Notice there was no "thus saith the Lord".  I'll have to chew on that a little more to discover the truth or lies in there.