The only thing I missed from being off the grid for 7 days was blogging, but I'm back at with no plans to be that far away from society again for a long time.

From Collierville we headed even further East to Chattanooga for a visit with my Uncle Wayne.  None of the 4 Webbs had ever been further East than Missouri prior to this.  I couldn't even spell Chattanooga last month.  The twin’s sleeping schedule consistency went out the window a long time ago, but since we were only on East coast time for 4 days we never made the shift for their schedule.

The drive between Memphis and Wayne’s was scenic with mile after mile of tall, densely packed trees covering rolling hills.  My allergies didn't appreciate it at all, but the rest of my senses were peacefully delighted.

We arrived mid-day at Wayne’s house in Highland Park.  Many of the houses in his area were over 100 years old.  Some were restored to their original look, some remodeled to be more modern, and some were old and dilapidated.  Anyway, we missed seeing Dawn Marie by one day because she went out of town for work the night before we arrived.  We all agreed it was probably for the better though because She’s not used to having five-year-olds run around her house.

The first day there we hung out at Wayne’s house and acquainted ourselves with his two big, friendly dogs.   We ate healthy meals including hand-shucked corn, homemade pickled okra, and canned green beans.  My Grandma Siebold would be proud of how Wayne is carrying on the traditions.

Easton and Layla like to sleep in the same bed because they stay up late talking and laughing.  It’s harder to get them to sleep, but at Wayne’s house the space was limited so there wasn't much choice.  Kendra and I snuck in to say goodnight and found them cuddled close to each other resting peacefully.  They used to sleep this close in Kendra’s belly so it doesn't take any adjustment to feel perfectly at home this way. 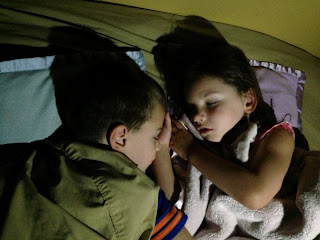 On Sunday Wayne was excited for us to go to his church where he on the elder board.  I had no preconceived notions about the denomination, but it was surprisingly similar to any other contemporary Christian church.  Easton and Layla joined us for worship, which I enjoyed, and then kids were dismissed for their own learning environment.  Afterwards when I asked what they learned, Layla said, “We talked about choices.”  I smiled proudly knowing the two of them were so steeped in knowing choices that they could have taught the class all by themselves.  Every single day we work through their behavioral issues by having them explain how good choices lead to good consequences and bad choices lead to bad consequences.  As we waited after church for Wayne to tend to church business I took this picture.  Kendra was all dressed up and made up for the occasion, looking extra pretty. 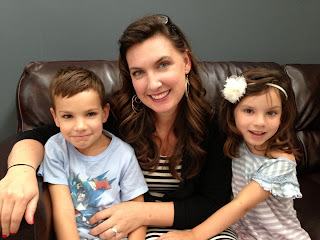 After church we drove down the street to a restaurant called The Terminal.  This used to be the hotel building back in the day when the Chattanooga choo choo was rolling through town. 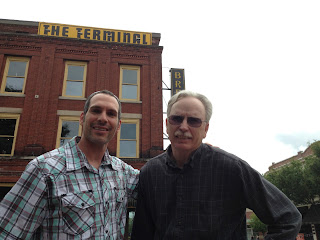 Then we walked through the actual terminal that is now a hotel.  Some rooms are remodeled boxcars in the main yard area.  Here is the historical train on the tracks behind the twins and Wayne. 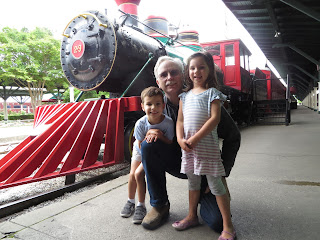 Easton and Layla were excited to be in a real steam engine car. 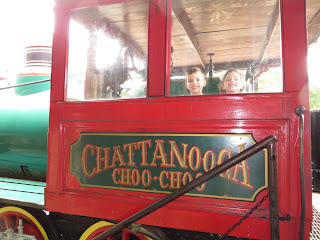 Wayne’s front yard is well landscaped with a big front porch.  Off to the side is a little sitting area with a sign that reads, “Don’t piss off the fairies”.  I had to take a picture of Layla because she is my little fairy who still can’t read signs yet so I don’t have to explain the humor regarding the contradiction between the sign and my sweet princess who has such a joyful heart. 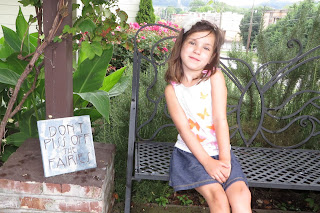 The weather was a mix of partly sunny with occasional thundershowers.   We found a break in the clouds to go for a walk at a dog-friendly park.   Wayne’s dogs, Piper and Prue, were well behaved and old.  He broke the rules a little and let them chase a tennis ball so the twins could play fetch.  The wooded area behind the park provided a shaded pathway for us to wander.  The backdrop was quite a difference from our normal Arizona landscape. 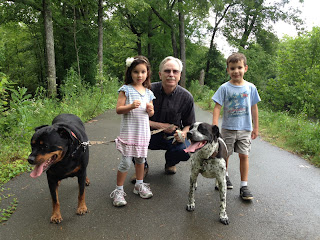 One of the purposes in taking our trip is to show the twins this contrast of environments.  Now all five of their senses have experienced something completely different than ever before.

The next day was our most intensely active day.  We took a trip to the Chattanooga Aquarium.  There are two huge, separate, multi-level buildings.  One was salt water and one was fresh water. 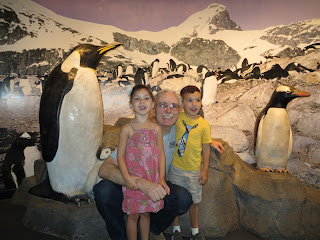 A big tank of penguins made for a fun learning experience as they watched them swim and play.  Watching Youtube, Netflix, and movies only get you so far in understanding something.  There's no substitute for  seeing something with your own eyes. 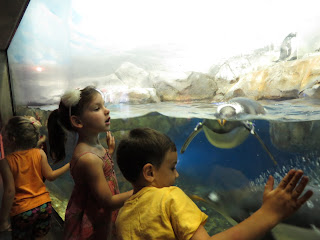 As luck would have it, we were in the right place at the right time to see some shows.  One show had a diver in a tank with sharks where the audience asked the diver questions.  He was able to hear us and respond to questions.  Easton and Layla didn't get a chance to ask a question.  They were so awestruck by the huge fish and scenery that they were completely quiet. 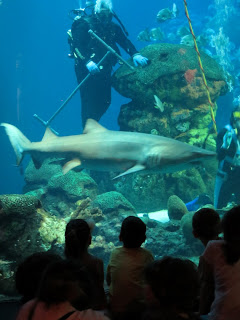 For this next picture all I could think about as the twins looked through the portal was, “That huge crab looks delicious!”  I’ve been craving seafood ever since… 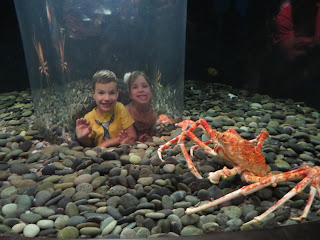 At another exhibit a lady held a snake and let kids come by to pet it.  Easton and Layla were brave and unafraid as they pet the creepy crawler.  Yuck. 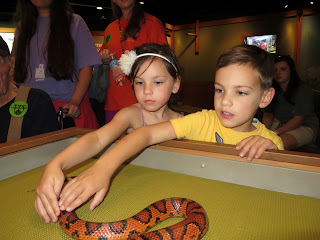 The other petting area included a tank full of sturgeons and sharks.  The sharks were new to the aquarium so we were encouraged not to touch them.  No problem!  Yes ma’am!  Easton excitedly touched the sturgeon with two fingers exactly as described by the tank watcher lady.  This was a big bravery test for a 5 year old and he passed with flying colors. 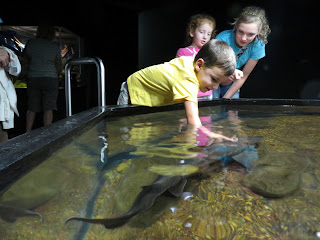 Then at another tank we watched a diver hand feed baby squid to huge stingrays. 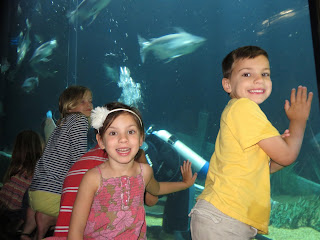 After we left the aquarium and ate lunch we were treated to an unbelievable guided tour of the civil war monuments around Chattanooga.  Wayne is a plumber who's been driving around the city for 15 years or so.  The odd thing about the civil war monuments is that they are spread all over the countryside in random yards and hilltops.

Many of the markers had extensive details of what battle was fought at what time and the counts of killed, wounded, and missing.  The numbers were staggering.  When I asked "why are there so many soldiers listed as missing on these plaques?"  Wayne explained that during these battles many men grew tired of war or just quit and started a new life somewhere else. 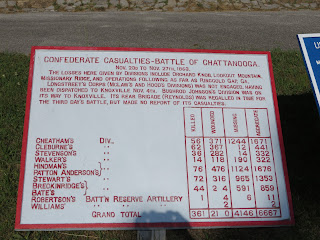 The biggest consolidation of memorials was on a hilltop with several plaques that detailed body counts from each state represented. 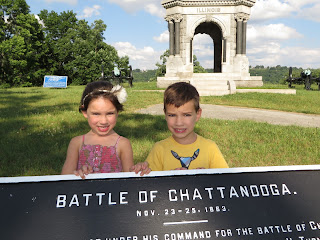 The statues were impressive in size and detail, but I was borderline ashamed by how few names I recognized. 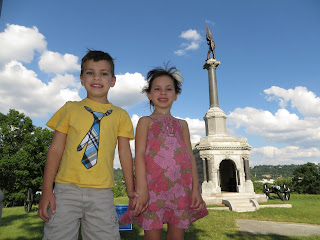 Cannons!  Nothing captures the visual description of the civil war like a cannon on wheels. 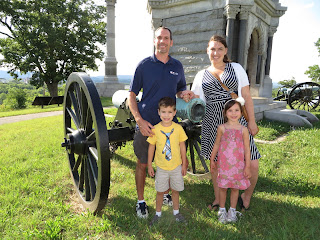 Standing next to it was fine for a family shot, but Easton and Layla are incredibly interactive.  Nobody was around and no signs prohibited climbing so up they went!  It's one thing to read about history, but another to sit on it. 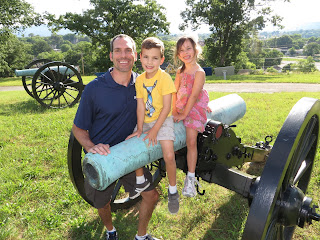 We drove through several neighborhoods where we saw massive mansions with cannons and plaques right in their yard.  Then we drove out of town a ways to see this huge, castle-like monument signifying the Chickamauga Battlefield in the national military park. 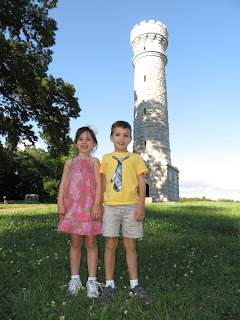 We climbed up all 136 steps to look out over the expansive meadows and hills.  I don't believe any picture exists of just Wayne and I together. 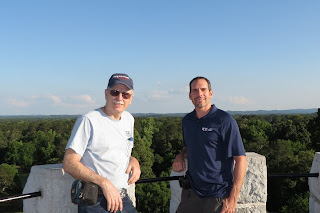 And a different perspective on this was the time Kendra and Wayne were able to share.  Even though we weren't there very long she still had opportunities to get his advice.  Mostly on topics like gifts of the spirit and theological viewpoints.  She really appreciates his experience and insight in these areas. 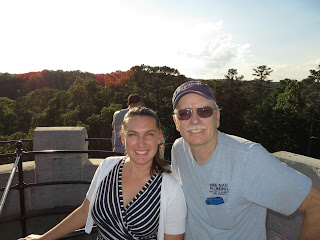 I know Easton and Layla weren't able to grasp how awesome the tour was, but I'm glad we went.  They finally understood the concept of past, present, and future last month.  Historical significance is something they can't really relate to yet though.  I tell them dinosaurs existed 5 million years ago and they give the same reaction as when I tell them Wayne's house was built 100 years ago. 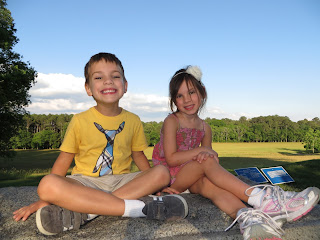 Seeing Wayne was worth the time, expense, and miles.  I was surprised to learn no other family member or friend from his past has ever taken a trip explicitly to see him in Tennessee.  I'm not sure when or how we'll get to Chattanooga again, but I hope he comes to visit us in Phoenix again.