Yeehaw!  We functioned as Texas locals for after a few days at the lake.  Check out what Easton and Layla discovered? 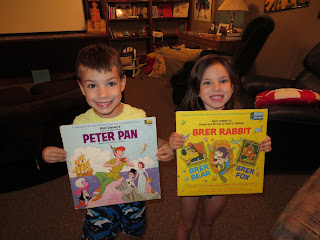 I overheard their conversation as they opened the book and pulled out the records.  They were completely confused about whether it was a frisbee or a big DVD.  Oh, how I wish I had the video recording of their precious ignorance.  I reconnected and powered up this record player to show them the magic of vinyl. 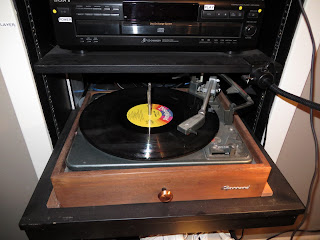 Layla danced around to the soundtrack music and Easton stared intently at the alien concept trying to figure out how it worked.  He gently touched the needle arm and accidentally produced that ear-piercing screeeeeEEEECH!  He jumped back with a jerk of his arm and said, "sorry Dad!  what was THAT?"  I took about 30 minutes of explanation and listening enjoyment to get them to at least understand what a record is.   However, they couldn't possibly appreciate its merits because of their DVD / CD and digital streaming lifestyle.  I don't know if they'll ever have the chance to experience a record player again so I took advantage of the opportunity.

I helped Richard get the Wave Runner launched.  The battery and starting system had some issues.  We weren't sure it was even going to fire up, but we took it down to the boat ramp on the trailer with high hopes.  It did come alive and that presented a scary situation for me.  Night had fallen, I was on this sketchy half-running wave runner, and I had to navigate a strange lake around to the house while Richard drove the truck and trailer back.  Talk about frightened!  I was well prayed up after that long, slow, dark ride to the dock.

The jet ski was well worth it because we took it out daily for spins around the lake.  Easton requested to drive it.  I gladly let him take control of the throttle and feel the rush of rocketing across the water. 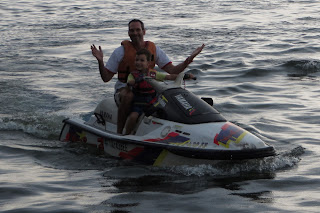 One of the biggest advantages of staying there so many days is that we were able to take lots of breaks from the hot sun to play games and just hang out.  The house didn't have Jenga, but during a trip to Walmart for more worms and iphone connectivity I bought Jenga.  The twins grew competitive quickly as we fought to become the Jenga Master! 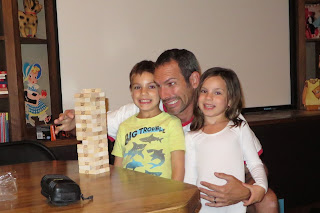 Tubing was great fun for the most part.  Kendra is big fan of tubing so she took a few spins around the lake on the Raptor.  I love watching her have silly fun. 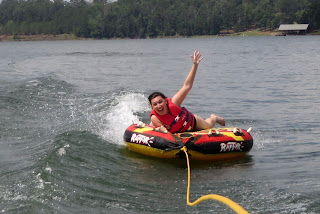 Layla was the least confident about the whole tubing experience.  We're still battling trust issues because of the Tower of Terror ride in Disneyland, but her courage prevailed.  Her ride with Kendra put her at ease about the idea of tubing.  She quickly relaxed and was happy to ride as long as I drove extra slow.  I mean, dog paddle slow. 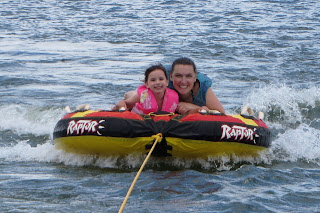 I even let Big Time take the wheel of the boat as Kendra and Layla were drug behind.  His confidence grew three sizes that day. 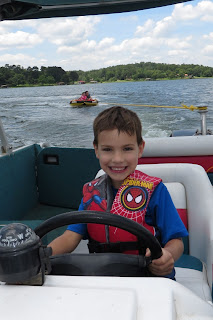 One of Easton and Layla's favorite daily events was a trip to the "beach".  I put it in quotes because there is nothing beach-y about it, but that's what they call it.  There are buoys designating the swimming area, but the marsh, seaweed, and lack of sand means this swim area is nothing like a beach.  Didn't matter to the twins though.  We anchored just outside the buoys and swam in to hang with the local folks, mostly Hispanics.  some kids in their underoos and some adults in their T-shirts and cut-off jeans.  lots of mullets and smokers too, if you can imagine.  Anyway, we had the best time making new friends and listening to their thick Southern accents. 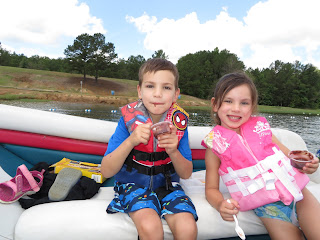 Kendra and I also got up on skis.  They were cheap and made for kids, but we happily used them and had tons of fun hauling each other around. 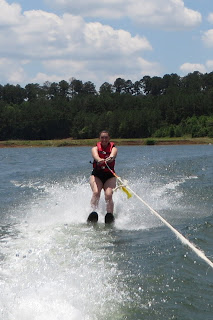 The ski rope was made from knotting together several short strands of marine rope.  It didn't even float so every time we fell and had to swing around, the skier struggled to get the rope from the depths of the lake.  It's hard to see how ghetto the rope is, but as a part of some gifts we left for Richard we bought a new ski rope. 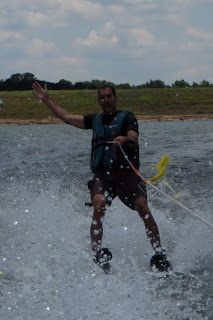 Every day was a lake day full of decisions for which water toy to take out and where to go.  I had no problem tackling these easy decisions as my high water mark of being productive. 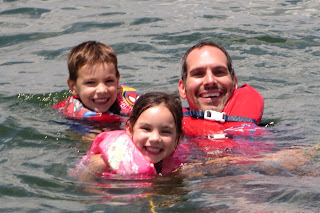 See you tomorrow for part 3!