The 4 Webbs spent 7 days alone at a waterfront house on Lake Nacogdoches.  The rest of our 30-day tour of the midwest has been happily absorbed in spending time with other family members, but this segment was just us four and no more.

The trip from Chattanooga to Nacogdoches was the longest stretch of road on our tour.  We thought about chopping it up into two segments, but our schedule didn't allow for any adjustments in timing.  On the road we ran through the full gamut of highway games, road sightings bingo, sing-a-long songs, and conversations.

Easton and Layla found a way to get comfy and just ride out the day. 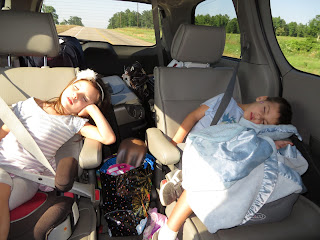 Our week together was the best atmosphere for bonding experiences we've ever had.  Here's my winner-of-the-week picture.  It shows the adventurous nature and increased closeness we experienced. 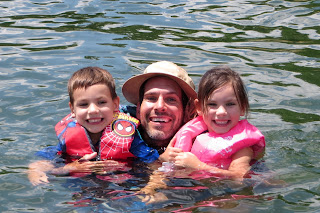 The life vests were purchased from Walmart because the ones provided at the lake house were either adult or for toddlers.  They had trouble figuring out why we need life vests.  Layla said, "We aren't babies!  We know how to swim and I promise we'll be safe".  She agreed with our safety requirements and eventually figured out why life vests are needed (the tube riding incident on the boat scared her).

My Uncle Dave, who passed away 5 years ago, has a brother named Richard.  He and I never met, but started communicating via occasional emails and phone calls after Dave was gone.  I've always had questions and even some unforgiveness towards Richard regarding the battle between the brothers over their father's inheritance.  I had no dog in the fight or benefit one way or the other, but I interacted with both sides enough to develop my own opinions  and judgements.

On our way out of town towards the lake we bought worms at the local bait shop called Yakofritz. We took time to unload our luggage and then went straight to the dock.  We found a Disney Princess rod and reel along with a Cars movie rod and reel.  Layla took her first cast and became proficient over the next few days. 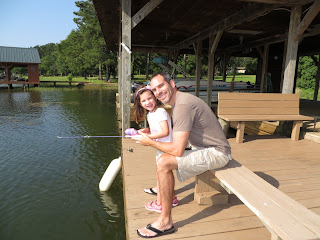 One of the things Layla will need to correct is her misperception that she is a self-proclaimed expert after 10 minutes of doing whatever the new thing is.  It's hard to explain to a five-year-old how long 10,000 hours is, but that's the amount of time required to be an expert.  I'm glad she has confidence in herself, but i'll work with her to make sure she does things with excellence.

This bench on the end of the dock received a ton of use during our time here.  This is one of my favorite pics of the twins.  So different, yet so similar. 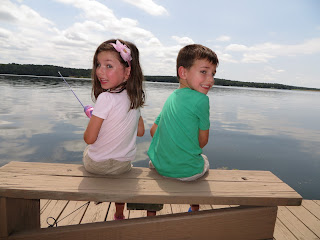 Easton was the first to reel in a fish.  He paraded it around for a long time showing off his whopper of a Perch.  After Layla saw his catch she knew it was possible so the race was on to get her own.  We caught no less than 40 fish during our lake trip and 100% of them were right off the dock. 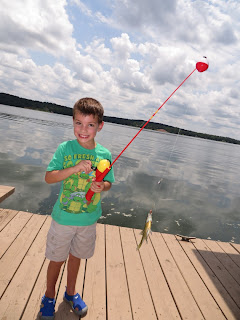 Here is a view from the dock of the huge "cabin" we had all to ourselves. 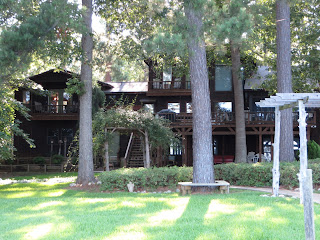 And here is a picture from the top deck of the house overlooking the dock and lake. Talk about a prime lot and excellent accommodations! 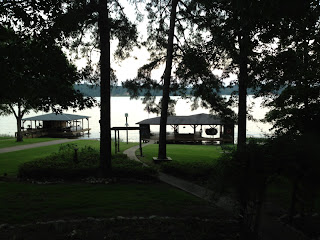 Richard blessed us with a full week stay at the cabin including access to use the fishing equipment, boat, canoe, jet ski, and paddle boat...  for free!  Our trip there still wouldn't have been worth it unless I was able to meet and talk to Richard. 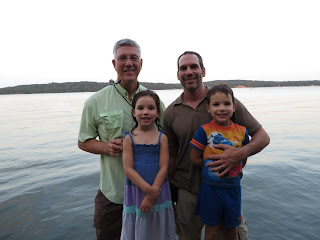 There were things I needed to talk with him about face to face and he said the same thing.  He thanked me being a part of uncle Dave's life and for the relationship we shared especially as Dave was on his way to the other side of eternity.

Richard is so much like Uncle Dave that I was awestruck, fumbling over my words and staring incessantly and fighting the urge to give him a hug and call him Dave.  Aspects like the shape of him hands to the way he walked to his use of sticky notes on the dash of his car.  It was almost eerie.  We had only one evening together because of Richard's schedule, but it was enough.  We were able to share our hearts and understand each other's points of view.

Wi-fi!  I'd been waiting for days to blog at the lake house.  This was the only segment of our trip where we had no other family around to spend time with.  However, when we arrived we quickly realized there was no wi-fi and no cell phone signal.  It was bitter sweet.  In some ways I'm glad we were off the grid so we could fully focus our attention on the family time together, but I also wished I could have posted pictures and stories in real-time.

Going into town was a 25 minute trip so we did it sparingly.  As I pushed the twins through the isles of Walmart they figured out how to squish themselves into the backside of the shopping cart.  Very clever! 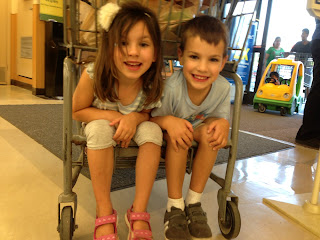 I'll take the next few days and do a one-a-day post until I work through the stories and pictures from Lake Nacogdoches.