I saved a few special outings with the twins for a rainy day, but since we live in Phoenix there was no better time than the present.  It's hot outside and there can only be so much time we can spend in the pool before we reach an official state of waterlogged.

The three of us missed Mommy, but knew she was busy preparing for Bree's parties.  Having just the three Webbs was not fulfilling as a family, but as a Dad and his kids we had an amazing time.  I continually teach Easton how to be a gentleman.  One way he practice is by helping Layla out of the car.  He gets out and goes around where Layla usually has the door open and is waiting for him.  He offers his hand and she steps down like a princess.

We hold hands when we walk together.  Easton is on the traffic side, Layla is in the middle, and I'm on the inside.  They both understand that the man protects the woman and puts himself in harms way in selflessness.  If Easton forgets to fill his role Layla is there with a stern yell saying, "Easton!  Be a gentleman!"  I have to temper her expectations by saying, "Layla you can't make a guy be a gentleman.  you have to let him choose to be one." 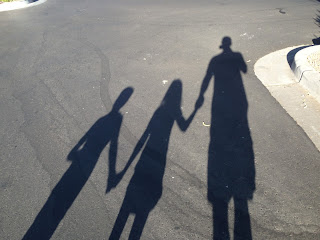 During a previous birthday party at Peter Piper Pizza we had to leave early.  I pocketed the remaining coins for a later date.  Well, this day was "a later date" so we had a full day of Peter Piper Pizza and games.  Skee ball was where we dumped the largest percentage of our free coins.  Easton figured it out quickly and had great results.  I chased several of Layla's skee balls on the other lanes and across the floor behind her.  She kept on going though and I didn't make a big deal about the errant balls because it wasn't my house or my stuff! 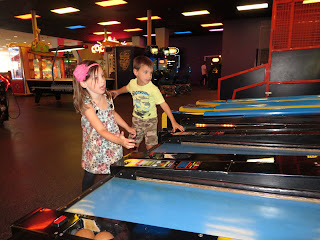 It is of the utmost importance that Easton and Layla know they can fail and still be loved without shame or fault.  That doesn't mean removing bad consequences that result from bad choices though.  It just means when accidents happen and they are learning that grace abounds.

We ran out of coins and headed for the exits.  The twins both stopped and asked for us to eat pizza there instead of going home for sandwiches.  I agreed and we ate our money's worth of the buffet.  Our bellies were full, but somehow they had room to lick the lollipops they won with the skee ball tickets.  Who'd have thought they still had room for lollipops? 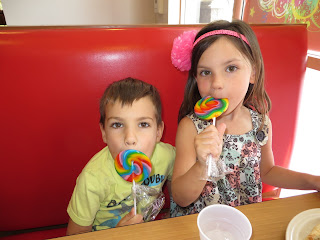 Easton is a sharing boy to the max.  He graciously offered his lollipop so I could pose in the picture with Layla.  Such a sweet, considerate kid and he did it with no prompting from me.  kudos to Big Time.  Layla and Easton both know that we don't necessarily always eat the whole treat whether it is ice cream or candy.  I want them to know it's ok to have a few bites of something and then throw it out.  The depression is over and I refuse to instill in the twins the hoarding and "you must eat all of your food whether your tummy is full or not" mentality.  so, after a few more licks these massive suckers went in the trash and we went on our merry way with content hearts for what we were able to enjoy. 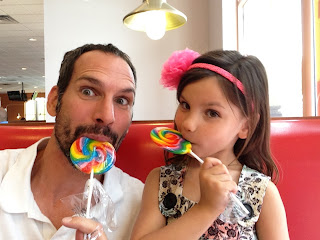 With Daddy doing three meals and two snacks per day we had an exceptionally well balanced diet (if I do say so myself).  Well, I DO have to say so myself because there wasn't another person around to see my meal preparation skills in action.

Fruit.  We ate tons of fruit.  For breakfast I made my oft-requested eggs, cheese, and turkey omelette along with a variety of fruit bites.  Hair is combed, clothes are on right-side up, and food prepared.  My day was successful based on this one picture. 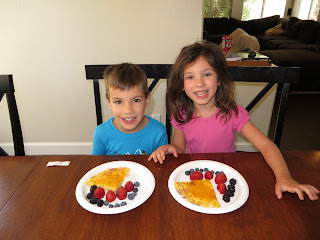 On another day our outing included returning library books and strength training.  Well, it's technically called AirWorx, but it's just a big warehouse with wall to wall trampolines and bounce houses.  They were strength training whether Easton and Layla know it or not. 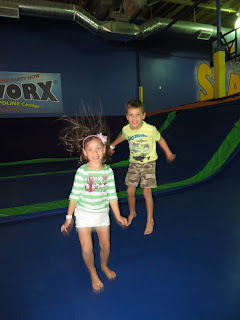 We arrived early, which meant there was no one else around to play with for the first half of our visit.  No problem! built-in playmates... 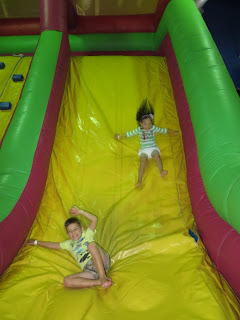 They climbed and slid and jumped without stopping for an entire hour.  Some other kids their age showed up and the two split up with their new friends for girl time and boy time.  Then occasionally they would join forces again and play like best friends do. 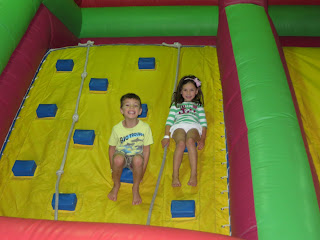 We walked between businesses and I noticed a cicada walking across the ground.  We've talked about them for months, but they hadn't seen one alive until this one.  Layla held her hand out and requested I let it crawl on her finger. 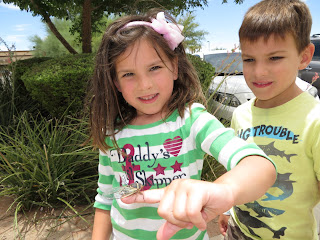 Then she asked, "does it bite?"  Her question should have been asked before allowing me to place it on her finger, but I guess that's good ole' fashioned trust in her Daddy.  Easton verified with Layla that her finger was not being eaten off by the little critter.  Then he asked to hold it.  Atta boy. 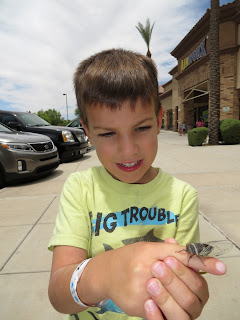 We spent every waking moment together for four full days and then we had a new challenge to tackle:  Driving to Sacramento without Mommy.  The hardest part of this challenge was packing because for the past 5 years Kendra has been the one to make a list and check it twice.  I did OK with the packing, but still forgot some basics like Easton's swimming suit.

Anyway, we hit the road at 8 AM sharp across the desert.  We stopped in LA at a poorly chosen exit and wound up at a denny's-like restaurant in Glendale, CA.  I took a quick selfie and we hopped back in the car. 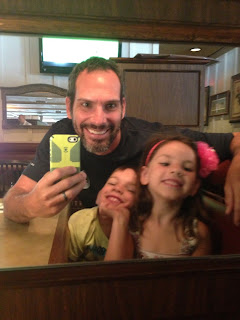 The 12 hour drive was flawless when it comes to gas, food, and pee break synchronization.  We didn't have to make a single unscheduled stop!  We hit some rain showers along the way, which broke up the day a bit.  A few minutes before arriving at Ouma and Oupa's house we were treated to a double rainbow. 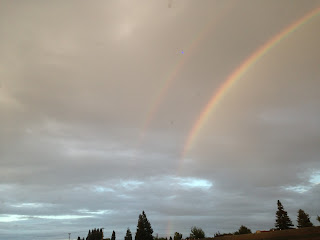 Rolling onto the driveway felt like crossing a finish line for me.  I wanted to hear some Chariots of Fire music and have an award hung around my neck for not only surviving, but thriving in the midst of very unfamiliar territory for me.  I was Mommy and Daddy for just a few days.  Although everyone can endure something for a while I have more respect than ever for single parents who do this for years unending.  God bless them for having to fill both roles.  I am grateful for the way Kendra and I are able to be a team for the twins.

And now...  time for adventures in Sacramento with Ouma and Oupa.

Glad you made it safely to Folsom. I'm proud of you for doing the single-partent stent for a few days. We are heading to Tenkiller Lake in OK in the a.m. with B.J. and Lexi. Wish you were all here to meet everyone in family. Hug Ginny and Steve for me. Love ya gobs, MOM