The last few nights have been interesting to say the least.  On Sunday night at around 3:00 AM Easton came into our room wide awake.  He said there was a bee in his room.  He was scared of it and cuddled up in bed with me.  Normally after a few minutes of comforting words and back rubs he heads back to bed.  This time he begged me not to send him back to his room.  I taught the twins to be careful (maybe fearful) of bees and wasps.  Maybe we overdid the cautious warnings.  Anyway, I walked with him back to bed and we turned on the lights in his room.  nothing there.

Back to bed I went, then 10 minutes later here came Easton again with the concern of the big bug or bee buzzing around his room.  I went back to his room and got out his bug catching net.  I said, "if you see him, catch him in the net and squish him with your shoe."

Back to bed I went, then 10 minutes later...  Kendra and I hear the bug flying around our room!  I jumped up with no contacts or glasses, armed only with a towel.  I chased it all over the bathroom and finally swatted it down.  Turns out it was just a moth. 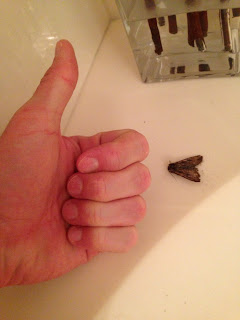 Easton came into our room bright and early (go figure) and I excitedly led him over to the bathroom to view the deceased critter.  (gasp!)  it was gone!  We were invaded by a zombie moth who's trail of moth wing dust indicates he headed towards our closet.  I hope that's the last we will ever see of the moth, but that thing caused us several hours of sleep!

We leave our bedroom door slightly cracked and have done so for the past 5 years.  Originally it was so we could hear the twins if someone cries or needs us.  Neither of them get out of bed once we put them at night except to go pee or once in a blue moon if they have a nightmare (or a zombie moth).

Last night Easton came into the room after Kendra and I had gone to bed and turned the lights off. We were um...  uh...  cuddling closely in the dark and I looked over to see Easton's shadow standing there at the side of the bed.  The lights were off, his eyes were closed and he was virtually sleep walking.  Thank God.  Kendra and I tried hard to control our laughing at the awkward situation.  We held our breath waiting to see if Easton noticed anything unusual going on in our bedroom when he came in.  After a couple of minutes of him telling us in a sleepy voice about his dreams we breathed a sigh of relief.  Mr. Inquisitive would not have let that moment go if he suspected anything was out of order when walked in.

So from now on we will lock our door.  that policy starts today!  They are old enough to knock and  wait patiently for us to come and let them in. whew!  that was a close one.

Easton is getting into Legos pretty seriously now.  He played with the transformer lego man for a while, but asked if he and I could rebuild it as a car.  So we did it together and I'm proud to say he is becoming almost self-sufficient at build some smaller items like this.  Layla jumped in the picture and photobombed our celebratory moment, but we had a good laugh together when viewing the picture. 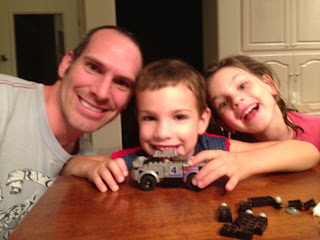 My office of 10 years is being moved.  Shrunk, actually.  Our entire floor is compressing.  After years of avoiding the incredible shrinking office phenomena which plagued every other floor and building on campus, the compression people finally caught up with us.  As I was cleaning out my office I took a picture of my eye-level shelf to show what I look at all day long.  The twins as babies and one of my favorite pictures of Kendra. When I return from sabbatical I'll walk to a different office down the row from where I've gone for 10 years.  I foresee several accidental walk-ins on whoever takes over the space where my office is now.  we are such creatures of habit...

Ten days until sabbatical!  Can you hear that? ...  That's the sound of me not caring about work anymore.  Each day my motivation to finish strong is cut in half.  I just hope I have enough gas left in my tank to even show up next Friday to work.
Posted by The Four Webbs at 11:22 PM