What a great week for the 4 Webbs!  Kendra completed her gun safety training, I'm almost fully recovered from the surgery and the twins are fully qualified as hiking buddies.  Kendra took Friday for a day-long class.  She learned how to hold a hand gun and all about the laws of carrying a firearm in the great state of Arizona.  I took a vacation day to cover the home front including taking care of Will, our part-time triplet.

I was tasked with planning our church's Men's mentoring group hike.  As a part of our fun-filled Friday we took a practice run on the trail I planned to hike with the men.  We made it to a high point of one of the peaks and they were jumping around like Rocky at the top of the staircase. 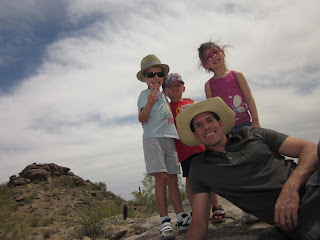 Easton's hat is straw like my cowboy hat.  He said, "we are the same now!" as we were walking down the trail.  It's hard to explain to a five-year-old that he and I are so extremely similar in looks, and personality that the hat isn't even necessary for us to be the same.  Not sure what was up with the peace sign flashing.  I think Will learned that somewhere because I know I never taught them that. 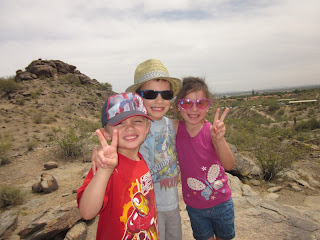 This was Will's first time trail hiking.  He did great to keep up with the twins and even led a little while. 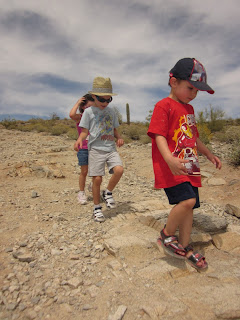 I stopped to take a picture of the most beautiful wild flower I've ever seen.  and there was also some yellow weed behind her.  Made for a great picture.  She's getting very comfortable with her model poses. 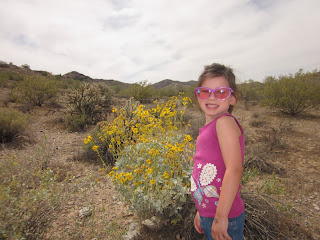 I should have turned around sooner than we did because by the time we approached the final climb out of the canyon they were all three dragging their feet and asking me to carry them.  Nope!  Time to put on their big-kid pants and push themselves a little further than they think they can go. 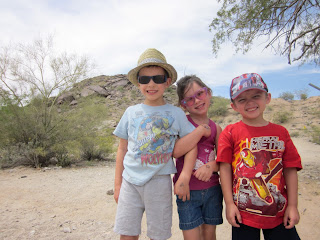 Promises of a dunk in the hot tub was enough to keep them moving all the way to the Pilot.  Layla suited up in her new two-piece swimsuit.  The Disney store had a sale and she continues to grow out of clothes.  Since we'll be vacationing heavily this summer it was time to upgrade her wardrobe. 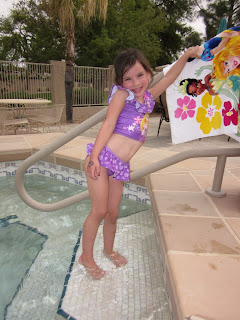 Easton and Will decided the water temperature was still a few degrees too chilly for them so they jumped out after a quick few minutes of splashing around.  The pool pump broke so we're not able to run the cleaning system or heat the water until next week.  Another $1,600 cost of home ownership coming up next week just before vacation!  Home-ownership is SO much cheaper than renting...  Glad I'm not throwing my money away on rent anymore.  Yeah, right.  In all seriousness, I'm happy we are good stewards of our money and have the funds to fix stuff as it breaks.

Anyway, the men's group hiking trip was a big hit.  We had over 30 guys go with us.  Pastor took time to give us a few nuggets of wisdom and questions to ask each other as we engage in conversation. 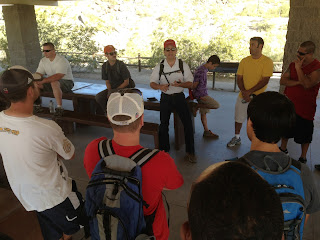 We covered over five miles.  The temperature crept up with every step, but we started so early that we left just before the sun was glaring down. 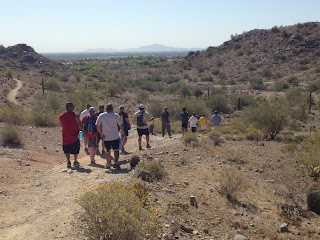 We stopped at the top of a peak for a photo opportunity and a break for the slow-pokes. 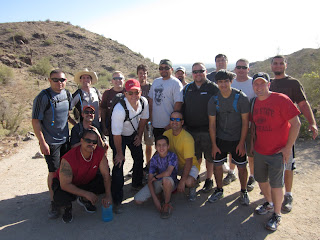 Half of the group took the long hike with us and half, who weren't physically able to go that far, took the easy two-mile hike.  We met up in the middle and finished the hike together.  Everyone had a great time during the hike and especially during brunch afterwards.  I liked getting to know some new guys and finding out who are the next prospects for us to include in our mentoring program.  I'm always on the lookout for future leaders and those who are open to being mentored. 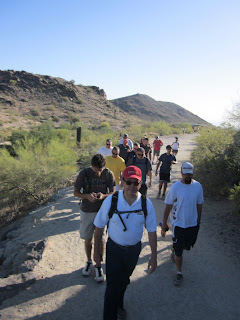 One of the questions we asked each during hike was, "When did you become a man?"  I'll save this personal story for my next blog post.

The other event we did was to see a real puppet theater.  I had no idea what to expect, but like I always say, "You can't have adventures unless you go adventuring!"  The ticket prices were higher than I expected, but the experience of doing it once was worth the money.  And the theater performed a modified version of Rapunzel. 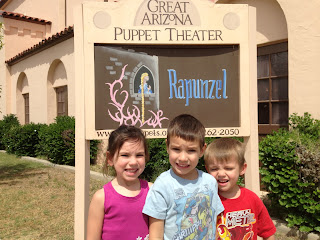 The theater seating area and stage are huge, but only a few benches lined the front where I sat.  There was a large mat in the front where kids could sit and of course the twins and Will wanted the best seats in the house. 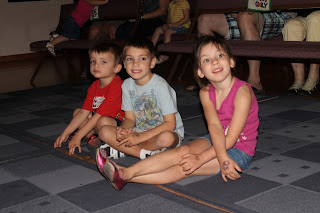 No pictures were allowed during the performance, but let's just say it was entertaining, but not exceptional.  The performance was comprised of one lady telling a story and doing all the voices except the singing.  She did a good enough job to keep their attention almost the entire time.  There were some creepy parts with the old lady stealing the baby Rapunzel and the prince's eyes filling with blood and going blind after falling from the tower into a patch of thorns (not joking).  I'm glad we went, but probably won't buy any season passes. 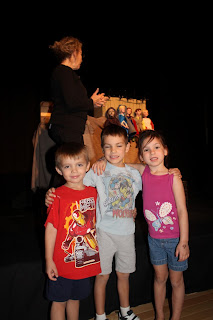 On another day at the Webb house Kendra applied her magic teaching skills to explain the concept of wind.  Layla is attempting to blow the plastic thing through the glass bottle. 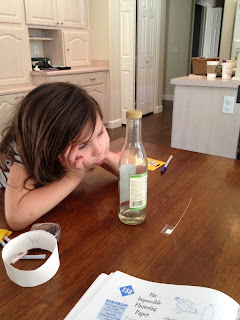 Then she gave them straws and let them roll a piece of paper around the floor. 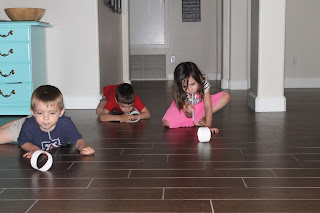 Easton is my inventor, engineer.  He just picked it up with the straw and carried it.  Smart boy, eh? 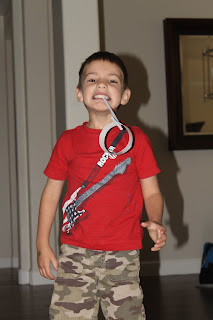 The twins are always up for a trip to wander the toy aisles of target.  This picture Kendra captured is very descriptive of their imaginative and adventurous personalities.  Layla is into acting and Easton is into superheros.  There are ways to combine the two for some good old-fashioned play time. 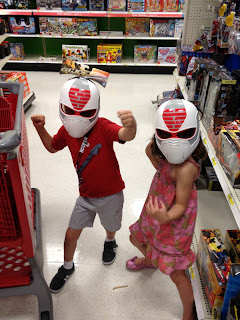 Just two more weeks of work and this guy is off for 72 days of vacation.  Can't. Get. Here. Soon enough.