One week of work left for me!  I took one final picture of me in the little workspace where I built my career for the past decade.  I do not want to have my office space compressed so it's a sad situation.  However, I'm grateful for my job and haven't complained at work one bit. 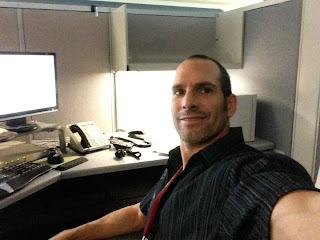 Another part of my "no worries" mentality is because when the twins start school in August I'll be able to work from home as much as I want.  The past five years have not been conducive to working from home because of the noise level and they expect me to be involved in their playtime, mealtime, and discipline if I'm inside the house.

Another milestone lately is how much their strength is increasing.  They can (and do) pick each other up and carry their sibling around the house. 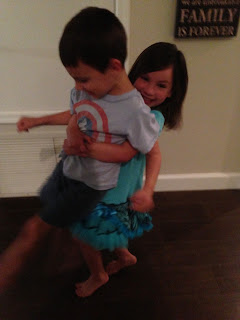 When they were babies Kendra and I would say, "show me your cute face!" and they would both tilt their heads and smile. 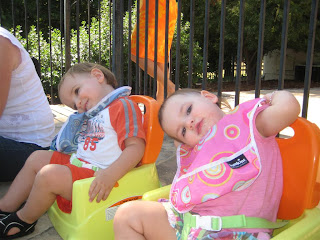 Well, so much has changed in four years compared to this updated version, but the core of their "cute face" look is still very much shining through.  Kendra and I are extremely blessed for them to be best friends. 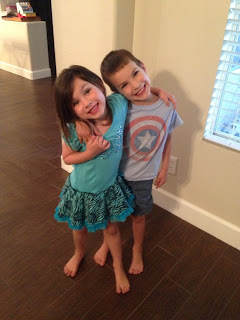 Easton's interest in Space Shuttles hasn't waned since I regretfully informed him the program is shut down (temporarily).  I showed him the Challenger disaster and explained what happened.  That didn't deter him one bit.  He is determined to fly the next version of the space taxi, whatever that is.  I often have individual playtime.  The way I start it is by asking, "You and I can do anything you want.  so what do you want to do?"  Easton's answer this day was to for me to help him hang his Space Shuttle and rocket posters above his bed.  His eyes are certainly set beyond this world. 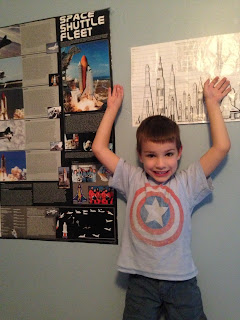 Speaking of out-of-this-world goals...  I sold my bike.  My beloved, top-of-the-line mountain bike that I owned for the past 7 years.  I'm still grieving the loss of my trusty friend on the trail, but the story is just beginning.  My passion and hobby outside of work for the past 10 years has been mountain biking.  If I could do only one single activity for the rest of my life it would be mountain biking.  I like being close to nature and God while at the same time being away from cars and society. 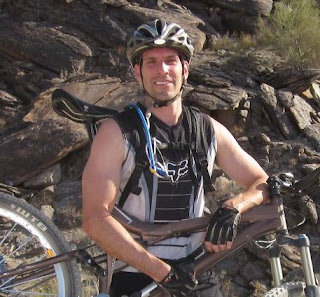 If I love to do it so much, why would I sell my bike?  The short answer is, "because God told me to".  The long answer is as follows:

Our church is in the middle of building a new facility on campus and the capital stewardship campaign (fancy phrase for a building fund drive) is just kicking off.  I'm an advisory board members, on the finance committee, and the pastor's personal armor bearer.  We've been involved in our church for 6 years now and call it home.  As you can see, we are already heavily invested with our time and money.  But that's not good enough.  pastor is looking for me to step up as a leader at a higher level.  The only way to lead is by example.  The building will go up and I'm excited to be a part of making it happen.

So what does this have to do with my bike?  My writings so far seem kind of scatter-brained, but let me pull it together.  I've been praying about how much to commit to over the next 24 months and the $ amount God put in my heart is enormous.  It will take faith and sacrifice and a miracle, but I believe.  Every journey begins with one step and selling my bike allowed me to give the entire proceeds as a first fruits gift towards our commitment.  I just put new tires on my bike and had it fully serviced by the bike shop.  But then God...  that phrase has always choked me up because the Bible is full of stories where people thought and planned one thing while God had other plans.  But then God...  told me to sell my bike and give the entire amount to the building program.  "NO!" I thought.  "anything but my bike!"  I frantically thought through the list of other assets we own that I could sell to get that amount.  Then I stopped.  I didn't ask "Why?" or try to cut any deals because I know better than that.  Then, all that stuff I've been teaching the twins for five years came flooding back into my mind:

Slow obedience is NO obedience!
Good choices lead to good consequences.  Bad choices lead to bad consequences.
No whining
You can't get your hands on something new if they are full of something old
Trust me, I have something better for you
I am a man of my word:  I'll do what I say I will do.
I own it all.  There is nothing you can give me that I don't already have (remember Layla giving me the rock?)
It is better to give than to receive.

the list goes on and on, but the revelation was so intense it's hard to describe.  I've been teaching Easton and Layla these things since the time they could understand my words.  Then in a single moment God asked me to if I truly believe the stuff I've been teaching.  Now, I get to see God as my Heavenly Father in the same way I've been teaching the twins to see me as their worldly father.  Talk about an amazing revelation!  Wow!

After that whirlwind of emotion and thought I simply said, "Yes, I will obey."  I immediately listed my bike on Craigslist around 11:00 PM.  The next morning at 7:00 AM a guy called and said he would be right over to buy it.  I was hoping SO badly that this was just an Abraham and Issac test and God would provide a substitute so I wouldn't have to sell my bike.  but that didn't happen.  I sold it and gave the entire proceeds on Sunday.

This is the empty slot in my garage I'll look at every day. 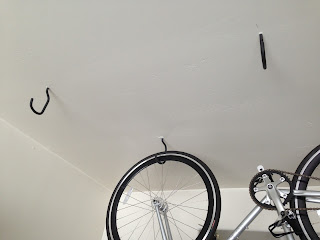 where my next bike will go.  :)  I realize this is temporary stage where I don't have a bike.  I'll get another one when the time is right.  It's an easy sacrifice knowing that my temporary loss of hobby will result in eternal change for others.  The new building will house the training center where Kendra and I will lead the "freedom ministries" training.  It will also be where the children (including Easton and Layla) will develop their foundation of who God is.  It's hard to put a pricetag on those two things, but it's worth way more than a silly bike.  When will I get another bike?  I don't know, but I'm trusting God for his favor and blessings.  So long to my bike, but I can't wait to see what God has in store for our family and the church building. 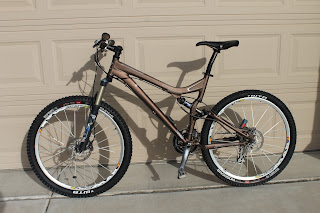 I'm also turning off my 401(k) contribution and diverting those funds to help meet my commitment.  I've been contributing 10% of my income since I joined my company 16 years ago.  Taking a 24 month break from contributing is a way for me to show God I trust him with my whole future all the way through retirement.  I don't trust the government.  I don't trust Wall Street.  I don't even trust myself.  But I know God will take care of me and my family.

The fruit is always bigger than the seed!  This is the story of my practical application, doing what God tells me to and trusting him for the future.