And so it begins...  4 Webbs, 75 days of vacation, and 100% chance of intense bonding and memories to last a lifetime.  Whatever happens, we're in this together!  If I were Fred Flintstone I'd be shouting a Yabba Dabba Do as I hear the whistle blow and slide down the dinosaur's back.  Work time is OVER!

Easton and Layla still have a tough time grasping the concept of numbers higher than 20. Even though they can count to 100, unless they actually do it, then any number above 20 is just a big number.  So I told them I have off the next 75 days they were excited, but have no idea how rare and magnificent our situation is.  Not many dads get this many days off in a row and even fewer get fully paid while doing it. even fewer get a sabbatical with no work requirements at all.  My boss called me and wished me luck on the time off.  He gave me a stern, sarcastic warning against catching me online or checking email.  Work enforces this time off for every employee with no exceptions.

I became eligible for my sabbatical over two years ago, but kept pushing it out.  Imagine the will power?  If you could take 75 days off from work at any time imagine sitting on that option and not pulling the trigger for 26 months after eligibility.  Why would I do something so obviously silly?  Well, I have two reasons:  Easton and Layla.  I want them to remember our family time together.  From what I understand of my own memories, there is nothing I can recall from when I was three-years-old, which was their age when I became eligible for the sabbatical.  I have memories from age five though!

Of all the toys Easton and Layla receive, there are very few that can compare with a big cardboard box. 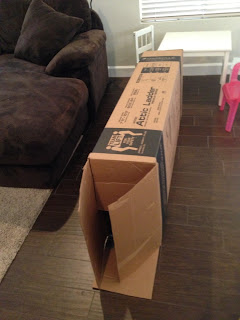 The replacement ladder for our attic came in this box and once it was empty I knew exactly what to do with it.  They've been playing in, on, and around this thing for a week with no end in sight.  Until they break it, that is.  No matter how much a toy or activity costs, it is difficult to compete with such simple, imaginative enjoyment of a box!

Easton measures my fathering ability each day by the level of playtime we have together.  If I build the biggest, baddest fort in the neighborhood, it doesn't mean squat unless I play with him in it.  We made the most of the last bits of cool weather by playing several rounds of tag out in the greenbelt. The tree was base and they were moving so fast that I couldn't get a clear picture of them. 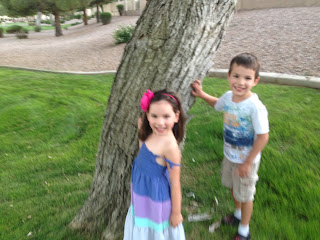 Also, I dropped my point-n-shoot camera and broke the flash. yeah, that's a bummer.  My big T3 DSLR takes great pictures, but trying to work with that monster as we run around the greenbelt is next to impossible.  Oh well, I bought the point-n-shoot off Craigslist last year and it served its purpose.  Looks like Daddy is going shopping soon because we will have ample opportunity over the next few weeks for point-n-shoot moments.

We are playing a variety of music genres around our house lately.  Layla had one of her princess dresses on so I turned up the ballerina music and twirled her around. 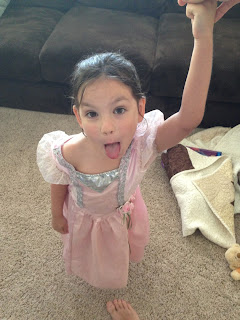 Then I turned up some dance music nice and loud.  We spun around together and got DOWN in the Webb house.  Easton wants nothing to do with dancing, which is fine.  He just finds other things to do that he's interested in while we get our groove on. 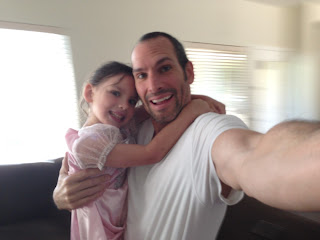 I introduced poetry to the twins fairly early.  My mom was always rhyming her stories and songs that came out of the blue.  I gladly find myself following in her footsteps.  While we are in the car traveling I'll say, "what rhymes with ...?" fill in the blank.  They take turns laughing and saying words that rhyme.  That's all well and good, but I felt it was time to start reading them age appropriate poem to really get them comfortable with it.

I found several free Kindle ebooks and loaded them on our Galaxy Tab.  I also found some online resources as well, such as this one.  Because the library children's section is organized by author (as if children give a single care about WHO writes a book).  That means there is no children's poetry section.  I think that's a shame too, but I just have to hunt around in all of the sections searching for Dr. Seuss-like rhyming books.

Day 1 of my vacation is over and I can't wait to get work out of my mind over the next few days and truly get into vacation-mode.  Bring it on!