I'm already in vacation mode with little motivation to do anything besides spend time with Kendra and the twins.  This coming week will be a test of my ability to focus on closing out work-related tasks while preparing for our upcoming trip.

The pool is officially open, but only for about 20 minutes at a time.  The 78 degree water is only 4 degrees above freezing for us Arizonians.  I was pleasantly surprised to find Easton and Layla's swimming ability came back so quickly.  Last year we spent the first week regaining confidence.  Not needed anymore! 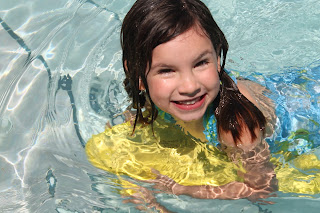 One thing I need to teach Easton fairly soon.  lighten up, dude!  He's so serious about smiling for pictures that as soon as the camera comes out he gives his most un-natural smile. 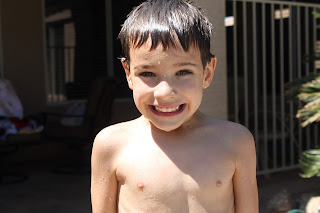 Then he comes over and says, "can i see the picture?" so he can see himself.  What a funny guy.  My favorite part of the swim was seeing the real-time overcoming of fear.  Layla anxiously stepped out to the ledge of the hot tub.  Knowing she's done this before I could see the internal struggle going on in her mind.  Something like:  I know I've done this before, but it's been a while and I'm scared.  All I had to do was put my hands up and say, "Trust me!"  and she jumped. 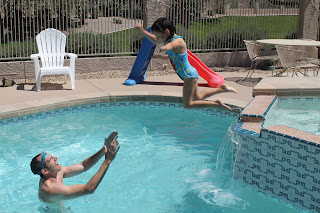 I love the way the mind of a child works.  They call me out for being a man of my word almost daily.  If I say it, I better do it.  That's the way trust works.  Easton took a little more coaxing.  After seeing Layla make the leap and hearing my words, "I know you can do it, Big Time!  I believe in you."  He made the jump too. 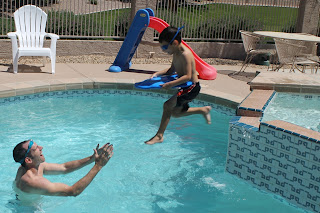 Our teeth weren't chattering, but the warmth of the towels and chairs sure felt nice after cooling off in the water.  Layla cuddled up in my lap and let me love on her.  One of those moments I wish could be freeze dried and laminated.  Then I could bring it out and enjoy for the rest of my life. 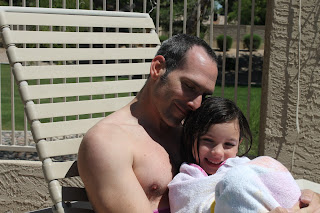 We laugh often.  I mean a LOT.  Situations that probably wouldn't be funny to anyone else we think are hilarious.  We rather enjoy it this way, too.   Especially while they are still young enough to both fit on my lap.  This is the part that won't last much longer.  They are rapidly growing taller. The growth spurts are more pronounced than ever. 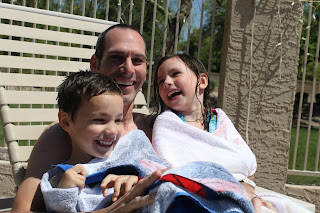 Our time at the park is getting less interactive by the month, it seems.  As soon as we arrive they head off on their own (together, of course) to play follow the leader and swing from whatever is swing-able. 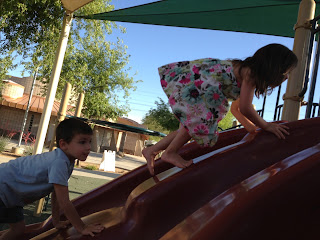 I still have fun with them at the park, but their independence is noticeably greater.  They look at me occasionally to make sure I'm still watching them show their playground skills and performing tricks.  Unlike the other 15 moms and dads, my nose isn't buried in my phone.  I've watched the self-esteem of other kids evaporate as they look for the approval of their parent across the playground only to lose hope.  Their yelling for Dad and waving arms turns into slumped shoulders and a "why bother" attitude.  That's probably the saddest thing I've had to witness in watching other parents in action.  However, I learned this lesson early and understand the value of really being there WITH them and not just because of them.

Easton and Layla think I'm some kind of a magical wizard now.  I found this picture with instructions online and saved it to my phone.  We went outside and as we lay on the ground I pulled out my phone to show them this image. 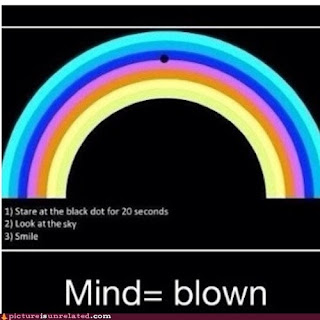 We stared at the dot, counted to 20 and then...  Whoa!  rainbows in the sky!  Of course, I told them the truth about the science behind how our eyes work.  This kind of learning is what I consider to be the ultra-fun side of parenting kids this age.