Acorn Up the Nose

I kept a secret from Kendra for a couple of weeks and it was very difficult not to spoil the surprise for her or the twins.  Uncle Casey showed up in town for a few days to visit us and some friends.  We took advantage of the quality time and babysitter allotment to have some fun together.  We took the drive up South Mountain just in time to catch an amazing sunset. 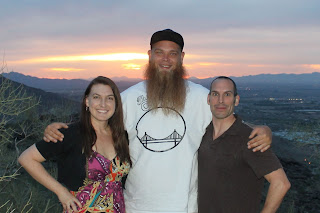 The goofy look on my face was intentional, but I hoped another picture turned out better of the three of us.  This one is it! Also, he was standing on a taller rock.  Casey is tall, but I'm not THAT short.

Kendra and I shared a few brief moments hanging onto each other and enjoyed God showing off through nature.  Was nice to be kid-less for an evening and share an adventure experience with Casey while he was here.  We went to dinner at Los Dos Molinos, an authentic Mexican restaurant, because it was on the way to South Mountain.  Almost 11 years ago I proposed to Kendra in our back yard.  Then when we went straight to a party where my group of 20 or so friends were waiting on our arrival.  They sang "for he's the jolly good fellow" and celebrated with us.  This momentous occasion took place at Los Dos Molinos.  We've only been back there once since then so revisiting our engagement night memories was a welcomed walk down memory lane. 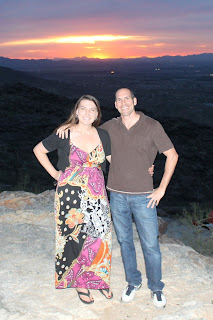 This is the best sunset picture I captured that evening.  I'm hoping to take a shutter bug friend or two sometime up here to be shown how to take more vibrant pictures.  I'll put that on my sabbatical "to do" list. 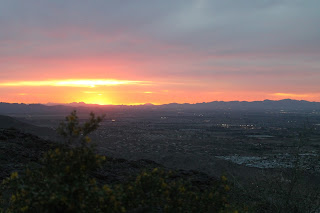 I've been recovering from my vasectomy relatively well and now the feeling is changed from being kicked in the privates to just being annoyed by the persistent caution I have to take.  I was finally able to carry Layla to bed tonight.  She's been asking me patiently each night, "can you carry me to bed yet, Daddy?"  We have that as part of our routine and I'm glad she missed me doing that while I recovered.

We went to church on Sunday and while it was uncomfortable I still managed to sit through service and get on stage to give the offering message.  The afternoon was spent birthday party hopping.  First to Pastor's house for his granddaughter's three year old birthday party.  Layla was one of the first ones in the water and wanted to keep her tiara on.  Kind of completes the Ariel swim suit and princess character, huh? 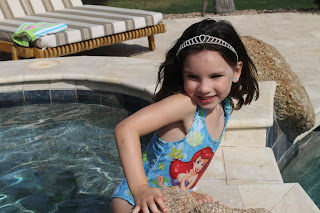 She quickly found the social friends and paddled around in the pool for the leisurely afternoon. 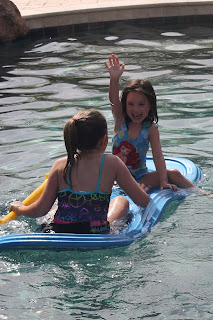 Easton found his buddies and the dare devils were doing kamikaze cannonballs into the hot tub. 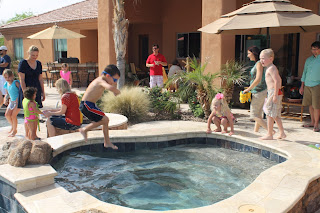 We had to talk them down from the tall water feature in the pool because they were trying to figure out how to jump from it into the pool without hitting the step.  No trips to the hospital yet for Easton or Layla.  I want to keep it that way...

As I drove to the gas station with the twins Easton was talking about an acorn he kept from church.  He wanted me to look at it, but since i was driving I told him I'd check it out when we stopped.  As I pulled into the gas station Layla says, "Easton stuck the acorn up his nose!" in her best tattle-tale voice. Then I hear Easton start to panic and realize this is not a joke.  I jump out and open his door.  His head is tilted up and I'm freaked out because if he sucked it up into his sinuses that would mean a trip to the hospital.  I peeked up his nose and could see the edge of the nut.  Whew! Then all I had to do was convince him to blow as I massaged the nut down out of his nasal passage.  That.  Was.  Disgusting. 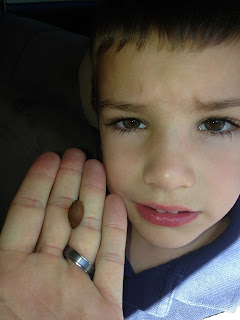 We talked in lengthy detail about the potential dangers of putting things up our nose.  Once I was convinced he and Layla caught it (understood it) then I made this proclamation: "From this moment forward we will never discuss the nut in the nose again.  Do you understand, Layla?"  She agreed and Easton agreed.  I did this because he was concerned about feeling shameful about it later.  He knows his sister well enough to know she'll tell everything to everybody every chance she gets.  If I hadn't said that then Easton would have had to relive the painful event 100 times over the next month.  I can understand that.  Nobody wants to be the butt of a joke or story even if it's true.  No guilt, no shame, what's done is done!  That's how we roll at the Webb house.

This morning at 4:30 AM Layla crawled into bed with us.  She had some bad dreams and needed a little cuddle time.  After 15 minutes or so of cuddling with me and being consoled she was ready to walk back to bed.  I lay there wide away for another hour.  I got out of bed and went to do some work on the laptop in the den.

Big Time came out of his room at 6:30 AM, which is incredibly abnormal for Mr. 7:15 on-the-dot.  He walked straight over to me and said, "did you superglue my space shuttle's rocket booster like you said you would last night?"  Wow.  He woke up early because he was excited for me to fix his space shuttle.  I forgot last night...  oops.  I asked if he wanted to go for a Daddy date to eat breakfast.  He hesitated and then asked to stay here.  Then I said, "What if I superglue the part now?  do you want to go after that?"  "YES!" he said enthusiastically.  I figured out that his hesitation to go eat was because he just wanted me to glue his rocket.  We glued it and headed out the door.

I saw an add for a Dunkin Doughnut breakfast sandwich somewhere last week and since it was close to our house we went there.  As we sat down to eat I put my hand on his head and prayed over him.  My prayer was way to long to be considered a simple, meal-time prayer, but I took the opportunity because it doesn't come along often for us to have boy time.  I prayed a special blessing of favor over him, affirmed him as a boy growing into a young man, and thanked God for giving Easton as a gift.  I watched him absorb and receive every word I spoke over him.  We ate the sandwich and then decided to eat our doughnut at the same time to show Mommy how silly we are.  I counted "1, 2, 3" and he tricked me by not putting it in his mouth for the picture. 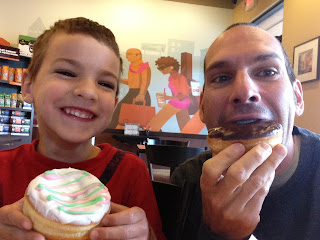 We went through this trickery cycle a few times and were laughing so hard that the other patrons were staring at us. 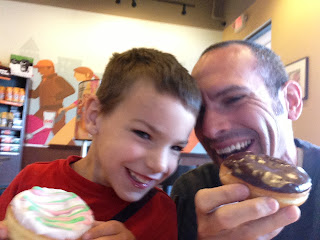 We had so much fun talking and laughing. I felt bad because everybody else slithered their way in looking like a cross between the Grich who stole Christmas and a troll.  Apparently since they didn't have their coffee yet we were a disturbance to their grumpiness.  So be it!  We got a few smiles and nods from those who's day was brightened by hearing the laugh of a child.