Today is a sad, painful day for me.  I endured a MAJOR surgery, but am safe at home recovering.  The classification as "out-patient" doesn't convey whether a surgery is major or not.  It's a major surgery because it was on my body.  When another guy goes through it, then it's "trivial".  Today will forever be known as "V-day".  Forget Valentines day or Victory day...  The V stands for vasectomy.  I had such a low number of soldiers we went through the process of IVF to get Easton and Layla.  Even so, there was always a chance we would turn into the 5 Webbs.  Kendra and I agreed on our third date that we both want exactly two kids.  That's not a typical third-date conversation topic, but it was important for us to find our commonalities in the spiritual and the natural world.

The day the twins arrived we reaffirmed our desire to keep the man-to-man defense in place.  Since them when we see other families or a struggling single mother chasing down five kids through a Walmart we would look at each other and silently smile knowing we are content with the 4 Webbs.  One pregnancy, one boy, one girl, and one sleepless year, and one diaper stage (that lasted 5 years).  Not a single day has passed where we thought, "we really need to have another kid".  Some couples want zero, some want 10 and crazy people on TV want 19.  It's all good and I don't disparage anyone for their choice for the number of kids they get.  We just know our own limits in parenting abilities and what we can handle.

Kendra consistently asked me for the past 5 years to get a vasectomy.  I outright declined and spent numerous brain cycles thinking of reasons not to do it.  Fear, low pain tolerance, unfounded internet chatter about increased testicular cancer, and all kinds of madness.  If it were up to me I would never get a vasectomy.  ever.  Not because I was unsure of possibly wanting have more kids in the future, but because I hate pain.  Especially voluntary pain where I sign up and pay someone to inflict it.  Tattoos?  No way.  I'm a wimp and I know it.

Kendra finally convinced me to do it with very few good consequences in her argument other than "no more babies and no more worrying about it!"  If you consider the average child costs about $1 Million, then paying $1,000 to avoid the cost of an additional child seems like a good investment.  I finally gave in and scheduled the consultation.  I showed up and my first question of the East Indian doctor was, "how many of these surgeries have you performed?"  He said, "Over 700.  I've been doing this for 10 years."  I was looking for excuses NOT to do this and his inexperience was off the table as one of them.  I read through the three-page informational print-off and all my myths and concerns were dispelled.

After I ran out of questions and he ran out of patience for my barrage he said, "when do you want to schedule the surgery?  How about tomorrow morning?"  Whoa...  you mean 18 hours from now?  It takes me longer to choose what basketball shoes to buy than that and this guy who I never met before wants to cut on my sensitive parts... tomorrow?  Again, I ran out of excuses why not to do it and sheepishly agreed.

I'm not a big worrier, but I hate pain and there was no way around the truth of how much a vasectomy hurts.  Kendra drove me to the doctor's office with the twins in tow.  I explained enough about the surgery for the twins to know I was going to get a shot, but that's all they need to know.

The two ladies in the room watched as the doctor started tinkering with my private parts.  Talk about awkward...  The nurse lady held a hand on my shoulder to comfort me and the other lady just stood there without saying a word, staring the entire time.   Thank God for Valium.  I popped two of those before entering the surgery room.  I can't tell if they did any good or not, but at least it was a placebo if nothing else.

I was breathing deeply and sweating like a cat in a room full of rocking chairs.   The doctor kept holding up needles, scissors, soldering iron, instruments of mass torture, and other things I just didn't have the breath to ask what they were for.  The procedure was over in 38 minutes.  It felt like 3 minutes... under water...  with a crab firmly gripping my groin.  I fractured the tibia bone in my leg once.  That hurt worse.  Other than that incident I can't remember a more painful feeling.

Yes, it sucked, but if I had to do it over again I would go through with it.  Even though I'm still in slight discomfort and have yet to enjoy any of the benefits, it's the right thing to do (for me).  I should have done it 3 years ago.  When a kid is young it's difficult to tell whether they will have health issues that may kill them.  If there was even a slight condition that could prove fatal for Easton or Layla I would continue to wait for the vasectomy.   If we lost one or both of the twins I would definitely want to try for another.  However, once we knew Easton and Layla were both healthy and had the right start in life to be happy and productive, then that should have been the decision point to have the vasectomy.

I've spent the last 24 hours following the doctor's instructions:  A bag of frozen peas resting gently for 20 minutes on and 20 minutes off.  I spent all day yesterday laying down, but this morning I woke up and cooked breakfast for the kids and I.  Kendra had some one-on-one time with a friend  so I hung out and played board games with the twins.  It's finally over and things will slowly get back to normal over the next couple of days.  I'll be at church tomorrow and back to work on Monday.  End of story.

Here's all the stuff that happened before I was rendered impotent:

Easton finally earned the right to go mountain biking with me.  He passed the three tests, which consisted of three rides through the neighborhood, canal trail, and around the duck park.  We rode part of Desert Classic on South Mountain and he loved it. I enjoyed it more than he did because I've been holding my breath for 5 years to see whether he would like something I like.  There are several things like dancing and singing that he really dislikes.  We don't push either of the twins into hobbies or activities they don't like.  Our job as parents is to bring them up in the way they are designed.  You know those pushy, angry fathers of high school football kids?  the guys who push their kids to do the thing they did or weren't able to do?  Well, that's rubbish and we are the anti-rubbish family.  My job is to help Easton and Layla discover their gifts and talents, then enable them to pursue what they want and be as good as they desire.

Anyway,  Easton laughed and screamed for joy the entire ride like it was a roller coaster.  He held on tight and pedaled with all his might. 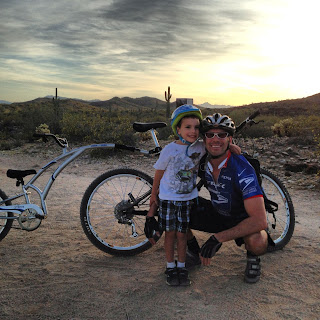 I'm excited he had a good experience and is looking forward to the next time we get to ride together. He dropped my bike after this picture and was worried about whether I would be disappointed or sad. 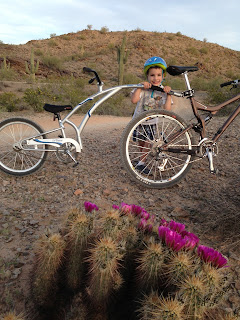 Even though the bike costs about $5,700, I just got down on his level and gave him a hug.  I said, "Daddy's not mad.  It was just an accident.  Besides, it's just a bike.  Your heart is more important than any thing, including a piece of metal."  He agreed and understood.  That moment of showing him how much more valuable he is than any thing I have was worth the whole trip.  Many more to come!

The hot tub is officially open for summer.  Today marks 25 days in a row of above average temperatures here in Phoenix.  The water is 76 degrees and the twins are loving the early swim season! 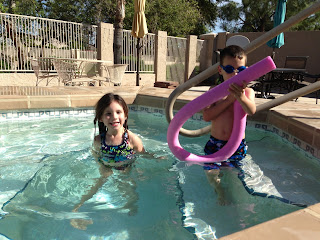 On Tuesday night I had the evening with just the twins and I because Kendra went to her Bible study ladies group.  I thought for a few minutes about what to do and remembered how Bass Pro Shops has a free kid's night every Tuesday.  We showed up just in time to watch the live feeding of the fish in the enormous aquarium.  There were about 15 kids lined up along the aquarium edge.  Easton and Layla were the most expressive with their loud exclamations and vocabulary.  A few other parents giggled and made comments to me about how lively they are.  Other kids sat there like stone statues, but the twins were doing a play-by-play commentary. 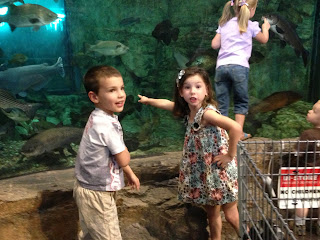 Then we went up stairs to the archery room where they had the chance to shoot a real bow and arrow.  The area was equipped with two lanes so they shot simultaneously. 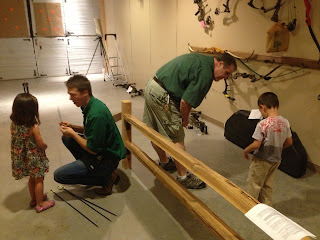 Layla took on the character of Merida.  Her eyes lit up when she hit the target. 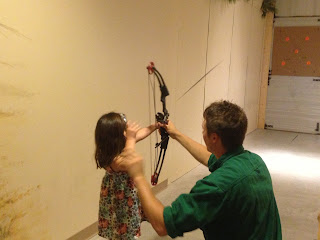 Easton was mildly impressed, but he's my "future oriented" boy.  The first thing he said afterwards was, "When can I get my own bow and arrow?"  Looks like we'll be making a trip to Dick's sporting goods soon.  They have the real-deal setups for $15 (cheapest I could find). 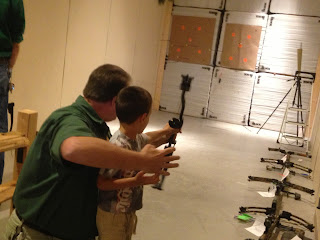 We wandered around Bass Pro looking at the stuffed animals and boats and fish.  So much to see there... It's like a museum where they sell lots of stuff. 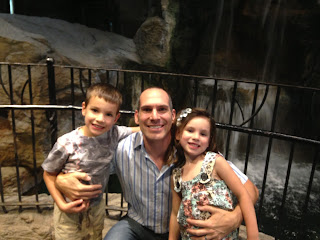 Layla picks out her outfits most days.  She wore Ouma's hand-made dress one day, then slept in it, then wore it again the next day.  At least she changed her underwear.  The hat was given to her by Aunt Mary.  She received numerous compliments during her errands with Kendra that day.  I expected the attention from other shoppers to stop after the first year or so with the twins.  People don't talk to us as much as they used to, but everywhere we take them they get lots of smiles and friendly comments. 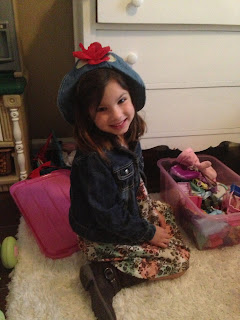 Layla decided to paint Easton and Will's face.  She got the idea from the face painting our friend Tam does.  Her creativity and artistic abilities are getting a good boost in the right direction.  Her confidence and pride in her work is increasing at an incredible rate.  Can't wait to see what she does with her life. 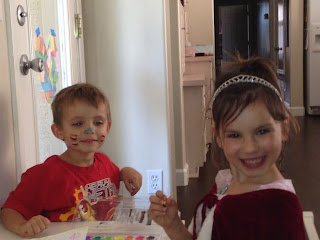