Kendra and I had two evenings this past week where both of us were home.  Inconceivable!  Yes, our week was amazingly simple with just normal work for me and taking care of the twins for Kendra.  I'm grateful for the few hours each time where we talked about everything and sometimes even nothing.

My problem is that it's so difficult to just sit peacefully with Kendra knowing we have such an extraordinary list of things to do and decisions to make.  When am I taking sabbatical?  Where will Easton and Layla go to school?  Is Kendra going to have to get a job?  Which area of ministry are we going to pursue in 2013?

Once we start to have answers for the questions above then the result is a whole new batch of questions. I'm certainly not complaining, just realizing how important next year will be.  We have so many opportunities and paths to succeed that every day is an adventure even if we don't go outside our own house.

Kendra had a kid-free Saturday morning which she filled with Zumba and shopping.  I was tasked with birthday party chaperoning for a classmate of the twins.  My friends warned me of this upcoming shift where we attend birthday parties each weekend more often than not.  Well, guess what?  It's here.  We're instituting a birthday party budget item and being selective about which parties we attend.

At this particular party I knew only one of the classmate's mother and the rest were complete strangers.  Luckily the party was fast and furious.  Layla and Easton described the 5 year old birthday girl on the way over by saying, "She doesn't talk much."  However, based on the party theme of sports it was clear she was athletic.

The backyard was set up like an Olympic event.   Easton gravitated towards the soccer kick because Kendra is teaching them the basics at home. 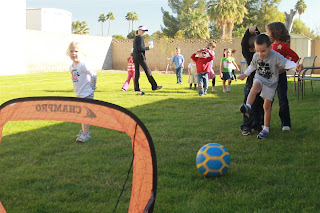 The party hosts set up an obstacle course complete with huge monster feet on a string to make big footprints. 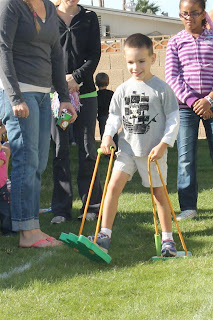 Easton was getting crazy on the sit-n-spin to the point where the referee had to tell him to move on to the next station. 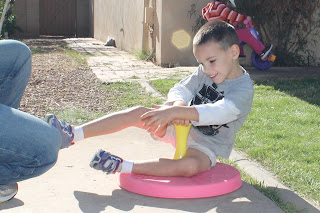 Layla did the required three spins with perfect form and then ran quickly to the next station. 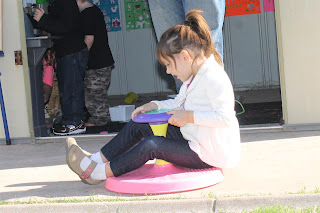 Riding the tricycle!  I could sense the high level of confidence for all of the events where she had prior experience. 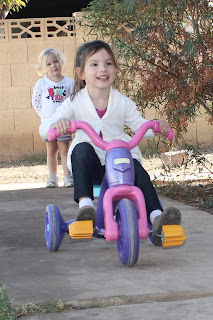 After the activities completed we ended up exactly where Easton and Layla dreamed of the entire morning:  Next to the cake.  The two of them pointed looked and even smelled the cupcakes just waiting for the word "go!"  The anticipation was so visible on both of their faces.  The cake cutting lady had to physically move them both out of the way. 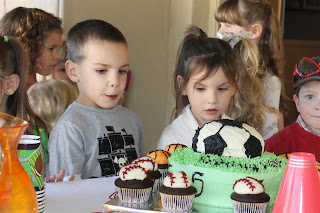 Easton had a blast with his buddies from school and new friends.  He's coming out of his shell more each day.  Socially he's always been less adept than Layla, but then again who isn't?  I was proud of him for showing manners and being friendly with sharing toys and turns. 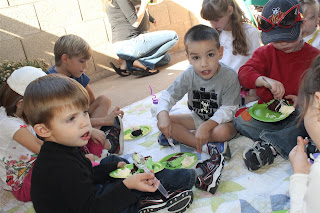 The birthday girl's parents converted a tin storage shed into the ultimate girly play house.  It was completely remodeled with a play kitchen, fake bbq, stage area (see the curtain) for shows, and all kinds of areas for the girls to paint and draw.  This girly girl clubhouse idea was the most inspiring aspect of the birthday party.  I'm already trying to figure out how I can get one of these humongous playhouse like structures in our backyard. 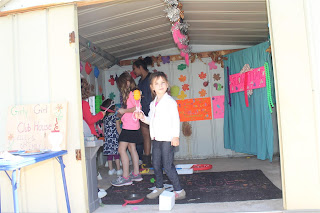 At the end of the party each attendee was called up for an official awards ceremony.  A trophy with their name written in Sharpie marker along with a medal and ribbon were ceremoniously given.  Easton grinned like a possum and Layla exclaimed, "I've been waiting for this my whole life!" resulting in a hearty laugh along with her from the entire party population. 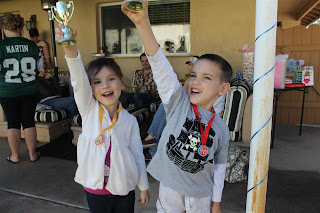 Kendra did a craft-like project with the twins by cutting strips of paper and then gluing individual rings together.  There are 25 rings and each day they rip off one ring.  This gives them a visual measurement of how many more days until Christmas. 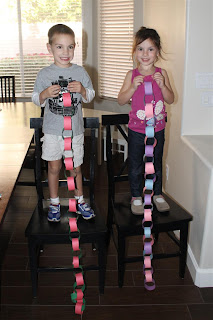 The past week was clearly the most non-busy we've had in months, but starting Monday it spins back up again into controlled chaos.  Thank God I have such a wonderful teammate to keep our family moving through the holiday season.  Kendra is my best friend and we get closer every day.