The 4 Webbs wore out Ouma, Oupa, and Aunt Judy.  They were only here a week, but we made the most of our time together.  Easton and Layla work well as fitness training weights.  one and two and one and two... go Oupa! 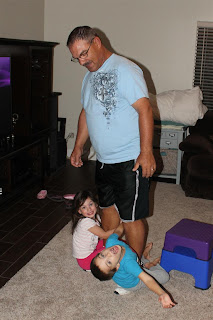 We all joined cousin Megan and her boyfriend's family for a Thanksgiving day feast.  We arrived just in time to catch the most excellent sunset and scenery overlooking the city.  I've been looking for an opportunity to get a picture of us four together.  Finally... 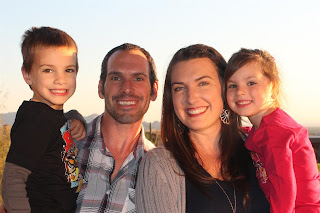 The back patio view overlooking the golf course, mountains, and city were nice, my favorite part of this picture is my family.  and the dog licking Easton's leg really grossed him out.  nice! 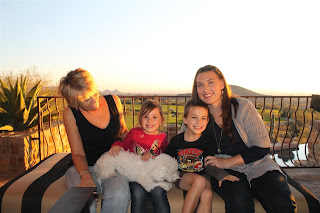 Andrew lit the fire in Easton's love of astronomy.  Easton saw the craters on the moon and things got real.  He's been talking about the moon for days.  Every night for the past few years when I tuck Easton into bed he requests the same song:  Twinkle, twinkle little star.  He just figured out what the twinkle is and his horizon was expanded forever. 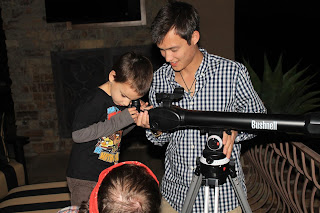 Here's the full family picture from Thanksgiving.  The evening was well worth the trip up North and the sleepy, late ride home for the twins. 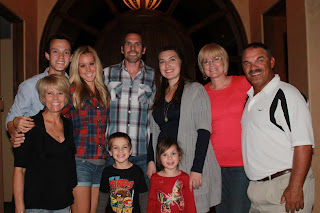 And now for my section of Deep Thoughts by Jack Handy:

Every family has values.  Values are either intentionally transferred from the parents to the kids through teaching and example or kids deduce their own version of values based solely on the parent's example alone.  Kendra and I chose to actively transfer our values and her are some on the top of the list to give a sample of what we believe is important.  These are what I call non-negotiables:

We tell the truth.  There is no allowance in our house for lying... to anyone... for any reason.  Withholding the truth is the same as lying.  Lying is punishable by any number of negative consequences including, but not limited to:  timeout for Layla in her bedroom, loss of a toy for x number of minutes, loss of a toy indefinitely (in the trash), loss of privileges such as TV or Xbox time and many others.

Conversely, telling the truth gets positive reinforcement, which is just the opposite of the list above.  We cheer, clap our hands, give rewards.

We do not pinky swear.  Somewhere along the way, other kids told the twins about pinky swearing.  The other day I agreed to something in a conversation with Layla.  She looked at me with squinty eyes and said, "pinky swear on it?"  as she stuck her pinky up in the air.

I said, "No!  absolutely not.  Am I a man of my word?"  She said, "yes, you do what you say you will do."  Then you can trust me.  Layla nodded her head approvingly and I never heard another word about pinky swearing since.

No one gets left behind.  When we are at the park and it's time to go I give a two minute warning.  After two minutes I say, "Ok, it's time to go! Say good-bye to the park and your friends."  I pack my stuff and we walk to the car.  together.  There is no counting to three.  there is no threatening of leaving them.  There is no fussing or crying.  How did we get to this state of Zen?  Very simple.  We consistently apply expectations and consequences (both good and bad).  If they obey, then they get good consequences.  If they disobey, then they get bad consequences.

The reason we never threaten to leave them is because the last thing I want is for Easton or Layla to believe for one second I would ever really leave without them.  That breeds abandonment and insecurity, instantly.  The moment they truly believe I would ever leave them stranded I have failed as a father.   Deuteronomy 31:6 says, "Be strong and courageous. Do not be afraid or terrified because of them, for the Lord your God goes with you; he will never leave you nor forsake you.”

If I want Easton and Layla to be strong and courageous, then I must be a father to them in the same way God is a father to me.  There is no place where God threatens to leave me under any circumstances.  The comfort of knowing this gives confidence and freedom and peace.  If parents will model this instead of using fear as a motivator to come along, then we will have much stronger and more courageous kids.

Seems simple, but I would guess only a very small percentage of people live life this way.  There is absolutely no tolerance for telling someone else about the offense.  We are teaching them to go to the offender and work it out with THAT person.  I'm amazed by the immaturity of people of all ages who tell other people about what someone else did, but refuse to talk to the offender directly.

That's a short list of some of the top "values" we are instilling.  it's a process and it takes month after month, year after year for them to get it, but they will!