When we have play dates where just one boy or one girl are involved, if it's a girl then Easton feels left out because Layla plays with the friend instead of him and vice versa.   We made a special play date where Easton had his friend over and Layla had her friend over.  We experienced what life would be like with quads.  The few hours together went very well, but I'm extremely glad we didn't have four at once.

Lulu is a sweet girl with the same princess attitude as Layla.  The first thing the two of them did was go to Layla's room, close the door, and get dressed in princess costumes. 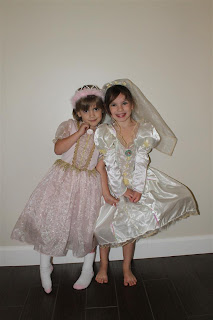 I volunteered to be the host of their tea party and Kendra was the kitchen cook.  She cut out construction paper hearts as place mats and heart-shaped paper towels for princess napkins.  I stood by patiently waiting for them to elegantly ask me to refill their cups with pink lemonade.  Layla looked much too comfortable in Ariel's wedding dress. 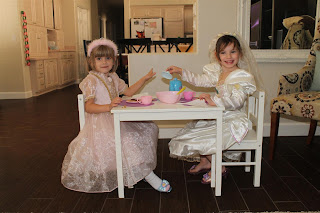 The two of them jumped onto the dance floor for some Chicken Dance and I Like to Move It.  Easton and Elliot reluctantly joined in after seeing Kendra and I dance along with them.  I was surprised by how inviting Gangnam Style is for a catchy tune. 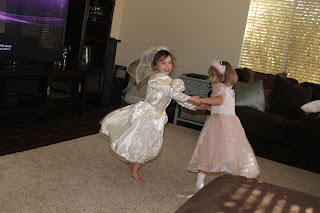 I needed to get them out of the house so Kendra could have a break so we wandered to the neighborhood park.  Easton is the playground king.  He dumped a few buckets of sand down the slide and then slid head-first into the pile of sand waiting at the bottom.  Boys will be boys. 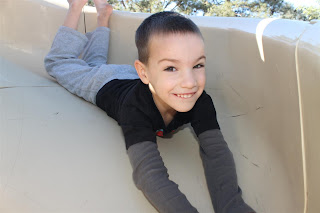 there was a long stretch where Layla and Lulu played happily together while Easton and Elliot played alone on each end of the playground.  It is common for boys to be like that, but the odd scenario is more prevalent when both sets of friends are interacting dramatically different on the same playground.

About 20 minutes into the playground time I noticed our two friends were playing kitty and doggie on their own.  Easton and Layla sat down together for some conversation and to take a break.  They get along so well together.  I get the biggest kick out of watching them sit next to each other and enjoy each other's company while at the huge park with their friends. 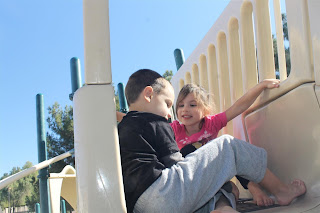 A few minutes later the four amigos were running down the hill holding hands.  I captured every moment in my mind because I know there will be a day when I won't be invited to join them for times like these. 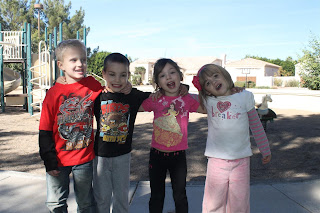 For now I'll revel in my superhero status of a Dad who can do no wrong.  I miss them terribly as I write this from the Hilton in Guadalajara Mexico.  The trip is very productive for work and quite a cultural experience. I'll have a few pictures of the completely foreign city when I get home.  For now, I am thankful for Skype and Facebook chat.  I got to see Kendra and the twins for a few brief minutes tonight.  Can't wait to get home and be with my family again!