Easton and Layla are counting down the days and marking off the calendar each morning.  Each day that passes leads to a doubling of the number of times we discuss how many days until Christmas.  I'm more excited for Christmas this year than any year in the past 20 years.  The twins comprehend enough about what's going on to make this season enjoyable for all of us.

Oupa took Easton to the driving range for golf practice.  Easton did great according to the coach.  Afterwards, the two of them arrived home and Easton crashed out on the couch cuddled under a blanket.  Layla wasn't home to harass him out of a nap so he made the most of it. 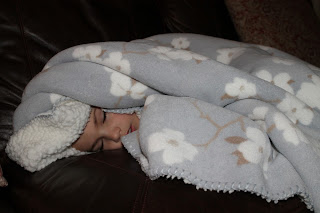 Ouma gives Easton regular back rubs and that's her secret weapon to get cuddles.  He snuggles with her and rests peacefully like a kitten getting a chin scratching. 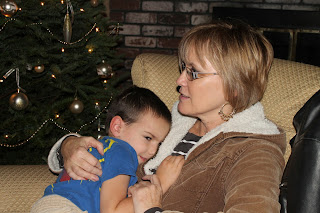 There are two water color painting sets and somewhere Layla got the idea to paint her own face.  Permission was granted by the women of the house and there you have it.  Not exactly sure what Layla claimed the mask represented, but we cheered her on none the less. 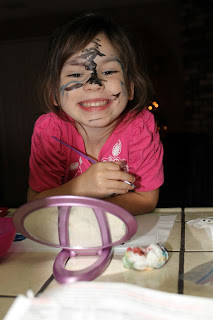 Not all adventures turn out perfectly, but we keep going on new ones without hesitation.  The Science and Space Museum turned out to be one of those events.  I didn't tell Easton and Layla exactly what we were doing because I didn't want to set the expectations too high.  The twins and I, along with Oupa and uncle Casey, arrived soon after the doors opened into a building where it seemed like a great start to a scientific adventure.  Real hissing cockroaches, a screech owl, and a tarantula.  We checked out the bat skeletons and squeezed the life-sized foam human brain. 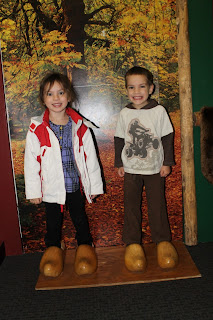 After 25 minutes of interacting as much as possible with the mostly encased-in-glass displays we decided to look for the next section.  Then we realized...  there was no next section.   that was it.  Easton and Layla began wandering the halls loudly exclaiming "is that IT?  what else can we see?"  It was a let-down to say the least.  we paid $36 for 25 minutes worth of exploration inside a small museum.  and by the way, there were zero space-related exhibits.  It's called the Science and SPACE museum, right?  That's what I thought.  Anyway, I asked to speak with the manager and expressed my dissatisfaction about bringing my astronomy-loving boy to a space museum with no space exhibits.  They promptly returned my $36 and I felt like a heel for not giving them at least a few bucks for the value of our trip there.

You can't adventures unless you go adventuring.

Easton and Layla continue their artistic training and here are two such works of art.  Easton drew himself as the red balloon between Kendra and I.  The sun is out, everyone is smiling, and I have a beard.  His name is spelled correctly with an upper case "E" and lower case for the rest of the letters.  I know it's not like a common 4-year-old in France where the artisitic expectations are much higher, but I'm proud of him for the effort. 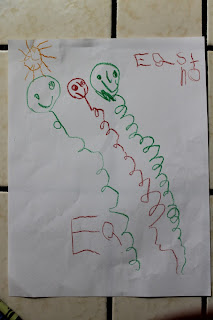 Layla started drawing first and that's where Easton got his idea from.  She added two sugar rush towers from the movie Wreck It Ralph.  The day before I drew a painting for Layla of a few balloons held by a girl.  Just goes to show you how much kids take what you give them and build their own world based on it. 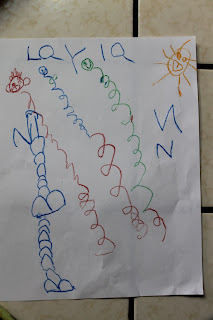 We didn't go to church Sunday.  That's right...  we slept in until 9:45, which was glorious, and then we had a pot-luck soup lunch with Neill and Jenny's fellowship.  We are spiritually drained for 2012.  This reprieve from the church world is rejuvenating and relaxing.  Exactly what the doctor ordered.  The rain and wind is a welcomed change from our dry, desert life in Phoenix.  Easton was slightly disgruntled as we discussed the previous night's sleep over breakfast.  He said the rain woke him up, but the continual downpour was music to my mid-west ears.