No More School... For Now

Today is the last day of Easton and Layla's private schooling.   They are both sad because they love school so much, but Kendra and I feel comfortable with the decision.  Last year they went three mornings per week, which cost about $5k.  This past semester we changed to only two mornings per week and that's about $4k.  We considered what our 2013 will look like financially and decided to quit school completely.  That'll save us $2k. We're preparing for a very travel-intensive and very expensive year in 2013 because of my sabbatical and Disneyland trip.  We decided school will be wholly-owned by Kendra between now and August.  She'll be responsible for the roles of: principal, teacher, nurse, bus driver, librarian, and lunch lady.

She's been doing these things already, but cutting the cord from schooling entirely is an adjustment.  Instead of her school role as a reinforcement of the concepts they are learning at school she'll take the lead.  There are many options Kendra found for curriculum in the $200 - $300 range.  That will be a much more palatable than paying for another semester of private school.  Kendra is still unsure of whether she wants to home school or not.  There is no question she can.  It's just a matter of whether she will.  The next 8 months will give her a clear answer.

As a father I am supportive of what option we choose (home schoool, public, private, or charter).  Whatever she thinks is best for Easton and Layla I'll help make it happen.  We will focus on preparing the twins for Kindergarten by getting them ahead of the curve.  It's easier to lead a race when you're not starting from the back of the pack.  There are multiple Kindergarten readiness tests, but I want them to be way beyond that low-bar measure.  I want them to be measured against the progress reports and end-of-year report cards before they ever step foot into the classroom.

I'm a big fan of Stephen Covey and his book, "The Seven Habits of Highly Effective People".  One of those habits is, "Begin with the end in mind".  so what is the end we have in mind when considering what to do about Easton and Layla's schooling?  I believe the "end" is completing college with zero debt.  By getting accepted to college with scholarships, this is possible.  The government is making sure all students end up with massive debt by giving out loans to anybody with a pulse, which drives up the cost of tuition.  I doubt this will change between now and when the twins start college.    At the current rate of increase, Easton and Layla's college education will cost over $110,000... each.  I wonder if I can save 220k in the next 13 years? Hmmmm. No.  Unless we live like homeless people and invest in a money laundering scheme.

Anyway, enough depressing future talk.  The happiness of our life today always overshadow the bleakness of the future no matter how accurate the predictions are.  The 4 Webbs joined forces with the young adults at church to serve the elderly folks during their Christmas party. 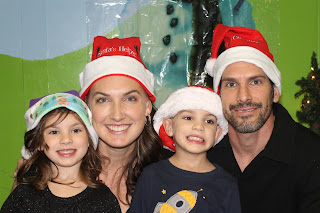 Here's the group of volunteers who served with merry hearts.  There are several other young adults we spend time with on a weekly basis, but these were the ones who willingly gave their evening to help and honor the seniors. 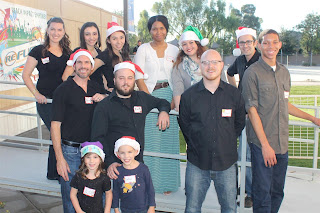 Layla and Easton helped as much as anyone.  Their smiles and conversations added an element of contagious excitement.  I took the twins to dollar store and bought them their very own Santa hat.  Easton's was bigger around than the one I was given at the party, but he was already attached to the one he bought from the store.  He'll grow into it! 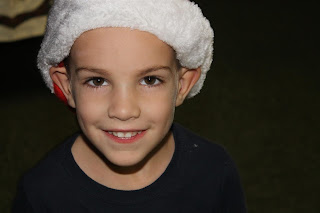 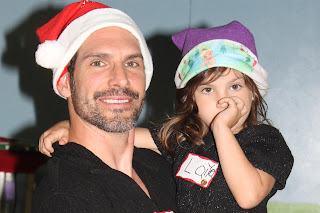 Our major role during the party was dismissing the tables to get in line for the pot-luck buffet.  We had a few minutes at each table to meet everyone and converse with them.  Then the twins loudly dismissed the table to go stand in line once it died down. 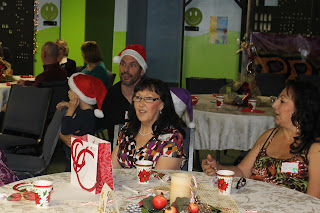 I left the party early because the twins were only good for a couple of hours.  The reason I brought them was to continue teaching them the value of volunteering and giving and honoring the elderly.  They have to see us serving or else our words are empty.  We can say, "respect your elders" all day long, but if we actively DO it and show them how, then the character trait becomes their own.  If everything we do is because we love, then the right motives imprinted on their hearts.  We give because we love.  We respect because we love.  We obey because we love.  Everything we do should be done in love, but more importantly BECAUSE we love. 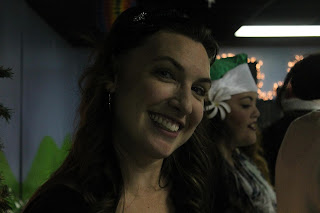 The Christmas season is officially kicked off and I'm looking forward to our adventures together.

I would be interested in knowing about some of the senior citizen activities that your church has to offer. Thurs. I am hosting 15 widow women for a luncheon. Smoked ham, potatoes and some of them are bringing other foods. We will sing carols,play games and just share together. It's lots of work but I love it. Miss you and love all the pics in latest blog. MOM