Winding Down the Year

We are already ramping up the social interactions for Easton and Layla now that school is officially over for the next 8 months.  Kendra's friend, Susanna, brought her two kids over for a play date.  The four of them had a ball going crazy around our house.  It's been a long time since the twins saw baby Harley.  She's grown up enough to be one of the playmates! 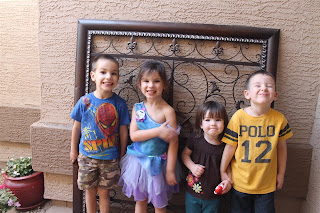 Kendra misses Susanna who is stuck on the East coast for a few more months due to her husbands job opportunity.  Kendra can't wait for their return back to Phoenix permanently next year. 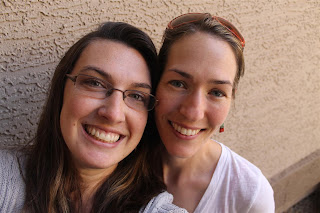 Kendra joined Easton and Layla for their last day of school on Thursday.  She got a first-hand look at their Christmas play practice.  Layla and Easton will be missed sorely because of their loud voices and in-tune singing. 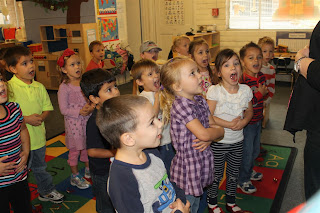 The well-behaved nature of their classroom provided a great foundation of proper etiquette in school.  They both fit in well with the kids their age when it comes to sitting still, paying attention, and absorbing the teaching. 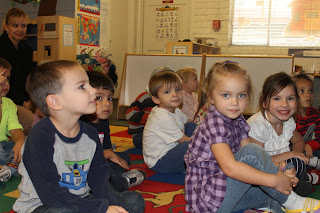 The good-byes were long and difficult for everyone, but the twins gave out lollipops and many hugs to their classmates. 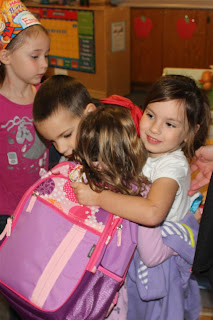 Their teacher, Ms. Neal, did an awesome job of teaching and we will be forever grateful for how she poured into their lives.  She cried a little and made Kendra promise to bring them by occasionally.  Such a sad time, but the twins both adjusted very well to the idea.  Especially with our trip to Sacramento coming up soon. 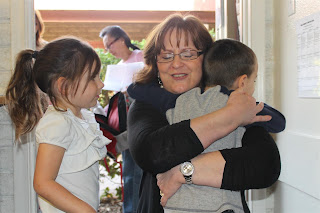 Our neighborhood really does the Christmas decorations well.  The biggest display is complete with a toboggan photo opportunity, which Easton and Layla acted very well for. 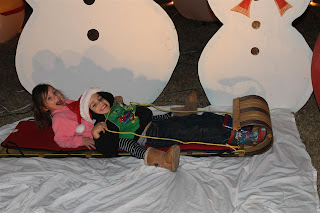 The sleigh was open and available for pictures so we took full advantage!  Everybody smiling and looking at the camera.  These used to be rare moments a few years ago, but the older they get the more frequent the successful picture become. 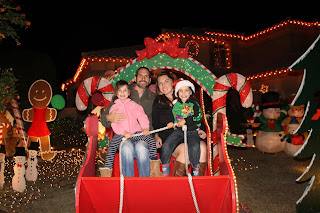 Our friends brought their twin boys over for walk around the neighborhood.  We took a stroll in the crisp night air to admire the displays while getting in some exercise.  I even had to wear a light jacket (brrrrr)!  We attempted a group picture with the two sets of twins, but this is as close as we got to a usable picture.  Two seconds later we had fighting, crying, apathy, and mean faces.  As parents we tried our best not to laugh because the moment was classic humor. 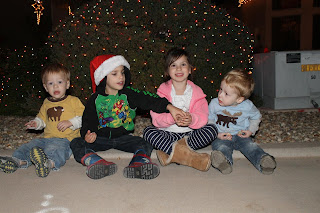 Easton and Layla are more curious than the average kid.  They want to see, touch, hear, smell, and taste everything they come into contact with.  The lit candle display in a neighbor's yard caught their attention for some reason.  I prepared my camera and they joined hands on both sides of the candle without me even recommending it. 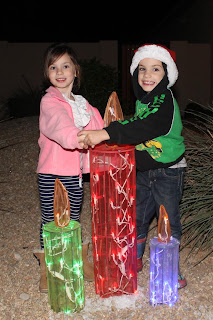 Speaking of the five senses...  I decided to get this "home schooling" gig up and running ASAP.   I heard on the radio about the AZ balloon festival and immediately set out to make plans for us.  Kendra was at a church function which gave me some Daddy time with the twins.  10 bucks for my ticket and two kids for free.  That was a small price to pay for an evening of awesomeness.  When we arrived there was one lonely balloon lighting up the evening sky as it sat motionless on the ground.

Every few seconds the balloon operator would fire up the flames to heat the air in the balloon.  The kids would approach the basket like animals stocking prey, but when the fire would blow up into the air they would all run away and scream like they were being chased by a bear. 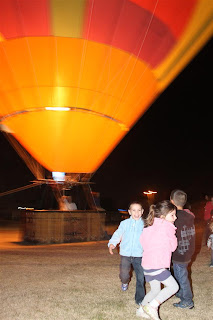 Then we walked around to watch each of the 9 balloons go from the back of a trailer to being rolled out across the lawn to being filled with air and floating overhead.  The twins were amazed and impressed with the whole experience. 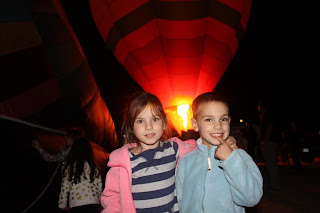 The questions never stopped from the moment we arrived until the moment they fell asleep that night.  I answered everything I could and searched the internet for answers to the questions I didn't have.  We had an outstanding week together and it was surprisingly low-key since we are dis-engaging from all the ministry involvement for the holiday season.

I'm rotating off the advisory board of our church after two years of serving.  It's mandatory according to the bylaws for board members to take at least one year off after serving two consecutive years.  The only reason I'm stepping down for a year is because it's mandatory.  Otherwise, I would stay on the board as long as I was allowed.  This role is where I feel useful and the most effective.  Even so, my other responsibilities will continue at whatever pace Kendra and I agree:

and a couple of other roles that escape my mind right now.  As you can see it's not like i'll be sitting idle in 2013. On the contrary, I'll be shifting my focus to support Kendra in what she will do as well as whittle down the list of my responsibilities to a list of roles that I can juggle while continuing to do them with excellence.

Next year is looking very promising.  Kendra and I are looking forward with anticipation to what God has in store for us.