I'm a day late in closing out the year, but this will give me a fresh start for 2015.  We ended 2014 on a highlight worthy of it's own post, but since I have so much to pack in here i'll just call it out first and get on with it.  The twins went from riding a bike with training wheels to riding a bike with no pedals to riding on two wheels all within 48 hours.  Layla received her big girl bike on Christmas day while Easton has had one for over 6 months but never rode it.  Oupa and I prepared them ahead of the Christmas day reveal by removing the cranks and allowing them to scoot around on their bikes to get the hang of balancing.  Oupa took Layla out to the driveway 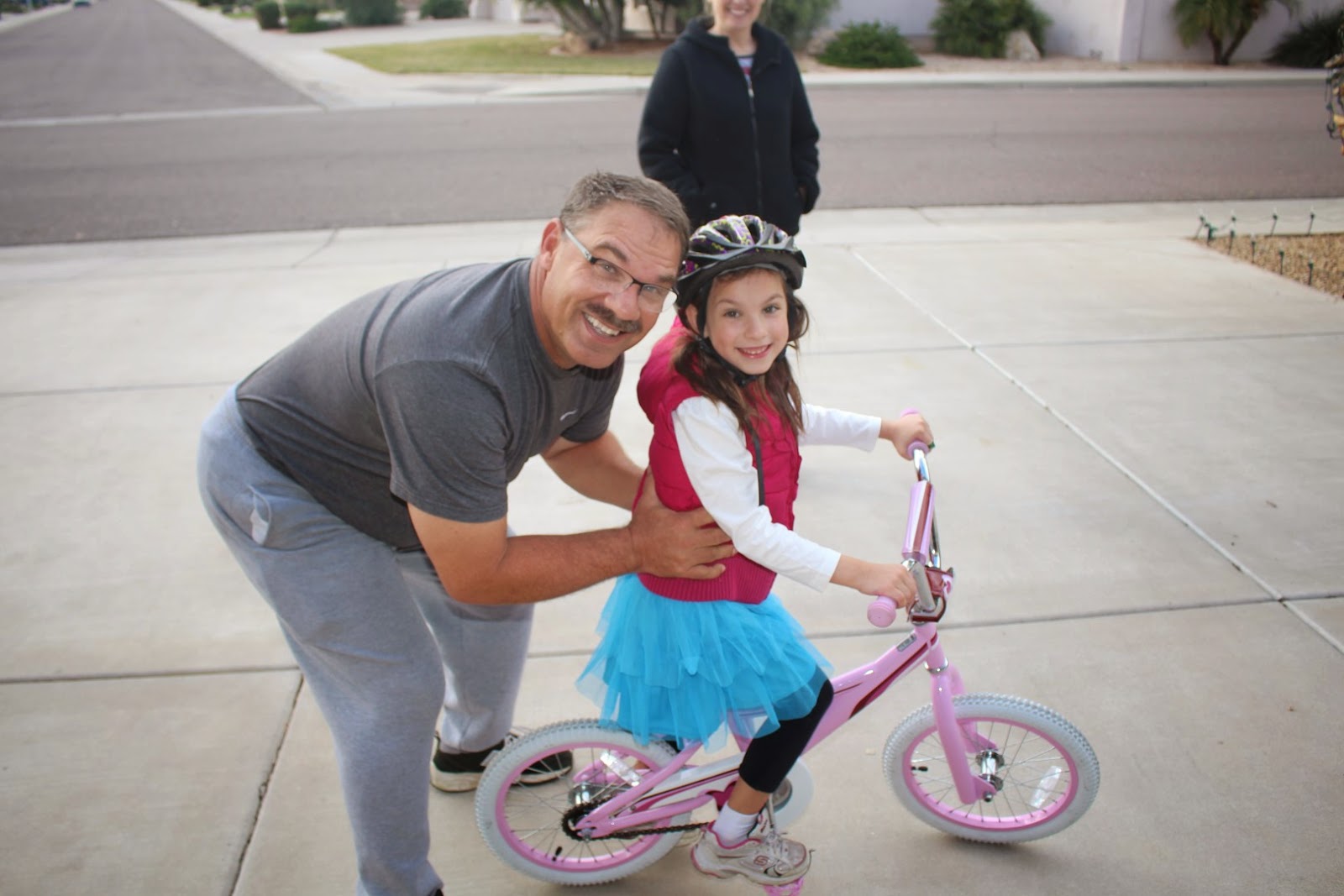 Within a couple of minutes she was pedaling her bike with no training wheels! 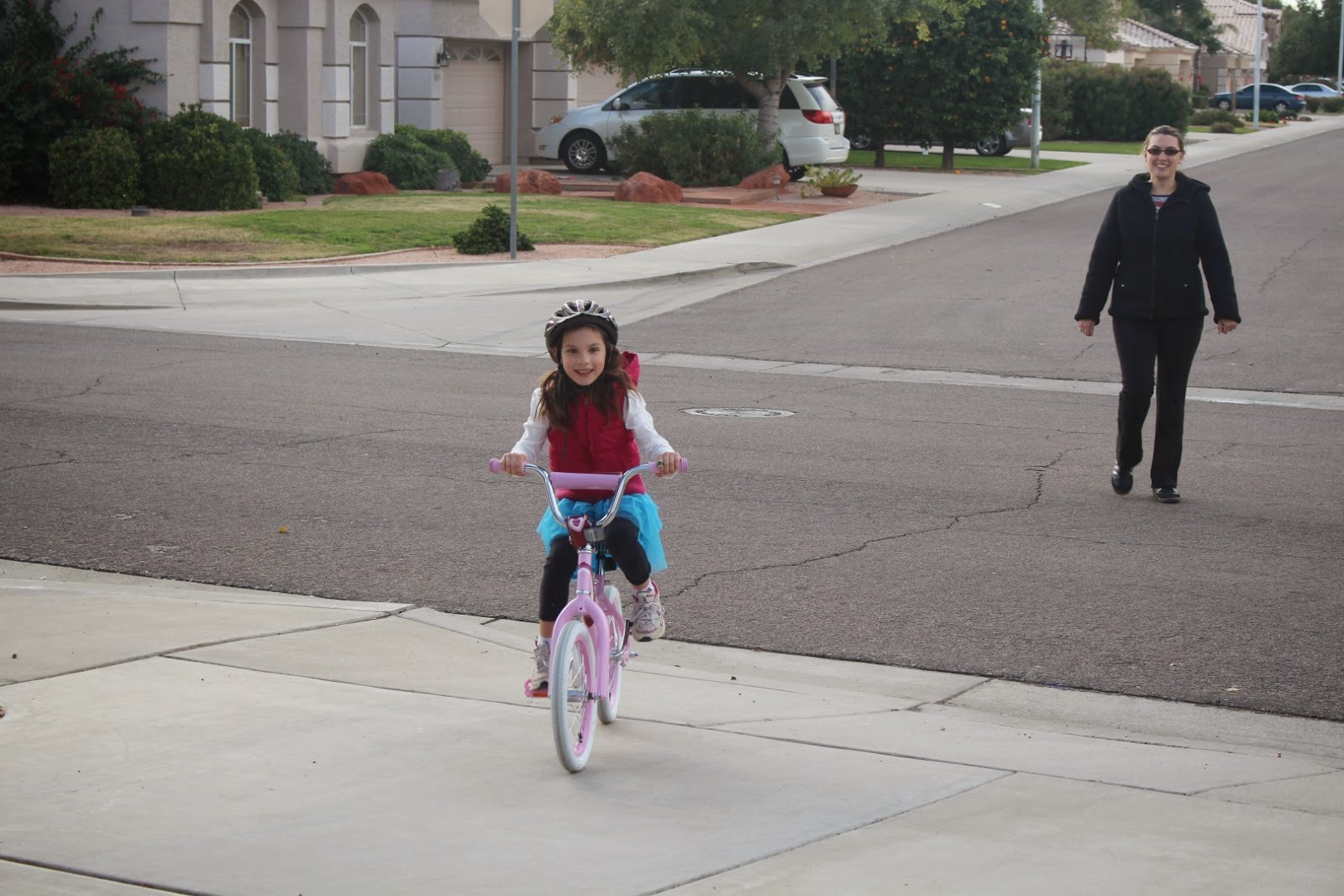 Easton saw Layla's quick conversion and excitement.  That was enough for him to believe he could do it also.  a few minutes after this moment above Easton stepped onto his bike and was pedaling with no problem.  I am excited to announce that the 4 Webbs are done with training wheels forever!

This two-week break from school and work included many games.  card games, board games, football games, and more.  One of the new gifts for the twins is Battleship.  The old game I played many times with my own brother 30 years ago hasn't changed much. 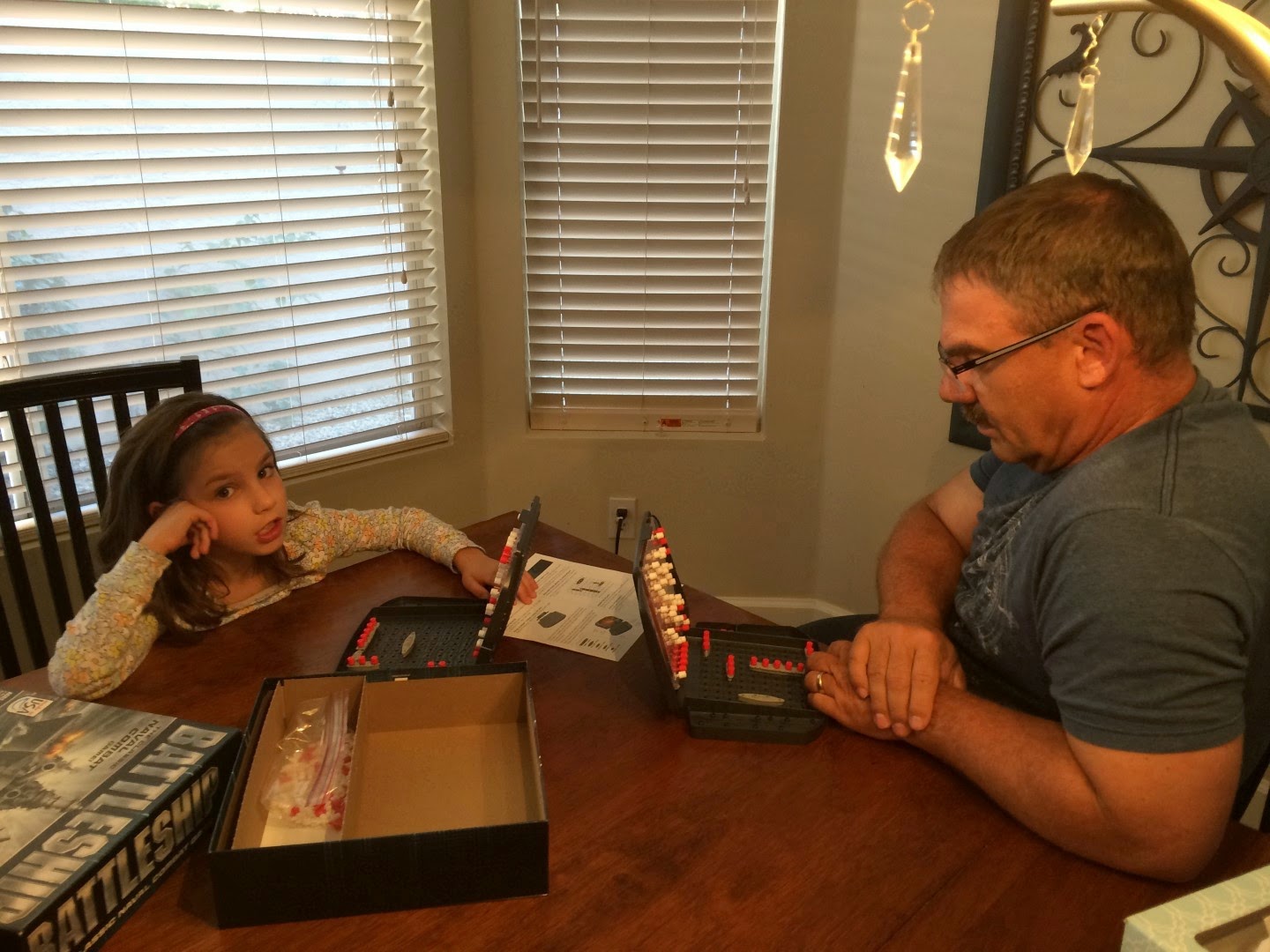 Layla seems more interested in the strategic process required to play this game.  She is also more competitive than Easton, which made her a formidable opponent. 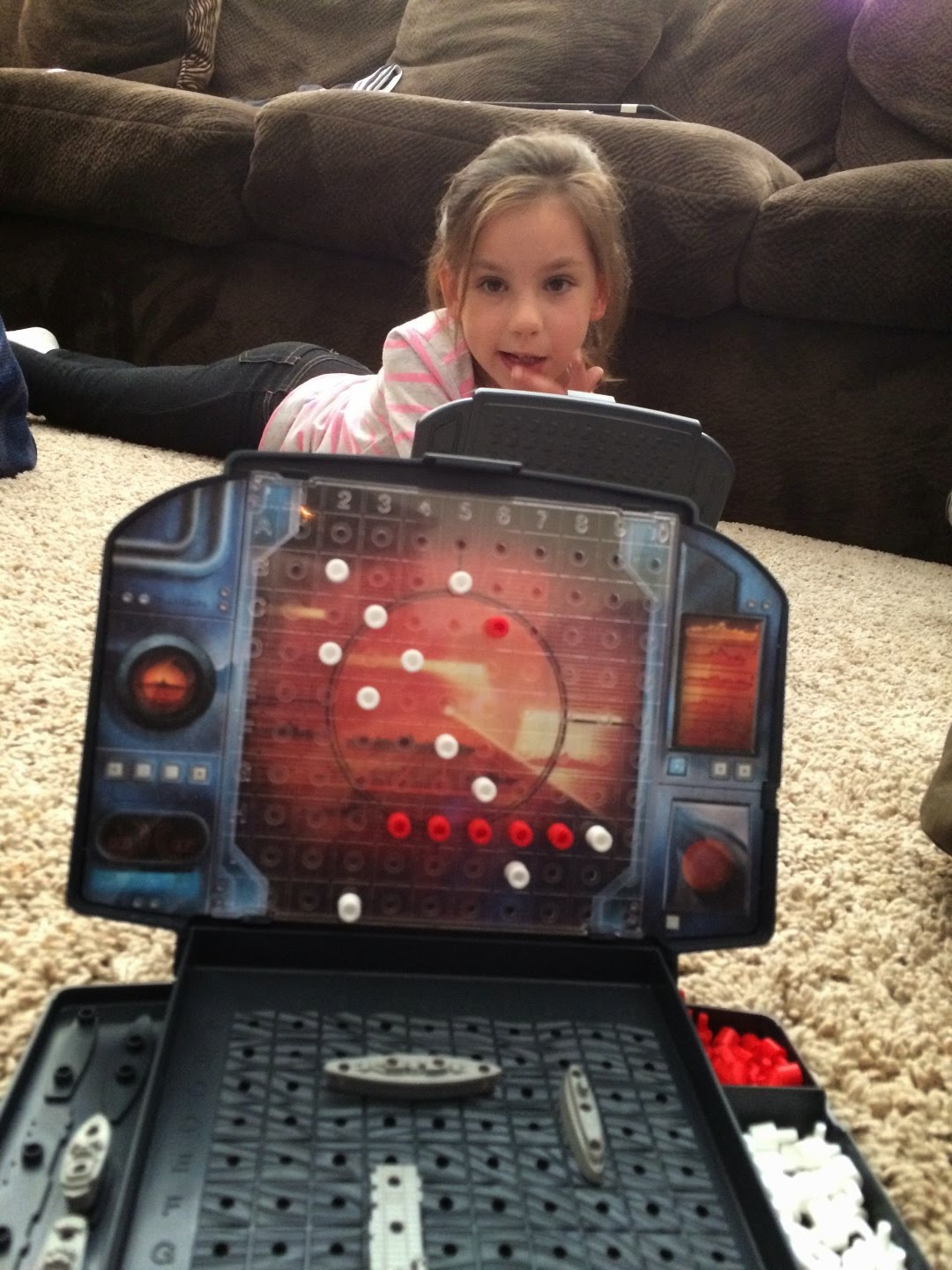 The twin's bed time routine is captured pretty well in this picture of them brushing their teeth.  I have no idea what Easton is saying "yes, sir!" to or why Layla looks so tough, but it sure makes for a funny picture. 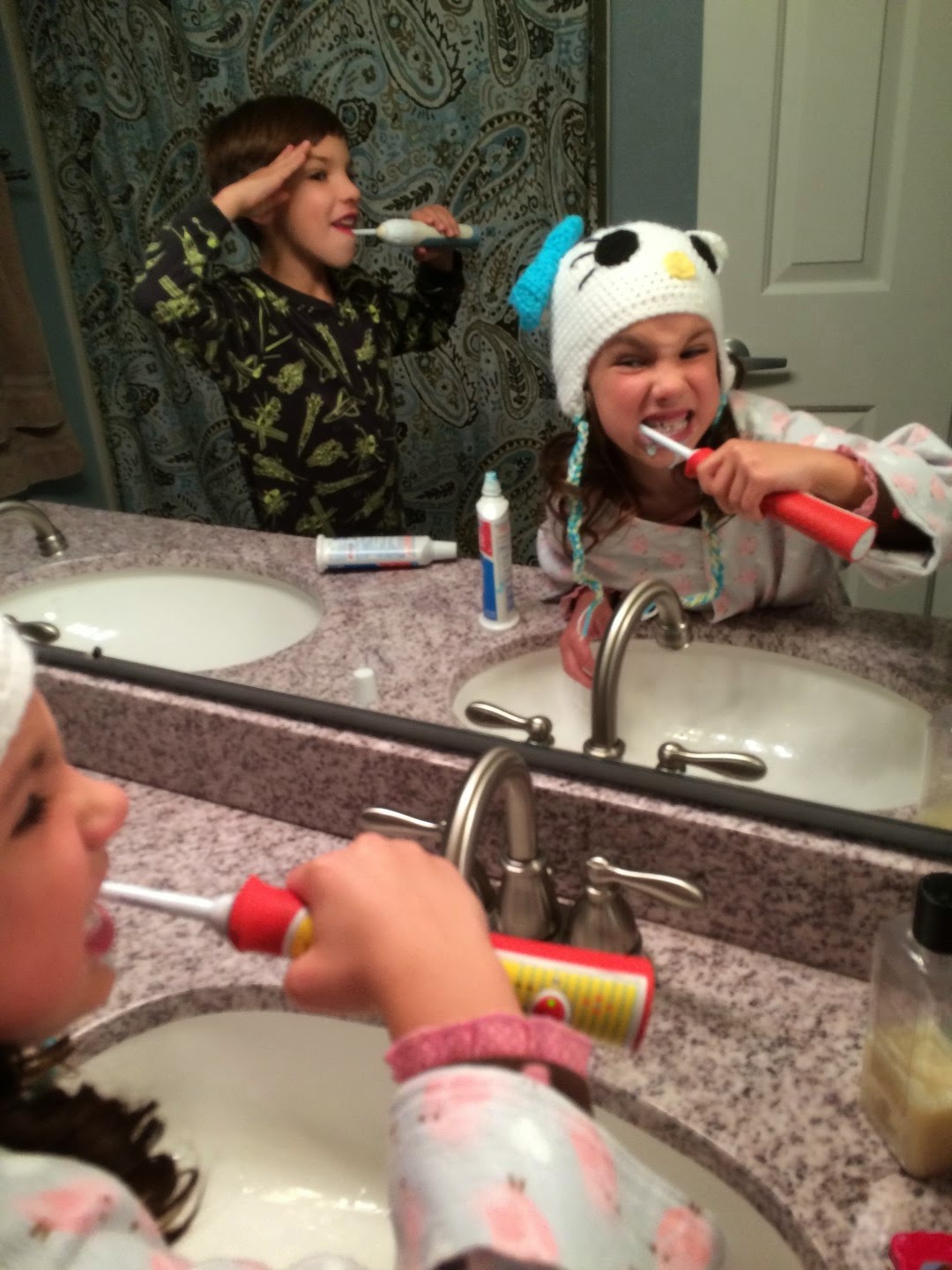 I've been sick on and off for eight days now.  During one of my better days I took a casual mountain bike trip with my friend and his two kids.  It was their first time riding on the mountain.  I really enjoyed being their tour guide on South Mountain for a short run. Nobody was injured and his kids had a great time.  I call that a success!  His kids want to go again sometime so that's a good sign. 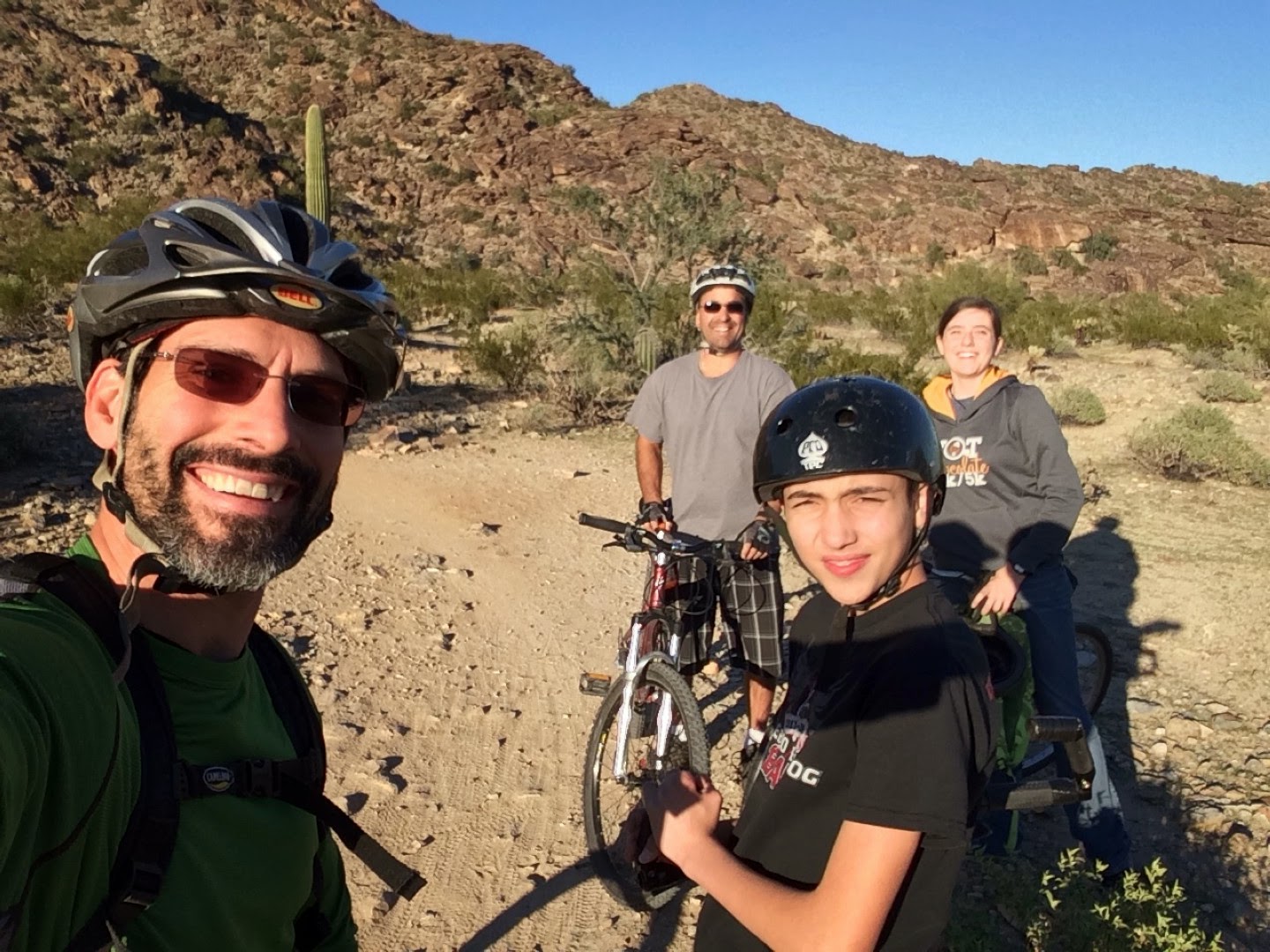 Back at our house Easton and Layla had a play date with our other friend's kids.  We heated the spa to get a taste of summer time fun during the Christmas season.  Kendra's strategy was to allow the two boys to play separately from the two girls.  She's a smart mom. It worked out much better than throwing all four of them in the hot tub together. 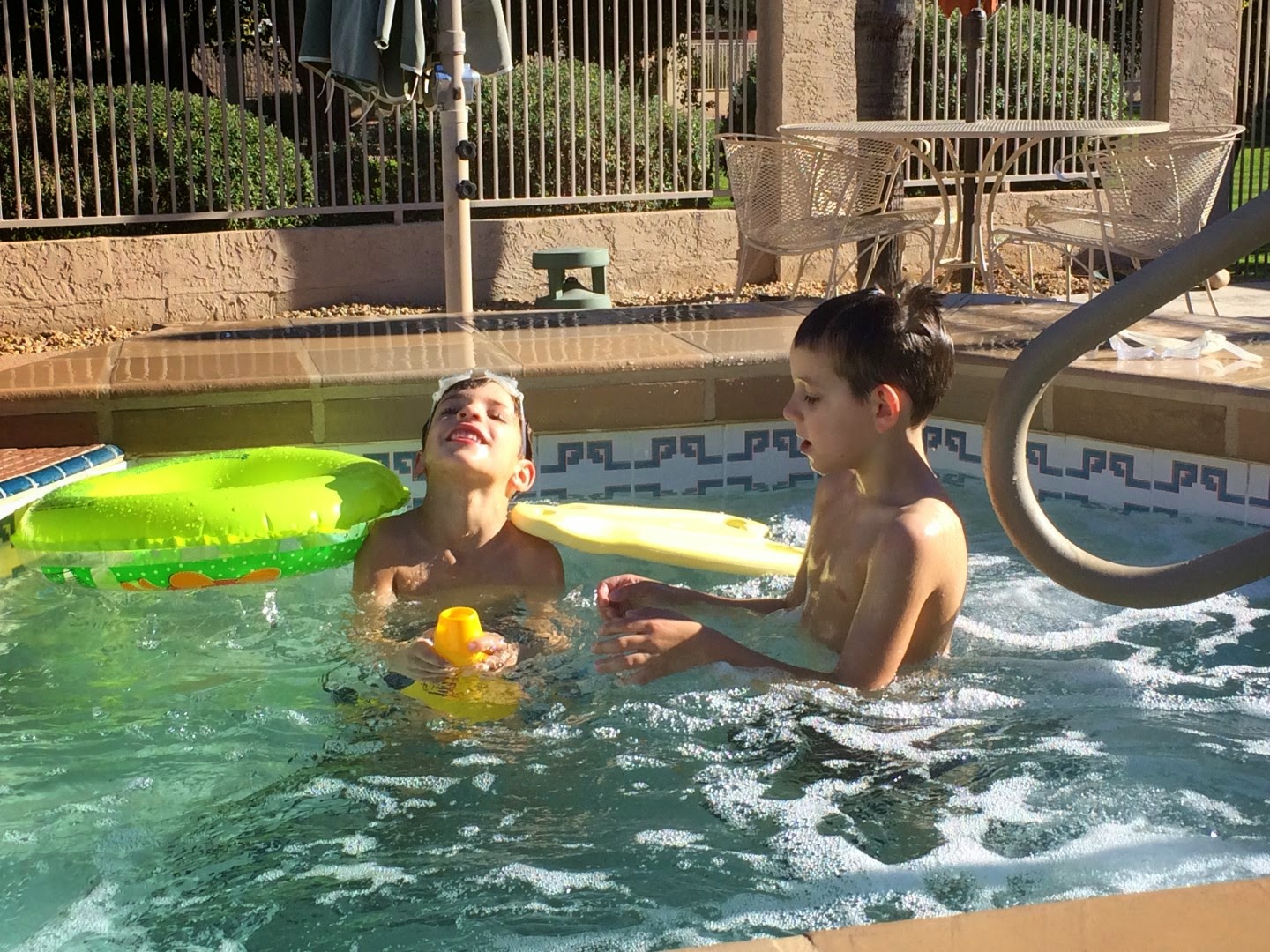 Meanwhile, inside Layla was playing dress up and sharing her new Hello Kitty makeup set she got for Christmas from Aunt Joanie. 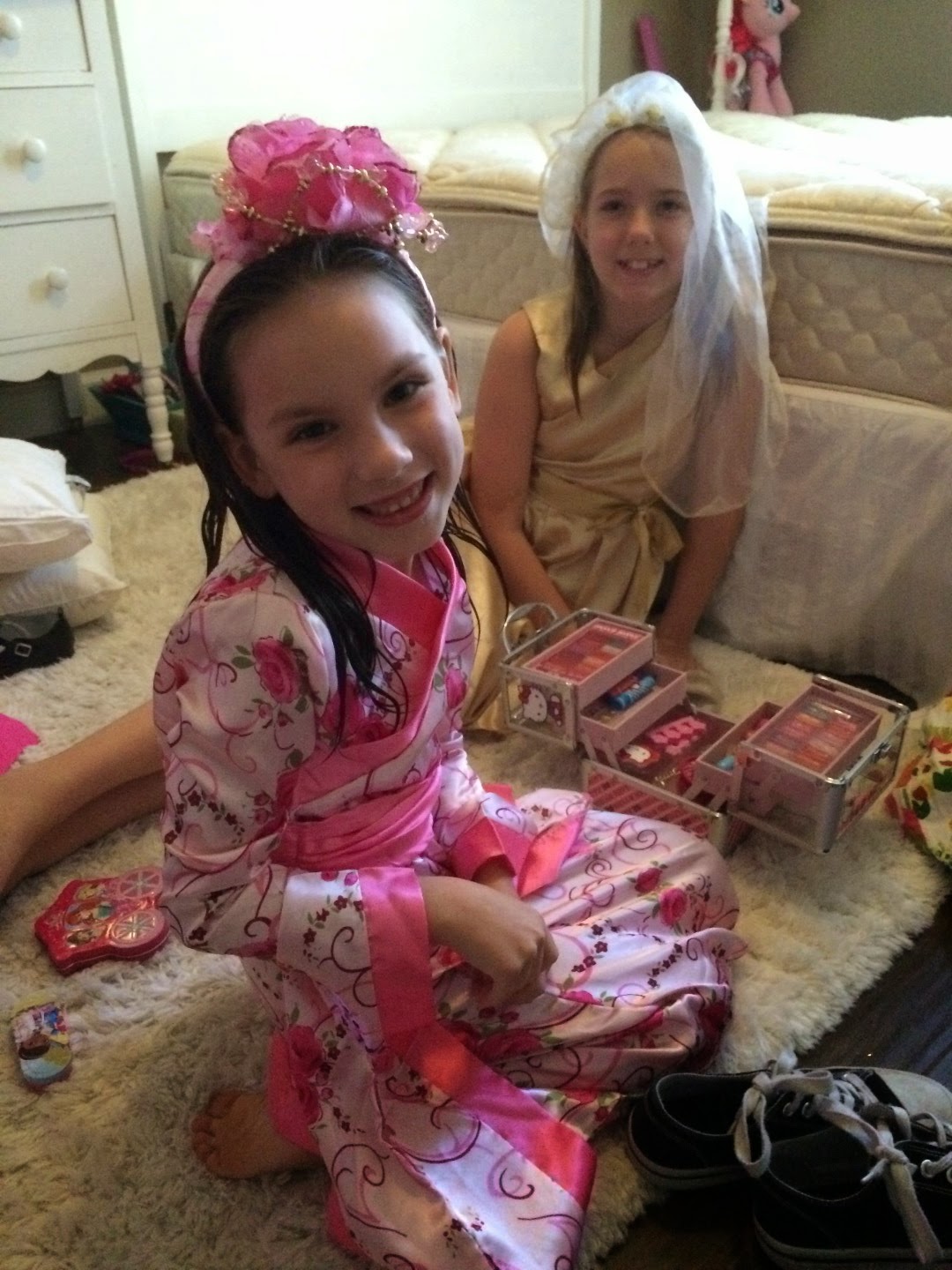 Layla spent several minutes explaining each item in the makeup kit and what it is used for.  I think she's a little too young to be so excited about makeup, but then I see other kids around town her age and notice they are all into that kind of thing. 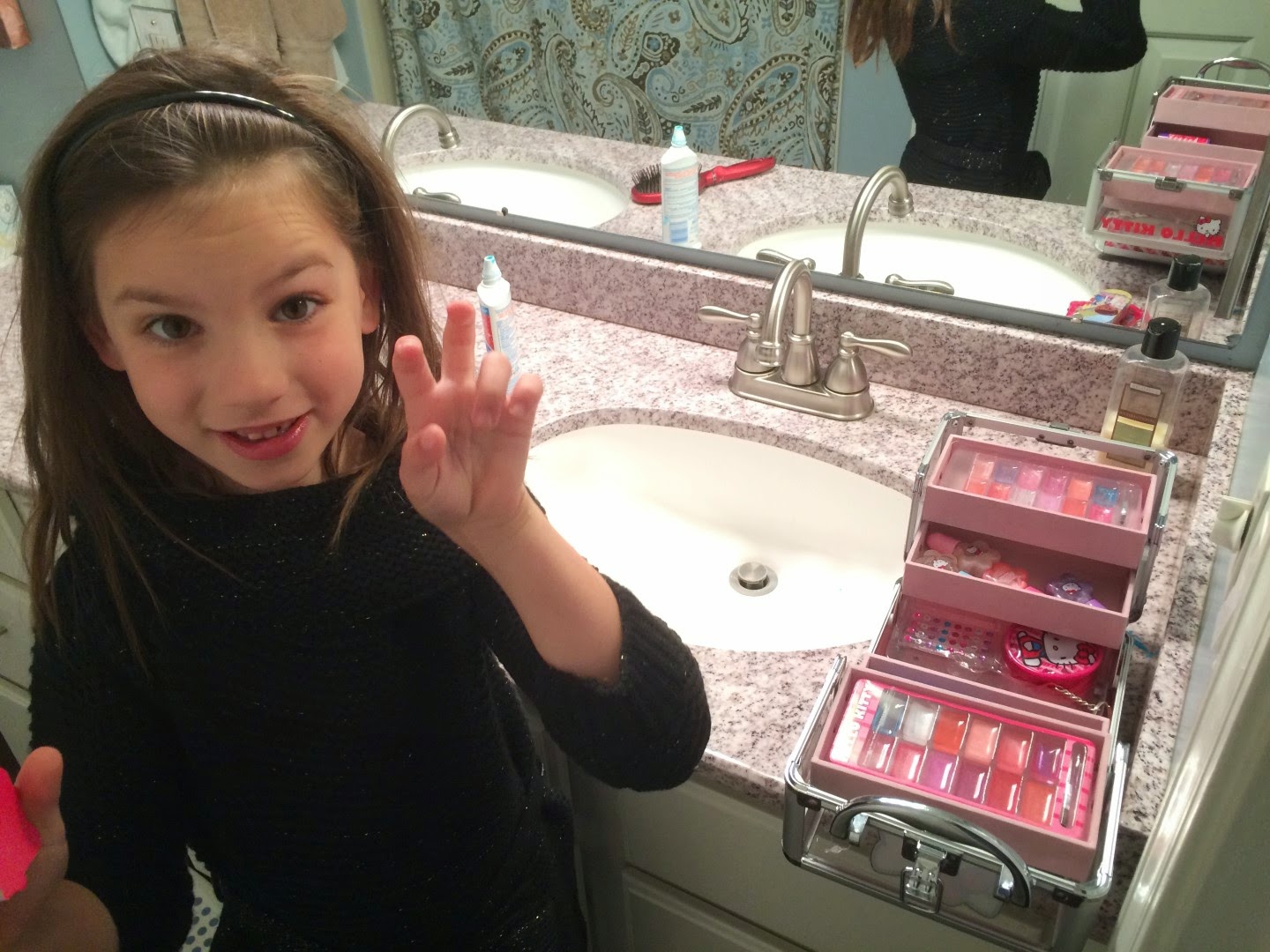 The 4 Webbs went to their house a few days later for dinner and hanging out.  They have lots of instruments and audio equipment.  We were treated to a karaoke version of "The House of the Rising Sun" with Layla playing the bongos. 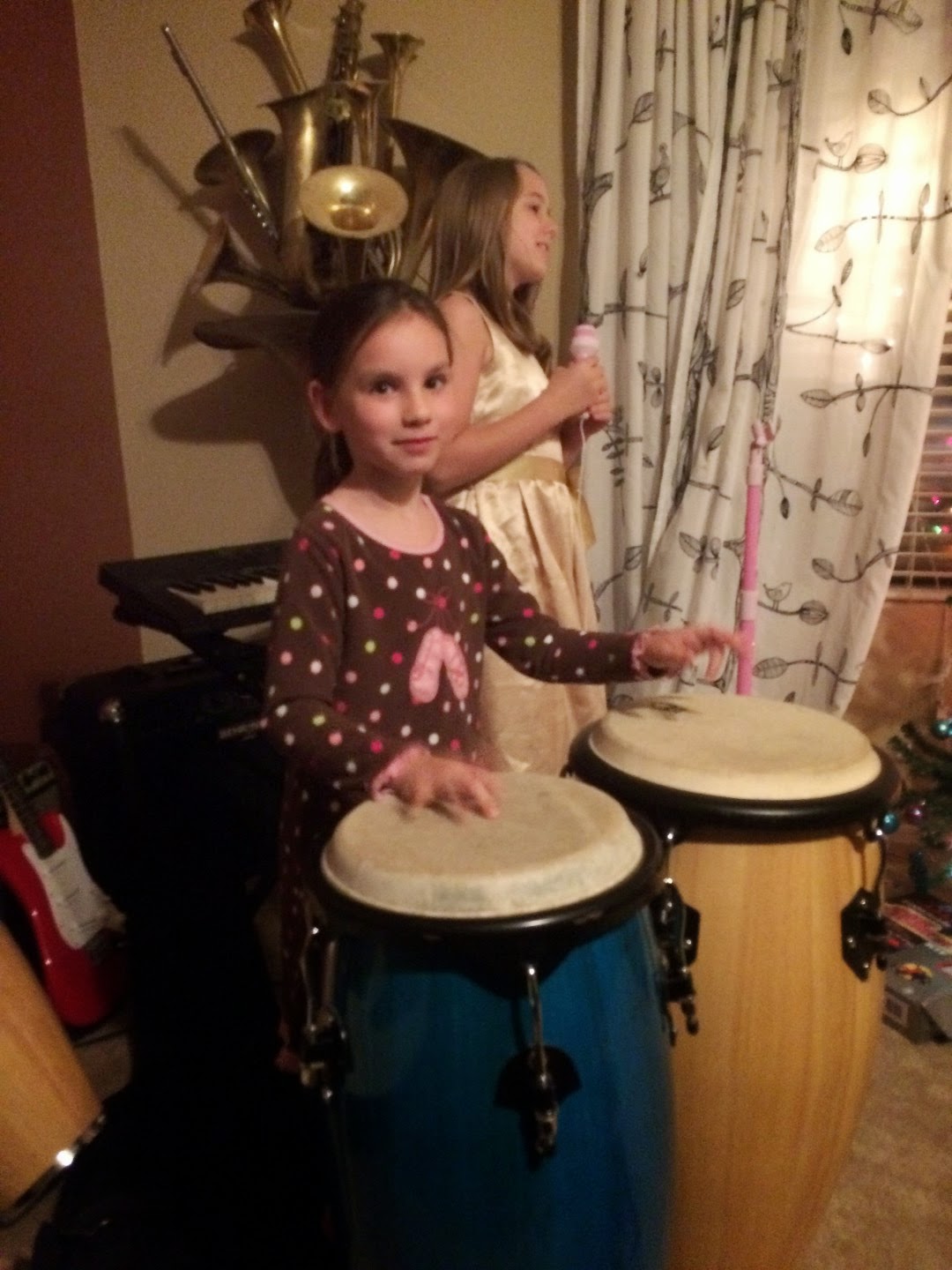 Back to Christmas morning...  Easton's most anticipated gift was the Lego Titanic.  We gave him a blank marker board and said, "draw something Christmas-y".  The result was this...  See the people plunging to their death off the back of the ship?  Well, Easton is more than happy to tell anyone who will listen about the event in great detail.  I had no idea his artistic talents were so deep until he had the chance to draw something he was passionate about. 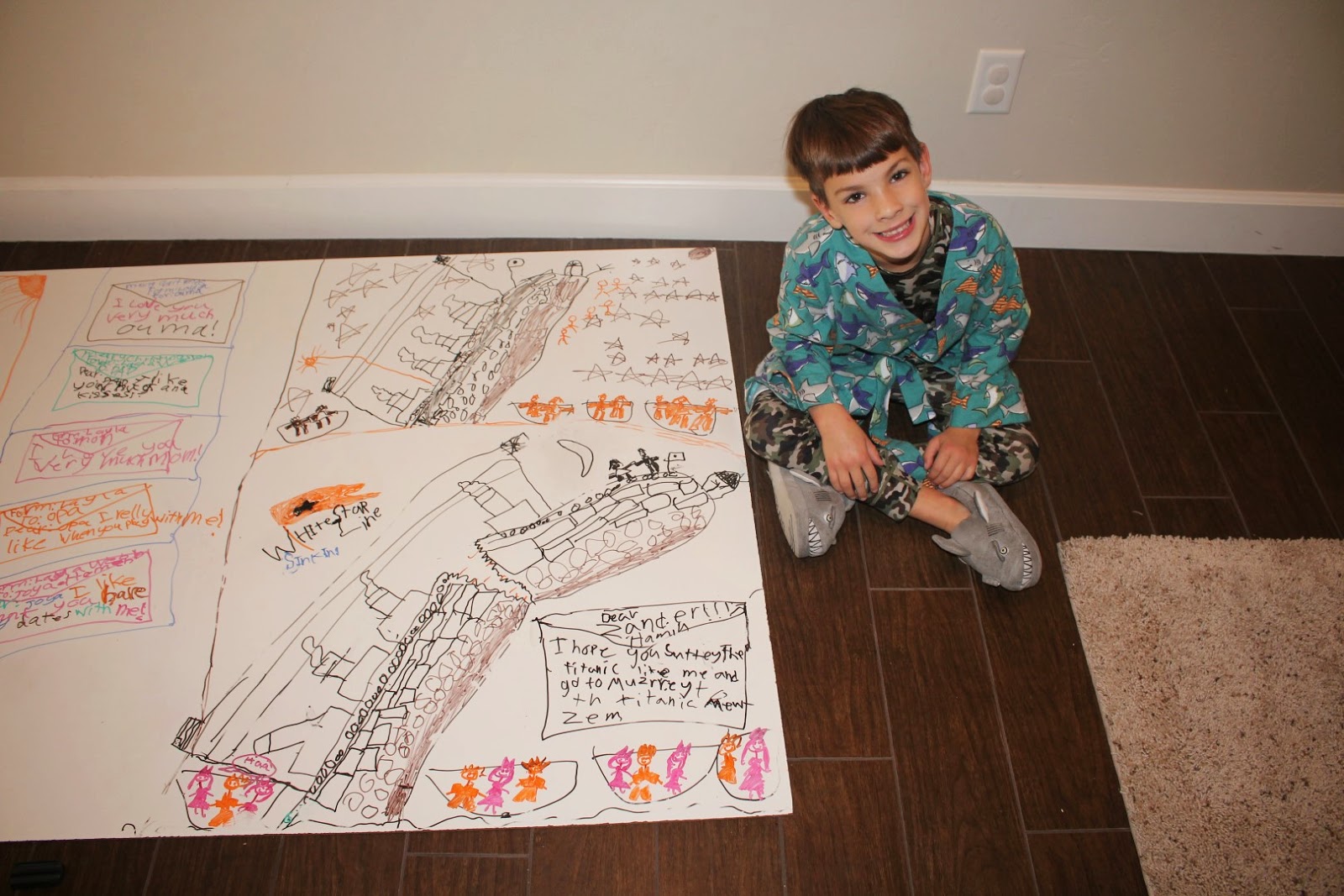 The gift he received is technically not made by Lego, but another knock off building block company called Cobi.   He didn't care one bit. 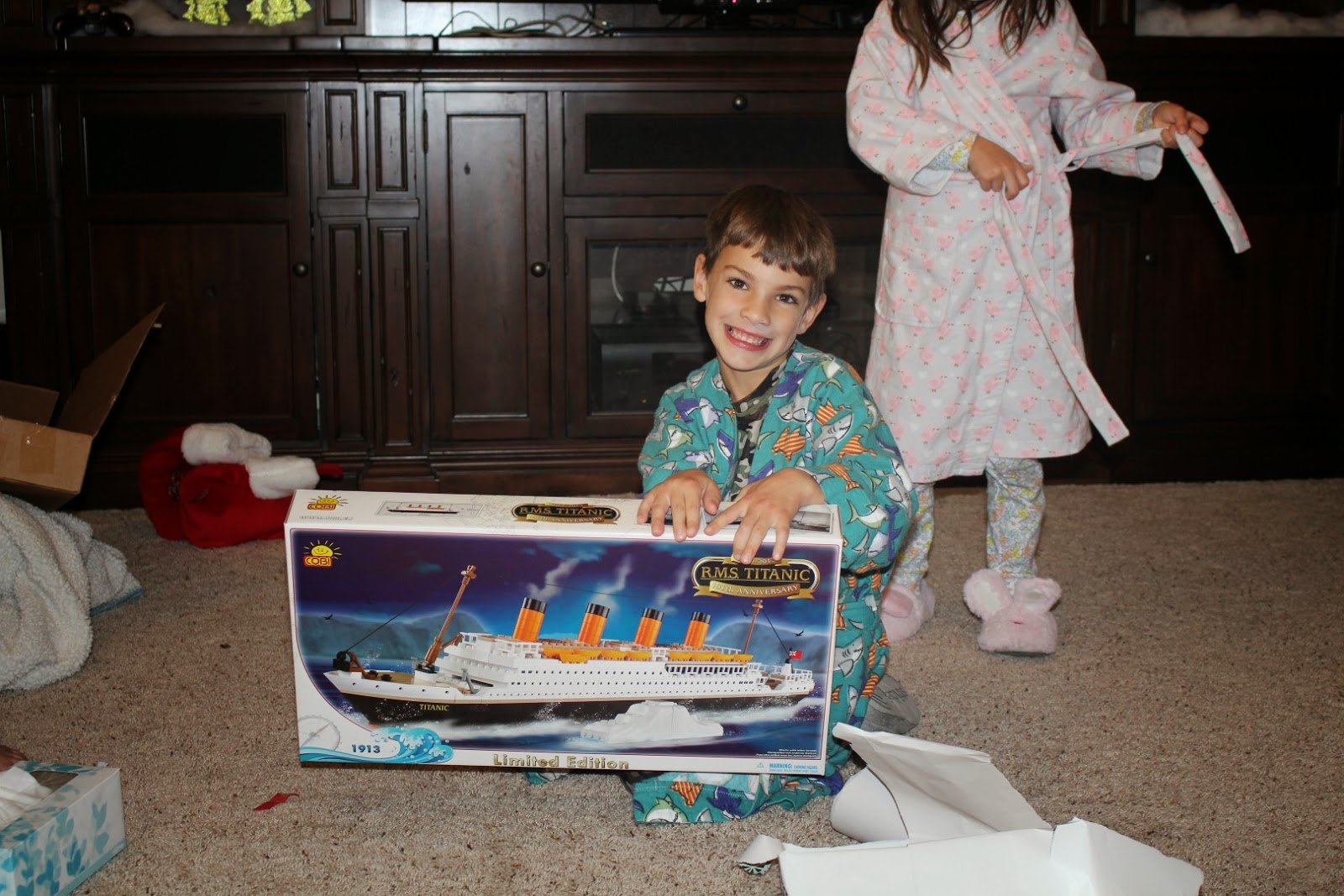 We tore right into it and began building the 500 piece ship. Easton did the building with a little help from the adults to interpret the instructions occasionally. 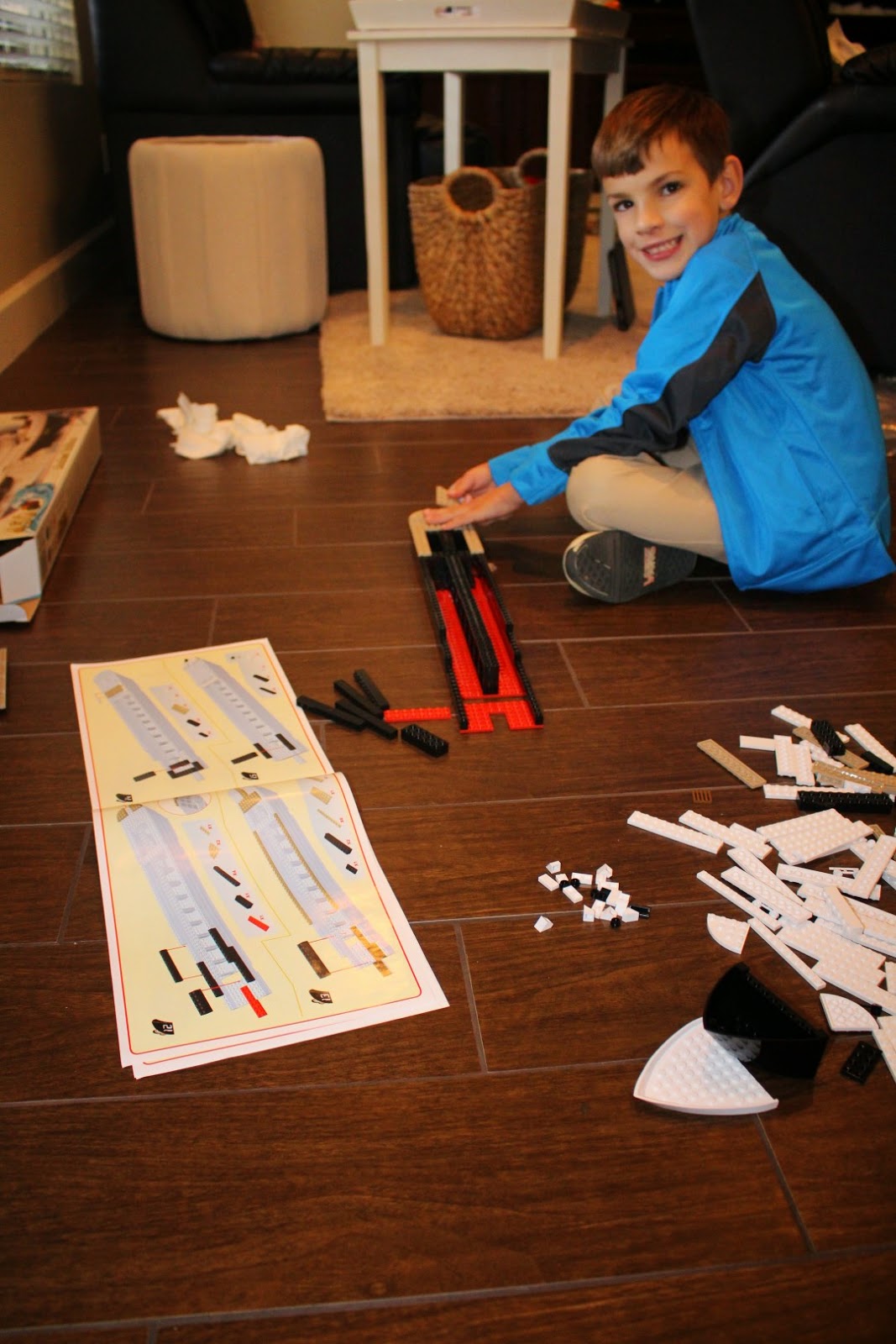 Each layer of the boat included new stories from our hero boy about 1st, 2nd, and 3rd class. 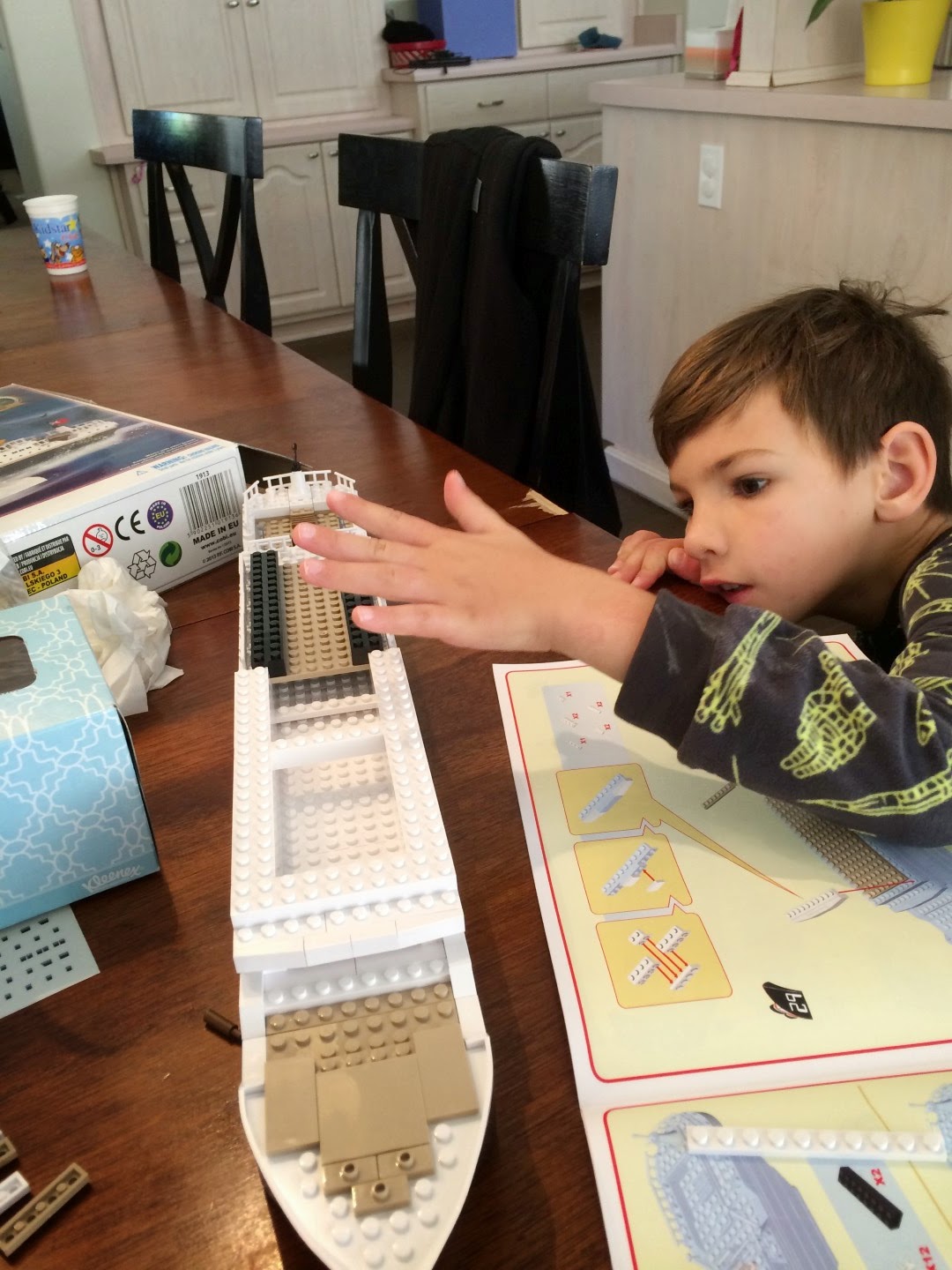 He'd been talking about the smoke stacks for weeks because they look so cool.  When it finally came time to build them he was overwhelmingly proud of his accomplishment. 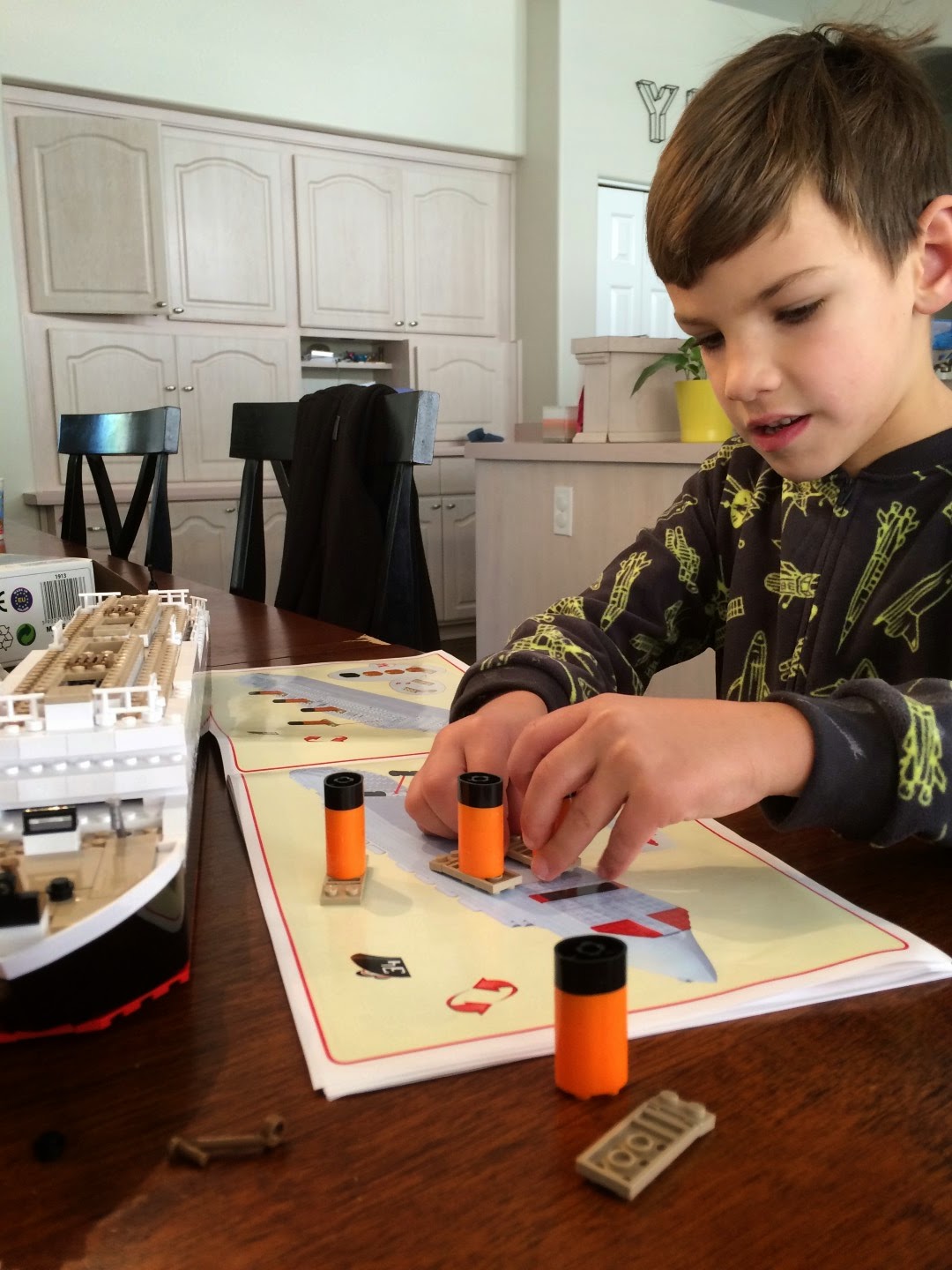 I went in his room a day or two later and found him reenacting the fateful night when the Titanic hit the iceberg.  His most common comment is, "They should have had more life boats, huh Dad..." 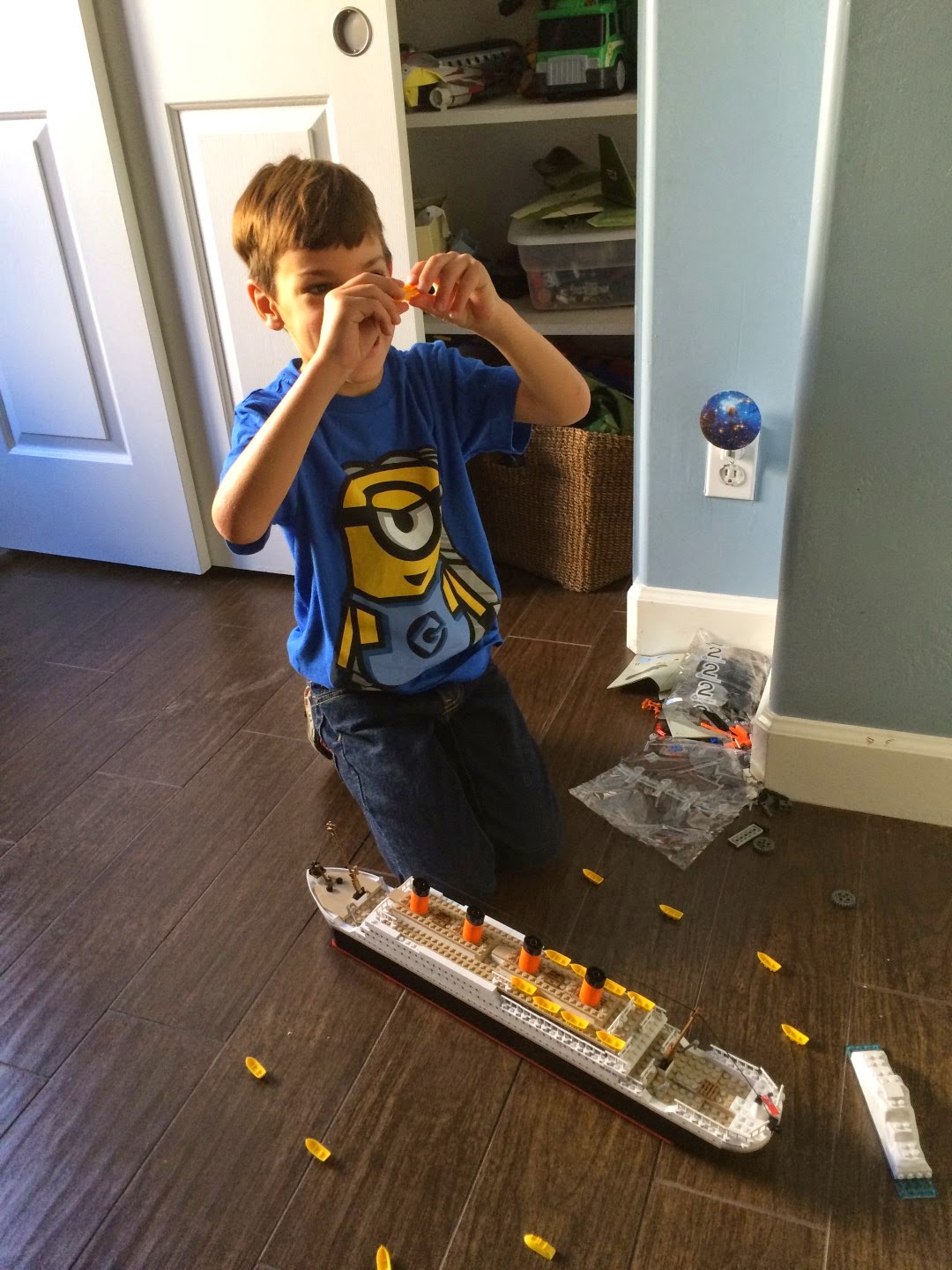 For Christmas morning we were able to Skype with some family members.  We were mildly successful with my sister and her family, but the connection kept cutting for some reason. We also video conferenced Kendra's brother, Casey, and his girlfriend Barbie.  It wasn't as good as being with all of our family, but it was as good as we could get! 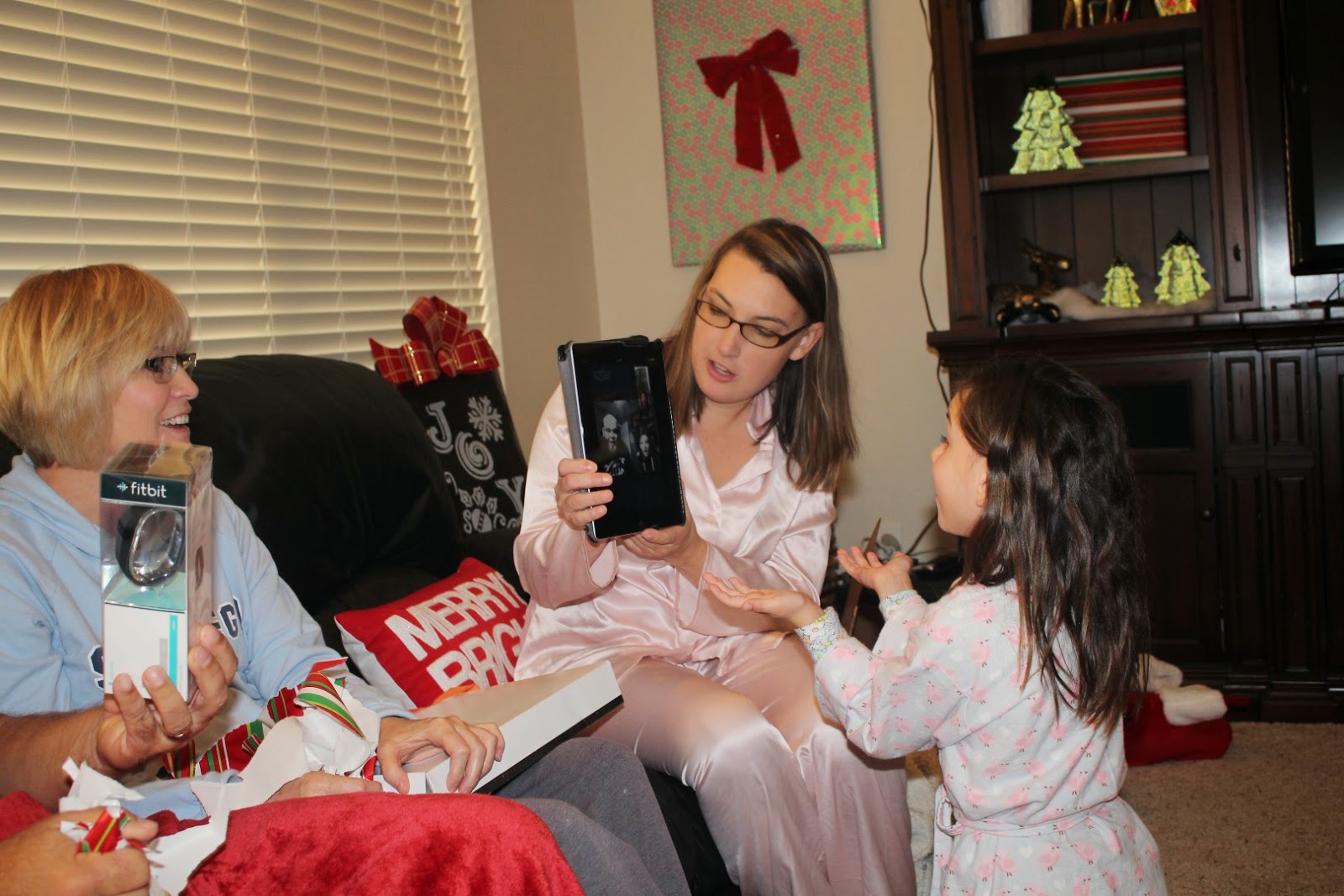 One of the best gifts we received was having Ouma and Oupa with us for 10 days.  The time always goes by too fast and my begging never changes their minds when I ask them to stay longer. 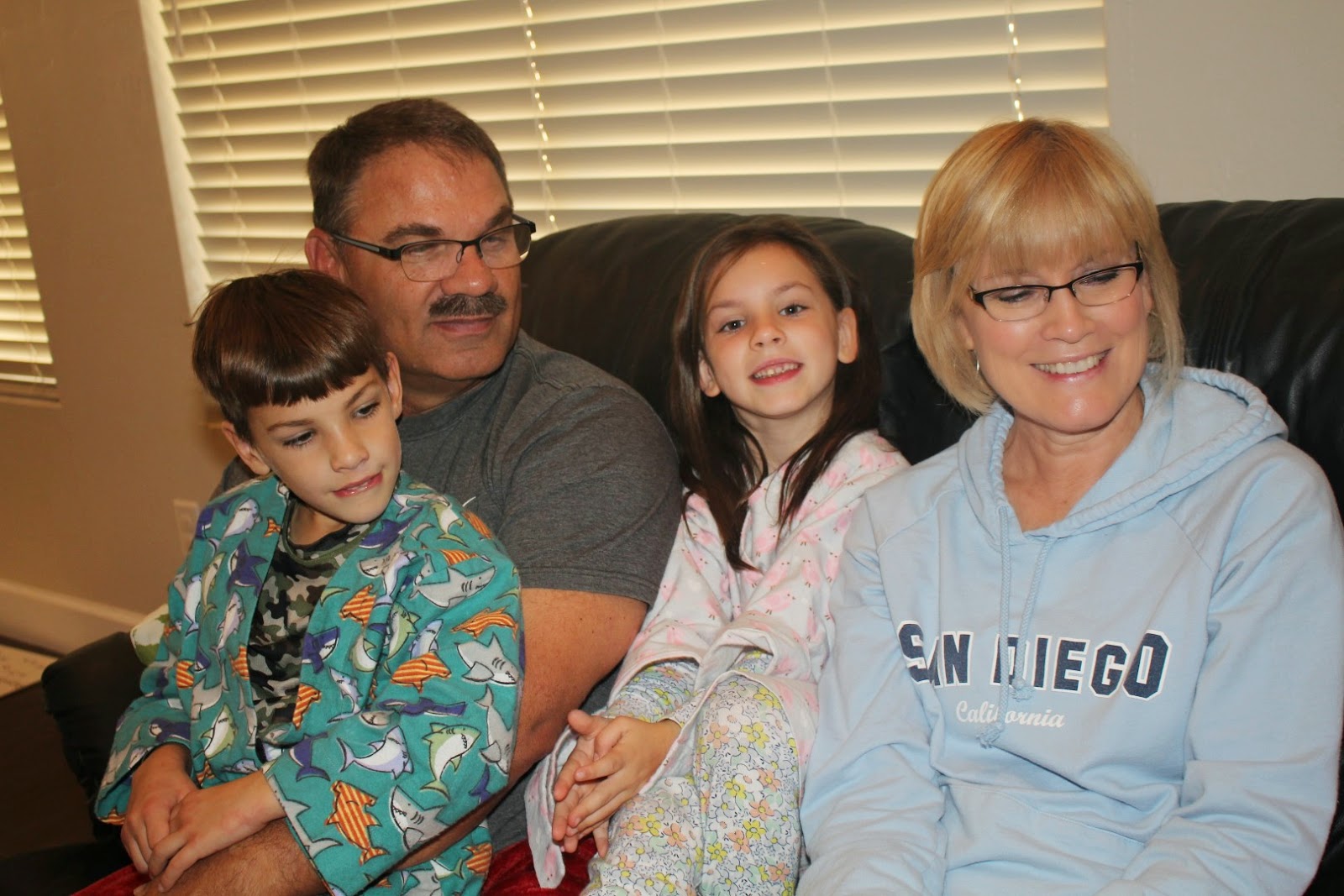 GG sent gifts with Ouma and Oupa.  Layla went into a high pitched squeal when she saw her gift of ice skate protectors.   Easton has never met a Lego box he disliked so these two were all smiles at the end of the big day. 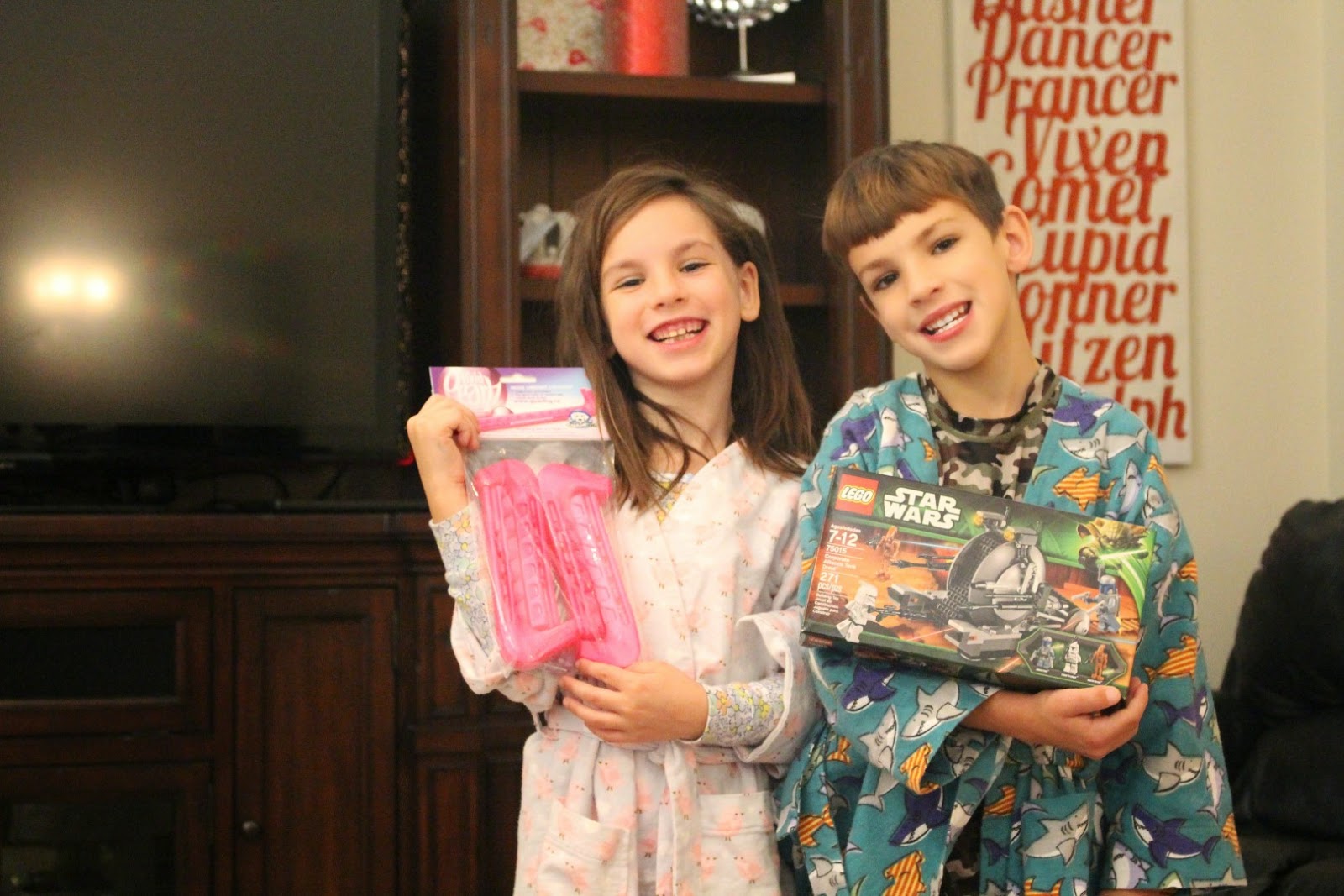 The other family we spent a lot of time with was Logan and Bree.  They came over several times in the past few days to get as much time with mom and dad and the 4 Webbs as possible.  Bree is such a good Auntie that she played Dance games on the XBox with Layla.  I think Layla showed her a few new moves... 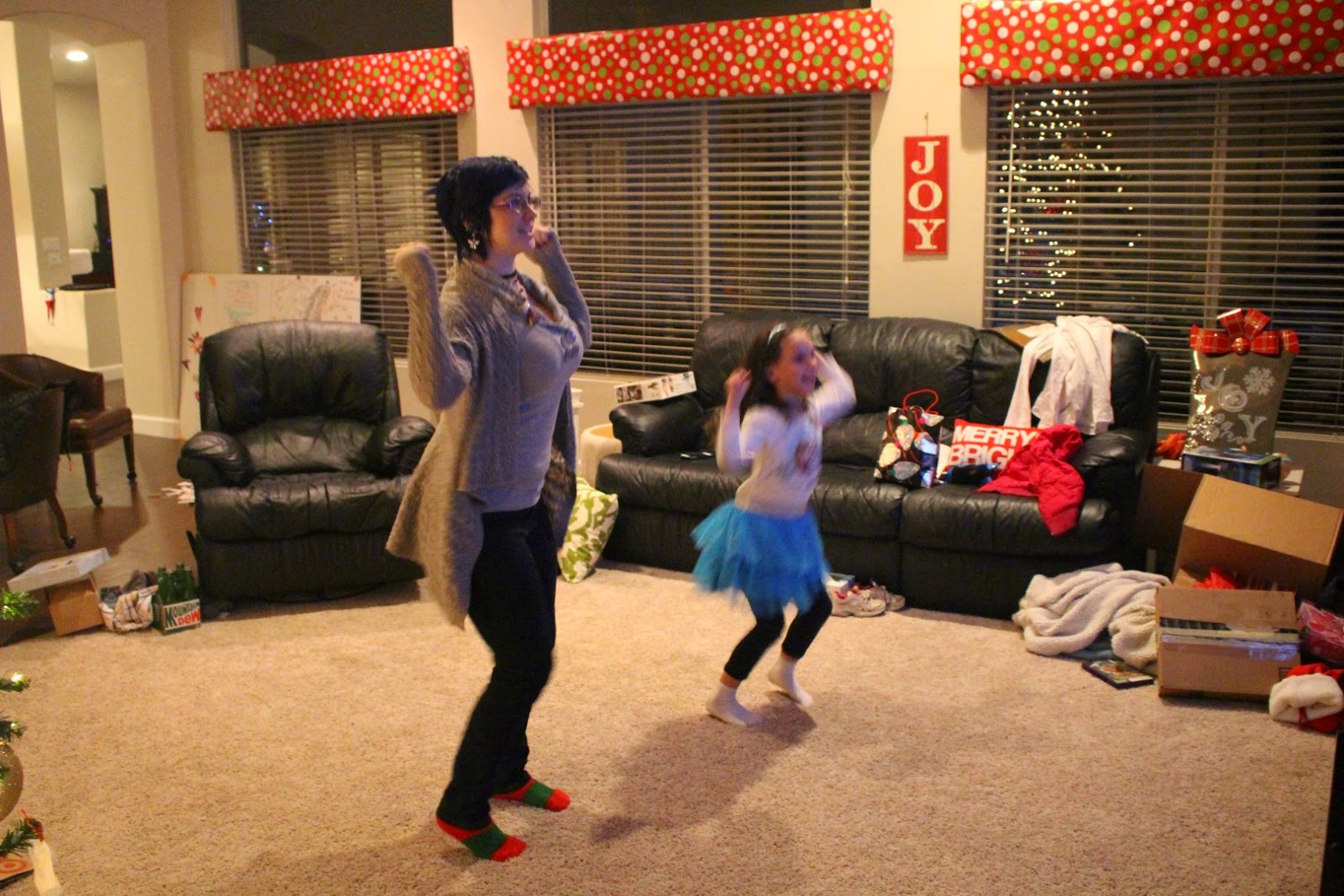 One of my favorite pictures from the Christmas season is this gem of Layla and I.  These moments of her sitting on my knee are dwindling with each passing day.  I still happily carry her to bed each night, give her piggy back rides to the mailbox, and lay next to her each night in bed to sing our duets. 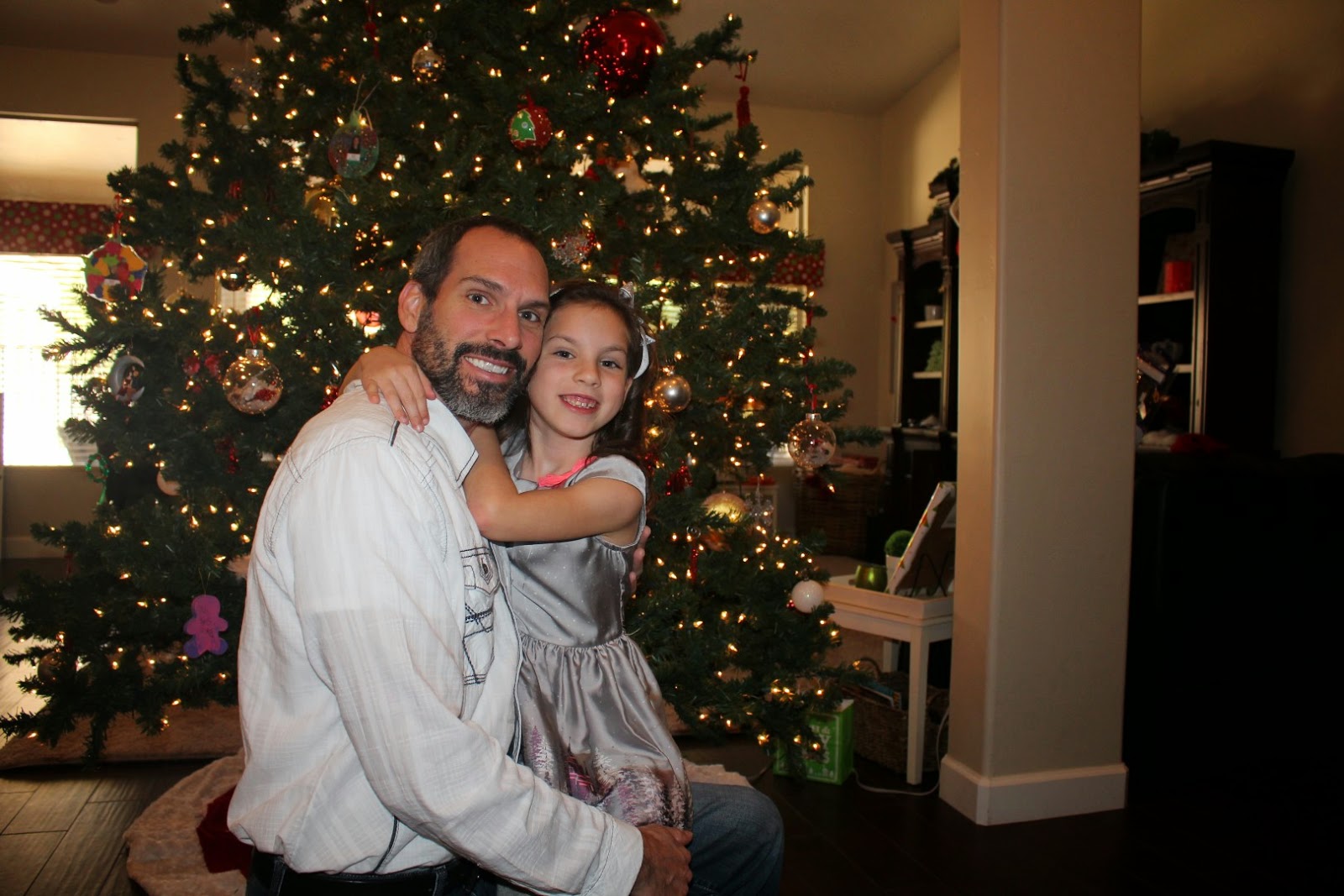 Kendra did some kitchen teaching these past two weeks.  It's time for the twins to start cooking!  I know kids their age 50 years ago who were out milking cows and cooking chickens.  We'll settle for them being able to pour their own cereal bowls in the mornings. 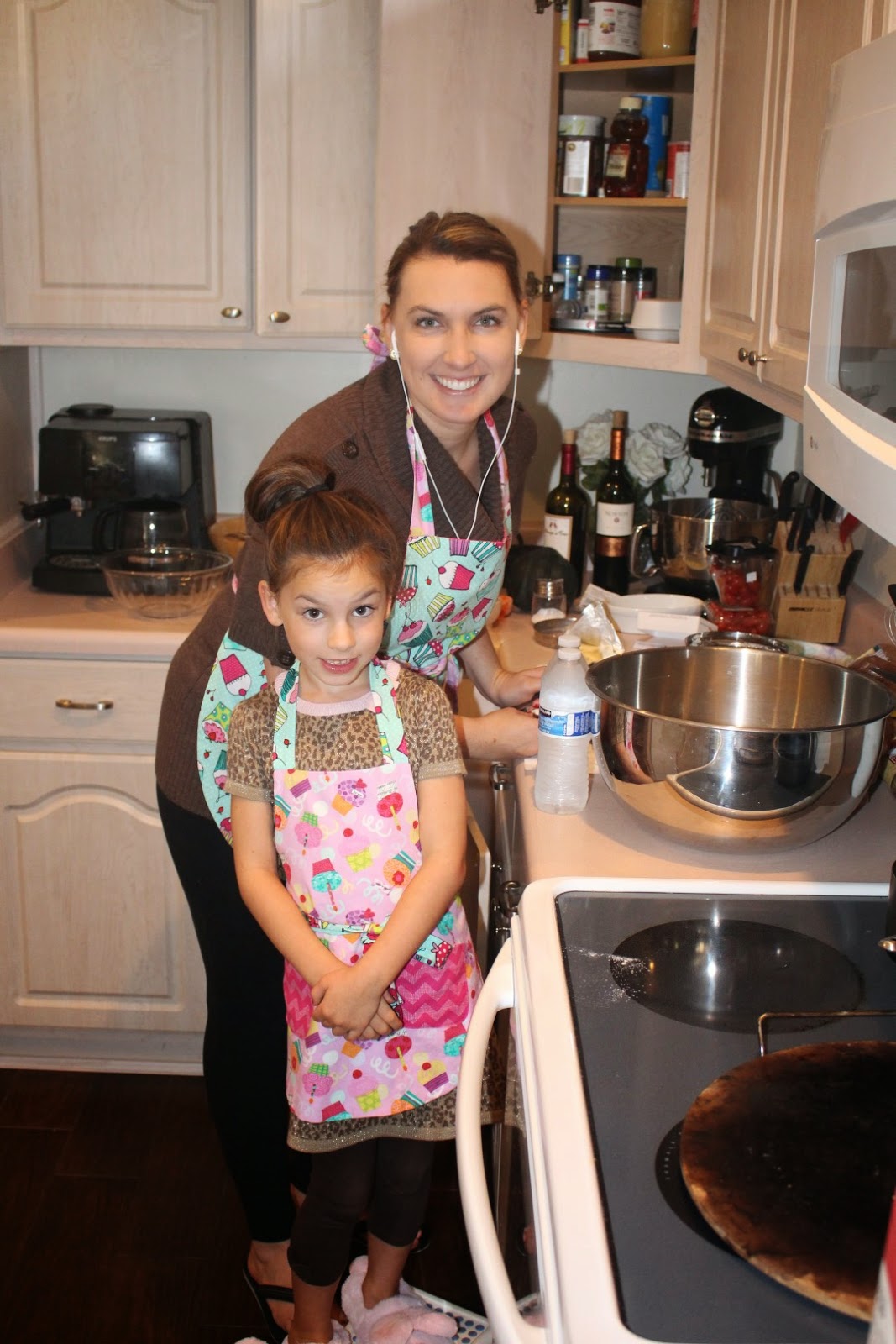 I didn't get many pictures of the decorations inside the house, but here's one of the great room all decked out.  Kendra did a super job of decorating cheaply.  For example, she wrapped the window coverings and pictures on the wall in wrapping paper to look like presents. 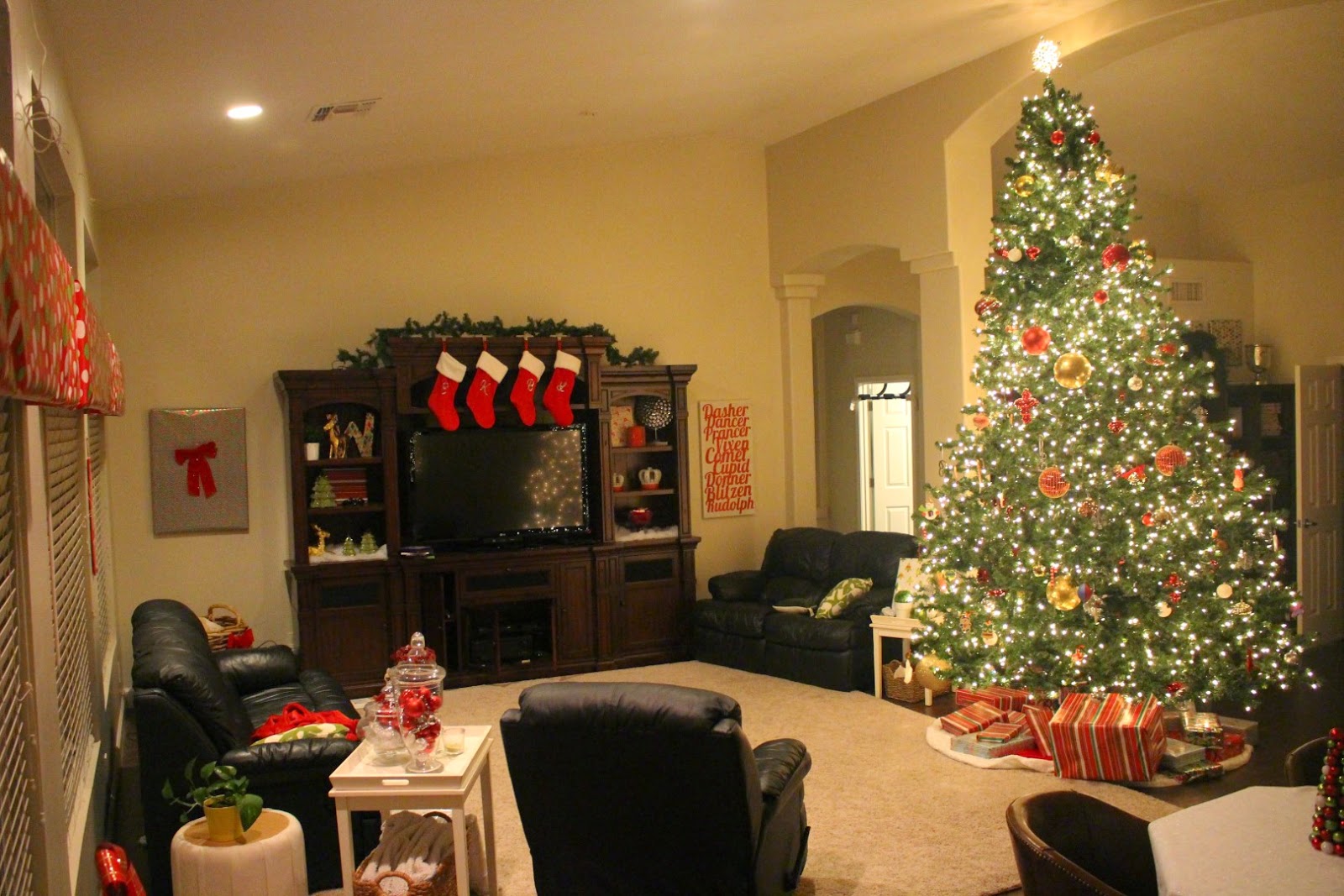 One of the parties included a house full of friends.  Many of us went for a walk through the neighborhood to the guys house who really knows how to go all out.  The girls took a picture on the sleigh next to the oversized gingerbread people. 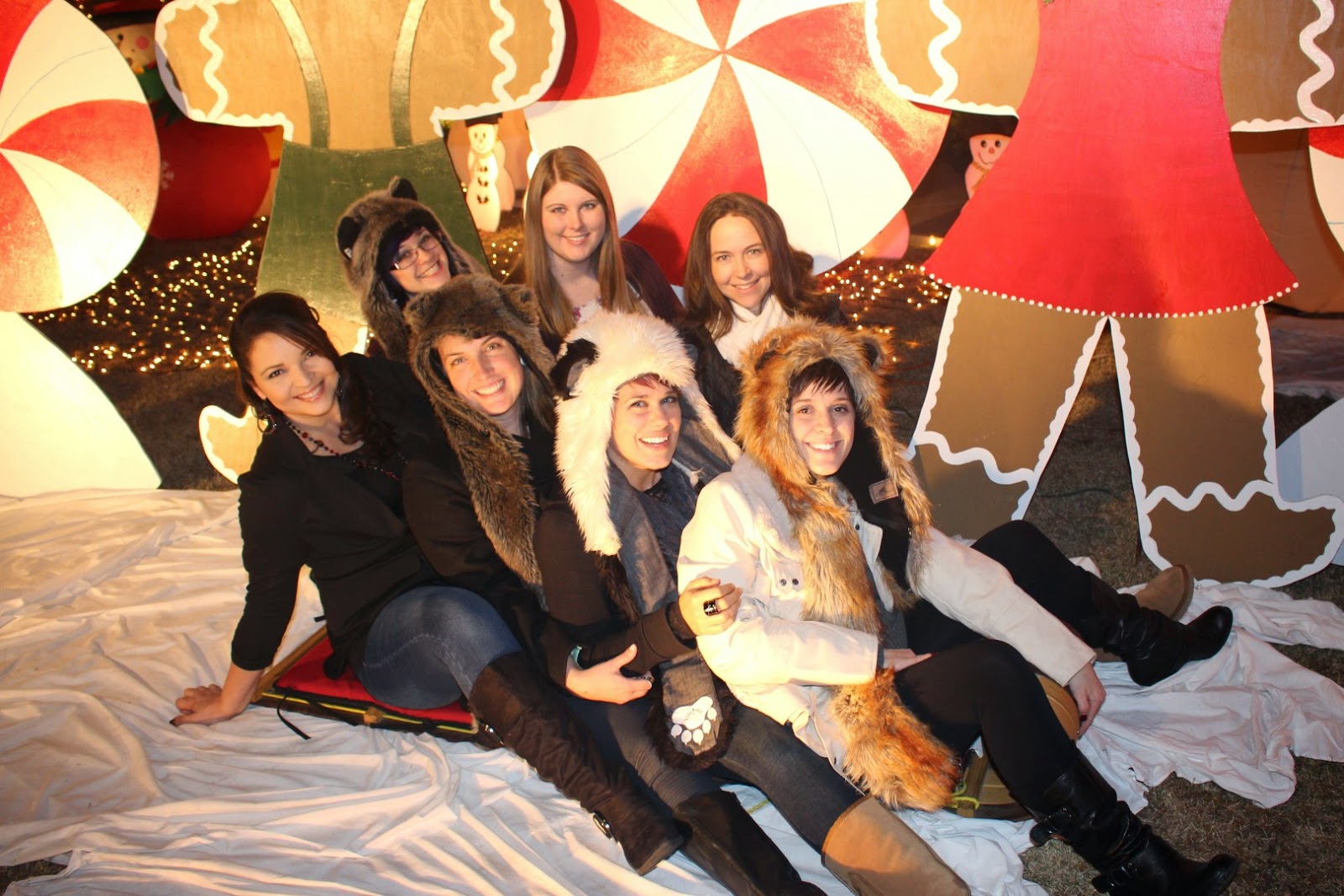 Us guys were just goofy as we jumped in front of the background of lights.  Turned out to be a fun night 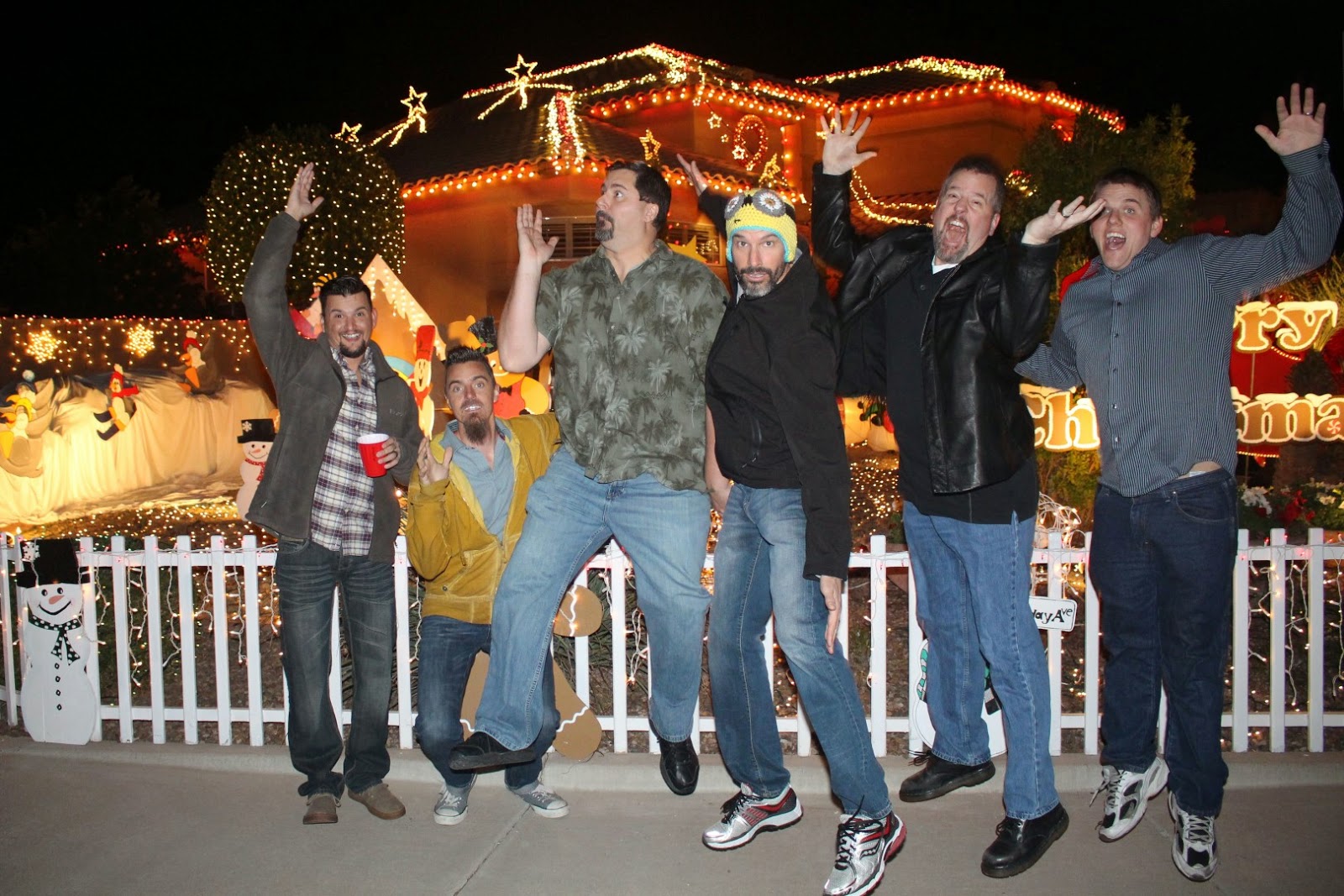 During that same night we had a white elephant gift exchange.  Some of the gifts were outrageous, but mine was just plain funny.  I opened my gift to find a pair of "Farter's Underwear".  It was a gag gift that has a big stop sign on the butt, which supposedly traps the stinky gas.  I played along with the fun by putting them on right then over my jeans. 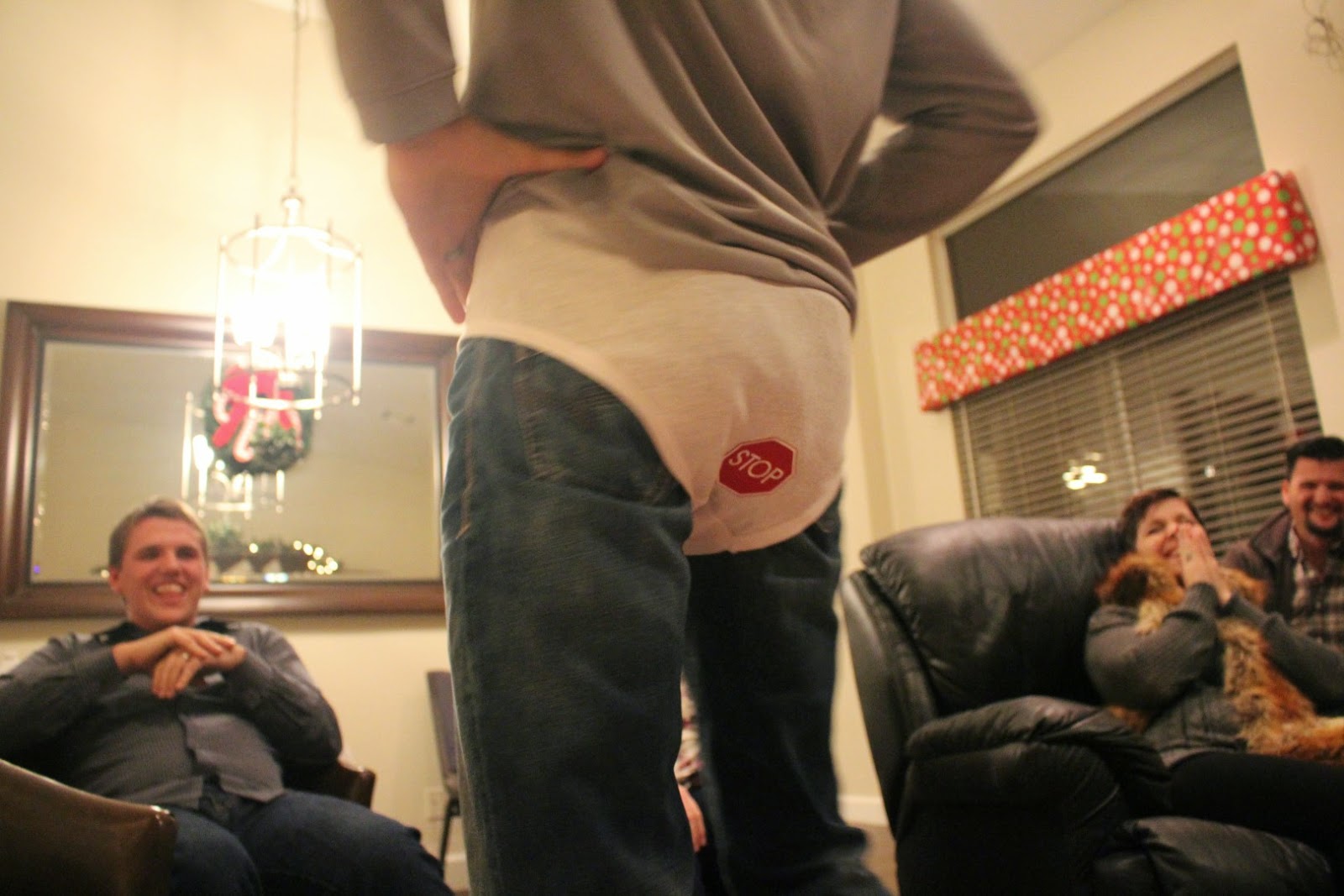 Yeah, that happened.  I've lost a lot in 2014.  Many things I should have let go of many years ago.  For example, I lost the control I gave to other people by considering what others think of me.  It's been a slow process over the past few years, but I reached place where I no longer care what people think.  I am still very considerate and kind and thoughtful, but there isn't an ounce of "what will people think?" left in me. 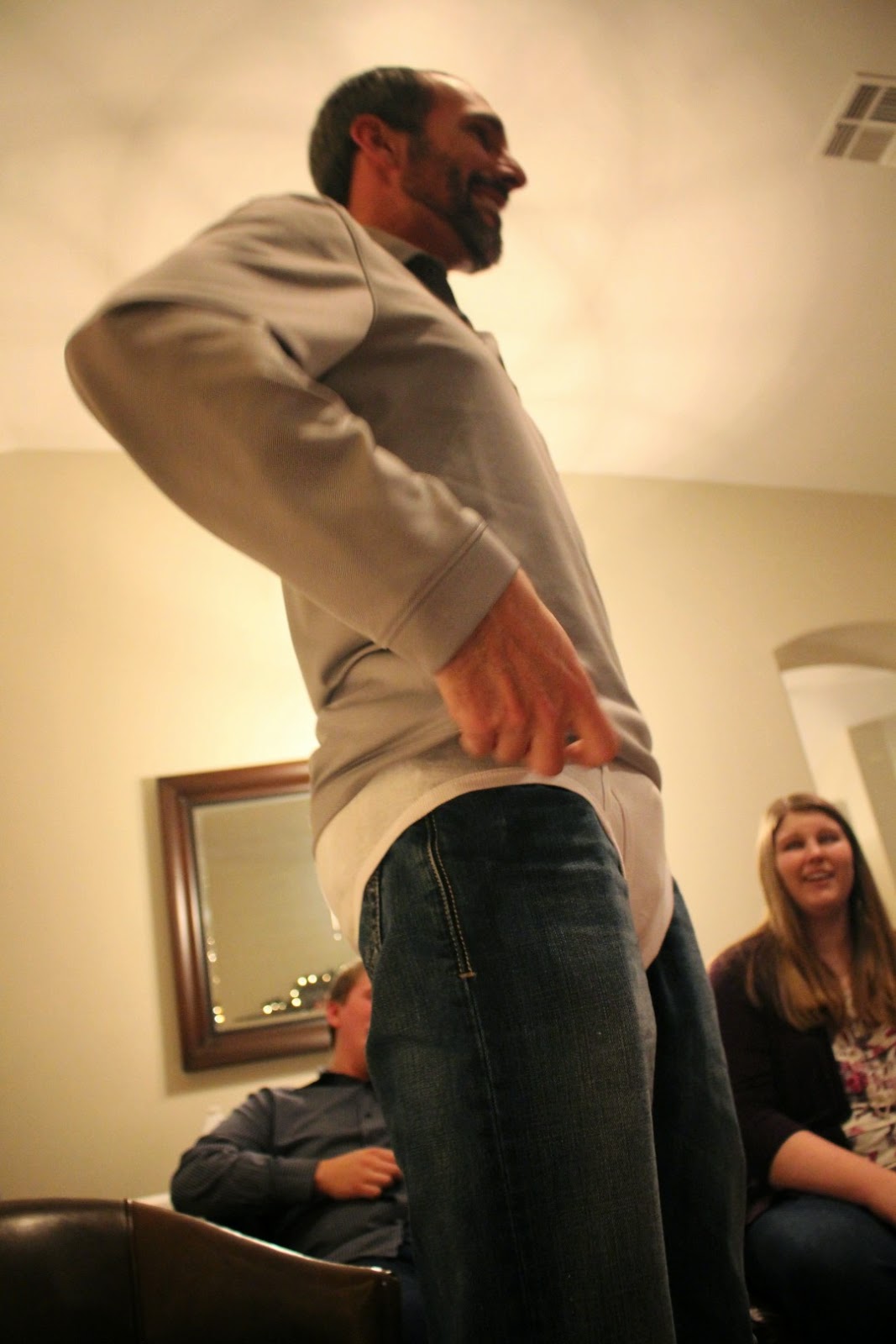 I hear this place of peace is usually discovered by the elderly who lose the filter between their brain and their mouth.  That's not such a great place to be and I'm not that far overboard to be offensive to people.  The way I describe it is by saying, "I'm so free from myself that I'm free from others."  Now that's freedom.

It was great to see the twins ride their bikes and dance in the children's musical at church. Layla did a great job skating! Easton is so smart to figure out how to put together the lego Titanic! I'm glad you had such a special Christmas time. Missed you all so much, though. I trust your New Year will be filled with much joy and memorable experiences as you continue to be a part of the twins growth journey. Love ya gobs, MOM