Wedding at the Webbs

The 4 Webbs hosted our first wedding ceremony and reception.  The past week was consumed with house cleaning, shopping, decorating, creating, and staying out of the way.  But first i get to catch up on the the stories leading up to the big event.

Easton slept in full pajamas since he was a baby, but now he switched to shirtless.  He had a sleep over at one of the two households we trust.  His friend doesn't sleep with a shirt, or so Easton says.  Ever since then Easton doesn't sleep in a shirt either.  Peer pressure is way too effective on him.  On the positive side he is very observant and nothing gets by him if he is interested.  Notice the clean room?  Every night...  Atta boy. one of the few disappointments of the past few weeks is that I didn't get any pictures of Ouma with the twins.  Just having her in our house is the greatest blessing, but I wish I would have captured more of the many fun moments with her here.  Kendra and Bree went shopping with her and found the costume aisle. Kendra's owl mask is a hoot!  Bree's love of cats is obvious.  Not sure why Ouma has no mask? 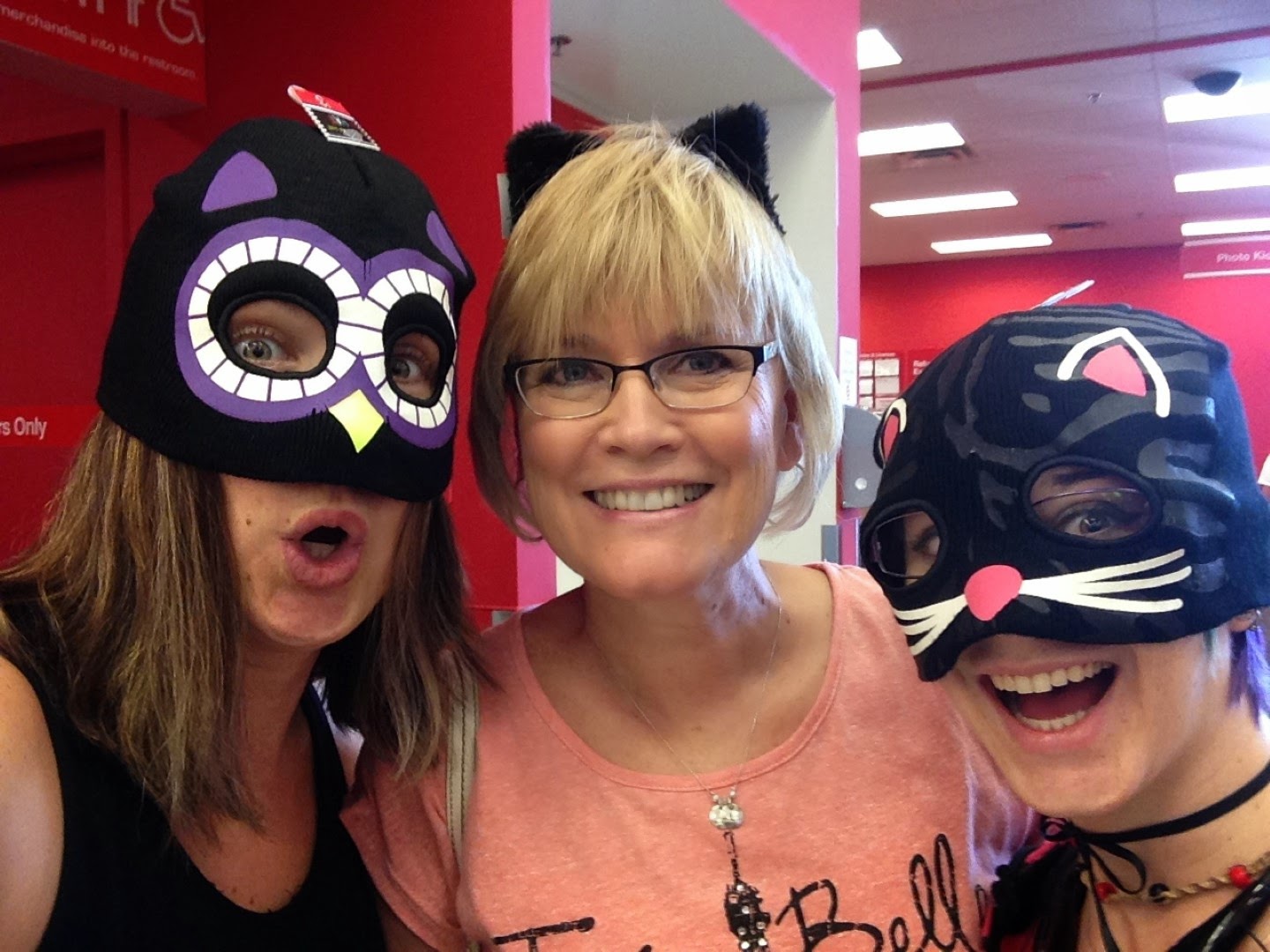 I wonder where Easton gets his interest in owls? Notice the owl shirt... 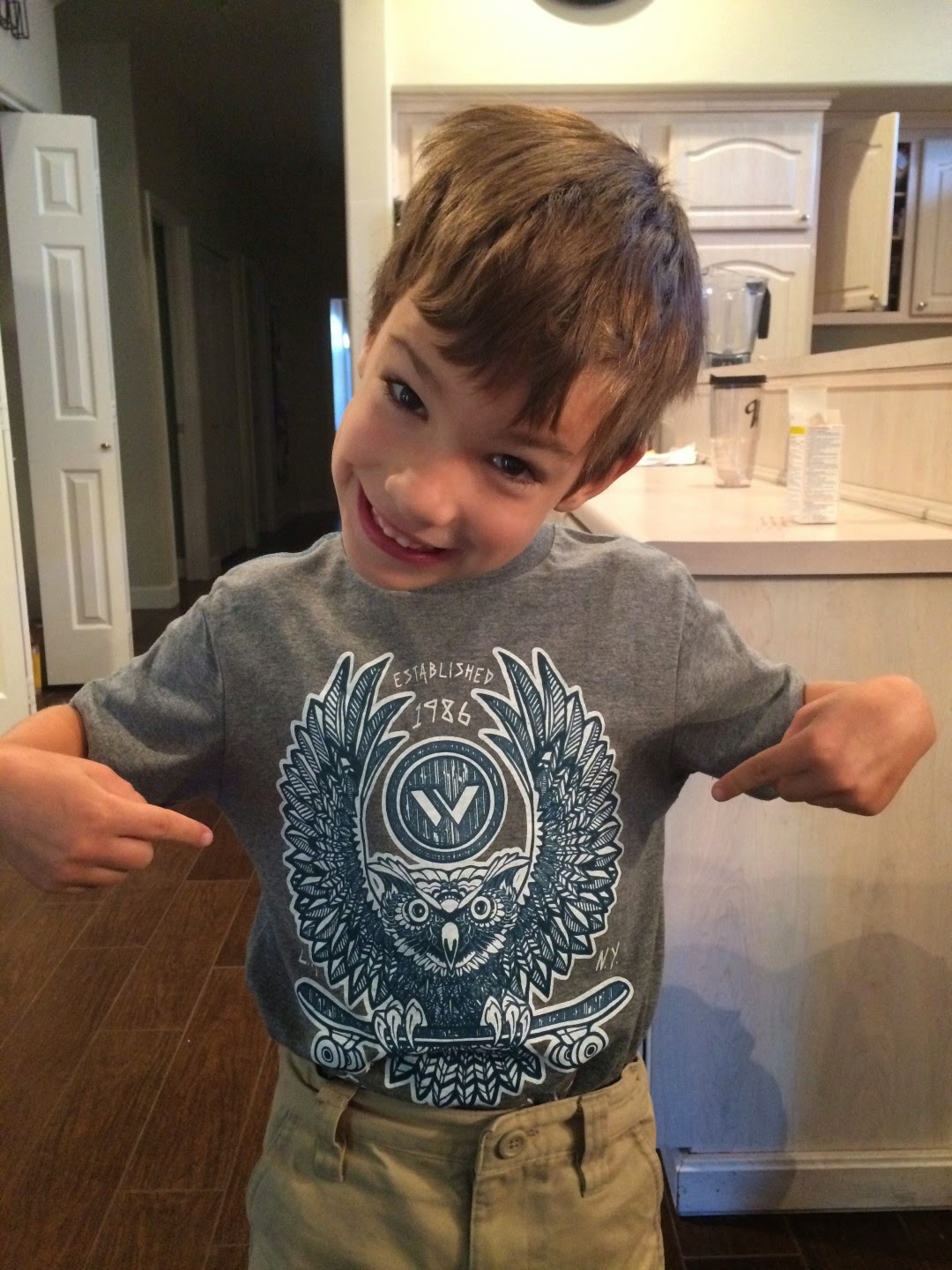 He proudly wore the owl shirt for his "no uniform" school day on Friday.  Layla was sick for the last week.  There were 5 of her classmates out sick on one the days.  She caught whatever it was and had the normal fever and slight cough.  Some parents described their child's symptoms of diarrhea and projectile vomiting.  Made me grateful for Layla's only symptoms of an elevated temperature.

I picked them up from school on Friday and went by Jamba Juice for a healthy snack and immunity boost.  We were laughing about the noise the straw makes against the lid.  I didn't realize how loud we were until i looked around and noticed the entire store including workers were watching us. I would be concerned if people were annoyed or offended, but everybody was smiling and some laughing with us.  or at us.  either way, we brought some sunshine into the store. 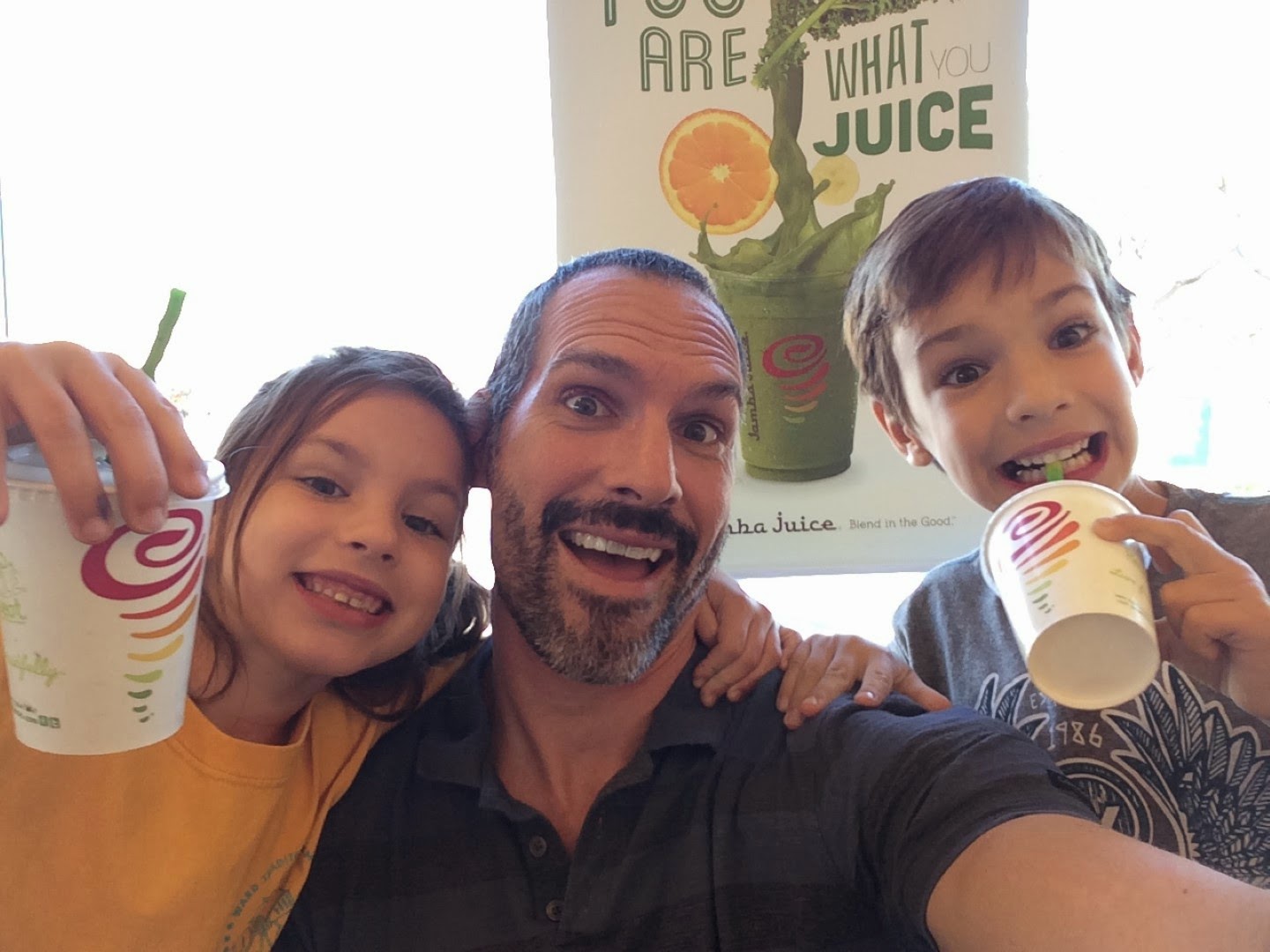 The wedding hosted in our back yard was for a young couple in our church.  Kendra and I watched them grow up over the past 5 years.  They spend time at our house hanging out.  Once they decided to get married they asked to have the ceremony and reception in our greenbelt.  We gladly agreed and it was our pleasure to bless them with a venue and all the help we provided.

One of the other requests the couple had was for Easton and Layla to be one of the two flower girls and the ring bearer.  or as Easton kept calling it, the "bear ringer".  I still laugh about that... Layla is pretending to throw flower pedals out on the pathway.  Both of them were good listeners and well behaved. 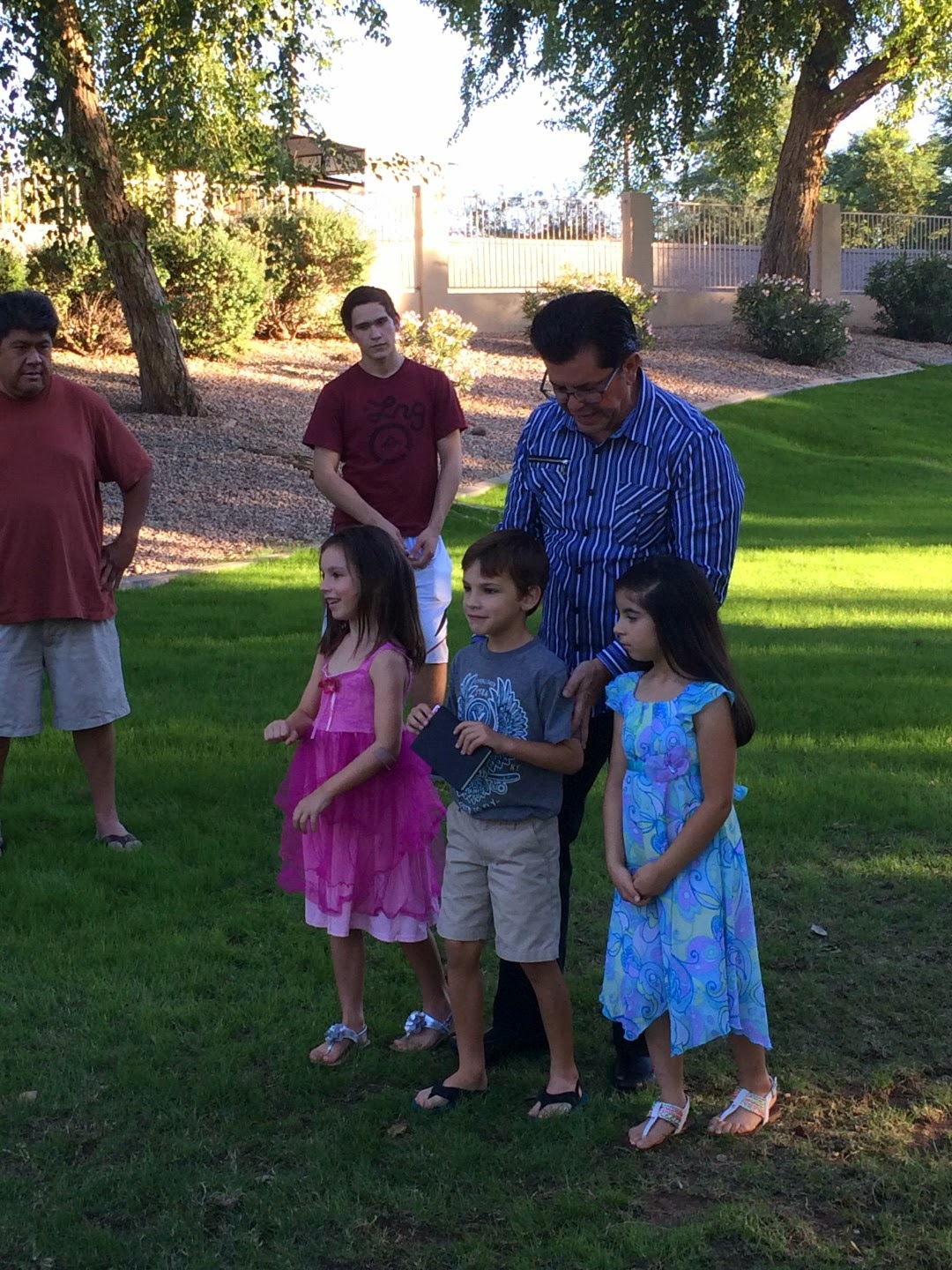 As the ceremony rehearsal ended Easton and Layla and Kayla walked back down the aisle together.  I proudly watched Easton show his skills as a gentleman! 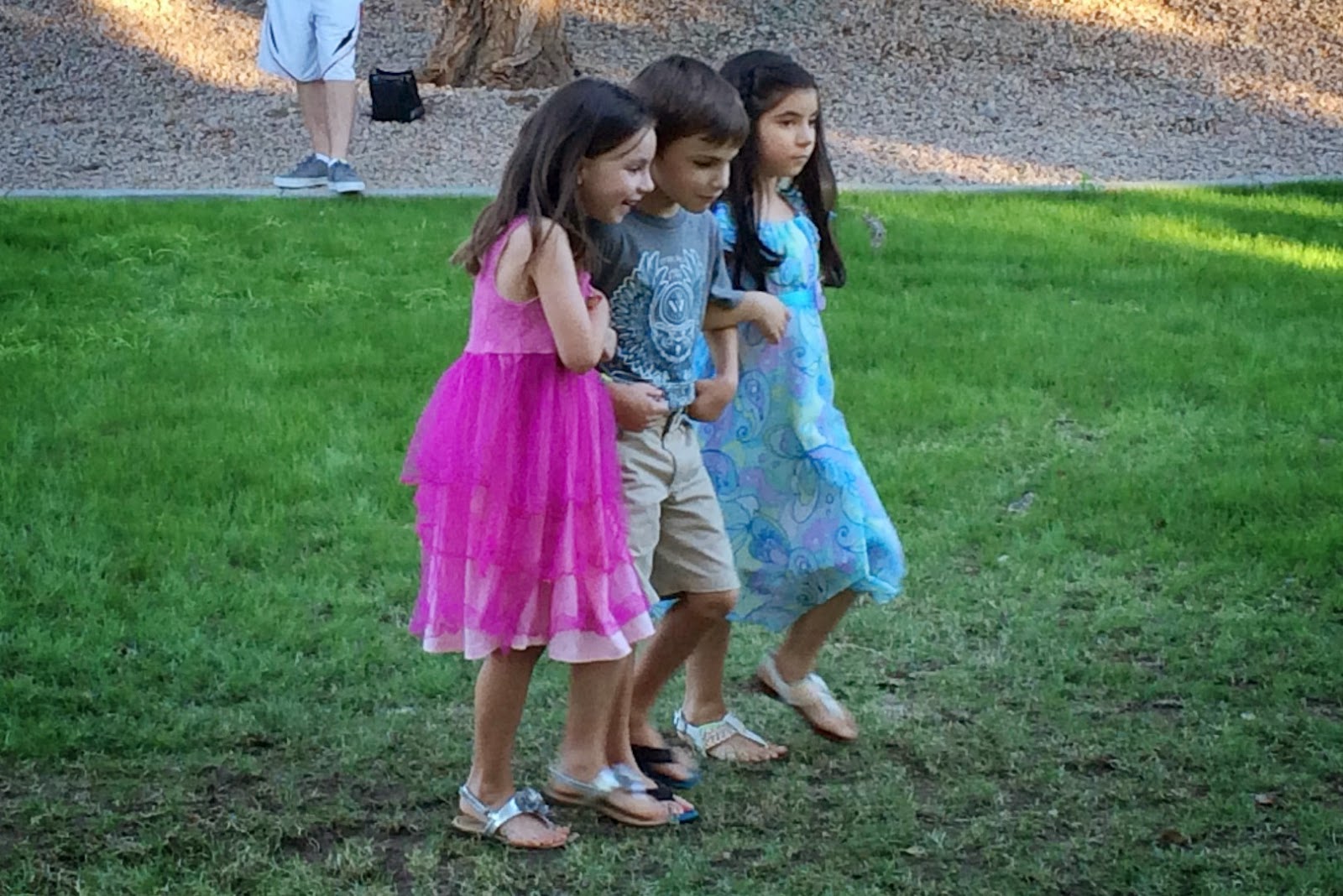 The next day was wedding day.  My job was to prepare the back yard and stay out of everyone's way.  The side-job was to keep the three kids out of way too.  I took them out for lunch and shopping for Easton's shoes.  This is what happens when a boy gets stuck in the jewelry section with two girls.  He said, "Is this like uncle Casey?" because Casey had his nose pierced some time ago and Easton remembered. 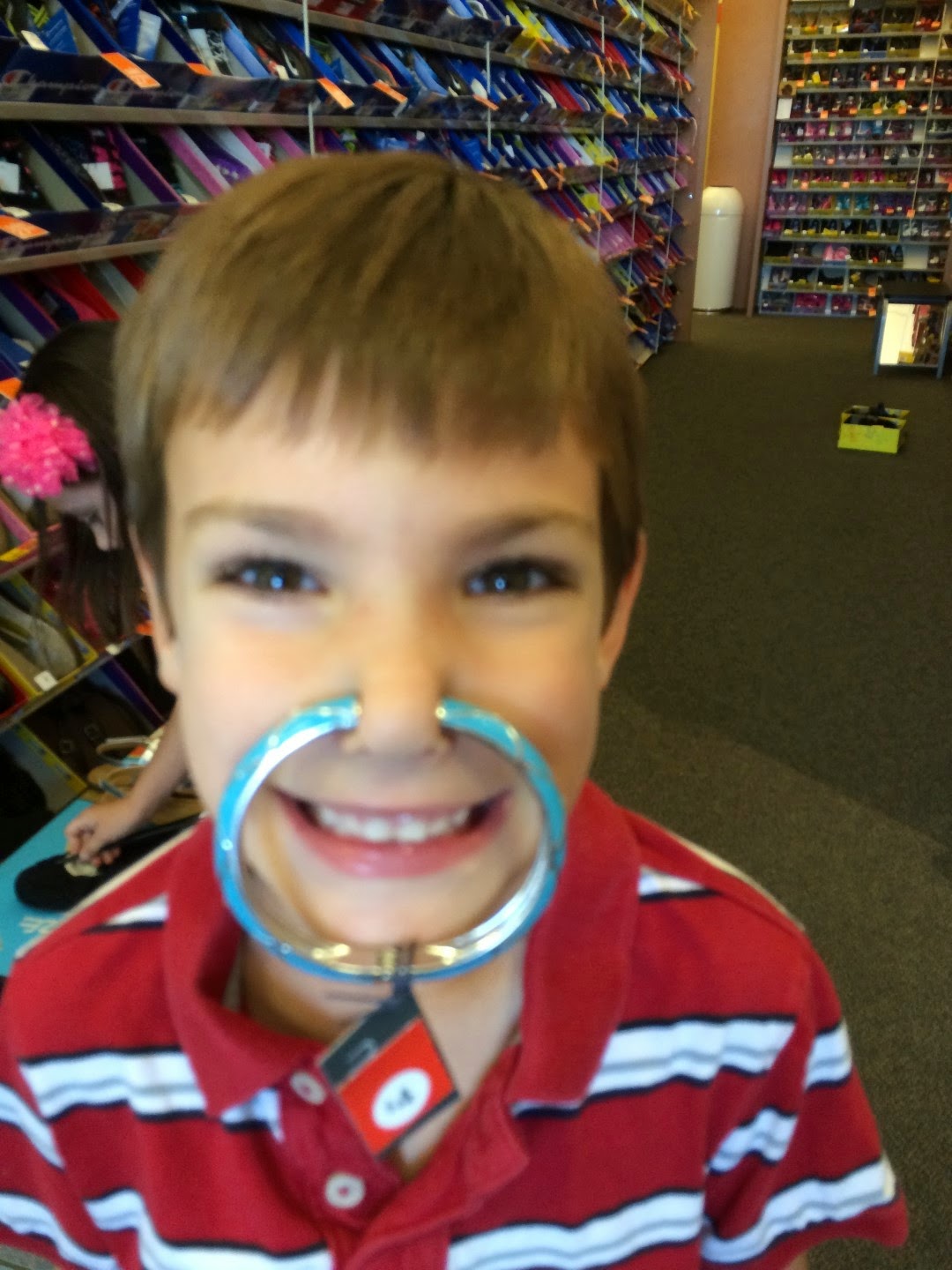 Lunch was at a mexican restaurant.  What kid doesn't like chips and beans?  These three sure do. 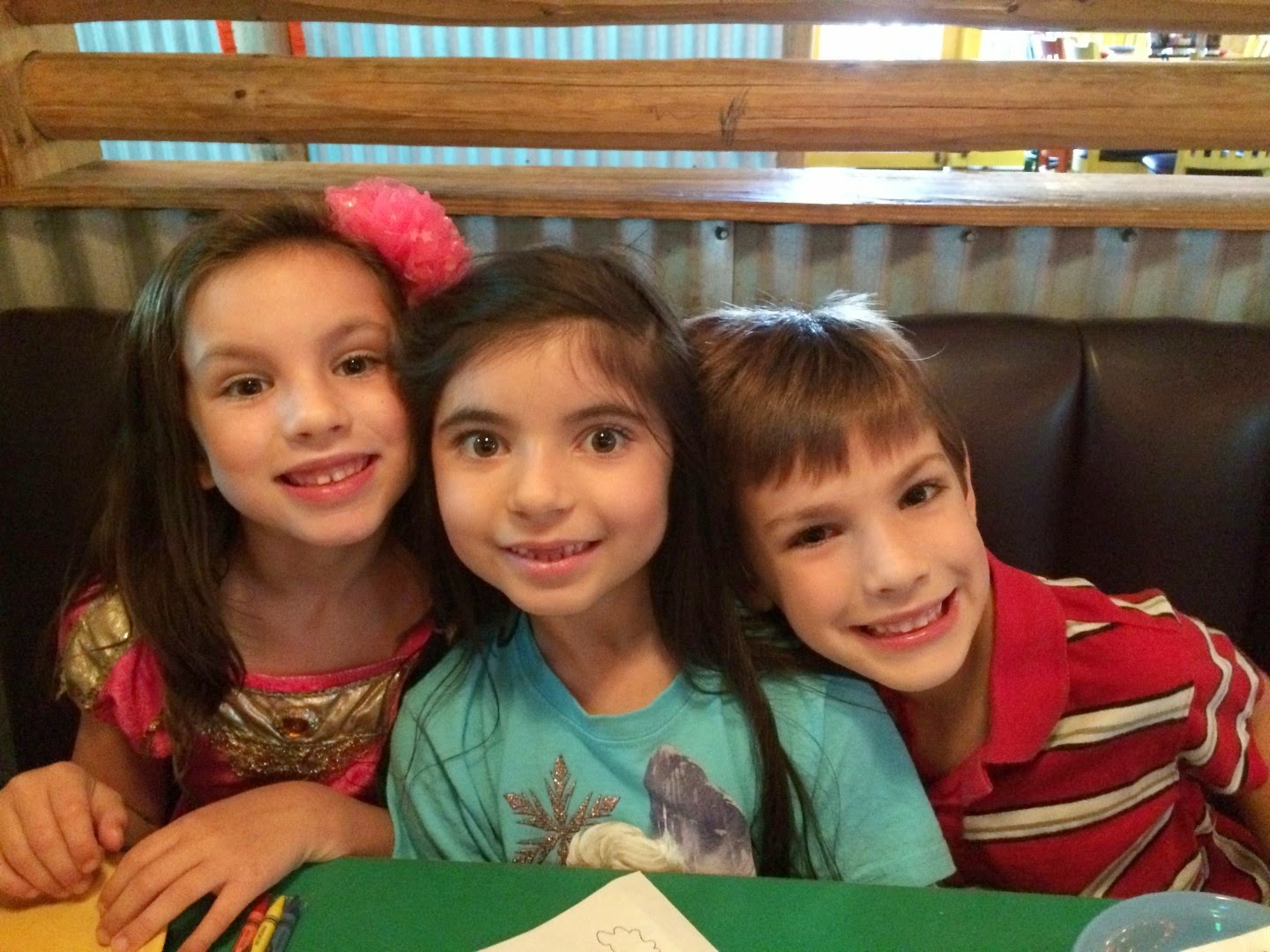 While waiting for our meal we walked around the water features outside.  This night when I tucked Easton into bed he said, "Kayla was really into me today."  Oh my...  it's too early for him to start noticing that. 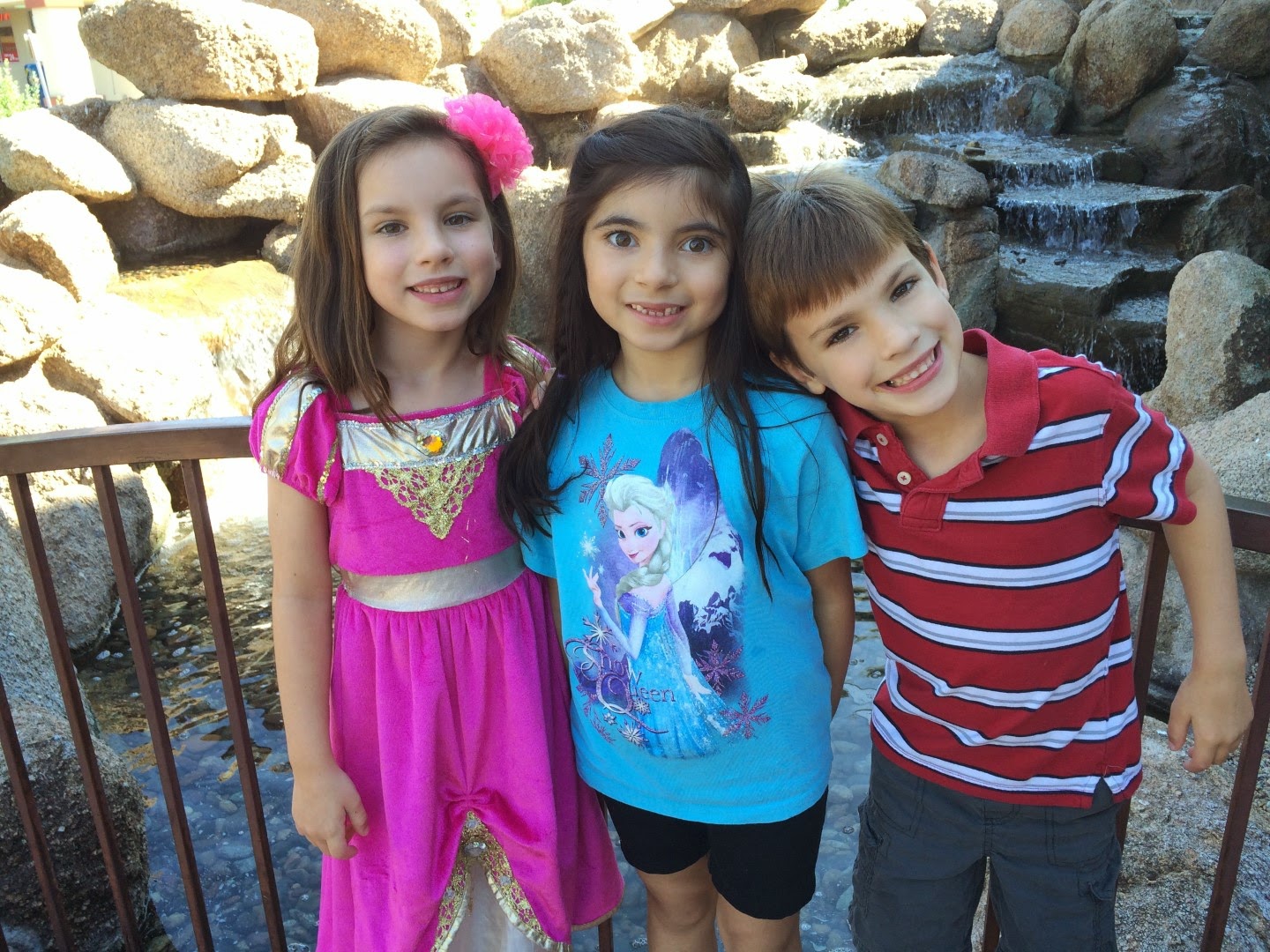 Layla fought against every desire to touch the water.  I told them they could look but not touch.  the little sprinkles from the waterfall got her feet slightly wet.  I love to see the enjoyment a child gets from the little things like water drops on toes. 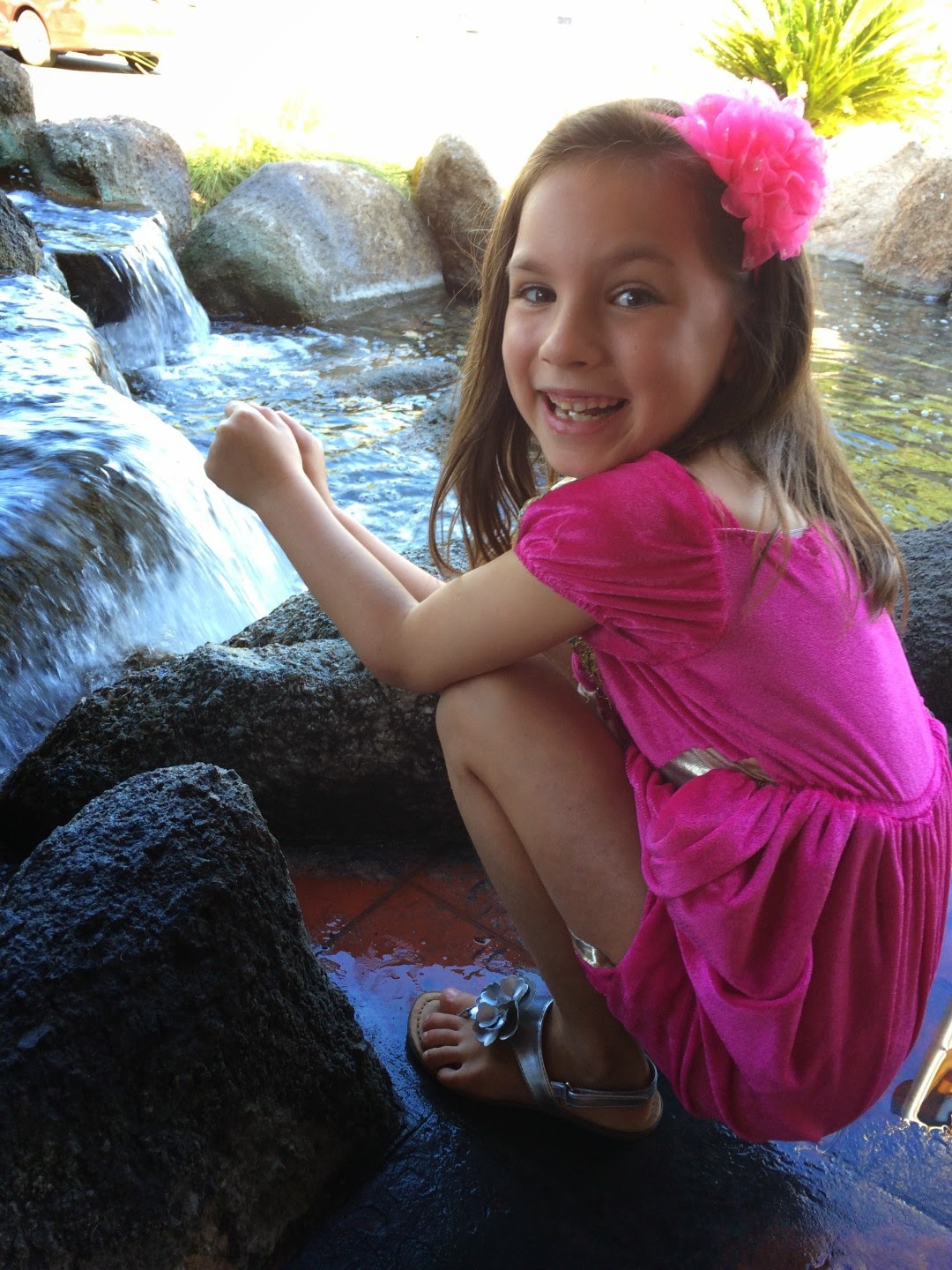 She was eager to pose when I asked to get a picture of her with the waterfall as the background.  Yes, i still let Layla wear princess dresses out in public.  There are lots of aspects of parenting with an expiration date.  I have no idea when her desire for this will expire.  Until then, princess it is! 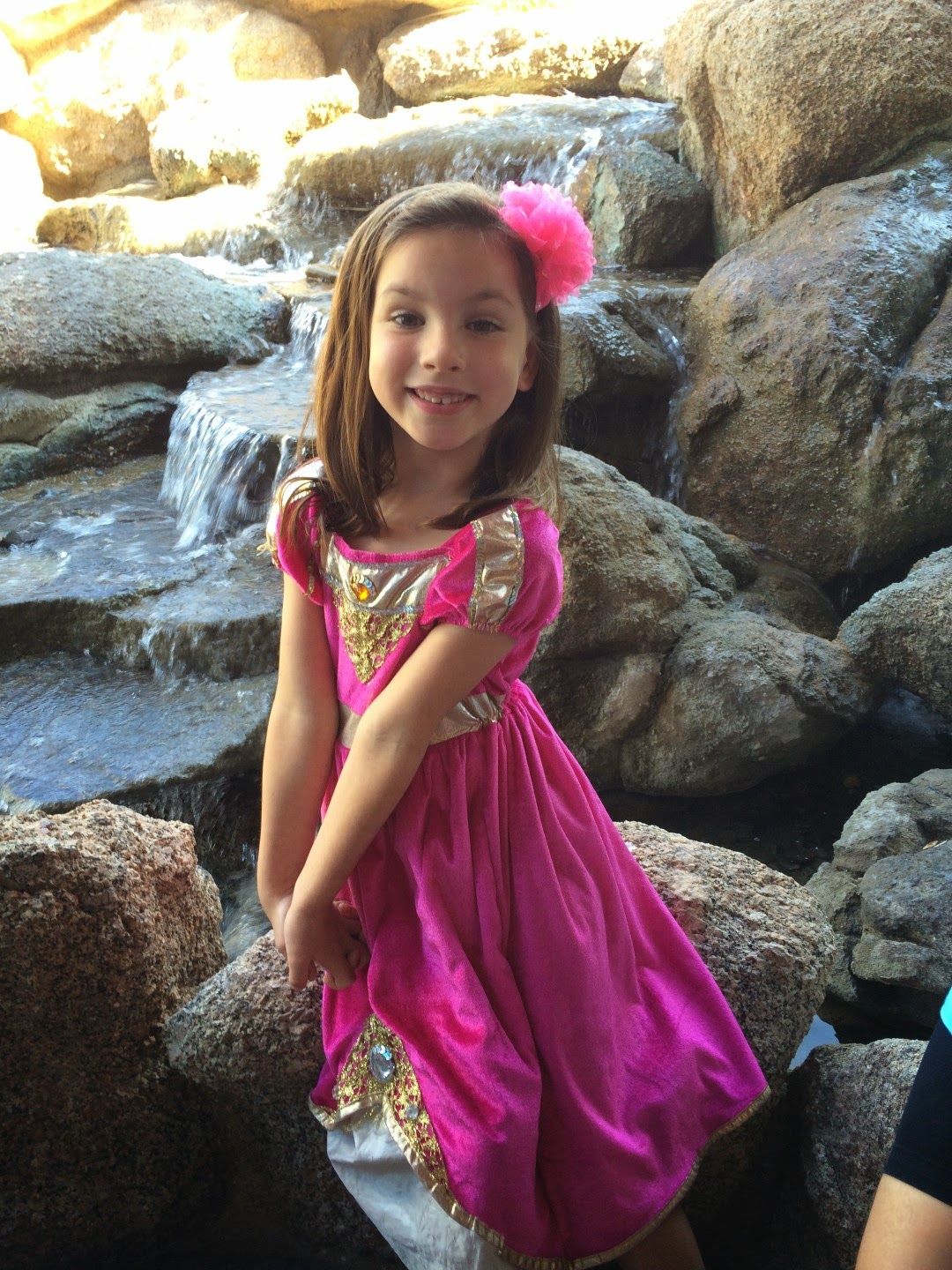 Easton wanted me to be in the picture with him.  He was most interested to know what causes the foam to form in the water and why water makes sound when it flows over the falls.  That's my inquisitive boy! 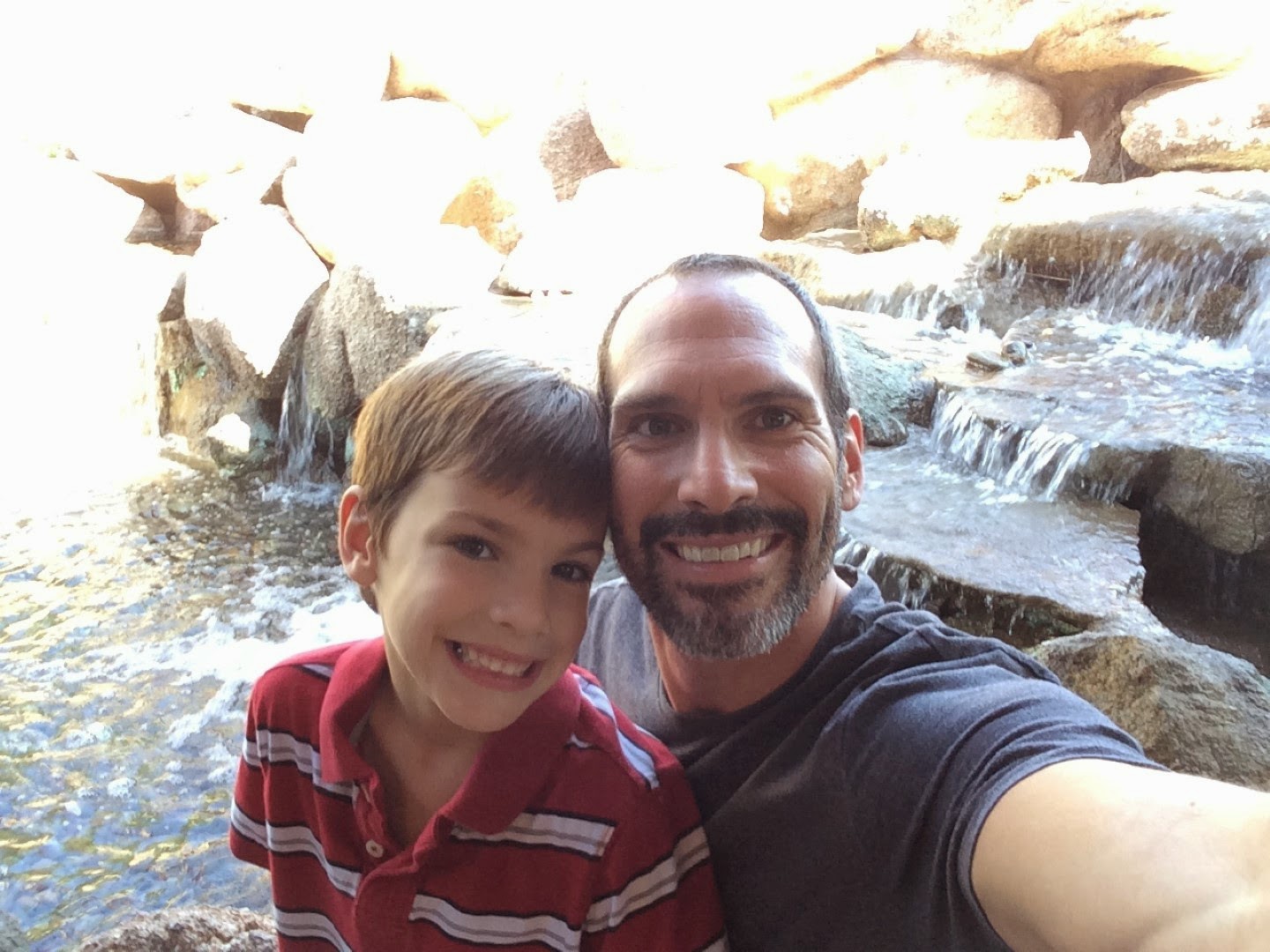 He told Kendra and I, "I ask a lot of questions now, but I'll stop when I turn 10, ok?"  "No!"  We responded.  "Don't ever stop asking questions.  that is how you learn."  we both told him in unison.  He is aware of his inquisitive nature and I hope he never stops.  His mind is blessed with such greatness that finding answers will be key to his success.

We arrived back at the house to find organized chaos.  Our bathroom turned into girly central with makeup flying around like flour being tossed by the Swedish Chef.  random Muppets reference.  Anyway, Layla jumped right in with the hair and clothes preparation. 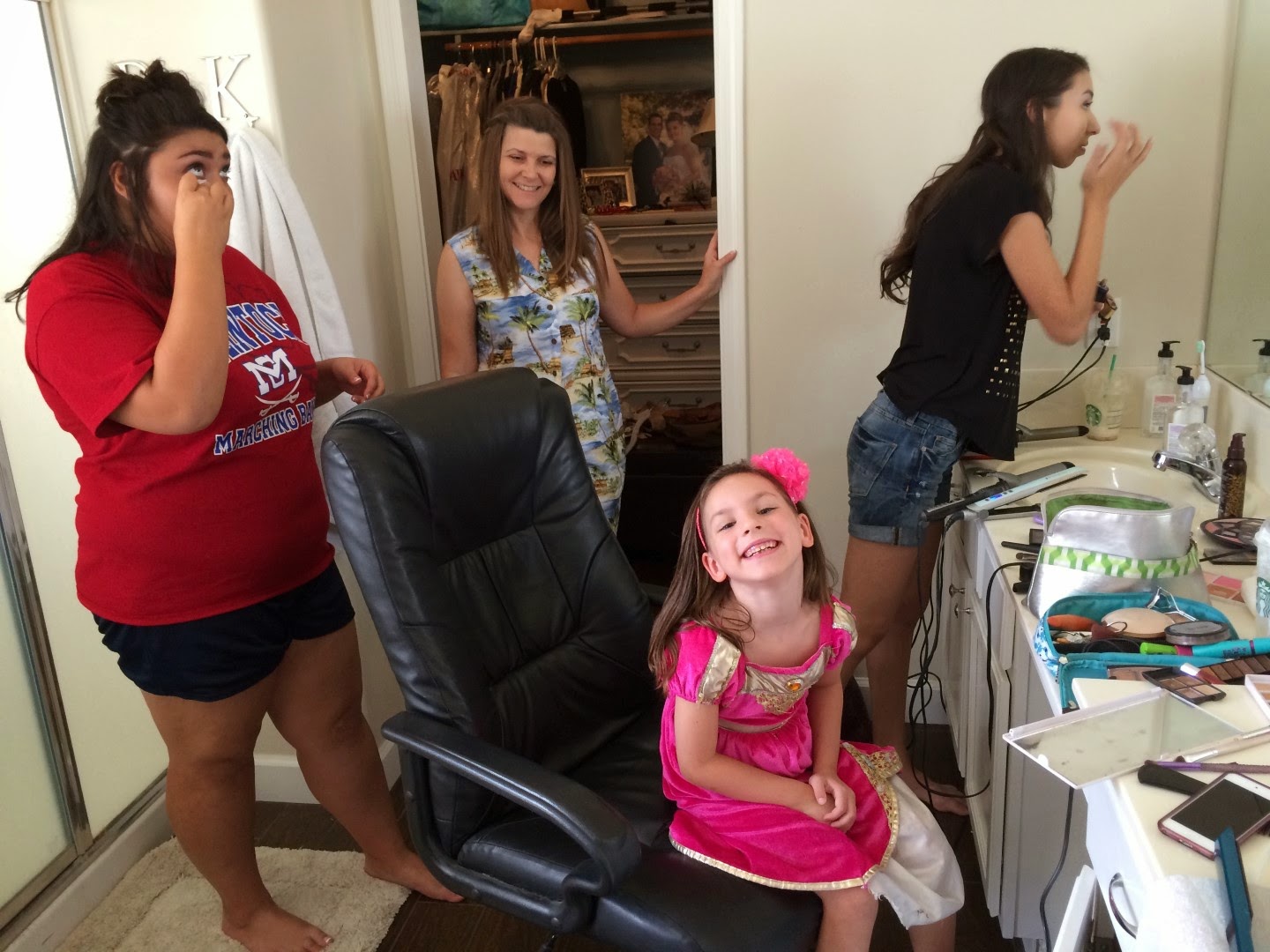 Easton had his first lesson in ironing.  Any guess as to what his favorite part was?  the button that creates steam.  He kept pushing it asking questions about how the water flows, why it creates steam and where did the wrinkles go.  I can tell we will need many more sessions of ironing before he gets beyond the wonder of how the iron works. 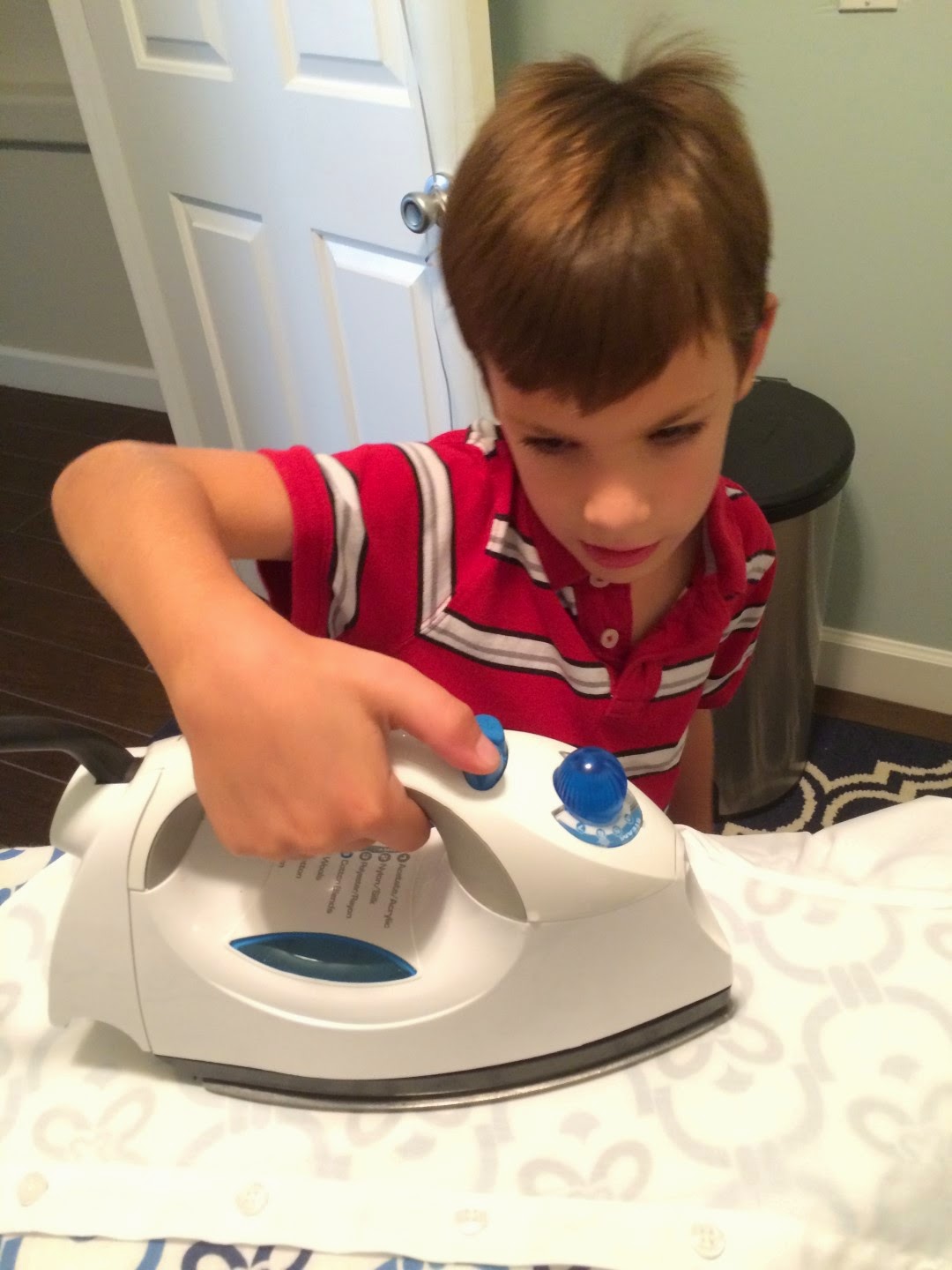 During the ceremony we stood in the back holding each other.  It was like looking at a finished piece of artwork and admiring what was created.  I'll have the wedding pics next post. 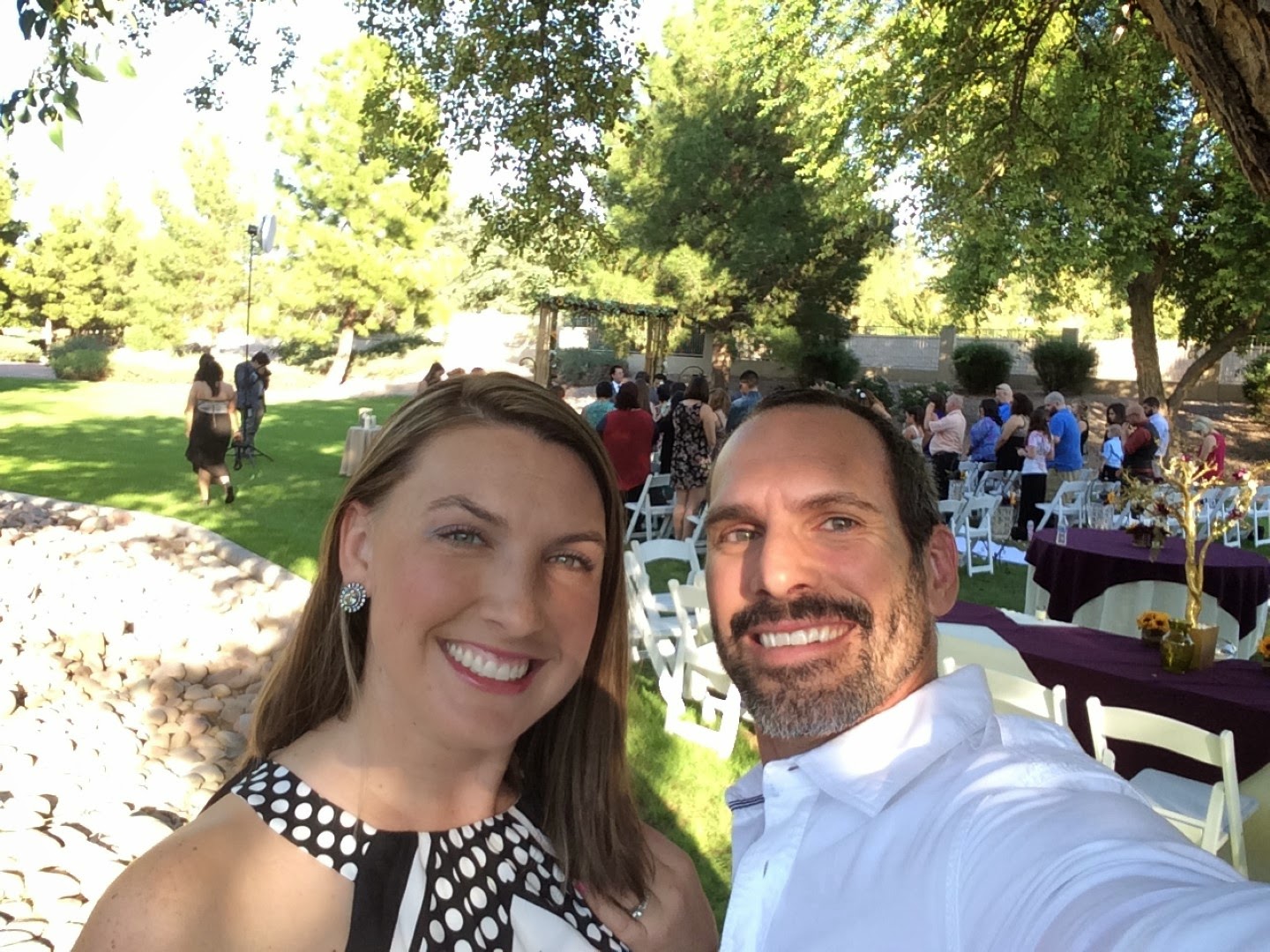