The 4 Webbs are focusing our recreational time on soccer for the twins and mountain biking for Daddy.  Every Saturday we gear up and send the twins out onto the soccer field with 10 other kids to kick a ball around.  They are both in the boys league where Layla is the only girl on any team in their league.  Layla requested to be on the boys league because everybody runs, nobody cries, and nobody walks off the field unannounced whenever they get tired. 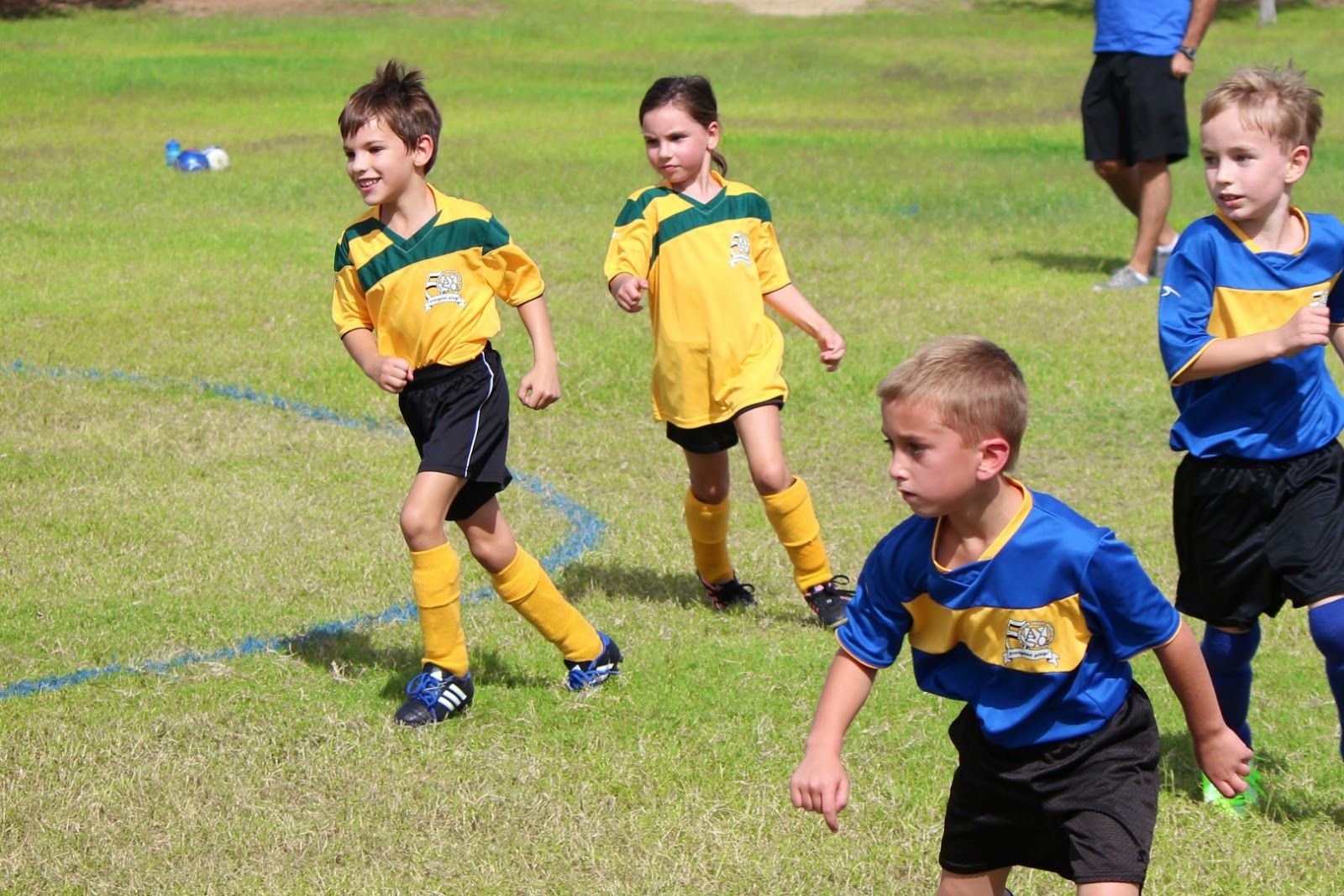 I haul their two-person camping chair, my chair, soccer gear bag, and camera backpack from the car.  They carried their big water jugs (gotta stay hydrated out here in the AZ sun). 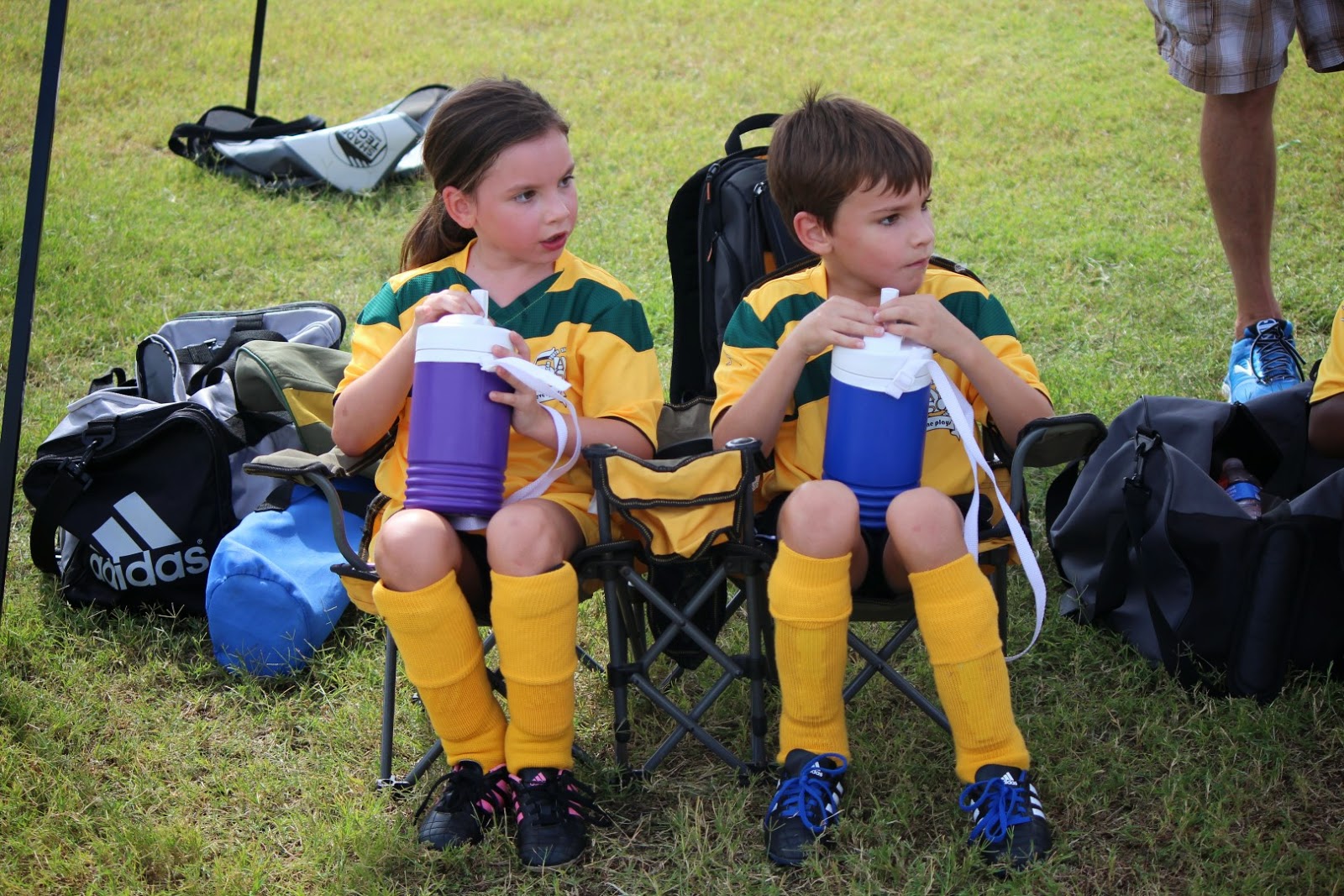 The problem of bunch-ball is still in full effect.  This means all six soccer players within kicking distance of each other.  You might notice there is only one pony tail in the group: Layla.  She isn't what I consider to be a tom-boy, but she is completely comfortable and confident when there are 11 boys and 1 girl on the soccer field.  This is a notable accomplishment because I meet kids every day that can't even pull their eyes up off the ground long enough to greet you with a "hi" because of shyness and/or lack of social skills.  Some people believe social skills = manners.  I've met some well mannered kids that were silent, awkward, or boring.  I don't consider that to be exhibiting good social skills.  I believe social skills = ability to interact with those around you no matter what the circumstance or environment. 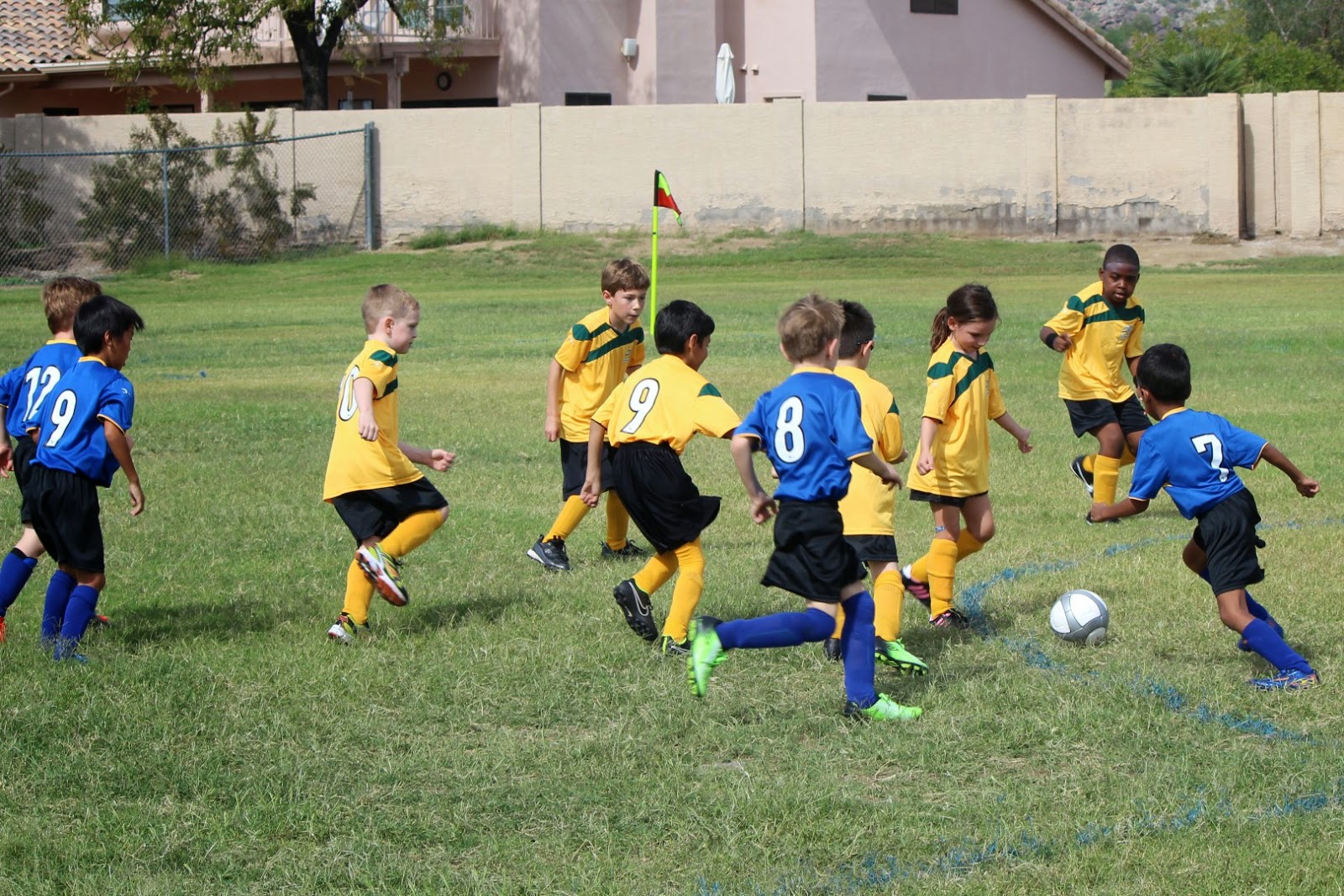 Easton doesn't have a mean bone in his body.  That often leads to a lack of aggressiveness, but he's working on it during practice.  He enjoys the rough and running nature of soccer, but not really into the take-the-ball-away or pushing his way through defenders.  at this point in the soccer league it is still about just having fun so we'll keep him in there as long as he wants. 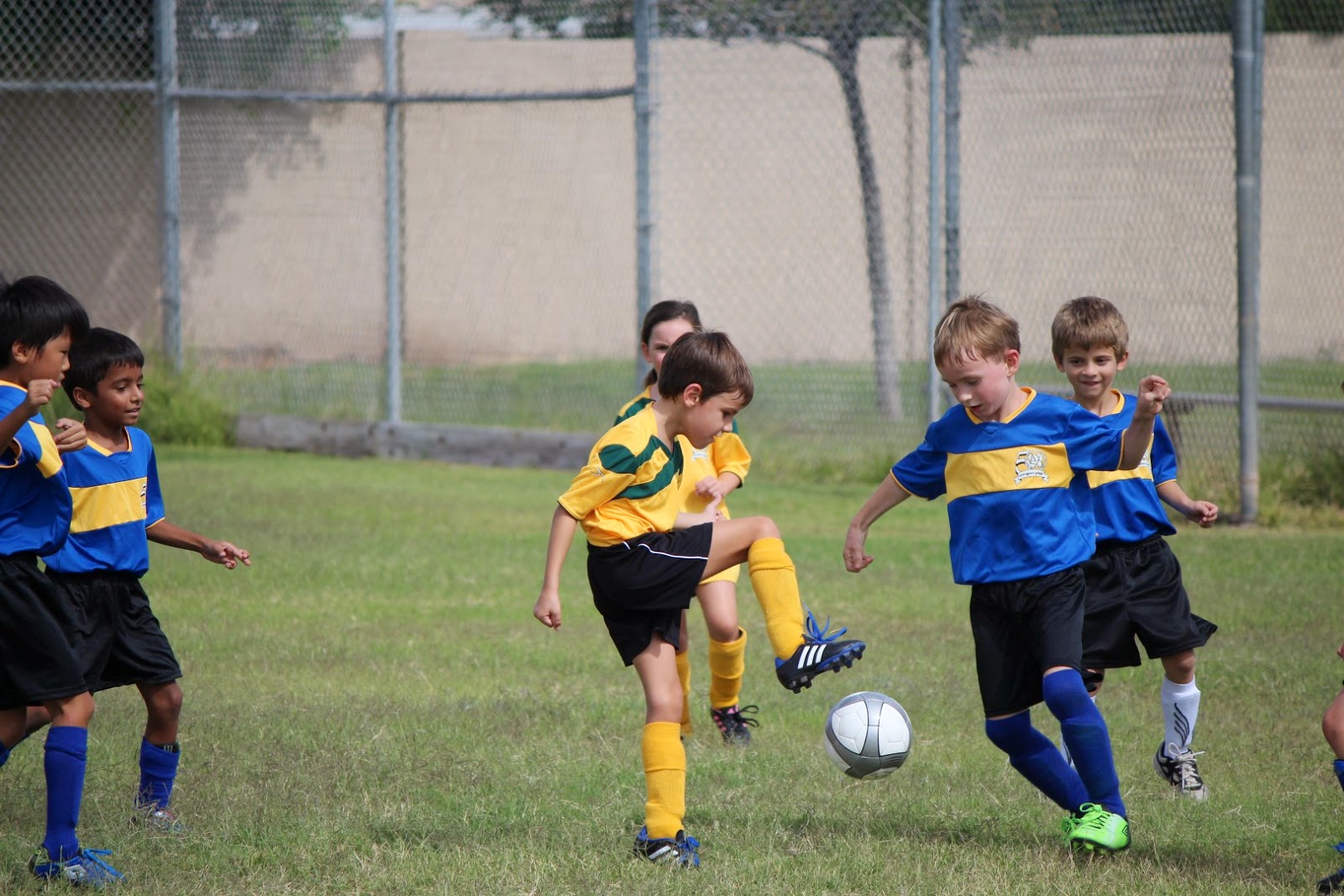 This is by far my favorite picture of the week.  These are genuine championship smiles and postures. After their teammate scored one of his four goals this game (the only four our team scored, by the way) Easton and Layla cheered and jumped.  That's good team spirit! 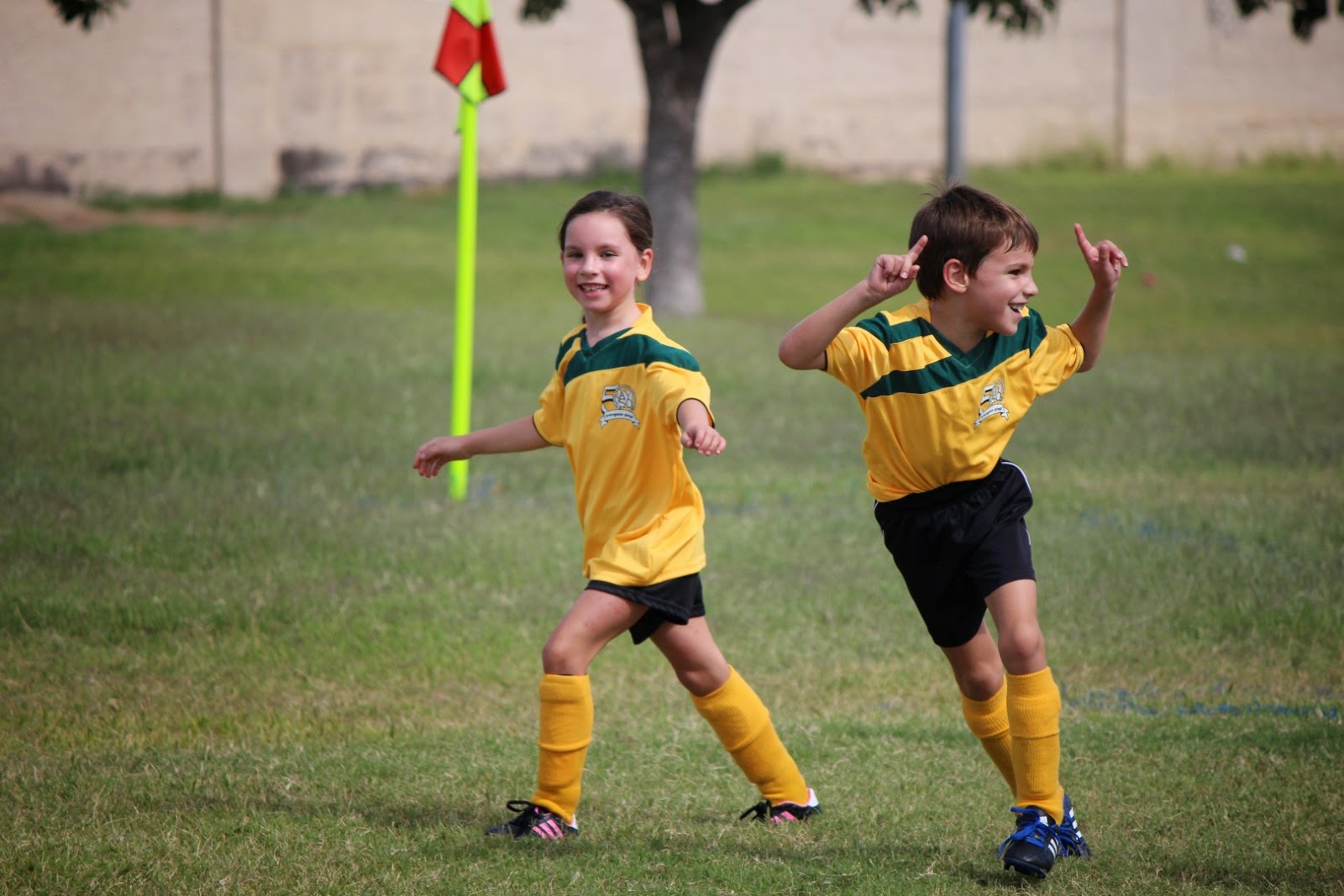 Layla is always aware when I'm on the sidelines.  I watch intently the whole game and I know they see whether I'm paying attention to them or not.  Layla took the time to leap and pose for me as she headed back down field after a goal.  She sure is comfortable in front of a camera... imagine that. 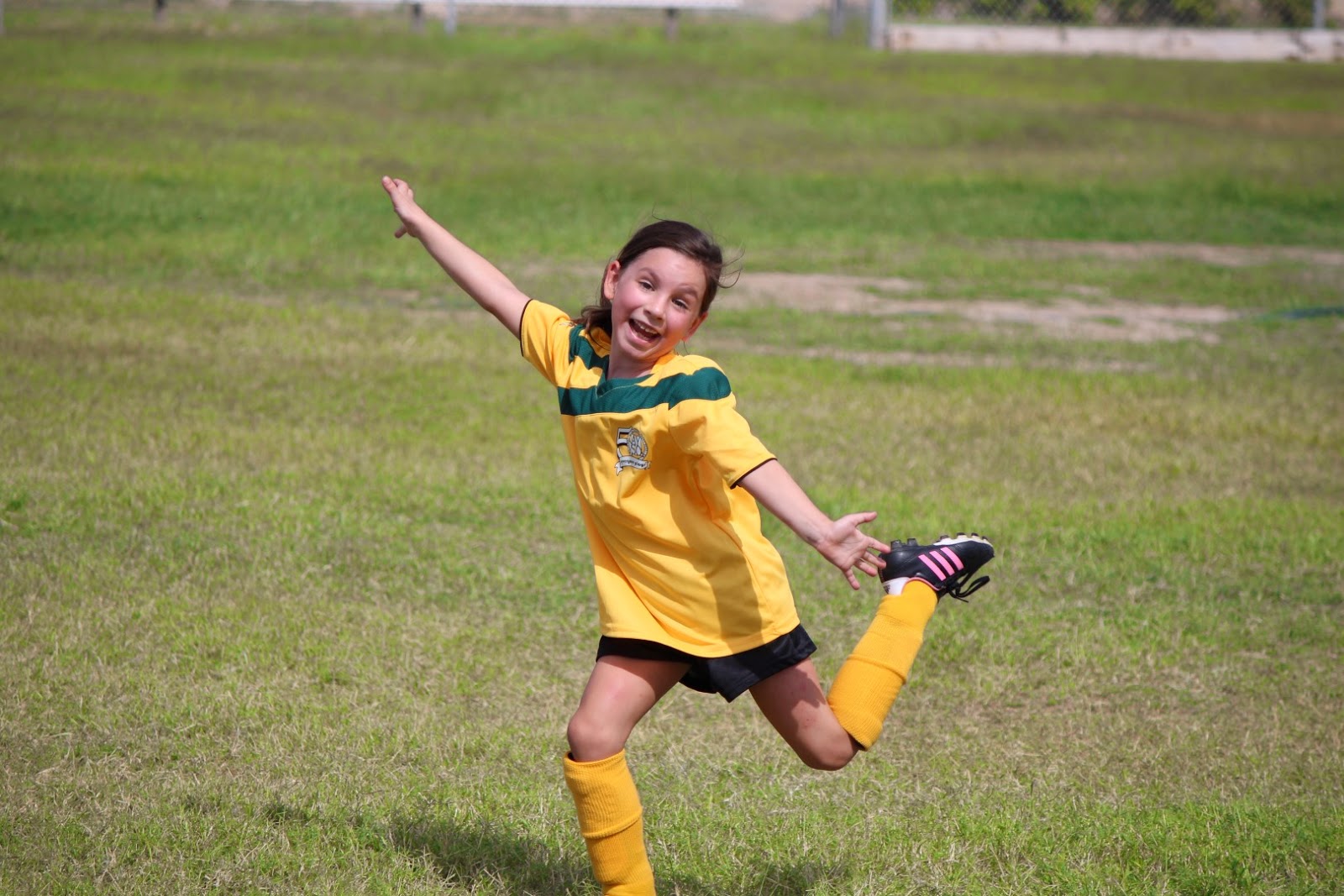 Easton was in and Layla was out one quarter.  I gave Layla my camera and taught her a little more about how to take pictures.  She catches on quick! 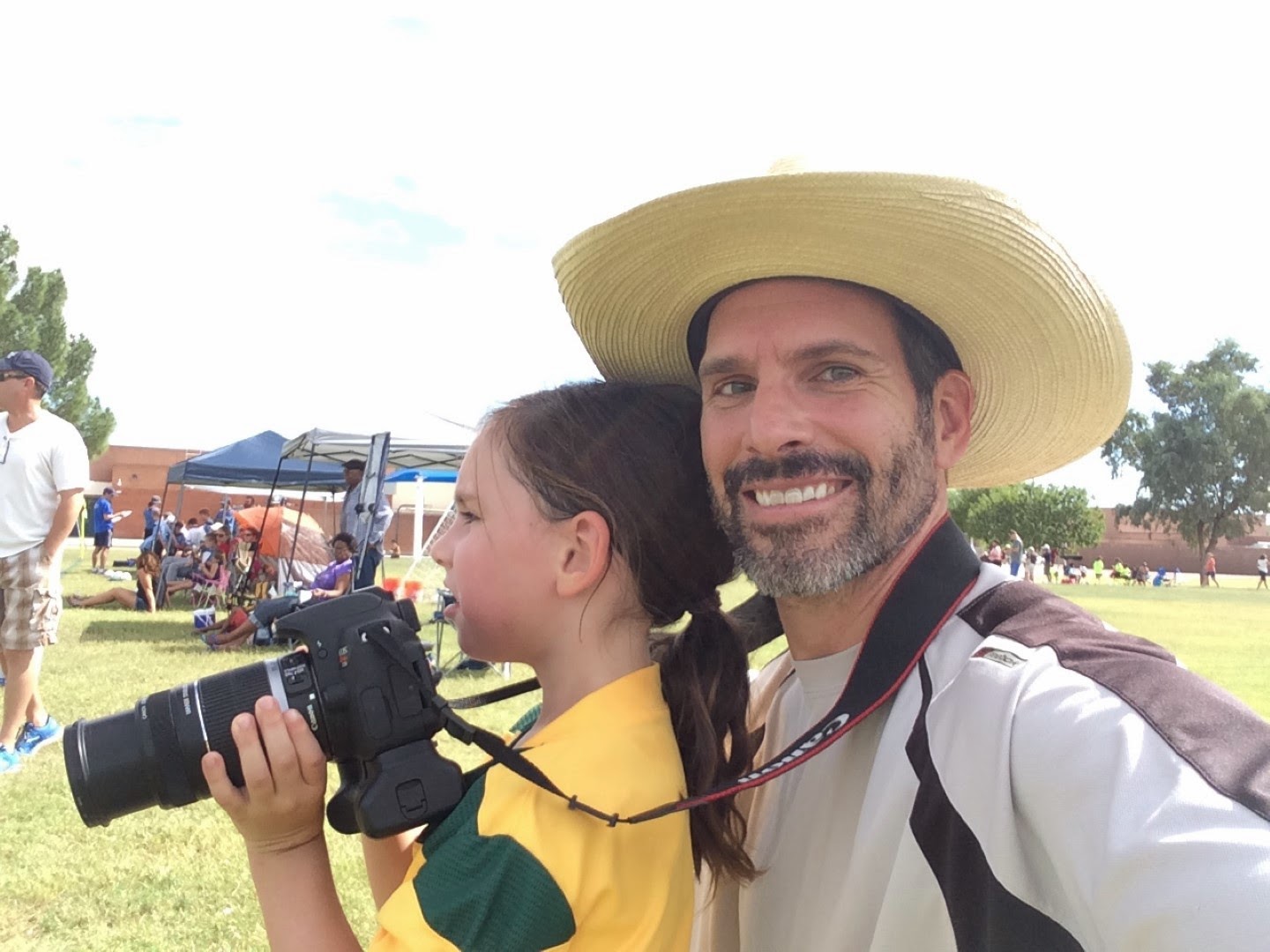 Ouma and Mommy were still gone so we went out for lunch to Firehouse Subs.  I could have pulled something together for lunch at home, but I was too lazy.  The free firefighter hats sparked lots of questions such as: why the brim faces backwards, why they are red, and why there is a dog on the picture. 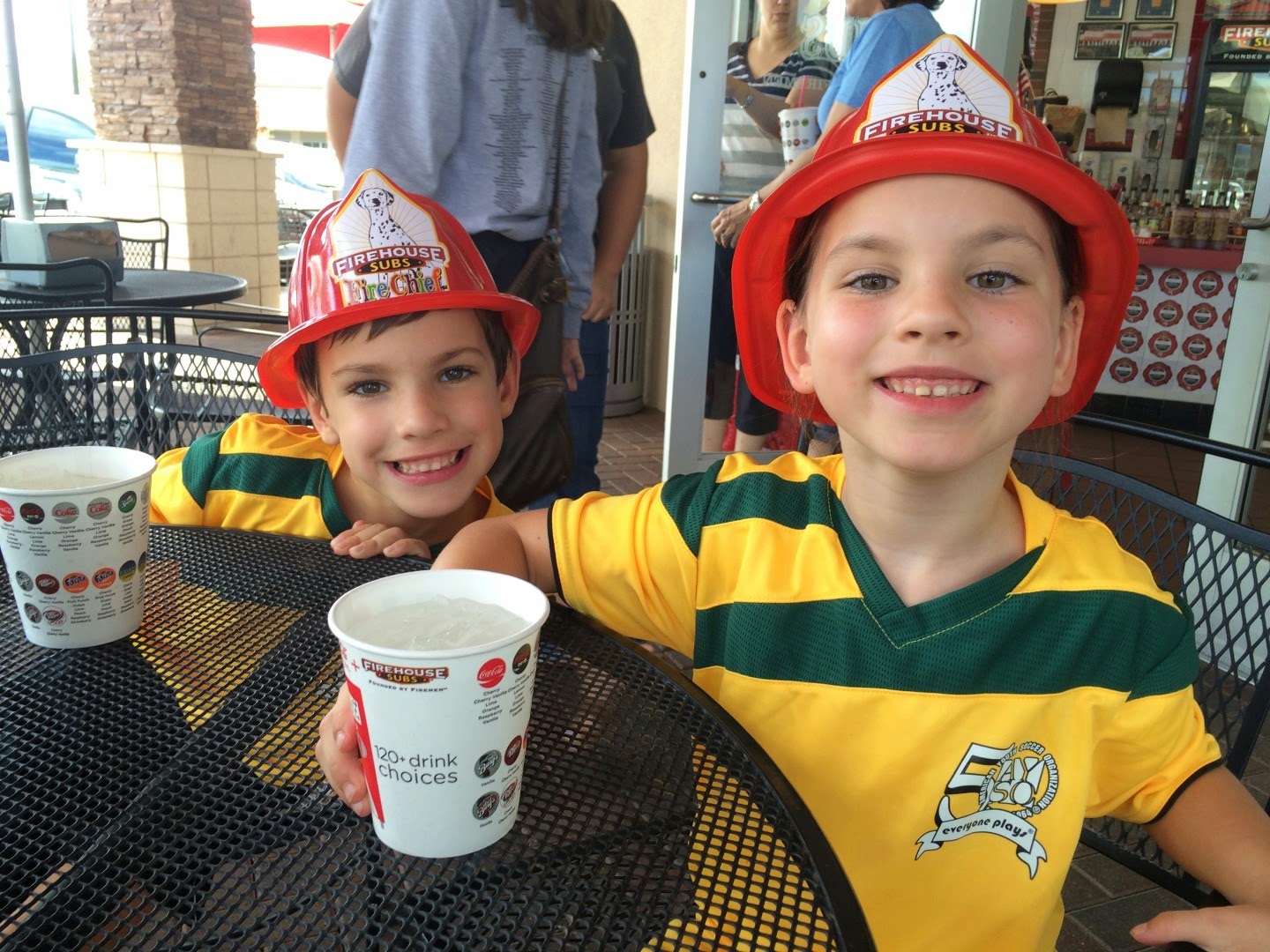 The twins and I spent a few hours cleaning up the house after the disaster from the BBQ.  I could not believe how much seven kids could destroy a house.  I gave out chores and they jumped right in to help.  Layla was very proud of herself for cleaning the windows.  half a bottle of spray and half a roll of paper towels later... 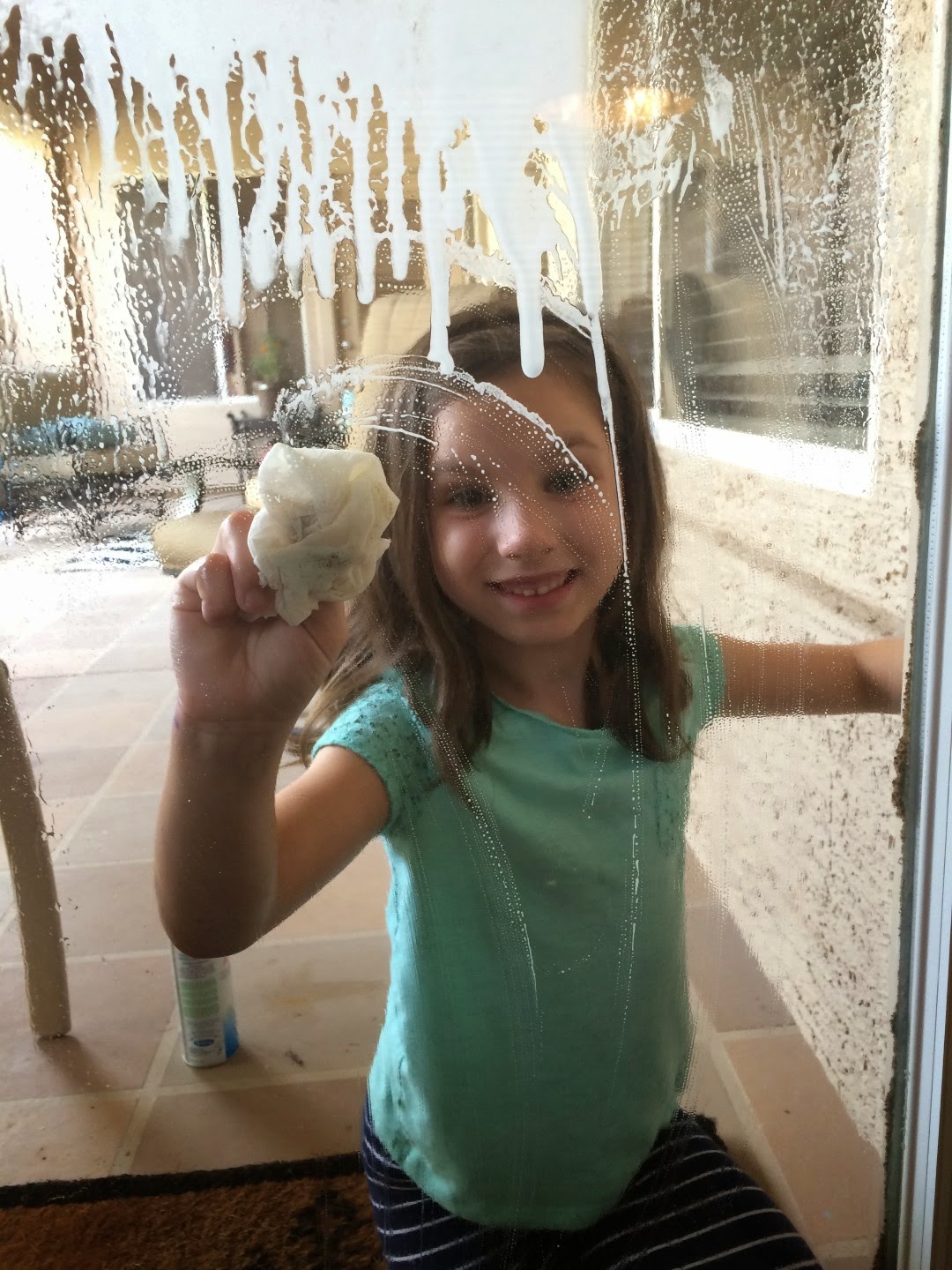 Easton was given the task of dusting.  I remember having this as one of my chores and I disliked it.  not sure why.  It's not a difficult job or dirty or gross.  just something about it that led me to do it begrudgingly.  This was a momentous day because I happily gave the mantle of dusting responsibility to Easton.  He's now the official duster of the Webb house. 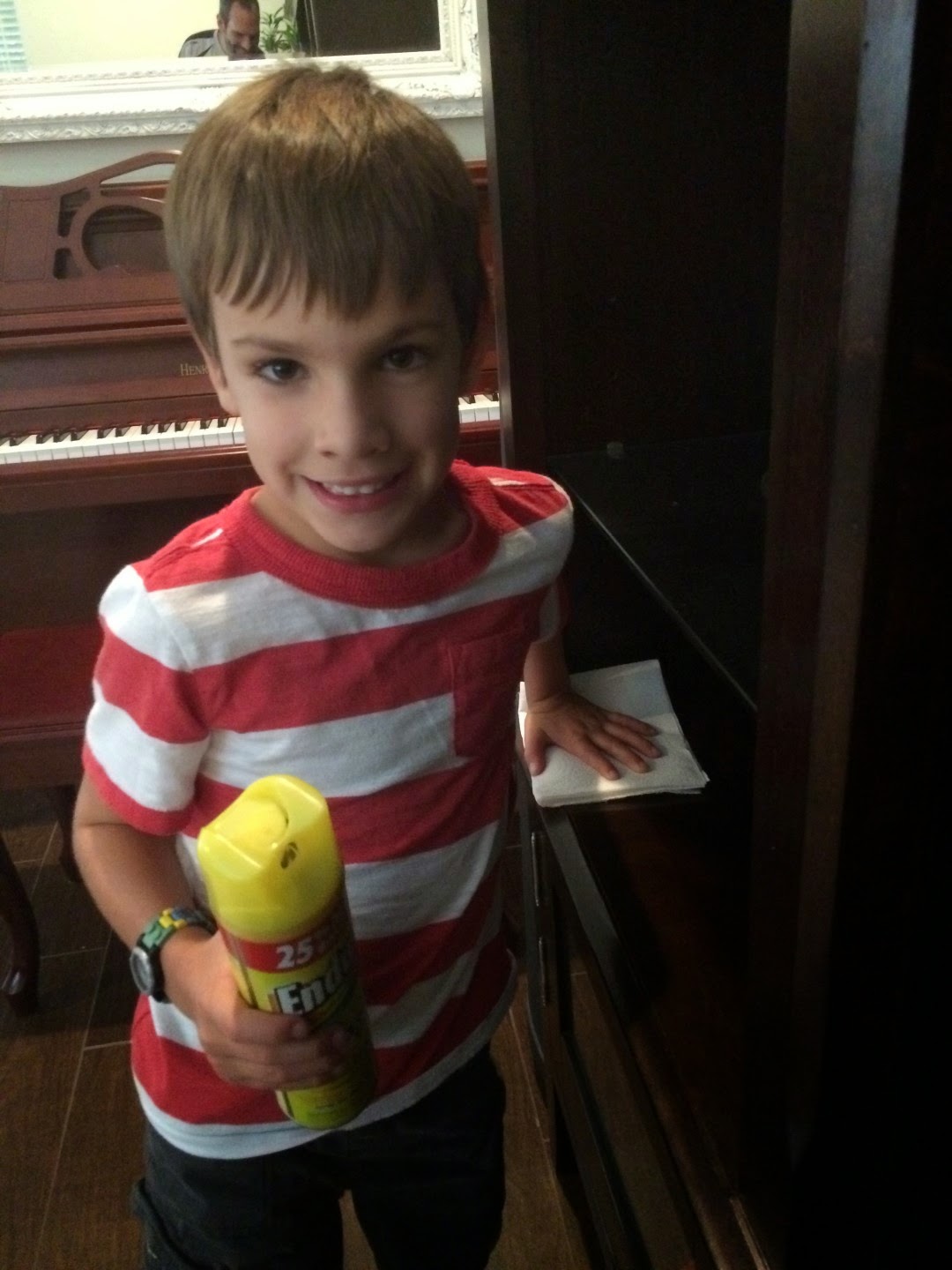 The 48 hours of Daddy time without Ouma and Kendra was a great success in these ways:

the house didn't burn down
the house was more cleaned after they returned home than before they left
the twins were content with the quality and quantity of Daddy time
nobody was sick, injured, or puking
several memorable moments and lots of laughs shared