We are burning our candle at both ends having an awesome time with my family.  I have an entire picture roll to go through, but first allow me to critique my own parenting actions.  The sleep schedule I diligently manage for the twins has held solid for the past 4 years or so.  Once in a blue moon I let the twins stay up past bedtime to enjoy a special late-night event.  However, their sleep schedule during this trip was obliterated.  Out of the past 13 nights the twins have been in bed by 8:00 exactly zero times.  That's not the concerning part though.  I'm reasonable.  I'm flexible.  A little shift here and there doesn't create lawless children, but 11:00 pm for a bedtime of a six-year-old is way out of bounds for my comfort zone.  I tolerated a few melt-downs that would never happen under normal circumstances, but these past two weeks were anything but normal.  If I had to do it over again I would spread out the late nights by sprinkling in a few normal bedtimes.  Other than that, I would keep every fun-filled evening exactly as it happened.

OK, i got that confession off my chest and now it's on to adventures.  This year has not included a full 7 days of no-work and all kids until now.  One of the best parts of this trip was waking up late, lazying around our pajamas and just hanging out together.  Layla and I had breakfast on the back yard patio together.  Her cherry lips are the same shade as a real cherry. 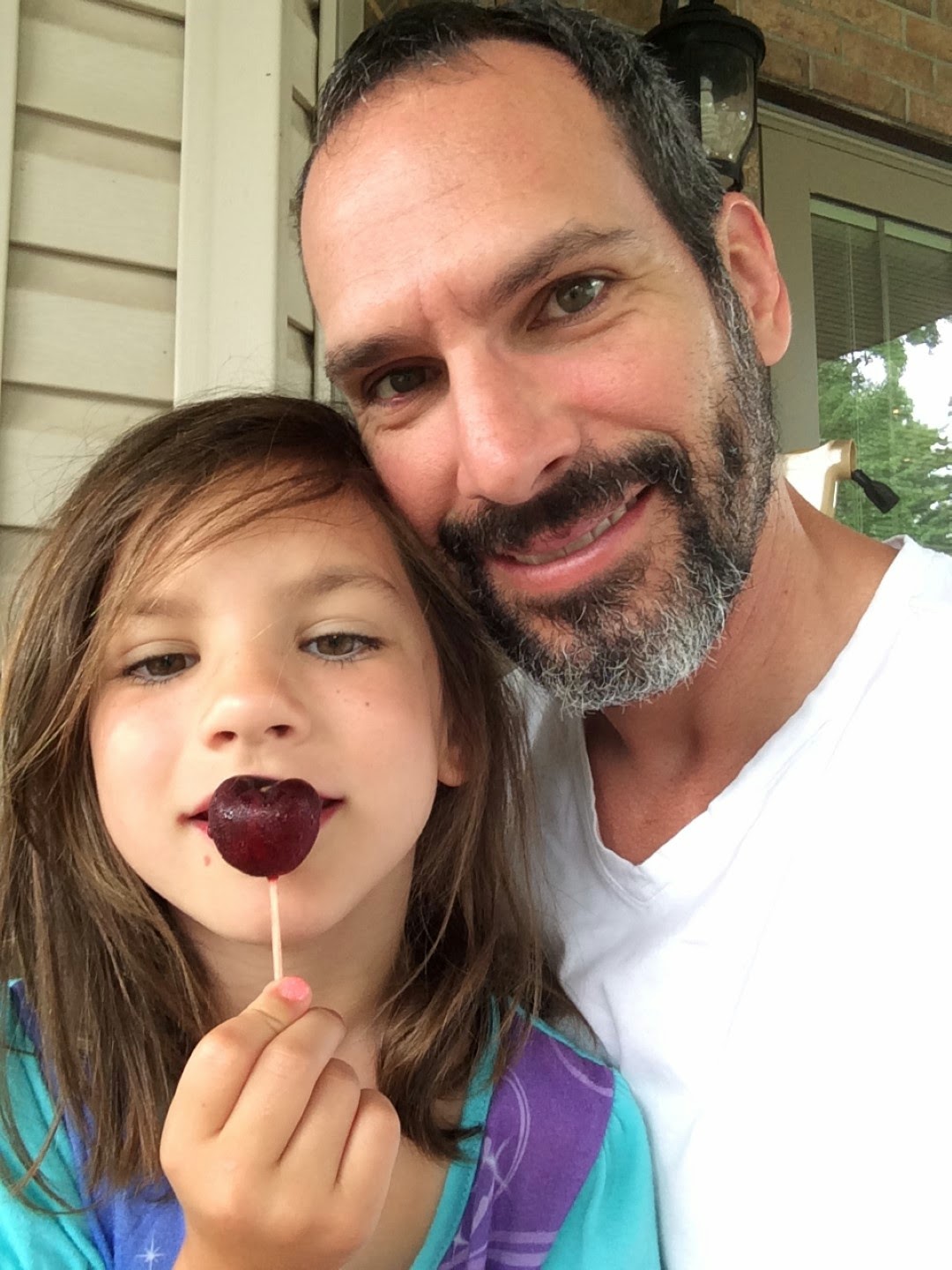 My mom fixed a whole turkey, potatoes, and homemade gravy for lunch one afternoon.  It was like Christmas in July.  A classic Webb trait being passed on to Easton was fully displayed as B.J. picked black olives from the bowl before dinner.  Easton came by a minute later and did the same thing!  I caught him red handed, but didn't have much of a case to stand on since B.J. was still munching on his stolen black olive. 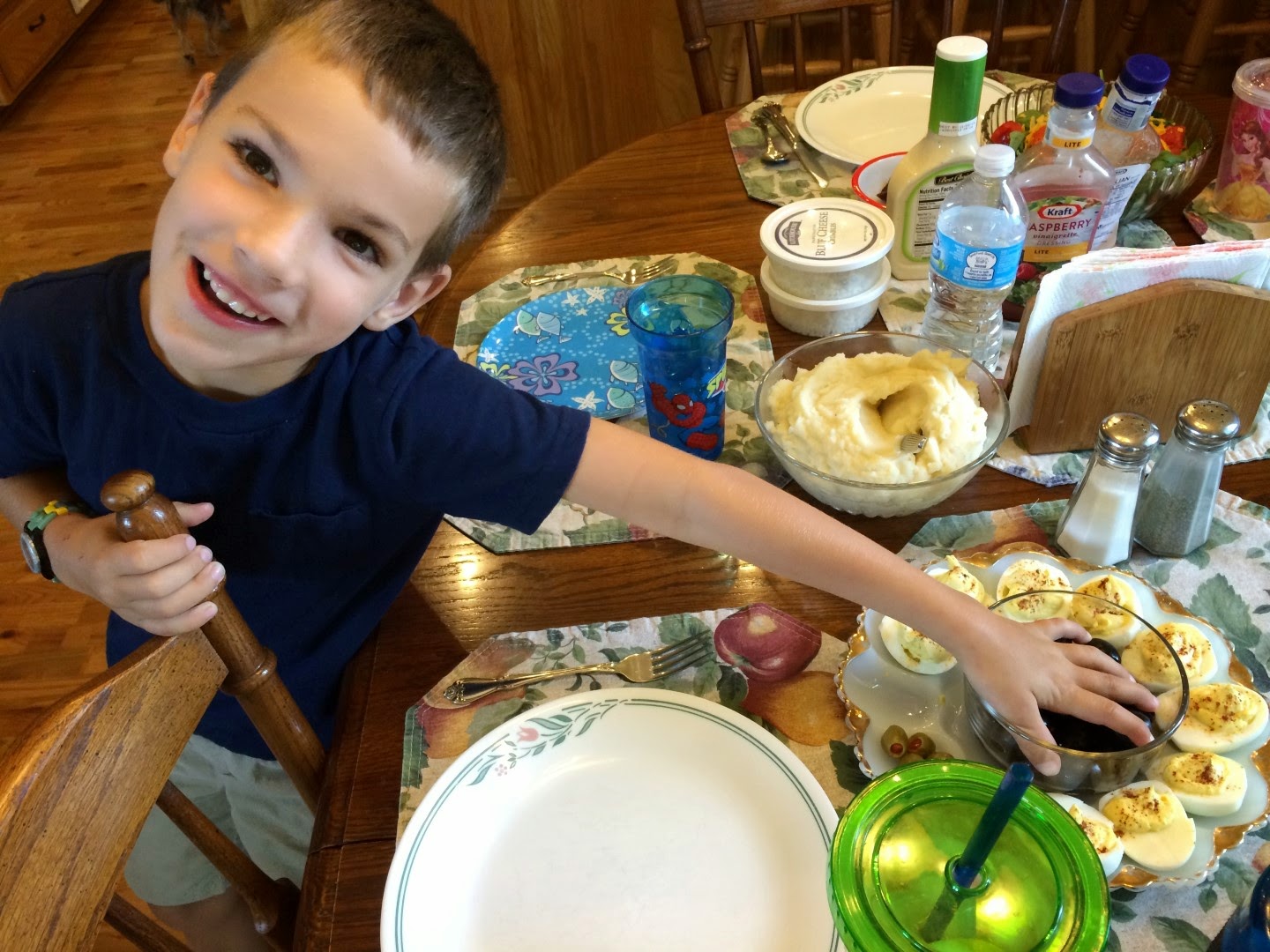 My friend from high school, Matt, and I had some memorable times at his cabin on Table Rock Lake.  I was hoping to get our families together while we were in town.  He offered to spend an evening on the lake and I quickly accepted his offer.  After the infamous pontoon incident last month at the Lake of the Pines where Easton and Layla thought they were going to drown, they were willing to get on the boat when they saw it was an open bow Crown Line.  they were a bit skittish every time the throttle would drop the front of the boat downward, but after a few times of not drowning they were happy as clams. 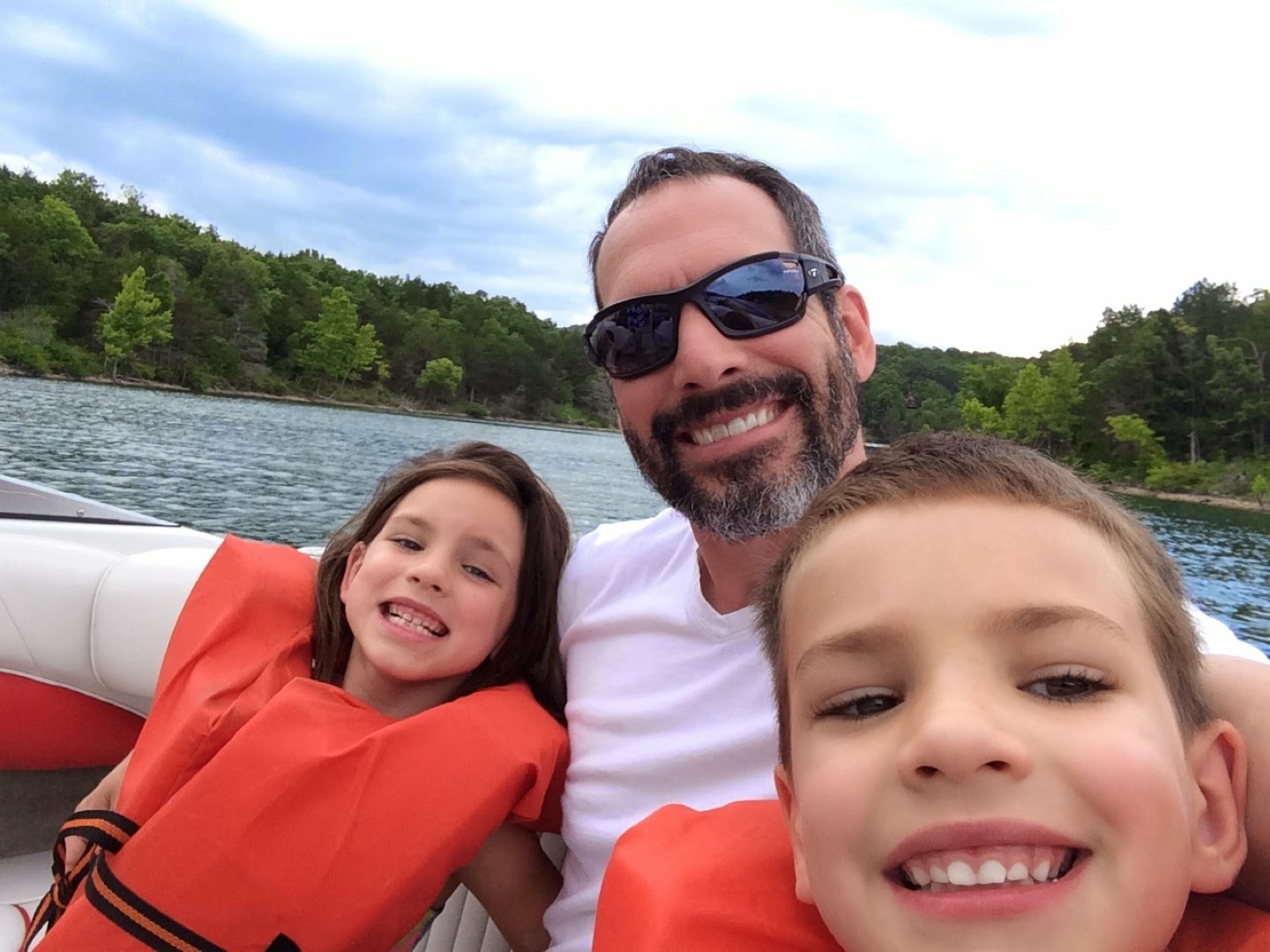 Matt's daughter, Claire, was... boisterous.  OK, she was extremely loud.  Not obnoxious, but she knew how to use her outside voice very well.  It made for an extra fun time because I could hear Easton and Layla testing the boundaries of their own crazy loudness as they tried to keep up with her.  We were going very fast on the water as you can see by the hair and smiles and wake in this picture. 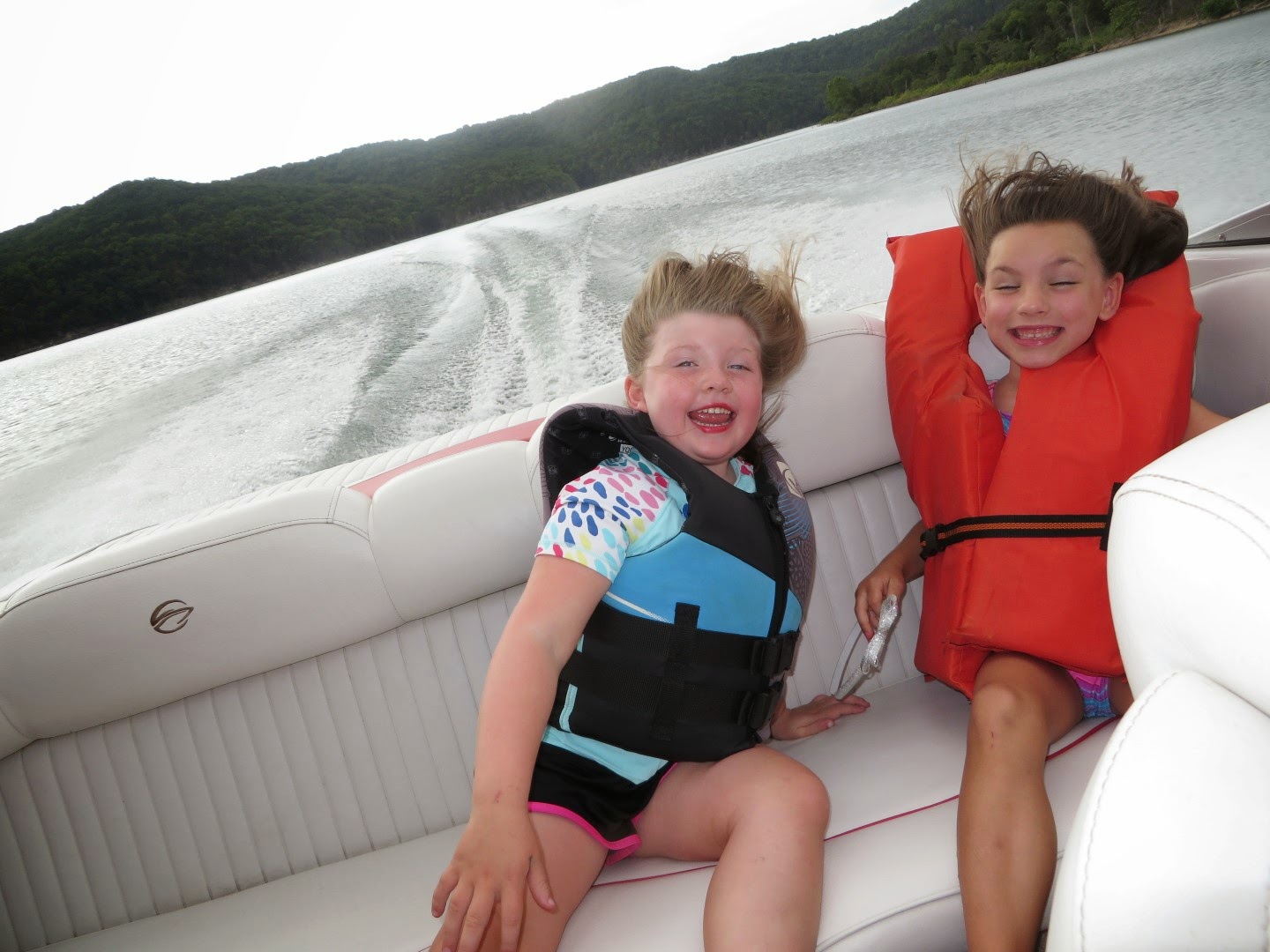 There were moments of serenity as we tucked back into a calm cove for some swimming and sun-soaking.  the mid-week trip made for an extra smooth evening on the lake because there were very few boats with us. 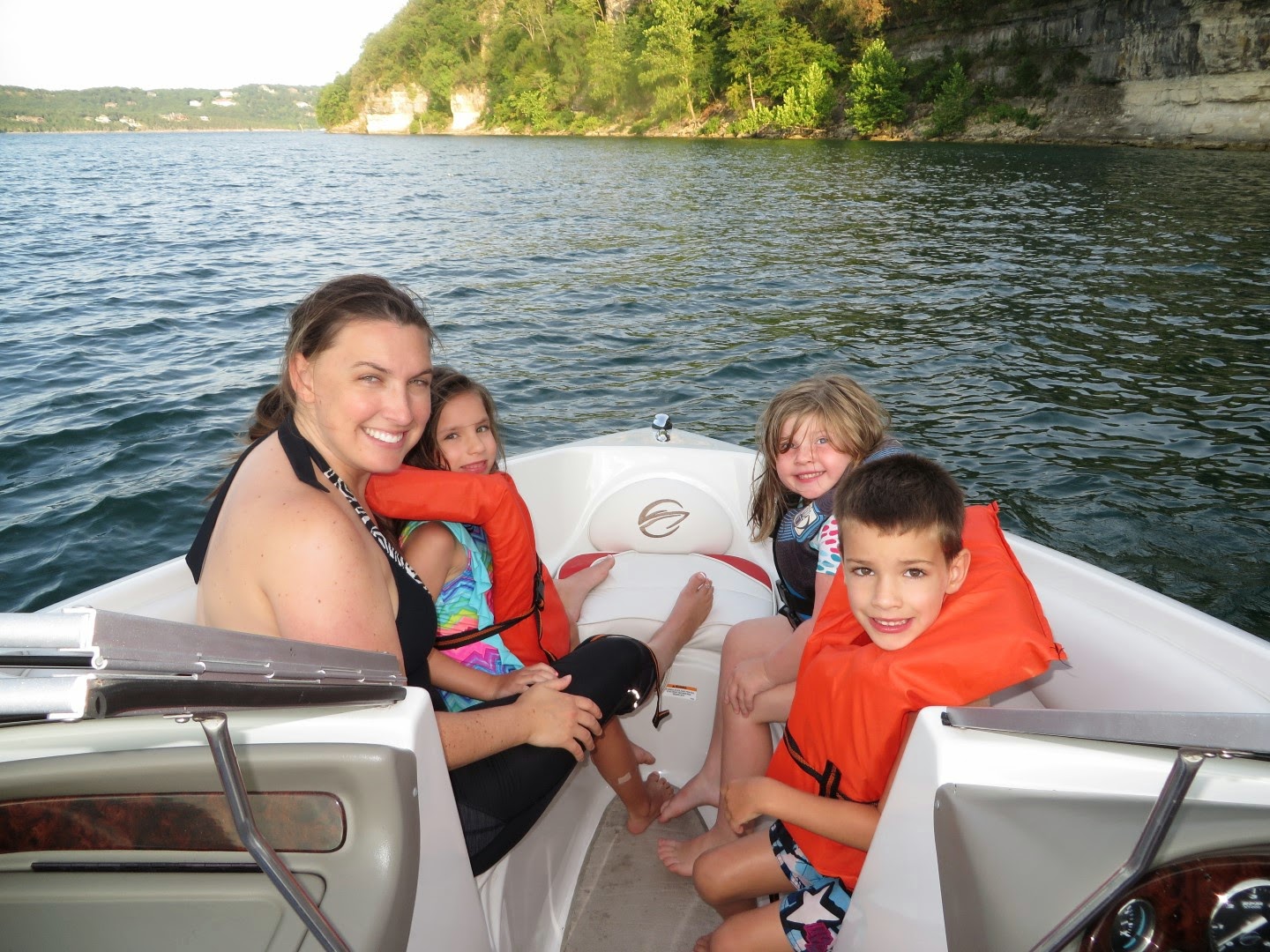 Kendra stayed in the boat because the only reason she is willing to get her feet in the lake is if there are skis or a wake board attached to them.  The rest of us floated around like corks.  I have a life jacket strapped on backwards so i can sit and float like a pro.  Easton and Layla had the old-school style of life jackets that worked just fine. 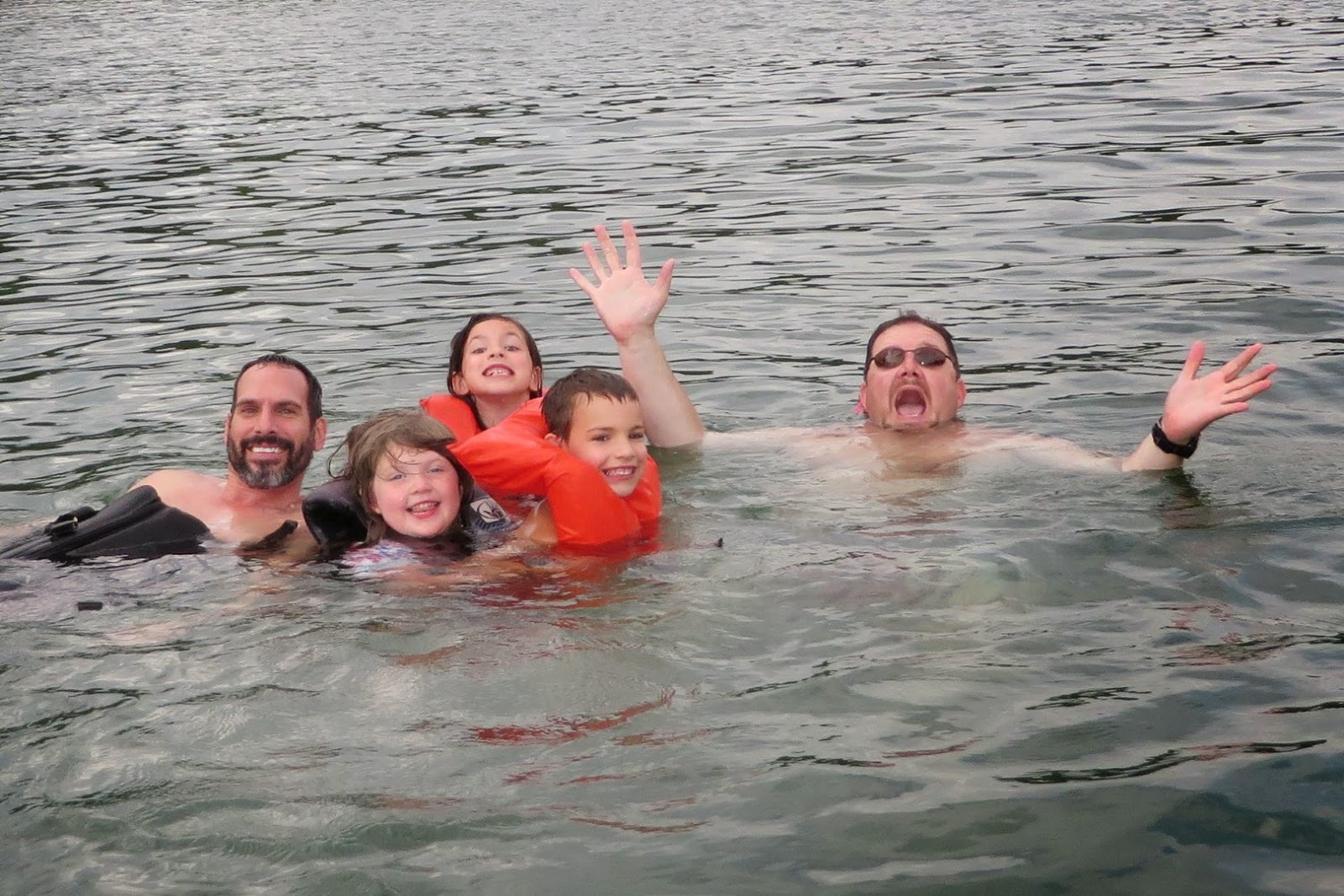 We skipped across the water towards the sunset as the trip wound down.  Kendra on a boat in the lake is one of her many "happy places".  Seeing her enjoy herself and holding my sweet Layla was picture worthy even without the great sunset. 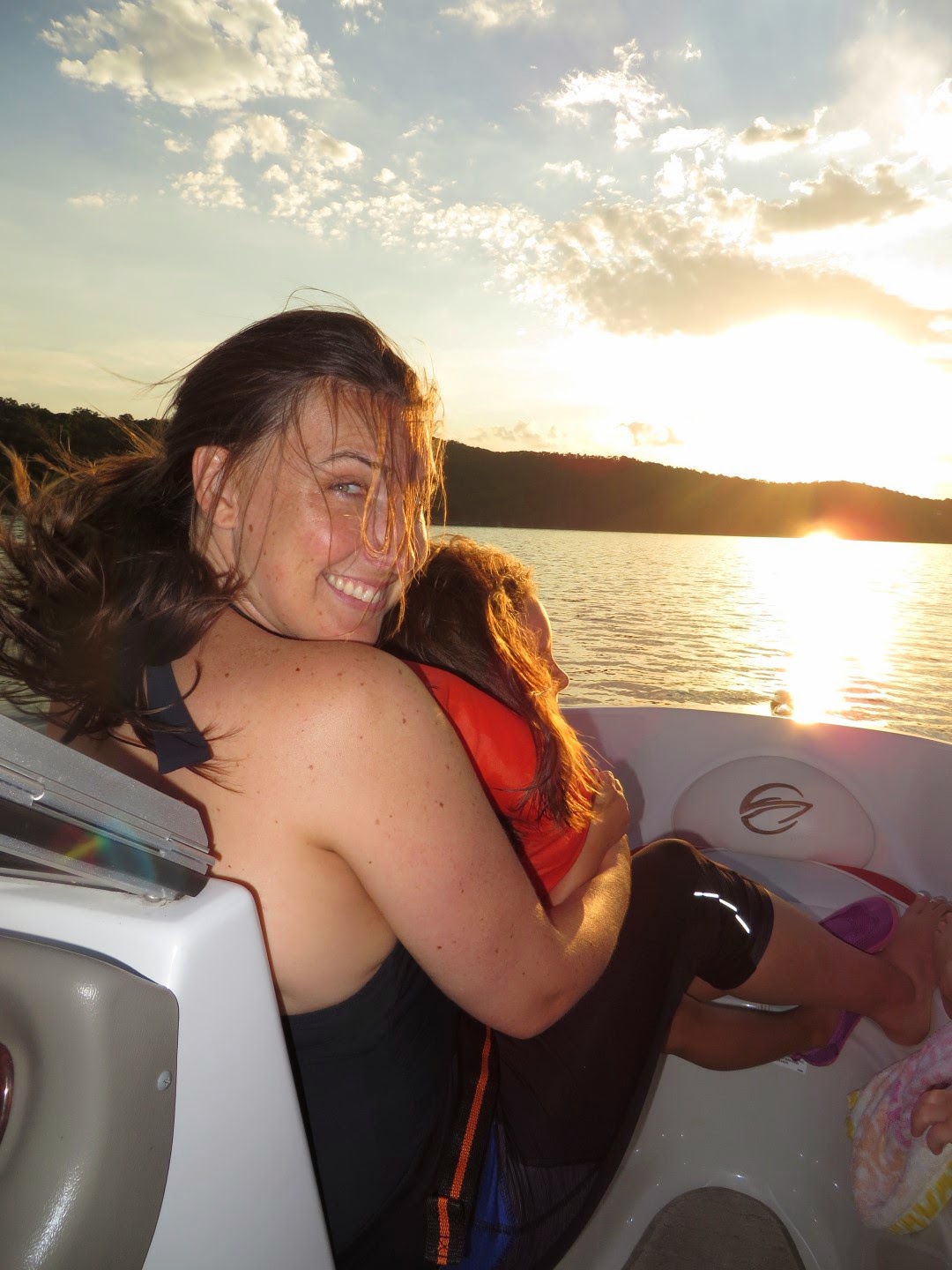 After leaving the lake we realized it was really late and we were really hungry.  tired and hungry is not a good combination for me or the twins.  We drove a few miles out of the way through Reed Springs to eat at Pop's Dari Dell.  I don't even know what that means, but that's the way they spell it.  the hole-in-the-wall diner is where Matt and I would go for grub when we spent time at the lake house when we were in high school.  As we pulled up to the old-school place I had a flood of memories flash through my mind.  Kendra and the twins loved it. 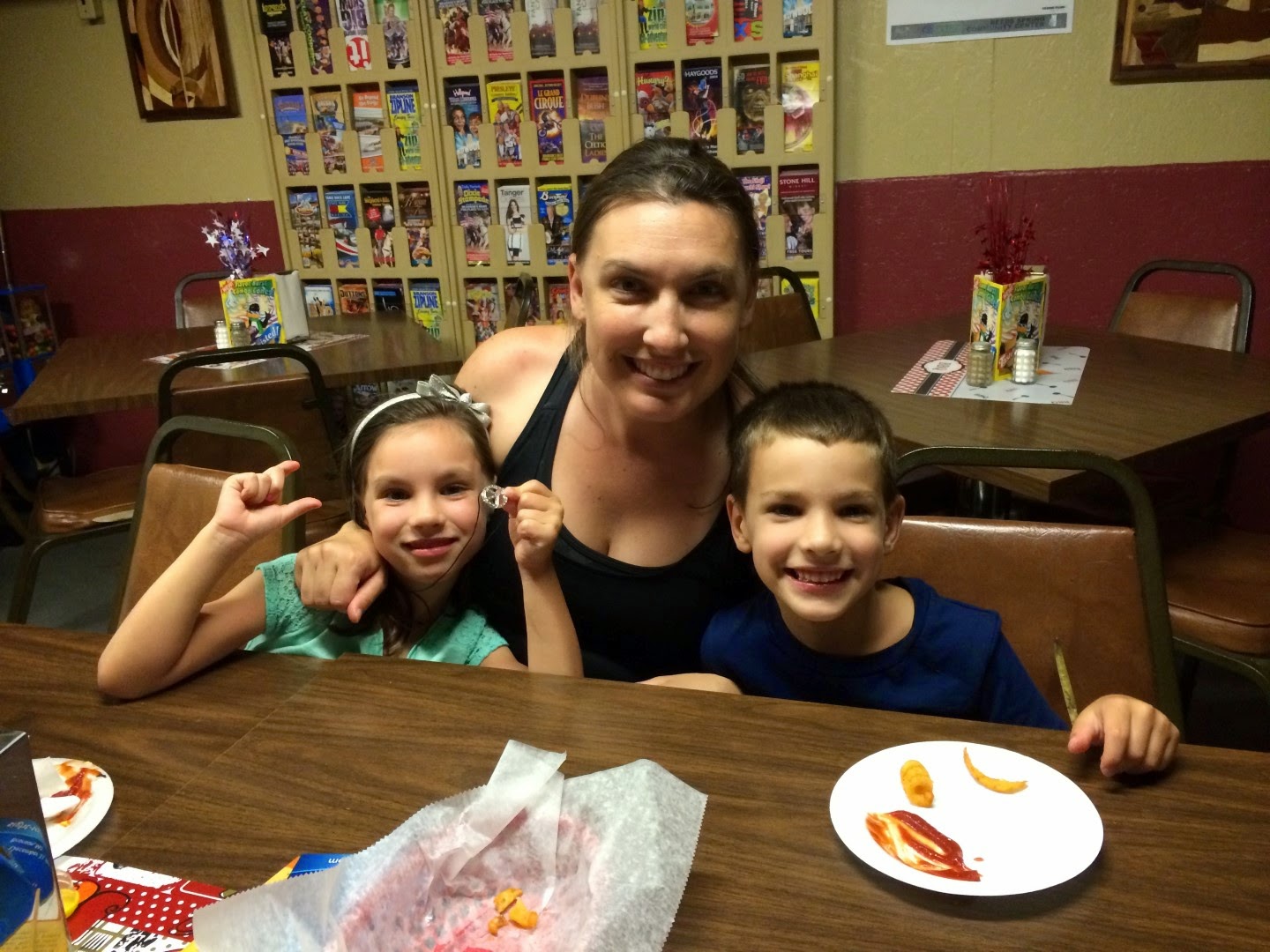 and I got a good picture of my buddy Matt and I in front of the store.  The only thing missing from this picture is my friend Ryan.  One of the only disappointments of this trip is my lack of connecting with Ryan.  He was the third amigo for our adventures and it wasn't the same without him. 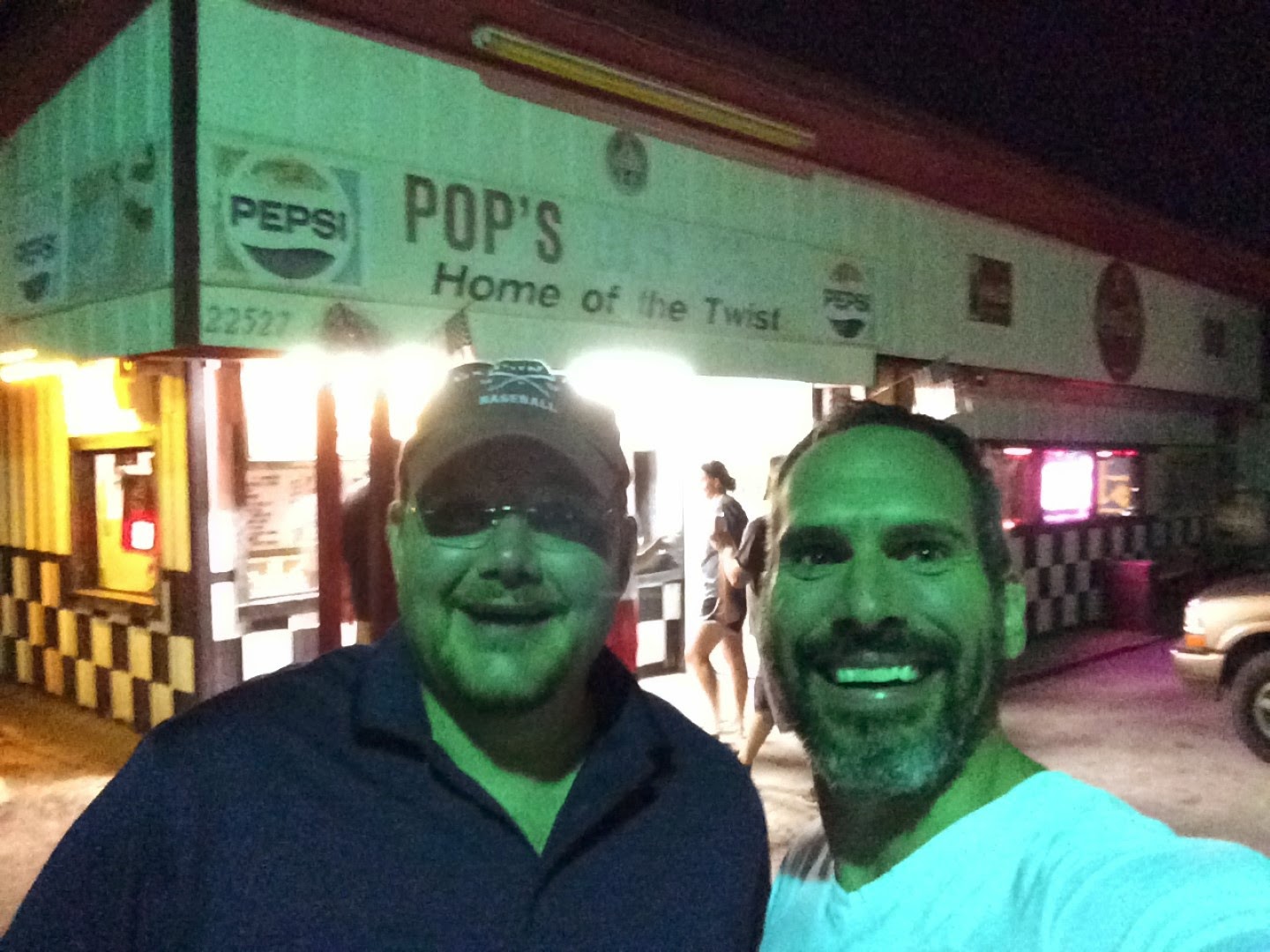 The lake trip resulted in yet another late night for the twins to slump into bed around 11:00 or so.  Totally worth it though.

I've only had sibling-only time with my brother and sister (no kids or parents or cousins) a couple of times in the past decade.  Once last year and then...  I can't even remember about the time before that.  This time we included our spouses, which created a whole new dynamic with B.J.'s girlfriend/fiance/wife Lindsey.  She's swell.  I'm happy for B.J. because he's happy.  I've never seen him have the freedom to be affectionate and loving before so it took some getting used to.  I did a double-take several times watching him hold her hand or steal a kiss while walking through a crowd.  It's refreshing to see my brother being himself with Lindsey, who encourages him.  Our time together during these few hours is a highlight of my trip! 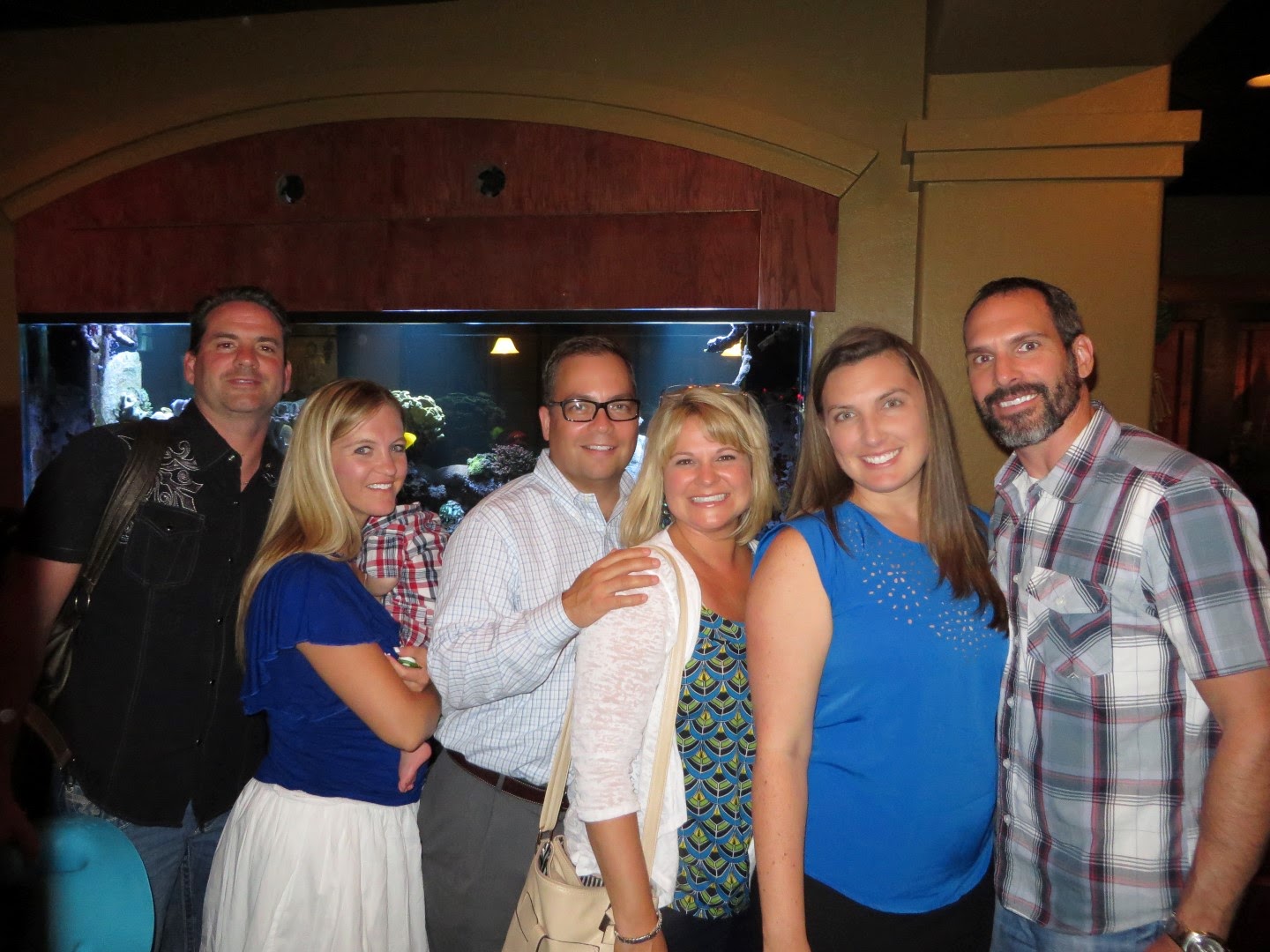 The 4 Webbs were introduced to Mom and Dad's dog, Molly.  She is the 14th dog of their marriage.  We have a betting pool on how long she'll last in the Webb house.  Easton and Layla like her very much.  She licks them on the mouth and they don't care. 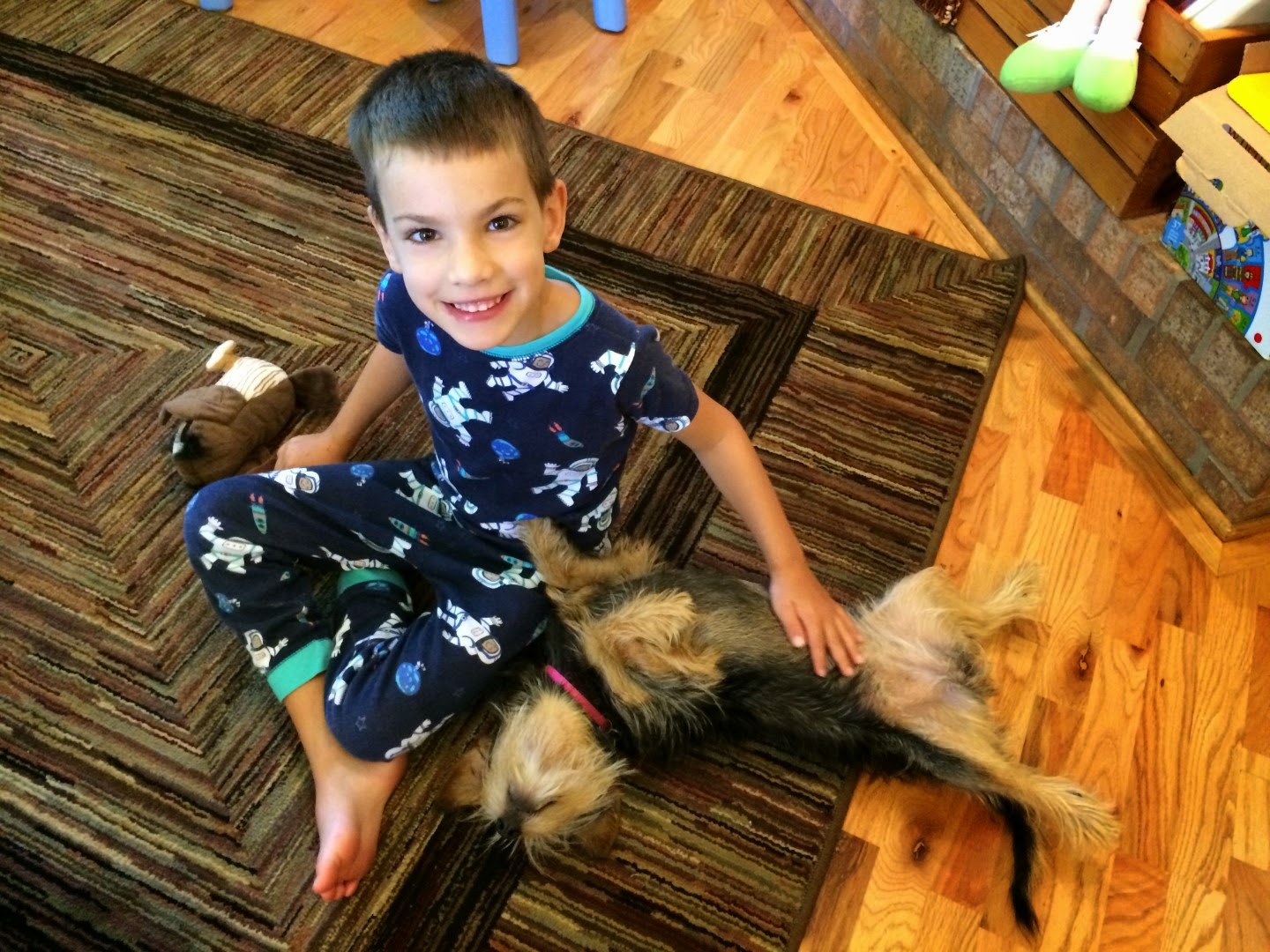 We spent a few afternoons at various aquatic centers as a way to beat the heat during these dog days of summer.  Kendra had the opportunity to hold Beckham.  I'm always happy for her to hold other people's babies because I she gets her baby fix.  As adorable as he is, she still said, "I don't want another one so don't worry." 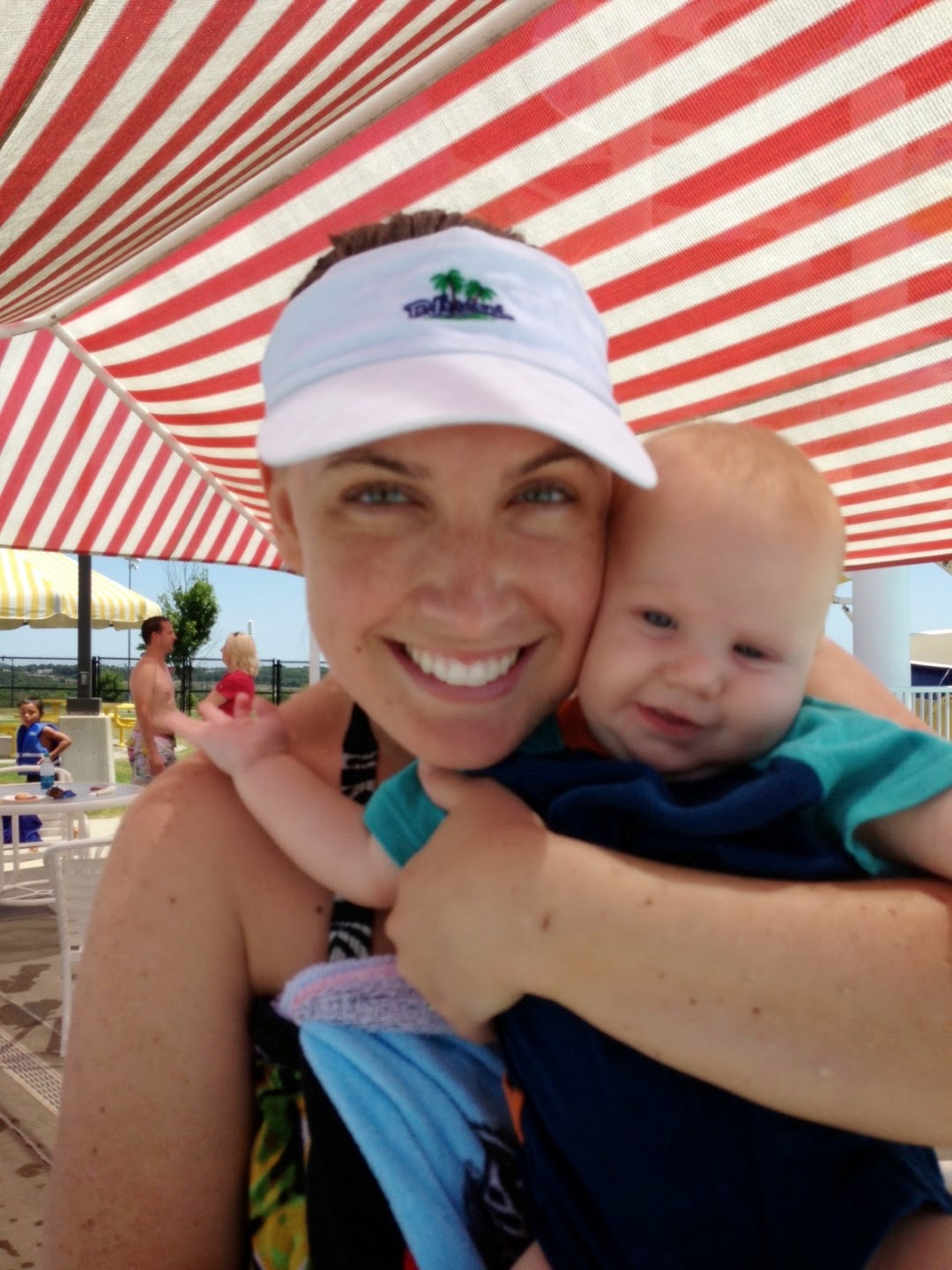 Layla loves to swim and be social with her cousins.  When she's not talking she's holding her breath while swimming across the pool. 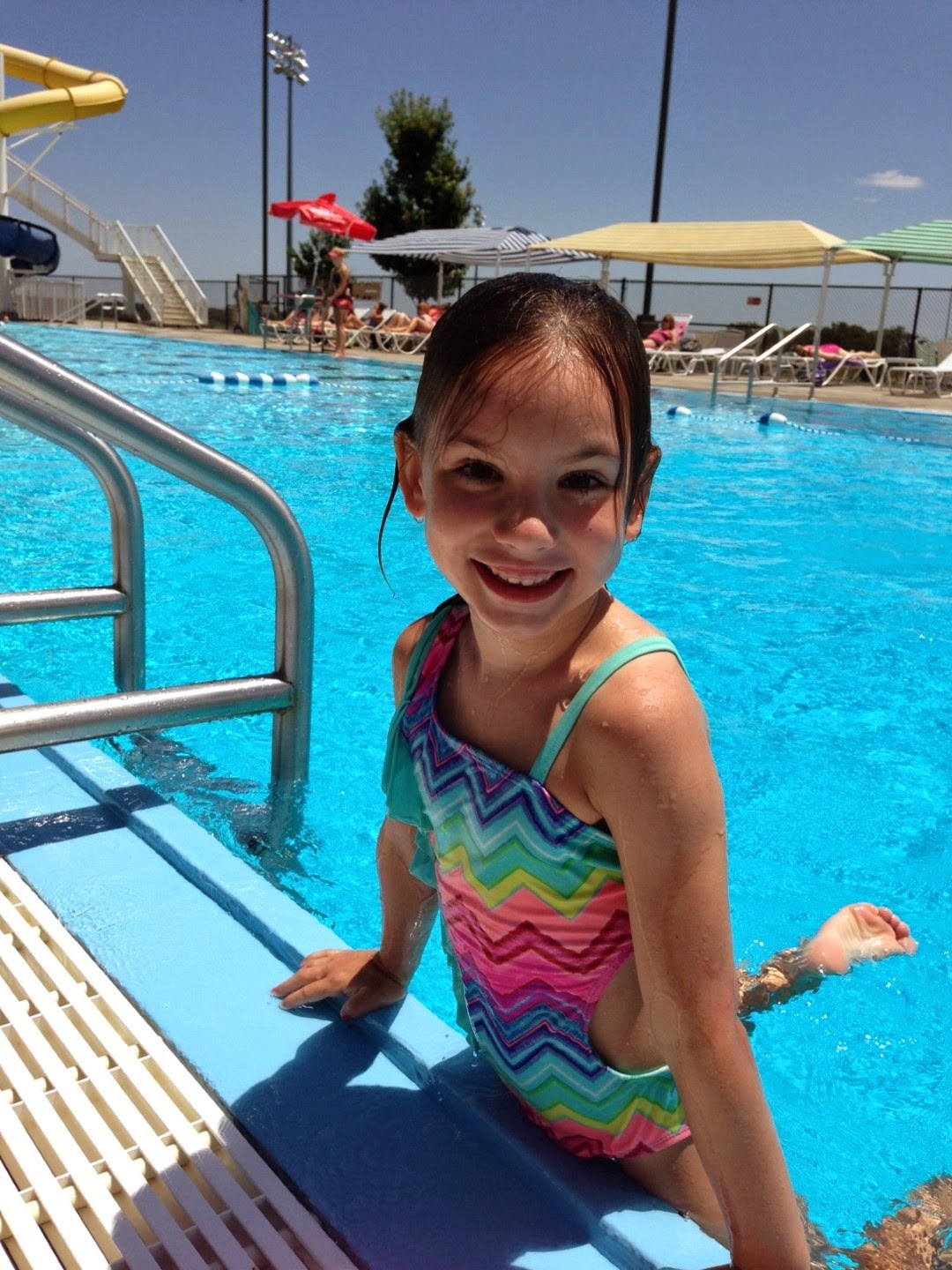 Kendra would probably rather sit around in the lounge chairs instead of braving the chilly water, but she is what I call an involved parent who takes an active role in being interested in what Layla likes.  sometimes it requires getting wet. 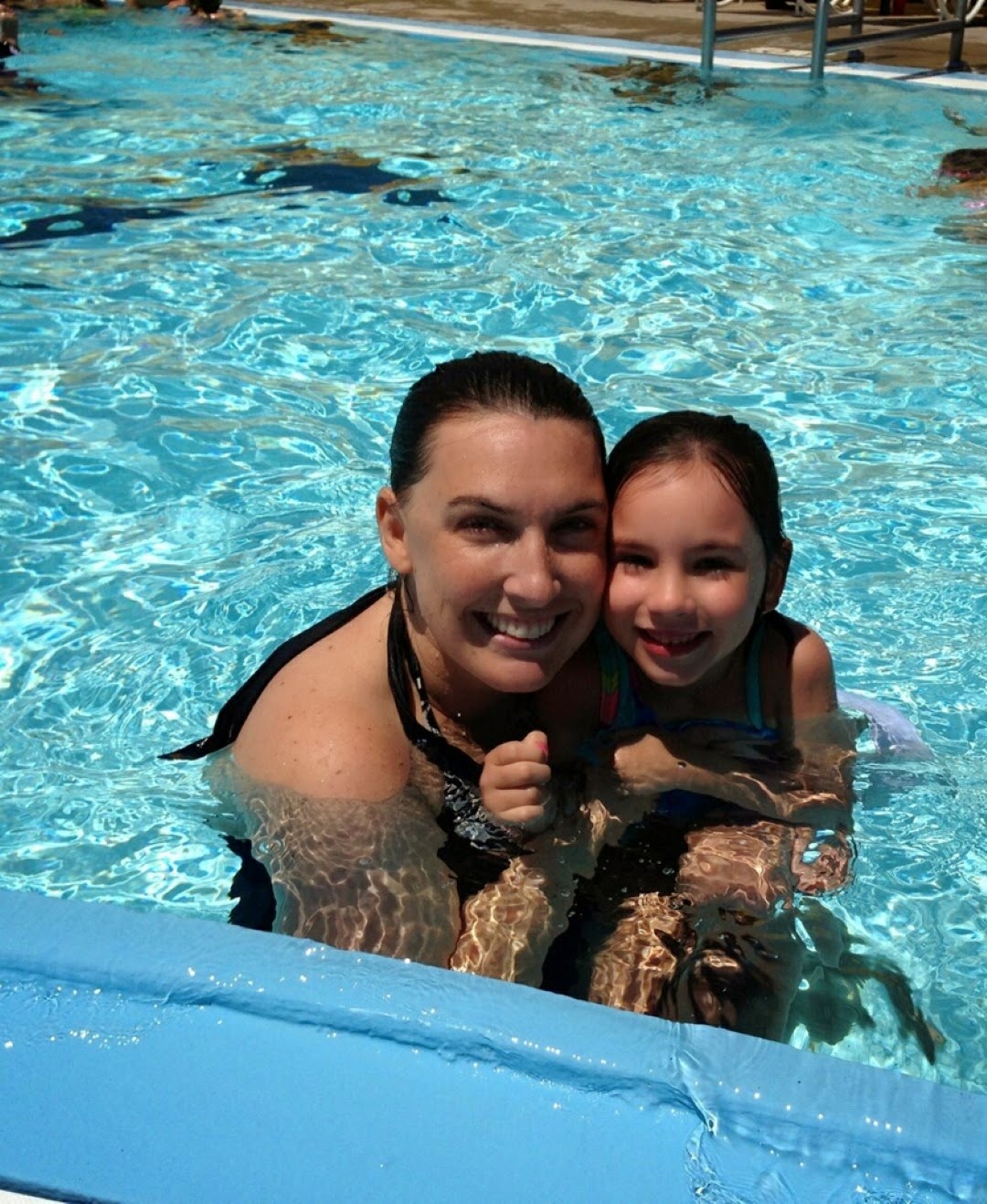 Easton tries so hard to be one of the boys.  Sometimes he's just too young to keep up with the older cousins, but sometimes they let him fit in and shine like a star. 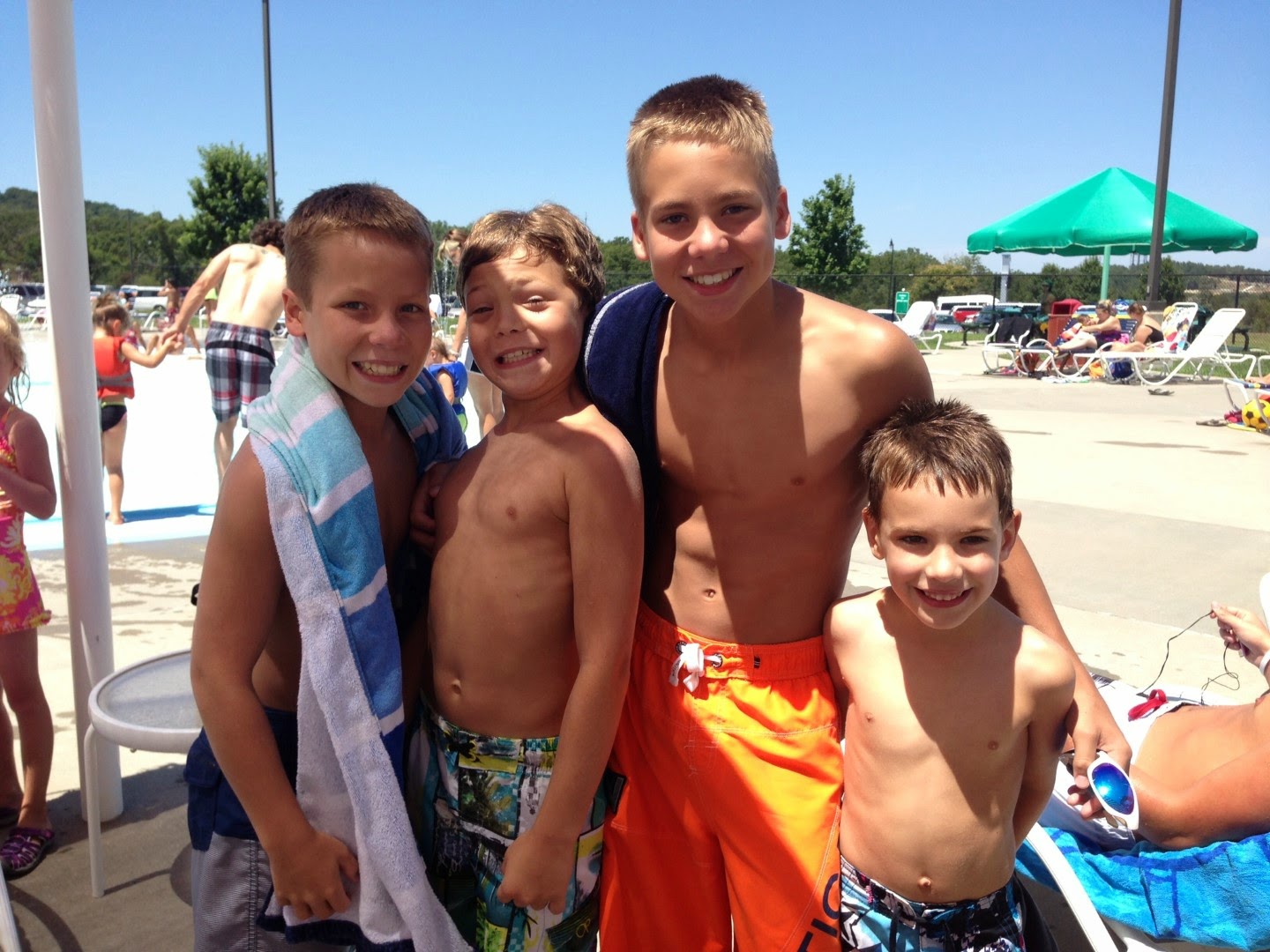 Layla is between Daphne and Trinity in age so she fits in well with their mentality and coolness.  Occasionally they allow Easton to fit in too. 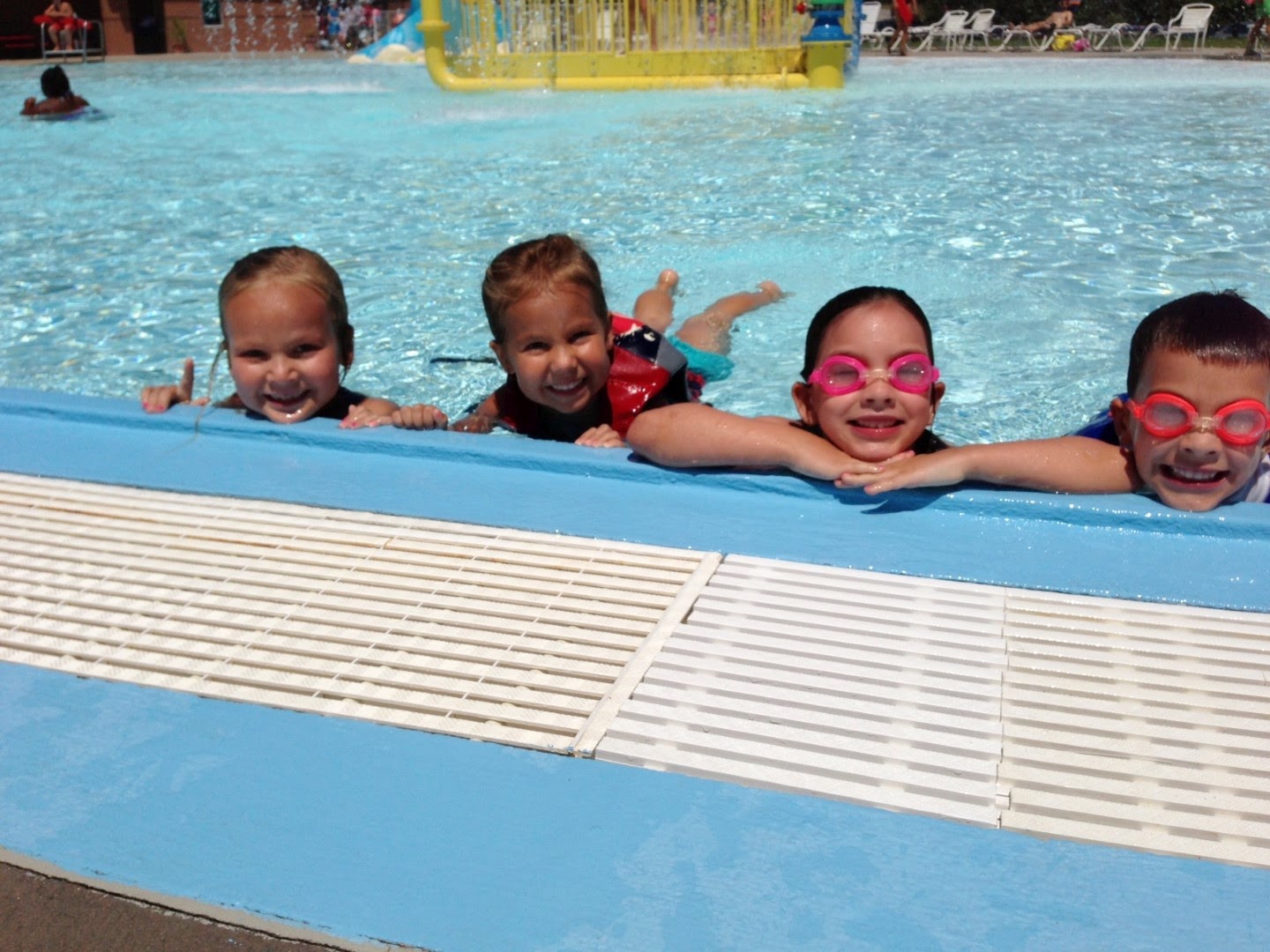 But not for the princess play times.  This picture is from one of the visits to Aunt Joanie's house.  They always return with amazing stories and toys as if they had been at camp for a week. 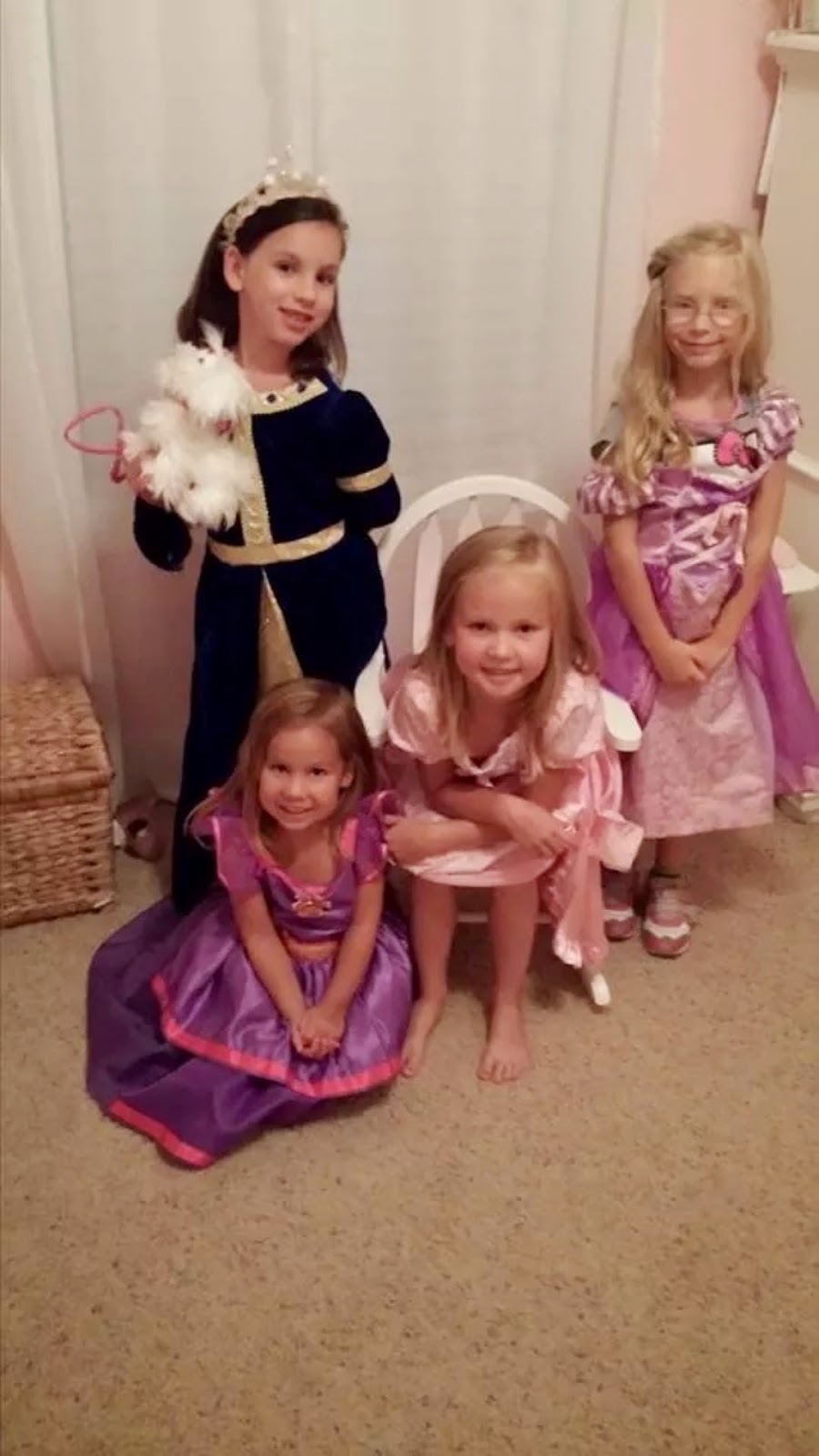 Easton learned to drive this week.  Papa taught him well and sent him on his way up and down the street.  He smiled and laughed all the way back and forth as the engine howled.  He is very cautious and calculating, but willing to try something new like this and practice over and over again.  That's a winning combination and I'm excited to see how Easton applies himself to opportunities as he gets older.  Cousins Silas and Eli have driven this gocart around Papa's house for years and now Easton is finally old enough and brave enough to give it a go.  I cheered him on and praised him for the bravery. 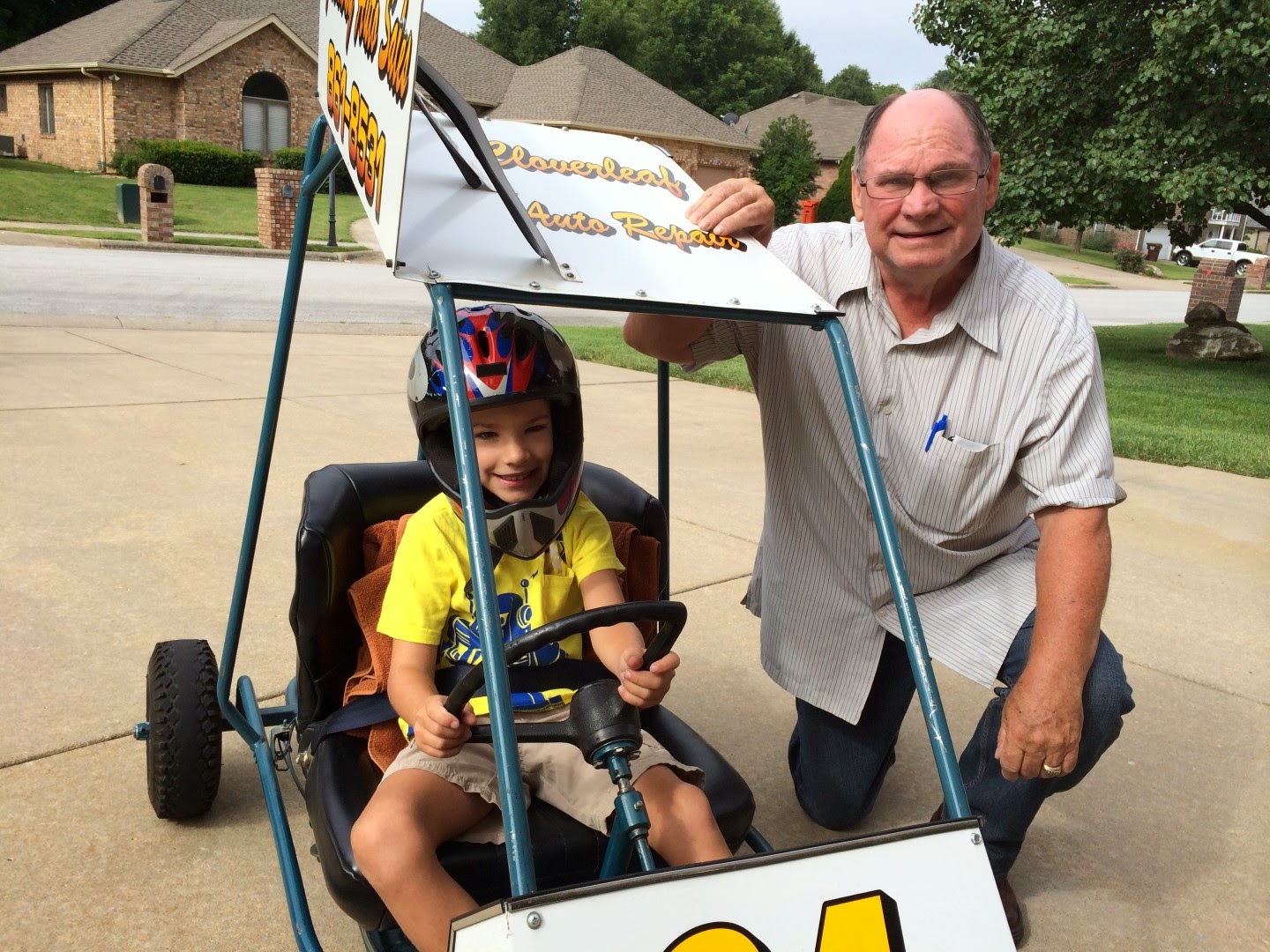 I'm still about 4 days behind in adventures, but will catch up as time permits.  I'm so busy with the 4 Webbs making memories that's I haven't been taking time to post them.