It's been an adventurous week in Oklahoma.  Our time here was focused on Mary and her wedding.  We were honored to help prepare for it and participate in it.  The wedding was the most unusual wedding I've ever attended, but I would have been disappointed if it was a normal ceremony.  The theme colors were red, white, and blue, which was appropriate considering it took place on the 4th of July.  Here is Kendra and Mary in the morning as we all got ready. 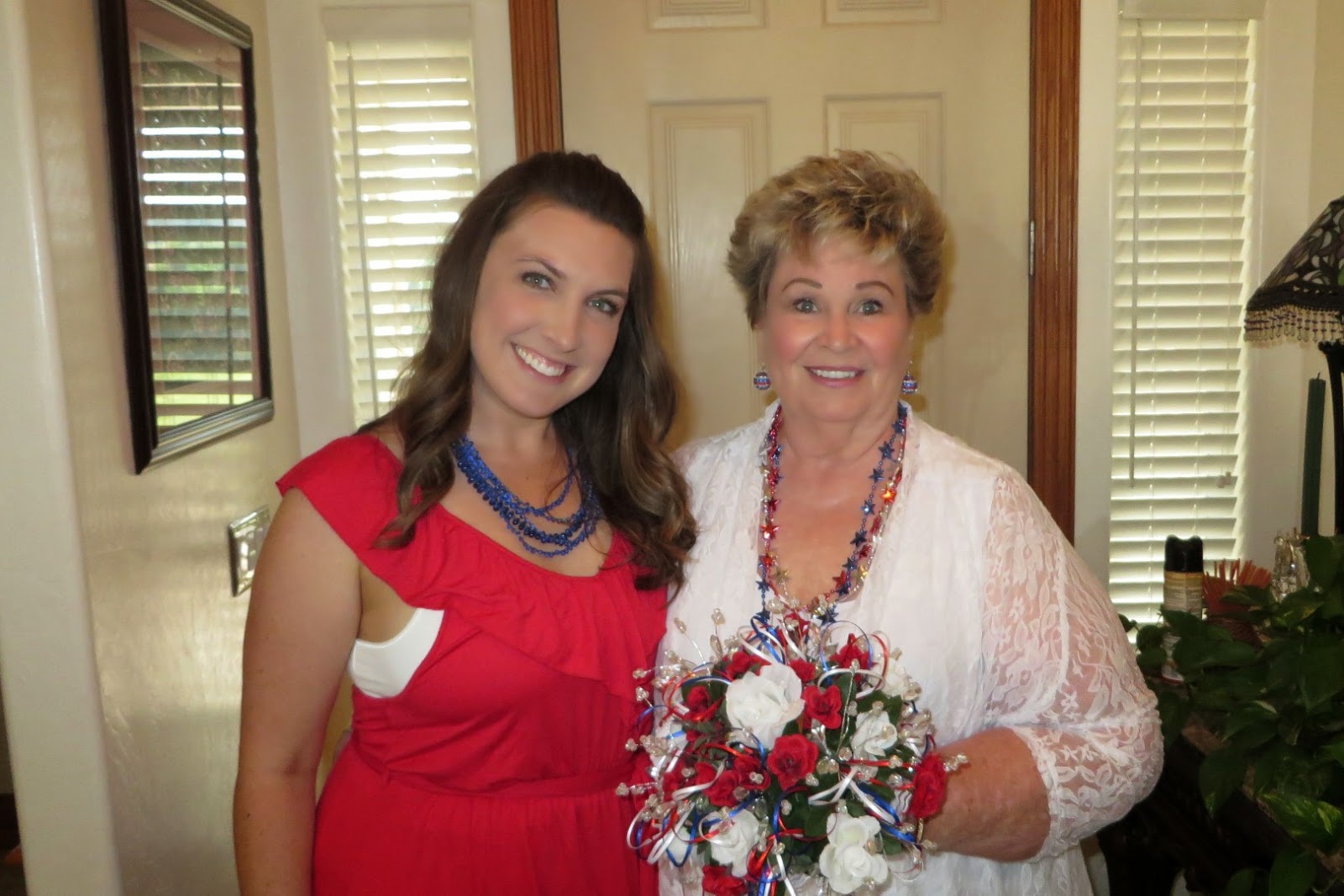 I walked Kendra down the isle when the ceremony began as a part of the family being seated. Kendra lit Mary's unity candle.  Then, I had the honor of giving Mary away.  When Donna, the pastor, said, "who gives this woman's hand in marriage" I said, "her grandchildren; Jonathan, Lauren, Abbie, and Megan and I, her nephew gladly give her to Joel." 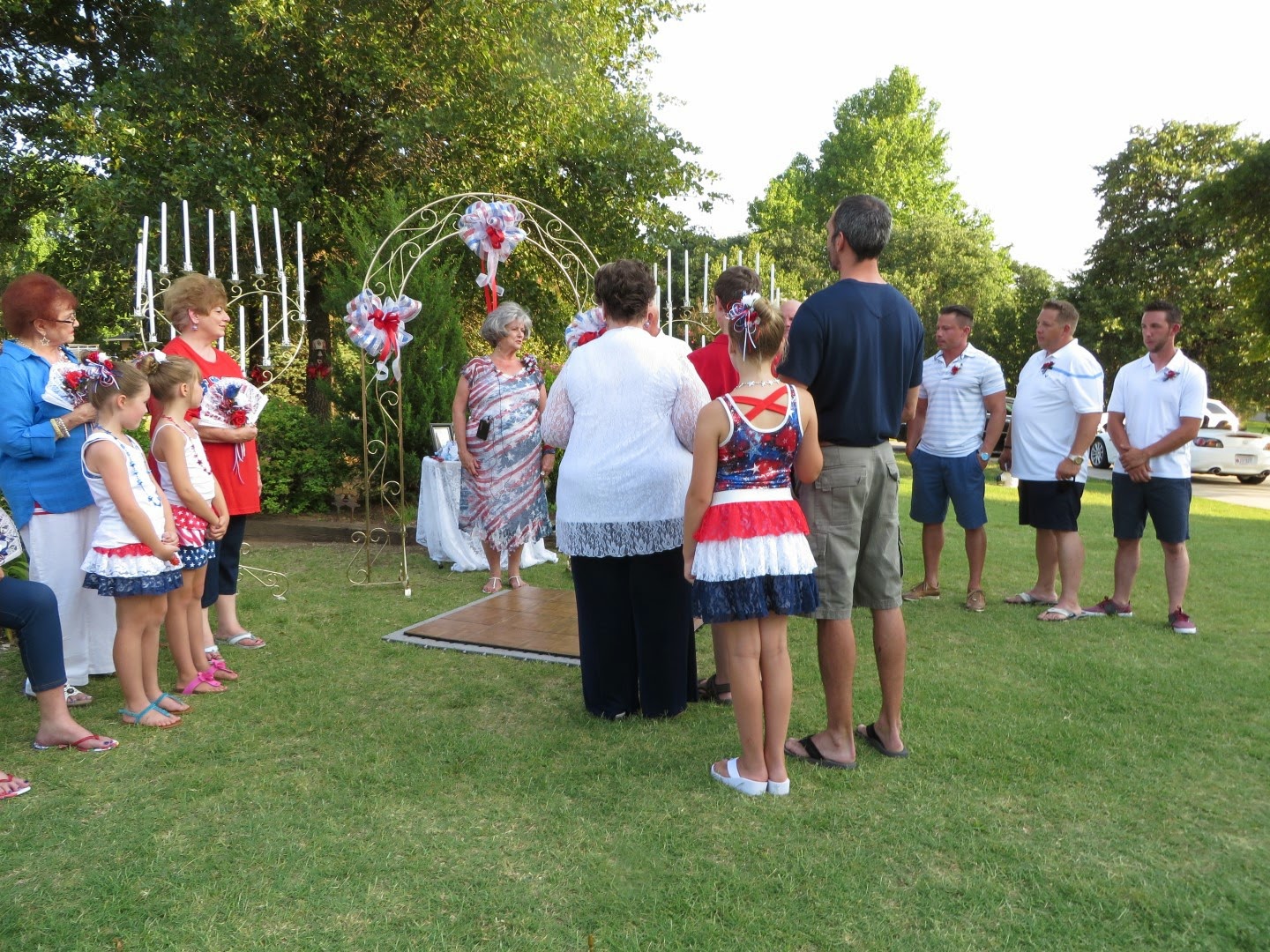 The wedding was ultra casual.  I would feel a little odd being in flip flops and shorts and a t-shirt as an attendee of a wedding, but being in this attire while being in the wedding was a new level of casual.  Everyone was dressed this way so it made the occasion completely comfortable.  Besides, it was a hot July afternoon so all the formal dress would have made us all extremely sweaty.

Joel and Mary said their vows, prayed, and lit the unity candle.  Everything went according to plan from what I could tell.  Most importantly, Mary was happy with the event and the outcome. 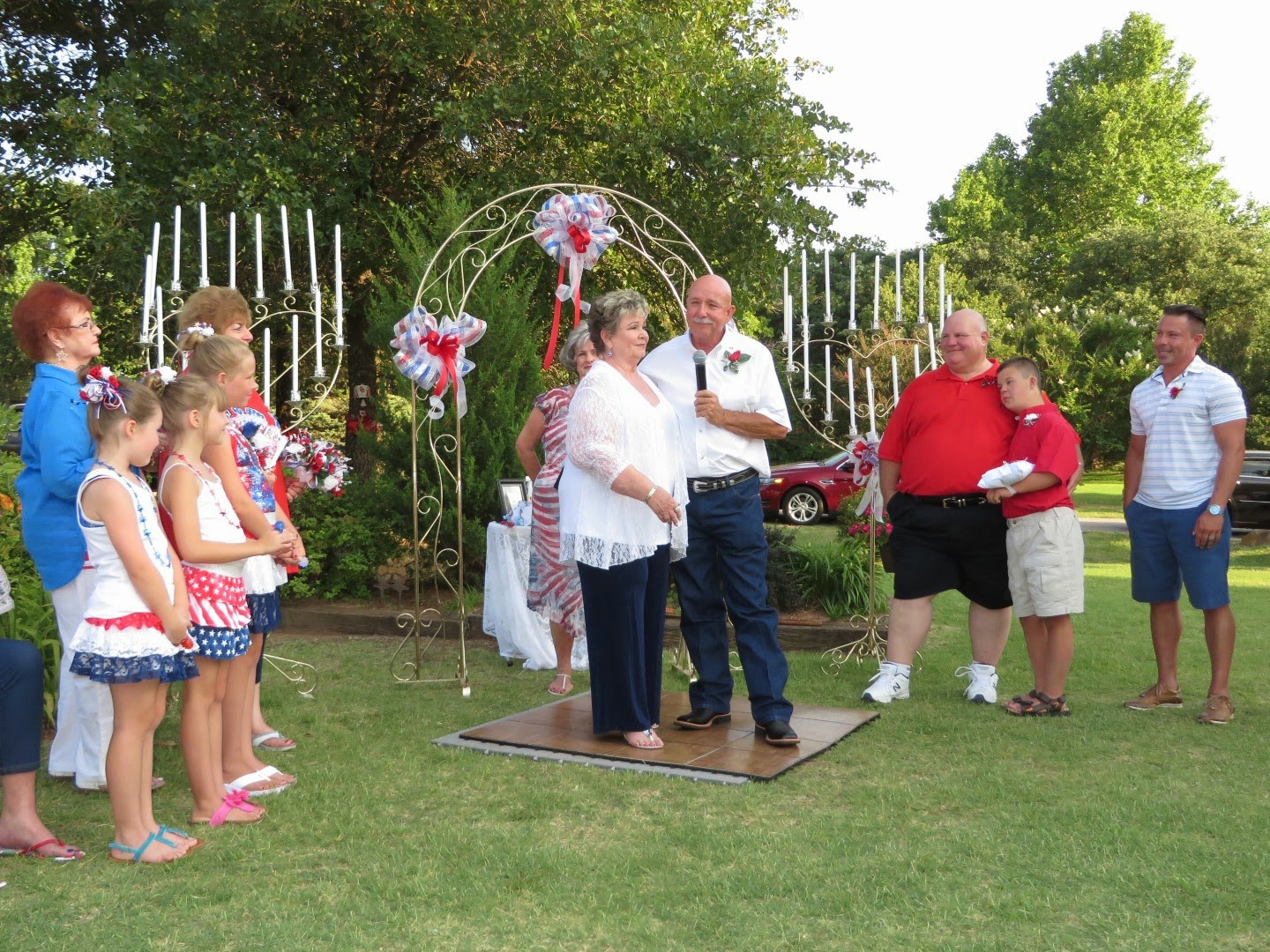 During the reception, the DJ gave an open mic invitation.  He offered the chance to share a humorous story, but Kendra and I had planned to use this opportunity to speak some kind words.  Kendra wrote a poem and framed it.  She read the poem and people laughed and cheered accordingly. 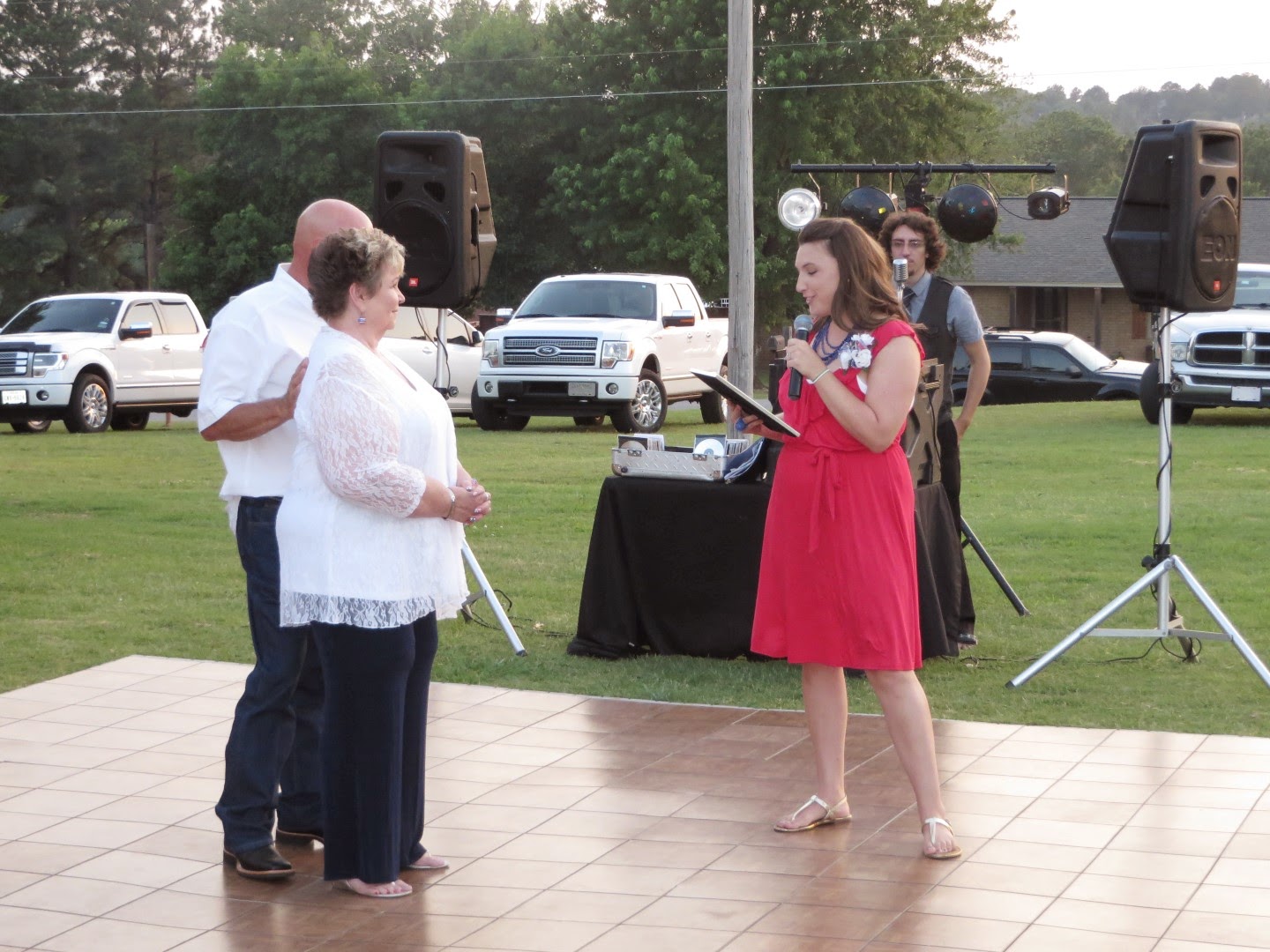 They had a huge bounce house and water slide for kids as well as the biggest non-commercial fireworks display I've ever seen.  I managed to capture this moment with the fireworks exploding in the background.  This was my favorite picture of the day and most correctly represents the event. 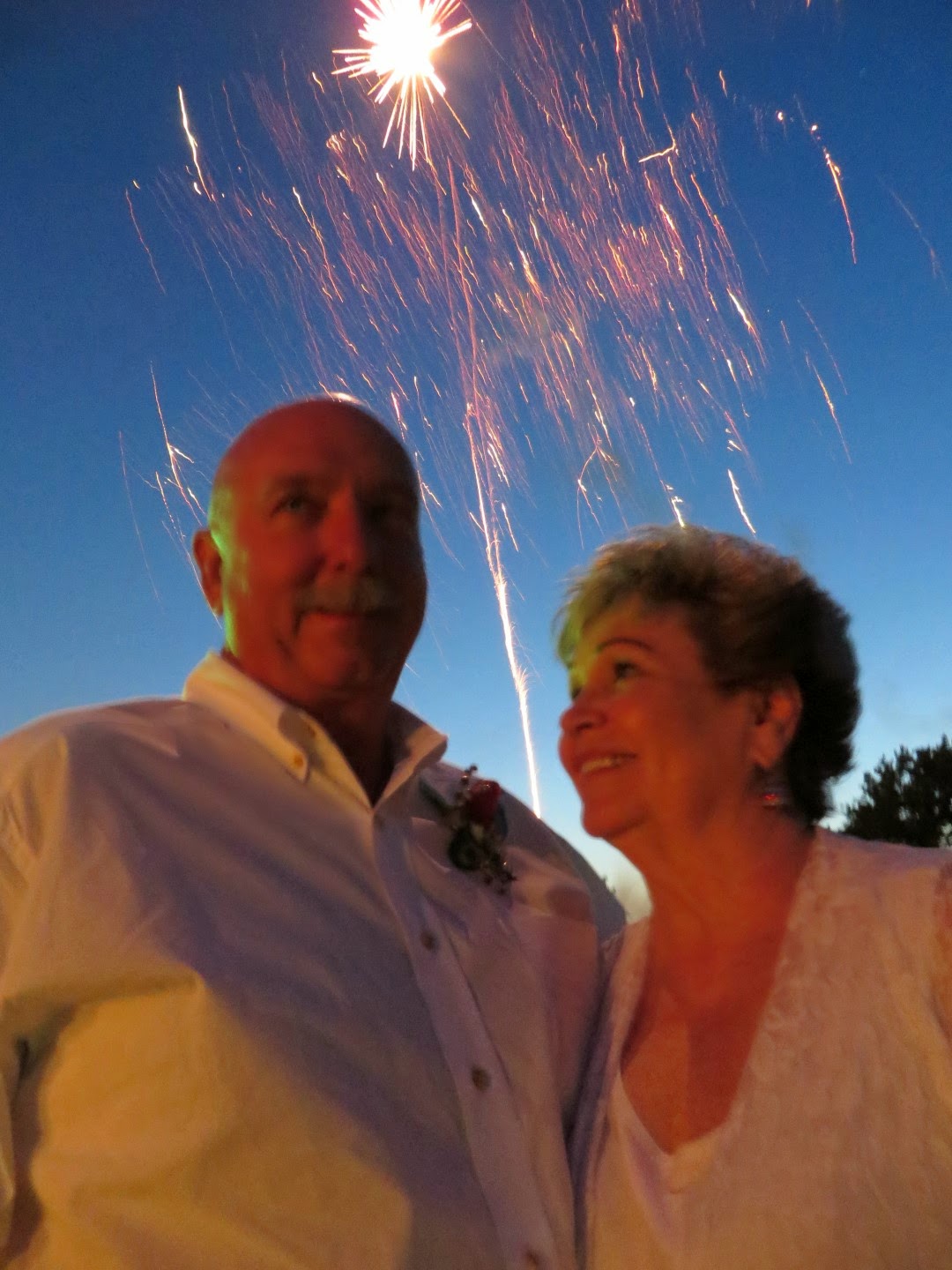 One of the bonuses of the wedding was meeting people from my Dad's past.  This is Ed Horne.  i think that was his name. He and his wife have been married 63 years.  They knew my grandpa Webb and my Dad.  Was interesting to hear their stories.  There aren't too many people still alive who knew my grandpa so I made the most of the opportunity by talking with them as much as possible. 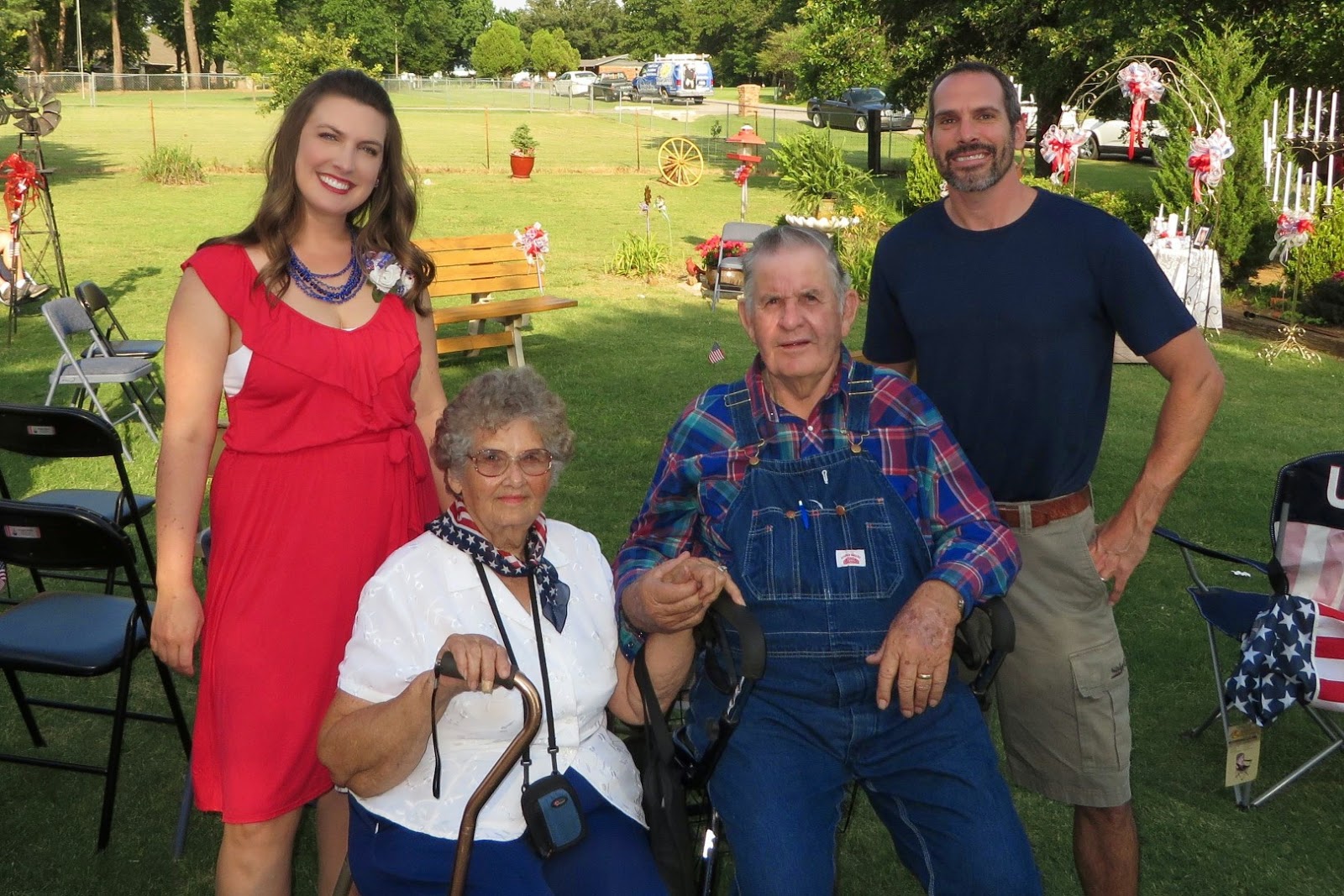 This is a picture of all children and grand children for Mary and Joel.  One of the most enjoyable parts of the week was meeting and hanging out with Joel's family.  They are super friendly and included us in all the events. 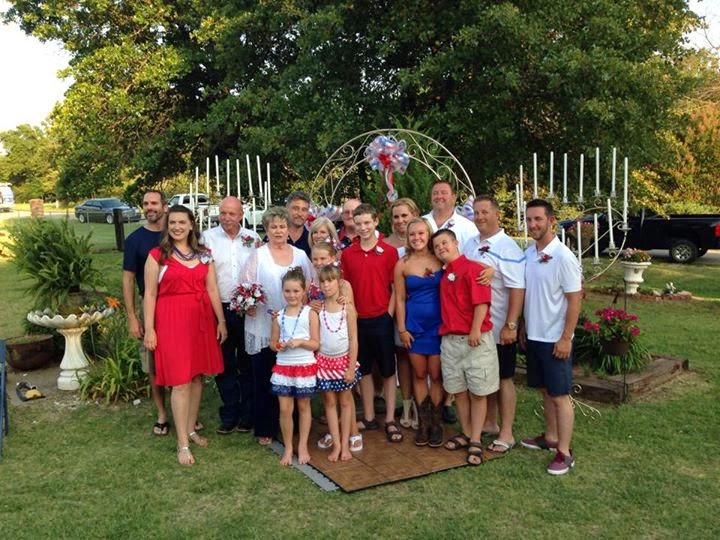 Here in a picture of Joel's kids, Mary, and us. 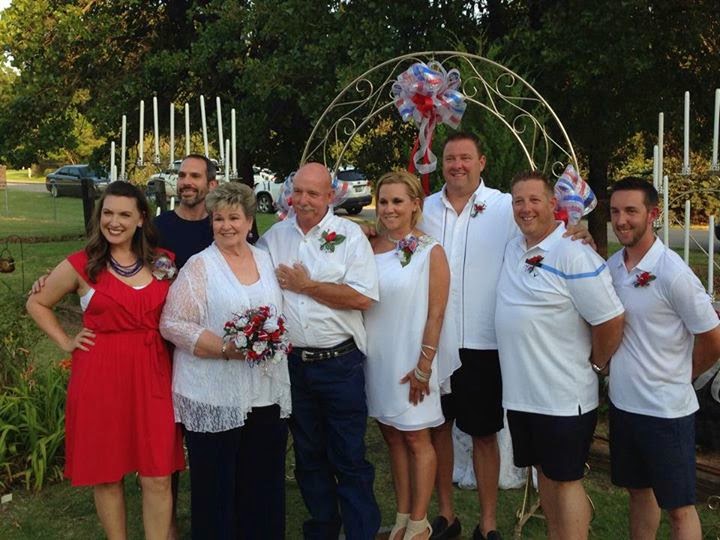 I got to hang out with Joel's kids late one evening after the wedding.  I figured that would be the best chance to get to know them away from the social scene.  It was refreshing to just hang out and converse.  There are many families who don't take time to do this on a regular basis, but from what I witnessed, they are involved in each other's lives at a deep level.  Kendra was one of the fanciest dressed (and certainly the best looking) ladies at the wedding.  She also had patriotic finger nail stickers to match the rest of the girls.  I've never seen shrinky-dinks for nails, but it worked fine and looked good.

There is no way any man could ever replace Uncle Dave, but luckily that is not what Mary or I were hoping for.  There is really no comparison between Joel and Dave because it's not fair to either one to even try to do that.  Joel is pretty amazing.  Mary told me how he gives her a hug and prays blessings over her.  That was the moment I shifted from unsure about Joel to being his #1 fan.  I watched Mary experience what it means to be "covered" by a husband who knows how to be the spiritual head of the household.  I'm looking forward to having him be a part of our lives. 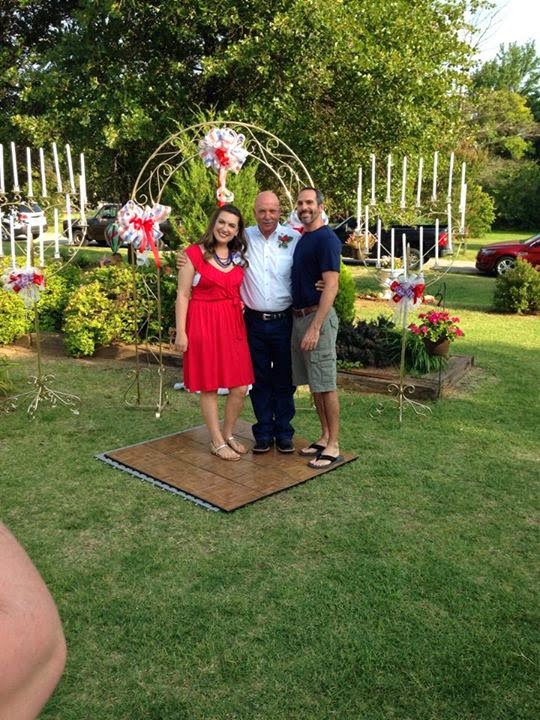