The summer that seems like it will never end is marching on like a parade rolling through town.  These past few days have been real vacation for me where I'm officially taking off days from work in a row.  Being disconnected leads me to a whole new tranquil place of "i don't care about anything" land.  I'm just having fun going along with whatever everyone wants to do.  There aren't many scheduled events, but that is exactly what the doctor ordered.  Today Dad and I had our haircut appoints.  That is the only thing I had scheduled for the whole day.  I consider the absence of a minute-by-minute plan to be one measure of success this week.

The twins are playing outside as much and as often as possible.  we are both happy for them to go in the back yard and not worry about their safety.   They only come in to inform us about a bug they found or an accomplishment.  For example, Easton learned how to swing all by himself.  He had no interest in it before, but for whatever reason he had a desire to learn. 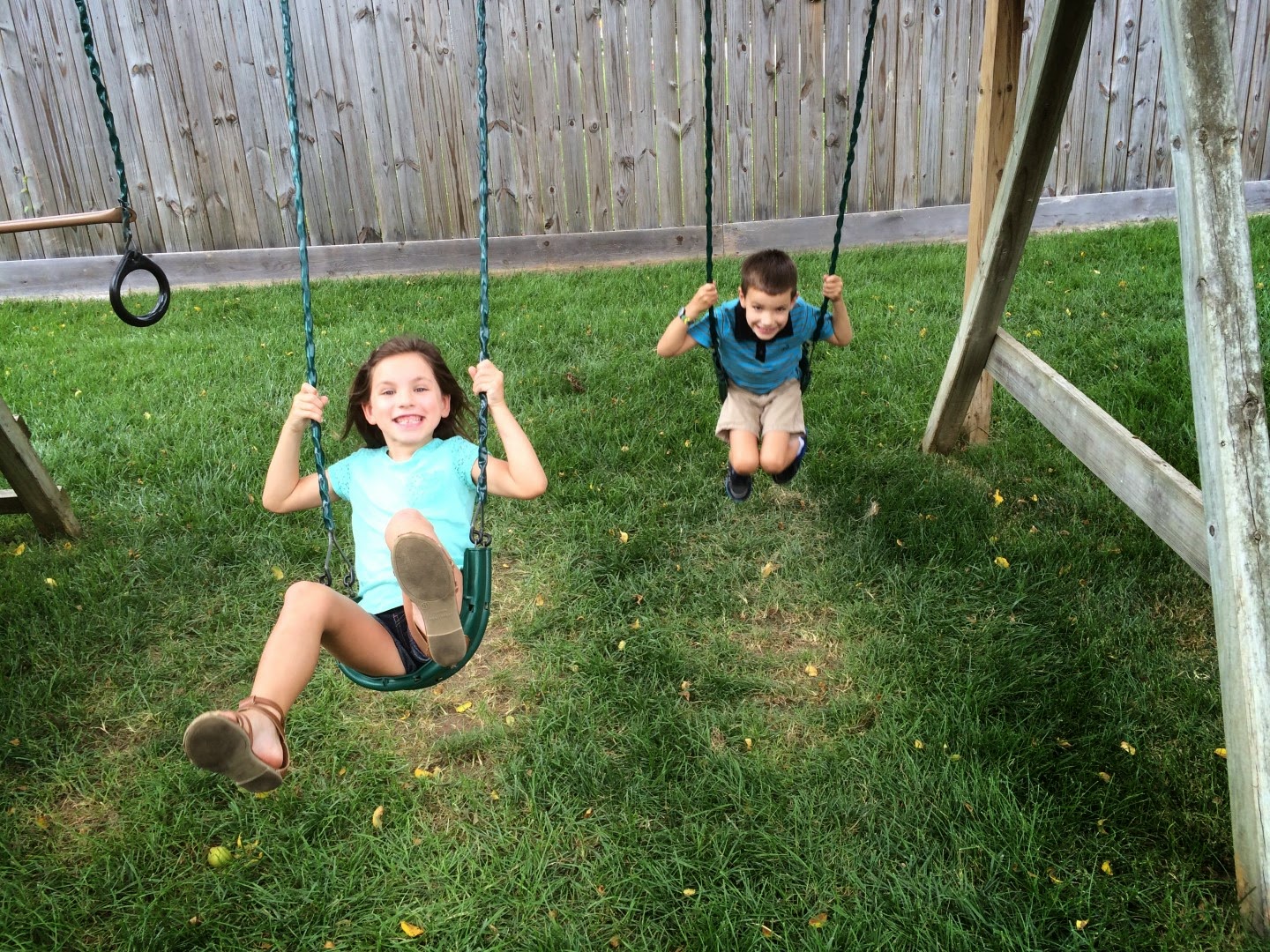 Then, as these twins often do, they find a way to make something a team effort.  They swing back and forth towards each other saying "tick" "tock" as they moved in time together.

This was my first chance to meet five-month-old Beckham.  He is my brother's first born son and the only other Webb boy to carry on our family name besides Easton.  Beckham is calm and happy.  Brings back a few memories of the twins when I was working through this stage with them. 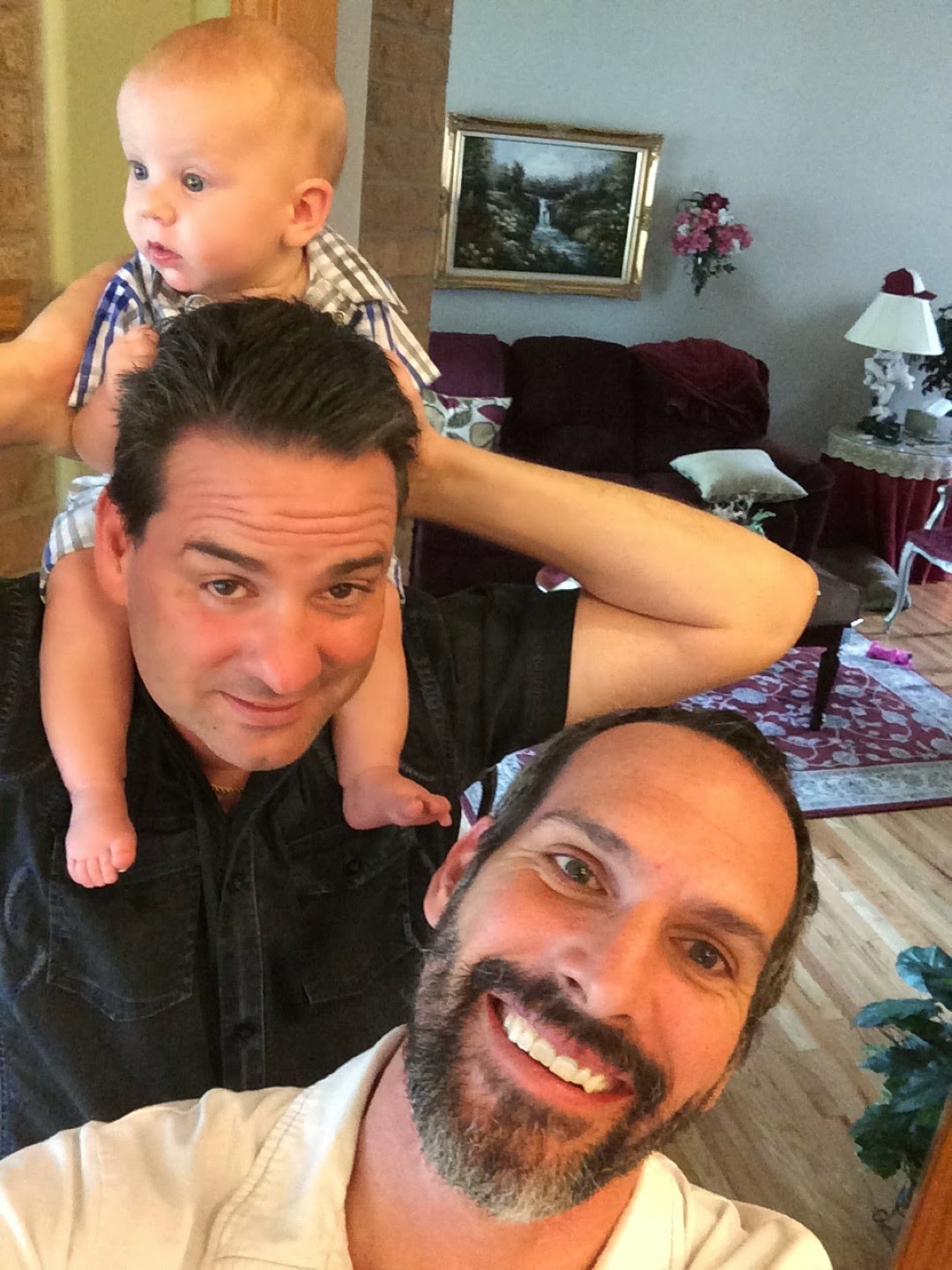 Nana and Papa have a trundle bed with camouflage bedding.  As long as Easton has his Nunu it doesn't matter what he sleeps on or in even a cool set of sheets like these.  The sleepover at Aunt Joanie's house last night led to a long nap by Easton.  Imagine that...  nap time for once. 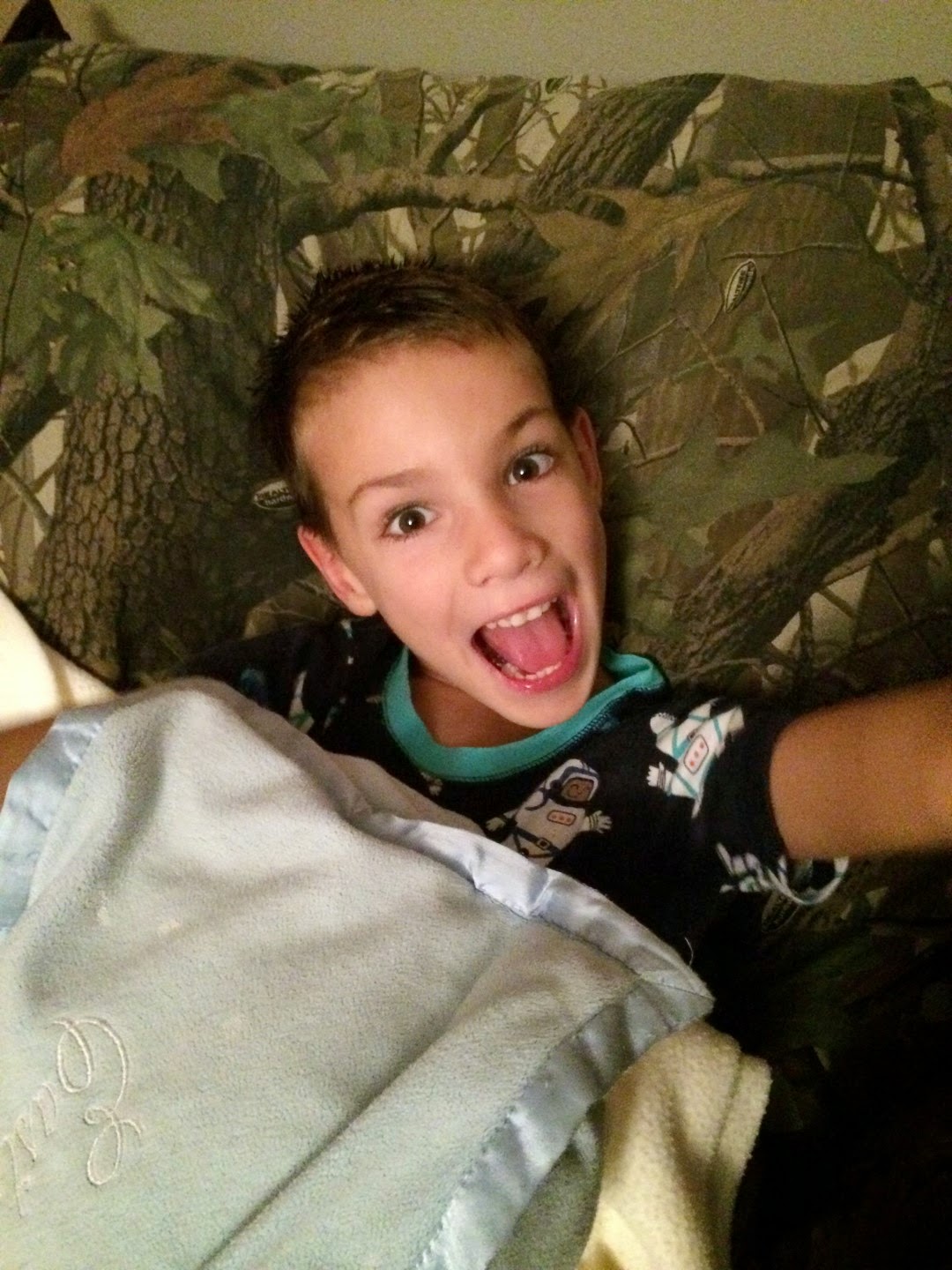 Layla did not take a nap.  I know... big surprise.  I walked in to find her listening to her iPod.  That was a first for me.  I know she has her own taste in music and it's great to see her choosing what to listen to and sing along with. 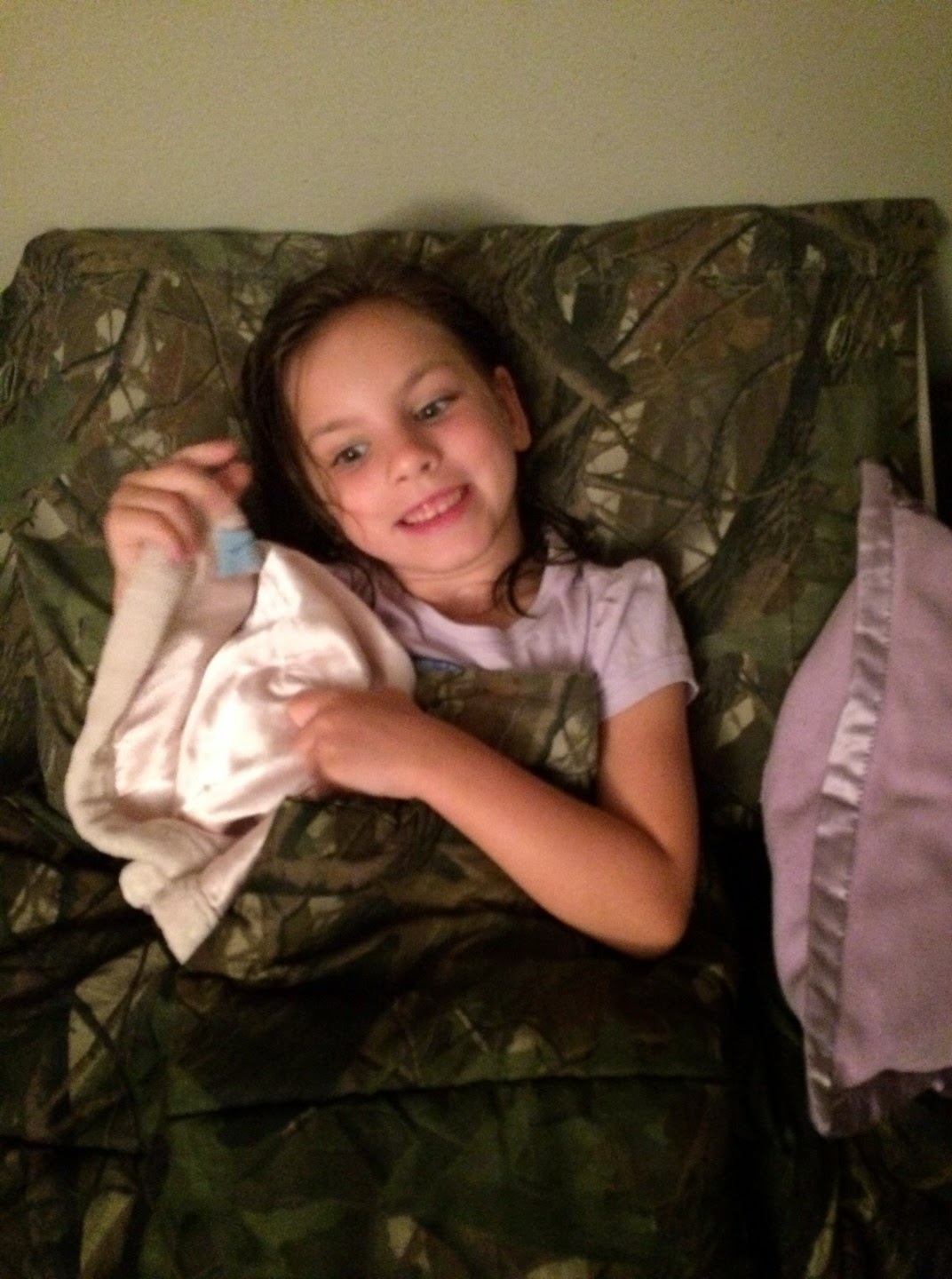 The 4 Webbs joined my brother's family and sister's family at the aquatic center for some sun and water fun.  Easton and Layla are Phoenix wimps!  The water was chillier than our 94 degree pool, but there is no way the temperature warranted shrieks and a timid attitude. 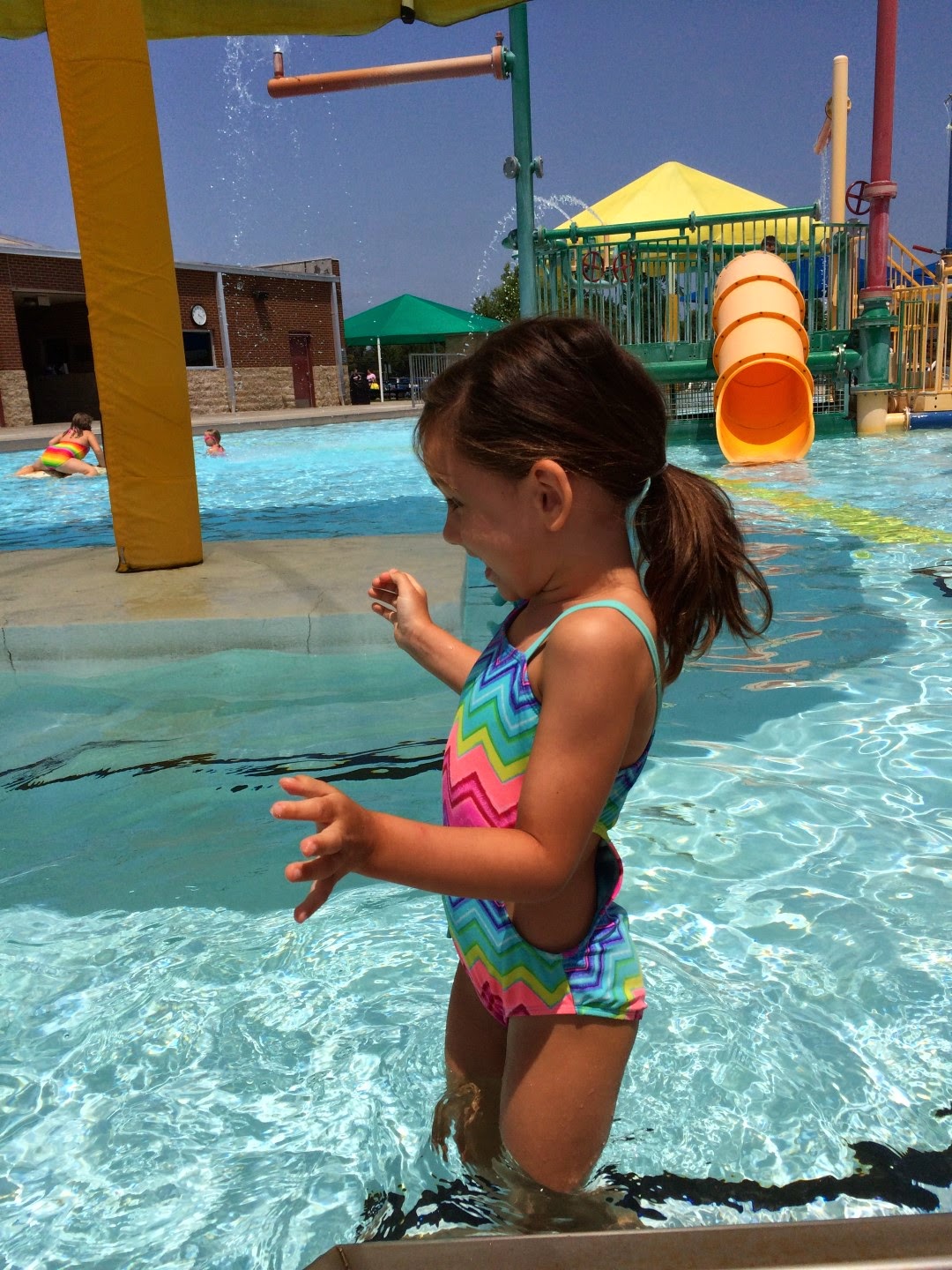 Easton was the first to jump in and said, "let's go Dad!"  I gladly joined him and we had bunches of fun swimming between the people together.  I don't know how many more years I have left of being cool enough for him to want to swim with me in public.  Gotta make the most of it while it lasts. 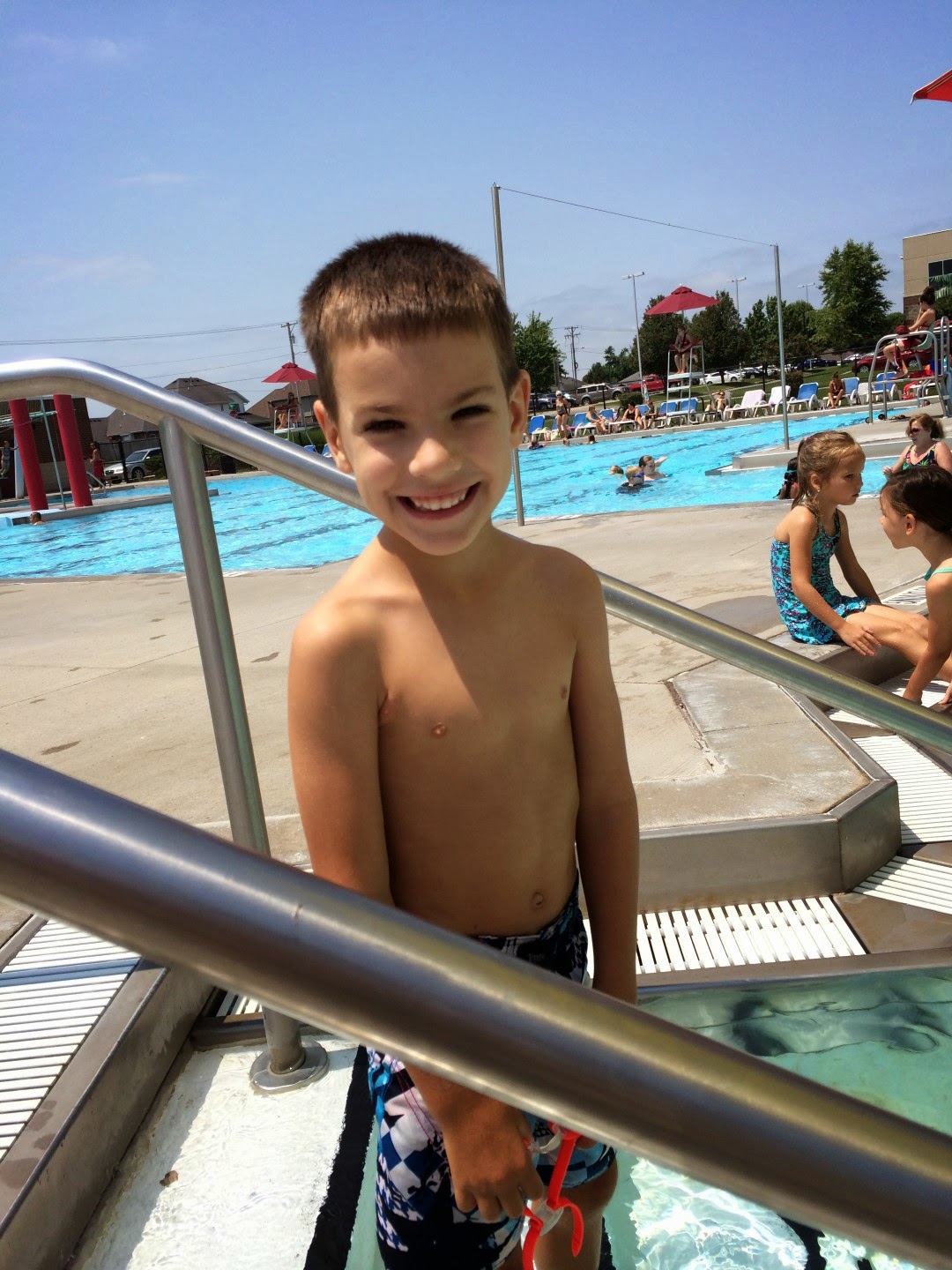 And then there's this girl who will always be young because of her fun personality. 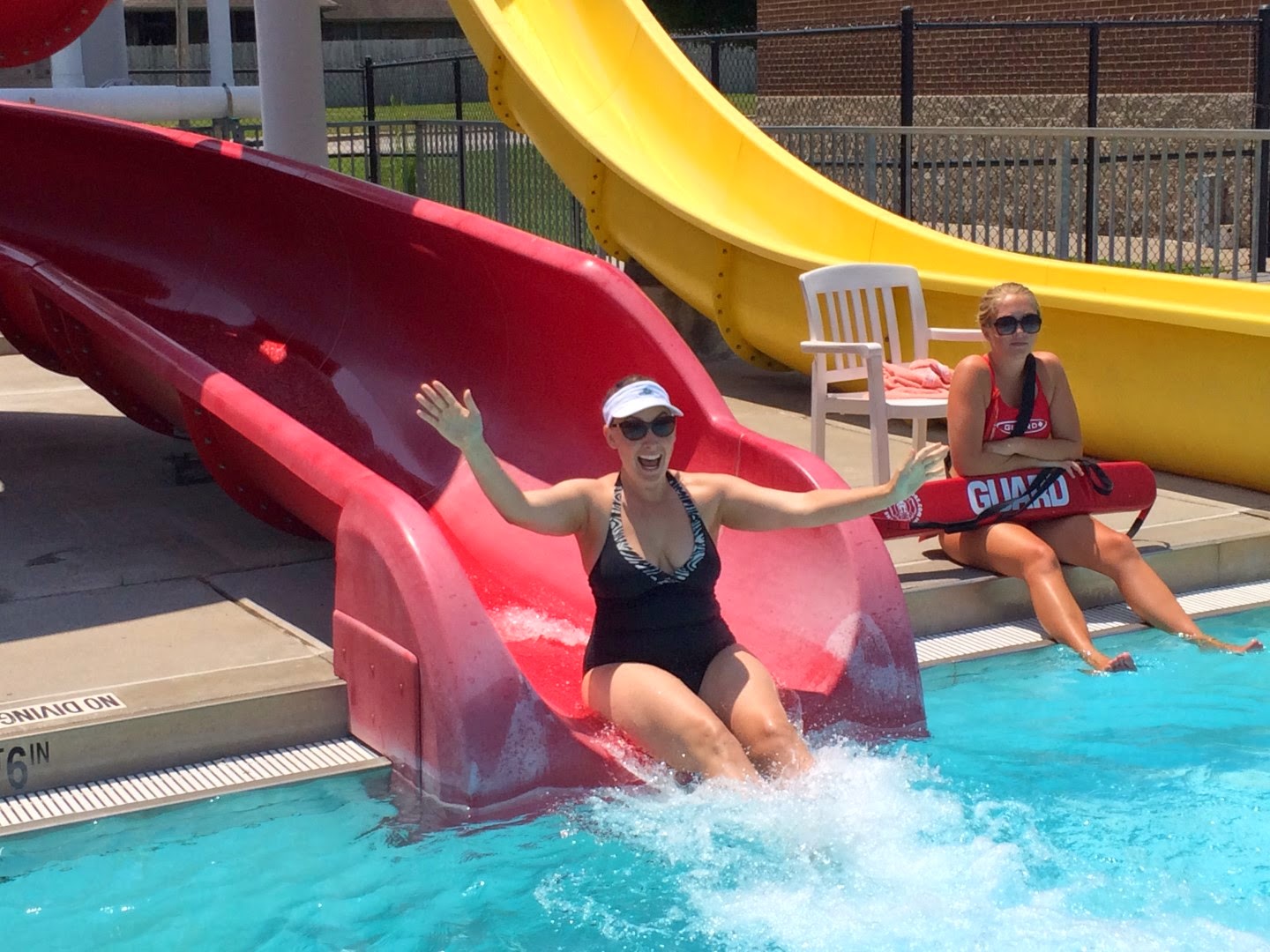 Layla's favorite part of the aquatic center was this obstacle course where you have to balance on the floating, moving pads while hanging onto the rope netting above.  She conquered this at least 8 times during the few hours we were here. 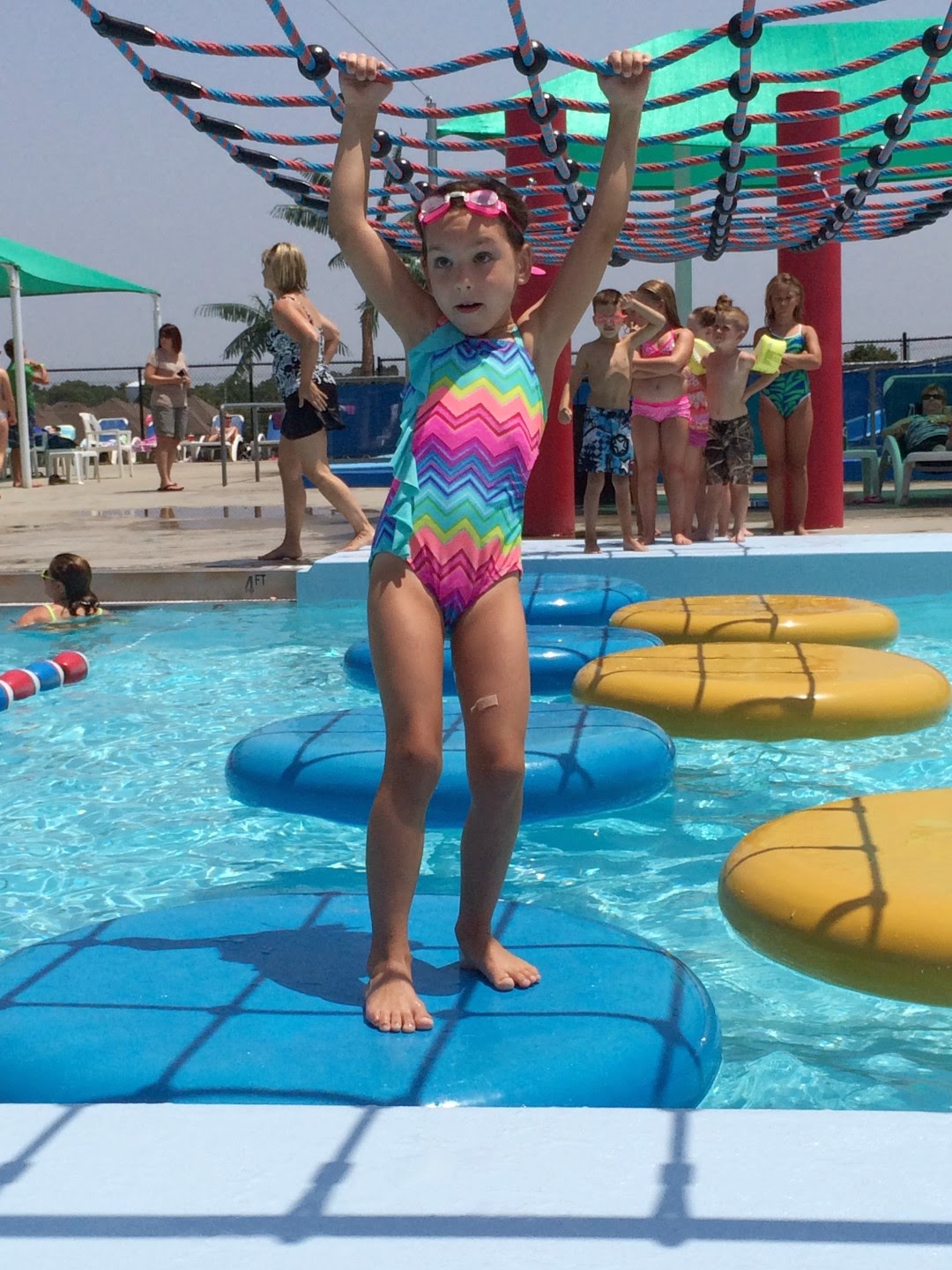 Easton did it a couple of times, but wasn't as excited about doing it over and over again. 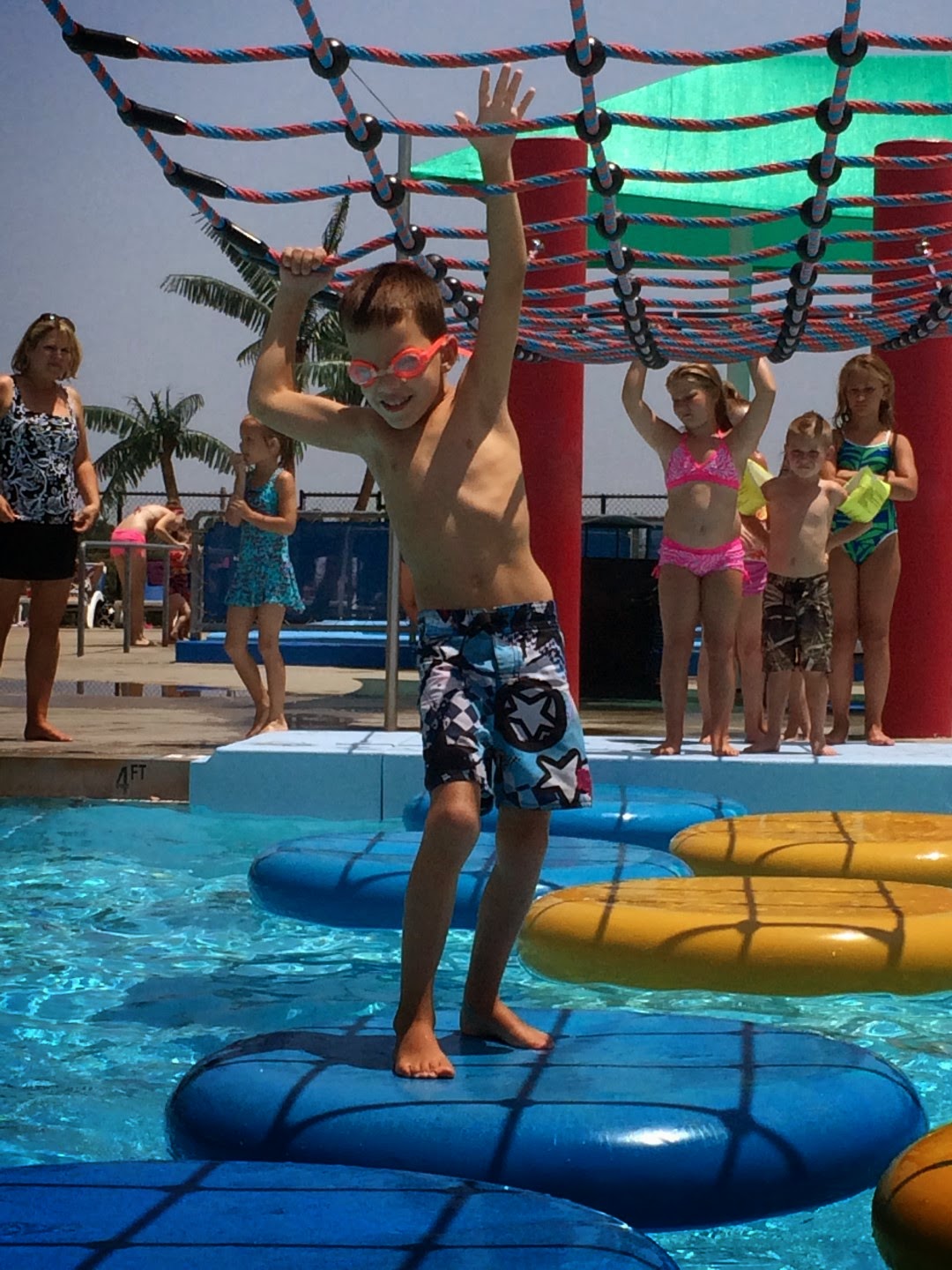 The aquatic center has this simulated wave area called the "Huna" where you can ride on a boogie board for 45 seconds at a time.  We watched cousins ride it and I asked Easton if he wanted to do it.  He said yes so we paid the $2 for his pass to do it.  The first time he lasted about 2 seconds and wiped out up top as the water jetted him up and over the edge above.  I asked a little later if he wanted to try again and he agreed.  I was surprised, but proud of him for tackling it again.  He rode it well and stayed on longer than I expected.

He has an adventurous spirit to try new things and a tenacity to go back after defeat and give it another try.  These are very welcomed traits starting to flow out of him little by little.  I wonder where he gets that from?  Oh yeah...  Kendra. 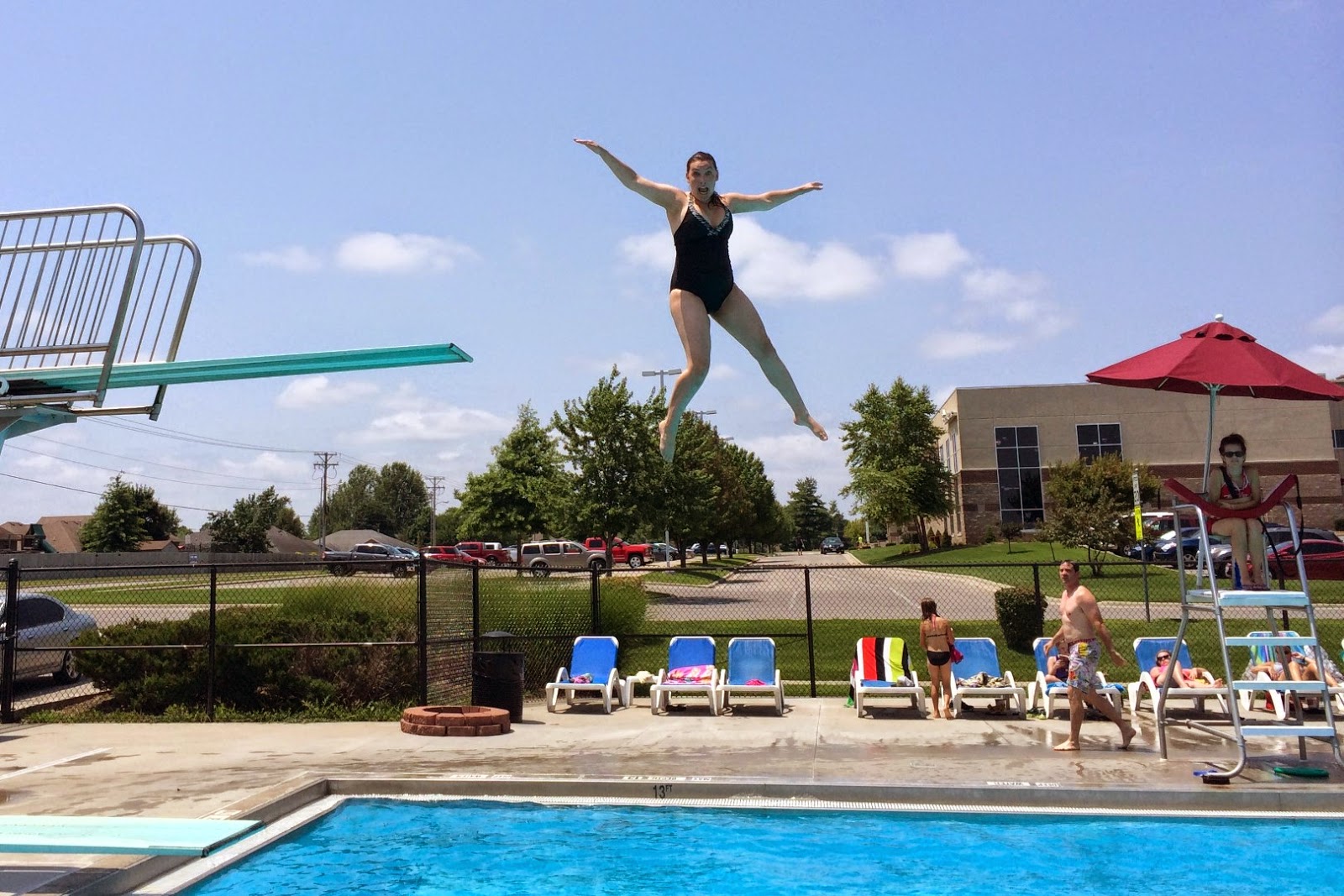 She jumped off the high dive as we proudly cheered below.  I would have joined her if my back were fully recovered.  I'm happy Kendra will never get too old for fun and adventure.  I enjoy the ride with us as the 4 Webbs and look forward to closing out the summer with a bang.