The last few days in Springfield were no less memorable than the previous week's worth of adventures.  I only had a few desires of what I hoped for in Springfield.

1. be with family collectively and individually
2. Eat Andy's frozen custard
3. tour a cave

Nana and Papa turned that hope into reality with a trip to Fantastic caverns.  As we waited for our tour to start Easton found the wall of fossils in the gift shop.  The big one behind us is an Ichthyosaurus. 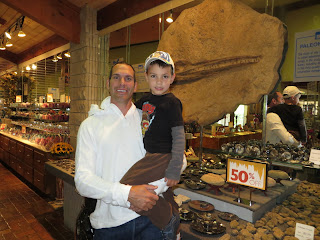 We loaded up in the tram and headed down 150 feet into the cavern.  The tour guide paused at the photo shoot spot.  Here's us ready to see the natural wonders. 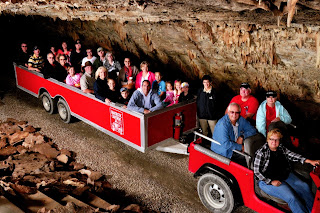 Layla is still overly cautious about every hint of risk because of the painful Tower of Terror incident at Disneyland.  She sat right across from me so I could reassure her.  We held hands as we descended into the darkness, but after about 10 minutes she was too excited about the things we were seeing to be fearful. 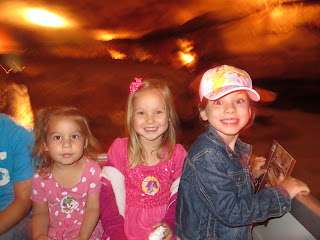 One of the reasons I wanted to do this is because some of my favorite memories are from when we went through Carlsbad Caverns during one of our vacations.  I think the twins will remember this forever.  Pictures don't do it justice, but this is one of the grand features we passed.  The formations take hundreds of thousands of years to form. 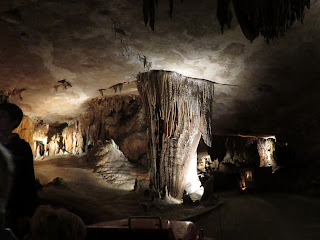 Even though Easton and Layla have no point of reference for what "hundreds of thousands of years" means, I know they were amazed by the cave experience. 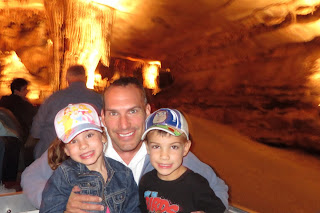 Joanie's family joined us even though she and the boys had already seen the cave in the past. Trinity and Daphne were first timers along with the twins. 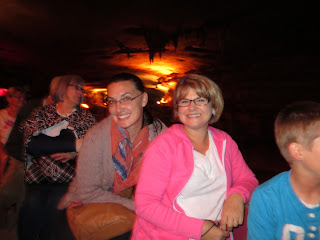 Our tour guide is in the next picture (off to the left), which gives a good perspective and measure regarding the size of these formations. 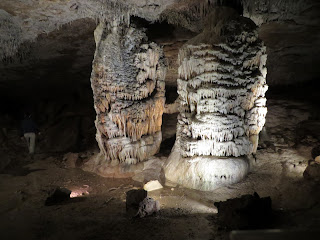 Easton was a happy boy who really "gets" the awe and wonder of scientific marvels even though he doesn't realize the amount of time it took to create them. 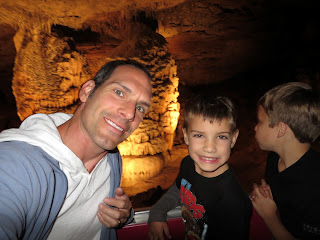 Layla kept asking if the tour guide was going to turn on the lights for the next section.  Her flashlight on a light-sensitive panel activates and deactivates the sections of the cave.  Each time we would approach the end of a lit section Layla would ask to make sure she illuminated the next section.  She's a born leader who likes to make sure everyone is doing their job. 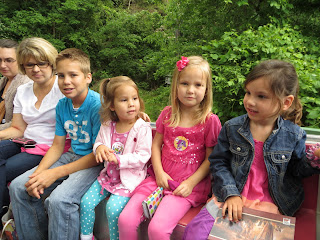 On our way out of the gift shop Easton realized the fossils could be purchased.  His eyes lit up like fireballs and he asked kindly to pick one out.  He chose a trilobite, which is about the size of an egg.  Since then he's been asking all kinds of questions about the creature frozen in time.  We even had to ask him to remove it from the table during dinner.  that is not a welcomed guest no matter how old the fossil is.

The jeep behind us in this next picture is one of the early models of the tour jeeps they have on display inside the gift shop.  I figured it would be a good background for my 4 Webbs highlight reel. 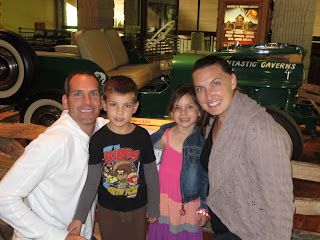 and here is Nana and Papa with all of the grandkids except Lexi. 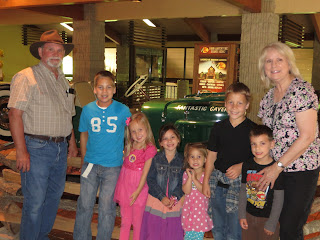 We celebrated survival of our journey underground by eating at McAlisters.  The sticker on the back of Trinity's seat is highly accurate. 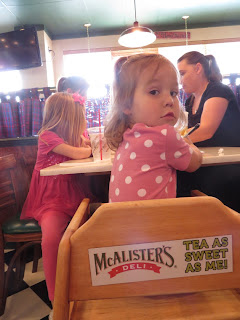 The afternoon temperatures were comfortable and warm enough to take a dip in the pool.  Daphne and Layla had matching princess swimsuits with tutus.  They were fluttering around and playing so much I couldn't get them to stand still on dry land long enough to take a picture.  had to settle for this one of them in the water as they swam like fish. 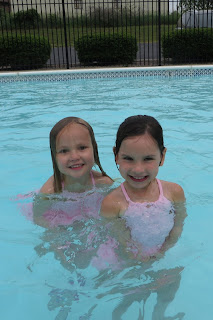 Silas connected the foam noodle up to the water jet and turned it into a fire hose.  Sounds like something Easton would do, for sure. 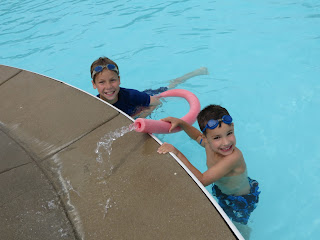 Joanie's house is always entertaining for adults and children alike.  Silas found a turtle alongside a road somewhere.  Easton and Layla were fascinated with the live creature.  Especially as they fed it cherry tomatoes.  I didn't know turtles like them, but apparently they do!  So much to learn. 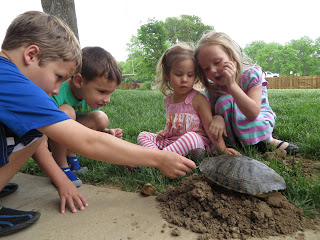 Star Wars is enjoyable across all ages.  Eli and Easton had walkie talkies and Star Wars guns.  That's enough to keep any two boys happy for a few hours. 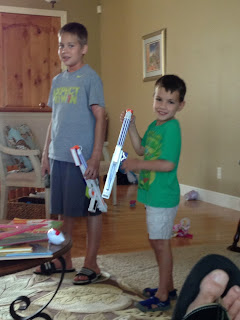 Joanie's boys were such a great influence on Easton.  The playtime with them was priceless.  Easton is already expressing sentiments of missing the cousins in Springfield.  In all my 16 years since moving away I've never had a desire to move back and this time wasn't any different.  However, I am already looking forward to the next opportunity we will have to visit.  hopefully next year again instead of waiting two years between visits like we have traditionally.

Our week there was by far the most enjoyable time in Springfield since I was in college.  We packed up our stuff and hit the road!  next stop... Tennessee!

Great collection of pictures! So glad to share in the new adventures with you and family. We sure did make lots of memories. The twins are doing so well in their interactions with the extended family. I'm very happy that Kendra enjoys cooking and helped a great deal in the preparation of the various meals. What a blessing! Love ya gobs, MOM