Hey Everybody it's me, Mickey Mouse!  OK, maybe not THE Mickey Mouse, but I've been in his house!  Before we get to those pics we'll continue the tour of the happiest vacation on Earth.  Ouma and Layla were being themselves with singing and dancing through the park. 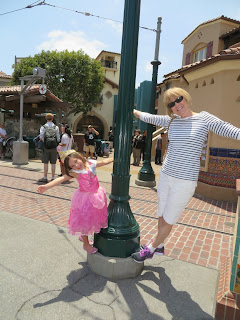 Layla always has a song in her heart and a spring in her step (except during tantrums).  I can see where she gets it from.

When Easton and Layla were convinced we would ride in a non-spinning ferris wheel car they were excited to go up high. 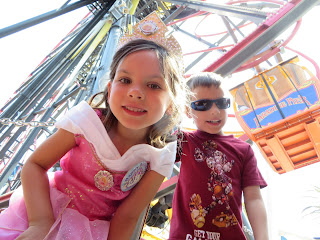 The Asian mother and two children across from us were emotionless and speechless the entire time.  I held out my camera and asked her to take our picture. Then she gave me hers and I returned the favor.  Luckily the sights and excitement of Easton and Layla's first ferris wheel ride overcame the nonexistent conversation and expression from our fellow riders. 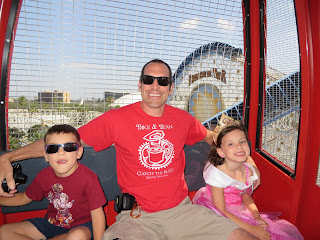 They bragged to each other after we exited the ride in the same way a mountain climber discusses his or her achievement after accomplishing a great feat.  One step at a time!  Today it's conquering Mickey's ferris wheel.  Tomorrow who knows? 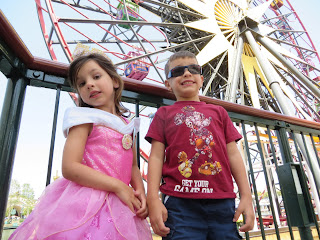 Each morning began with a mad dash through the early morning magic crowd to hit the popular rides first.  We arranged our schedule around the Disney parade and Pixar parade.  This next picture captures the wonder of taking first-time visitors to Disneyland. Probably my favorite of the lot.  Layla was overjoyed with each new float making its way through the crowds. 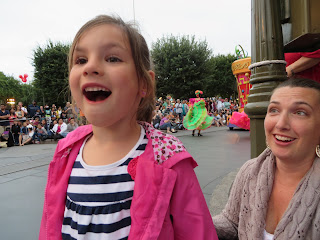 Kendra and I shared a few special moments during the week.  We saw the fireworks display by ourselves.  The alone time was highly coveted and very well worth the extra effort to go back into the masses.  We were in the hotel room hanging out and I urged her to consider going to see the fireworks.  We both came up with excuses of being tired and old, but then I made some passive-aggressive comments about how there will be sleep enough in the grave and that we are not old.  I'm glad we went because those opportunities, while maybe not once in a lifetime, are certainly rare.

We arrived early and waited in the sea of people because we wanted a good view of the World of Color show.  The show occurred way past Easton and Layla's bedtime, but I'm flexible and didn't mind pushing out the bedtime for such a special occasion.  I stood close to Kendra and wanted to capture the moment.  Most of the week was about the twins having the time of their lives.  Even though we had fun while focusing on the twins, we still made time for moments between just the two of us. 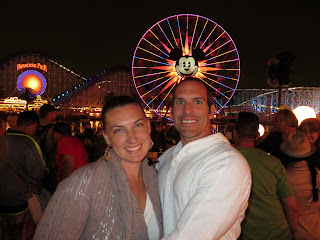 The World of Color show was amazing.  I watch with my mouth open thinking, "how did they do that?" the entire time.  The mist of water was used as a projection screen for actual movie clips from several Disney classics.  The scenes and colors and music accompanying them added a "wow" factor to the ho-hum water show that we've seen at the Bellagio. 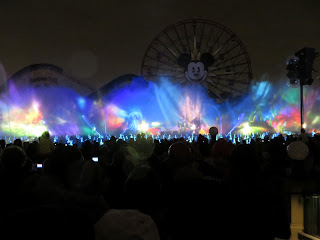 I have no idea how their little legs were still carrying them home after a full day of running around Disneyland, but they did great! 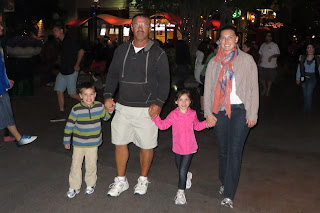 One of the reasons we waited to come to Disneyland until now is so that Easton and Layla could make the 42 inch height requirement.  I didn't realize rides have differing requirements.  Some were 40, some 42 and some were random numbers.  My perception of 42 being some magical height to unlock a mass of rides was incorrect.  Anyway, Each time the twins were on the fence they stood against the measuring stick and jumped with joy when they were told they could ride the ride. 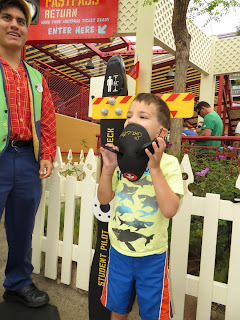 Goofy's flight school was Layla's favorite.  Short, fast, and not scarey.  The two of them sat together, which was a big grown-up thing to do in their minds. 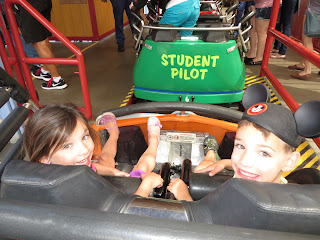 I have no idea why the Jellyfish ride was one of their favorites, but it was.  The cart slowly ascended a few stories, then gracefully dropped.  Seemed like only 20 seconds worth of a ride though.  up, down, up, down, done.  As long as they enjoyed the ride, then it was worth the wait in line. 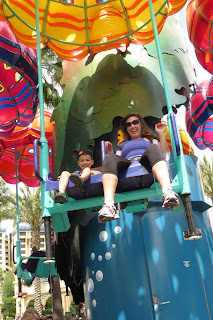 Layla milked her time with Oupa as much as possible.  He was more than willing to carry her on occasion and give her lots of Oupa hugs. 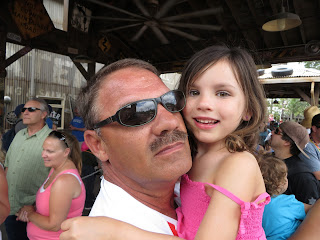 The Mater Tractor ride was similar to the Teacups, but slightly more of a whiplash effect as the cart swung free behind the tractors.  I didn't care for it much, but Easton and Layla smiled and cheered the whole time. 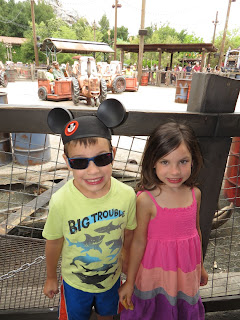 Driving bumper cars is an amusement park must-do.  We chose the P.T. Flea circus pill bugs arena for the occasion.  Ouma and Layla maneuvered around the course like pros. 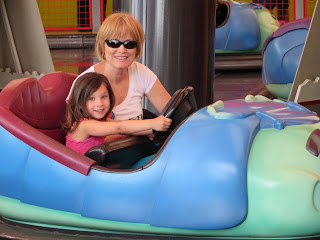 Oupa and Easton drove like heat seeking missiles towards Ouma and Layla's bug car...  and hit them.  Just like boys, huh!  I would have done the same thing.  Glad he had a good driving lesson.  The first of many with Oupa, I hope. 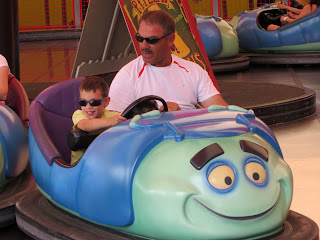 The Bug's Land section of the park was the least impressive to me because it was completely geared towards little kids and didn't have the grandeur or magic of the other sections in the park.  Even so, the twins completely enjoyed the rides and work put into making the ambiance reflect the movie. 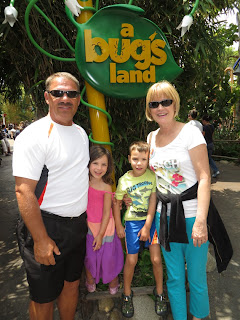 We were the first people in line to see the afternoon Aladdin show.  As a reward we had the best seats in the house on the top level, middle, front by the railing.  The show was entertaining to say the least.  I'm not much for plays and musicals, but this was very well done in the quality you would expect of a Disney production. 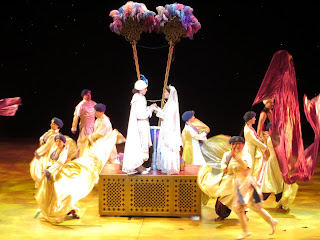 I have several more stories to tell and pictures to share so I'll save those for one final Disneyland related wrap-up post.