First things first.  Kendra's birthday was, in fact, happy according to our bedtime discussion.  I love her with all my heart.  She is my teammate and best friend who I would be lost without.  We went out for dinner tonight and were glad to have my brother join us.  We've never had the opportunity to spend her birthday with my family before so this evening out with him was icing on the cake. 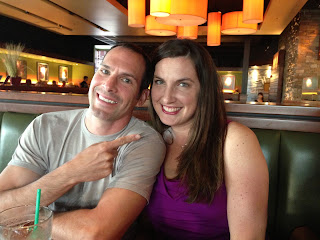 The greatest, longest vacation in the history of the 4 Webbs is in full swing right now.  It's been over 30 days since I was last at work.  I sleep in almost every day and have no idea what day of the week it is.  Sounds a lot like a retired person, from what I understand, right?

Our time in Springfield is intently focused on being with my family.  Layla, Daphne, and Lexi are within 6 months of each other in age.  The cousin bonds were quickly established even though these three haven't played together in a memorable way ever before. 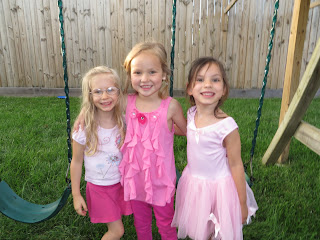 The weather is park-perfect with a little wind so we've been outside as much as possible. 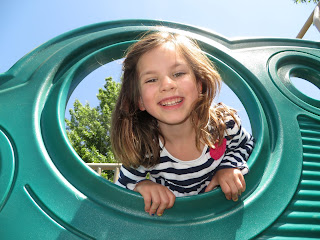 Easton's biggest enjoyment is from getting to know Silas and Eli, his two cousins.  We are both very pleased with how much he has interacted with them. 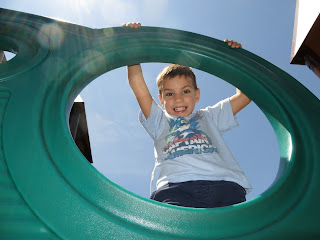 Silas and Eli are 10 and 12 so the age difference is really pronounced, but not as a detraction from their relationship.  Easton seeing how these two cousins are friendly, gentlemanly, and adventurous has been an enlightening experience.  The group posed in front of a flower display with the butterfly enclosure behind them. 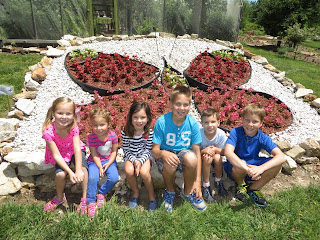 we were allowed to tour the butterfly enclosure where the kids saw caterpillars, foliage, and a variety of butterflies.  They even saw a butterfly lay eggs on a leaf!

The park was huge with several walk-through gardens and even a gazebo. 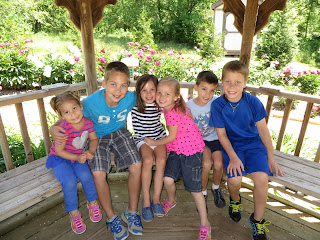 We took the scenic opportunity to capture a picture of the four of us together because photographer Joanie was around to take a good one. 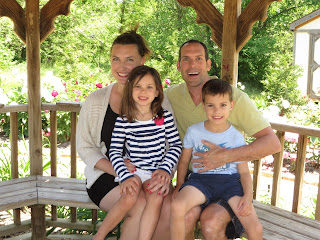 We walked a little further across a bridge and looked at the creek below.  I recommended the kids take off their shoes and wade in.  We don't have any place to do this in Phoenix so I encouraged the adventure.  Everyone gladly joined in the shoeless, refreshing creek walk. 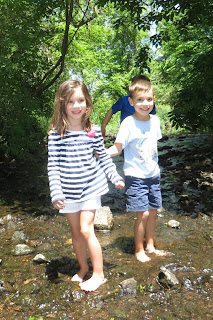 I joined them as well because that's what involved dads do.  We find what our kids are interested in and do that with them.  I know, it's a novel concept... 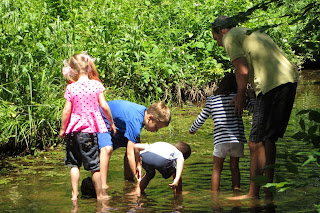 Silas is quite the outdoorsman.  He had our crew hunting for crawdads in no time!  He showed us how to turn over the big rocks, looks for the claws, and trap them with our hands.  The twins weren't skilled enough this time to trap our own, but they thought it was the coolest thing ever to just hold the ones he caught. 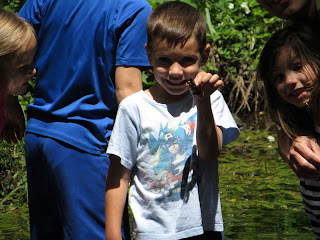 The rocks were a little jagged, which made walking around a little painful for these Arizona, flip-flop wearing pansies. 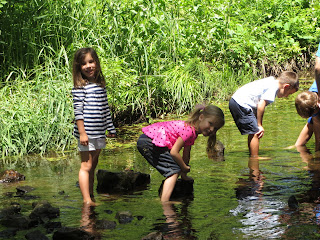 Silas brought one to shore for Layla to hold and inspect.  She had no issues holding the critter as its tail flipped around. 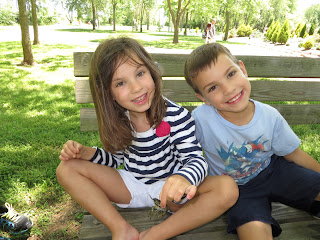 One of the things I miss about living in Springfield is Andy's frozen custard.  They make the most delicious ice cream in the world.  My family gladly joins me on my quest to eat it everyday possible.  Andy's is a side-benefit to spending time with my Mom and Dad. 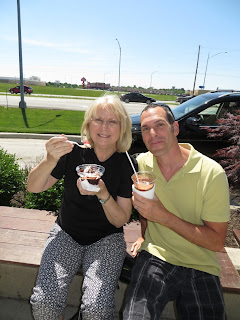 The twins are also beneficiaries to the frequent trips to Andy's.  Since they get more on their face than in their mouth and we are on vacation I let a lot of this abnormal stuff slide. 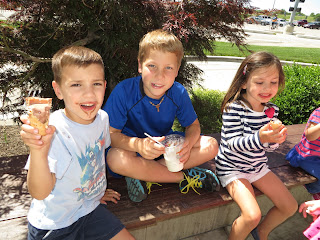 We cheered for Silas at his baseball game.  Kendra and I watched as the girls turned into Silas' cheerleading squad.  when he wasn't up to bat the girls played under a big blanket.  They stopped just long enough for me to catch this picture and then they went back to giggling and playing. 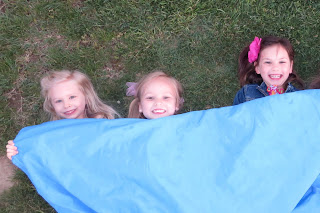 We had more quality time with Lexi than I expected given the circumstances.  I was pleasantly surprised and satisfied by the time spent with cousins as well as with BJ and Joanie.  The twins played with Lexi by jumping between the huge hot tub, the pool, and the splash pad with a water umbrella. 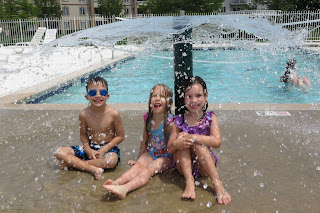 Easton and Layla stayed the night at Joanie's house.  That was an odd experience.  Kendra and I went to bed totally at peace and comfortable not knowing anything about what they were doing or where they were.  As long as they were at Joanie's house, then everything was fine.  With the three princesses we knew she was taken care of and having the time of her life. 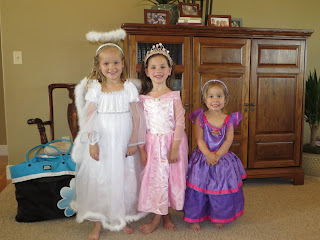 The boys had a living room campout set up for bedtime, but not before Easton was treated to a Lego and Star Wars filled evening. 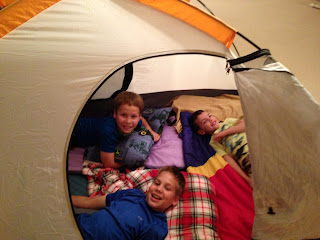 The next morning Kendra and I woke up on our own without a single giggle or cuddle or cry from the twins.  It was very pleasant to say the least.  Yes, we missed them, but having a night and following morning away from the twins was one of the many highlights of our Missouri trip.

I'm still 5 days behind in blogging, but I'll catch up with daily posts for the next few days as we hit the road again.  Here's one last picture I really treasure of the twin with Joanie's kids.  The only cousin missing is Lexi! 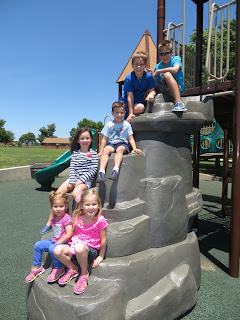 See you soon,
Bronson
Posted by The Four Webbs at 10:46 PM