We arrived into Springfield without a plan except to be with family.  Then we realized we would be competing with Memorial Day weekend traffic for anything we do starting Friday.  As we talked through potential outings we decided Branson was high on the list because of the plethora of possibilities.  We headed South and had the most extraordinary single day in a long time.

Pappa wanted to bless Easton and Layla with a gift so we went to this place called Ride Makerz.  The idea is to build a toy car with a variety of options.  Easton's eyes fixed on the Spiderman car body and the rest fell into place.  I enjoyed watching Easton express his opinions and desires about making choices.  His confidence in knowing what he wanted made me proud.  The lights and sounds and quality are impressive.  The store assistant loaded all the parts on the building platform and helped him snap all the parts into place. 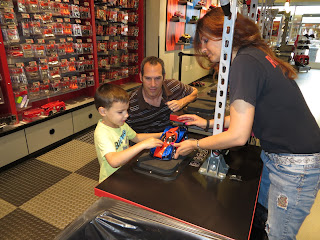 Easton beamed with smiles as the spotlight focused on him. 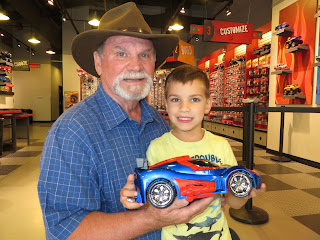 Layla had a tough time not jumping in with Easton as he chose parts and built his car.  She wanted to badly to share in his experience.  Not for selfish reasons, but because she likes encouraging others in their moments of happiness.

After Easton's car was safely stored in the box garage and ready for carrying we walked across the street to Build-a-bear.  Layla walked by these stores with longing in her eyes since she was old enough to walk.  Every time we pass one she asked to go build a bear.  She finally got her wish this day.  First stop was to choose which bear she would build, which turned out not to be a bear at all. She chose the My Little Pony. 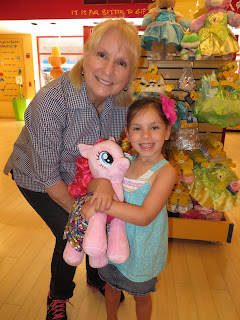 The interactive nature of building the stuffed pony really made for a memorable experience.  She's been hugging Pinkie Pie ever since. 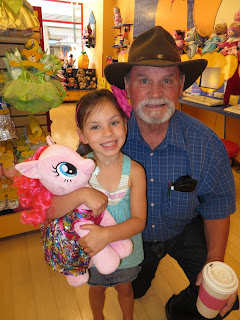 We took a stroll through the Branson area by lake Teneycomo.  The near-perfect weather is providing many opportunities for these moments.  Here's a picture of the twins with their gifts by the waterfront. 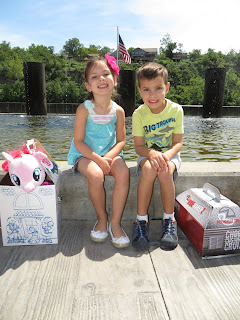 It was a treat having Nana and Papa all to ourselves for the day. 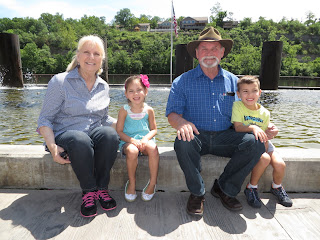 For lunch we ate at Joe's crab shack where bibs are given to those who eat crab legs.  The waitress wrote titles on our bibs.  Easton was Prince Crabby and I was Crabby Daddy. 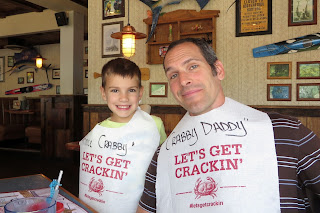 Of course, Layla was Princess Crabby!  Kendra isn't allowing me to post certain pictures of her because some don't turn out as flattering as she likes. 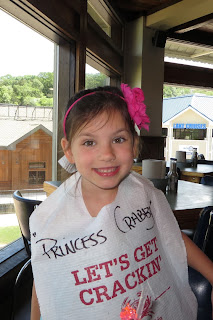 Just when we thought the day couldn't get more interesting we drove to Adventure Ziplines where the four Webbs experienced the adventure of a lifetime.  We suited up for a zipline tour where we sped through the air across seven zip lines.  We went tandem where the twins were strapped to us. The picture is blurry because we were speeding along at 40-50 mph, but you get the idea of how we were tethered. 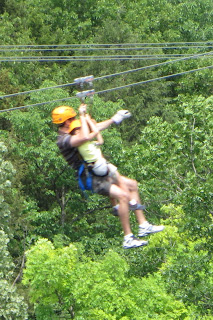 The is the most adventurous event we've ever done as a family.  Was it dangerous?   Maybe, but safety precautions were plentiful.  During the first run I was a little worried and fretful, but after we successfully didn't die or fall I felt at ease.  That is, until we had to climb the giant tower... 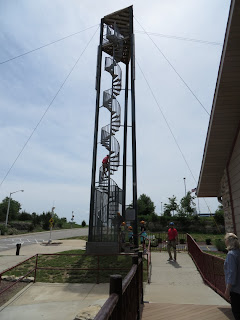 I wasn't scared, but Easton and Layla hesitated.  Kendra and I just smiled and confidently described how easy it would be to go up there.  Felt like it took forever as we wrapped around and around, but we made it to the top and kept on zipping!

I'm finding it difficult to put into words how impressed and proud I was for Easton and Layla's willingness and desire to do this.  They were awesome.  As we stepped off the platform we would scream and shout kid-friendly expletives as if we were riding a roller coaster. 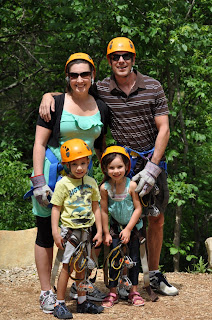 On the last zipline the tour guides offered Easton and Layla the opportunity to go solo.  I held my breath and looked at their faces to gauge reaction and desire.  To my surprise their face lit up with interest and they both said something like, "Yea! let's do it!"  So here is tarzan swinging from the trees... solo. 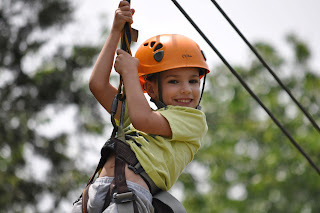 To put things in perspective, you can see us standing in the tower watching our big boy speed away down the line. 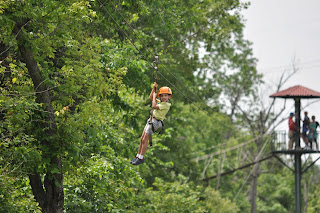 I went after Easton.  The guide showed us how to go upside down, so here's that little magic moment.  Here I am as Spiderman. 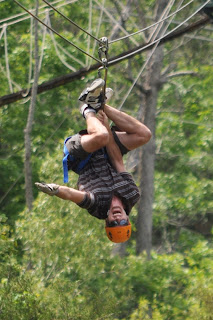 And one of me upright with the bug-plastered smile. 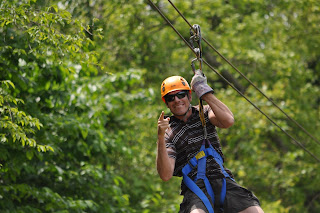 Layla went next.  I thought she might chicken out, but with me at the bottom and Kendra in the tower we cheered her on.  Watching her step off the tower with all the confidence and trust in the world made my heart swell. 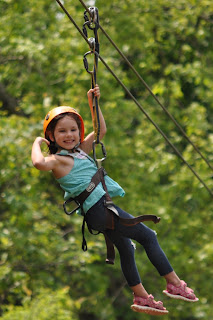 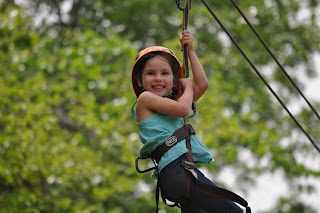 cute, cute, smiles.  All the way from the top to the stop.  Seems like a simple thing to just step off the tower and sit there, but trust me, it is very intimidating. 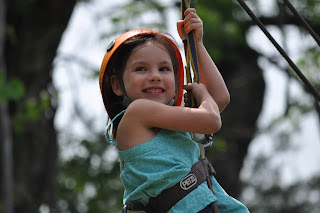 By this time Kendra was a pro and had no problem show-boating down the line.  She attempted Spiderman style, but this is the only picture she would allow me to post.  She is amazingly adventurous and I'm so happy we are teammates in parenting and best friends. 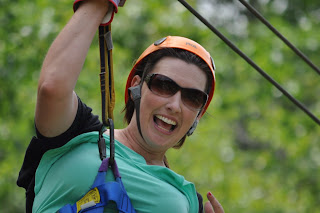 After completing the zipline tour we jumped in the van and rushed directly to the Acrobats of China theater show.  As if our day couldn't be more incredible already...  No photography was allowed so I didn't take any pictures, but it was an excellent show.  All of us (except Easton) clapped and joined the crowd in Ohhhhhs and awwwwwes throughout the performance.  Easton is not interested in the arts at all.  singing, dancing, performing, art work, and anything related to those things is off his radar and considered a waste of time.  But for the rest of us, it was a visual feast of feats of strength and balance.

Afterwards Layla wanted to meet the performers who didn't speak a bit of English.  This girl had some amazing acrobatic performances. 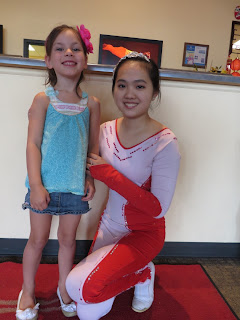 This next girl did a ballet performance with the guy standing next to her.  Layla loved the whole show, but the ballet was her favorite. 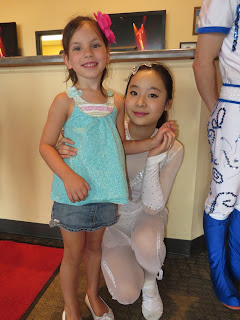 So there you have it.  By far the most action-packed day we've ever had.  The bar is set now for the number of different adventures a family can squeeze into a single day.  Any one of these events would be an entire day's worth of fun, but to put them back to back in a single day is beyond what I could have hoped for.  And then...  We spent the evening at Nana and Pappa's house with cousins.  Tree houses, swings, frisbees, and time together with family. 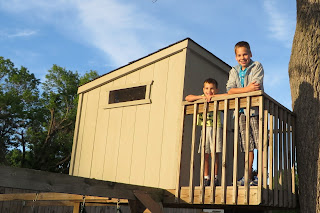 Luckily, we did all the out-of-town adventures before the Memorial Day holiday.  Now it's time to relax and just enjoy being around family every day.