I have a series of blog posts in draft mode and a LOT of catching up to do. This is the start of my blog blitz.  I'm planning for four posts in four days for the 4 Webbs.  starting... now.

Happy (early) Mother's Day to Kendra!  Guess what I gave her as a gift?  Nothing.  I mean... the gift of Nothing.

This blog post is written on my iPhone in a tent at the lake. Easton and Layla are sleeping peacefully on either side of me. The normal amenities of three pillows, a memory foam bed and regulated temperature are not a part of this adventure. Neither is Kendra.  The purpose of my trip is two-fold.  One reason is to have the longest Daddy date in our history (36 hours?) and the second is to give Kendra alone time at home.

We are mere days away from the highly anticipated Disneyland trip where we will drop a few thousand dollars. Because of that, Kendra and I agreed not to have an expensive Mother's Day gift or celebration.  This year I gave her something she hasn't had in over 5 years: Time alone in her house. No kids, no husband, no responsibilities.  She can do whatever she wants or nothing at all without answering to anyone or being responsible for anyone. It looks something like this:

I experience this every summer when I leave Kendra and the twins in Sacramento for a few days.  I wanted Kendra to enjoy the beauty of our absence.  Even when she goes on vacation it isn't the same because vacation involves sleeping in a strange bed and all the stress of travel.  I wanted Kendra to have the gift of nothingness!  Happy Mother's Day.

While planning this week I noticed the weather will be perfect for camping and I have a few days available mid-week.  After 24 hours of preparation and packing I headed out for the lake with Uno and Dos.  We stopped by In N Out for one last hot meal. The twins were grateful to share a shake because they don't usually get one.  They even attempted to feed each other at the same time, resulting in laughter and a messy table.

The campsite is about an hour from our house.  That explains why Phoenix has the most watercraft per capita of any city in the country.  I can go from my desert backyard to this in one hour: 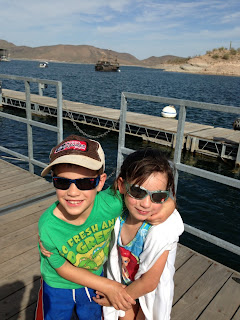 We setup camp without incident.  I single-handedly erected our tent, which I didn't know was even possible. 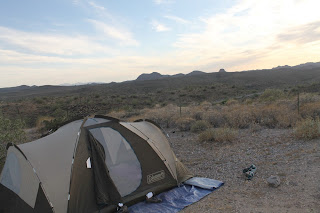 After camp was built we headed out to explore what the lake had to offer.  I found a marina and decided $400 for a boat rental was way, way out of our budget.  Instead we opted for the $23 self-propelled kayak.  It was a two man version, but it fit me and the twins just fine.  At first they were apprehensive, but the longer we were out there, the more they liked it.  By the end of the hour I was tired and they were asking to do it again the next day. 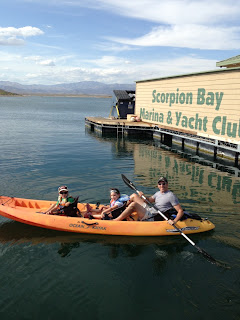 My favorite camp memory was the camp fire.  We built a fire together and I exposed them to the whole fire concept from tender and kindling to safety of the iron.  Layla's face was covered in ash and soot from this moment until we went swimming in the lake.  Easton doesn't appear to be as much of a pyromaniac as I was when I was a kid.  Good. 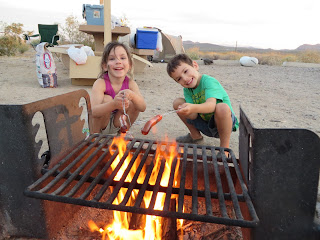 As the sun went down I gave them their first lesson in whittling. Safety first!  The pocket knife Easton has is one from my childhood.  It's a little over-sized and difficult to close, but it fits in his pocket!  Layla was more fascinated by the other bottle openers and screw drivers on her swiss army knife than whittling the wood. 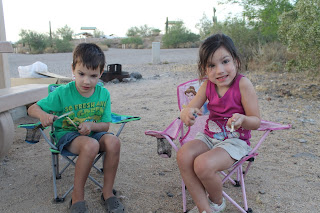 Our site made for a wonderful sunset to look for wildlife and reconnect with nature in way that can't be done in the fluorescent lights of cubical land at work. 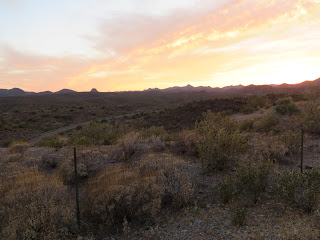 We planned for S'mores, but the chocolate bars melted because I didn't put them in the cooler.  Oops!  Oh well, the twins were happy 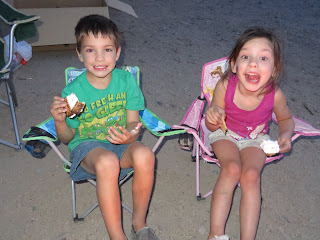 I ran out of battery life and energy so the mobile blog ends here.  The rest of this is written from the comfort of my own desk.

Sleeping in the tent was good for the twins, but not so good for me.  I restless and stressed because of the wild burro braying in the distance and the pack of coyotes that walked inches from my head through our camp.

I had hoped they would sleep in so I could too, but guess who was raring to go at 7:15 AM?  Yep, Big Time.  I was awake enough point my phone and take a picture to capture the moment.  He was dressed and coercing Layla and I out of our daze with a request for bagels and cream cheese. 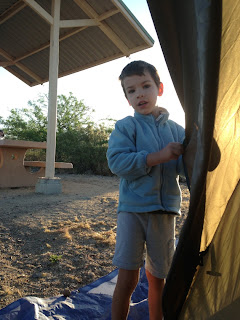 Our breakfast was quiet and chilly.  There was not a single person or tent within eyesight.  Our empty cul-de-sac of camp sites made for a great location to have some peace and quiet from the world. 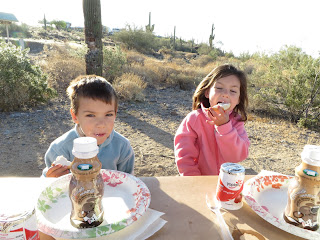 The park ranger gave us a map and explained the best places to hike.  We took a hike out to an area that is sometime an island and sometimes a peninsula depending on the water level. 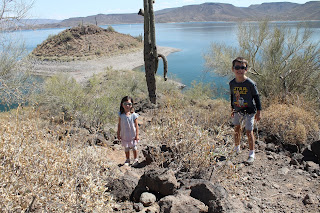 The flora and fauna were out in full display. Flowers and lizards were abundant! 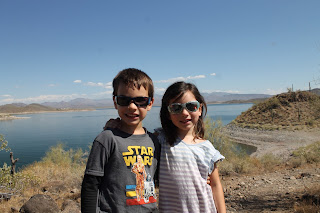 Because of our mid-week visit there were no people around to take our picture.  This is the best I could do... 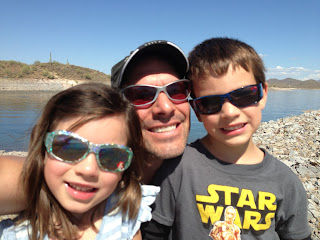 The day grew hot quickly so we headed straight to the water for some swimming fun.  I found an abandoned boat launch area.  Then gentle slope and smoothness of the road easing into the water was perfect for us. 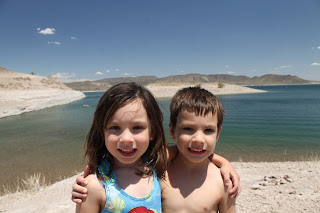 Layla is getting a little too good at posing.  Miss princess is always camera ready with a smile. 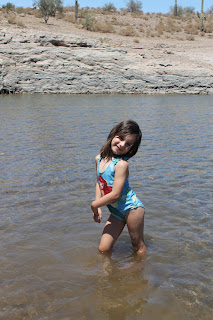 The water was about 70 degrees so we spent most of the morning knee-deep splashing around.  I attempted to explain rock skipping, but they are too young still.  They think I have some kind of superhero power and were very impressed with my rock skipping ability.  No big deal.  I don't mind the superhero status and there will be plenty of time for rock skipping lessons in the future. 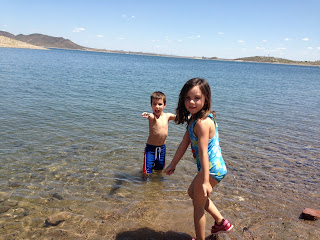 I intended to spend two nights there, but we only made it two days and one night.  I ran out of gas mid-day and cringed at the thought of being sniffed by a pack of coyotes for another night.  We were filthy dirty and tired, but fulfilled from the adventures we had together.

The three of us really missed Mommy.  I wish she were there to experience our camping, but it worked out great.  She had some alone time and I had days (instead of just hours) of focused, intense Daddy time.  As we drove away from our campsite Easton and Layla fell asleep within 5 minutes.  That's no exaggeration either.  These two, who only nap about 5 times per year, were out like a light!  Mission accomplished.

- Posted using BlogPress from my iPhone

Location:Roadrunner Loop 1,Sun City,United States
Posted by The Four Webbs at 10:26 AM

Camping is one of the best bonding times-according to Mr. Smalley who wrote many books about relationships. there's something about being in nature that calms and destresses us. The birds, trees and plants and even rocks bring us close to God's creation and helps us to connect with Him and each other without outside interruptions. Love ya gobs.

Yes, Mom, I agree there is something special about camping as a bonding experience. Having everyone out of their comfort zone and doing spontaneous things makes for memorable experiences.