Another week closer to the longest vacation of my life and we're sprinting to the finish.  The progress is most notable in our garage.  We've lived here for over a year and until last week we only made enough room in the four-car garage for one car to park.  I know, it's almost silly to think we are that unorganized and lazy to have such a problem months after moving into the house.  No matter, it is what it is and Kendra completed her refinishing job on the filing cabinet which we use as a night stand.  My goal this week is to do a home makeover comparison between the original pictures I took when we moved in and the latest and greatest.  Kendra did several projects to use what we had available to furnish the rooms.  Anyway, just planning and setting the stage for the next few days.

We are eeking out the last bits of spring weather by taking daily trips to the variety of parks nearby. 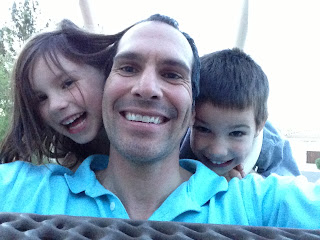 Easton's measure of my success as a father is based on whether I play with them at the park or not.  Occasionally I'll just let them interact with other kids and only jump in as referee when strange boys throw sand in their hair.  The twins much prefer when I play chase or Star Wars with them on the playground equipment though.

They can read!  The first book they learned to sight read is Hop on Pop.  That's a peculiar coincidence because they regularly  hop on pop for real as we rough-house and wrestle.  I keep trying to capture that in a picture or video, but it's difficult to film or photograph when the two spider monkeys are jumping from the top ropes of the couch and kneeing me in the stomach.  They are both very proud of their accomplishment as readers and we are even more proud because they achieved this (small) milestone so early in life. 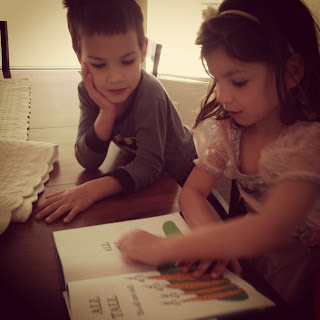 Part of the reason they love to read so much is because all do it so often.  By we I mean Kendra, me, and everybody else who hangs out at our house for any length of time.  Matthew came over for an evening to hang out with us for dinner.  As we were preparing the meal he helped calm the twins down for dinner time by reading the next chapter in Peter Pan. 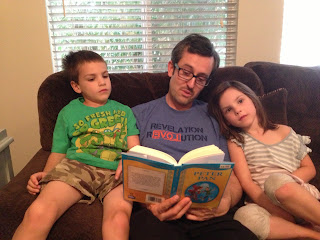 Did you know Wendy get's shot with an arrow and falls to the ground?  The movie doesn't show that, but the book does!

Easton isn't very excited to be on video so it's a rare occasion for him to perform, so to speak.  I captured this short clip of his Hop on Pop reading.


Layla has always been the creative type who loves to be called a great artist.  She beams with pride when I compliment her drawing abilities.  Her face looks a little less excited in the picture than she had in the moment because the sun was in her eyes.  I was impressed with her flower and the colors.  She's already a better artist than me!  I know that's not saying much, but I'm continually surprised by how creative she thinks and how well she's able to put the ideas on paper (or cement). 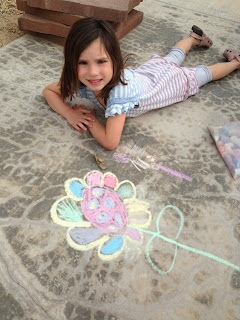 Unlike Easton, Layla loves to be on video.  She performed an improvisational dance to the Thomas O'Malley Cat song from Aristocats.  I'm absolutely certain this video will show up during her high school years.  She's awesome for so many reasons.  I stopped counting long ago...


Easton's interest in aerospace and flying things continues to increase.  He got introduced to Legos over the past few months and now he's able to follow instructions fairly well and build his own flying machines. 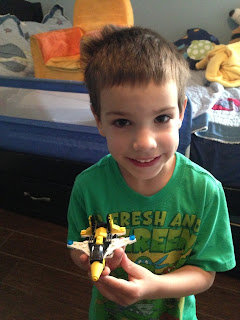 Easter is here and nothing makes Easton's day more than a postal-delivered card and chocolate.  He asked me to read it to him several times.  I could tell he was doing his best to memorize the words so he could sight read it. 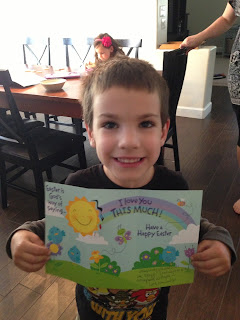 I surprised the twins with a new game.  One that shaped almost all of our generation X lives... Uno!  Come to find out, they already knew how to play from the church kids.  We also added Candyland to our repertoire of household games.  The official game night at the 4 Webb's house has yet to be declared, but soon we will have a weekly night dedicated to teaching (appropriate) competition, how to win gracefully (ahem, Layla) and lessons about how life isn't always fair or about winning.  Let the indoor games begin! 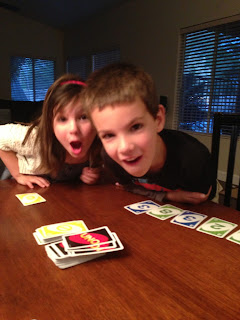 My mentoring group of 5 guys is going very well and we are through two month's worth of interactions, Bible memorization, book reading, and communication.  The next book is already loaded into the Kindle and the spine is broken, digitally speaking. 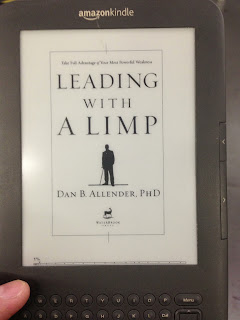 I'm only in the first chapter, but I can already tell this is going to be right up my alley.  My favorite chapter 1 quote is:  to the degree you face and name and deal with your failures as a leader, to that same extent you will create an environment conducive to growing and retaining productive and committed colleagues.

What has two thumbs and a permit to carry a concealed weapon?  This guy. 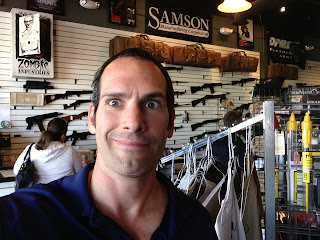 Yep, the state of Arizona has one less gun-ignorant citizen.  Now I know the laws for, proper handling of, and different types of guns.  I love this state.  Castle Doctrine is awesome.  I had a friend of mine send me a message as a result of my Facebook post about the gun safety class.  He asked, "Do you think Jesus would carry a gun?"  Ummmm...  I don't even know where to begin to address this level of stupidity.  So I didn't.  I learned a while ago that it's not my job to criticize others or change their minds about anything.  I resigned that job and gave it back to the rightful owner in Heaven.

Kendra is scheduled to attend next week's class and I'm looking forward to her feeling more comfortable about having a gun in the house.