Five years ago today my Uncle Dave passed away.  Does it feel like Easton and Layla are five years old? Yes! because I've been with them virtually every single day since they were conceived.  Does it feel like Uncle Dave's been gone for five years?  No way.  Seems extremely odd to even consider it's been that long, but it truly has been.  One of the benefits of living in this house is how I get to see Dave every day in it.  I spent the 13 years on and off making memories.  Every time I turn on a light switch we replaced together or hear the sound of ice cubes hitting the bottom of his plastic cups or pull into the carpet-covered driveway I think of him.

He could never take the place of my Dad, but he supplemented my up-bringing.  He believed in me, supported me, advised me, and taught me.  Since he left I've been alone in my indecision.  I know it's part of growing up and becoming a man, but I'll never get too old that I don't seek wise counsel.  Even the oldest man on the planet should be seeking wise counsel from those youngsters who are more expert than he in some area.

He was more than willing to call me out on my faults, but equally willing to be open with me about his.  I never saw him as "perfect".  If I did, I couldn't relate to him.  If he had tried to pretend to be perfect I would have rejected the relationship on grounds of lying and deceit.  Thankfully, he didn't accept my imperfections by condoning them, but he accepted me in spite of them.

I know... blah, blah, blah, now tell me about the little monkeys!  Their home-schooling skills are difficult to measure day-to-day, but their hearts and minds are growing in ways I can see.  Layla free-handed me a picture of her and I together.  Both smiling as we hold hands.  So what if I don't have eyes.  The fact that she perceives me as bigger than her, loving, and involved is all I care about. 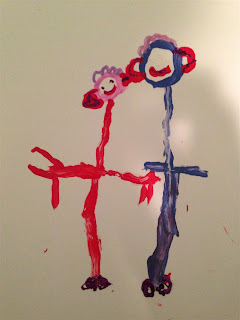 Dino Dan on the other hand isn't interested in imagination drawing.  He learned how to do a color-by-number project and his first request after finishing and posing for this picture was to hang it over his bed.  He takes pride in his work and completed the task to the best of his ability.  and he knows how to pronounce euoplocephalus (You-oh-ploe-seff-ah-luss) That's my boy... 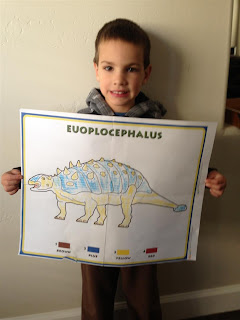 Easton also expresses interest in golf.  When I mentioned the idea of playing in the greenbelt his first request was to bring his clubs.  I'm doing my best to keep his basics fresh until Oupa has another chance to start up lessons again. 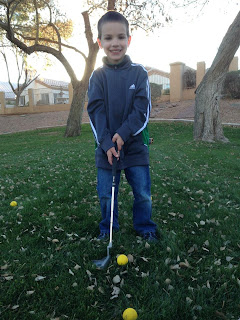 He's happy when he swings.  His natural smile is the sign of a boy who enjoys what he does and does what he enjoys.   Layla was off looking for bugs under the rocks because if she doesn't "get" something within the first few minutes it becomes laborious. 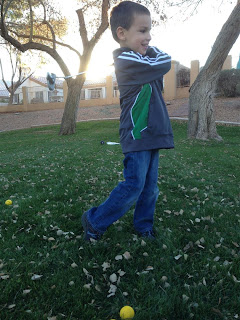 Conversely, I asked him to sing a few lines of the Peter Cottontail song which he and Layla both know.  He almost broke down in tears at the thought of performing alone in front of me alone.  No biggie.  I gave the stage to Layla and she sang it like the national anthem at a baseball game.

Our neighbors across the way fly the confederate flag.  I've GOT to get to know them better.  Those are the kind of neighbors you want to have as friends, not enemies. 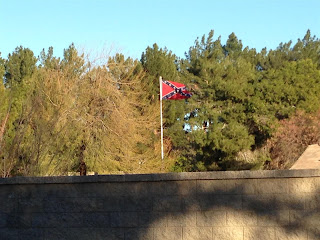 One morning I woke up at 3:30 AM and couldn't go back to sleep.  I sat in the living room working on my laptop.  Just like clockwork, at 7:15 Mr. Happy Sunshine came out of him room and cuddled with me on the couch for a bit.  Then, as if he's reading from a script every morning he says, "I'm hungry, Dad".  The two of us watched the sunrise through the bay window as we conversed over a bowl of Fruity Cheerios. 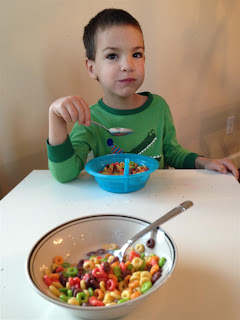 The girls slept in and we quietly enjoyed the morning together reading books and answering the never-ending questions from Easton's inquisitive mind.  I enjoy Easton at this age so much that I want him to be 5 forever.  If only...

Layla pulled out the aerobic steps and the weights.  She claimed they need to exercise like Mommy and Daddy.  She lifted the weight over her head and did a little dance followed by a one-legged pose.  She successfully combined Yoga, weight lifting, Zumba, and P90X all in one moment. 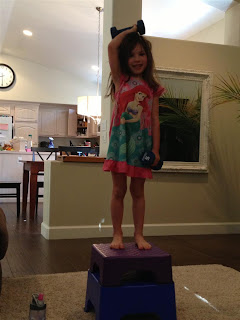 Easton wanted his turn.  As I've said before, all boys ask the question, "Do I have what it takes?" whenever they attempt something.  I cheered him on and congratulated him for lifting, not one, but two weights over his head in a military press.  I won't let him in the gym until he's 14 or so, but he's got a good start to a healthy workout routine. 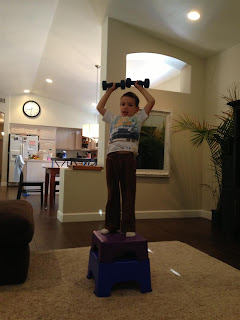 I can't get this iPhone picture to rotate, but as I was working at my desk one day the twins came in to hang out.  They stood around for a bit, then sat down, then eventually laid down.  I couldn't bore them enough to leave so I just took a picture instead. 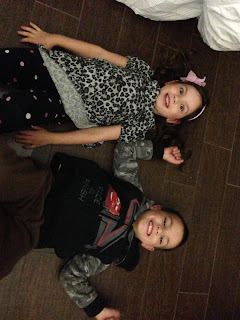 It's such a privilege to enjoy Easton and Layla.  Quality and quantity of time will continue to decrease as the years progress so I'm taking every opportunity to make sure I have no regrets.