The twins have a new twice-weekly playmate.  We decided to take Will, their old class mate, into our house during the day for the next few months.  His Mom knows us well and wants will to be in a loving environment with schooling discipline.  Kendra believes she can maintain the same level of learning growth for the twins and bring Will up to speed as well.  The extra few hundred dollars per month will offset some of Obama's tax increase and help us stay above water between now and my sabbatical.

I told Easton and Layla we get 10 million pennies per year (just for round numbers sake) and they were blown away.  They must think we're the richest people in the world now.  It's extra entertaining to watch them divide up change from my pocket.  all coins are equal in their eyes and the ones with ridges must be worth more, right?

Easton made a special request to have some boy's time with just us two.  I told him if he woke me up early the next morning that we'd go to breakfast together.  Just like clockwork he gave me the nose-to-nose wake up at 7:15.  We loaded up the car still wearing our morning breath and drove to the local breakfast greasy spoon.  He wanted pancakes.  I wanted him to learn to use a knife.  We both won. 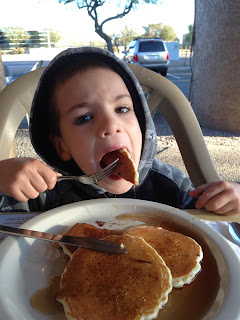 I've been stepping up the responsibility and risk taking slowly over the past few weeks.  I say something like, "You are five now and I know you can do it!"  They always prove me right and then act confidently proud as if they knew all along they could do it.

We ventured out beyond the greenbelt to the canal.  We saw big carp swimming, a couple of ducks landed in the water and seashells litter the edge for a few hundred yards.  We trotted along finding new things to investigate while joggers and bikers went by.  I put on Layla's Disney princess cape because they wanted me to be Darth Vader.  I also took the cap gun along because they wanted me to be Han Solo later.

The scene reenactments didn't take any audience into consideration.  The family that walked their dogs, the jogger, and the group of teenage boys all smiled and watched as they went by.  I don't mind wearing a pink cape or pretending to shoot the bad guys. 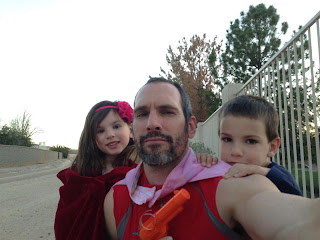 Having so much fun with Easton and Layla is worth way more than any pride I may feel to be "cool" to a bunch of strangers.  It's taken a long time for my imagination and play skills to come back, but luckily kids take a while to get to this stage of life.

Kendra and I are still spending every single spare second working on our message for Sunday.  As I reflected last night on other collaborative efforts I realized this is the most intense team work we've ever shared in our history.  Spending one or two nights together on a home project or something is about the extent of our collaboration.  I'm enjoying this way more than I (or Kendra) thought I would.  It's nice to pull towards a common goal and work hard on something together.

Only three more days until we get to share our story.  I'm not nervous about Kendra or how it will go.  My small amount of anxiety is because I understand the responsibility and magnitude of what we're taking on by standing in front of the church.   We're turning our marriage and struggles into an open book.  Vulnerability is scary, but without risk there is no reward.

The greatest compliment we could receive is for someone to say they were encouraged and hopeful about their own life after hearing about ours.

Praying for you today.You both will do great and I am anxious to know about your presentations. May God's Holy Spirit anointing be upon you. Love ya gobs, MOM

Well said Connie! They will be awesome!