I'm a Craigslist fanatic.  Easton and Layla are not interested in riding their bikes without training wheels.  I read somewhere not to force the issue, but I really want to get some more serious riding in with the twins.  The best option I could find was the Adams Trail-a-bike.  Retails for $225, but I'm not about to spend that kind of money for a one-wheel heavy trailer.  I searched on Craigslist for a few weeks and found a deal.  $50 for a used one that was in brand new condition except the hitch was missing.  I bought it and had the $20 part shipped to my house. Ta-da! 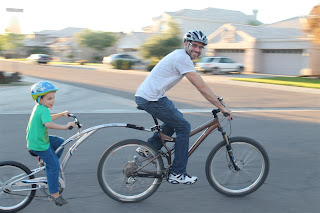 Easton was raring to go as soon as I clipped it on my bike.  Layla took some convincing, but once Easton excited screamed about how awesome it is, she was willing to give it a try. She said, "I'm a little nervous so stay on the sidewalk, OK?" 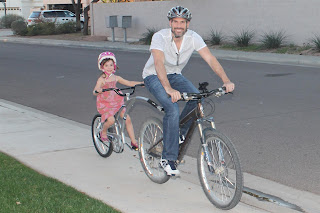 Easton wanted another turn around the neighborhood.  I think he's a mountain biker in the making. 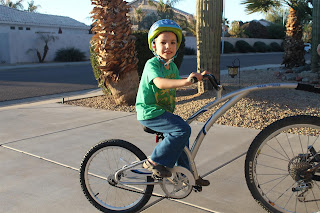 I can tell we're going to get plenty of use from the trailer.  I'm relieved we got such a good deal because after a couple of years of use I'll be able to sell it and make a few bucks.  I inherited a little bit of the Webb wheelin' and dealin' gene, but i'll never get to the level of my Dad. 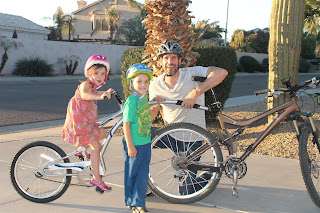 Easton's first sleep over was a success for him and for the other three Webbs. We slept in on Saturday morning because Easton wasn't there to be our first alarm clock at 7:15.  Talk about a major victory!  I took Layla for a Daddy date first thing after we woke up.  We rode to the local grocer where they have an outdoor eating area.  I brought a backpack full of breakfast and we shared a meal while enjoying the lovely outdoors.  She screamed with joy as we rode quickly down the path.  That was by far the fastest she's ever been on two wheels, but she's brave. 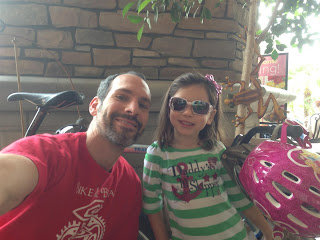 We were singing together and telling jokes back and forth.  A group of snowbird ladies from Kansas stopped by and struck up a conversation with us.  They said she was delightful and they were impressed with how sweet she is.  That's not just a proud Dad saying it!  A group of random ladies thought so much of her that they felt the need to stop by and brag on her themselves.

Easton's sleepover was successful because he didn't get injured and he had a blast.  His friend's dad said they stayed up late and wore each other out all morning playing. 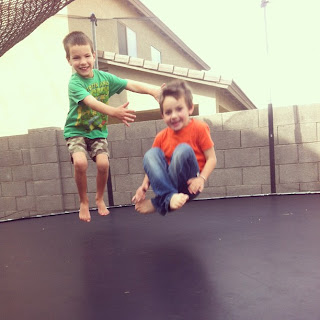 He took a nap this afternoon, which is extremely rare.  Even more odd was that he came into my room as I was posting stuff to sale on Craigslist.  He climbed up into my lap and just laid there comfortably.  I asked if he wanted to have some quiet time in my bed and he immediately walked over and crashed on my bed.

A few nights ago my longing for a fresh Krispy Kreme doughnut became so great that I packed up the twins and Kyle and drove 20 minutes to the closest one.  Easton likes Oreos almost as much as me so he chose the Oreo one straight away. 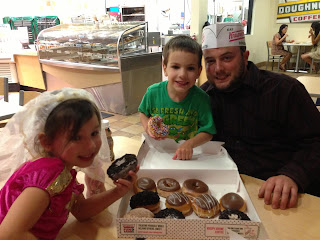 The hot, fresh light was on so we indulged in the cakey goodness.  Layla asked to wear her bridal veil and princess dress and princess shoes.  Everybody enjoyed her grand entrance to the store.  She won over the hearts of the cashier ladies and they gave us two fresh, free glazed doughnuts. 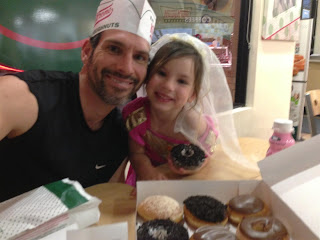 My craving is satisfied for another few months now.  I'm starting to get revved up for Andy's frozen custard in Missouri when we travel there this summer.  mmmm...  my mouth is watering just thinking about it.

Andy's has some new flavors that I'm sure you and kids will want to try when you come to visit us!
Love the deal you got on the bike behind the bike attachment! Yep, you're getting the hang of wheelin' and dealin' like dad. Love ya gobs, MOM

My mouth is already watering thinking about Andy's flavors and we can't wait to be there with the family. I'm hoping the bike attachment gets lots of miles!