We were blessed with blue skies for 5 of the 7 days we were in Seattle.  From what I understand that doesn't happen very often, but it happened for us!  Easton and Layla wore their jacket or sweater almost every day at some point.  Notice I used the singular form of jacket and sweater.  We only own one of these for each of the 4 Webbs because Phoenix doesn't have many opportunities to dress like this.

The lighthouse in the background is on Mukilteo Beach. 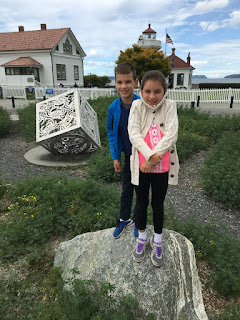 We took the extremely short, but worthwhile tour of the lighthouse.  You walk in, go up the stairs, walk around and ask questions of the lighthouse lady.  That thing behind us is made of glass and has a modern light bulb in it.  I learned that this lighthouse has a signal cadence of "on for 3 seconds, off for two seconds" so that ships passing by know where they are. 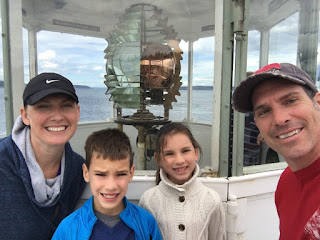 The staircase leading up to the light is steep and old.  So much history and usefulness here... 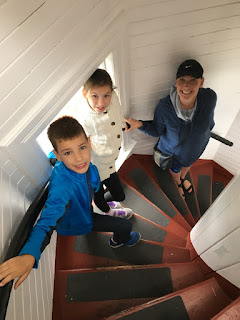 The boys and Layla went to the History of Flight museum.  Layla only joined us because we made her and she was bored the whole time.  Easton and I were interested and completely involved.  Oupa and Doyle were even more tuned in because Oupa loves history and Doyle loves planes.  We had a personal tour guide and I learned so much about history and planes.  All of the planes in the museum actually fly! 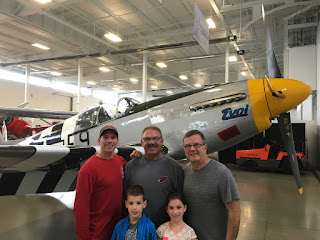 There were a couple of days in here where I was completely unproductive and it was perfectly awesome.  I didn't do anything for hours at a time.  This is a new, strange concept considering how my life has been for the past couple of years.

The twins woke up every morning like clockwork at 7:00 or so.  It's not like we were on vacation or anything?!  The part that made this OK is how Kendra and I slept in while Christy, Doyle, Ouma, and Oupa took care of them.  Plenty of arms to hug them and hands to help them with breakfast and all the things eight year olds need.

During one of our hikes we discovered a banana slug.  The biggest slug I've ever seen.  We had no salt, so no slugs were harmed in the taking of these pictures. 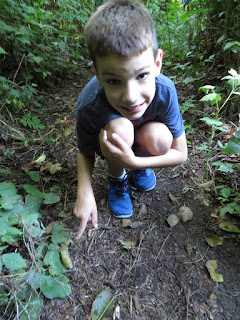 Christy's granddaughter, Evelyn, spent some time with our crew.  I was happy for the twins to experience cousin connection with a kid their age even though she isn't officially their cousin.  The most interesting part of the dynamic between Evelyn and the twins was that Easton got along with her better than Layla.  It was an odd experience for Layla to not be the main focus of Evelyns attention.  It was as if she couldn't understand how a girl could want to hang out with Easton more than her.  Anyway, the three of them played together very well and had some memorable adventures along the way.  We found a bridge where I wanted to capture the extraordinary green and woodsy feel of the trail. 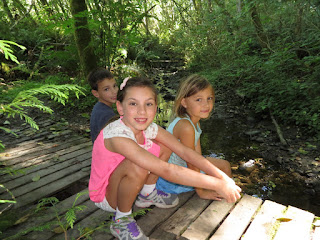 Kendra rested at home and Doyle worked while the rest of us went hiking.  The trail was steep in places, but everyone made it just fine. 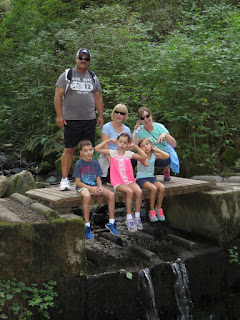 There was a moment where Oupa had to catch himself from stumbling over Easton and he moved Easton out of the way quickly.  Easton snapped at Oupa and didn't believe him when he said it wasn't on purpose or out of meanness.  I'm guessing Easton's had some bullies or half-friends at school be mean to him so he puts that projection on other people in his life.  Anyway, Oupa was gentle and direct in addressing Easton's disrespectful response.  It was a valuable moment to capture in a picture because many grandpas wouldn't take the time to seek connection over pride or ego, but our Oupa does and it's impressive. 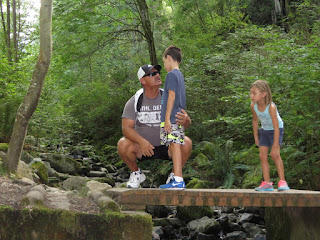 I was down in the mud and water with the kids as much as they wanted me to be.  Layla has experienced muddy lakes and polluted rivers.  This stream was the clearest, cleanest water she's ever seen.  Some people take that for granted, but to someone like Layla who's not used to it, she felt it important enough to show me. 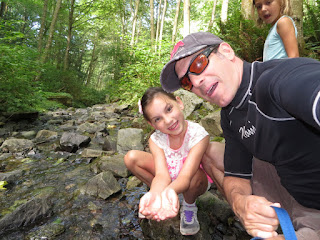 One of the many highlights of our vacation was visiting GGMa's house.  She is Christy's mom and I'll always remember her as the lady who sings prophetically and has the most amazing backyard view I've ever seen.  She also has a little shed in her backyard called the "mouse house".  I don't know who named it, but it fits very well.  This is GGma with the twins and evelyn inside.  She made them snacks and they had the best time inside their own little world. 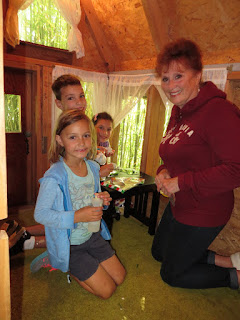 This is an outside picture of the mouse house.  It looks a little creepy in this picture, but in real life it looks very inviting.  Many of the man-made things in Seattle are tucked away, hidden among a bunch of trees. 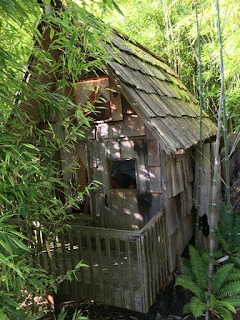 I took a bunch of pictures from the deck of GGMa's backyard because it isn't often we get a background this special.  I noticed in Ouma's house and Christy's house that there are very few pictures of the four of them together so here's a good one I will print and frame for them. 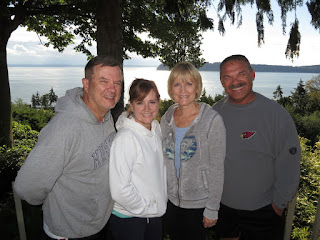 The best way I can describe the relaxed, friendly atmosphere of our Seattle vacation is this: 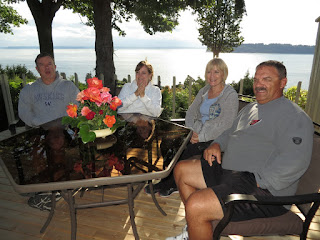 So much of our time was wisely spent chatting about past adventures, God, and current events.  There have been many situations in the past where I spend a few days with some people and never really get to know them or share life.  This week I was blessed to really get to know them... and Ouma and Oupa even better. 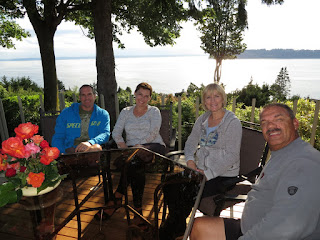 Easton and Layla and Kendra together in one moment; My world, captured in a single picture.  If I can be the best husband and father, then my life will be considered a success.  There were moments last year when we didn't know if these moments would ever happen again.  Seeing her sitting upright at the table supporting the twins as they hang on her is a little thing to most people.  not even noticeable or worthy of a mention.  but for us it is a huge expression of how well she has recovered.  I am thankful. 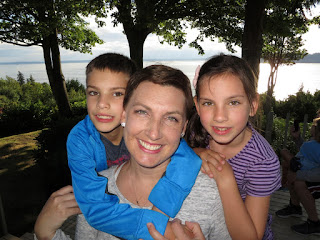 Christy, Ouma, and Kendra together in oneshot.  there weren't too many of these taken because they were all busy playing with the twins, resting, having alone time, and going on their own adventures. 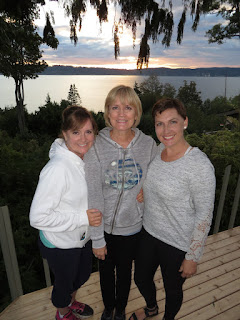 I took this panarama shot of the scene, but as you can imagine there is no way to do it justice.

I'm writing all of this after the vacation is over because we were fully disconnected from responsibilities, work, communications, and everything else.  Each day brought it's own excitement and outings.  there was very little time to be bored or to blog.  Whatever free time or down time I had was spent reading books and staring thoughtfully out the window.  That was perfect.  :)