We are loving the NorCal summer life as I continue to work the weeks away and the other 3 Webbs get to soak in the summer vacation.  No school, no figure skating lessons, no Taekwondo, no flag football...  The most noticeable aspect of our lives is what is absent.  We are finding the pause button for just a while before the busy life begins again in a few weeks.  I took a picture of the twins on Rainbow Bridge when they were three years old and then I recreate it again each year since then.  Here is the original. 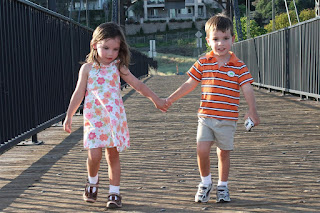 and here is this year's version.  It's the craziest emotion to see them so transformed into big kids or youth right before my eyes.  It feels as though they were three years old, then I blinked, and they are eight. 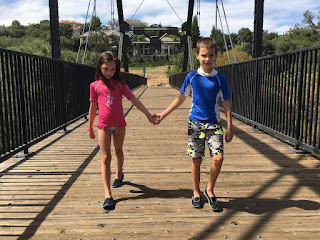 Even though I have over 5,000 pictures per year of our adventures, it doesn't feel like that much time has past. My photos and blog posts are a reminder to me that I'm not missing out on one bit of their childhood;  It's just going by very quickly.  There are times to be a dad and be present in the moment, like when I do silly things like this around them: 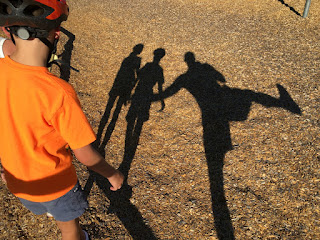 A father either makes these memories or he regrets not spending enough time being present with his kids.  I've never heard a father say he regrets spending so much time with his kids while they were growing up.  never.  But I have heard several fathers wish they had been more involved with their kids.  I am not the way I am because I'm scared to have regrets.  I am this way because I have a clear vision of my priorities and lots of examples of people who did well and not-so-well with managing their own priorities.

The 4 Webbs, Ouma, Oupa, and GG all drove to the A's game to watch them play.  No they didn't win, but that wasn't the measure of success for our trip.  On the drive there I tried on Kendra's sunglasses while the twins acted embarrassed for me.  As if I care what other motorist on the freeway think about me wearing these while looking ridiculous... 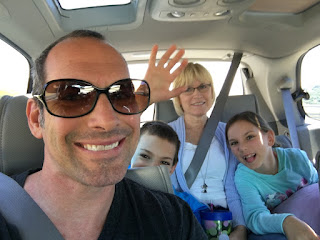 I brought a surprise in my cargo pants pockets for the twins.  I gave them each their own bag of Big League Chew and told them they could eat the whole thing during the game.  They opened the bag and were totally confused about what to do with the stringy strips of chewing gum.  Uncle Casey and Barbie met us at the game.  He was more than willing to show the twins how to properly eat the gum. 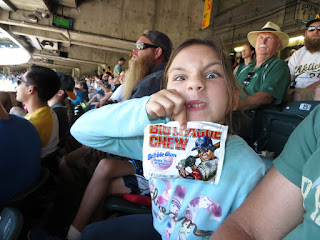 Easton was more interested in exploring the stadium and getting answers to questions about the design of the building than he was about the playing of the game.  I took him around to the radical fan section where they beat the drums and hang flags over the side.  We stayed here through the 7th inning stretch to sing our lungs out with the nut jobs. 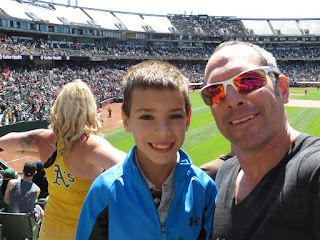 One of my highlights of the day was seeing this.  GG, Ouma, Kendra, and Layla...  Four generations of lovely ladies and Oakland A's fans.  There are not many girls who can say then went to an MLB game with their mom, grandma, and great grandma.  Layla is one of the proud few who have this privilege. 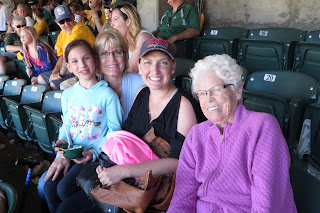