We're cold and loving every minute of it.  This day we rode on a ferry for the first time and played on the beach most of the day  All 4 Webbs plus Max were traveling on a boat in the ocean. 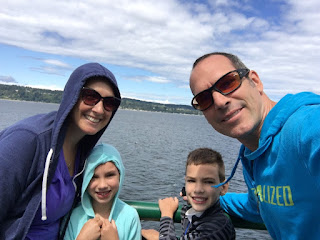 Max behaved so well on the short trip to Whidbey island.  He had no idea he was in for the best day of his dog life on the beach. 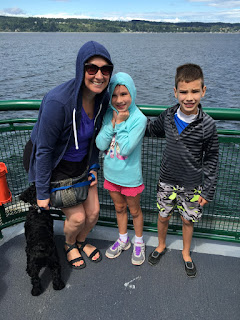 When we arrived it was still windy and chilly, but we were prepared with layers and hoods.  The coolness of the air temperature and the water had very little effect on the twins and their desire to play.  Beach buckets and shovels were the tools of the day. 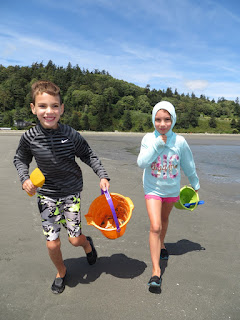 This picture is priceless for me.  I smiled from ear to ear while watching Kendra trot along in the water along with the twins and Max.  This is a miracle considering Kendra's condition a year ago.  I will never get over or get used to the blessed reality of the life being poured out on our family. 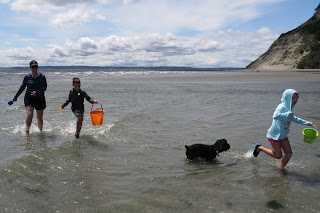 You have never seen joy until you've seen a dog running on the beach.  Max found a playmate and they chased each other through the waves like a couple of best buddies.  His legs are substantially shorter than the husky dog so it was completely unfair, but Max played along just the same. 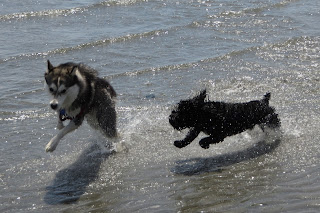 Ouma and Oupa sat on a log observing the play time.  They had no desire to get soaked and cold like the twins, but I'm glad they were able to experience this together with the 4 Webbs. 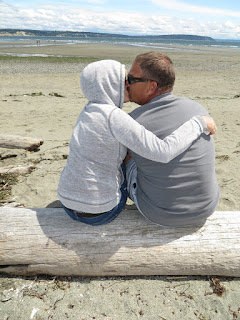 I captured dozens of pics from our day, but only a few of these made the highlight reel.  There was so much rich content that it was as easy as point and shoot and viola!  awesome pics...  Layla chasing after Easton out towards the waves in the extremely long beach. 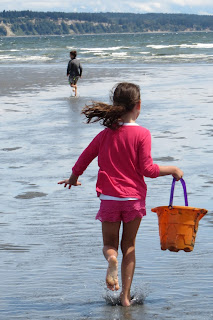 Easton went out further than any of us.  He was the least scared of sharks even though we could all see the bottom and the beach was very shallow even a hundred yards out. 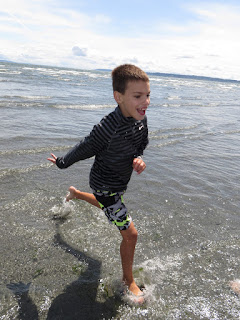 They had to pretend to be running in from the waves just for a rush of scared.  Max was more than happy to join them in romping through the waves.  His floppy ears drug through the water as his stubby legs hopped over the tiny waves. 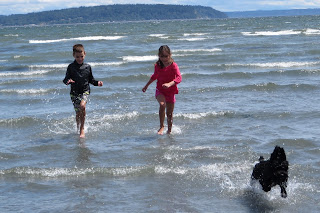 Some bored people tied together driftwood with twine.  It is a massive pretend pirate ship with a second level, a ladder, and a lookout.  Easton could have played here for hours if we weren't having so much fun out in the water. 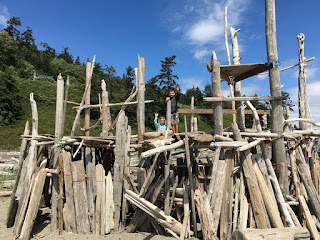 Kendra still has a lot of stress and tightness of muscles in her shoulders and legs and back, but she is feeling good enough to jog with Max on the beach and interact with the twins in a playful way.  It's difficult to describe how much I'm still appreciative and grateful for these simple moments with her. 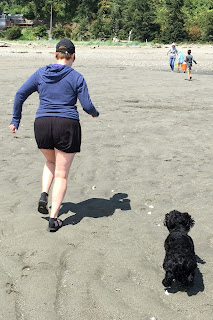 I had no idea what to expect with regards to seafood and the Seattle area.  I didn't know if there are places where I can get crabs or oysters or clams straight from the ocean.  Apparently there are ways to do it, but none of them are cheap nor easy.  For that reason we settled with finding a few dead crabs on the beach and throwing them back for the seagulls.  I learned many things this trip about how we interact with the ocean and what's really involved in eating seafood. 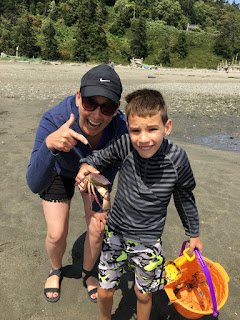 We ended the day on a date night with April and Jason while the kids stayed home with Ouma and Oupa.  These are excellent days where we have all kinds of adventures and fun with the six of us and Christy and Doyle, but then get a break and adult time with just Kendra and I.  The best of both worlds...