These past few days have tried my patience in ways I never thought possible.  Kendra's journey through cancer treatment has been one gigantic unknown waiting period after another.
The good: the nurse confirmed that Kendra is done with chemotherapy unless the PET scan results lead to another round. Also, Her PET scan completed according to plan.
The bad:  The doctor was supposed to get the results and call us today but that didn't happen because the results didn't get released for her to review them yet.  I took the day off work to be with Kendra when the big call came in, but it never did.
The ugly:  Kendra's hemoglobin is so low from chemo that she will have to get a blood transfusion. She is pale, with fever like symptoms and fatigue like she's never been before.
Even with all of this going on we still had a great time together today and laughed several times today. The smiles are real and we are both in good spirits. 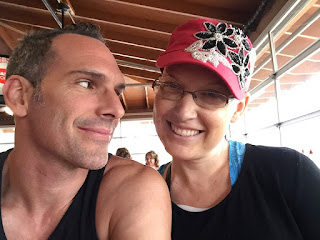 Kendra was craving pulled pork so that's what we ate because as a chemo patient it is recommended that whatever sounds tasty and you won't throw up, eat that.
Afterwards we went outside quickly to our car where we drove to her doctor appointment in the haboob.  See the big cloud of brown behind Kendra?  We drove through it.  We joked about a possible book title for our journey...  We would call it, "Into the haboob". 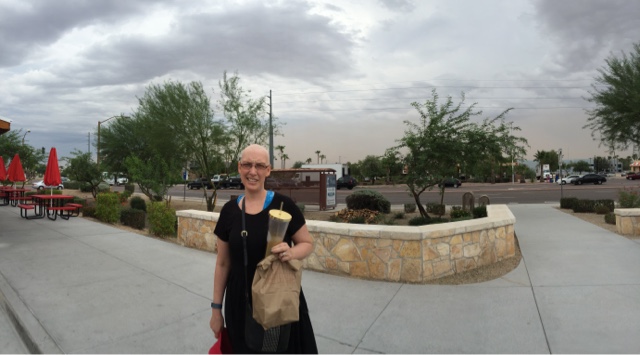 We have both become very good at surrendering. There isn't a single thing we can do to with our human strength or will power to overcome the physical struggles her body is going through.
However, Easton is getting his first taste of fighting and he loved it.   He's been going to Taekwondo  for a couple of months and recently made the leap from $32 Groupon to an annual membership cost.  Included in his joining of the club he gets all the gear including combat gloves for sparring and practice. 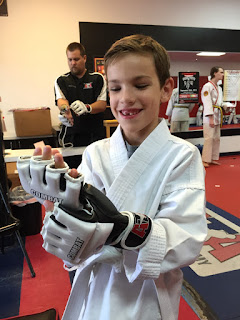 Today he earned his first belt, the orange belt.  He performed his form in front of the leaders, did some practice moves and broke some boards. 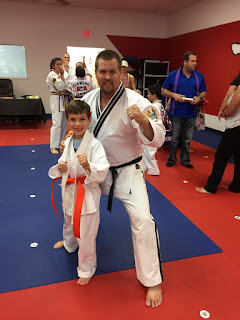 Layla watched the whole thing with me with cheering and encouragement for Easton.  He tries to convince her to join him in his quest for a black belt in martial arts but she declined saying "that's YOUR thing.  Mine is figure skating." 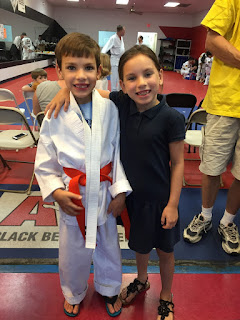 We pared down the list of extracurricular activities for now. No piano lessons, no soccer, no competition swimming...  Just martial arts for Easton and figure skating for Layla.  They are both excelling at their sport and doing well in school. Can't ask for more than that especially during this season.
See you soon!
Posted by The Four Webbs at 11:52 PM